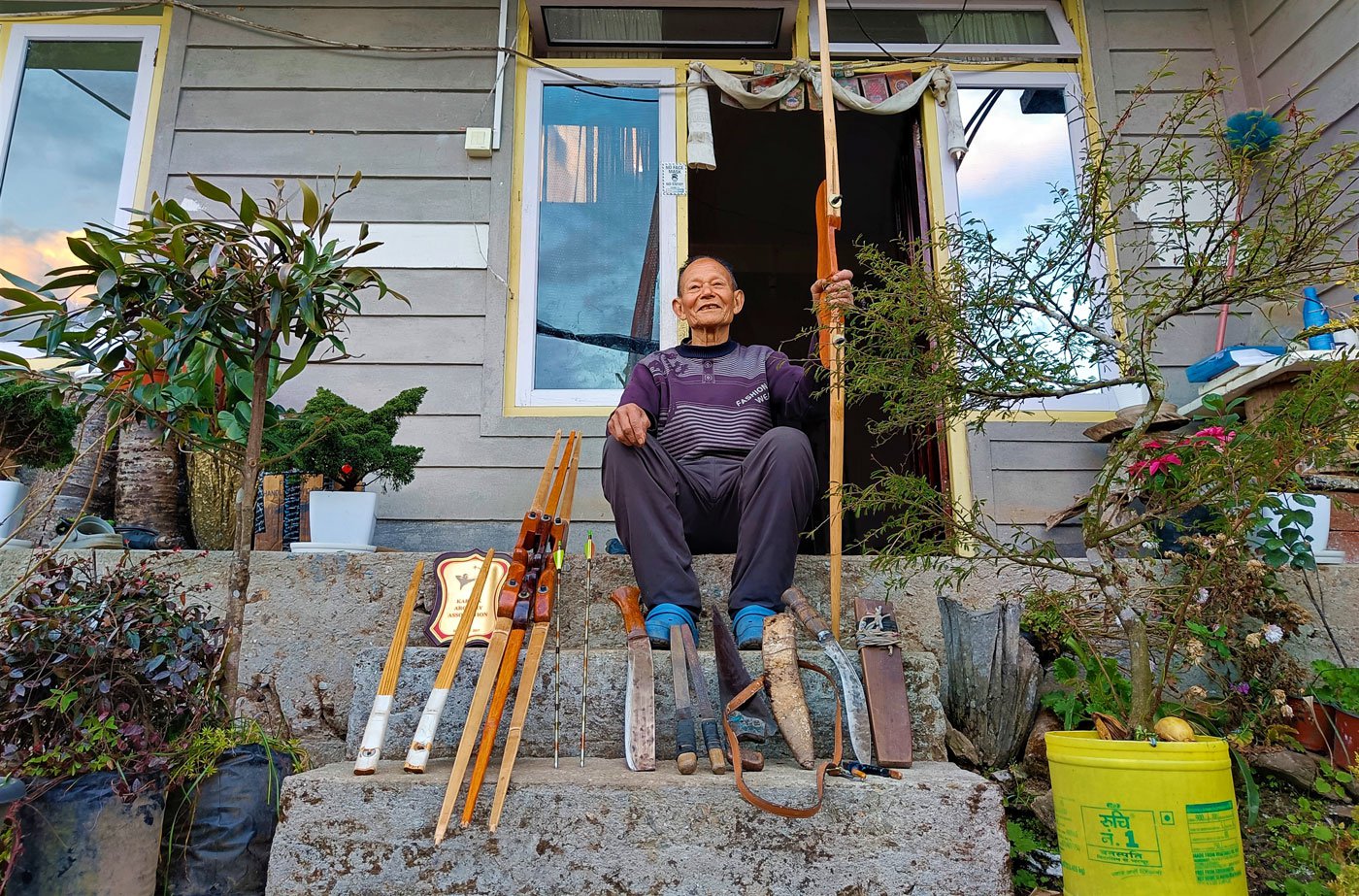 High-tech devices rule the archery market in Sikkim, but 83-year-old Tshering Dorjee Bhutia still makes bows and arrows the old-fashioned way, in a state whose archers have represented India in three Olympics

It takes time to realise that Tshering Dorjee Bhutia never earned his living from making bows. That’s because his life is so wrapped up in that art and craft, and it’s all the 83-year-old wants to talk about at his home in Karthok village of Pakyong district. For 60 years, his income came from carpentry – mainly repairing furniture. But his inspiration, as he would tell you, came from archery – deeply embedded in the culture of his native Sikkim.

His many decades as a skilled wood worker sit lightly on him. He would rather be known as the bow maker of Pakyong.

“I was 10 or 12 when I started making things with wood. Gradually, they began taking the shape of a bow and people started buying them. That’s how this bowman was born,” Tshering tells PARI.

“Previously, the bow was made differently,” he says, showing us some of his products. “This earlier type was called tabjoo [in Nepali]. It consisted of two simple pieces of stick joined together, tied, and covered with the chamda [leather]. The version we make nowadays is called the ‘boat design’. Making one bow takes three days, at least. But that’s for an active, young hand. An old hand would take a few more days,” Tshering says with a mischievous smile. 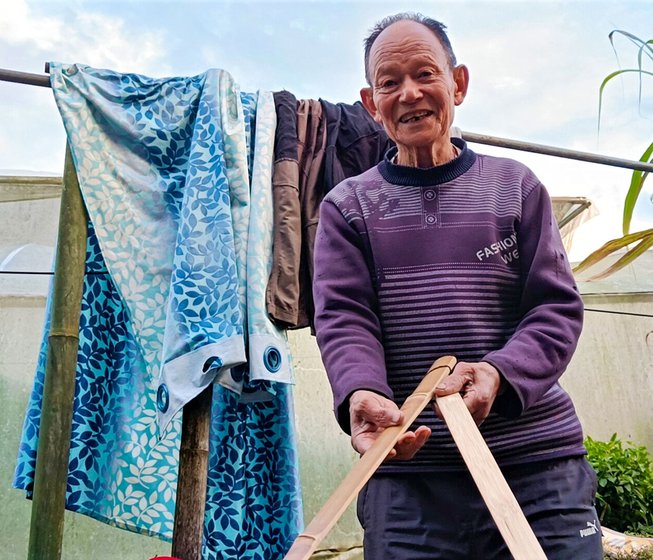 Left: Tshering Dorjee with pieces of the stick that are joined to make the traditional tabjoo bow. Right: His elder son, Sangay Tshering (right), shows a finished tabjoo

Tshering has been making bows and arrows for over six decades now in his hometown, some 30 kilometres from Gangtok. Karthok is known for its Buddhist monastery – the sixth oldest in Sikkim. Locals say Karthok had more bowmakers once, but Tshering is now the only one left.

In one vital way, Tshering’s house reflects the charm of Karthok. You reach the portico only after passing through a bright and colourful garden that is home to nearly 500 varieties of flowers and plants. He even has a greenhouse and nursery in his backyard, where you find some 800 orchids, besides herbs, ornamental varieties, and bonsai plants. This is largely the effort of his eldest son, Sangay Tshering Bhutia, 39, a highly skilled horticulturist. Sangay designs several types of gardens, sells plants – and even teaches and initiates others into horticulture.

“So six of us live here,” Tshering tells us. ‘Here’ being his modest house in Karthok. “Myself, my wife Dawti Bhutia [who is 64], my son Sangay Tshering and his wife Tashi Dorma Sherpa [she is 36]. And our grandchildren Chyampa Hesal Bhutia and Rangsel Bhutia.” There is one other resident: the family’s beloved dog, Dolly – mostly to be seen in the company of three-year-old Chyampa. Rangsel is not yet two.

Tshering’s second son, Sonam Palazor Bhutia, 33, is in the India Reserve Battalion of Sikkim, posted in Delhi, where he lives with his wife and son. Sonam visits his father in Karthok during festivals and holidays. The oldest of Tshering’s children is his daughter, Tshering Lhamu Bhutia, who is 43, married, and lives in Gangtok. Also in that city is his youngest, Sangay Gyampo, 31, a research scholar pursuing his PhD. The family are from the Buddhist Lama community and belong to the Bhutia, a major Scheduled Tribe in Sikkim. 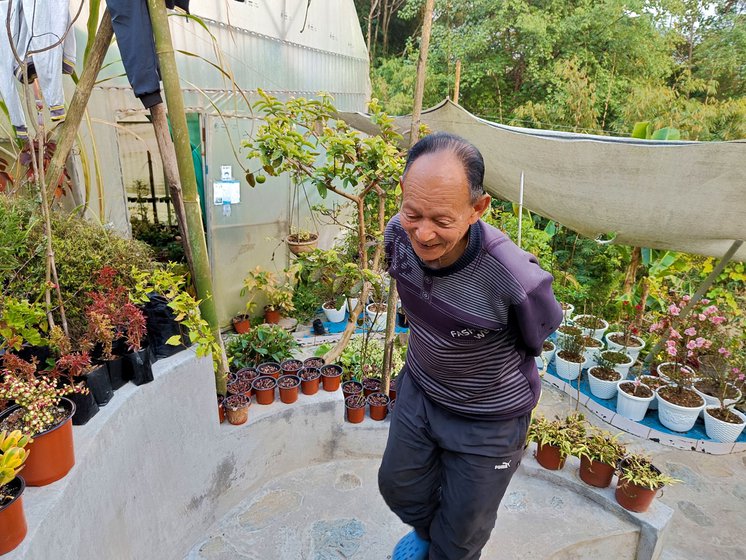 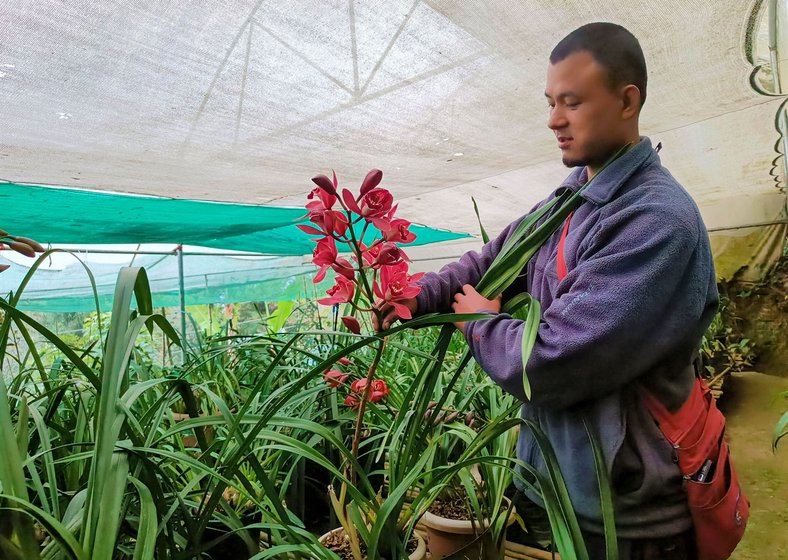 Left: Tshering’s garden that is home to varieties of flowers and plants. Right: Sangay Tshering, a horticulturist, spends most of his time in the garden. “More than a profession, it's a passion for me”

As we try and learn about the use of Tshering’s bows, Sangay Tshering pitches in. “Papa made this for me,” he says, showing us a brown and yellow ochre coloured bow. “It is the only one I practice archery with.” He stretches his left arm to demonstrate the technique involved in using the bow.

Archery is deeply embedded in Sikkim’s traditions and is more than a sport – it is also a culture. Typically, it comes alive just after the harvests, when festivals and tournaments allow people to gather together in a period of relative inactivity. It was the national sport here even before Sikkim’s integration into the Indian Union.

Sikkim is home to Tarundeep Rai, two times World Archery Championship medallist, twice an Asian Games medallist, and perhaps the only archer to have represented India in three Olympics – Athens 2004, London 2012, and Tokyo 2021. Last year, Sikkim chief minister Prem Singh Tamang-Golay announced the setting up of the Tarundeep Rai Archery Academy in the state to honour the Padma Shri winner.

Archery teams from West Bengal, Nepal and Bhutan are regular visitors to Sikkim to participate in the high-end tournaments held at the royal palace grounds in Gangtok and other parts of this state. Interestingly, traditional games, with barebow archery, remain popular with the Sikkimese themselves – more than the modern sport where the bow can be a very complex technological device. 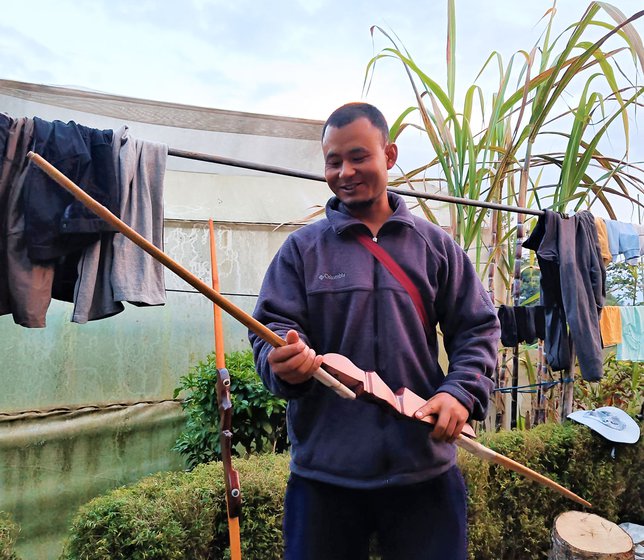 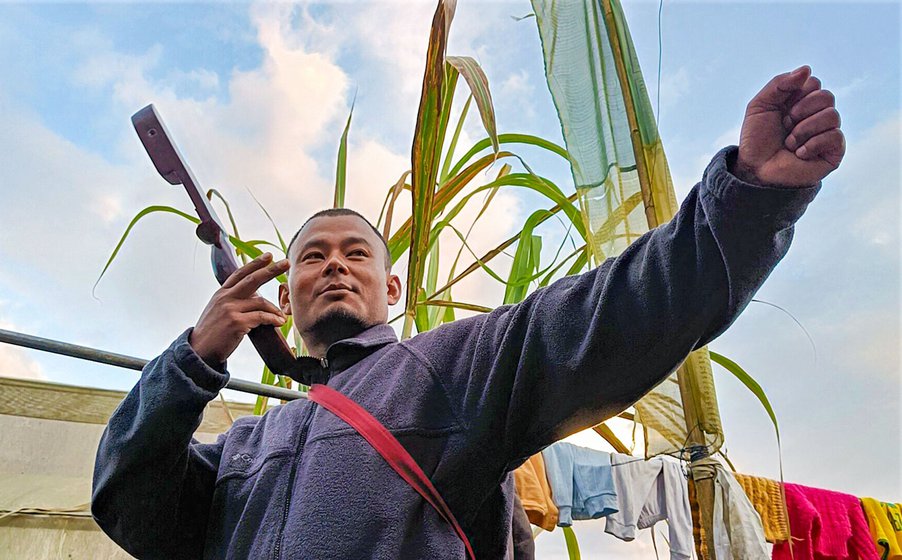 Sangay Tshering with a modern bow (left) made by his father, and (right) demonstrating the arm posture for shooting

Oddly, the Bhutia family tells us, there are no specific shops around from where you can buy the traditional bow. Arrows can still be bought from some local stores, but not the bow. “Buyers get to know about us from local markets and archers – and visit us at home. It's not a big place and nobody has to struggle to find our house. Everybody knows everybody here,” says the octogenerian.

The bow buyers come from various parts of Sikkim, the neighbouring states, and even Bhutan. “They come from or via Gangtok and Karthok,” says Tshering in Nepali. That’s the language his family, like many others in the state, speaks.

While we talk about how bows are made and when Tshering learned and started making them, he quietly goes inside the house, looking for something. Some three minutes later, he emerges smiling and excited – with a bunch of bows and arrows he had made decades ago, along with his aujaar, the tools he uses to make them.

“I made all of these, 40 or even more years ago. Some of these are very, very old. Just a little younger than me,” he says smiling. “I have never used any electric appliance or tool to make these. Everything was handcrafted properly.”

“The arrows we use now are modified versions,” says Sangay Tshering. “I remember when I was very little, the arrow’s tail used to be different. Back then, there used to be a duck’s feather mounted to the tail. Now the modern versions come mostly from Bhutan.” Sangay hands over the arrows to me and goes back inside the house to get a modern, machine-made bow. 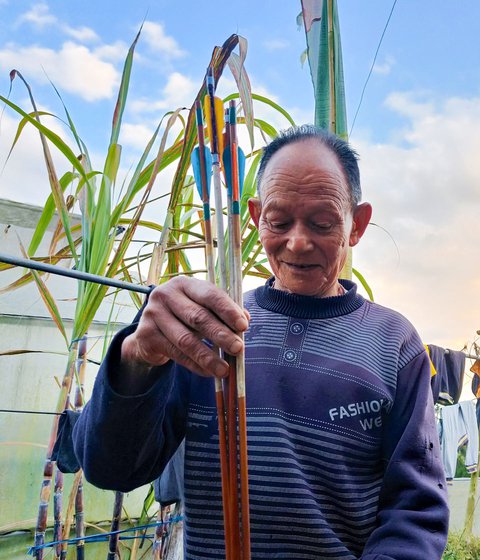 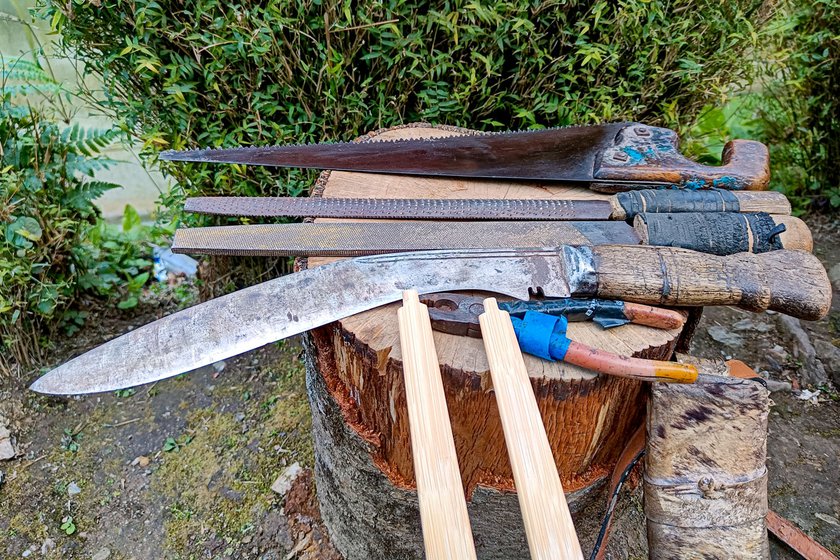 Left: Arrows that Tshering had handcrafted over 40 years ago. Right: The tool set he uses for his handmade bows and arrows

“We sell a roughly made bow, without extensive filing and polishing, for 400 rupees to those who approach us saying they want a lighter and cheaper version,” says Sangay. “That’s when we use the upper part of the bamboo, which we usually don’t because of its lesser strength. But a fine, three-coat, fully polished bow, would go for 600-700 rupees. We use the lower, stronger part of the bamboo to make that.

“To make one fine bow, the bamboo consumed would be worth maybe 150 rupees, the thread or string worth 60 rupees, and the pricing of the polish is difficult to calculate,” Sangay laughs.

“We make the polish at home. We buy the chamda (goat skin) mostly during Dashain [Dussehra festival] and take the wax out of it for polishing. When the making of a bow is completed, this polish is coated onto it. Another layer is applied when the first one dries up, and this is repeated till three coatings have been done. That 1 x 1 foot goat skin costs us 150 rupees,” says Sangay. The way they’ve used it makes it hard to figure out the exact cost of the polishing process.

“Oh, and the main material, the backbone of the bow,” he adds, “the bamboo for that costs us 300 rupees a piece. We can make five bows from one big bamboo, easily.” 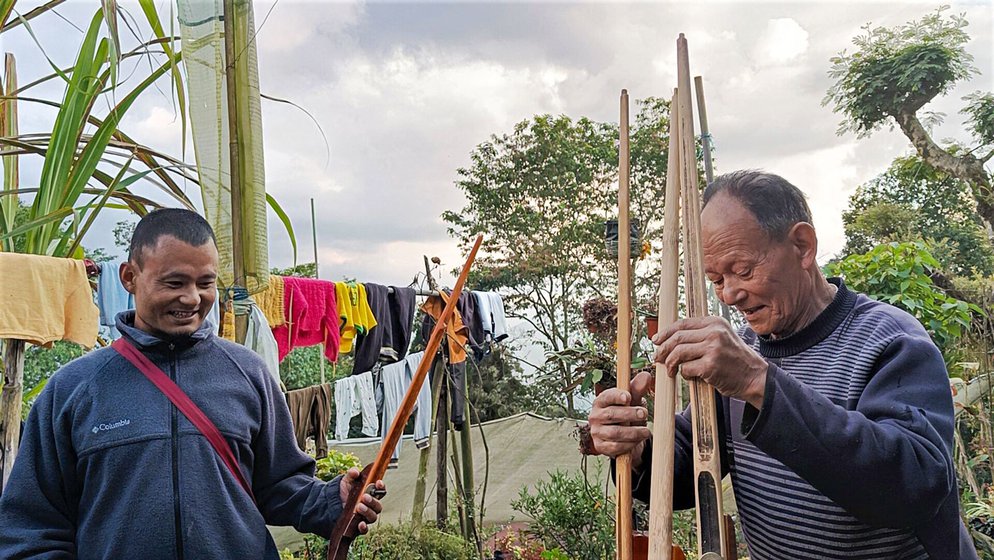 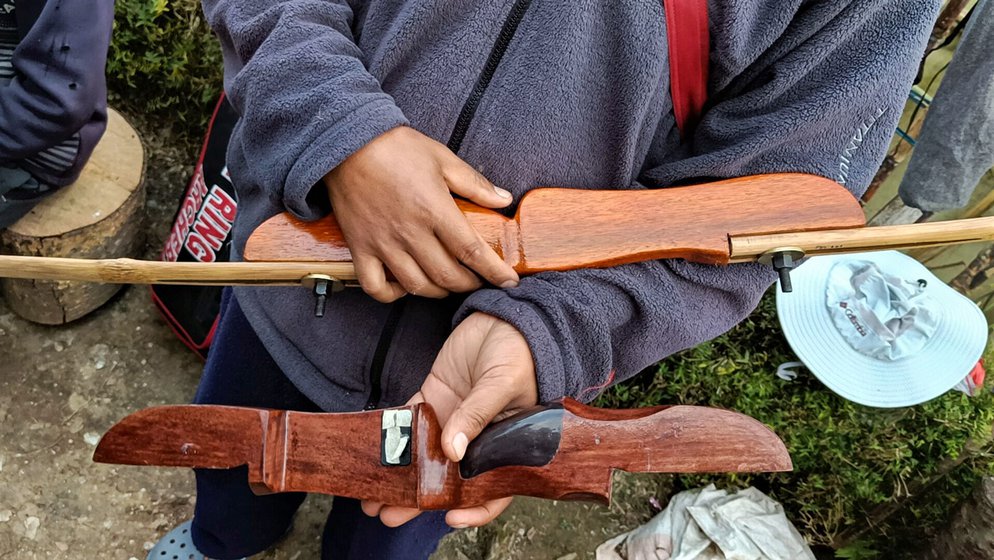 Left: Tshering holds a bunch of the traditional bows, while his son has the latest bow type in his hand. Right: Sangay shows the difference between a bow painted with wood polish and the one coated by wax extracted from goat skin

“Here is the latest bow design, this one.” Sangay has gone inside, and reappears with a huge archery kitbag, taking out a bigger and heavier version of the bow from it. “But this is not allowed in our local tournaments. One can practice with it, but to play the match, the traditional handmade bow is mandatory. My brothers and I, we also play in those tournaments with the bows made by papa. This time, my brother brought some different kind of wood polish from Delhi, and painted his bow with it. Mine is polished with the traditional paint that papa has been using for ages.”

The Bhutias regretfully share that the sale of bows has reduced over the years. Their product mostly sells at the Buddhist festival of Losoong, which is the Sikkimese New Year of the Bhutia tribe. Observed through December, it is a post-harvest festival that also sees archery tournaments. “That’s when most people come here due to the monastery, and buy from us. In recent years, we have sold barely four to five pieces, annually. The artificial bow has taken over the market now, which is a Japanese product, I suppose. Earlier, till some six or seven years ago, I was able to sell around 10 bows annually,” Tshering Dorjee tells PARI.

But even 10 bows a year would not have brought him any appreciable income. It was his work as a carpenter, making and repairing furniture, and other little woodwork items that sustained the family. Tshering says that when he was last active in that occupation full time – well over a decade ago – and was the sole earning member of the family, he earned about Rs. 10,000 a month. But it was and is the bows that fascinate him, not the carpentry. 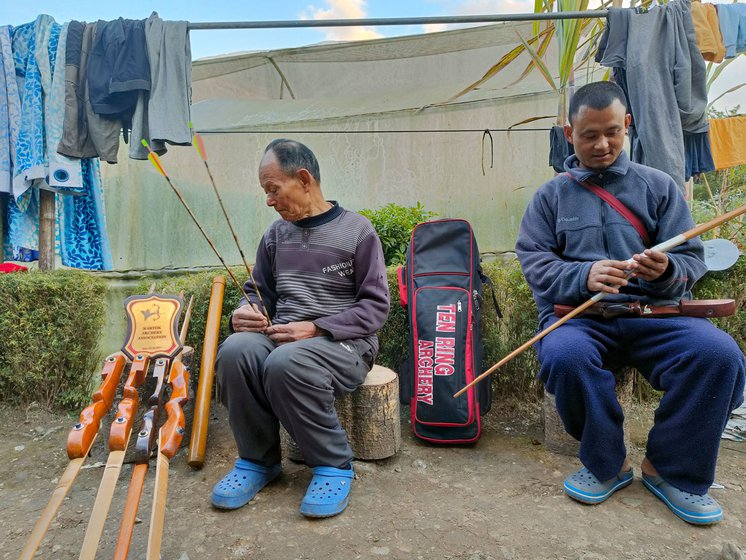 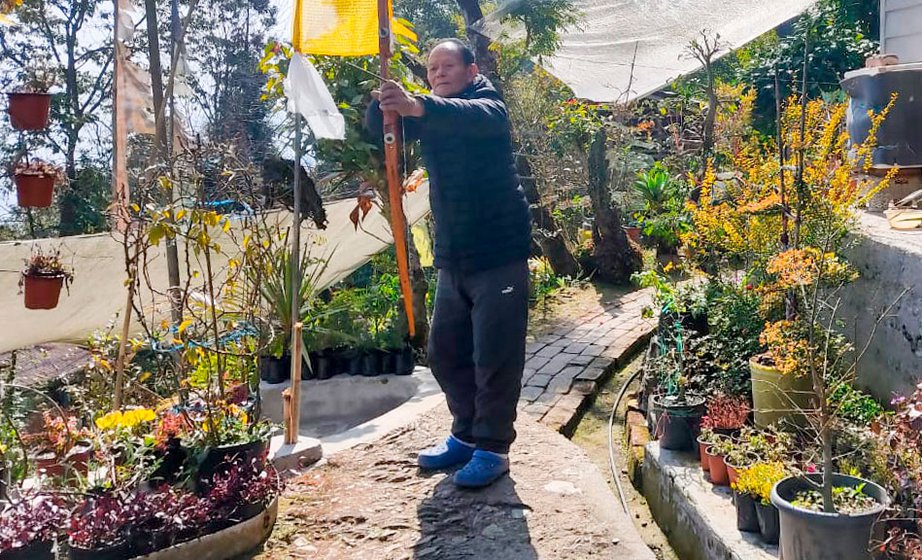 The sale of bows has reduced over the years, the Bhutias say. And Tshering is not making many as his eyesight has weakened

The bows the Bhutias craft are made from a special kind of wood commonly called Bhutanese bamboo. “All the bows papa makes are crafted from Bhutanese bamboo which was earlier not available in India,” says Sangay. “Our supply now is from farmers who had planted the seeds of this variety in Kalimpong, located in West Bengal, 70 kilometres from here. I go there myself, and buy two years’ worth of supply at a time, and we store it here at home in Karthok.”

“You need a guru first. Nobody can do anything without a guru,” says Tshering. “Initially, I was just a carpenter. But later, I learnt bow making from my father. I used to see the designs of bows my friends used to play with, and tried making some. Gradually, it started to turn out fine. Whenever someone would approach me to buy one of those, I would first of all show them how to use it!”

The 83-year-old is now nostalgic about his early days in the craft of bow making. “My earnings from it are presently negligible – but were better 10 years ago. My home, this house, has been run by my children for about a decade now. The bows I make now are no more a source of earning but a labour of love.”

“Papa does not make many of them now – his eyesight has weakened. But he still makes a few,” says Sangay Tshering wistfully.

“We have no clue who will carry on this craft after him.”