‘This winter, our hearts are burning embers’

At the farmers' protest sites in Singhu and Burari, at the end of each day, protestors staying in makeshift camps prepare for the long night and fight ahead in a spirit of camaraderie and renewed resolve

Gurpratap Singh is a student in Class 11 and his cousin 13-year-old Sukhbir, is in Class 7. Both are from Punjab’s Amritsar district. They are away from school right now, but onto a different kind of education.

“We are guarding farmers’ territory here, every night, and we’ll keep doing this,” 17-year-old Gurpratap told me at the Singhu-Delhi border in Sonipat, Haryana.

They are among hundreds of thousands from farming families who have gathered at different points on Delhi’s borders. Some farmers did enter the capital early, a couple of weeks ago, and are camped at the Burari ground in north Delhi.

Across all the sites, their massive and peaceful protests demanding the repeal of the three farm laws rammed through Parliament in September this year shows no signs of abating. And the farmers are prepared for a long battle ahead, determined about their demands, committed to their cause.

It is now late in the evening and many are getting ready for bedtime as I walk through some of the places where they’ve set up camp in Singhu and at Burari. Some farmers are staying in their trucks, some sleeping at petrol pumps, some pass the night in group singing sessions. Warmth, camaraderie, and a spirit of resolve and resistance comes through in all these clusters.

The farmers are protesting against these three laws: The Farmers Produce Trade and Commerce (Promotion and Facilitation) Act, 2020 ; The Farmers (Empowerment and Protection) Agreement of Price Assurance and Farm Services Act, 2020 ; and The Essential Commodities (Amendment) Act 2020 .

They see these laws as essentially handing over their right and stake in agriculture to the country’s most powerful corporations, leaving them at the mercy of these big businesses. “If this is not treachery, then what is?” asks one voice in the dark.

“We farmers have had experience of these corporates before – and we don’t trust them. They have betrayed us earlier, and we are not fools. We know our rights," said one of the many voices as I walked through the camps set up in Singhu that late evening.

Aren’t they worried about the stalemate here, when the government is rejecting any possible repeal of the laws? Will they hold out?

"We are strong,” says another cultivator from Punjab. “We are making our own food and distributing it to others as well. We are kisans , we know how to stay strong." 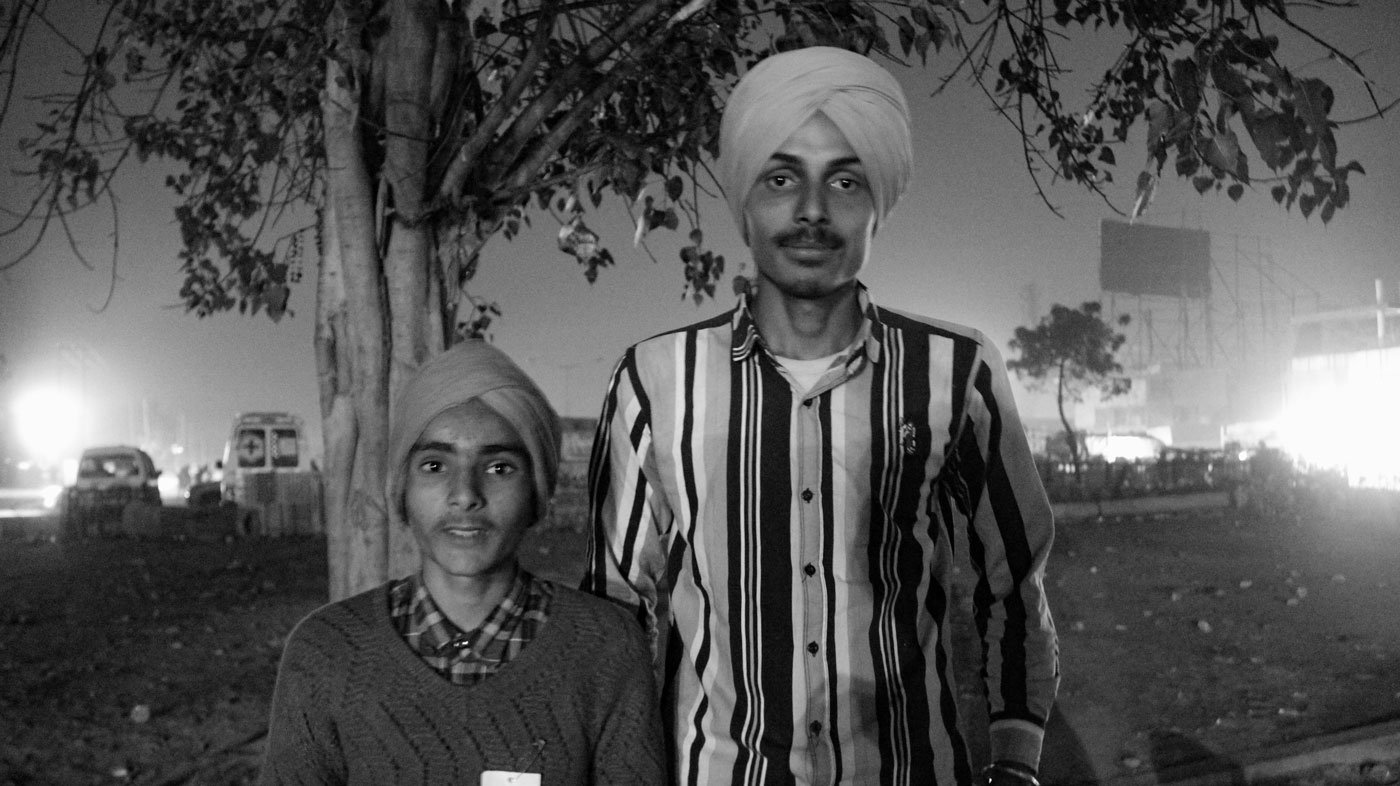 Gurpratap Singh, 17, and Sukhbir Singh, 13,  school students from Amritsar district, tell us in Singhu that they are guarding 'farmers territory here every night'

And there are many from Haryana too, here to help the protestors the best they can. As Shiv Kumar Babhad, 50, from Kaithal district says: "Our farmer brothers came all this way to the Delhi border, away from the comfort of their homes. We are providing them everything we can."

The farmers in Singhu and Burari also mention the goodwill and care they are receiving from fellow citizens. “People are coming to our aid. Doctors have set up camps at different points on the border, providing us with medical assistance,” says a protestor.

“We have brought enough clothes,” another tells me, “but still people are donating more and more clothes and blankets. This is a caravan which feels like home.”

Towards the government and the corporate world, there is great anger and a sharp sense of grievance. “The government has betrayed farmers,” says a protestor. “We give this country food and we get tear gas and water cannons in return.”

“When farmers water their fields in the chill of winter, these corporates, these politicians, sleep snug in their beds,” adds another.

But the determination to resist also runs deep: “We survive cold winters every year, but this winter, our hearts are burning embers," says an angry farmer.

“You see these tractors?” one of them asks. “These are also our weapons. We care for them as we care for our children.” There are thousands of tractors now on Delhi’s borders and countless thousands of people have come here in trolleys linked to them.

Another person speaks up: "I am a mechanic by profession, and I have promised myself, I will repair each and every farmer’s tractor free of charge."

Every one of them feels they are in for a long drawn-out battle. Some say this standoff could go on for months. But no one is ready to give up.

One of them sums it up: “We are staying here until those three laws are repealed. Or until death arrives.” 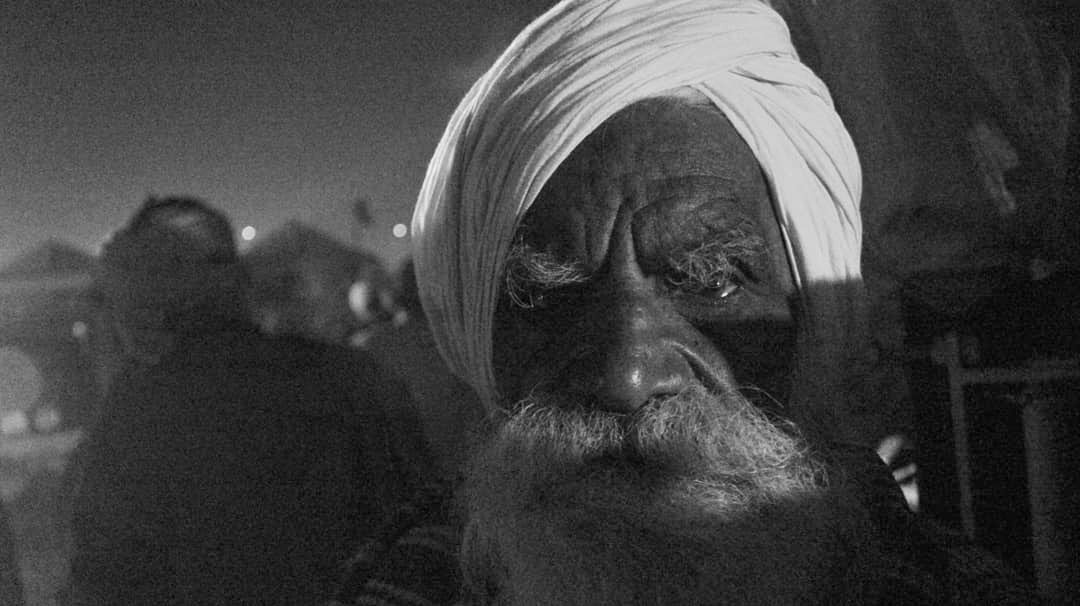 This 70-year-old protestor at the Burari ground in north Delhi accuses the centre of betraying farmers. He asserts that they won’t budge till the three farm laws are repealed. Otherwise, 'we are staying here until death arrives'. 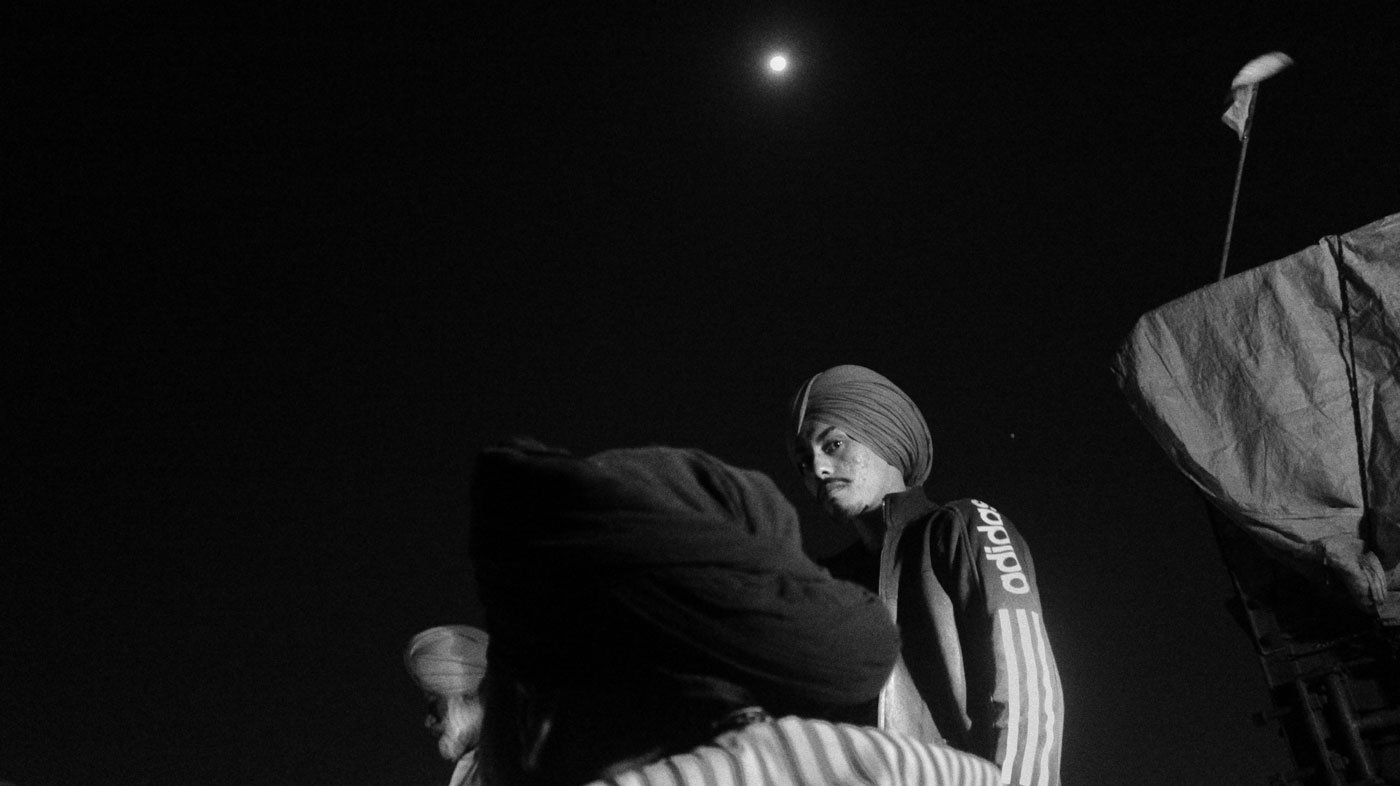 At nightfall, a young protestor at Burari ground in north Delhi. 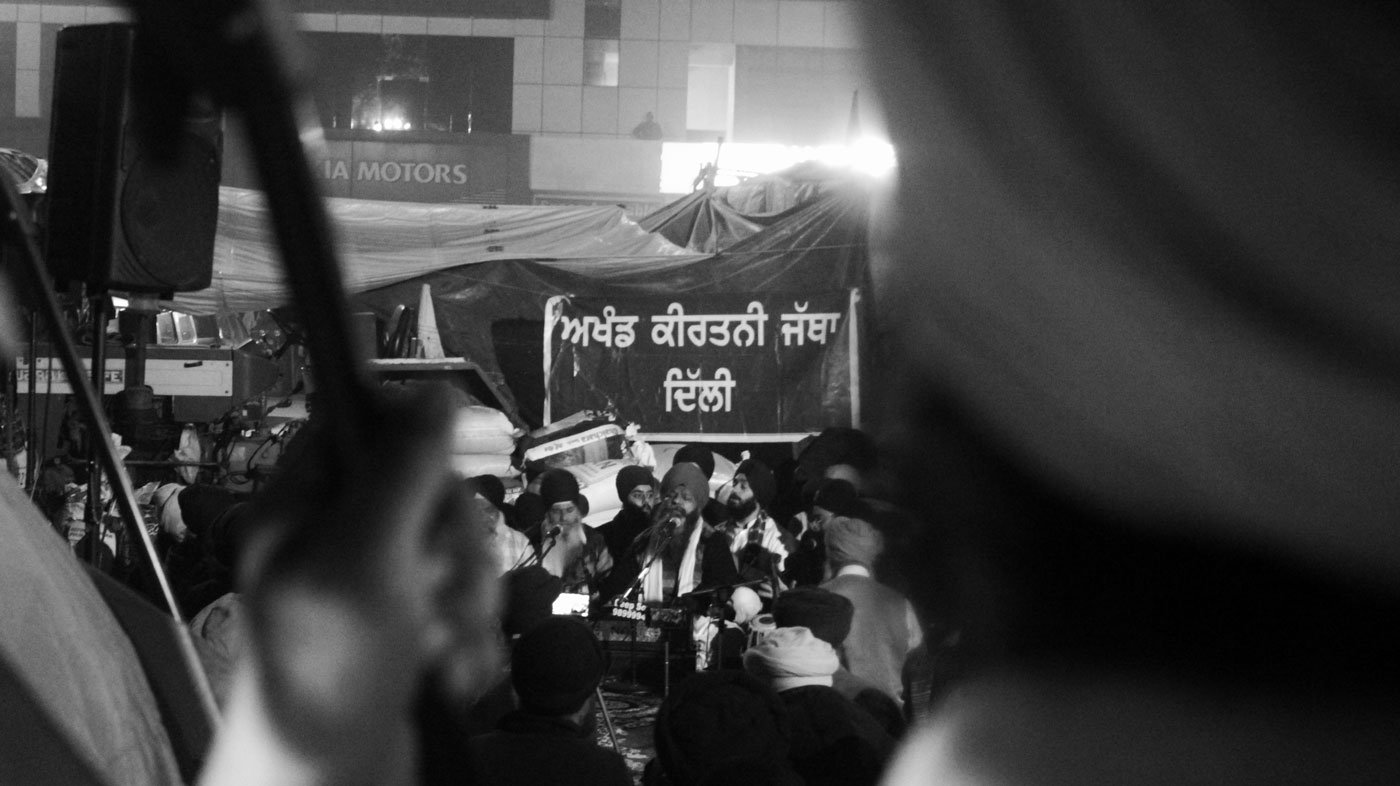 The farmers at their evening prayers at Delhi’s Singhu border, in Sonipat Haryana. Many gurdwaras have organised langars (Sikh community kitchen meals) where some policemen have also been fed. 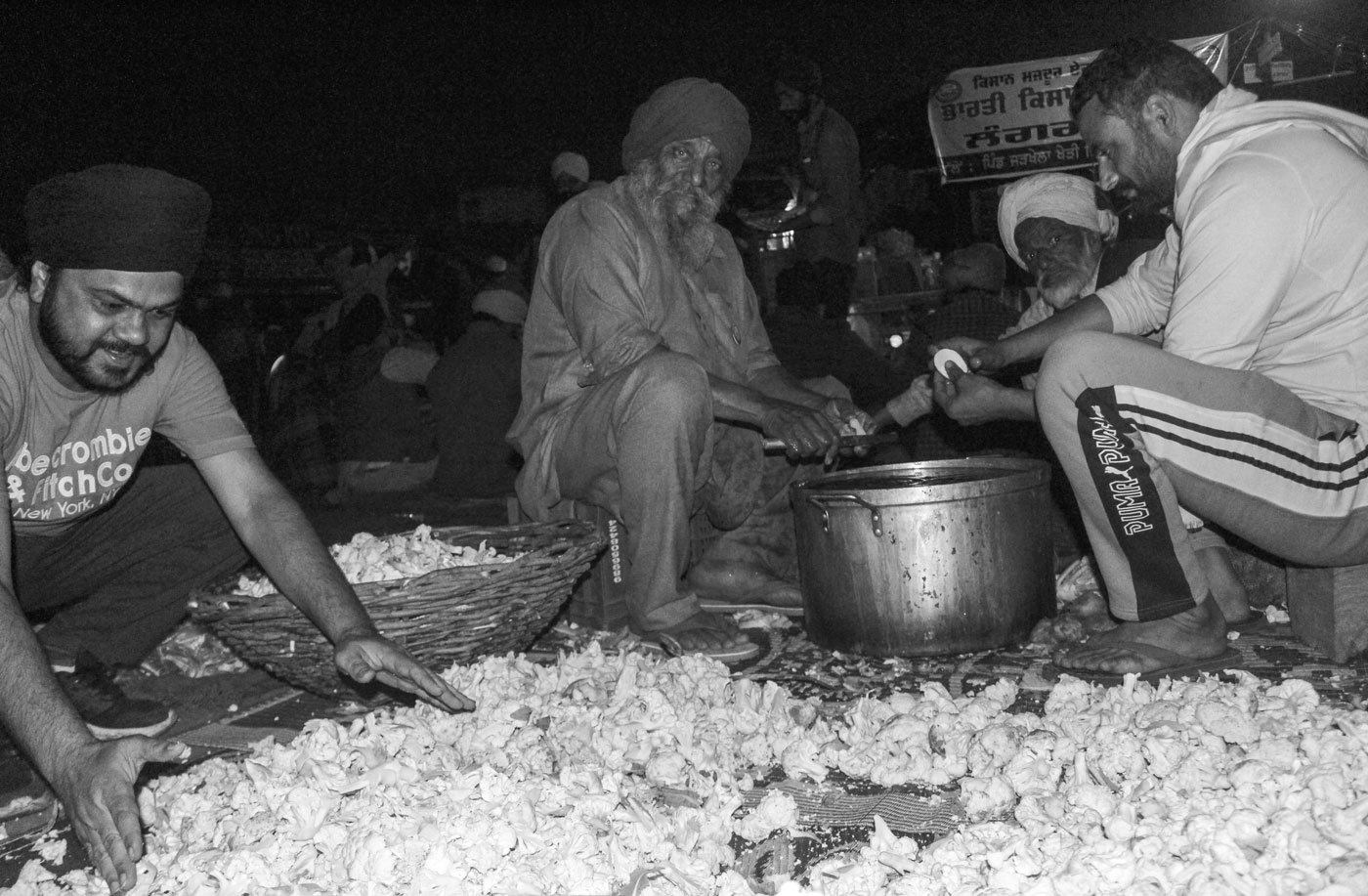 A group of farmers at the Singhu border organising to prepare a meal for their contingent of protestors, one of many such efforts across both Singhu and Burari. 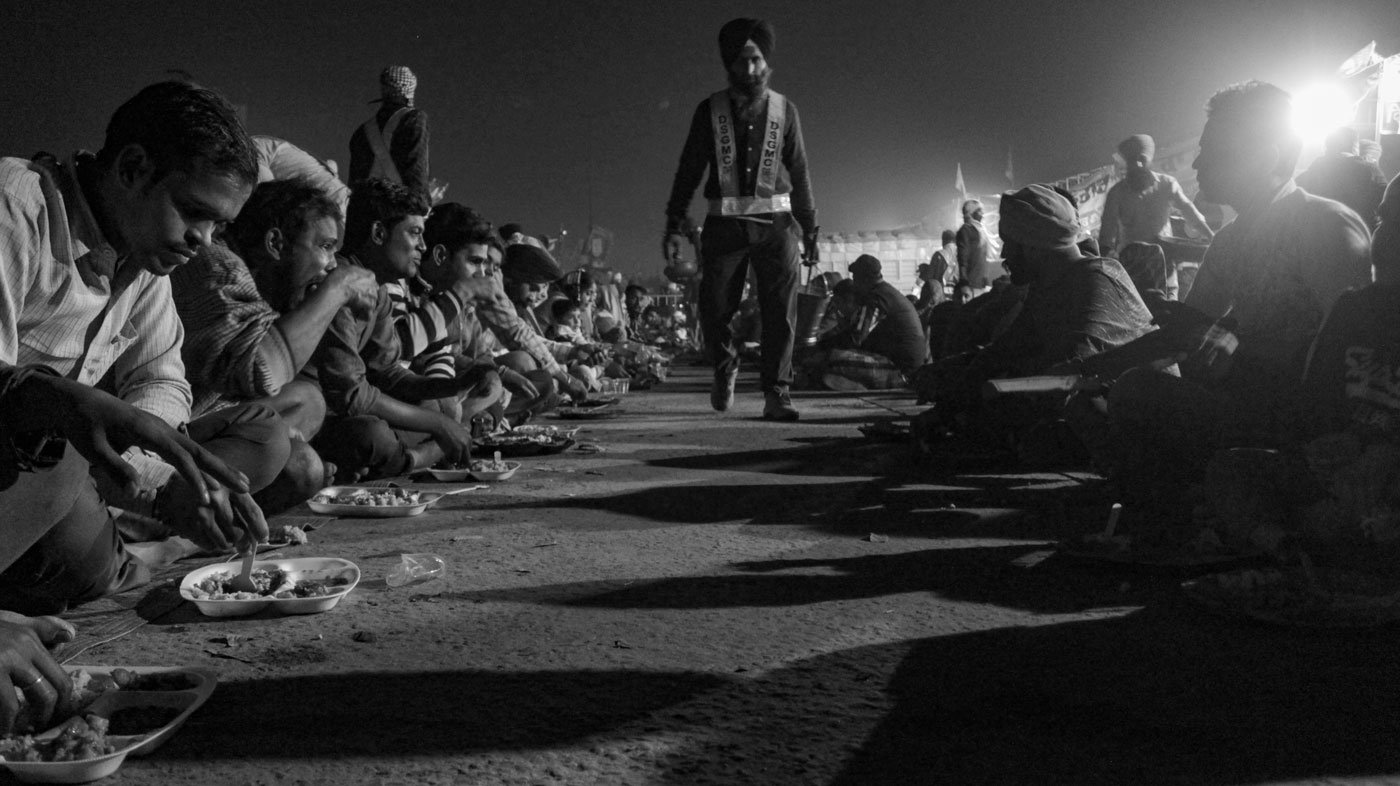 And the langar (Sikh community kitchen) is on at night in this camp at the Singhu border. 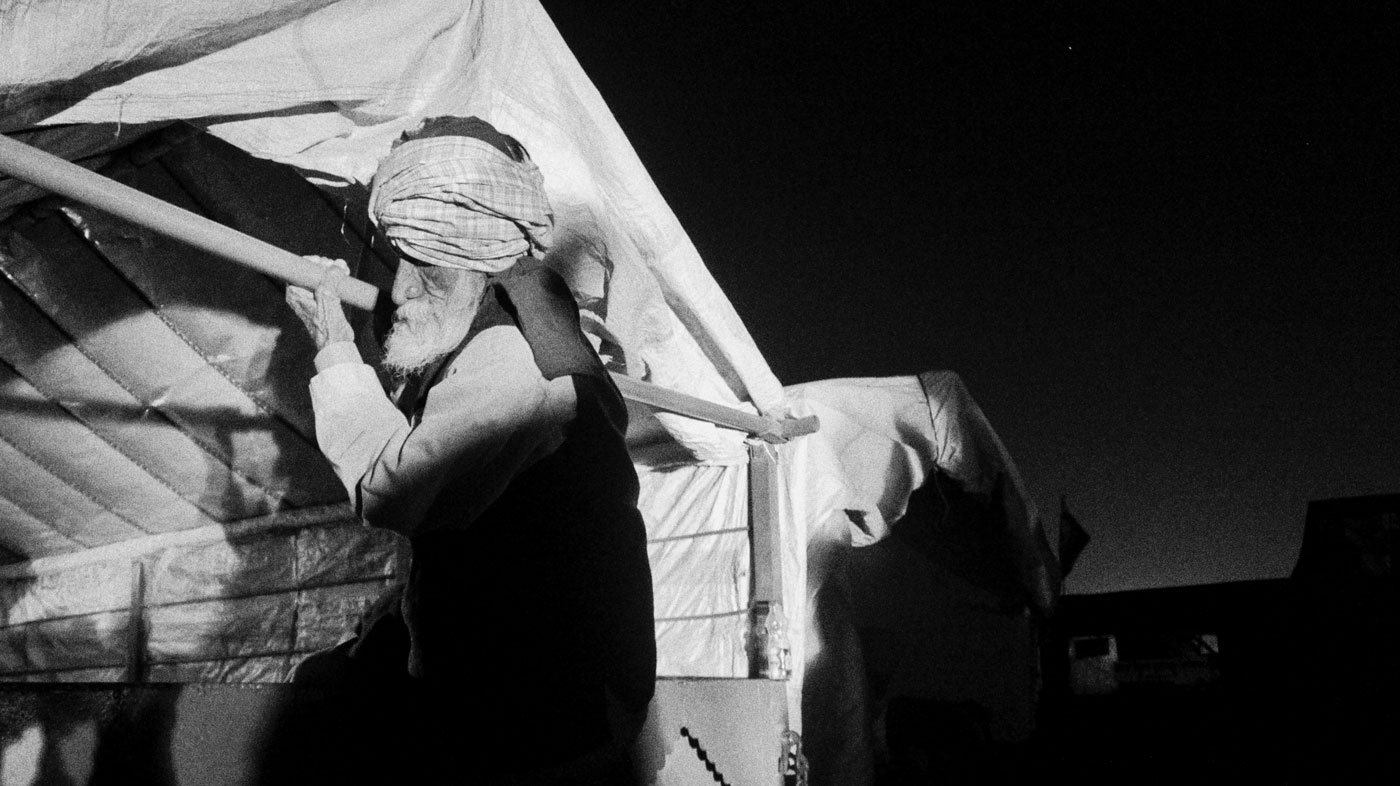 An elderly farmer climbing into a truck at Burari ground. Some farmers are sleeping in their trucks during the protest. 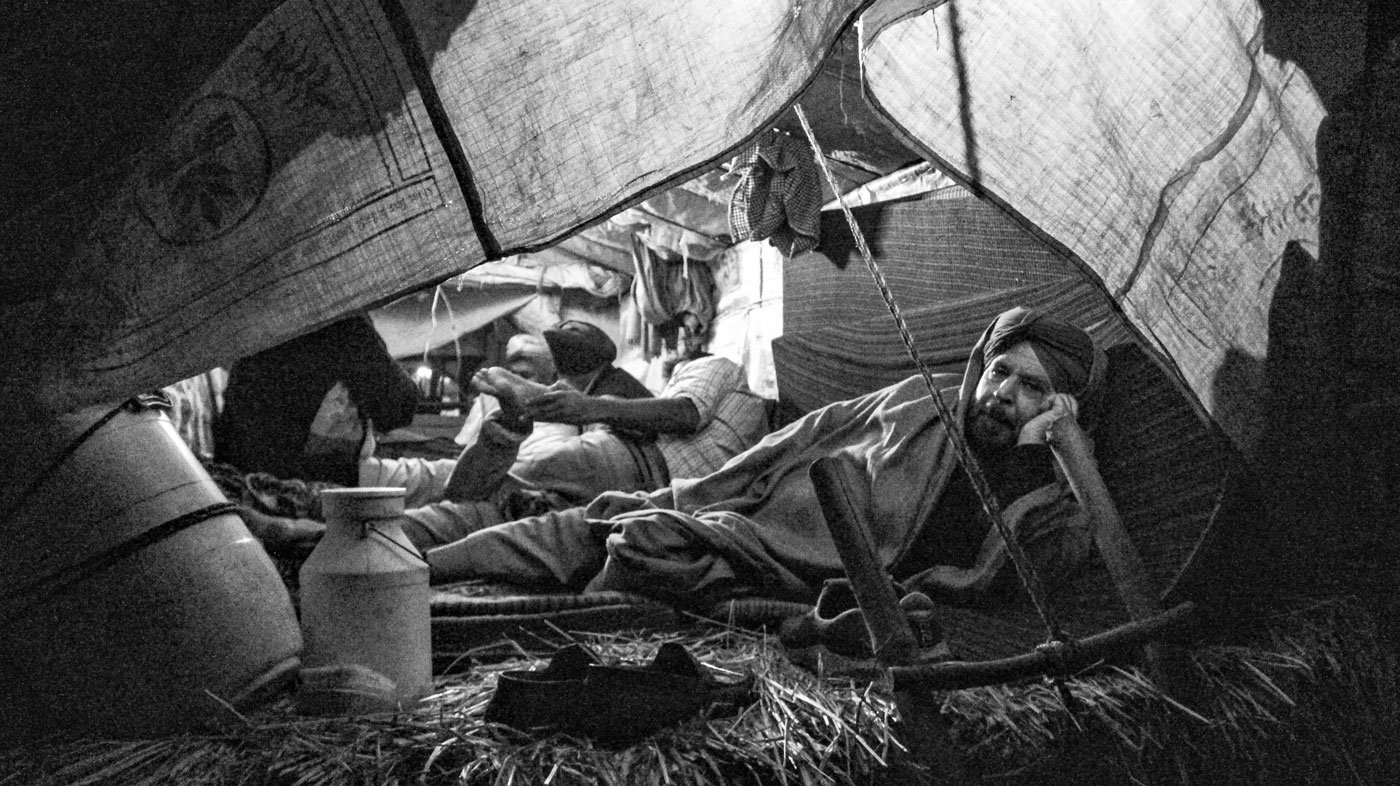 Farmers resting in their truck at the Singhu border 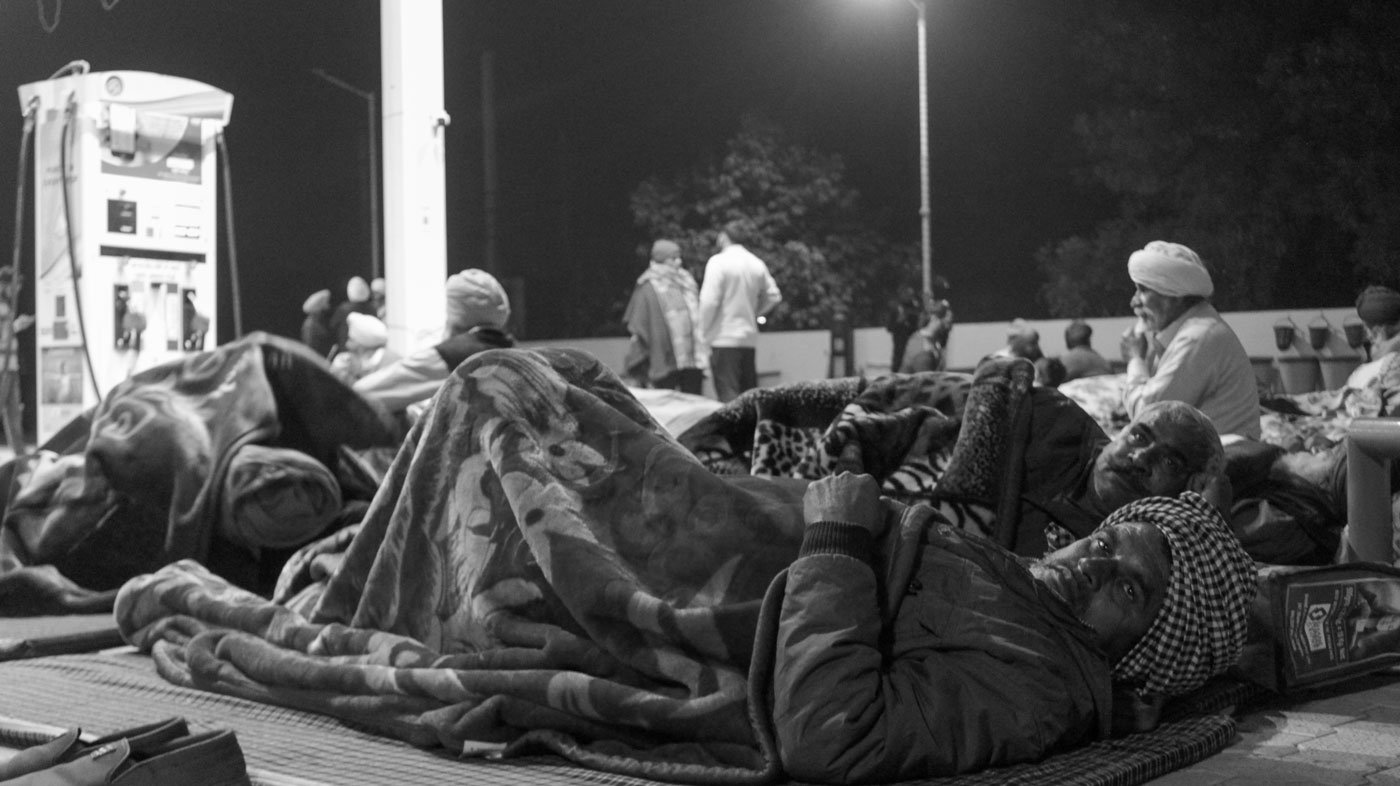 A group of protestors sleeping at a petrol pump on the Singhu border. 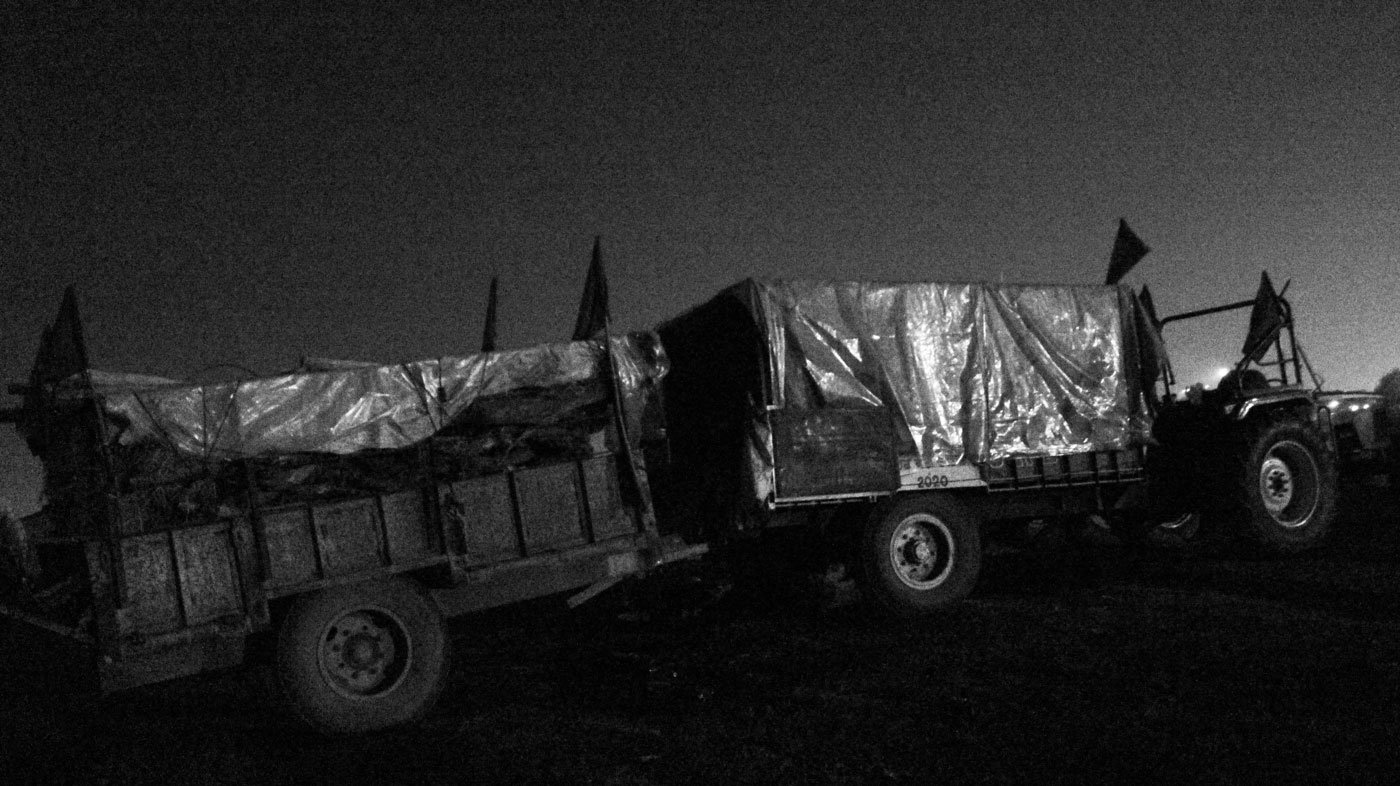 The protestors have brought along thousands of tractors, for them more than a form of transport. As one of them at Burari says, 'These tractors are also our weapons'. 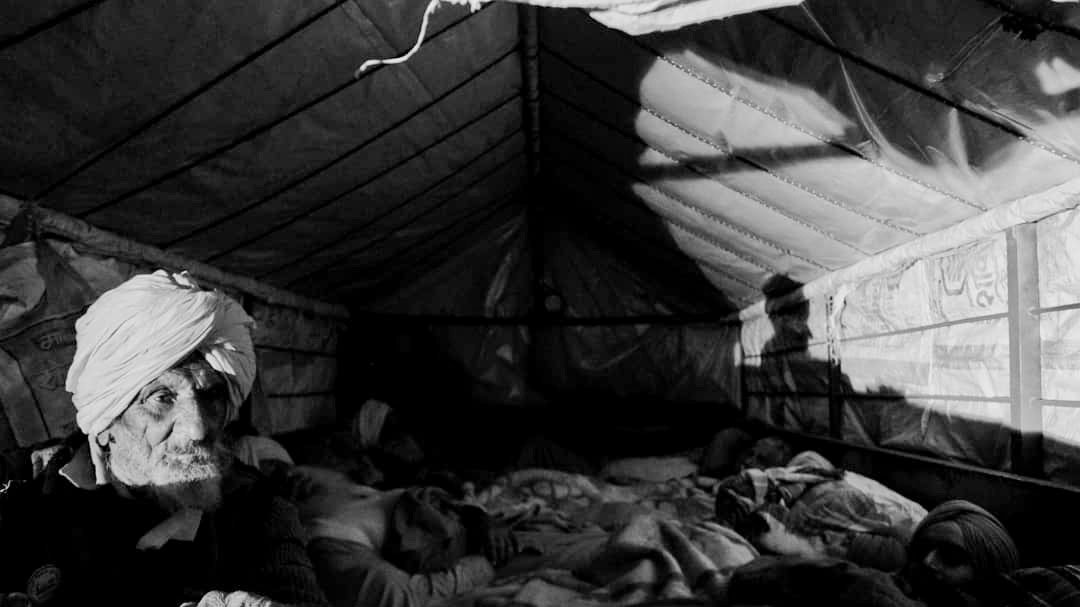 'I am not sleepy, the government has stolen my sleep', says this farmer at the Burari protest site in north Delhi.

Other stories by Shadab Farooq