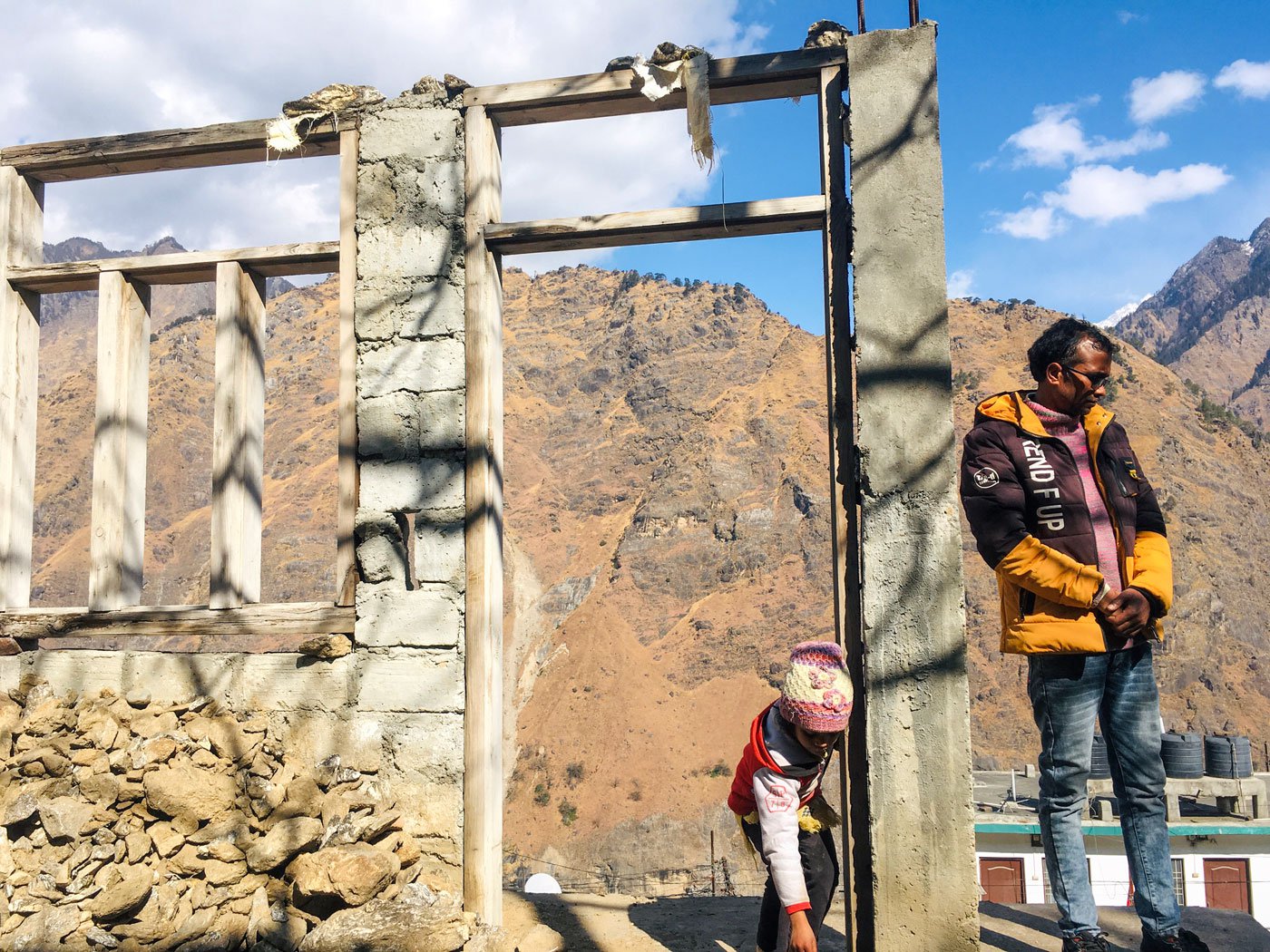 As walls develop cracks and floors give way in homes and commercial establishments, thousands of residents of this town in the Himalayas face uncertainty and loss

“It started in the kitchen,” says Ajit Raghav, a resident of Joshimath town in Chamoli district of Uttarakhand, recollecting the fateful events of the morning of January 3, 2023.

The 37-year-old jeep taxi driver says big cracks first appeared in the kitchen and rapidly spread to other parts of his house. In his modest two-storey home, the room with the least cracks, was then quickly converted into a temporary kitchen. The family of eight were suddenly out of space.

“I sent away our two older daughters, Aishwarya [12] and Shrishti [9], to stay with my older sister,” says Raghav. The rest of the family – Raghav, his wife Gauri Devi, six-year-old daughter Ayesha and his two elderly paternal aunts – have their meals here. But by evening they leave to sleep at the nearby Sanskrit Mahavidyalaya School which has been designated as a temporary shelter in this Himalayan town. Roughly 25-30 displaced families have been moved here.

According to the January 21, 2023 bulletin put out by Chamoli district authorities, 181 structures across nine wards in Joshimath have been flagged as unsafe, and 863 buildings show visible cracks. Raghav shows PARI the cracks in houses in his neighbourhood. “Every home here is a story of Joshimath,” he says referring to the unbridled development that has led to this situation.

The cracking open of walls, ceilings and floors of buildings in Joshimath, says Raghav, began on January 3, 2023. In a matter of days it had precipitated into an acute crisis. Around the same time, National Remote Sensing Centre (NRSC) of the Indian Space Research Organization (ISRO) put out images showing the extent of land sinking in Joshimath: 5.4 cm between end-December 2022 end and early January 2023. The photos can no longer be found on NRSC website.

In Singhdar ward where Raghav lives, 151 structures have been identified with visible cracks; 98 are in the unsafe zone. They have all been marked with a red cross by district authorities to signify that they are unsuitable for habitation and unsafe to be around. 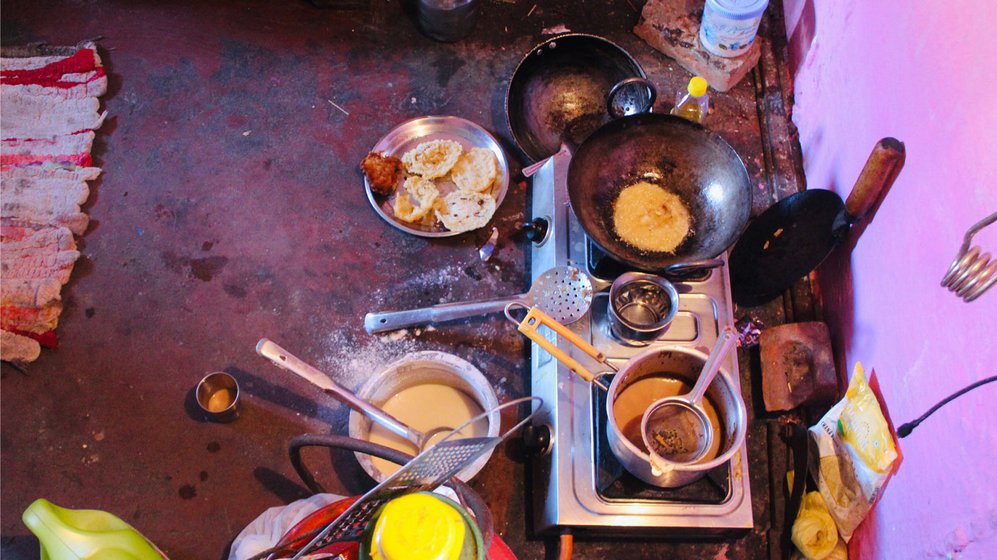 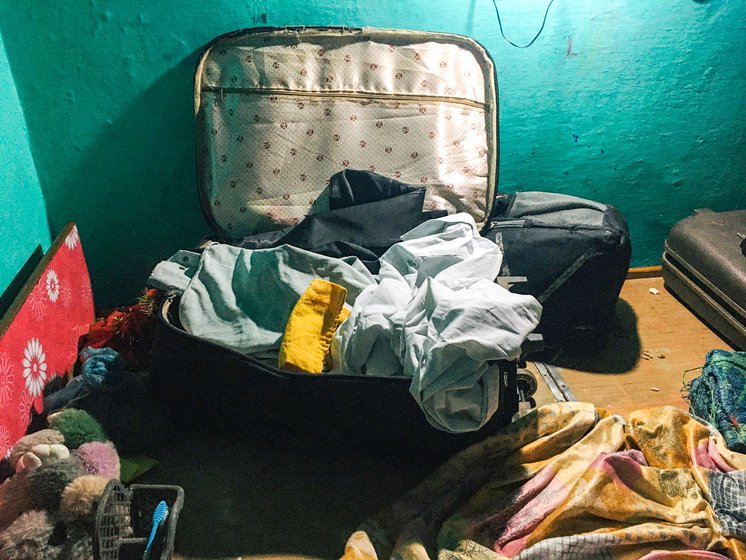 Left: The family has set up a temporary kitchen in the room with the least cracks. Right: Clothes and other personal belongings are piled up in suitcases, ready to be moved at short notice 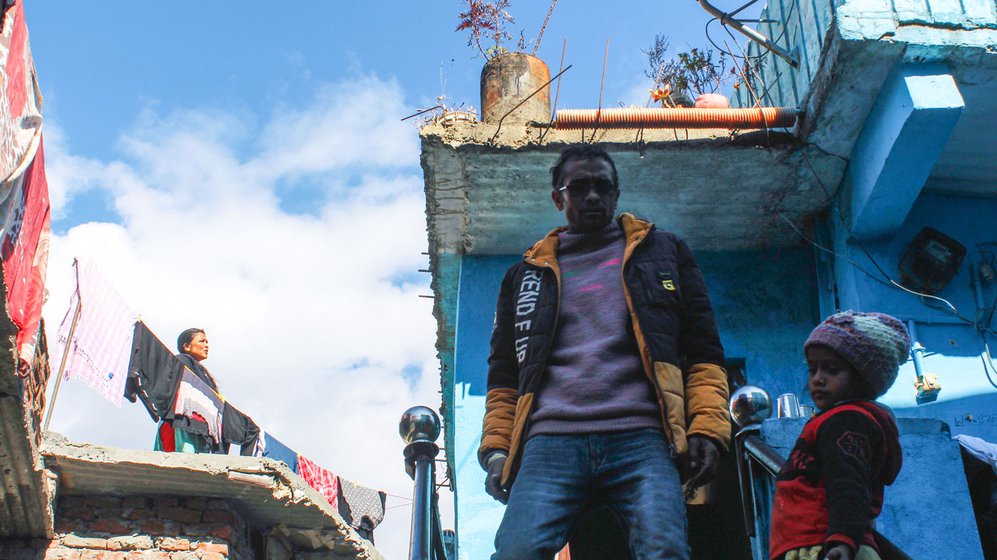 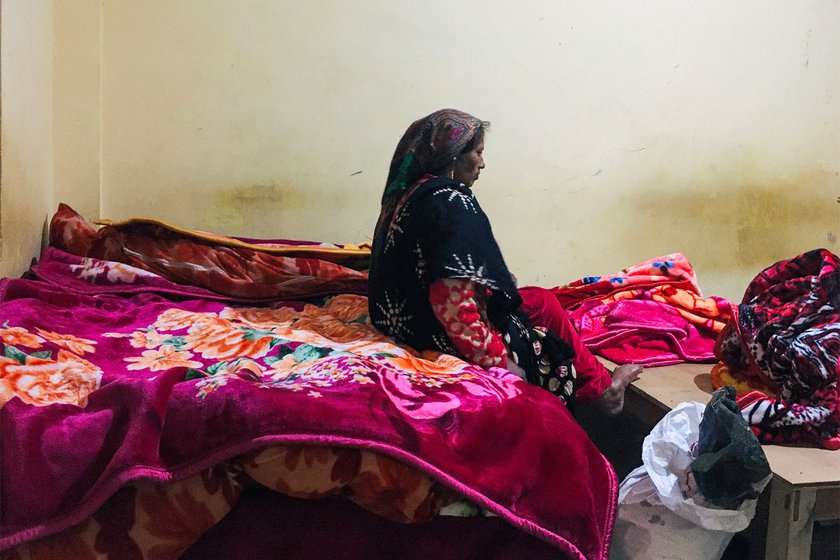 Left: A neighbour is on her roof and talking to Gauri Devi (not seen); Raghav and his daughter, Ayesha are standing in front of their home. Right: Gauri Devi in the temporary shelter provided by the Chamoli district administration

Raghav who has lived here all his life, is doing all he can to stall the marking of his house with the red cross. “I want to come again to sit in the sun on my roof and watch the mountains,” he says. He has lived here as a child with his parents and his older brother, all now deceased.

“The red cross means that the authorities [Chamoli district officials] will seal the place. It also means people can’t come back to their homes,” he points out.

Night has fallen and the family have finished their dinner. Raghav’s aunt is waiting to leave for their temporary home – the school – to sleep.

His house is in disarray: An open suitcase is piled with clothes; metal almirahs have been emptied; the fridge has been pulled away from the wall and small bags stuffed with the family’s belongings; steel and plastic utensils and boxes are scattered around, ready to be carted away.

“I have [only] a 2,000 rupee note which cannot book me a truck for all my belongings," Raghav says looking around. 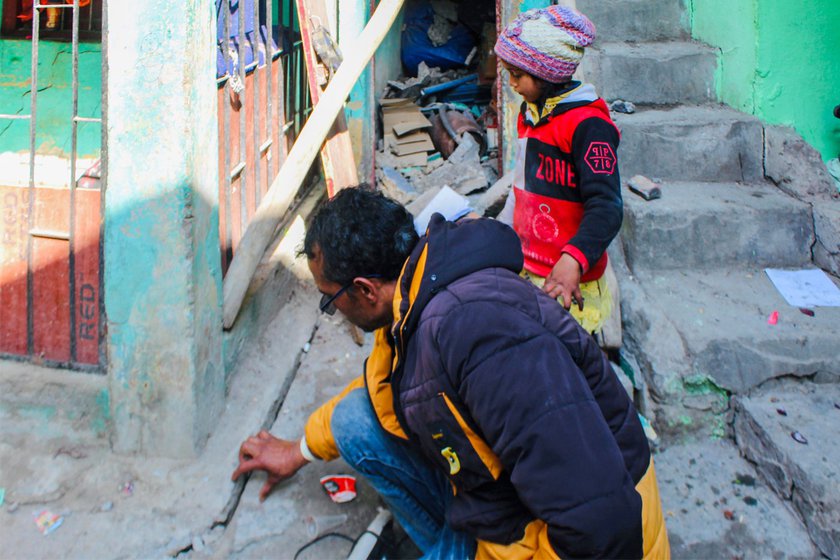 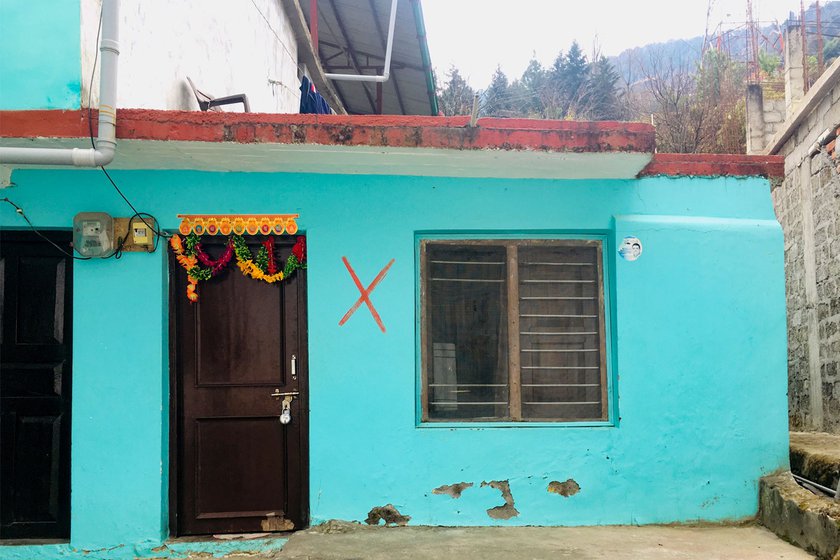 Left: Raghav and Ayesha are examining cracks on the ground in their neighbourhood. He says, ‘My story is the story of all Joshimath.’ Right: The red cross on a house identifies those homes that have been sealed by the administration and its residents evacuated 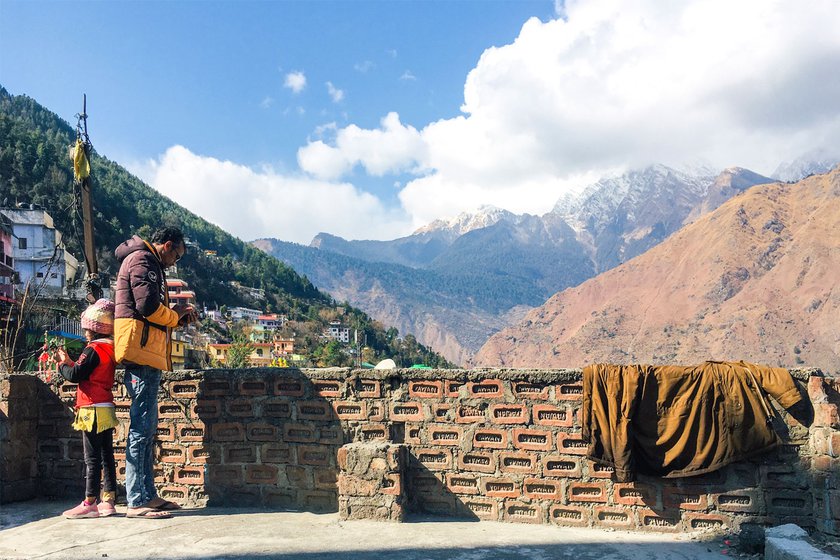 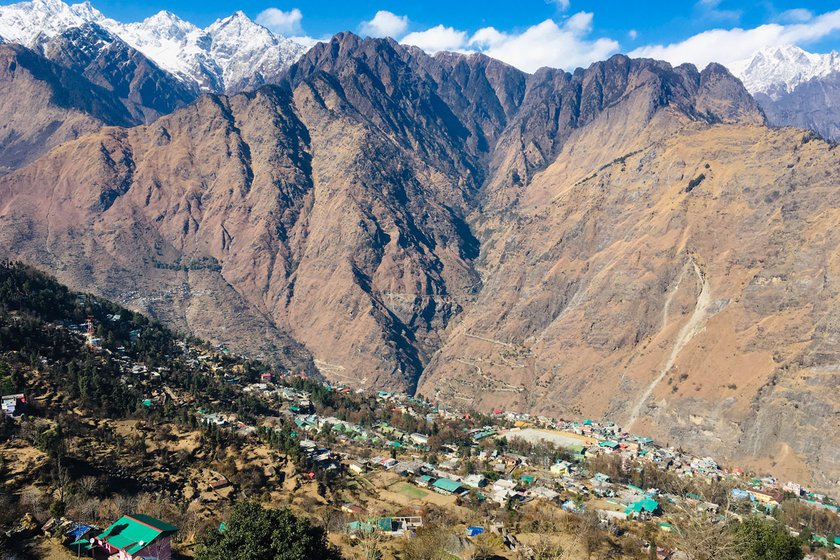 Left: Raghav and Ayesha on the terrace of their home. 'I want to come again to sit in the sun on my roof and watch the mountains'. Right: A view of Joshimath town and the surrounding mountains where underground drilling is ongoing

His wife Gauri reminds him that the district authorities “are announcing on the mic [microphone] to empty the houses within two days.”

He responds saying, “I will not leave Joshimath. I won’t run away. This is my protest, my fight.”

That was in the second week of January.

A week later, on January 20, 2023, Raghav has gone to fetch two daily wage labourers. The night before, matters deteriorated as Joshimath was lashed by heavy snow, setting off a fresh round of anxiety for those with unstable homes. By 1 p.m. he and the labourers are moving heavy household items like the beds and fridge through narrow lanes and loading them onto a truck.

“The snow has stopped but the paths are wet and slippery. We are falling down,” Raghav says on the phone. “We are finding it difficult to move our things.” He is moving his family to Nandprayag town about 60 kilometres away. There he plans to rent a house, close to where his sister lives.

Despite the thick layer of snow covering all habitation in Joshimath town, cracks stand out prominently as do the thickly-painted red crosses on outer walls. Residents have been evacuated where deep cracks showed up in the foundation of scores of houses, shops and establishments here. 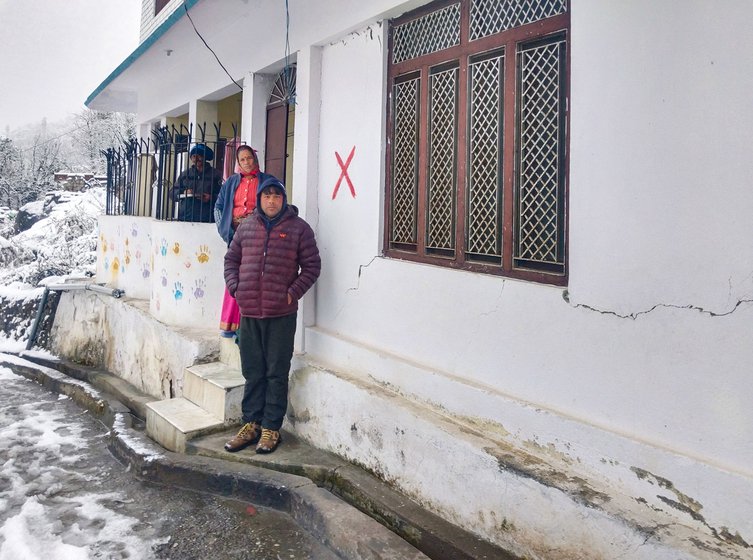 Left: Ranjit Singh Chouhan standing outside his house in Joshimath which has been marked with a red cross signifying that it is unsafe to live in. Right: A house in Manoharbagh, an area of Joshimath town that has been badly affected by the sinking

Ranjit Singh Chauhan, 43, stands on the snowed-in premises of his two-storey house in Sunil ward which bears a red cross. Singh along with his wife and three children have been provided temporary shelter at a nearby hotel. Most of their belongings continue to remain in their house. Despite the snow, Singh visits the house every day to keep an eye out for theft.

“I will try to move my family to Dehradun or Srinagar – anywhere safe,” he says. Chouhan runs a hotel in Badrinath, around 50 kilometres north of Joshimath, and its open for business during the summer months. Now he is no longer sure about what the future holds, but he is certain about one thing – the need to be safe. Meanwhile he awaits the Rs. 1.5 lakh interim relief announced by the Uttarakhand government on January 11, 2023.

Everywhere in this sinking Himalayan town, money is in short supply. Raghav is rueing not just the loss of his home but the share of money he invested in it. “I spent 5 lakh rupees to build the new house. I took another 3 lakh in loans that are waiting to be repaid,” he says. There were other plans too – of opening a garage and leaving his driving job as he has difficulty using his left eye. “It’s all in vain.”

The widespread damage is widely attributed to a series of development works, most specifically the recent tunnelling for the Tapovan Vishnugad Hydroelectric Plant by the National Thermal Power Corporation (NTPC). Currently, there are approximately 42 operational hydropower projects in Uttarakhand with several more on the anvil. The ongoing Joshimath disaster linked to hydropower is not the first .

Like others in the town, Raghav participates in a daily sit-in protest against NTPC at the local tehsil office. Among the first to join the protests, Anita Lamba says, “Our homes are ruined, but our town must not become desolate.” The anganwadi teacher in her 30s goes house to house asking people to “fight to remove NTPC and their disastrous projects.” 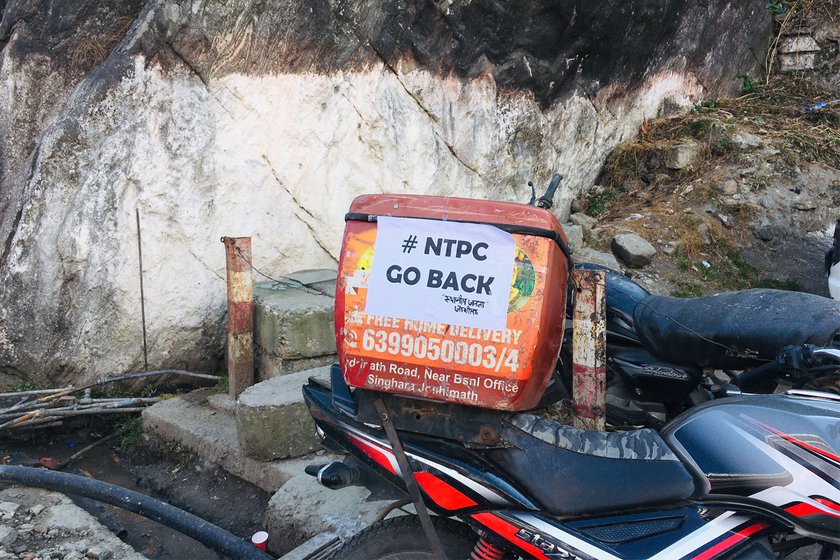 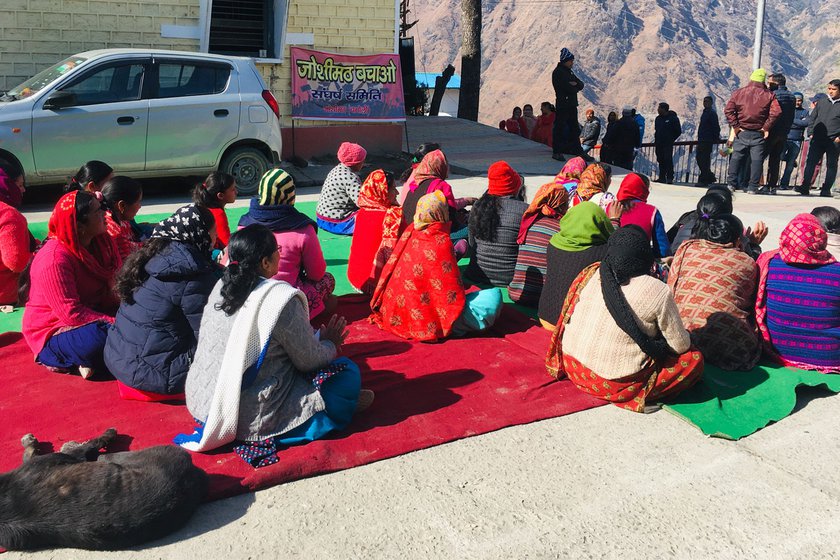 Left: The people of the town are holding sit-in protests agianst the tunneling and drilling which they blame for the sinking. A poster saying 'NTPC Go Back' pasted on the vehicle of a local delivery agent. Right: Women from Joshimath and surrounding areas at a sit-in protest in the town 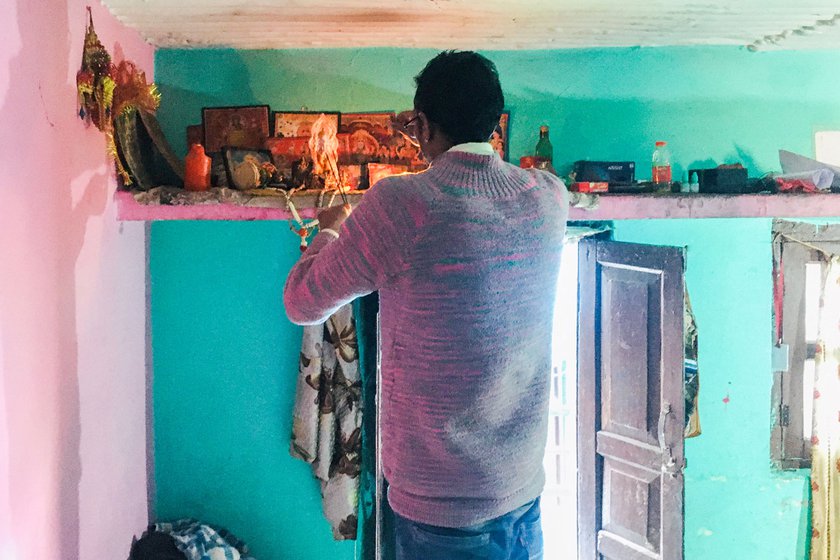 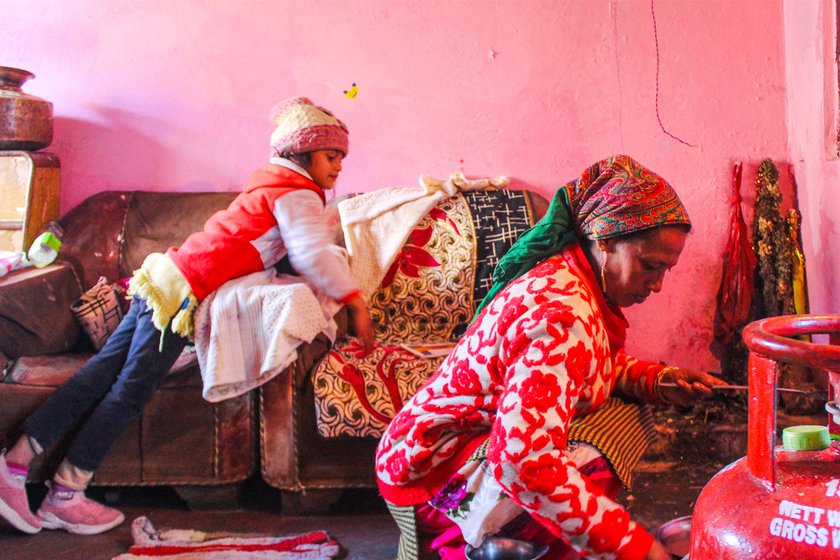 Left: The photos of gods have not been packed away. Raghav is standing on a chair in the makeshift kitchen as he prays for better times. Right: Ayesha looks on as her mother Gauri makes chuni roti for the Chunyatyar festival

In a 2017 article on ‘ Hydropower Development in Uttarakhand region of Indian Himalayas ’, published in Water and Energy International, authors Sanchit Saran Agarwal and M. L Kansal list a range of environmental problems from hydropower projects in Uttarakhand. More recently, the construction of the Char Dham project and the Helang Bypass, being built by the Border Roads Organisation (BRO) have made matters worse.

Atul Sati is an environmental activist who started another sit-in protest in Joshimath. He says that the push to popularise the pilgrimage to Badrinath has led to rapid construction of hotels and commercial buildings, putting pressure on land. The town is a base for pilgrims travelling to Badrinath temple – a major religious site, and for mountaineering sports. In 2021, both towns saw a combined tourist footfall of 3.5 lakh , over 10 times the population of the Joshimath (Census 2011).

Raghav has placed an incense stand with three burning sticks on a chair. Their perfume fills the small room.

All their belongings are in stages of packing, but the photos of gods and toys, have not been touched. Despite the gloom and sense of foreboding, his family is going ahead with observing Chunyatyar, a harvest festival signalling the waning of winter. Chuni roti is a type of flatbread that is made and eaten during the festival.

In the fading light of the evening Ayesha repeats her father’s slogan:

Manish Unniyal is a photographer and videographer based in Delhi.

Shadab Farooq is an independent journalist based in Delhi and reports from Kashmir, Uttarakhand and Uttar Pradesh. He writes on politics, culture and the environment.