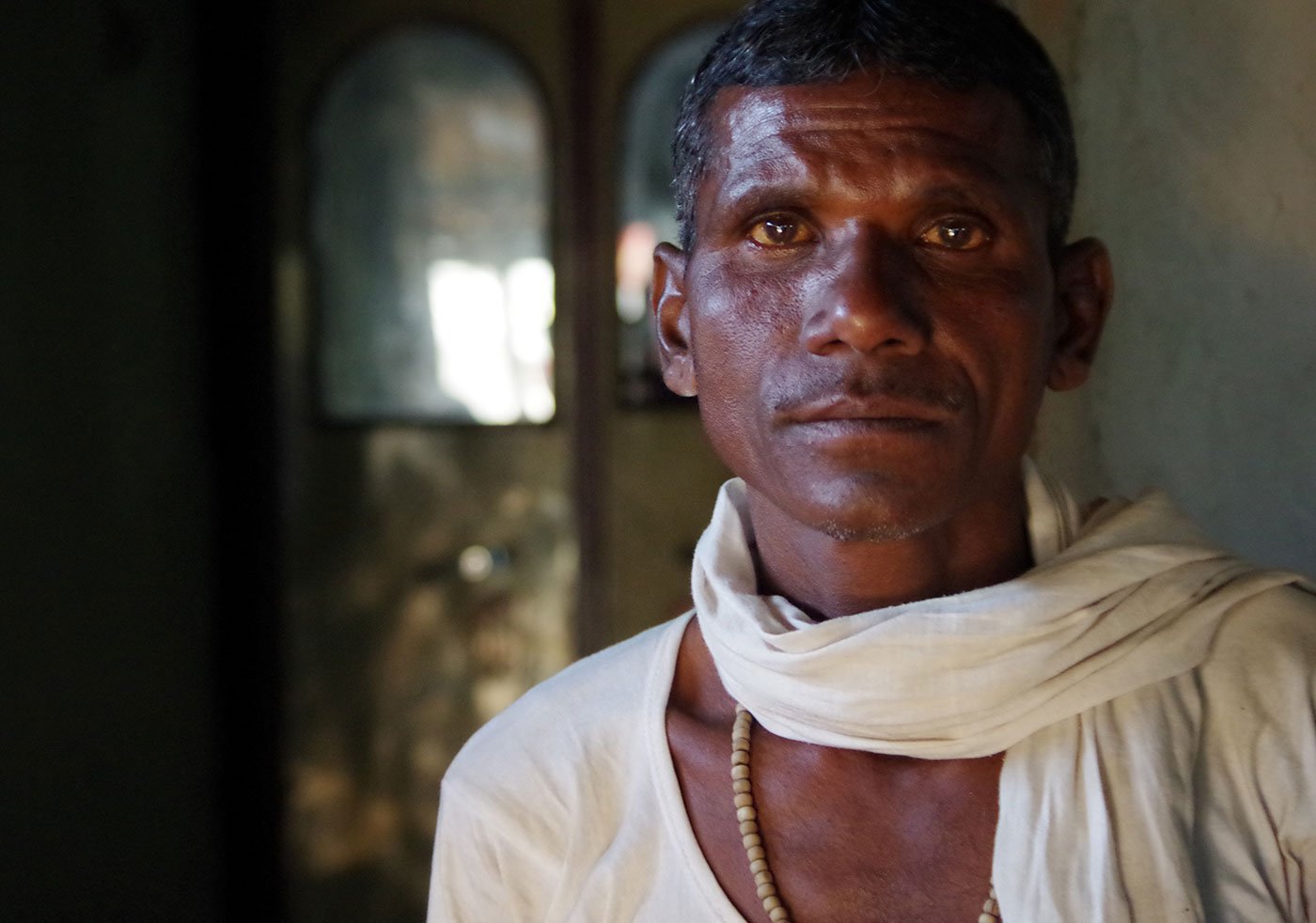 'This is the darkest period of our life'

In the already distressed regions of Vidarbha and Marathwada, another tragedy has gone all but unnoticed: suicides by the children of farmers grappling with debt

What would Vishal do today, if he were alive? Perhaps the teenager would fly kites, or play with his friends. Maybe he’d work with his father on the family’s two-acre field or pick up an odd job for a daily wage as he occasionally did. He wanted new clothes, his parents remember. That’s all he had asked for.

But Vishal Khule died last November, just 10 days after Diwali, by consuming a bottle of weedicide that his father had bought a few days earlier to spray on their crops. He was wearing a wrinkled white shirt and blue pants that day, the police report says. Vishal was not yet 16 years old.

“He collapsed here,” said his father, Vishwanath Khule, pointing to a spot beneath the window of the two-room shanty where the family lives. “His mother was in the adjoining kitchen, making chapatis . I was out there,” he added, gesturing toward the front yard. When her son collapsed with a thump, Sheela Khule rushed out to find Vishal lying on the floor, “a white fluid oozing out of his mouth.” The can of weedicide lay by his side, empty. Vishal died before reaching the hospital.

“This is the darkest period of our life,” Vishwanath said.

Dadham, with a population of 1,500, is among the poorest villages in this region. It is about 25 kilometres from Akola, a major city in western Vidarbha, Maharashtra’s cotton- and soybean-growing belt, which has been in the news since the mid-1990s for a continuing spell of farmers’ suicides. The region is reeling under successive years of drought and an agrarian crisis that has only gone from bad to worse.

While the unabated spell of farmers’ suicides in rural Vidarbha and Marathwada, Maharashtra’s eastern and central regions, has been reported on and acknowledged by the government, a related tragedy has gone all but unnoticed: suicides by the young children of debt-ridden farmers. (Farmers’ children have taken their own lives in the past, but newspaper reports indicate that the incidence has spiked in the past two years.)

While there is no specific data on suicides by children (under 18; or by youth under 20), in India as a result of agrarian distress, several studies and reports – from the 2005 door-to-door study commissioned by the Maharashtra government to subsequent studies on farm distress and suicides by the Tata Institute of Social Sciences and the Indira Gandhi Institute of Development Research – have pointed to the impact of debt and distress on children in peasant households. Many adolescent children of farmers inherit their parents’ debts and are forced to take on adult responsibilities, dropping out of school, tilling the fields, succumbing to depression, and for girls, being married off early so the family has one less mouth to feed. 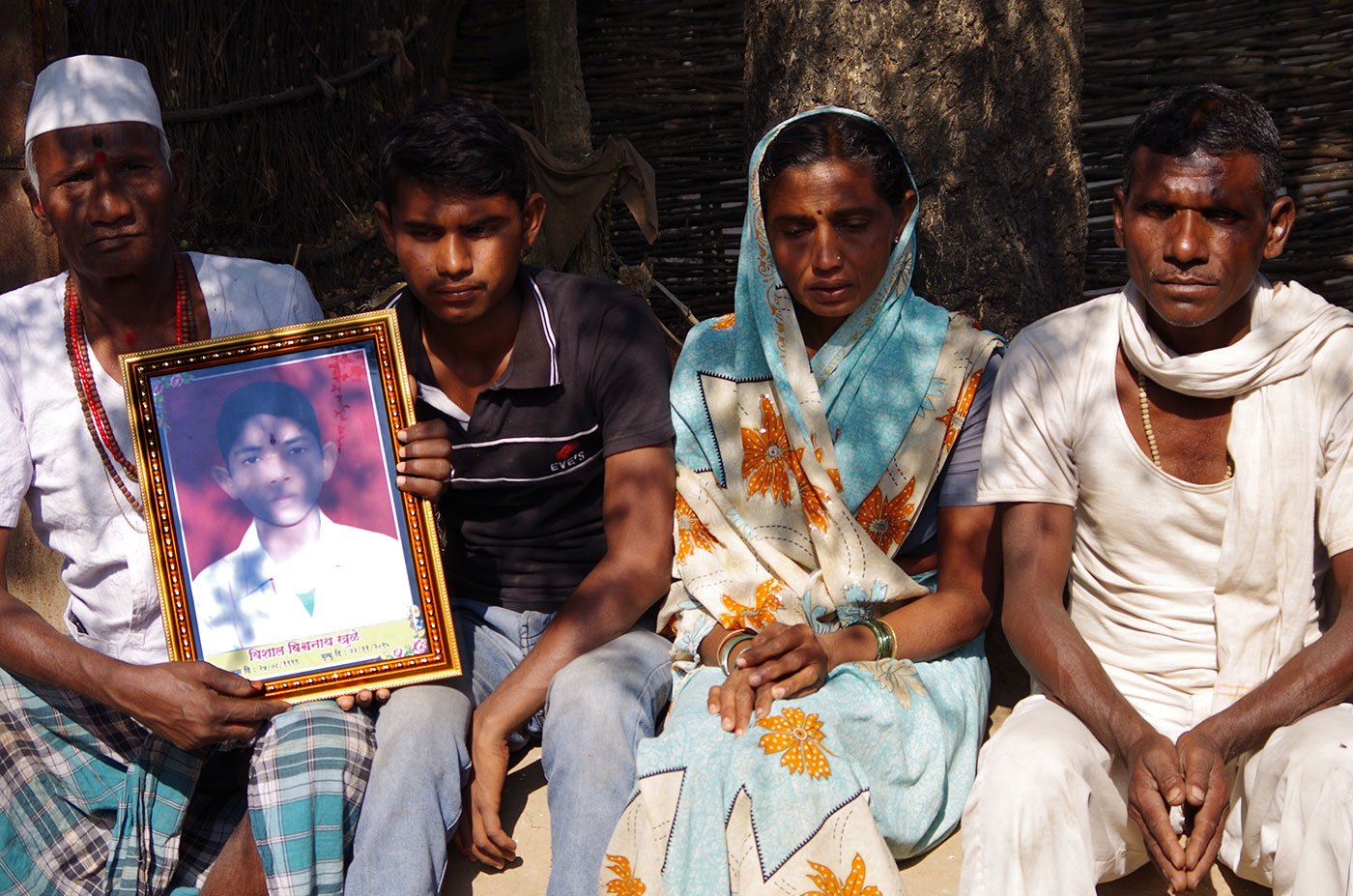 In Akola’s Dadham village: Vishal's father, Vishwanath Khule and his distraught mother Sheela (on the right); elder brother Vaibhav and their neighbour Jankiram Khule, Vishal’s ‘kaka’ (on the left)

Over the past decade, this writer has documented several such suicides, particularly in households where a suicide has already occurred . Sometimes farmers’ children commit suicide because they fear that if they don’t, their parents will, a phenomenon known as ‘altruistic suicide’. In one particularly poignant case in 2005, 19-year-old Neeta Bhopat hanged herself in Aasra village in Maharashtra.

In a neatly written suicide note in Marathi, she said: “If I don’t commit suicide, my father will [take his own life]; my family can’t even earn a thousand rupees a month. I have two younger sisters. My parents can’t bear the burden of our marriages when we don’t have enough to eat. So I am taking my life.” Nobody should be held responsible for her decision, she wrote. Committing suicide was the only way she could relieve her parents of some of their tension.

With a few months to go before the next kharif (monsoon) crops sprout, Dadham is still coming to terms with Vishal Khule’s suicide. Severe water scarcity is already testing the villagers this summer. The entire vicinity is arid. Local newspaper reports suggest that the groundwater table has fallen alarmingly. Dadham has to wait for tankers to supply water every alternate day, or people must trek several kilometres to fetch drinking water. And as if this is not difficult enough, no work is available in the village.

“This is the worst year” of a three-season drought, said Akola district collector G. Sreekanth in his office earlier this year. “We began preparing for the coming summer in September last [year],” he added, even before the 2015 monsoon had officially ended.

Like many districts in the Marathwada, Vidarbha and western regions of Maharashtra last year, Akola district received only 60 per cent of its average annual rainfall of 692 mm. “That’s around 500 mm rains,” said Sreekanth, “which may not sound all that bad, but we got 400 mm of that in two days, on August 4 and 5.” This meant the fields flooded and rainwater could not percolate into the ground.

Such a downpour and a long gap between rainy days is a new and alarming feature of the changing monsoon pattern, according to studies by the India Meteorological Department and Pune’s Indian Institute of Tropical Meteorology and other research institutions studying climatic aberrations. After August 5 last year, Akola didn’t see another drop of rain for 41 days, a devastatingly long dry spell. “Every crop failed: soybeans, cotton and tur, ” the collector added.

With no crops to sell, and domestic expenses and other exigencies to meet, the Khule family borrowed from moneylenders. According to their bank records, they also have unpaid bank loans of about Rs. 50,000 over the last five years.

The Khules, who belong to the close-knit Andh Adivasi community, are marginal peasant farmers. They have long been living hand-to-mouth, and Vishal Khule’s death has only made life more precarious. His mother barely speaks, recounts their neighbour, Jankinath Khule, who recently retired from the government service as a naib tehsildar (a minor-rank revenue official). Vishal’s two sisters, both married, are taking turns to return to the home to be with their mother, he said. Vishal’s elder brother, 18-year-old Vaibhav, has dropped out of school after Class 10 and has taken to working odd jobs. 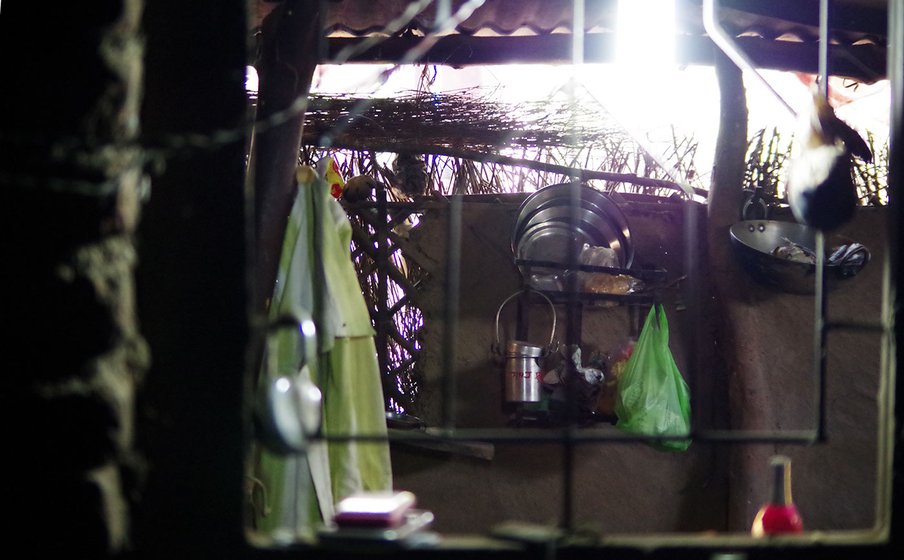 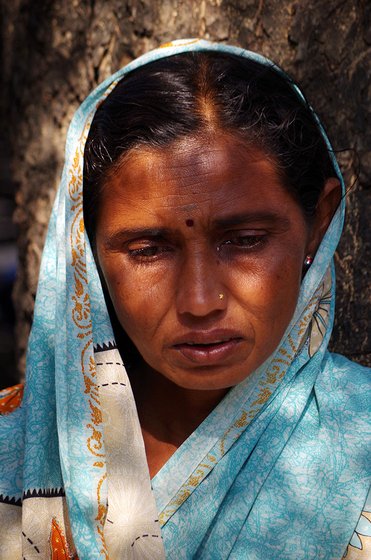 Left: Part of the two-room home where Vishal consumed a bottle of weedicide. Right: When her son collapsed with a thump, Sheela Khule rushed out of the kitchen to find Vishal lying on the floor

According to Jankinath Khule, a village elder, Vishal’s suicide was the culmination of his growing frustration with poverty, combined with a feeling of helplessness.

“He would often talk with me about the village poverty and the difference between him and his school mates,” said Khule, who Vishal affectionately called Khule kaka (uncle). “[Vishal] spoke of his parents’ troubles, and was resigned to the fact that this situation would never end.”

During the Diwali holidays in recent years, Vishal and Vaibhav would help their father in the fields. In 2015, the kharif crops – mainly soybean – had failed. Though the lentils they grew fetched a good price, inadequate rainfall had affected the yields. Vishal’s father planted green gram in winter, thanks to the state government’s distribution of free seeds to struggling farmers. But the relief measure did not work, villagers said, as there was no water or moisture in the soil to nurture the crop.

With no work in the fields, Vishwanath Khule said, the brothers went to Akola over the school break with friends to find a job that would pay a daily wage, but came back empty-handed. Vishal was upset that he could not afford a pair of new clothes for himself, says Khule kaka , or help his father with the cash crunch.

Vishal’s was not the only suicide of its kind. Last October, Latur district, about 400 kilometres from Akola, reported a suicide by the 17-year-old daughter of a farmer, a student in junior college.

In her note, Swati Pitale explained in some detail why she was committing suicide. She could no longer suffer the plight of her father, she wrote in Marathi, and didn’t want to be a burden on him. She would soon be of marriageable age, and didn’t want her father to incur additional expenses on her wedding. In the note, she made a plea to the banks and moneylenders her father owed. She asked them not to harass her father, for, she said, he would surely repay his debts once her elder sister was married.

Swati had stopped attending college for a while, as her monthly bus pass had run out and her parents did not have the money to renew it. Her mother borrowed the Rs. 260 for the pass from a neighbour, but Swati had missed crucial classes and wasn’t able to take the exam.

According to reports in the local newspapers, when Swati consumed pesticide in her family’s fields in the village of Kingaon, her father had left home for Karnataka, in search of work.

Back in Dadham, Vaibhav looks nervous. He says he must work to keep the firewood burning. At 18, he is now his father’s last hope – and perhaps his only support.