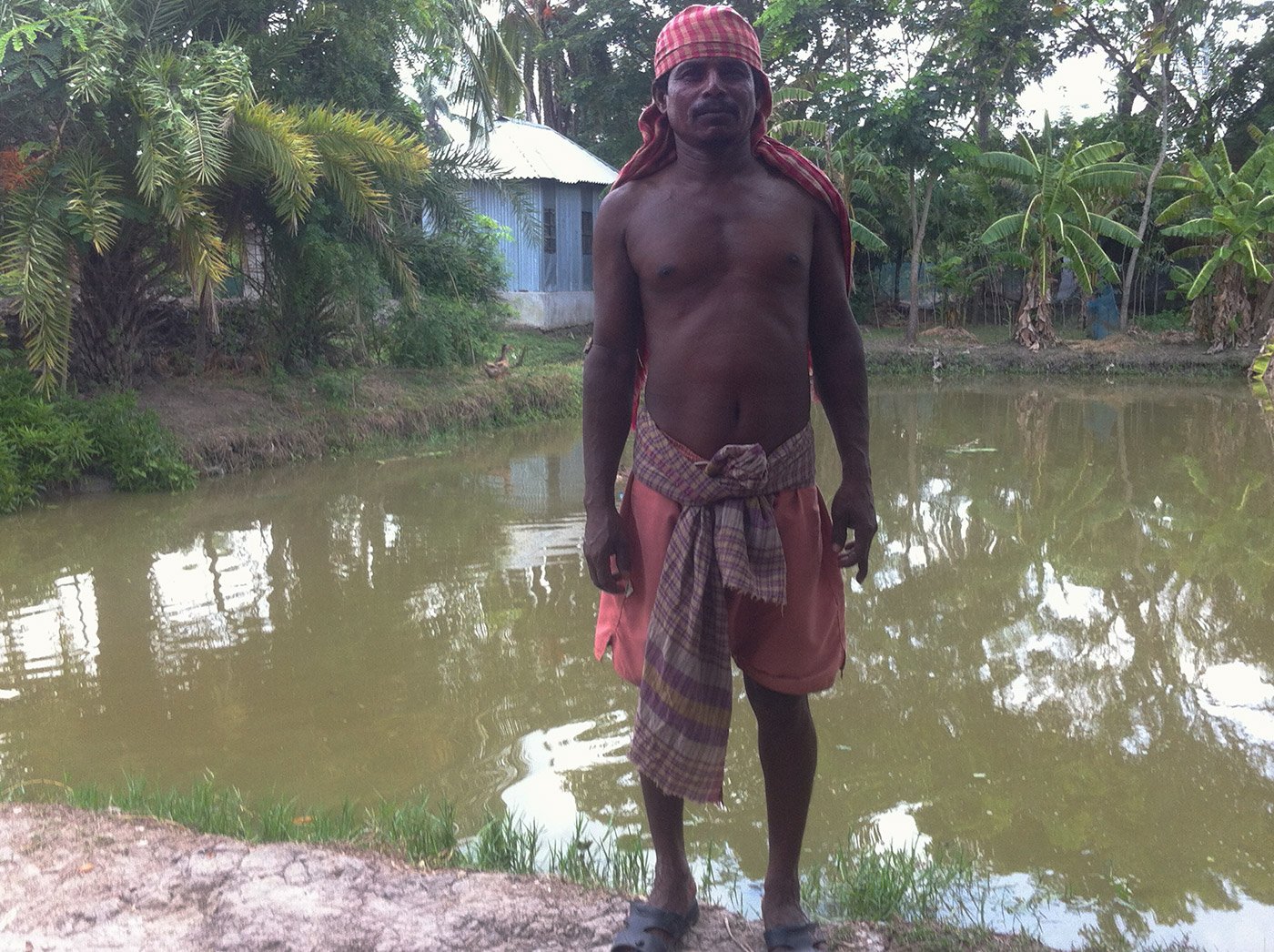 The sting of bees and the tyranny of tigers

The ‘mouleys’ or honey collectors of the Sundarbans work without safeguards in dense and dangerous jungles – encountering crocodiles, tigers and the diktats of the Forest Department

“I grabbed the kamot with my arms. You can see its teeth marks even now.” Nitai Joddar, a mouley (honey collector), remembers exactly when a kamot (crocodile) bit him, from hip to leg. It was on March 23 in 1980, and he had gone to the Raimangal river to catch fish.

Nitai, of Hemnagar village in the North 24 Parganas district of West Bengal, is 41 now. His father, a honey collector, started taking him along on his work trips to the jungle when he was 10. After the kamot incident, Nitai began wearing an amulet as a safeguard. Encounters with crocodiles are common on the riverbanks of many parts of the Sundarbans. People, especially fish workers, have been injured or have even been killed. 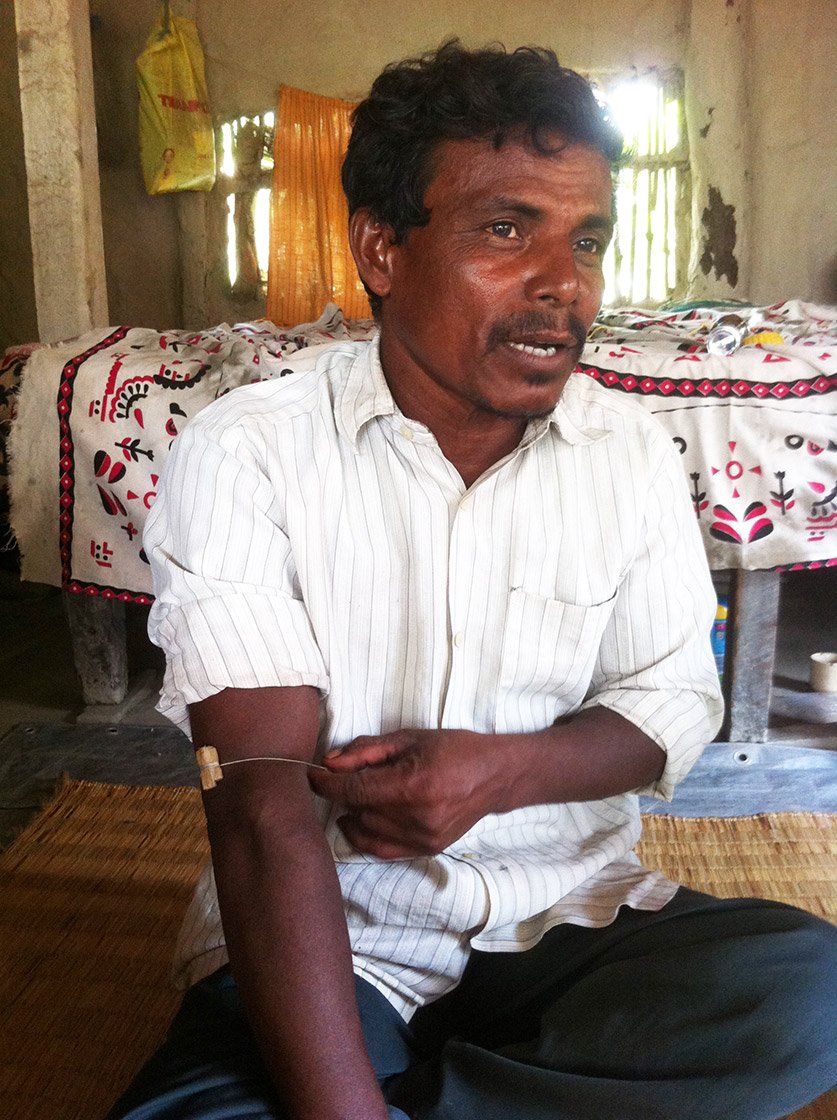 Nitai Joddar wore this armlet after being bitten by a crocodile, and has placed his complete trust in it to protect him in the jungles of the Sundarbans

Collecting honey for sale is a common occupation in the Sundarbans – and it can be very hazardous. For Nitai and others, just as real as the possibility of being attacked by a crocodile, is the threat of tigers while fishing or collecting honey from the dense jungles. According to the website of the Department of Sundarbans Affairs, “…men in the Sundarbans are attacked by wild animals – sharks, crocodiles, or tigers… especially when fishermen or honey collectors enter the dense mangrove forests…” Women, of course, are equally at risk of such attacks, though usually the community does not allow them to go on the extended honey gathering trips.

Honey is collected in the Sundarbans mainly from April to June. During these months, the state government bans the catching of fish, so that the fish can replenish themselves. This is when many fishermen become honey collectors and make two trips to the jungle, each lasting 15 days or longer. West Bengal is a major honey-producing state and exports a large part of its production.

Collecting honey requires advance preparations. The honey gatherers inform the Forest Department, rent a boat whose owner has a BLC (boat licence certificate) and borrow from the money lender or mahajan . Nitai’s son Sanjit Joddar, 23, explains: “If five or six people go together to collect honey, we take a combined loan of Rs. 10,000-15,000. The interest is 2-3 per cent, which we repay along with principle in 30-45 days. The loan is taken once a year.” 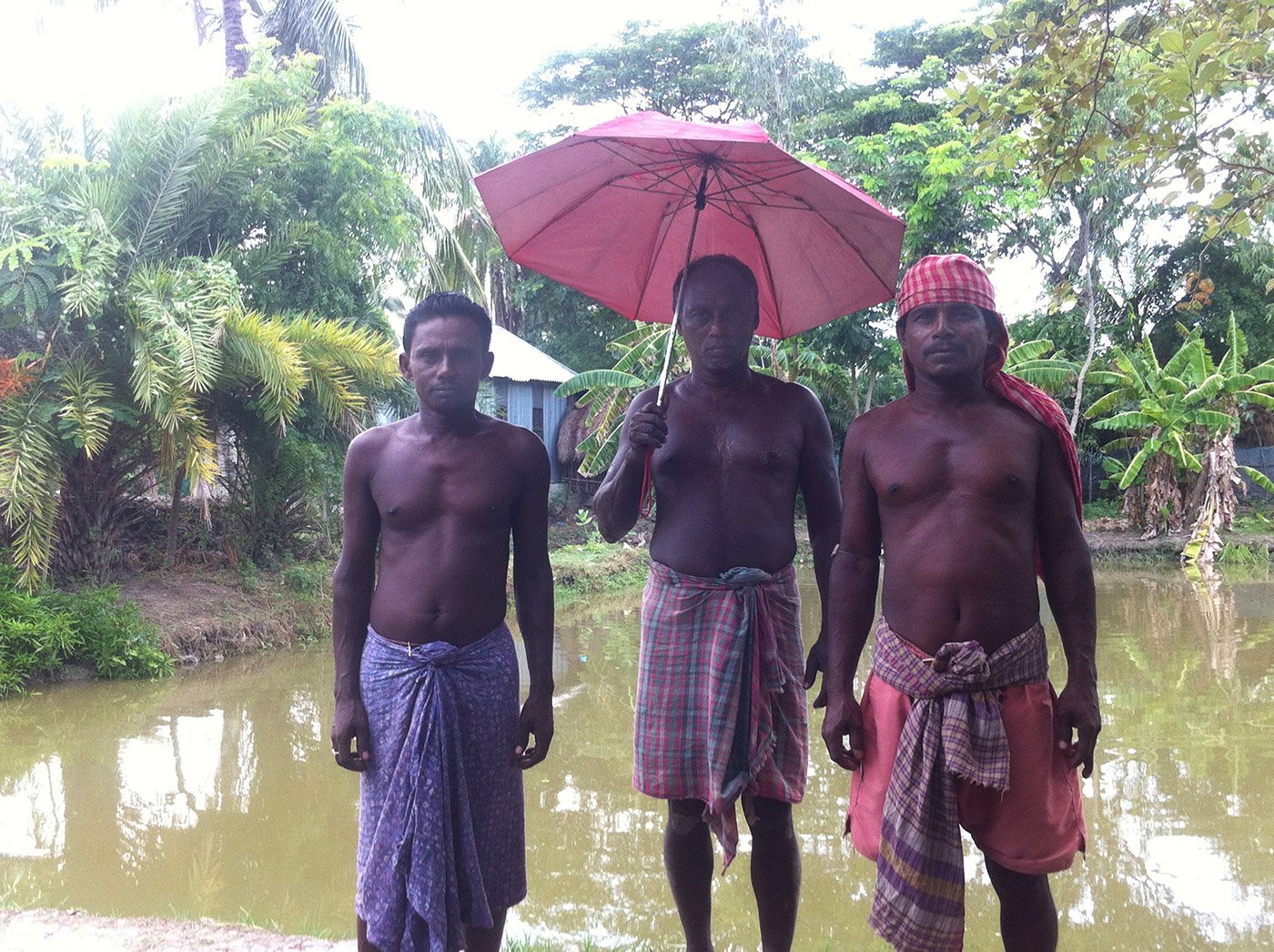 The loan is required to buy provisions for the 15-day journey. Renting the boat costs Rs. 2,800-3,000 for the season [a little over 60 days between April to June] of honey collecting. The boat owner is also paid in kind – with a few kilos of honey. Another Rs. 120 is paid annually to the Forest Department as insurance in case of an accident in the jungle. After clearing all debts and payments, each mouley gets Rs. 15,000-25,000 [for the entire season].

At times, the mouleys incur another expense: dacoits in the jungles steal from them or even kidnap them. Nitai recalls an instance when a few men were kidnapped last year and their families had to put together Rs. 2-3 lakhs for their release.

“We set off on when the sky is clear and the river is at low tide,” Nitai says. “It takes several hours to reach our location, depending on the tide. We leave the boat and enter the jungle. One person stays behind to row the boat along the bank. When some honey is gathered, it is deposited in the boat. We eat and sleep in the boat itself.”

The direction in which the bees fly guides the mouleys to the trees with hives. “We prepare bundles, layered with dry leaves and green hetal leaves, which are attached to sticks,” Nitai says. “We burn the bundles and the ensuing smoke curls up to the hives, driving away the bees. A sharp curved instrument is used to break the hive. We do not break the entire hive, since it needs to regrow.”

Sometimes the bees sense the threat and sting even before the smoke rises.  But Nitai and his co-workers have no use for ointments or protective clothing. “We only pluck out the sting with our fingers. Once a man was stung by 300-400 bees. He could not get up or eat for weeks!”

Nitai expresses faith in two things: his amulet and Bonbibi, protector of the forests and people, a highly revered deity in the Sundarbans.  “There are different chants to the goddess according to the difficulty of the situation,” he says. We ask him to recite a chant; he breathlessly rattles off one in Bengali that the honey gatherers use when leaving home for the jungle.

As often happens when in the Sundarbans, the conversation turns to tigers. And everyone has a story or two to tell. “Once a tiger confronted my friend and he froze with terror,” Nitai recalls. “I chanted some mantras to Bonbibi – but could not rescue him and the tiger killed him. I found the body and took it to his home. Many years ago, about 150-200 men surrounded a tiger in the jungle. Even then it carried away 1-2 people."

There was a time, he says, when the government rewarded villagers for killing tigers. “But now, one cannot touch them, because of laws.” Nitai, like others living in the Sundarbans, sometimes feels that the state protects the tiger more than the people. “We cannot even go to the forest in case we disturb the tiger’s sleep,” he jokes. But he knows that tigers are important and is a member of the local Forest Protection Committee, a part of the government’s forest management strategy. “If the tiger goes, Sundarbans goes. Nothing will stop people from entering and destroying the forests.”

We go to Nitai’s small and cramped house, where he stores honey in aluminium containers and cans on the floor. “Depending on which trees and flowers  – kewra, goran, khols i – you extract it from and the season, the colour and taste varies. But your commercial honey looks and tastes exactly the same through the year.” 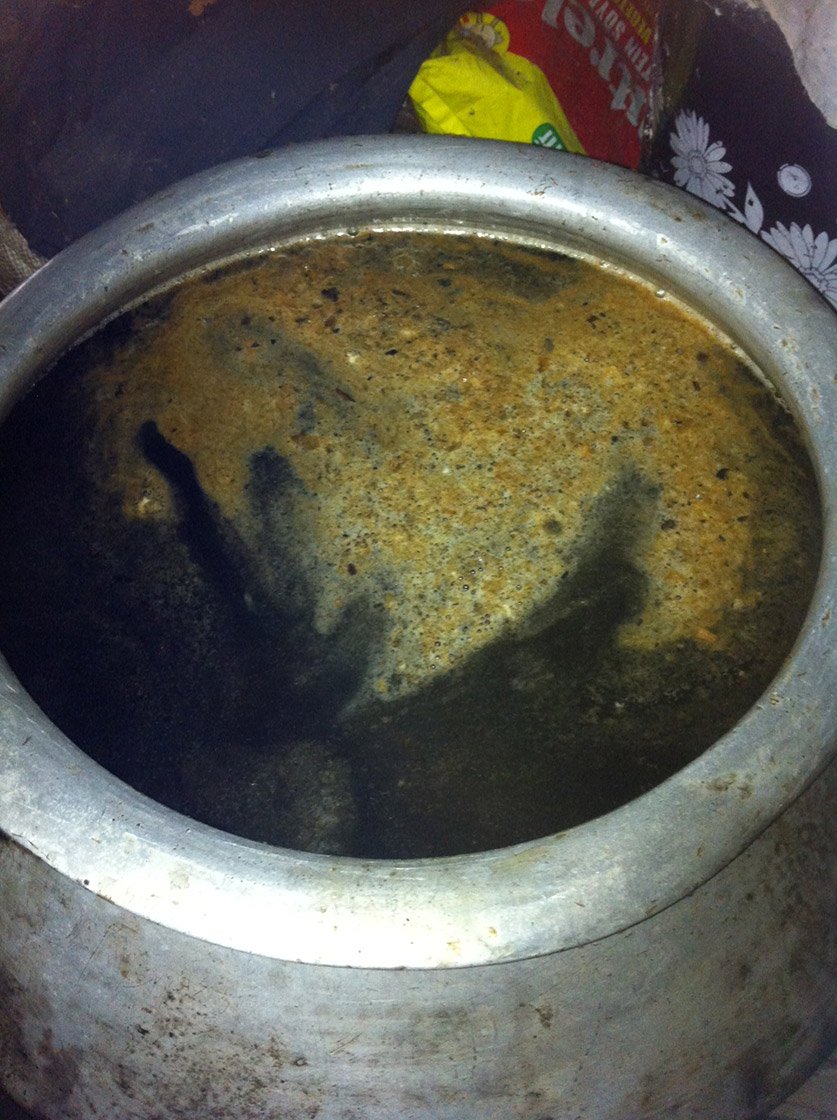 The honey is stored in an aluminium container. Its colour and taste vary according to the trees, flowers and seasons, unlike commercial honey which tastes and looks the same throughout the year

Usually, 6-7 individuals participate in a single 15-day trip and gather roughly 1-1.5 quintals of honey each. The mouleys are compelled to sell most of the collected honey to the Forest Department at a price fixed by the government. The price this year, Sanjit says, was Rs. 115 for a kilo – and in August 2016 the price at which the department sold the honey in the market was Rs. 300 a kilo.  The West Bengal Forest Development Cooperation Limited refines and markets it as the Mouban brand of honey.

This year, instead of all the collected honey, the Forest Department specified a quota that the mouleys were required to deposit. “They did not buy honey from our family because the department met its quota early,” Sanjit says. He and his family plan to sell the surplus themselves. “We collected 80-90 kilos and have priced it at Rs. 200-250 per kilo for the neighbouring village areas. In Kolkata, we can get a higher rate.”

In previous years, Sanjit says, “We could take home only five kilos. We had to deposit the rest with the Forest Department. They searched our boats for hidden honey. If caught selling in the market, our boats could be seized.”

Although Sanjit, like his father, is a fisherman and honey collector, he migrates for 2-3 months every year to Bangalore and Chennai to work on construction sites where he earns Rs. 350-400 per day. “My father and his friends have worked only in the Sundarbans. They have fallen in love with the forest and say there cannot be peace without it. My generation goes to bidesh [outside] to work. How do we feed our family just by catching fish and collecting honey?”

Sanjit had to drop out before completing his BA degree to help with his family’s earnings. He now has an 18-month-old son who he wants to educate. “My son should not go to the jungles. Too dangerous.”

But Nitai believes that those who migrate are not happy, since there are more chances of getting cheated or murdered in the big cities. To him, the dangers of working in the Sundarbans seem preferable.

Nitai Joddar, 41, started going to the jungles with his father, also a honey collector, three decades ago

In 2015, a Trinamool Congress member of Parliament, Pratima Mandal, highlighted these dangers in the Lok Sabha when she spoke of the issues faced by the honey collectors of the Sundarbans. She asked the central government to take safety measures and allot funds.

It may be too early to know if this has had an impact, but over the years a few measures have indeed been taken. Pradip Chatterjee, president of the Dakshinbanga Matsyajibi Forum (Fishworkers Forum of South Bengal), says, “There have been some improvements. Four years ago, the Forest Department would pay the mouleys only Rs. 42 per kilo of honey; now the rate is more than Rs. 100 for a kilo, and they are free to sell extra honey in the market. The department would earlier give only one pass of 15 days for honey collection, now they give two such passes.”

However, he says, nothing has been done to protect the men at work. “There is no provision for their individual safety or safety as a group.” And so, men like Nitai continue working in the dense and dangerous jungles without any safeguards.