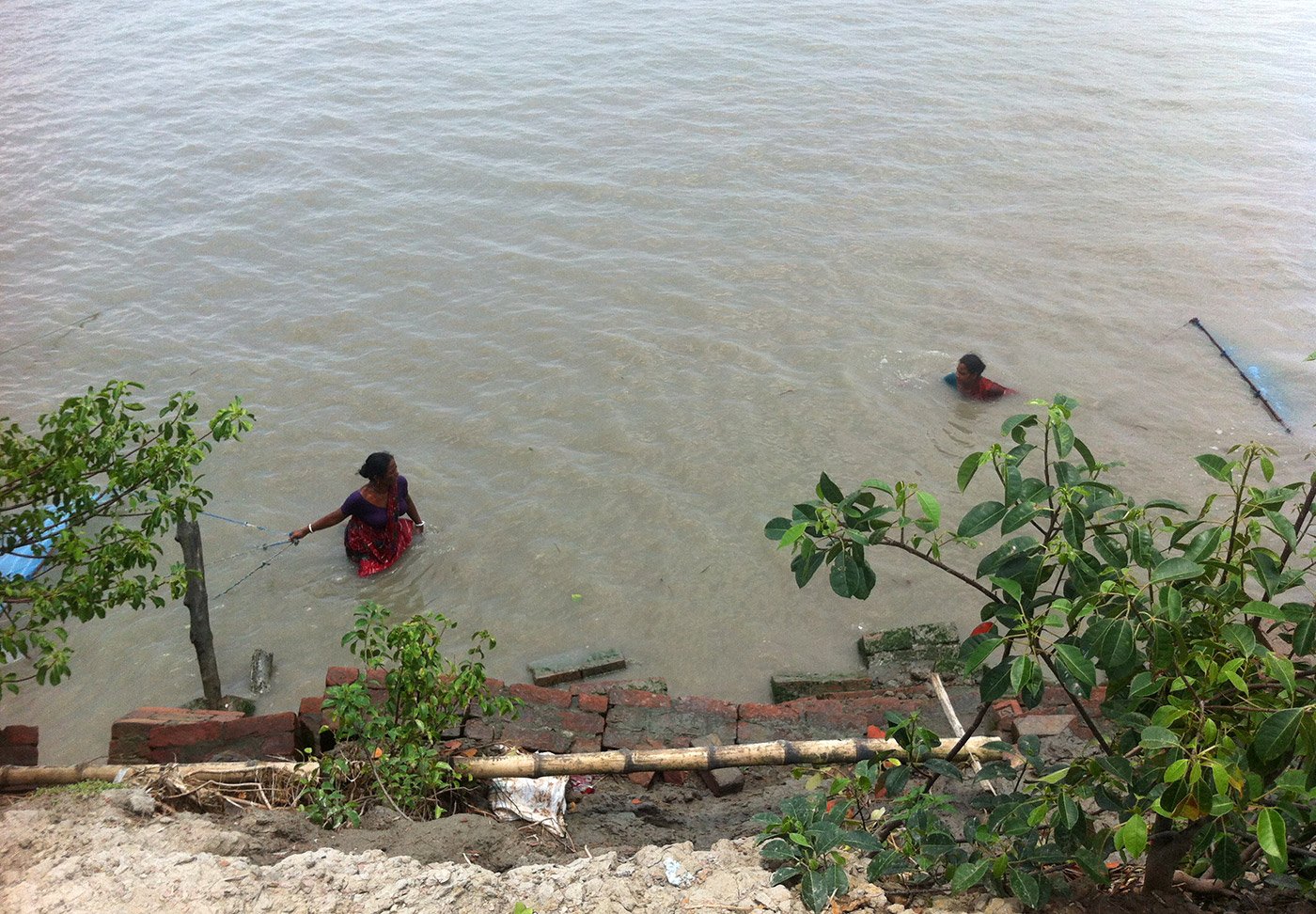 From river to plate: the journey of the Sundarbans tiger prawn

For village women in the Sundarbans, collecting tiger prawn seedlings is unrewarding and unsavoury work – though the delicacy fetches high prices for others later along the supply chain

Purnima Mistry walks out of the Raimangal river with her fishing net, water swirling around her waist. She has been swimming near the riverbank for half-an-hour, dragging the net behind her in search of tiger prawn seedlings.

On the riverbank, she sorts the contents of the net, separating the seedlings from weeds, twigs and other fish. Her saree and plait are beginning to dry under the hot sun. But Purnima has to get back to the river again. “I have to collect enough tiger prawn seedlings so that I can sell them. It will take another 2-3 hours,” she says.

Squatting on the muddy bank to sort the catch, Purnima talks about the long hours she spends in saline waters and mud, which cause skin infections and itches.  “Look how difficult our jobs are,” she says. “This is how the people of Sundarbans live and eat.”

Purnima started doing this work two years ago to support her family, which includes two daughters and a son. Her husband is afraid of water and cannot go fishing, which is the most common occupation here. So he grows vegetables for sale at home.

Is she afraid of encountering crocodiles and tigers – both common in some parts of the Sundarbans?  “Sometimes, I am scared of crocodiles; they have attacked people in this village,” Purnima says. “The tigers do not come to here because a security net near the forest keeps them away.”

Purnima lives in Jogesganj, a village of 7,000-plus people and houses scattered along the banks of the Raimangal river in Hingalganj block of West Bengal. Many of the women and children in Jogesganj, like in the rest of the Sundarbans, work as seedling collectors. This supplements their household incomes from the sale of fish and crabs, and of forest products such as honey and wood.

State government data [from 2009 ] shows that poverty drives more than 2 lakh people – of the 44 lakhs who live in the Sundarbans – to collect tiger prawn seedlings.

Shoma Mondal of Hemnagar village says this work is mostly done by women. “Men go after bigger catch like crabs, which fetch better returns [and for which they hire boats in groups]. Gathering seedlings becomes the women’s task, and in very poor houses, even children [do this work]. The returns are poor but there are no other options. At least one woman from every household in the village does this work.  We cannot do much agriculture, because for much of the year the soil and water are saline, except in the monsoons, when we cultivate rice.” 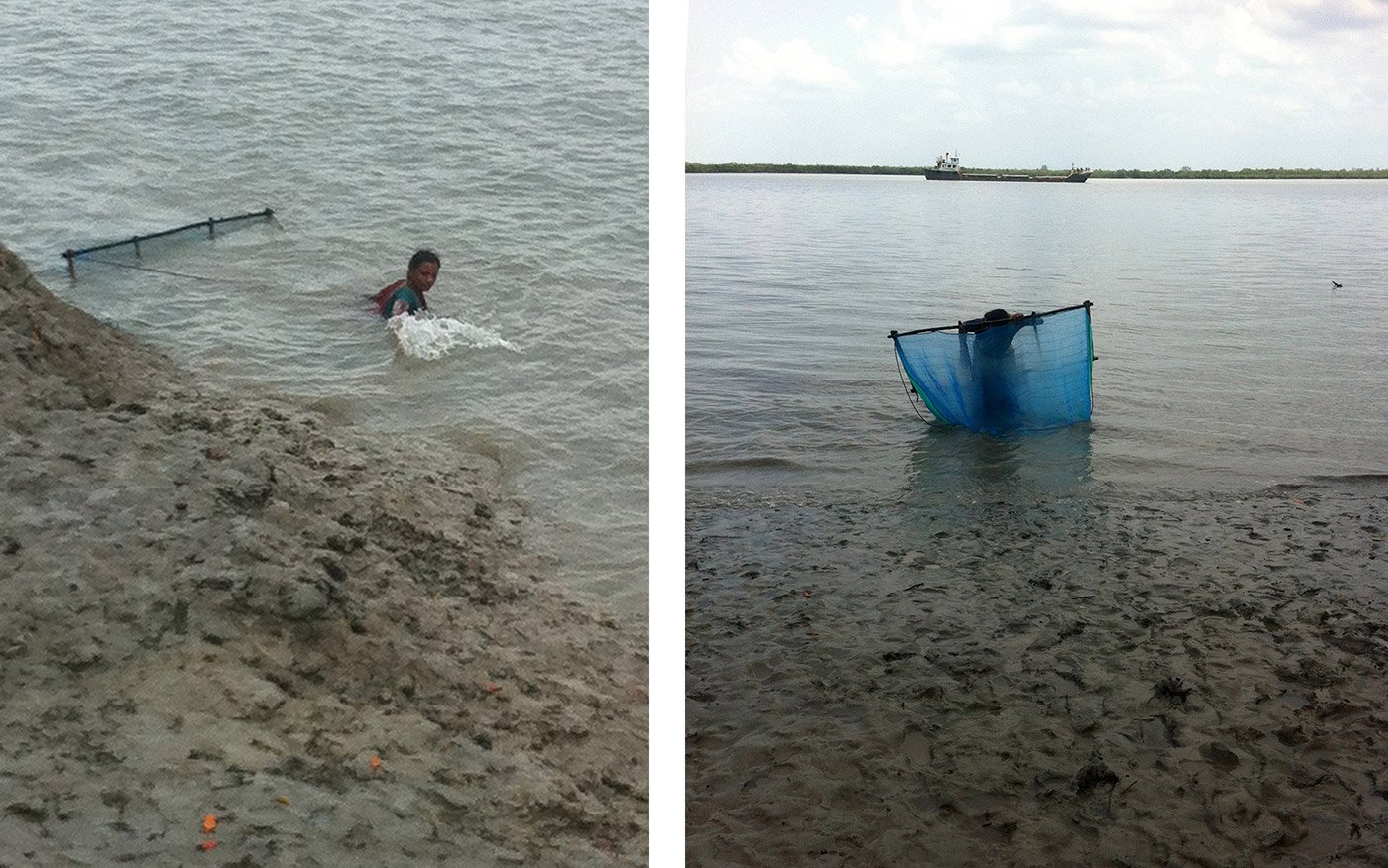 Left: The people who collect tiger prawn seedlings spend close to five hours in the water to get a sufficient catch. Right: A woman drags her net into the river at low tide, which is the best time to gather the seedlings

Shoma goes to the river almost every day at low tide in search of seedlings. Low tides are the best for a good catch – but they occur at different times. So Shoma sometimes goes to the river at midnight or at 4 a.m. “When it is pitch dark, we are unable to see if there are crocodiles or other wild animals nearby. In the daylight, at least we can see them and move away.”

The earnings of seedling collectors like Purnima and Shoma vary according to the season. “During winter, which is peak season, we get Rs. 300 per 1,000 seedlings,” she says. “At other times, the prices can drop to Rs. 100 and even sink as low as Rs. 60.”

On good days, the catch reaches 2,000 seedlings, but this is only a few times a year. Most other times, Shoma only manages to net 200-500 seedlings. “It’s enough money to go to the market [in Hemnagar] and buy essentials [like rice and pulses], but nothing more,” she says. 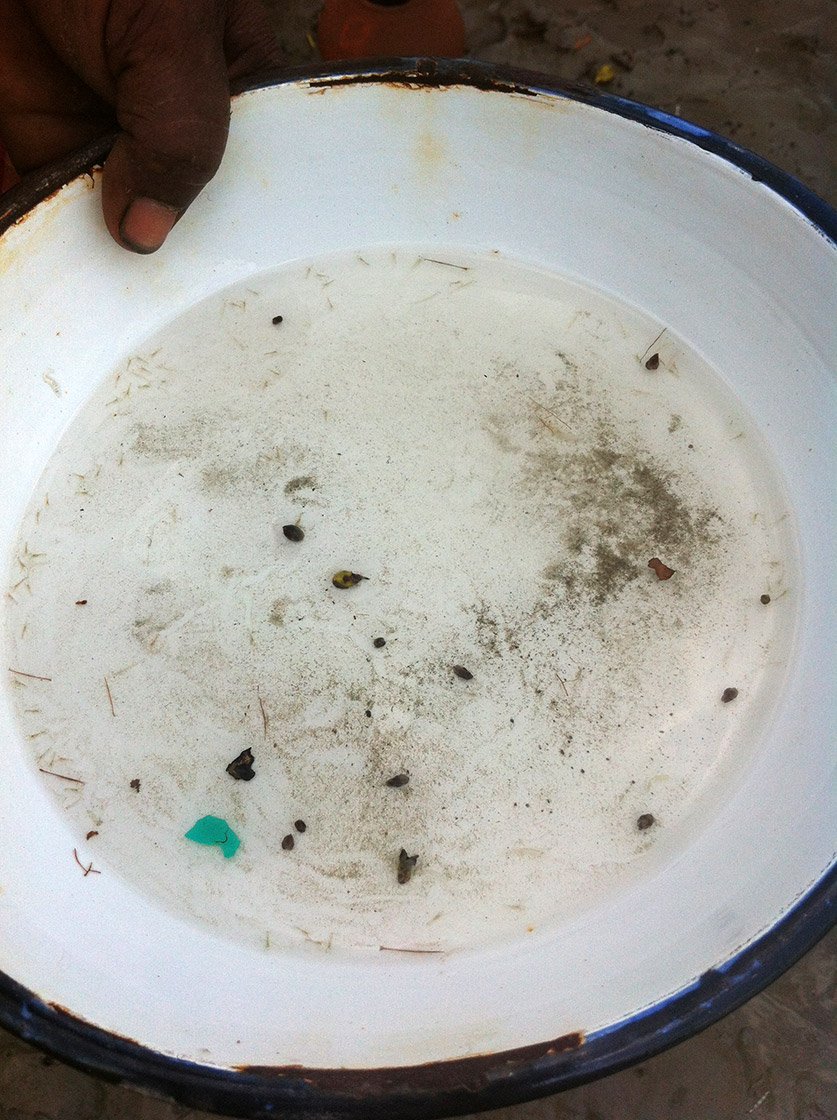 Tiger prawn seedlings are tiny, almost like strands of hair. Their price is fixed per 1,000 seedlings

During the winter months, from December to February, Shoma goes to Erode district in Tamil Nadu to work in a garments factory, where she stitches curtains and pillow covers. Although winter can bring the highest rates for the seedlings, many women try to not work in the biting cold river waters. Shoma’s husband Soumen Mondol works full-time in the same factory in Erode. She earns between Rs. 200-500 daily, he earns a little more.  Their five-year-old daughter stays back in the village with her grandmother.

The methods of collecting prawn seedlings have been criticised by environmentalists as well as the state’s Forest Department. The nets trap many other fish species besides the seedlings. But the women usually discard the other fish, which can deplete those species .  The dragging of nets causes soil erosion and weakens embankments meant to prevent rivers from overflowing.

Purnima however does not throw away the other fish. She has a pond near her home, where she harvests these species. “Those who do not have ponds have to throw away the remaining fish,” she explains, as she continues to sort the seedlings on the Raimangal riverbank.

Although the tiger prawn trade rests on the labour of the women in these villages, they are paid the least along the chain. After the seedlings are collected, men take over the profitable part of the trade.

Typically, middlemen visit the villages to purchase the seedlings from the women and sell it for cultivation in bheries. These are large artificial enclosures for brackish water aquaculture in Canning, Jibantala, Sarberia and other locations in the South 24 Parganas district. Here, the seedlings are cultivated for at least three months during which they grow in size.  Then they are sold in the wholesale markets of Canning, Barasat and Dhamakhali , and sent onward for export – often by men on motorbikes who carry the seedlings in plastic bags full of water. 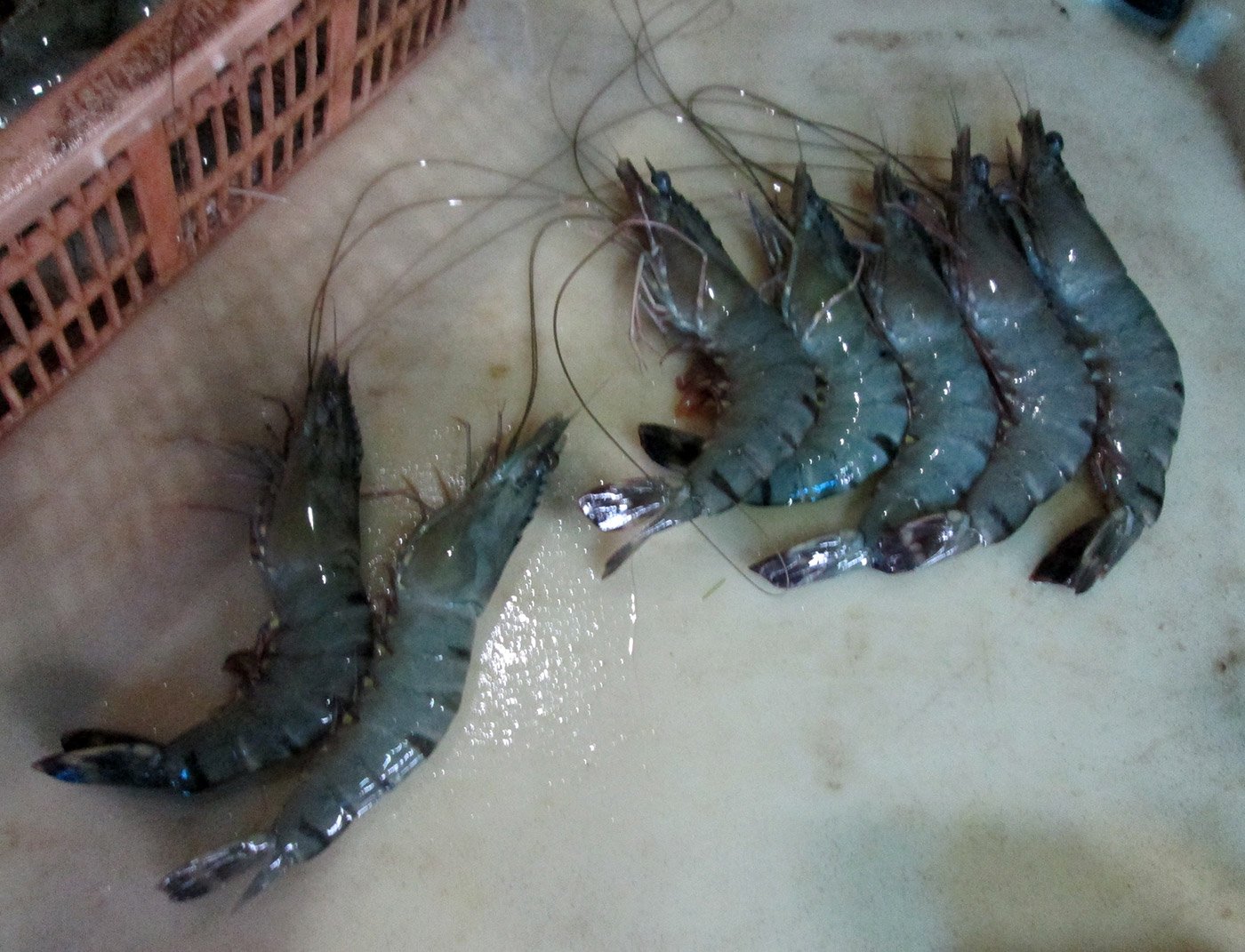 After cultivation in brackish water enclosures in South 24 Parganas district, the seedlings grow in size

Full-grown tiger prawns fetch attractive prices in the wholesale markets. Tarun Mondal, a wholesaler in the Canning fish market, says his main income comes from tiger prawns.  “It is good business. We buy them at a rate of Rs. 380-880 per kilo from the bheries , and we sell them for Rs. 400-900 [per kilo, depending on size]. Our profit margin is Rs. 10- 20 [per kilo]. Most of our supply is from the Sunderbans, from blocks such as Basanti and Gosaba. We sell them to agents who work for bigger companies that ultimately export them.”

India’s seafood exports were valued at $4.68 billion in 2015-16 ; shrimps constitute almost 70 per cent of these exports and are mostly exported to Japan, China and the United States. Tiger prawns, also known as black tiger shrimps, are an important part of shrimp exports. West Bengal is one of India’s largest shrimp producers and exporters of seafood.

Seedling collectors like Shoma and Purnima though see only a fraction of this money. The women are unable to demand higher prices because the agents determine their rates and control the trade. “In addition to the price of seedlings, the middleman gives us an annual deposit [of Rs. 200-500 per person], which we don’t have to return, " Shoma says. "The deposit forces us to sell only to him, and nobody else. We women are unable to gather in large numbers and bargain.”

But it is the labour of workers like Shoma and Purnima that sustains the wholesale and export markets in tiger prawns, and brings these expensive delicacies to upscale plates in India and around the world.
Urvashi Sarkar
@urvashisarkar07
[email protected]