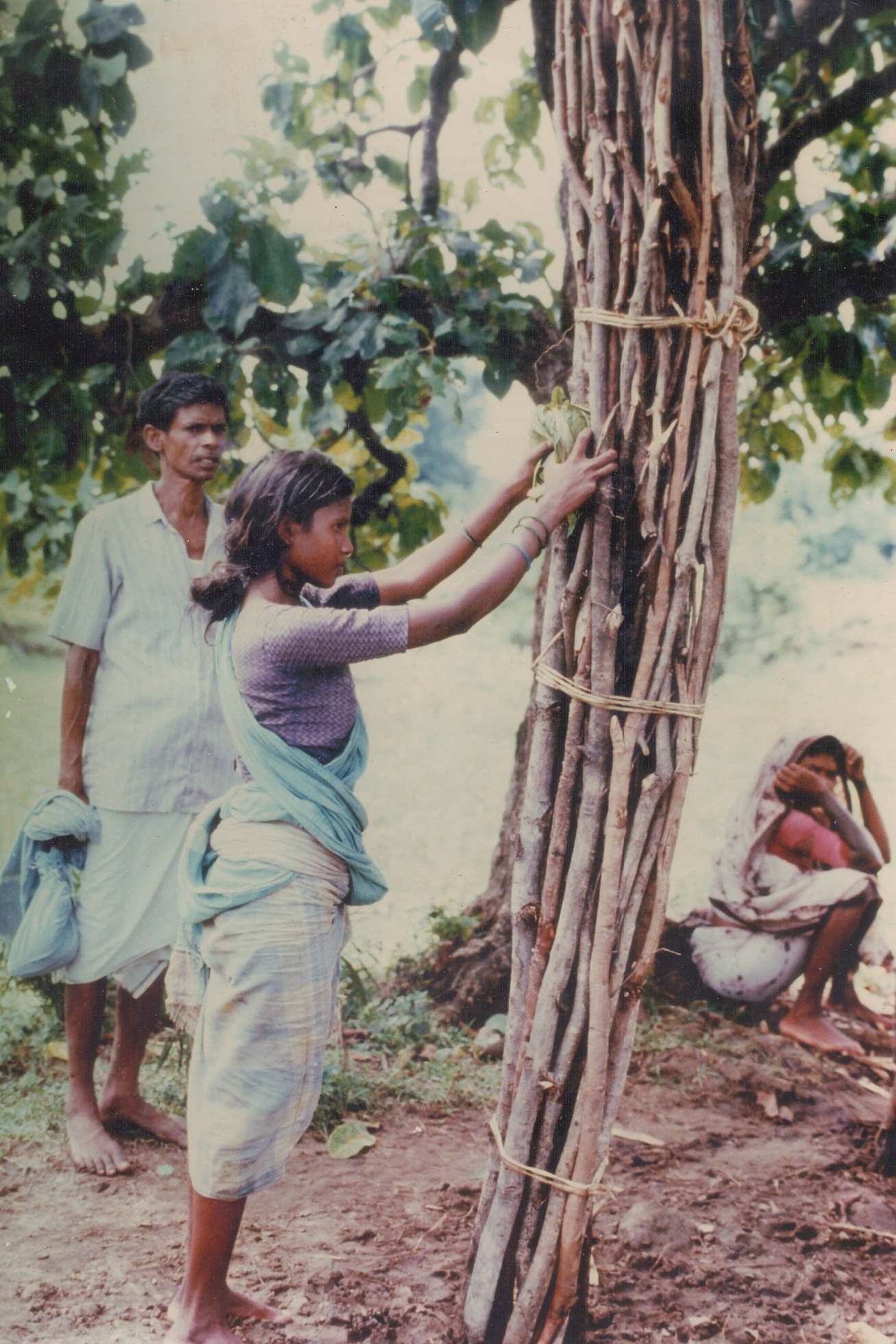 The hills of hardship

An extract from P. Sainath's 'Everybody loves a good drought' - stories from India's poorest districts

GODDA (Bihar): Dharmi Paharini is four feet three inches tall and weighs less than the 40 kg of firewood on her head. She has come to the haat, set up once or twice a week at Devdanmod, from her village Serkattiya, seven kilometres away. But before that she had to walk twenty-four kilometres to the forest and back to cut and fetch the wood, covering thirty-one kilometres in all. She will get eight or nine rupees for it.

The route runs through the Rajmahal hills and the terrain is rough. But Dharmi has to do this at least once a week to survive. She is from the Paharia tribe, one of the worst off in the country. Spread across the old
Santhal Paraganas division, there are about 20,000 Paharias in Godda district. Their fragile existence stays unchanged after decades of promises, plans and ‘progress’.

Poverty forces Dharmi and thousands like her – in the grip of mahajans (moneylenders/ traders) – to fell trees in order to survive. For many Paharias, wood is a vital source of income, Many also have to do this for a few mahajans who are into timber smuggling. ‘This leads,’ says Dr. Suman Daradhiyar of Godda college, ‘to massive deforestration, upsetting the ecological balance in a large part of the hilly areas.’ Dr. Daradhiyar’s study, Ecology of the Paharia Community in Santhal Paraganas, links this to ‘merciless exploitation of these poor and helpless people by the mahajans’. 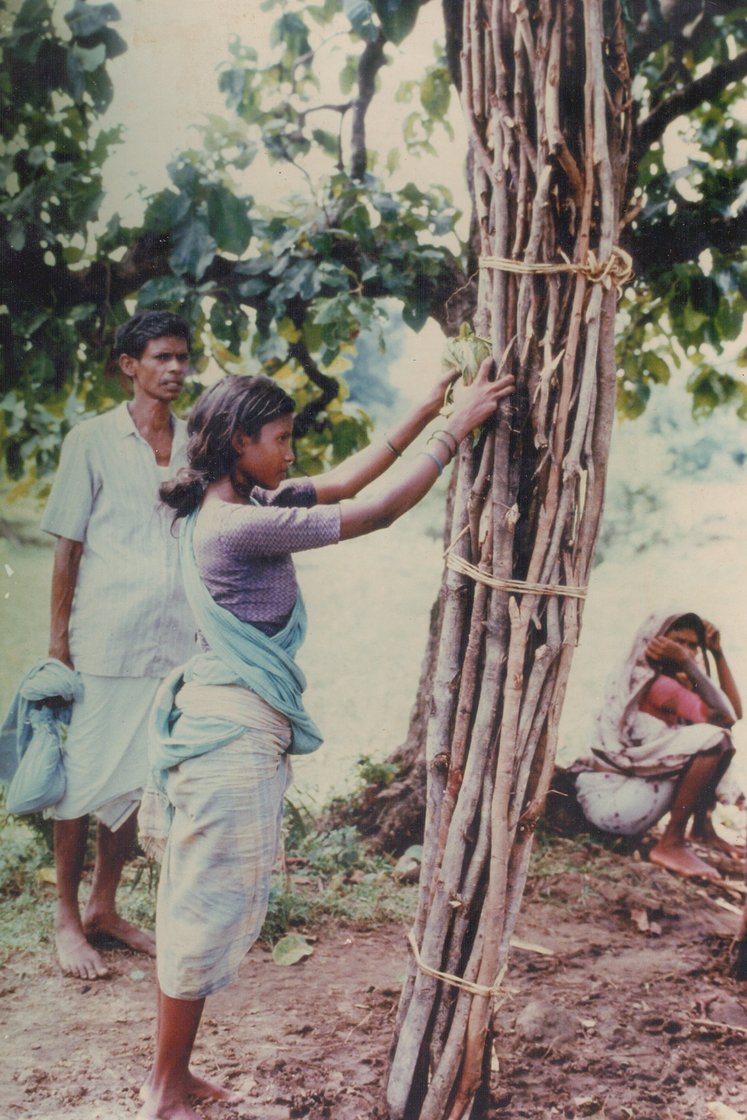 She was assessing the weight of her load of wood, a load bigger than her own body, at the start of the journey in order to balance it properly during the long walk ahead

At the haat, I tell Dharmi I find it hard it hard to believe she has come all that way with her load. The small crowd around us scoffs. Many women cover greater distances than Dharmi, say a dozen voices. There is only way to check this out. Starting the next day, we have to do the distance in different areas and hills by accompanying the Paharia women.

It doesn’t seem such a bright idea at 6 a.m. the next day, halfway up the Thethrigodda pahad route. To reach some of the Paharia villages, you have to cross two or three hillocks. We cover eight kilometres, a good part of it uphill. After much indecisive wandering, we see groups of Paharia women, sickles in hand, striding in single file towards the wooded areas. It is hard to keep pace with their swift, smooth movement. But we huff and puff behind them. Further down the trail we see more groups either moving towards the forest or towards their villages. Each woman has a huge bundle of firewood on her head, weighing 30 to 40 kg.

Behind the seeming vigour and physical strength of the Paharia women is the reality that only a few survive the age of fifty. In several Paharia villages in Godda, it is hard to find either males or females past that age. And many women don’t see forty-five.

Guhy Paharini walks over forty kilometres the day she takes the firewood to the haat. But that’s only a part of the long march in her short life. She has to walk six to eight kilometres a day for water.

‘The water source isn’t very far away,’ she says cheerfully (by which she means two kilometres). ‘But I can only carry so much at one time. So I have to do the same distance three or four times on some days.’ This is apart from her bi-weekly walk to the haat. That water source maybe ‘just’ two kilometres away. But it’s a steep and tough two kilometres that really taxes the body.

Guhy’s case is not unique. Most Paharia women have to slog in this fashion. As we slither down tricky slopes made even more dangerous by the monsoon, we learn what it means. Paharia women like Guhy walk a distance equivalent to that between Delhi and Bombay – four to five times a year.

The men practice shifting cultivation on the hillsides. This is sustainable, if you allow a cultivated plot ten years to regenerate to its previous level of forest growth. That was how the Paharias once functioned. But
debt, pressures on the land and survival needs have seen slash and burn agriculture returning to the same areas well before ten years. Robbed of that cycle, the forests go bare. Besides, overcultivation of the same areas brings declining returns.

Some strains of the beans cultivated here fetch high prices in Bombay. Not for the Paharias, though. ‘I have to sell my crop to the mahajan who gave me a loan,’ says Chandrashekhar Paharia. So he parts with it at a rupee a kilogram. The Paharias are almost never able to consume the item themselves. It all gets ‘sold’ to the mahajan. Dr. Daradhiyar’s study estimates that 46 per cent of a Paharia’s earnings go directly to the mahajan in repayment of debt. Up to another 39 per cent go to the lender indirectly (through the purchase of necessities etc.)

The balding hillsides look pathetic as we continue wheezing behind the women, down one hillock, up another. In the villages we pass, schools exist only as empty buildings or merely on paper. It’s almost
impossible to find Paharia women who are literate.

It isn’t easy to move twenty metres ahead of the women, taking photographs. Just when we think that we can no longer take the scorching heat and pace, they stop on the slopes to rest and drink water from a stream. That gives us a break to soothe our bursting lungs and shrinking egos. They have been walking for over three hours now.

Dr. Daradhiyar’s studies show that the streams here are iodine-deficient and of ‘a very poor quality’. This seems to have much to do, he says, with ‘the miserable general health’ of the people here.

No water supply systems worth the name exists here. Years of neglect have ensured that. So the Paharias suffer from a range of water-borne diseases. These include diarrhoea, dysentery and liver-enlargement. Many also suffer chronic diseases like tuberculosis, goiter and sickle cell anaemia. Besides, this is malaria territory. Gandhe Paharia, at forty-five the oldest inhabitant of Dorio village, says: ‘If a man falls very ill here, there is no hospital nearby. We have to carry him on a cot tied to bamboos for perhaps fifteen kilometres on this terrain’.

The women have finished drinking water and try to answer our questions. Here, a woman’s ability to fetch water is on test when she moves in with her future in-laws. Among Paharias, the marriage ceremony itself can come much after the woman moves in with her in-laws.

Etro Paharia, an elder of the Upar Sidler village in the Sabdarpaharia block, says water is a vital test. ‘Only when a girl is capable of fetching water in our conditions is she accepted’.

Giridhar Mathur of the Santhal Paharia Seva Mandal, who has worked among the tribe for fourteen years, feels the ‘probation’ aspect is exaggerated. He agrees that the male’s work abilities are not similarly on test. But, points out Mathur, the woman too can reject the male on other grounds after moving into his house.

The descent between Tethrigodda and Bhoda Khota is steep, slippery and strewn with sharp stones. The Paharias don’t seem to care. ‘Roads here,’ says Mathur, ‘are a sign of exploitation, not development.’ He has a point. Paharias closer to the plains are more in the grip of mahajans than those in the villages on the hill tops.

Such ‘development schemes’ as have come here have never involved the Paharias themselves in decision-making. One experiment saw the Paharia families being given two cows each. The Paharias do not milk cows – surely the milk belongs to the calf?

The Paharias do not consume milk products either, but no one knew this. What they do consume is beef and quite a few of the ‘loans’ were thus consumed. Others tried using their cows as draught animals, leading to their death in the difficult terrain. Some of the poorest people in the country then made repayments on loans they had never sought.

Government funds, points out Mathur, have only ‘fattened the battalions of contractors’. Bullied by corrupt officials, the Paharias retreat further into the mahajan’s grip. Madhusingh, a politically aware Paharia, sums it up simply. ‘Officers are a transient reality. The mahajan is a permanent reality.’

Political movements have had limited impact. A CPI-led agitation freed Paharia land from mahajan control in the ’60s and ’70s. But the state failed to follow up and status quo ante was restored. Many NGOs, some of them well meaning, have worked years in this region with no success.

Dr. Daradhiyar and his co-investogator, Dr. P. K. Verma, believe that the tribe is dwindling. The government denies this but accepts that such a risk exists. To fight this, it has announced more programmes that are unlikely to touch the Paharias but seem promising for the contractors and mahajans. ‘Meanwhile,’ says Madhusingh, ‘our forests are disappearing. Our land is less, our agony us more.’

When we reach the haat way beyond Paharpur, it is twenty-four kilometres from where we first saw the
women. Through the day we have hoofed forty kilometres. It isn’t amusing to remember that I have to repeat this process during the next eight days. The women sell their bundles of firewood weighing 30 to 40 kg in front of us – for five to seven rupees per load.

In Godda next morning, still aching in every limb, I see the ‘Freedom Pillar’ set up in 1947. The first name is that of a Paharia; in fact, most of the martyrs listed on it are Paharias.

The first to die for freedom, the last to benefit from it.

The Hills of Hardship was also chosen and published in Ordfront's Greatest Reporting of the 20th Century .