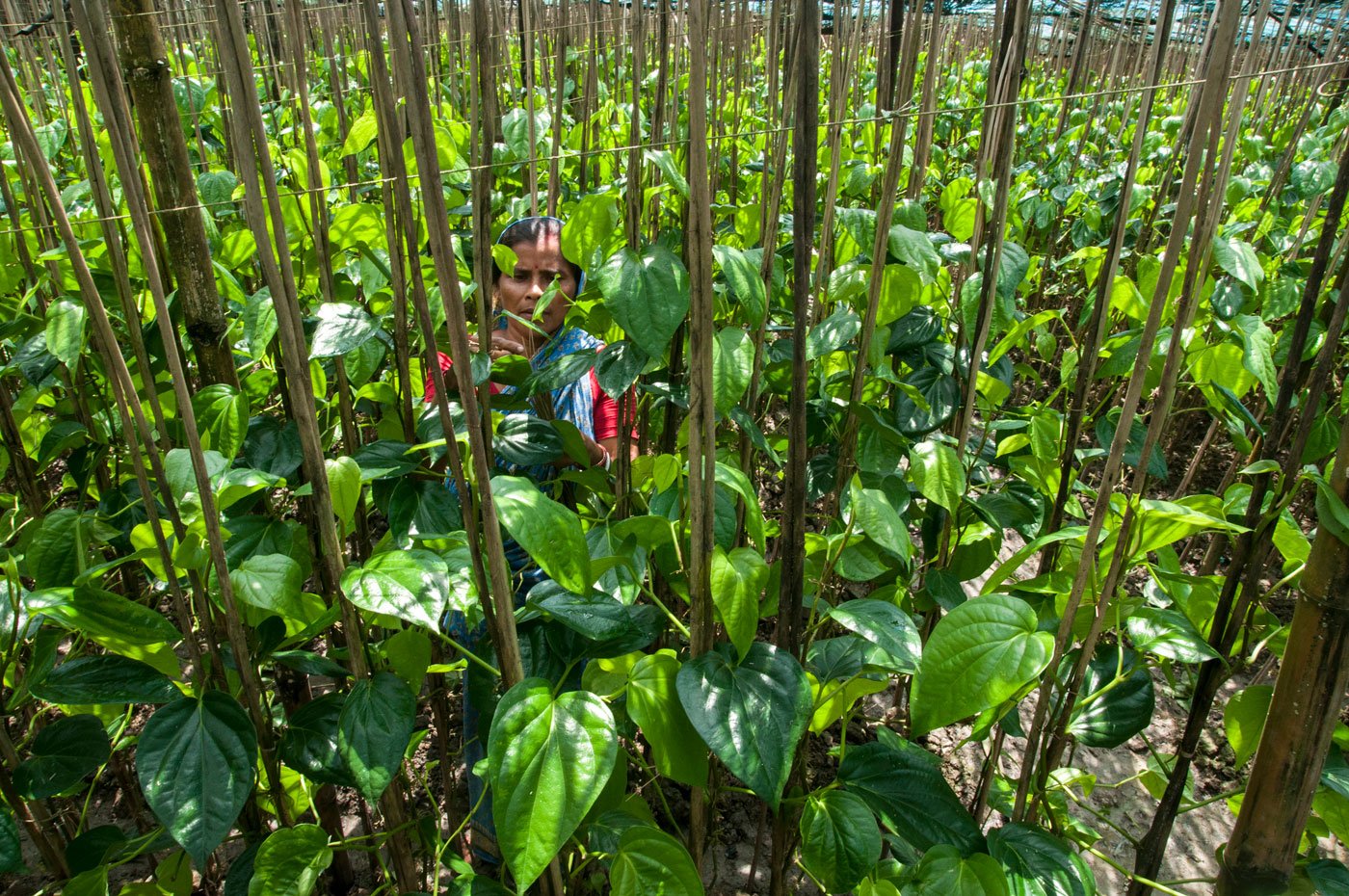 A small, remote island in the Sundarbans, West Bengal, which has endured many disasters, is relying on its own resources to make it through the Covid-19 crisis and lockdown

“We struggle for our survival every day in the Sundarbans. Though the coronavirus has created a temporary deadlock, we know that we will survive. Our fields are full of potatoes, onions, bitter gourds, snake gourds and drumsticks. There is no dearth of paddy either. Our ponds are full of fish. So there is no question of us dying of starvation,” says Saral Das, speaking on the phone from Mousani.

While the nationwide lockdown is disrupting food supplies across the country, it is no cause for concern in Mousani – a small island spread over 24 square kilometres on the western side of the Indian Sundarbans. “Due to the lockdown, the vegetables and produce that used to go from here to Namkhana or Kakdwip markets on boats every day cannot be sent that way now,” Das says.

The ‘special boats’ meant for emergencies still ferry some vegetables from Mousani to the wholsesale markets in Namkhana and Kakdwip, located between 20 and 30 kilometres away. The journey takes around 30 minutes by boat, but from there the trains and trucks that usually carry the produce to Kolkata are barely operational now.

Mousani’s three main crops – paddy, bitter gourd and betel leaves – are in great demand in Kolkata’s markets. “Therefore, it is a matter of concern for the city as to where it will get its sustenance from,”says Das, 51, who works as a clerk in the Bagdanga Cooperative School on Mousani island. He owns five acres, which he rents out to tenant farmers, in Bagdanga village. 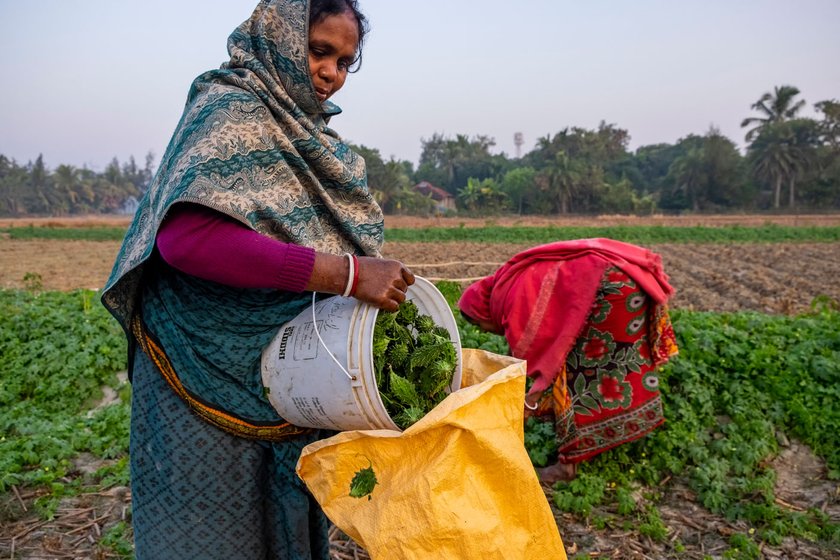 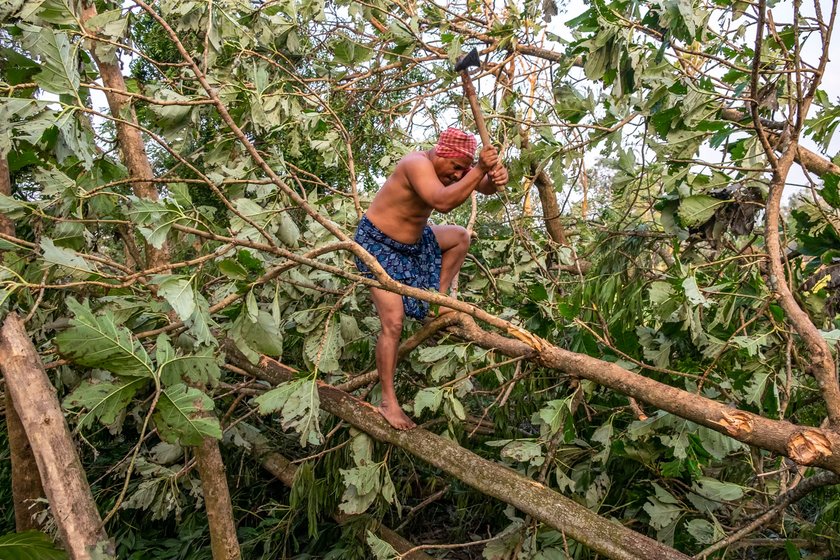 While the nationwide lockdown is disrupting food supplies across the country, the people living on Mousani island in the Sundarbans are not worried: 'The vegetables and produce that used to go from here to markets on boats every day cannot be sent that way now', says Saral Das (right) of Bagdanga village on the island (file photos)

Surrounded by rivers and sea, the cluster of over 100 islands of the Sundarbans in West Bengal are almost disconnected from the Indian mainland. In Mousani, the Muriganga river (also called Baratala) flows to the west, and the Chinai river is at the east. These waterways help connect the roughly 22,000 people (Census 2011) on the four mouzas (villages) of the island – Bagdanga, Baliara, Kusumtala and Mousani – to the mainland by boats and launches.

The inhabitants of the island, which is located in Namkhana block of South 24 Parganas district, are more or less staying indoors these days, says Das. They no longer visit the haat , the bi-weekly market that used to come up on Mondays and Fridays next to the bazaar in Bagdanga.  The local administration has allowed the bazaar, where essentials are sold, to operate from 6 a.m. to 9 a.m. every day. Shops selling non-essential items have been shut across the island. Constables from the Frazerganj coastal police station on the neighbouring Frazerganj island, and some civic volunteers have been assisting the administration with implementing the lockdown.

There are enough crops growing in Mousani’s fields, agrees Joydeb Mondal, 32, from Kusumtala village, on the phone. “We are selling snake gourds in our markets at Rs. 7-8 a kilo, which you buy for Rs. 50 a kilo in Kolkata,” he says. Every house on the island produces vegetables, says Mondal, so people rarely buy them, purchasing only the few that they need.

“For example, I have 20 kilos of onion and lots of potatoes. We have more than enough fish in our ponds. The fish rot in the markets for lack of buyers here. A few days from now, we will be growing sunflowers. We will mill the seeds and get the oil too,” says Mondal, a teacher and a farmer who owns three acres of land, on which he grows potato, onion and betel leaf. 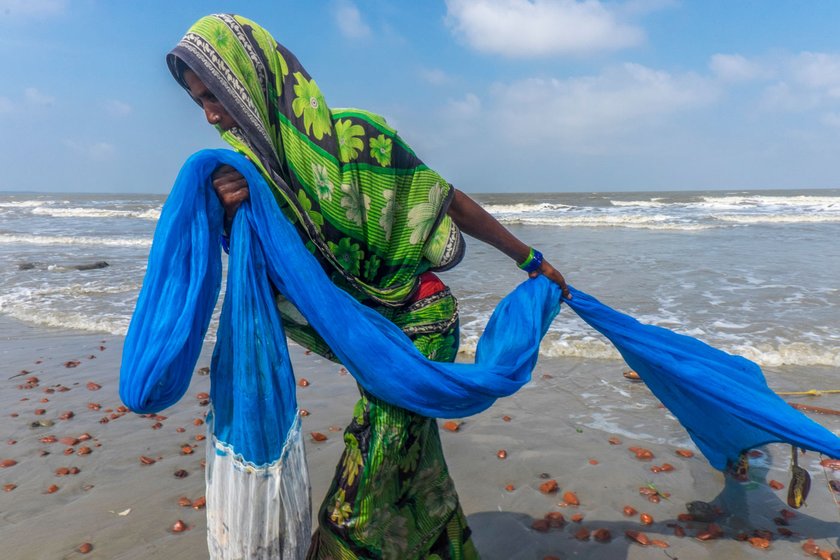 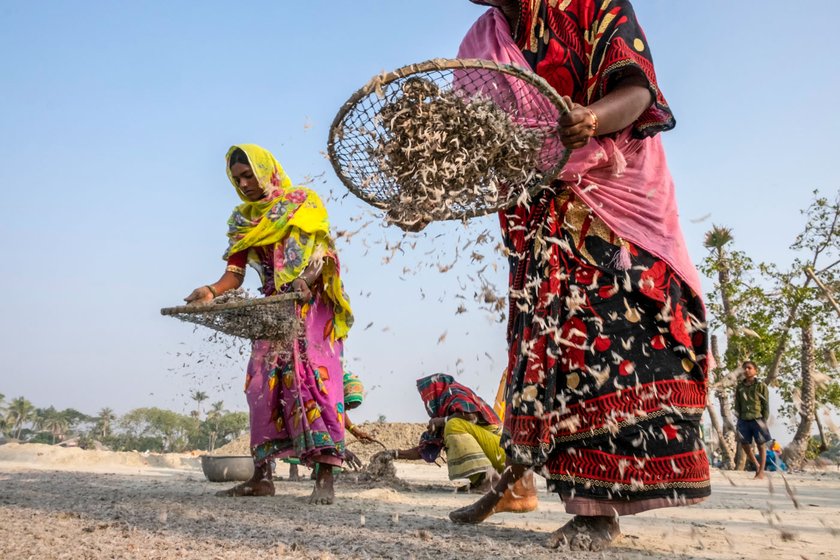 In Baliara village, women cleaning the sand and dirt from the fish swept in with the salty sea waters. The islanders' daily lives are spent outdoors, in the streets, working in the fields or catching fish in the rivers and streams. It is almost impossible for them to stay indoors during the lockdown (file photos).

However, in Kusumtala and Baliara villages, located on the southern coast of Mousani, agriculture has nearly stopped ever since Cyclone Aila stormed the Sundarbans in May 2009. It devastated about 30-35 per cent of the island and increased the soil salinity. The falling yield from the fields has compelled many men to leave their homes to look for work.

The migrants usually go to Gujarat and Kerala and other places in the country to work as labourers, mainly at construction sites. Some of them go abroad, to West Asian countries. “Their earnings have stopped altogether because of the lockdown. What are they going to eat if they lose their jobs tomorrow?” wonders Mondal, who has studied till Class 12 and tutors students of secondary and higher secondary classes in his village.

Some of the migrants have started returning over the last few weeks, from Ahmedabad, Surat, Mumbai, Port Blair and other places, says Mondal. Many of the men from Baliara, who were working at construction sites in the United Arab Emirates, Qatar and Oman, have also come home, as have the young women who were training to be nurses in Bengaluru.

Over time, the rising sea levels in the Sundarbans and salt water flooding the lands has impacted not just agriculture but also housing in the southern villages. In the homes of the poor, 5-10 family members live in a single room. Their daily lives are spent outdoors, in the streets, working in the fields or catching fish in the rivers and streams. Many of them sleep outdoors in the night. It is almost impossible for them to stay indoors during the lockdown. 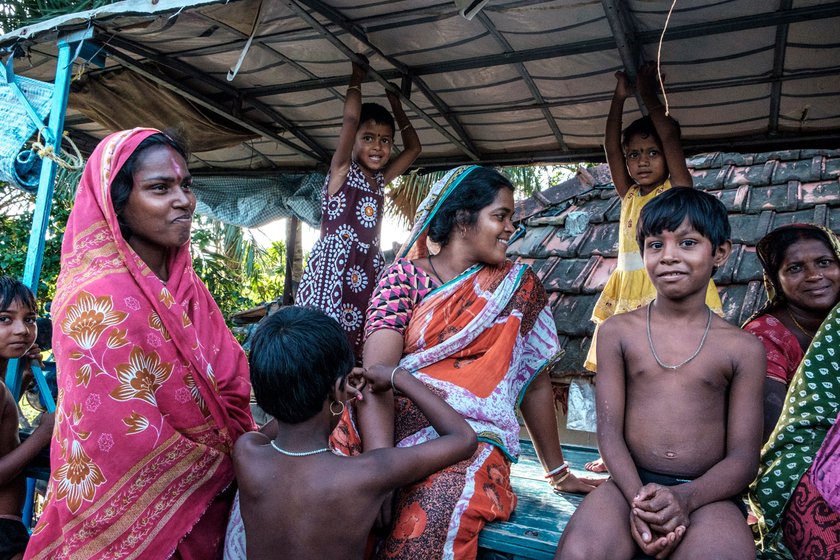 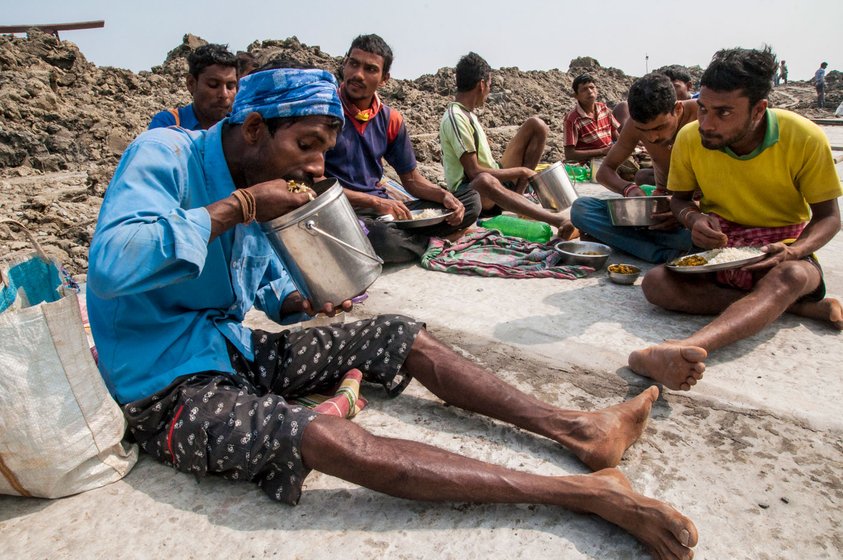 Left: In many houses on Mousani, 5-10 family members live in a single room. But the islanders are aware of the potential risk of the coronavirus, and a 'strict protocol is being followed'. Right: At a local dam site, labourers from Kusumtala village during a lunch break – over time, many have left, looking for work (file photos)

But the islanders are aware of the potential risk of the coronavirus. Das says that a strict protocol is being followed on the island at this time. Local authorities are being informed about the returning migrants, and neighbours are enquiring about them going from door to door. Doctors at the Kakdwip Sub Divisional Hospital have been ordering  mandatory isolation of 14 days, and villagers are keeping vigil to make sure that it is followed. Those who avoided visiting the hospital were forced to go for a check-up, he says.

A young man who returned from Dubai with a fever was sent to the ID & BG Hospital in Beliaghata, Kolkata. His village was relieved after he tested negative for the coronavirus. But the hospital ordered him to remain in isolation at home. A newly married couple who came back from the UAE just a few days ago are at home, in isolation, too. If someone breaks the protocol, the block development officer and the chief medical officer of health are informed by phone immediately.

If the men of Baliara and Kusumtala stop earning altogether, their families will soon run out of food. These households now depend on the ration of rice given by the state government at Rs. 2 per kilo. The government has promised free rice from the public distribution system until September, up to five kilos a month, to tide over the Covid-19 crisis.

Saral Das believes that the residents of Mousani island will overcome the crisis. “We, the people of Sundarbans, are geographically disconnected from the mainland. We have learned this much from the innumerable disasters we have endured – we have to fend for ourselves during a crisis. We usually do not depend on help from the the mainland, which does arrive in due course. Just like I send the two extra snake gourds from my house to my neighbour’s, I know that if my neighbour has two extra cucumbers, they will come to my house. We cope with things together and we shall cope this time too,” he says, with a smile.