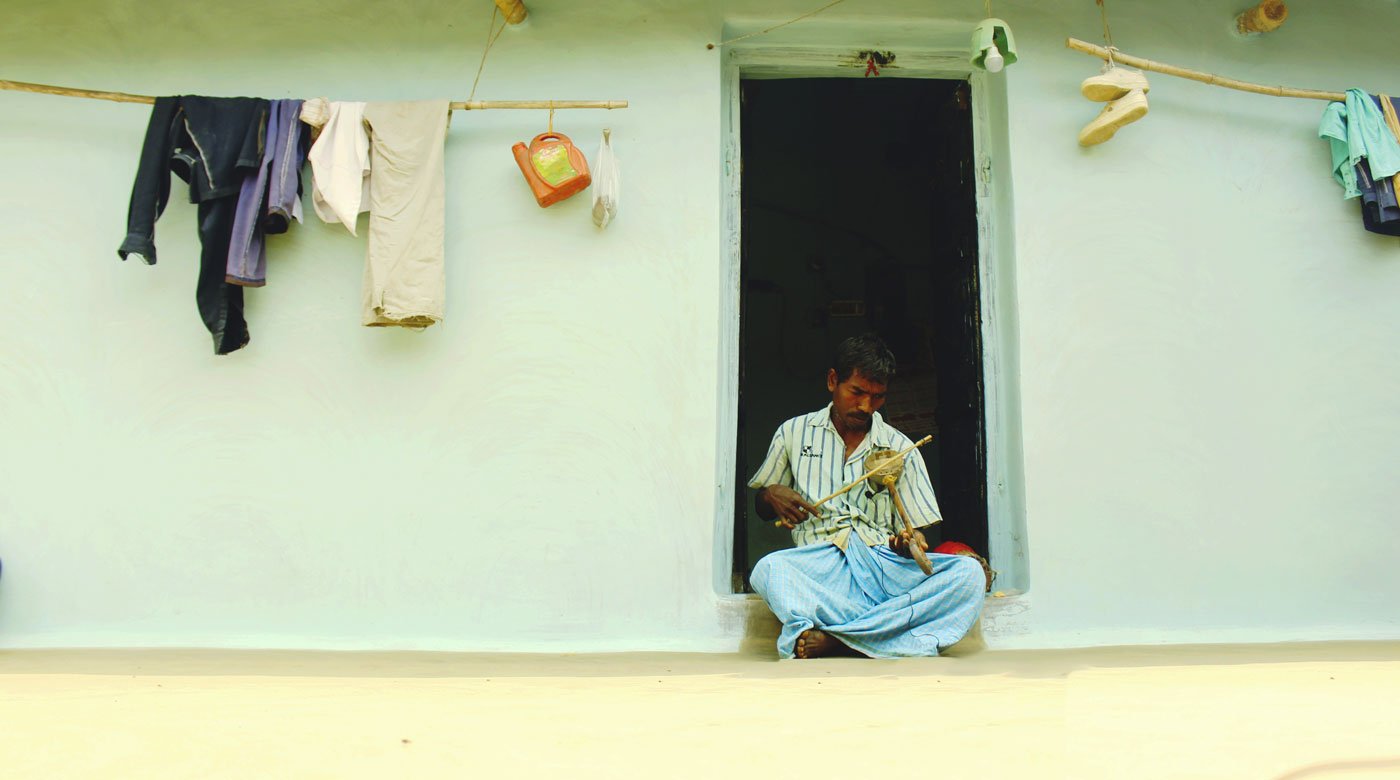 Musical instruments popular with, and rooted in, Adivasi societies are in decline. And the reasons for this in West Bengal’s Birbhum district go beyond the cultural

The music is as earthy as the walls of the houses along the route to the centre of Chhatina. And the streets of this Adivasi hamlet in West Bengal’s Birbhum district once rang to the distinct, sonorous sounds of the banam and the gabgubi , both played by Santal Adivasis.

Now, the tunes and melodies are fading.

“We mostly play these instruments at our parabs [festivals],” says Ganesh Soren, 42, a resident of this mainly Santal hamlet of Gulalgachhi village in Rajnagar block. An agricultural labourer and banam player, he actually created the particular version of the double-string gabgubi that he also plays. The single-string banam is a much older musical instrument of great historic and cultural significance to the Santals and other Adivasi groups too.

For him, the sounds of his creation reflect the Santal struggles for freedom and jal, jangal, jameen (water, forest, land) – issues still alive today

“We have played the banam at the Sidhu-Kanhu festival,” says Hopon Soren, 46, also an agricultural labourer in Chhatina. The festival is named after Sidhu Murmu and Kanhu Murmu – Santal leaders who spearheaded the great hool (revolt) against the British in 1855 . That the British offered Rs. 10,000 for their arrest – a huge sum at the time –speaks to how serious their challenge was. The rebellion was drowned in blood, with at least 15,000 of the 60,000 bow and arrow wielding Santals slaughtered by British guns. The banam invokes their memory at the festival in their honour.

“In our childhood,” says Hopon Soren, “there were famous banam players who we heard on radio. We learnt to create and play the instrument by observing them and following the sounds and melodies they made.”

Ganesh Soren’s gabgubi also harks back to history. For him, the sounds of his creation reflect the Santal struggles for freedom and jal, jangal, jameen (water, forest, land) – issues still alive today. Both Ganesh and Hopon work in the fields of the local mahajan (landowning moneylender). Though the official daily wage rate in the region is Rs. 240, and remains so on paper, they have for months been getting only around Rs. 100-200 a day. They can get up to Rs. 260 on the rare days they find work as masons. The MGNREGA rate for West Bengal is Rs. 240, for which, in practice, they get Rs. 182-202, and they find, at best, only 25 days of such employment in a year. 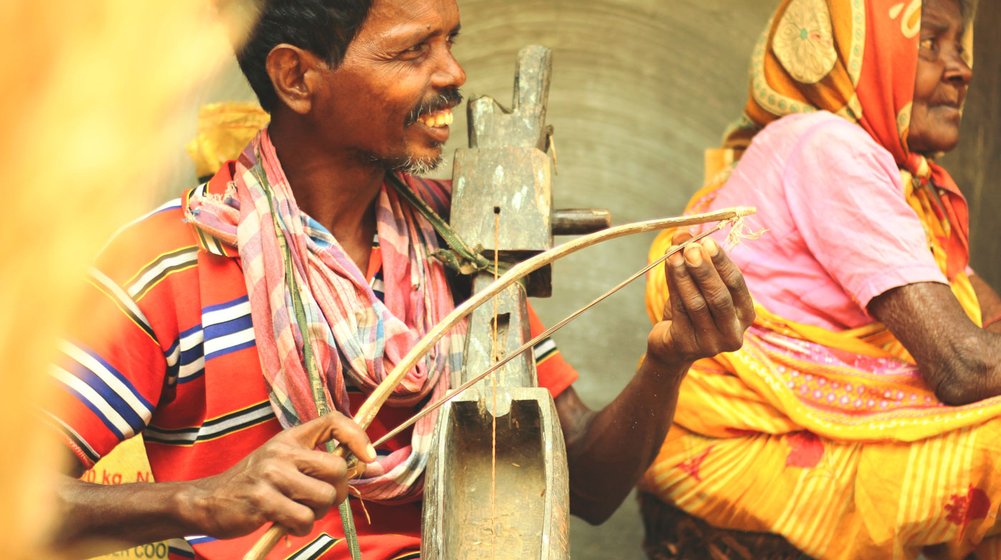 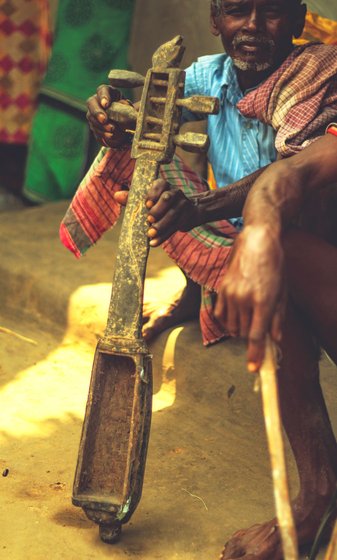 The (non-MGNREGA) wage rate within the region, locals tell me, used to be higher but has declined over the years. It was set at Rs. 240 around or just after 2011. And the already falling rate took a huge blow with the pandemic and the accompanying lockdown. However, with a good monsoon and the present agricultural season underway, they could be getting Rs. 240 daily again – for some days or weeks.

Every single banam and gabgubi is custom-made and reflects the individual creativity of the artist. So the look and structure varies with the character of the person who creates and plays it. The banam of Hopon Soren is intricately carved out of wood with tools like a basley (something like an adze, or an axe with arched blade) and ruka (chisel).

The banam of Ganesh Soren has a whimsical beauty and is built of random components drawn from coconut shells, animal hide – and even an umbrella stick.

According to tribal musicologist Dr. Nibedita Lahiri of the Rabindra Bharati University, Kolkata, “The banam is a single string instrument which probably belongs to the violin family, that can be played with a bow, and which has a percussive sound. It’s a chordophone which cannot be played directly with the hands like a plucked instrument. It can only be played with a chhaar [bow] made with strings or with the hair of certain animals. You can find many types of banam across Bengal – including fantor banam, bele banam and more – as their makers create them in their own, unique style.” 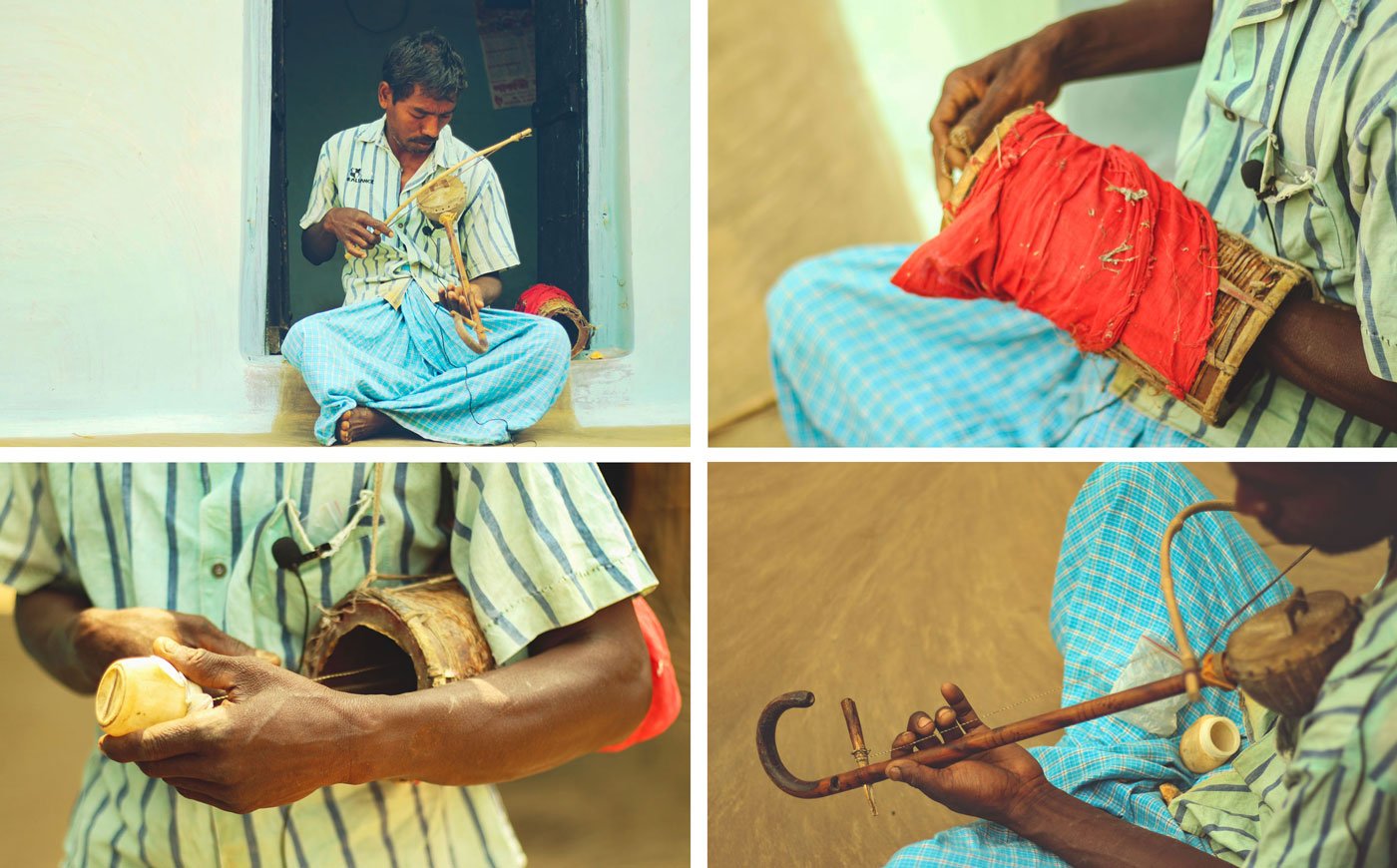 Top left: Ganesh Soren at his doorstep with his whimsical fantor banam . Top right, bottom left: Ganesh's signature gabgubi, with his son’s dhol as the main part, along with an old Pond’s container. Bottom right: His banam , made with coconut shell covered with hide, fastened to an umbrella handle with nuts and bolts

Ganesh Soren’s gabgubi is a tribal variant and ancestor of khomok , a popular instrument of Bengali folk music. He used a dhol (drum) and, oddly enough, one of his son’s toys to make it. Its tune, he says, reminds him of the cheerful innocent giggles of his son and the beat reminds him of the jungle. “I have been playing both instruments for 15 years now, in order to keep my mind fresh” he says. “There was a time when I would play them all evening after a day full of hardship and people would come to listen. But today they have so many options and no one wants to listen to this old fellow.”

Many men from their village work as masons, or daily wage labourers in various towns, and some of them still carry the banam along with them. But not many care to learn this musical tradition any longer, say Ganesh and Hopon. “There are very few people left in the village and community,” says Hopon, “with the knowledge and craftsmanship to create this unique sound.”

“There must be some eager students in our local school, in order to be able to teach there,” says Ganesh. But, he says, the generation is ruled by streamed music and mobile apps, all at the click of a button. How could they be made interested in the banam ?

Neither Ganesh nor Hopon owns or can afford a cellphone.

Both Ganesh and Hopon also link the decline of their beloved banam to their own economic situation. They are poor agricultural labourers working more hours for less money. “If I want to play banam ,” says Ganesh, “my entire family would remain hungry for days.”

Sayani Chakraborty is currently pursuing master’s in journalism and mass-communication from Visva-Bharati University. She is interested in documenting India's tribal culture and heritage.

Other stories by Sayani Chakraborty