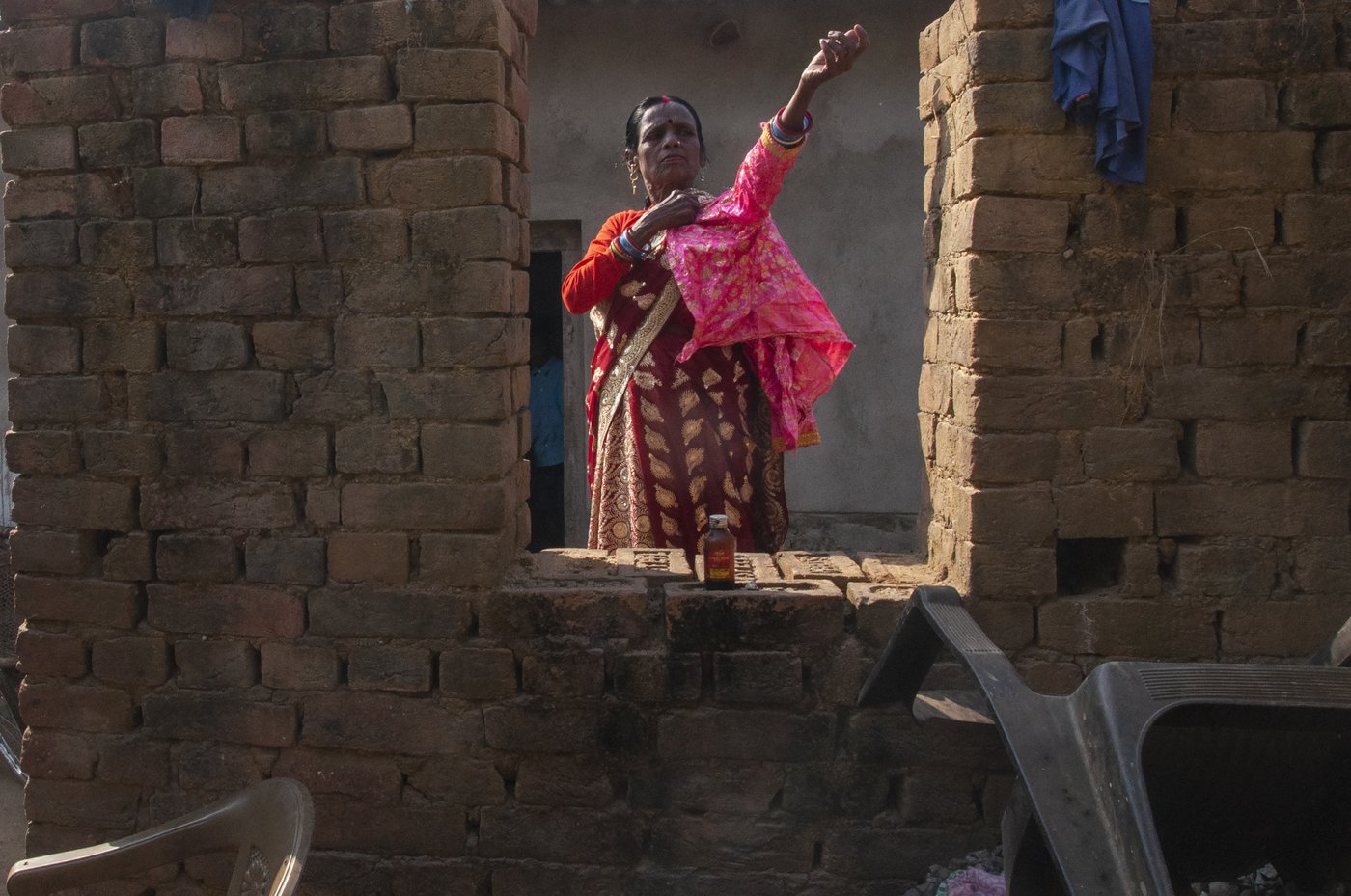 In Senabana village of West Bengal's Purulia district, 65-year-old Charubala Kalindi, who has danced as a nachni for decades, still whips up a high-energy performance along with her rasik and their troupe

The colourful napkin in Charubala Kalindi’s hand glimmers like lightning for a moment. The red and blue ghaghra swings vigorously to the Jhumur song. The musicians gathered for the performance begin to play in unison.

An audience of 80-90 people – old and young, men, women and children – is watching the performance in Senabana village in Arsha taluka of West Bengal. Though 65 years old, Charubala dances briskly.

It is said that the word ‘ jhumur ’ came from the sounds made by the anklets worn by the dancers. The dance form is popular mainly in the south-west parts of West Bengal and adjacent regions of Jharkhand (while another variant is performed in Assam). Most of the poets who have traditionally composed Jhumur songs are from the oppressed castes, and some of their songs speak of social issues, and of drought, flood, politics and other ills. The love and longing between Krishna and Radha is also a recurring subject of Jhumur songs.

Charubala's own life reflects some of these themes. She once lived in Belma village in Purulia II taluka of West Bengal's Purulia district (Puruliya in the Census). When she was around 16-17, her father Mohan Kalindi – the family belongs to the Kalindi community, listed as a Scheduled Caste in some states – an agricultural labourer and construction site worker, got her married to Shankar Kalindi of nearby Dumdumi village.

Shankar was in his 20s, and he too did whatever labour was available. He turned out to be physically abusive. The beatings got so severe that Charubala left him and returned to her father. But Mohan turned her away, saying he was too poor to take care of her. So Charubala became homeless and lived on the streets for a while. 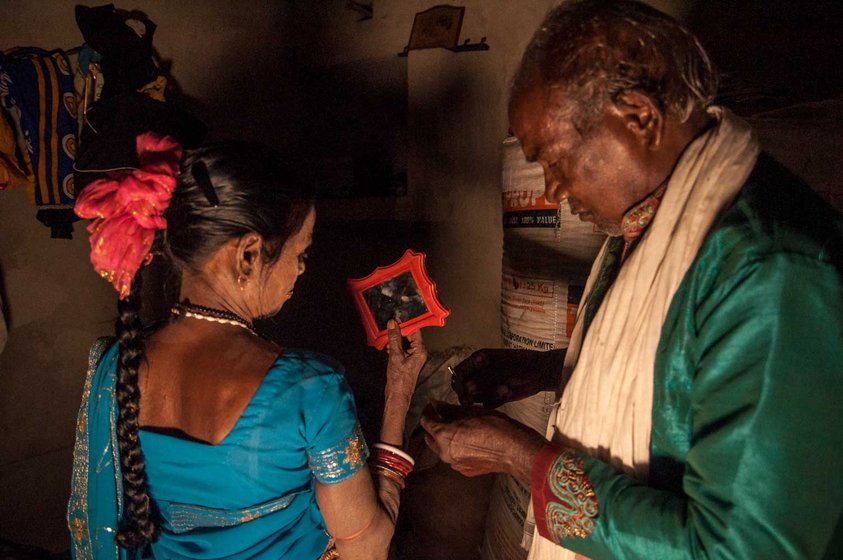 Shravan helping Charubala dress up before a performance

This is where she met Shravan Kalindi (neither of them remembers the year). Shravan, a Jhumur artist, took her in. He trained Charubala to be a nachni , with help from Bimala Sardar, another nachni who lives in a neighbouring village. Over time, Shravan, now 75, became Charubala’s rasik – her manager, agent and coordinator of her performances. He also collaborates with groups associated with Baul, Bhadu, Chau, Karam Kirtan, Tusu, Kirtan and other performing arts. And he is an occasional agricultural labourer.

A rasik is regarded as a connoisseur of poetry and music. The nachni and he are usually in a conjugal relationship, which can often be exploitative of the woman. Just like other rasiks , Shravan too is married, and his large family includes his wife Sarala, sons, daughters, daughters-in-law and grandchildren. Charubala and he have a daughter too, 24-year-old Kamala, who is married and has moved to Uttar Pradesh.

The pressure to earn for the large family keeps Charubala performing even at her age. This, however, has not earned her the respect of Shravan’s wife, Sarala, who still refuses to accept her.

Charubala earns Rs. 1,000 per show organised by the state government; these shows are around 1 to 1.5 hours long, and Charubala, manages, at her age, to do just one or two shows a month.  She also gets Rs. 1000 a month as a stipend for folk artistes from the state’s Department of Cultural Affairs.

During the Juhmur season, from around October to May, private shows, organised by clubs or puja committees, can go on for the whole night, during which a nachni has to sing and dance for at least five hours. For this, the troupe of five to seven people is paid Rs. 6,000- Rs. 8,000, which is divided among them. The supporting musicians play the dhol (a double-sided drum), a madal (a small double-sided drum made from a hollowed tree trunk), a dhamsa (a large kettle drum), a maracas (a hollow gourd or gourd-shaped container filled with dried beans) and the shehnai .

Charubala has accepted this work as her destiny. “What more can be done? If the almighty had written it as my fate to be a nachni , who am I to change that? What will I eat if I leave this profession?” she says with a wry smile. 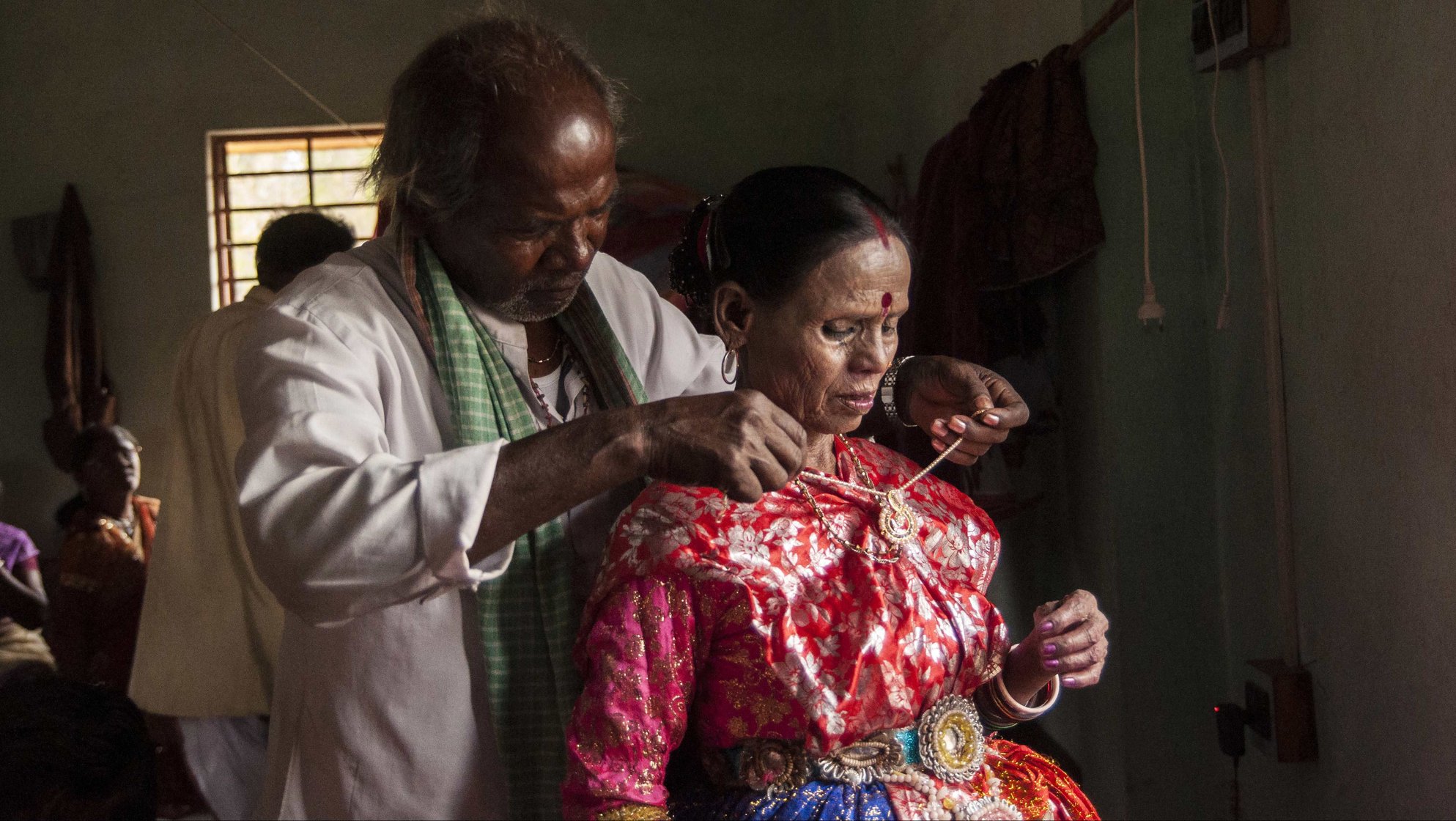 Shravan, 75, is Charubala's manager, agent and the coordinator of her performances. He is also a rasik , regarded as a connoisseur of poetry and music. A nachni and a rasik are usually in a conjugal relationship 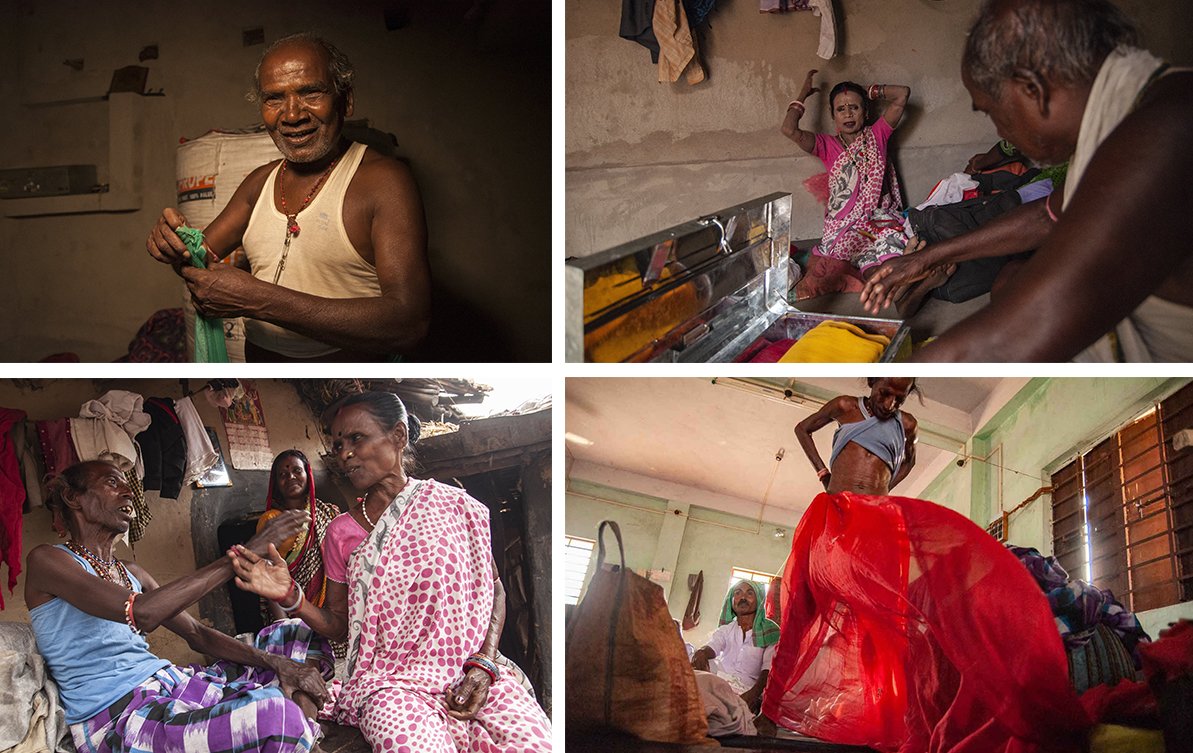 Top row: Shravan Kalindi and Charubala preparing to start the show. Bottom left: C harubala chatting with her group's long-time dholak player and neighbour Chepu Kalindi, who is around 60, and his wife Padma, at their home in Senabana. When it isn’t Jhumur season, Chepu is an agricultural and construction labourer. Bottom right: Chepu donning his outfit before a performance at Surulia village; he is fashionable within his financial constraints, and plays for other local troupes too 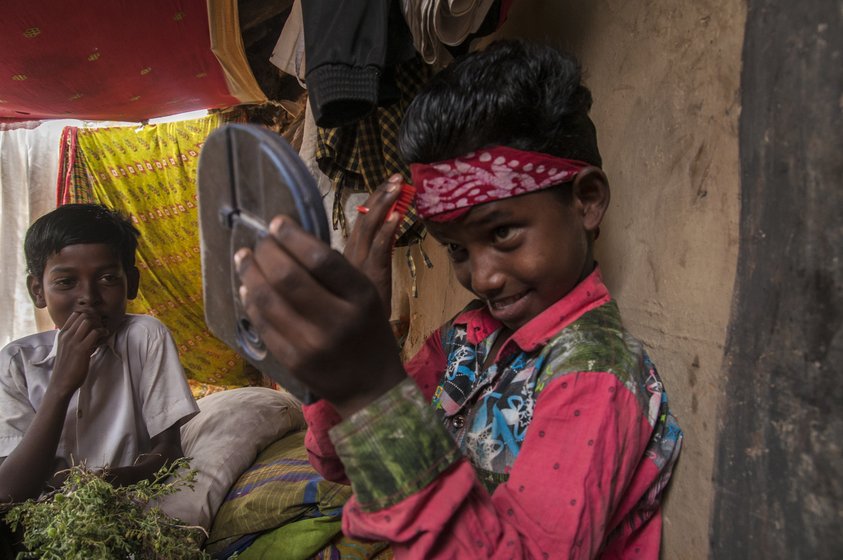 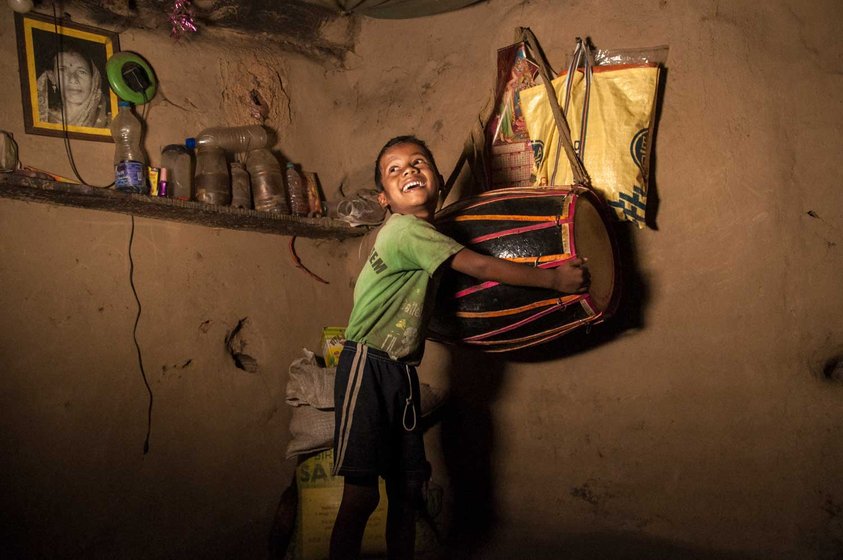 Left: Charubala's 12-year-old grandson Maheswar Kalindi playfully dresses up too for the show, though children don't perform in Jhumur programmes. Right: But many children in families that work in Jhumur do learn music from an early age. Here, troupe member Shantiram’s son Mangal plays with the dholak at Khadu Kalindi’s home. Khadu is a member of Charubala's troupe and also her neighbour 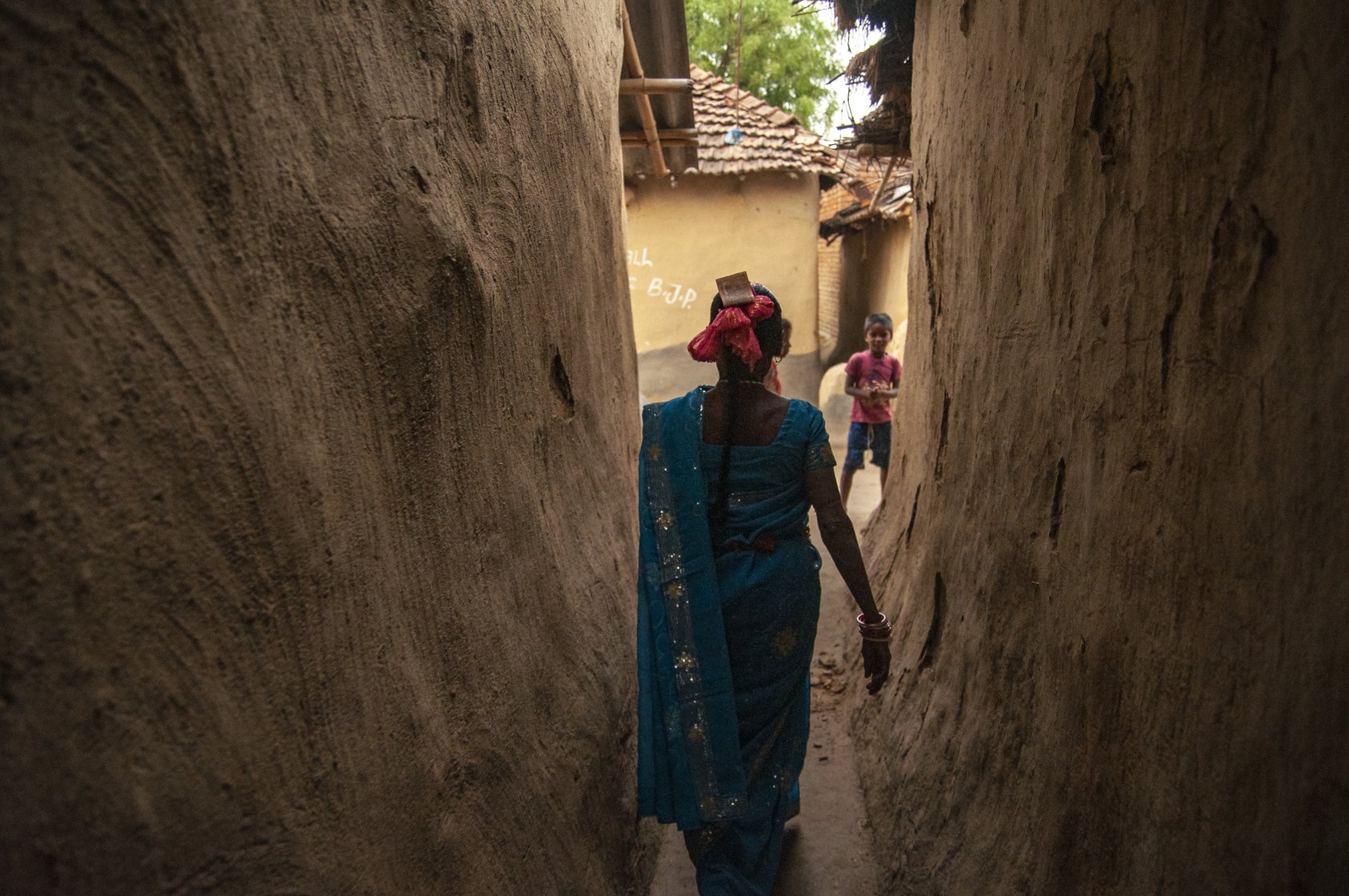 Dressing up done, it's show time: Charubala walks to the open space – called baishal or nachnishal or an akhara – for her performance at Senabana village 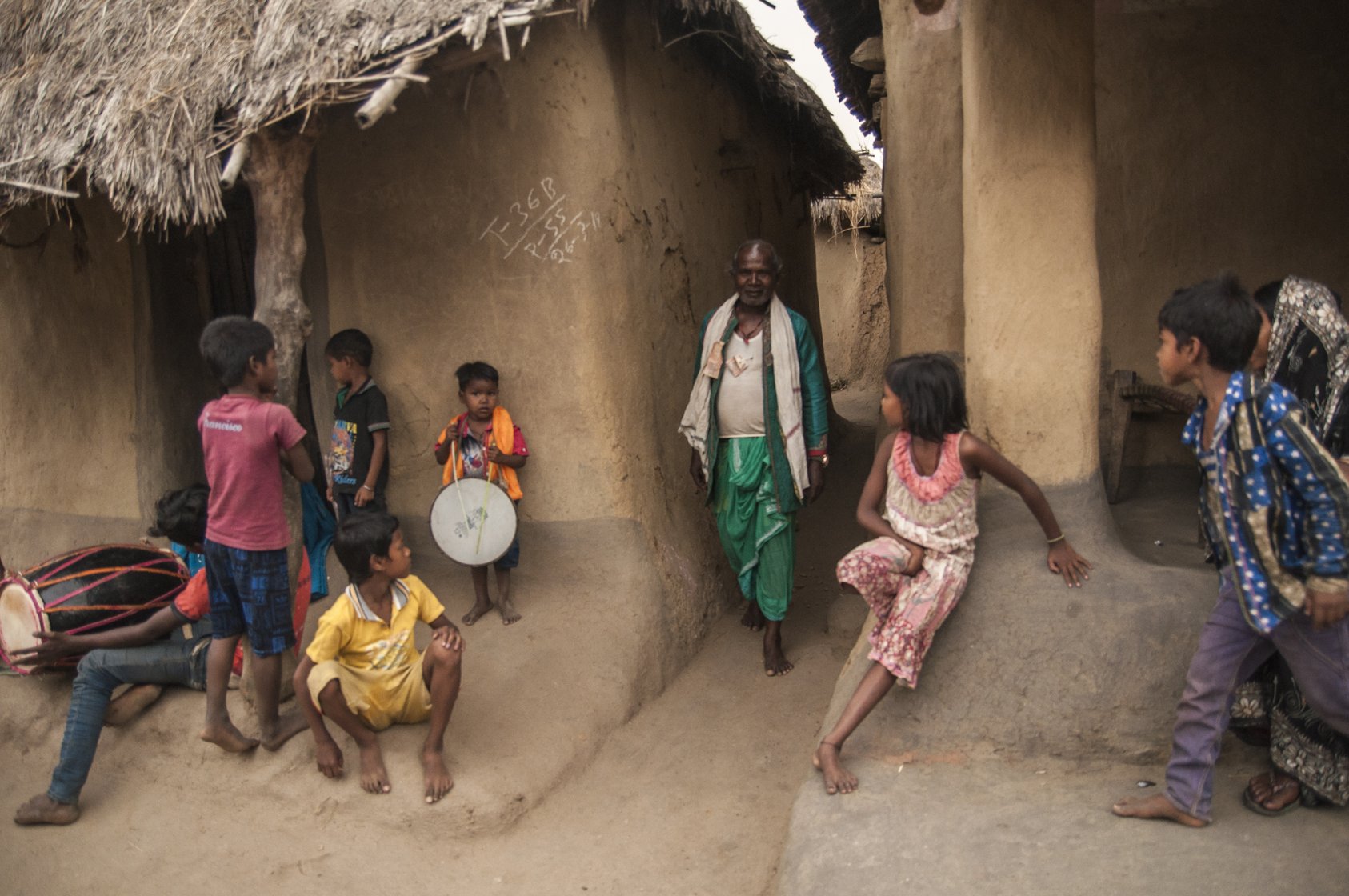 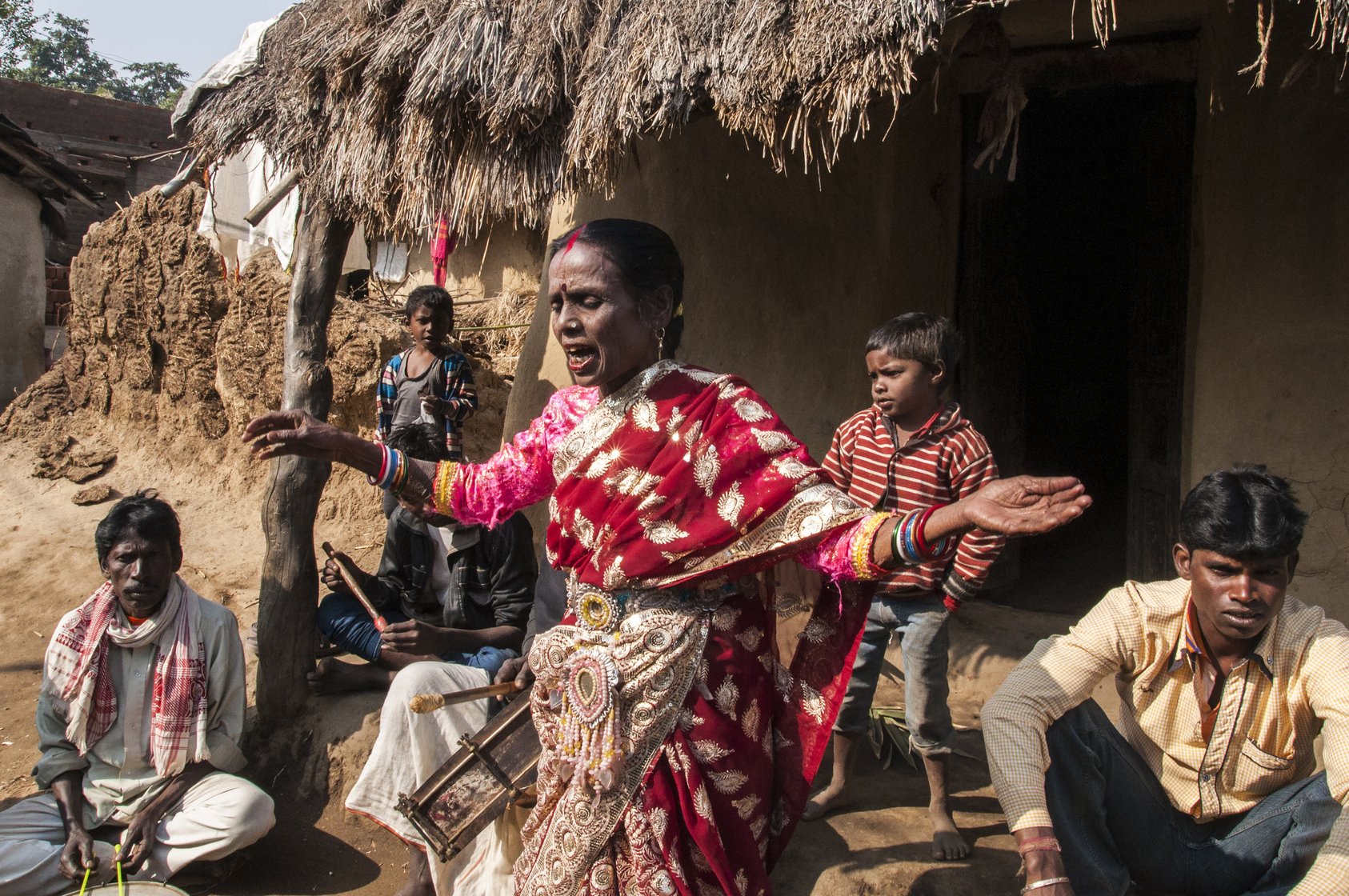 Charubala offers a ritualistic prayer to the gods and gurus, before commencing the performance. With her are (left to right) Bhajan Kalindi, Khadu Kalindi (partially visible) and Charan Mahato. Bhajan and Charan are not regulars in this troupe, they come and go 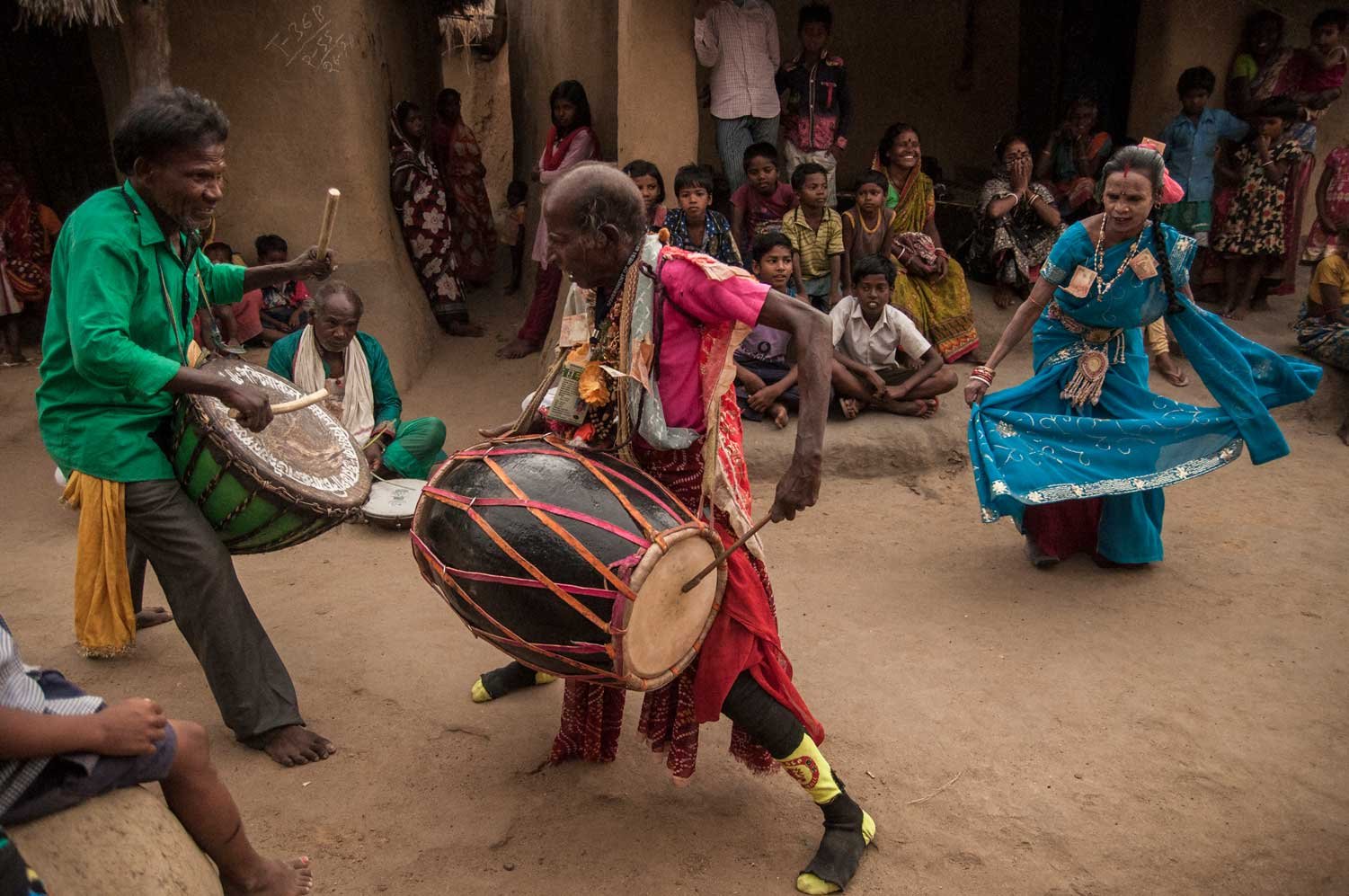 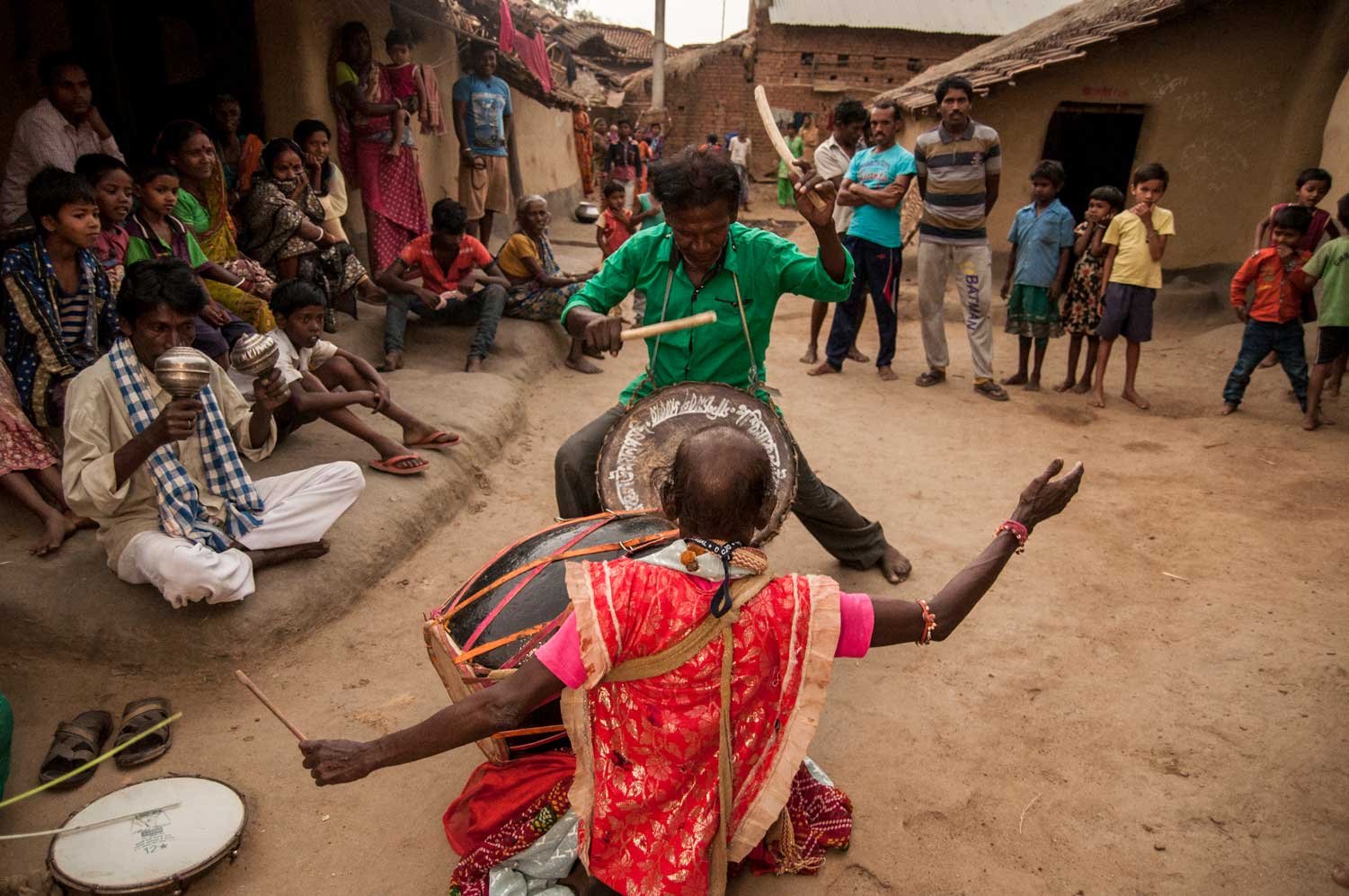 Chepu and Amrito getting into the swing of the performance. During Jhumur season, each of the musicians earns Rs 300-400 per show, while Charubala and Shravan each make Rs. 1,000 to Rs 1,500 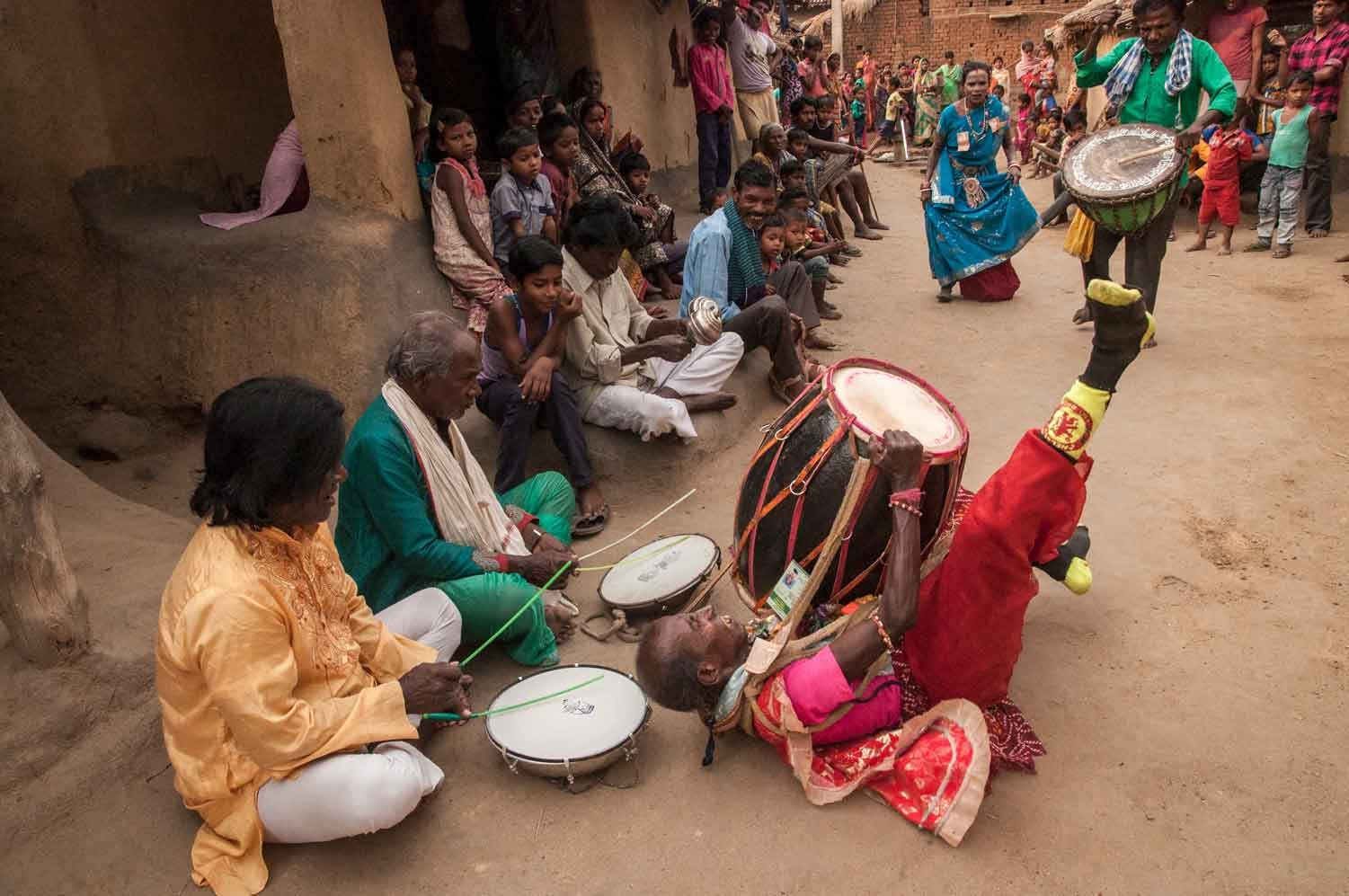 A high-energy Chepu Kalindi, aged round 60, gets carried away in the rhythm of the performance 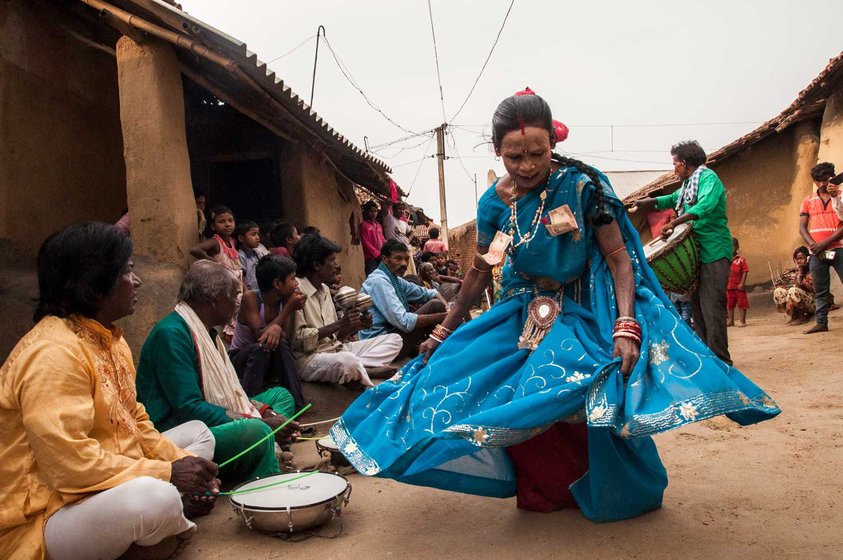 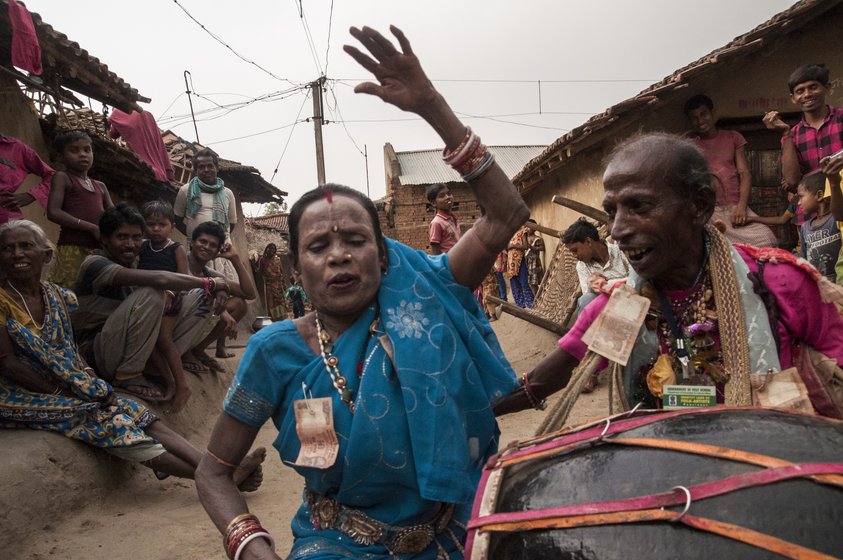 Left: Charubala Kalindi dancing with currency notes – Rs. 10, sometimes even Rs. 100 – pinned to her saree by audience members. A typical nachni performance touches upon the themes of love, devotion, longing caused by separation, and desire. The performance starts with an introduction and then moves into devotional renditions. Slowly, as the music progresses, the rhythms become more vigorous, and the dances more sensual. Right: The love between Krishna and Radha is one of the central subjects of Jhumur songs. The rasik usually plays the role of Krishna while Radha is portrayed by the nachni . Here, Chepu is playing Krishna’s role 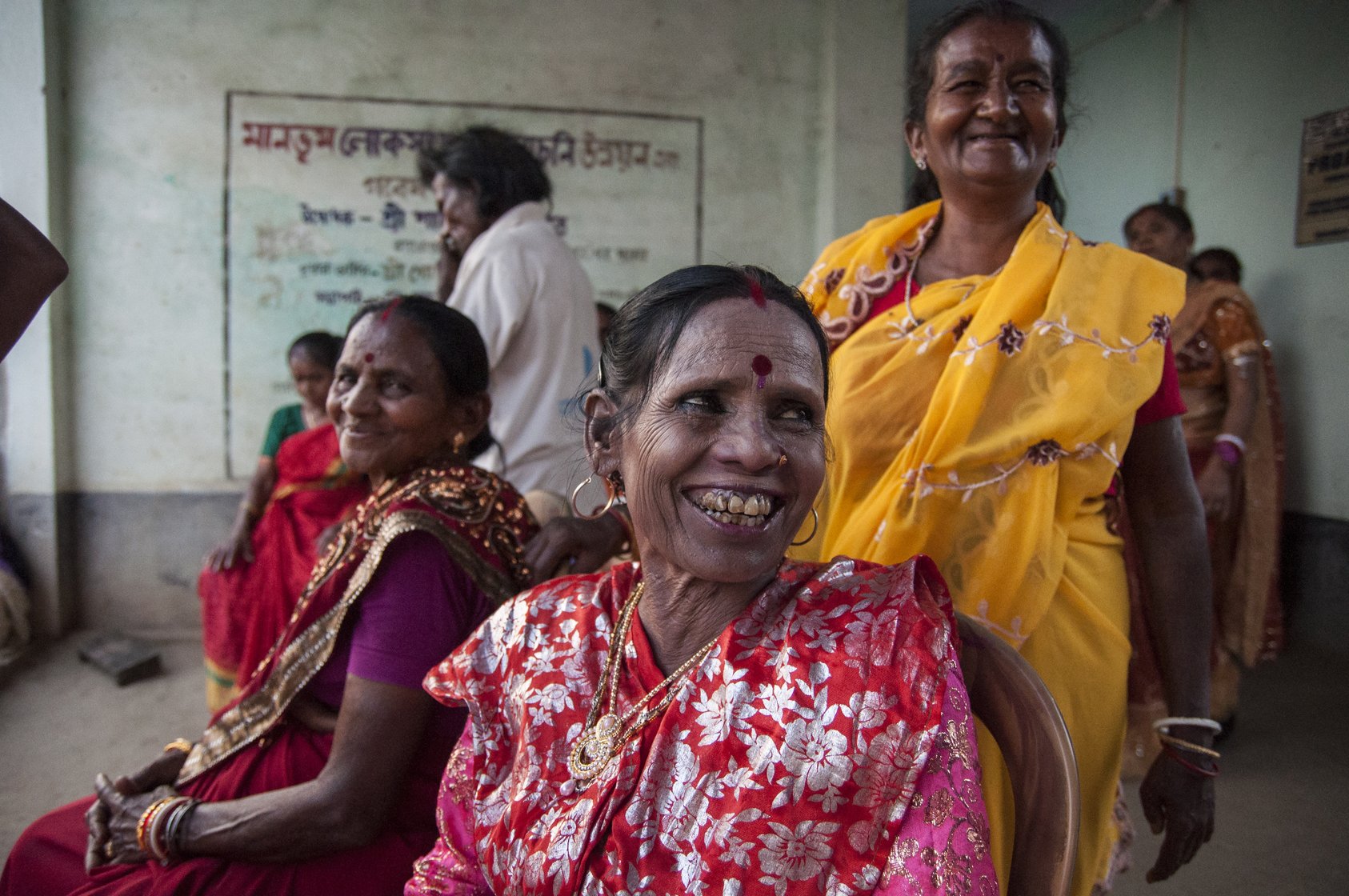 At a community meeting, nachnis along with rasiks and musicians gather to discuss various grievances and problems. They all meet as part of the Manbhum Lok Sanskriti O Nachni Unnayan Samity. This organisation is a unit of the Kolkata-based Durbar Mahila Samanwaya Committee, a collective of female male and transgender sex workers. The Samity, its secretary says, comprises 55 nachnis and rasiks , and around 4,500 musicians. The NGO runs a school in Senabana, where the children of people associated with Jhumur study. Charubala is a volunteer at the school, where her work includes helping raise funds and cooking mid-day meals for the kids 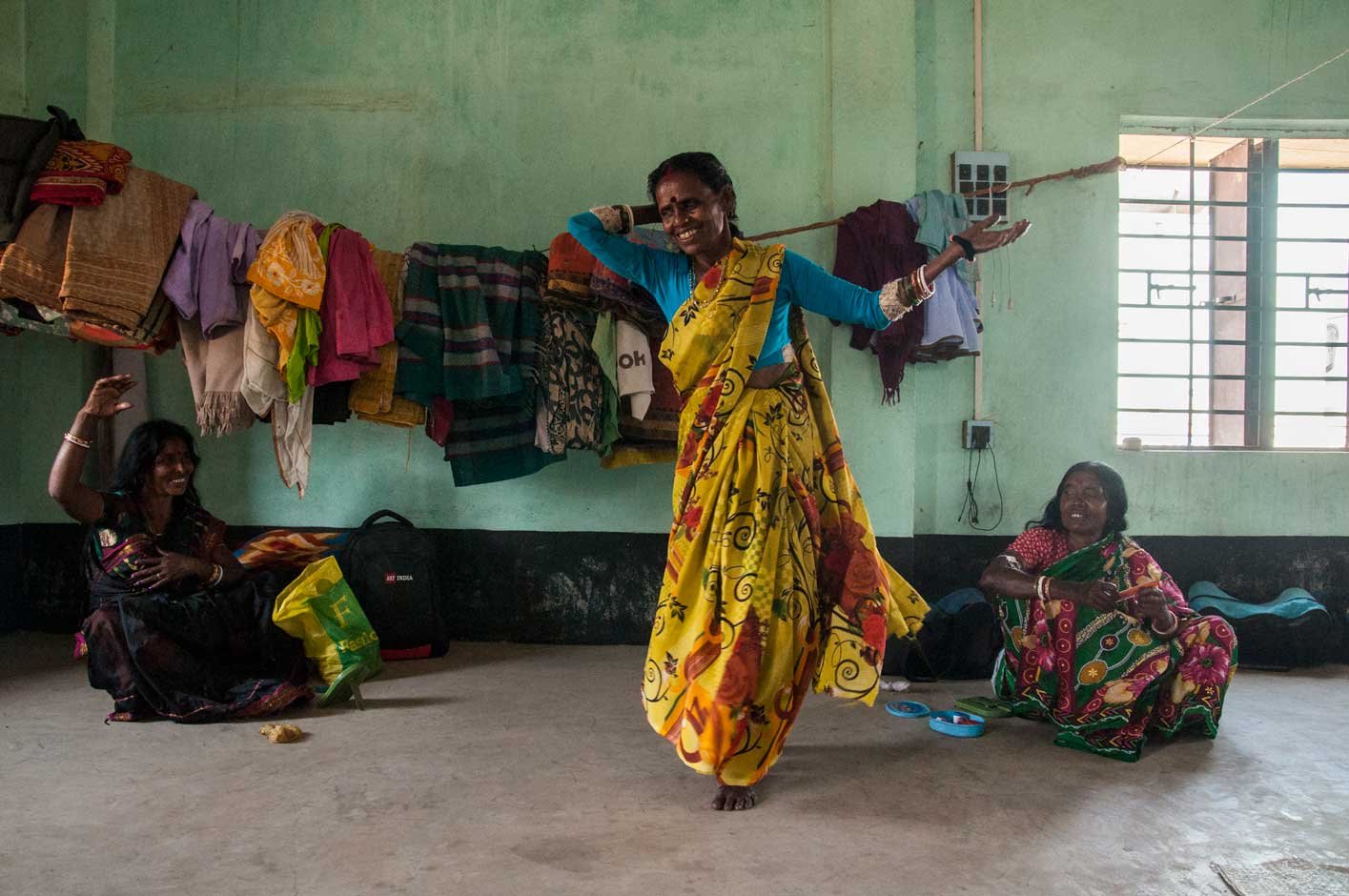 Left: Charubala Kalindi dances as fellow nachnis Arati Mahato and Monjura Hajra, who live in neighbouring villages, look on. It is a moment of quiet camaraderie, away from the audience and applause

A different version of this photo story was published on Sahapedia on October 25, 2018.