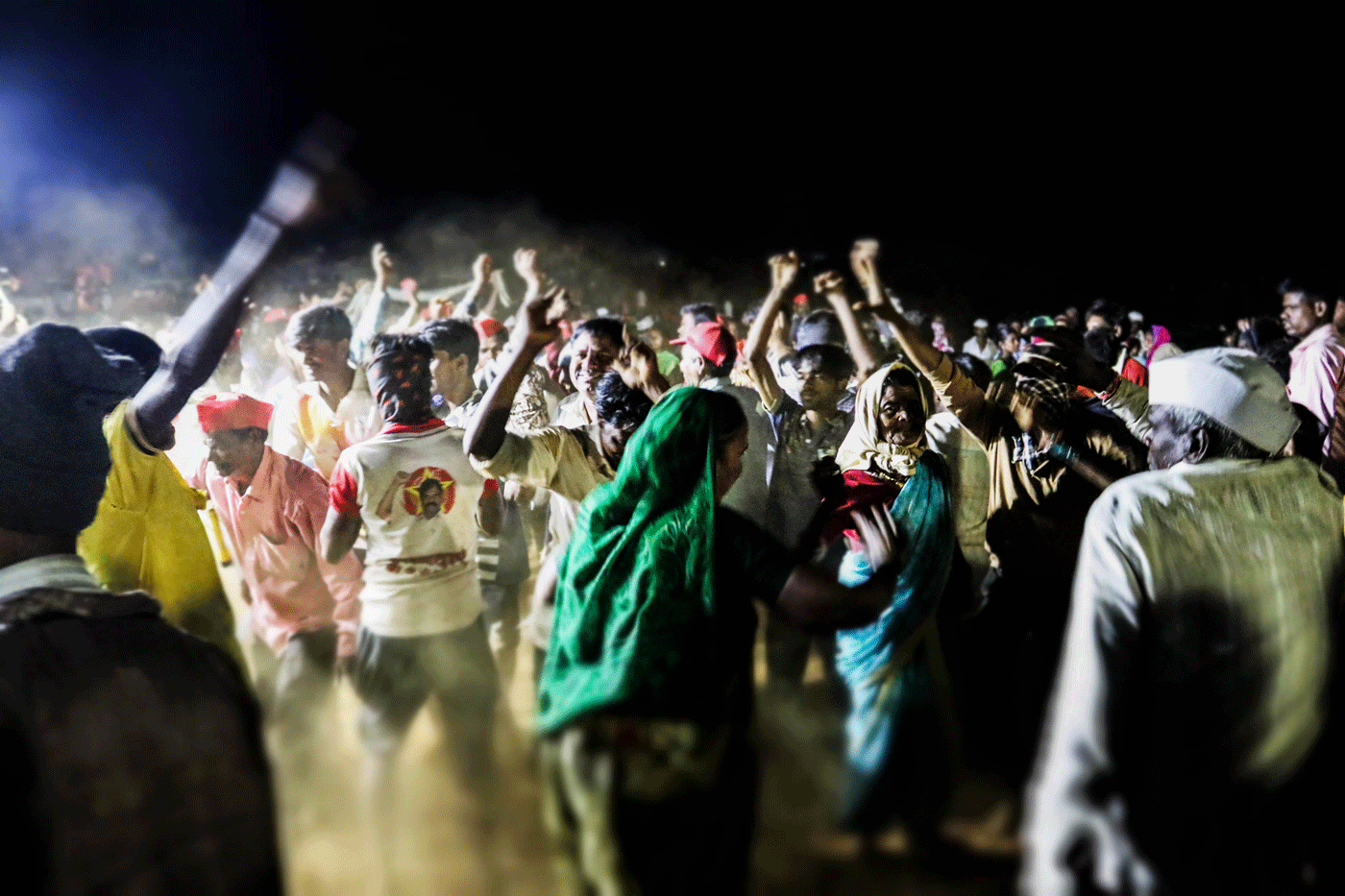 At the farmers' rally on February 20-21 in Nashik, many came with their traditional musical instruments, adding rhythm and lyrics to the protest gathering

Watch video: The music of the march

“In summers I am a Vasudeo and in winters I am a farmer,” said Biva Mahadev Gale, around 70 years old. Vasudeo is a community of worshippers of Lord Krishna, who walk door to door and sing folk devotional songs to collect alms.

Biva had come from Raitale village of Peint taluka in Nashik district for the farmers rally in Nashik city on February 20-21. As a Vasudeo – his family’s traditional occupation – he walks across several villages of Peint taluka . And he works as a farmer from September to February in his village.

Many farmers had brought their traditional musical instruments to the rally last week. The protest, which began on February 20, was called off on the night of February 21 after the government agreed to meet the demands of the farmers and gave a written commitment. 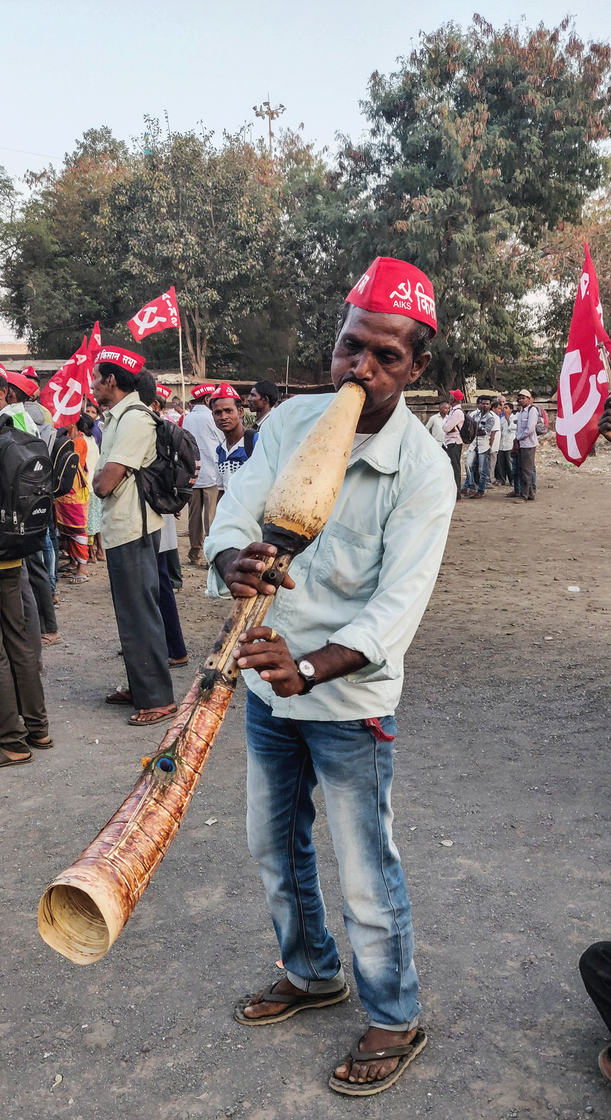 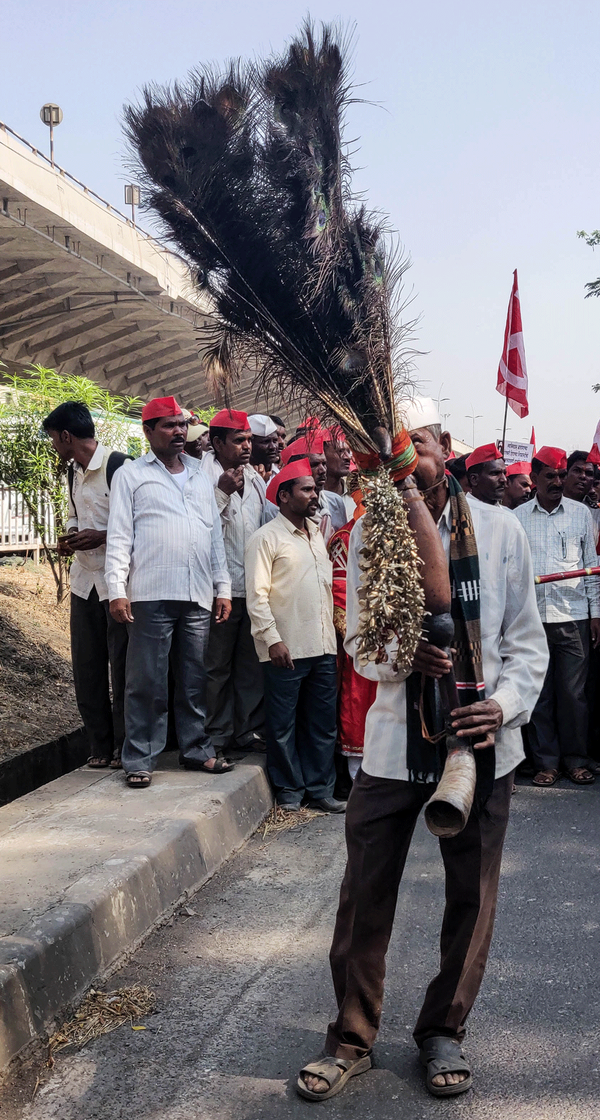 Left: On the first day of the March (February 20, 2019) Sonya Malkari, 50, a Warli Adivasi, was playing the traditional tarpa. Sonya had come from Sakhare village in Vikramgad taluka of Palghar district in Maharashtra, and was performing at the Mahamarg bus station in Nashik, where thousands of farmers from several districts of Maharashtra had halted. Right: Vasant Sahare, 55, is from Wangan Sule village in Surgana taluka of Nashik district in Maharashtra. He was playing the pavri . Vasant belongs to the Kokna community, a Scheduled Tribe, and farms on two acres of forest department land 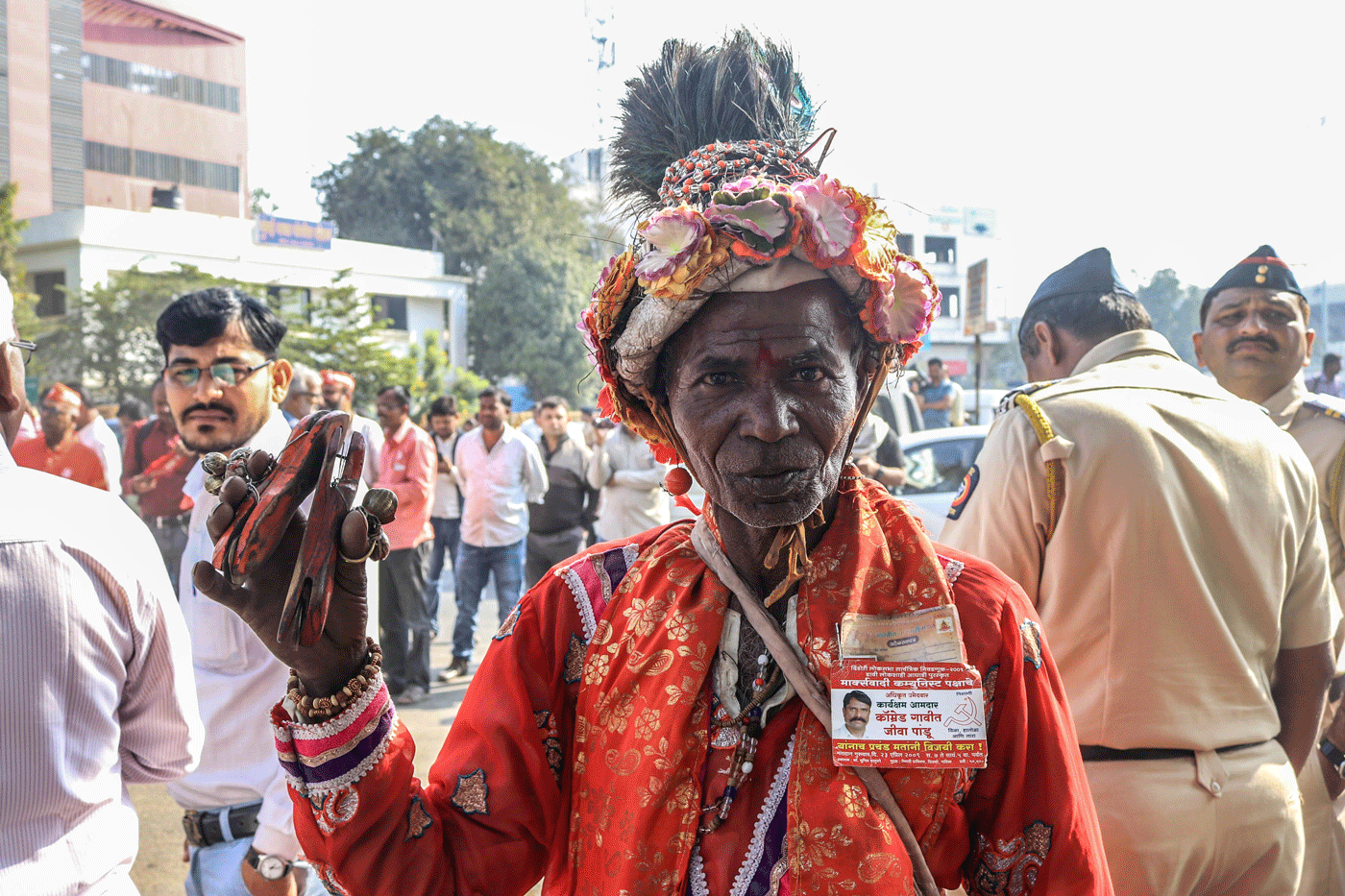 Biva Gale playing a chipli while singing devotional folk songs.  He is from a community of worshippers of Lord Krishna, who walk door to door and sing folk devotional songs to collect alms, and had come from Raitale village of Peint taluka in Nashik district 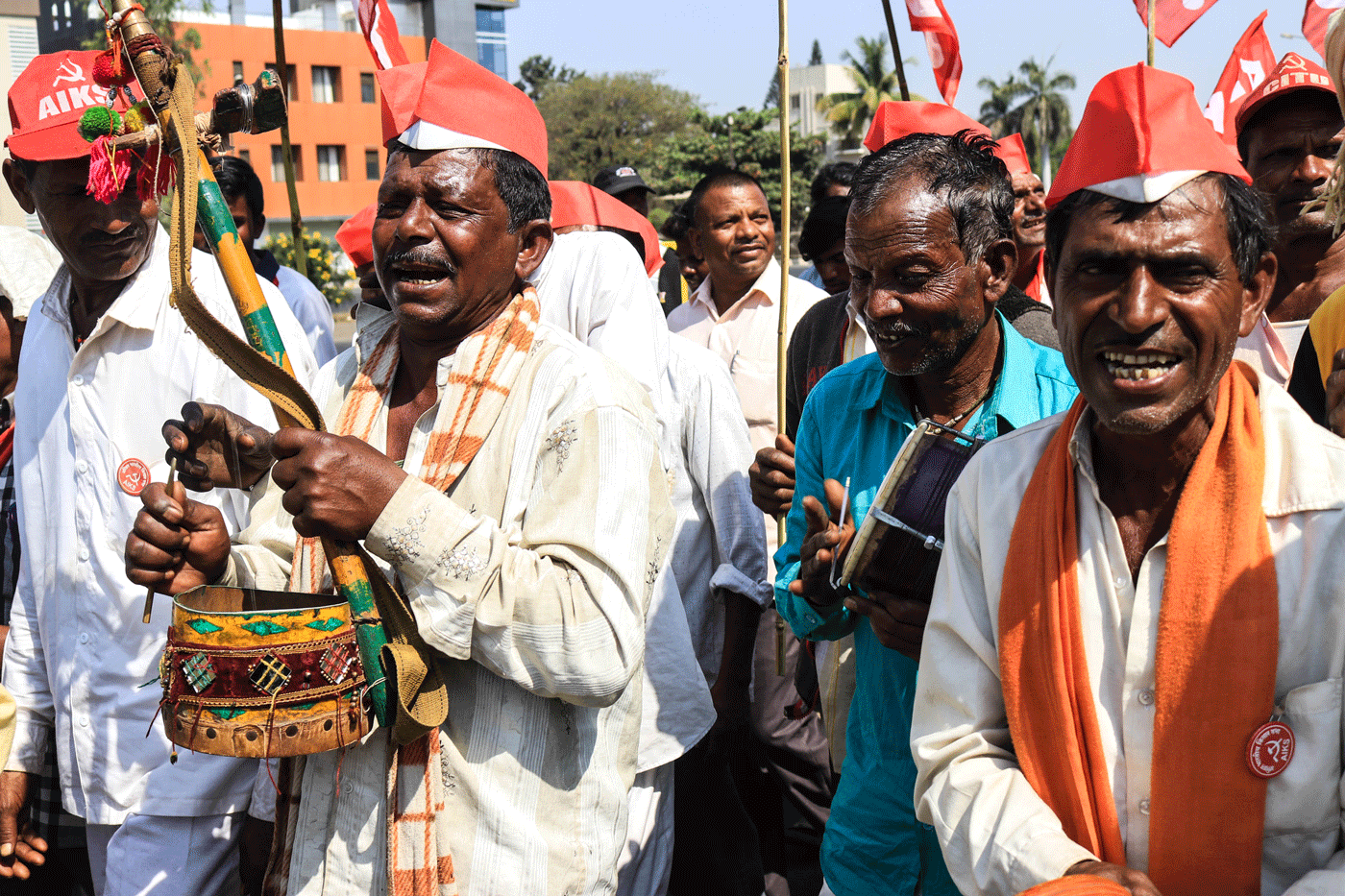 Gulab Gavit (left), 49, was playing the tuntuna (a single-stringed instrument). He is from Phopshi village in Dindori taluka of Nashik district in Maharashtra. Bhausaheb Chavan (right, wearing a red cap) , 50, also from Phopshi village, was playing the khanjari (a percussion instrument). Both Gavit and Chavan, along with other farmers from Dindori taluka , were singing songs in praise of the farmers’ protest 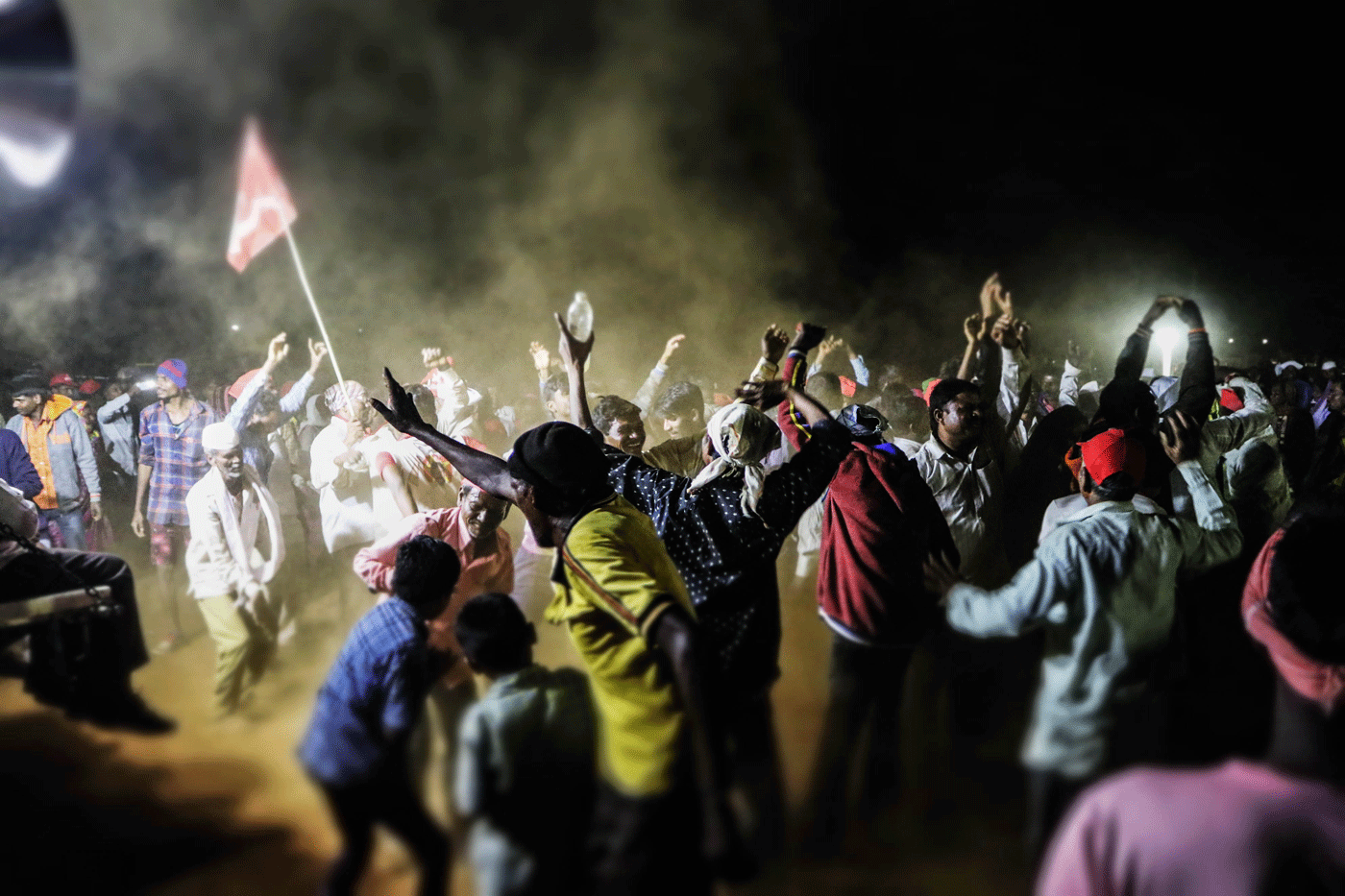 Songs and solidarity dances on the night of February 21, while awaiting the outcome of the meeting between representatives of the government of Maharashtra and All India Kisan Sabha leaders