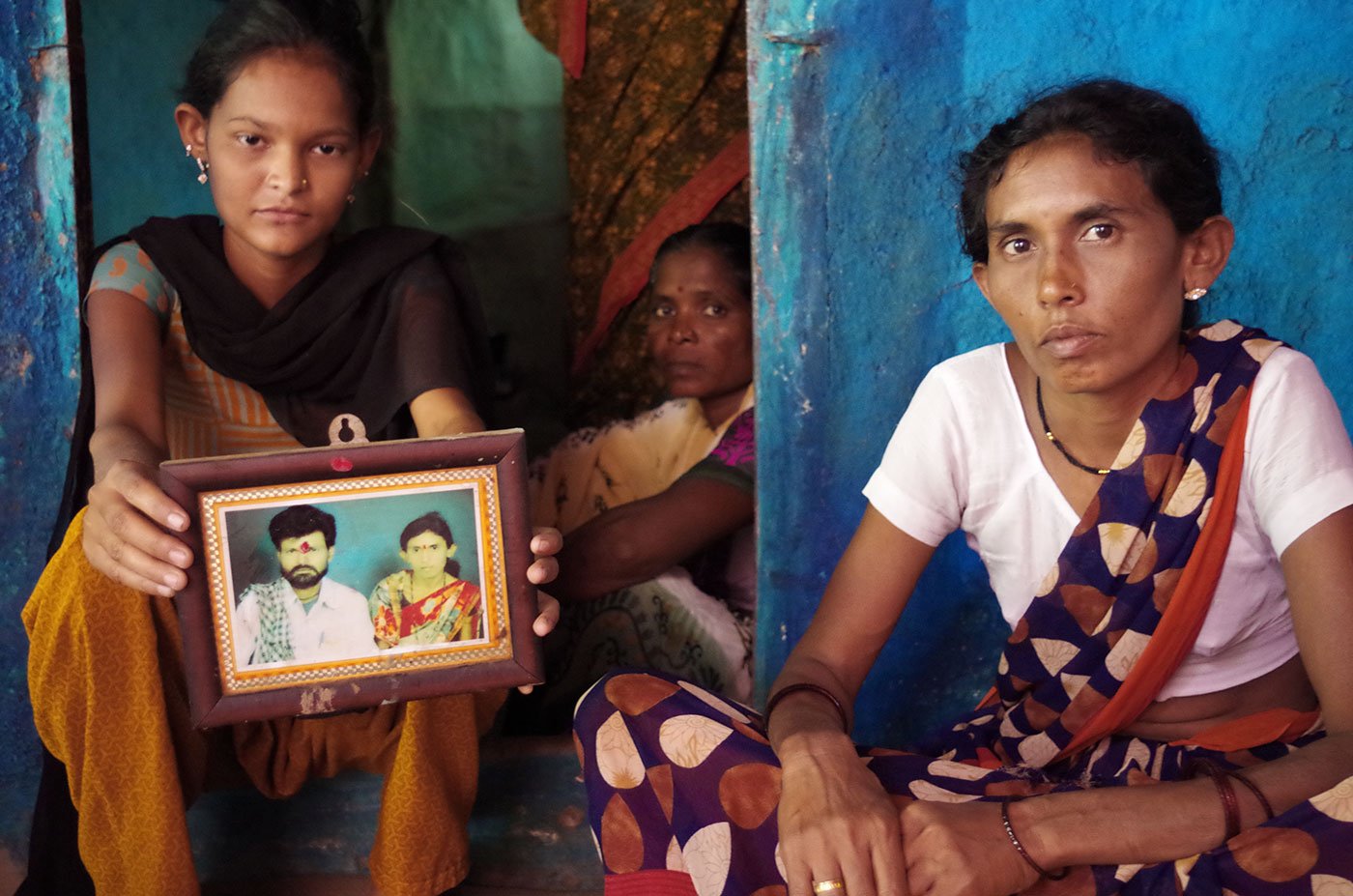 The 2017 poisoning wave points to the profuse use of pesticides in Yavatmal and the desperation of Vidarbha's farmers. In the third of a three-part series, PARI looks at what a Special Investigation Team found

Bandu Sonule, a farm labourer, around 40 years old, collapsed on his employer’s cotton field in Amdi village on September 19, 2017. All day, in sweltering heat, he had sprayed pesticides on cotton plants, just as he had been doing for several days on different farms. He came back home to his own village, Manoli, in Yavatmal district, around three kilometres away – the farm owner brought Bandu on a two-wheeler – after resting on the field for a while.

Two days later, when Bandu’s health did not improve, his wife Geeta took him in a local autorickshaw to the sub-district hospital in Ghatanji, a tehsil town 45 kilometres from Yavatmal city. His complaints: stomach ache, disorientation, tiredness. That night he began to have convulsions. When he complained of vision loss, he was shifted to the Vasantrao Naik Government Medical College and Hospital (GMCH) in Yavatmal in an ambulance, his condition deteriorating by the hour.

On September 23, Bandu – who until a week ago had worked round the clock and was healthy – went into a coma in the intensive care unit (ICU) of the Yavatmal hospital. He died in the morning. 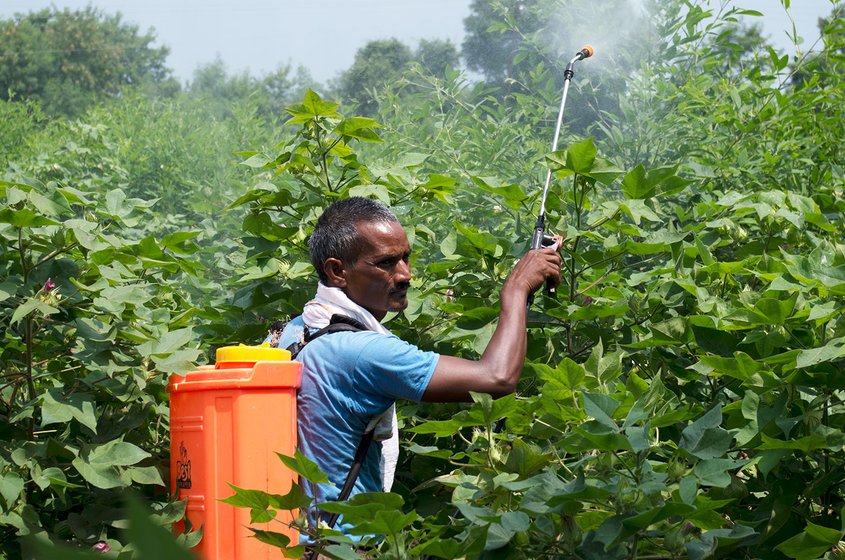 Bandu was a sought-after spraying expert, his frail wife says. “For two months,” she recalls, sitting in her small hut ( see the cover photo ) with their two children, Saurabh, 17, and Puja, 14, “he did not rest for a day; he was constantly at work.” A battery-driven spraying pump that Bandu operated is lying in a corner under the thatched porch of their front yard.

When I visited their home in October 2017, Geeta was still in shock. She did not know what Bandu sprayed and what killed him. Her husband, she said, was trying to make the most of an opportunity when cotton cultivators had to step up spraying due to a ferocious pest attack on their fields in 2017. Bandu’s quest for some extra income claimed his life.

“He could have been saved,” says his friend and neighbour Narayan Kotrange, also a landless farmer who tills a 10-acre farm leased from another farmer in Manoli, “had Bandu got medical help in time.” But the family waited a bit before seeing a doctor, and then the gaps in treatment at the government hospital cost Bandu and many others their lives. All of them labourers or farmers who accidentally inhaled a toxic chemical cocktail during the intensified spraying of pesticides. Those who came to the hospital quickly and got the right medication, survived.

A few lives could have been saved if the GMCH in Yavatmal had the facilities to perform the crucial cholinesterase test to detect organophosphate compounds in the blood of the farmers who, like Bandu, became sick during the July-November 2017 spraying period. Without the test and without the antidote to this poisoning, for several weeks doctors continued to treat the farmers and labourers symptomatically, a doctor at the ICU at the GMCH told me. And crucial blood tests were not done at all.

The report of a Special Investigation Team (SIT) confirms these gaps. The SIT was set up by the state government to probe the pesticide-related deaths and illness in Yavatmal and other parts of Vidarbha. The team was constituted on October 10, 2017, and headed by Piyush Singh, the Amravati divisional commissioner. The SIT’s six other members included Dr. Vijay Waghmare, the in-charge director of the Central Institute of Cotton Research, Nagpur,  and Kiran Deshkar from the Directorate of Plant Protection, Faridabad.

The report , in Marathi, submitted by the SIT in December 2017, was made public only after the Nagpur bench of the Bombay High Court asked the government to do so in January 2018, while hearing a public interest litigation filed by social activist and former Communist Party of India (Marxist) worker, Jammu Anand.

On March 6, the union Ministry of Agriculture reportedly told the Lok Sabha that Maharashtra saw 272 deaths due to pesticide poisoning in the last four years – implying that the 2017 phenomenon was not unusual. But going by GMCH data and the accounts of the doctors who attended to the patients during the 2017 spraying period, Yavatmal had never seen accidental pesticide poisoning of that magnitude – when farmers poured into hospitals complaining of vision loss, nausea, dizziness, nervousness, partial paralysis, panic and other symptoms. At least 50 died, over 1,000 became sick, some for months. (See Lethal pests, deathly sprays and Fumes and fear in Yavatmal )

By setting up the SIT, the state government actually indicated how serious and unusual the matter was. 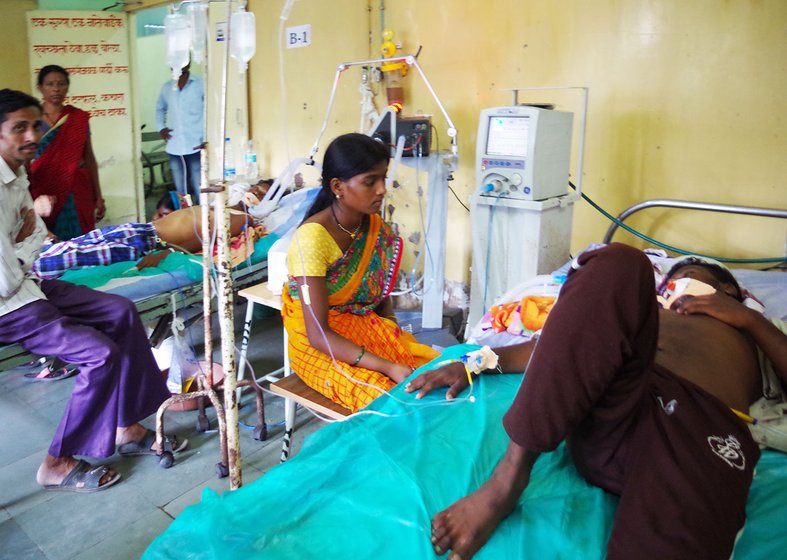 The SIT observes that the district administration did not communicate the gravity and scale of the disaster to the state government. It is also mandatory for the administration to constitute a permanent inter-departmental committee under the Insecticides Act, 1968, and for the state to ensure this is done. The committee has to institute a monitoring team to keep track of whether farmers, pesticides dealers and manufacturers are following the provisions of the law; ensure antidotes are available to the pesticides being sold in the district; and coordinate a quick response if there is a crisis. No such committee existed in Yavatmal, nor did any monitoring mechanism.

In its report, the SIT has recommended that the GMCH at Yavatmal must be equipped to perform the cholinesterase test and it must stock the medicines to handle organophosphate poisoning. This is critical considering the unabated use of chemicals that contain these compounds to control pests on cotton, soyabean and other crops in Vidarbha.

The GMCH in Amravati, the divisional headquarters of western Vidarbha, managed the 2017 crisis better since it can perform the cholinesterase test. Cholinesterase is an enzyme which enables acetylcholine (a neurotransmitter) to function properly.  Organophosphate poisoning inhibits cholinesterase, leading to a breakdown of vital organs, even the nervous system, and eventually causes death. The Amravati hospital also stocks the antidotes to such poisoning, the SIT said in its report.

The SIT has recommended that the government must set up ICUs at the sub-district hospitals at Wani and Pusad, the two tehsil headquarters in Yavatmal, in addition to a separate 30-bed ICU at the Yavatmal GMCH, and a 20-bed ICU in the Akola district government hospital, to handle pesticide poisoning cases as was done by the Amravati hospital.

It has recommended starting a state-of-the-art toxicology lab at the GMCH in Yavatmal, given the district’s long history of pesticide poisoning cases. During the 2017 disaster,  the health authorities did not send blood samples for toxicology tests immediately, a key gap in the post-poisoning management.

The SIT has also recommended a complete ban on monocrotophos, an organophosphate that deploys systemic and contact action on crops, which is banned in many countries due to its toxic effects on humans and birds.

The Maharashtra government complied with a limited-period ban in November prohibiting its sale and marketing for 60 days, but has not enforced a complete ban. The central government has the power to ban monocrotophos in the country under the Insecticides Act.

States too can suspend the licenses of pesticide manufacturers and sellers, or stop issuing new licenses or renewing them. Punjab has done this – at the end of January 2018 it decided to not issue fresh licences for 20 pesticides, including monocrotophos, which the United Nations’ Food and Agriculture Organisation classifies as “acutely hazardous.” Kerala banned monocrotophos a while ago. And Sikkim, a fully organic state, does not allow the use of any chemical pesticide.

The SIT also recommends that the government should not approve of the use of an insecticide unless its antidote too is available in case of poisoning. The SIT report indicates a spurt in the use of plant growth regulators, and asks the government for a long-term scientific scrutiny of such chemicals before they are approved for use.

The report doesn’t mention of the complete breakdown of agriculture extension system – agriculture universities, or the state agriculture department, have no systems to track the arrival of new pesticides or pest-control technologies and their proper use. These systems can play a crucial role in such a situation.

Instead, farmers depend on the inputs dealer or shopkeeper for information about new chemicals. And a dealer or shopkeeper is unlikely to part with information about their acute toxicity when he needs to make a sale. The report indicates that farmers are experimenting with pesticides on the advice of inputs dealers, desperate to contain pest attacks and push plant growth for better yields and better returns. “The concentration of new formulations of pesticides and other chemicals [in the 2017 spraying season] increased the toxicity and possibility of inhalation and contact poisoning in extremely humid conditions,” the report says. 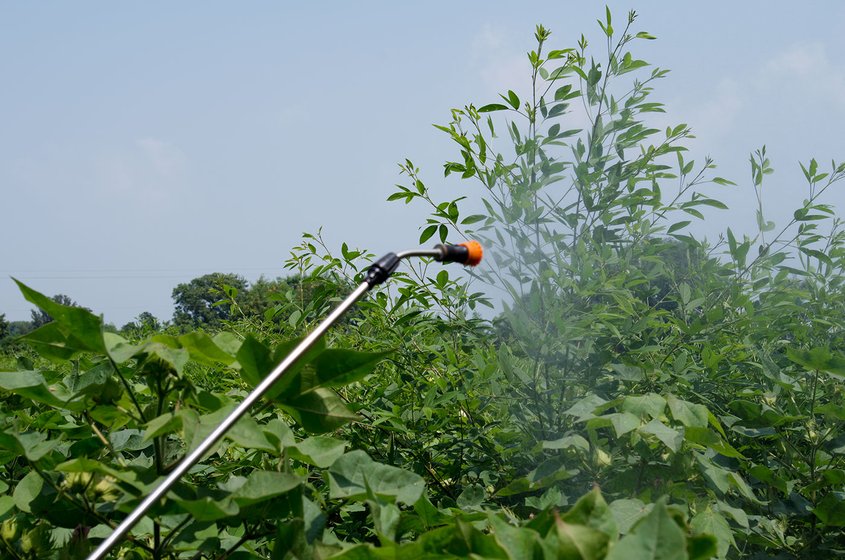 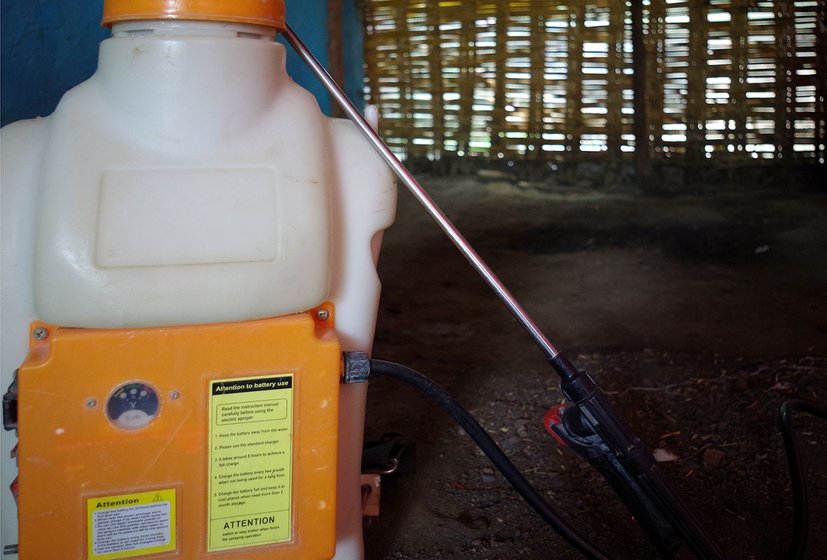 Cotton farmers reacted to the pest attack on their crop by spraying a heavy dose of pesticides, often using battery-operated pumps (right) like Bandu Sonule's

In the 2017 spraying period, the farmers used synthetic pyrethroids, organophosphates, and other next-generation pesticides in addition to plant growth promoters such as gibbralic acid (for enhanced girth), indol acitic acid (to increase the plant’s height), and indol butyric acid (for more adventitious roots). Along with some unapproved chemicals such as humic acid and nitrobenzine.  (These approvals must come from the Central Insecticides Board, set up under the Insecticides Act.) The SIT found that many farmers had  used a combination of the Fipronil and Imidacloprid brands, pesticides that have not been approved for use. The local markets are flush with such imported, ready-to-use chemicals.

There is no way to check this unabated use of unapproved chemicals. The report states that Yavatmal has 16 talukas , but only one post of the district quality control inspector, and even that has been vacant for two years.

Hidden in the report, however, is another major observation – the pest attack on the cotton fields of Vidarbha in 2017 was unprecedented, and especially ferocious was the return of the pink-bollworm. But that is another story…

The SIT report largely pins the blame on farmers and farm labourers for such a massive outbreak of contact poisoning. It says they failed to follow standard rules and protection measures.

Farmers in Vidarbha, the report states, used a combination of insecticides, both approved and unapproved, plant-growth regulators and fertilisers, on fields where cotton plants had grown robust, dense and taller than usual. In the exceptionally humid conditions, the SIT observes, based on the farmers’ testimonies, it was like walking through a mist and inhaling fumes, coming into contact with bigger droplets as they kept spraying.

On February 6, 2018, a Nagpur-based lawyer, Arvind Waghmare, petitioned the Nagpur Bench of the Mumbai High Court, asking for a probe by a second SIT. Waghmare wants the new SIT to fix the blame on the government for the lapses in containing the crisis and on the companies that sell these toxic compounds.