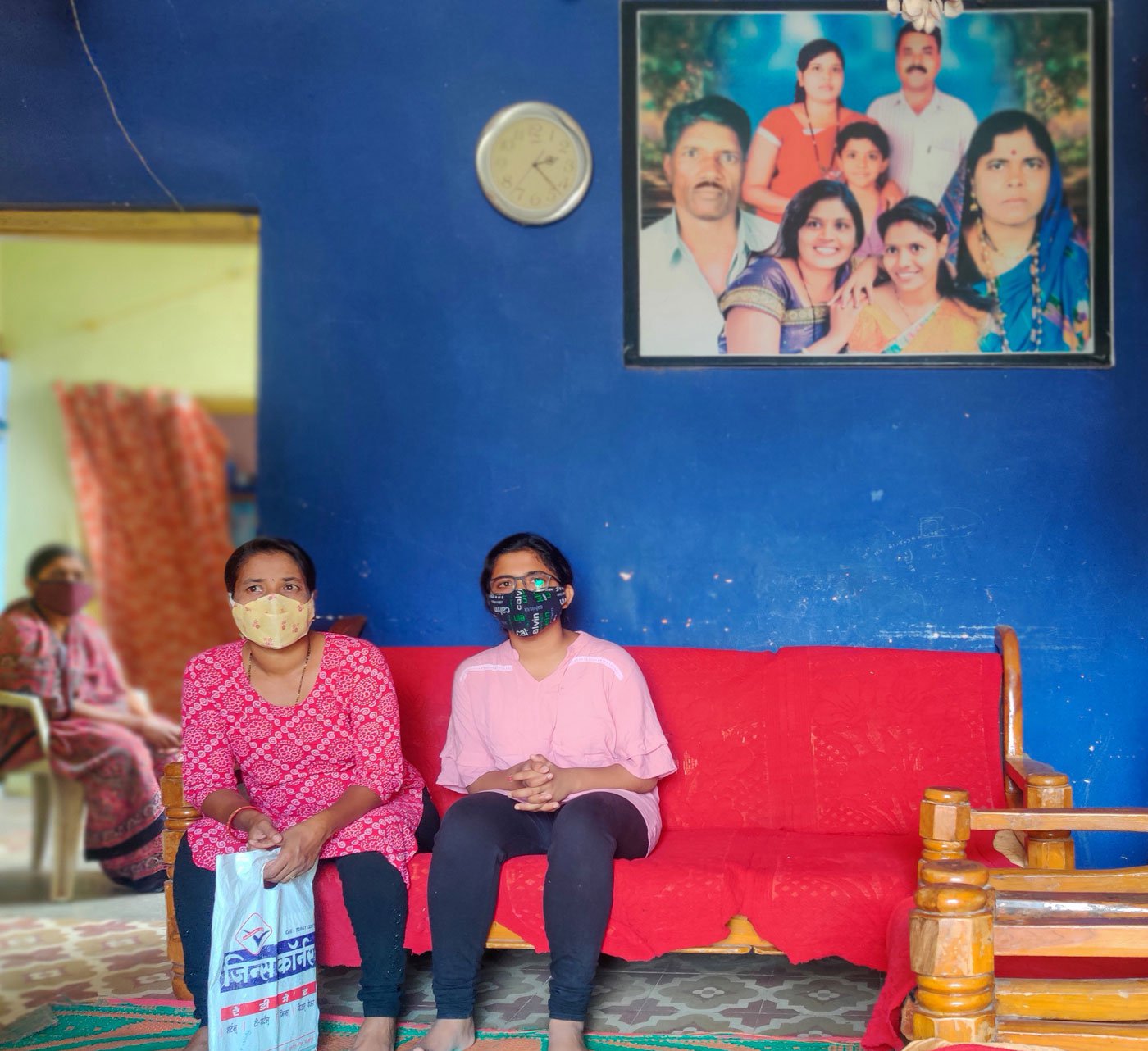 Journalists in Maharashtra are dying of Covid-19 even as they've been demanding frontline-worker status. Without easy access to vaccines and good healthcare, reporters in rural areas are at greater risk

“It’s okay if I die, but we can’t afford the bill,” Harishchandra Dhaware said to his wife, Jayashree, two days before his death. The 48-year-old journalist’s health had turned critical due to Covid-19 and he had been put on a ventilator.

Even then, his concern was not for his own life. Instead, he was worried about the hospital bills. “He fought with me and burst into tears,” remembers Jayashree, 38. “He insisted on going home.”

Twenty years as a journalist didn’t count for much when the coronavirus infected Harishchandra in late March 2021. His job made him more vulnerable.

A reporter working since early 2001 for news outlets in Maharashtra’s Osmanabad district, Harishchandra’s last job was with the Marathi daily Rajdharma . “He was reporting on the second wave of Covid-19. He attended press conferences and was often out on the field,” says Jayashree. “We would worry every time he stepped out. He had high sugar [diabetes] and blood pressure. But he said he had to do his job.”

On March 22, Dhaware started showing Covid symptoms – body ache and fever. “When his health didn’t improve, we took him to the Civil Hospital in town,” says Jayashree. He was admitted after he tested postive. “The facilities were not great there, and his progress wasn’t satisfactory,” adds Jayashree. So on March 31, the family decided to move him to a private hospital in Solapur, 60 kilometres away.

After spending six days there, Dhaware died on the morning of April 6. 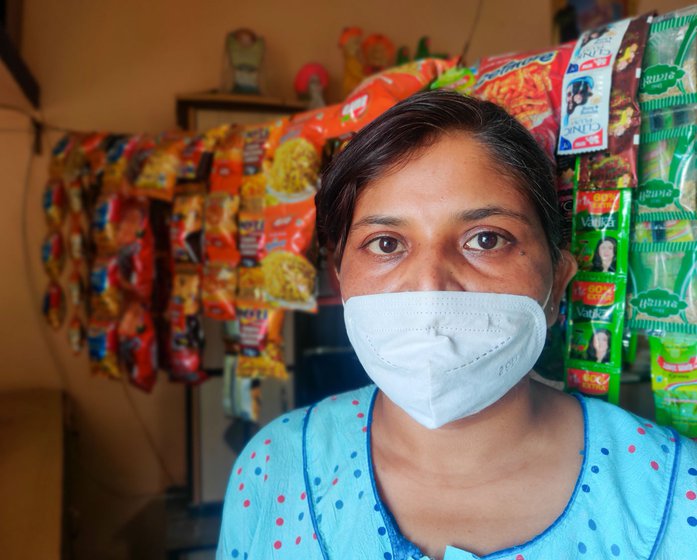 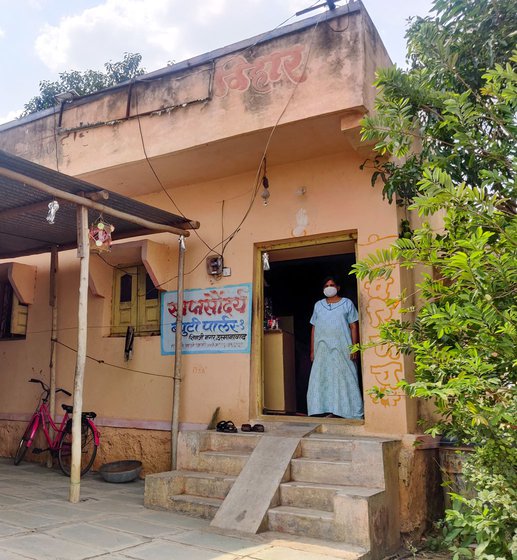 Jayashree Dhaware at her home store and beauty parlour (right). Her journalist husband, Harishchandra, died in April due to Covid

The hospital presented a bill of Rs. 4 lakhs. Harishchandra's monthly salary at the time of his death was Rs. 4000. Jayashree, after his death, sold her gold jewellery for Rs. 1 lakh. “Relatives loaned me some amount. Journalists in Osmanabad contributed [Rs. 20,000] and helped me a bit,” she says. “But we have lost the only earning member of the family, and I don’t know how to repay the debt.”

Harishchandra’s annual income came up to about Rs. 1 lakh. It included a 40 per cent commission on advertisements he brought to the newspaper, on top of his salary. Jayashree runs a small store from their home, selling biscuits, chips and eggs. “I barely make anything out of it,” she says. She used to run a beauty parlour too, but hasn’t had customers in the last year and half because of the pandemic.

The Dhaware family, who belong to the Nav Bauddha community, are eligible for health insurance under Mahatma Jyotirao Phule Jan Arogya Yojana (MJPJAY) – a state government scheme that covers medical expenses (up to Rs. 2.5 lakhs) of families having an annual income of less than Rs. 1 lakh. It also covers journalists accredited by the state government. Under the scheme, the hospital treats a patient, but bills the state government.

The hospital put Harishchandra on a waiting list to apply for the scheme, says Jayashree, who was also ill from having contracted the coronavirus, and spent three days at Osmanabad’s Civil Hospital. “We told them to treat him in the meanwhile. But he died before the application was processed. I think they purposely delayed it.” Jayashree was released the day Harishchandra died.

Across the country, the issue of journalists’ safety, especially of field reporters, is being raised ever since the second wave of Covid-19 started in February this year. While the central government has not recognised journalists as frontline workers, states like Odisha, Tamil Nadu, Karnataka, Uttar Pradesh, Uttarakhand and Bihar, have included journalists in the category and are vaccinating them on priority.

In Maharashtra, however, despite protests and appeals to the state government – by some cabinet ministers too – Chief Minister Uddhav Thackeray has not included journalists in the priority category. 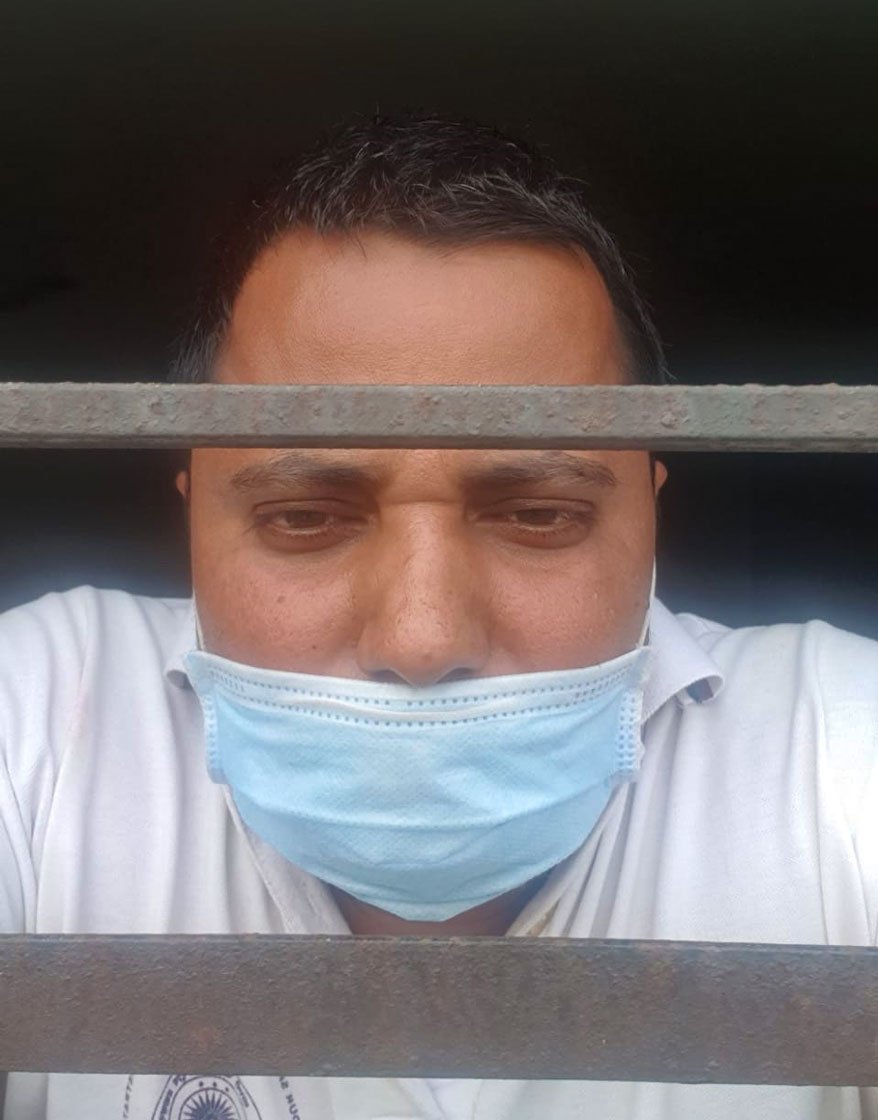 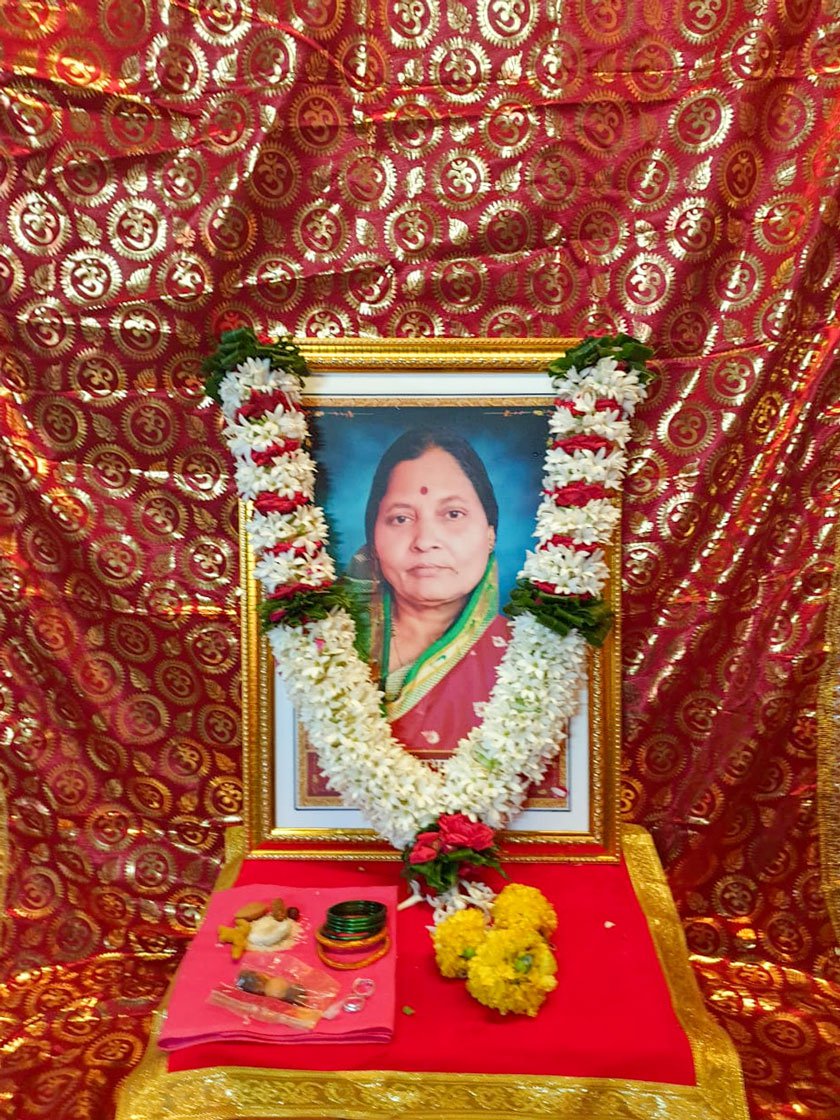 TV journalist Santosh Jadhav rarely goes out now. His mother (right) died from getting infected when he had Covid last year

S.M. Deshmukh, chief trustee of Marathi Patrakar Parishad, a union of nearly 8,000 journalists in Maharashtra, says, “132 journalists died in the state between August 2020 and May 2021.” But that’s a conservative estimate say reporters in rural areas – the list could be missing names reporters from lesser-known local news outlets.

“It is possible that [information of] some cases from rural areas has not reached me,” admits Deshmukh. About 6,000 journalists – not all of them MPP members – have been infected with Covid-19 in the state so far, he says. “In several cases, even though they recovered, their family members died.”

On May 11, 90 journalists from across Maharashtra attended an online meeting to intensify the demand for frontline-worker status. With Covid-19 spreading into small towns and villages, the safety of journalists in rural areas is of greater concern now, for they may not have access to good healthcare without travelling some distance.

According to research on journalists’ deaths due to Covid-19 in India, by New Delhi-based Institute of Perception Studies, 138 out of 219 deaths between April 1, 2020 and May 12, 2021 were in non-metro regions.

Journalists in rural India work hard for little pay, without any recognition. They continue to be neglected, says Santosh Jadhav, a 37-year-old journalist in Osmanabad. “Journalists are glorified as the fourth pillar [of democracy] and as Covid warriors. Journalism is even called an essential service, but we don’t get priority for vaccines,” says Jadhav who reports for a Marathi television channel headquartered in Mumbai. “We are supposed to raise awareness. We are expected to broadcast proper information. We voice other people’s concerns. But hardly anyone is listening to the concerns of journalists.”

The situation is worse for journalists like Jadhav. “If you are in Mumbai or Delhi, your voice counts. What have news channels and papers done to protect their reporters in rural areas in these times? How many editors have reassured their reporters? How many have campaigned for their vaccination on priority basis?” he asks. “Reporters in rural areas hardly get a decent salary. What will happen to their children if they die?” 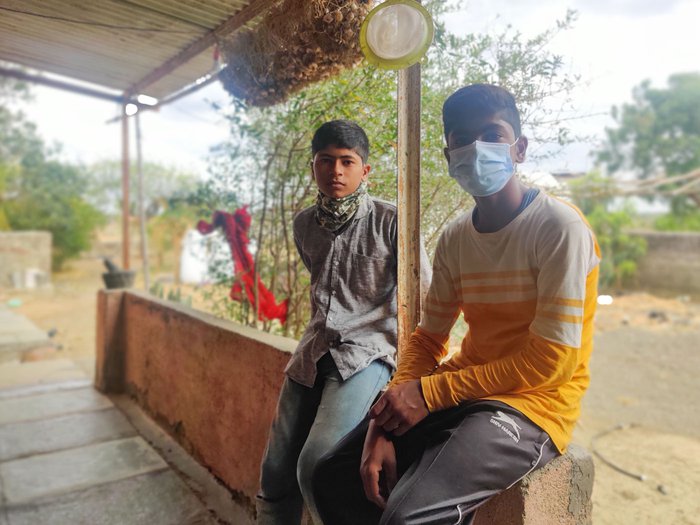 Yash and Rushikesh have been unusually quiet after their father's death

With Covid-19 spreading into small towns and villages, the safety of journalists in rural areas is of greater concern now, for they may not have access to good healthcare without travelling some distance

Dhaware’s 18-year-old daughter, Vishakha, is in Class 12. She wants to become a doctor, but that's in jeopardy now. “I can’t afford her fees,” says mother Jayashree as Vishakha looks on.

Vishakha (in the cover photo, wearing glasses) remembers her father being chatty when she video-called him four days before his death. “April 2 was his birthday,” she says. “I called him to wish him. He asked me to concentrate on my studies and told me to not take my eyes off the books even though he wasn’t around. He wanted me to study as much as possible.”

With Vishakha's education on the line, Jayashree is worried about the loans she took to pay the hospital bill. “My relatives have been nice enough to not ask back the money, but these are bad times and everyone is struggling for funds,” she says. “I need to repay my debt, but I don’t know how. I am on my own.”

Some Osmanabad journalists feel it’s better to stay away from the field rather than risk leaving behind a family in financial crisis.

Jadhav, who has two children, 6 and 4, hasn’t been going out since the second Covid wave started in February. He paid a high price for reporting from the field during the first wave, in 2020. “My mother died because of me,” he says. “I tested positive on July 11. She was infected after that. I recovered, but she didn’t. I couldn’t even be there for her funeral. I don’t have the courage to step out now.” He sources videos from his contacts in different parts of Osmanabad district. “I head out only to do an important interview or a piece to camera.”

But Dadasaheb Ban, 39, preferred reporting from the spot. A print journalist from Kasari village in Beed district’s Ashti taluka , he wrote for Lokasha , a Marathi daily in the district. He didn’t even consider going to secondary sources for his reports.

“He visited hospitals, testing centres and other places and wrote about the situation on the ground,” says his wife, Meena, 34. “He caught the infection in late March while reporting about the new wave.” 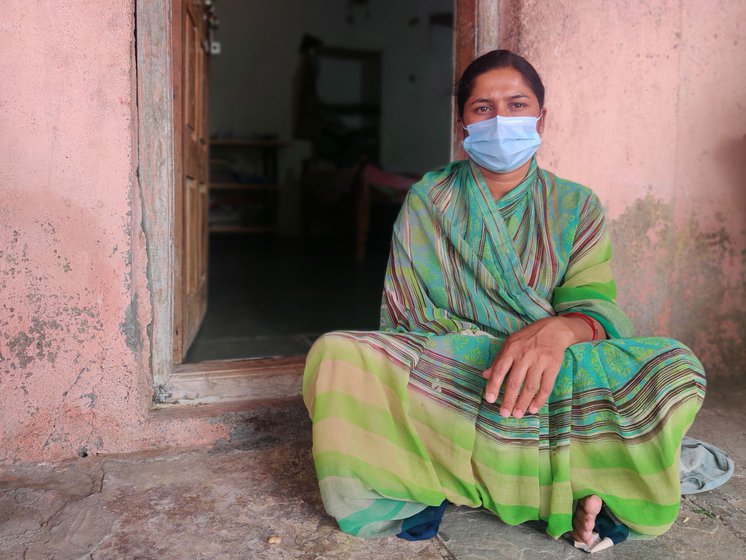 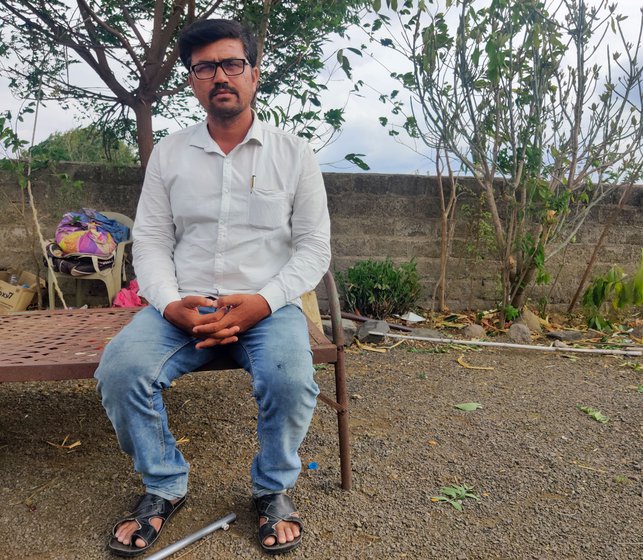 Ban’s family took him to a private hospital in Ahmednagar, 60 kilometers from Kasari. “But his health did not improve,” says Meena. “His oxygen level was down to 80. It kept getting worse.”

Four days later, Ban, who had no comorbidities, succumbed to Covid-19. “We spent one lakh rupees for the hospital charges and medicines,” says Ban’s nephew Dilip Giri, 35. “We borrowed money from friends and relatives to pay the hospital bill. My uncle did not make more than Rs. 7,000-8,000 a month. We don’t have that kind of savings.”

Ban could have also been treated under MJPJAY, which covers farmer families in the state’s 14 agriculturally distressed districts, including Beed. Ban’s family owns a five-acre farm in his village, which made him eligible for the scheme.

The private hospital in Ahmednagar where Ban was treated refused to enlist him under MJPJAY. “They told us to look for another hospital if we wanted to get the benefit of the scheme,” says Meena. “At that moment, when you are struggling to find a decent hospital, you’re not thinking about money, but only about saving the person. But we could neither save the person nor the money.”

Rushikesh and Yash, 15 and 14, Ban and Meena’s sons, face an uncertain future now. Their father wanted them to study and become doctors. “He was not keen for them to become journalists,” says Dilip. “Their future is now in their mother’s hands. Her only source of income is farming. We grow only jowar and bajra . We don’t cultivate cash crops,” he adds.

Sitting next to each other in silence, the teenagers listen to our conversation. “They have been unusually quiet since they lost their father,” says Dilip. “They were playful, constantly playing pranks. But once in a while now, they say they want to go where their pappa has gone.”
#Marathi-Patrakar-Parishad #hospital-bills #journalists #frontline-workers #Covid-19 #second-wave #vaccination #MJPJAY
Parth M.N.
@parthpunter