He was the biggest bull I had ever seen, and yet four-year-old Kundavi was playing with him as if he were a puppy. (If you can imagine 1,200 pounds of muscle and bone on a puppy).


‘Bulli Boy’, as she called him, had curved, sharp horns and an enormous hump. It was the night before Pongal (harvest festival) and Kundavi had brought me along to bid good night to this handsome Kangayam bull in Kuttappalayam village near Tiruppur in Tamil Nadu. 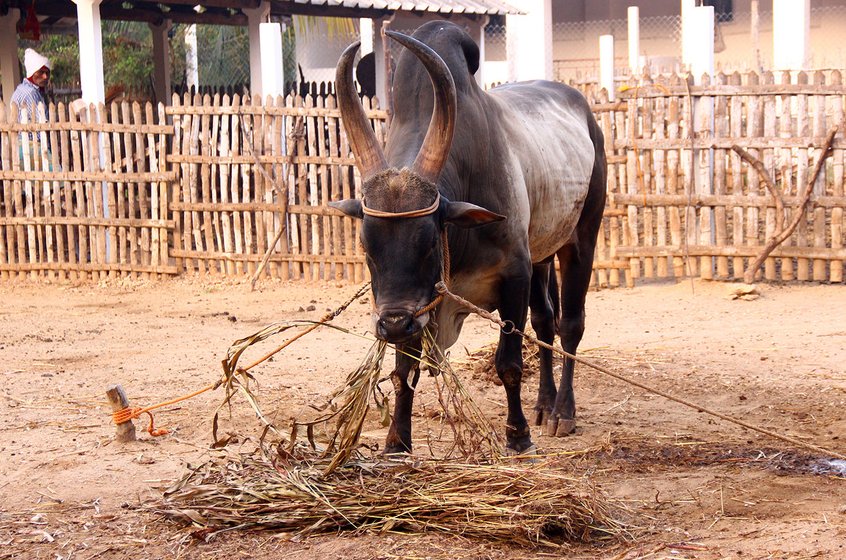 She went close to the huge animal and sweetly whispered good night. As the daughter of a livestock breeder – her father heads the Senaapathy Kangayam Cattle Research Foundation – she knew well what a fine specimen Bulli Boy was.

At 16 years, age had been kind to his good looks, but had mellowed him. He no longer pawed the ground or shook his horns to scare away strangers.

An indigenous species, Kangayam were once a common sight in the Kongu region (around Erode and Coimbatore) of Tamil Nadu. Today, they are rare. Most cattle here are exotic. But the Jerseys, Holsteins and Brown Swiss look terribly out of place in this scrubby, thorny and dry land. 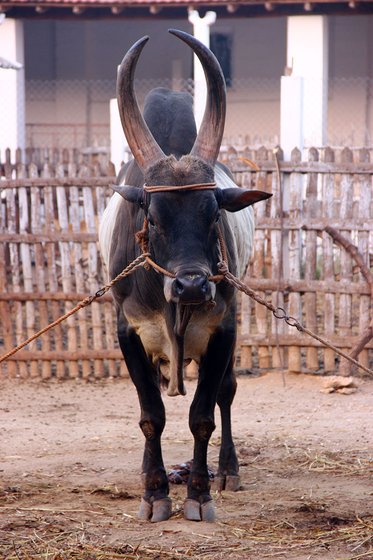 With age, Bulli Boy's hump has tilted to one side

Bulli Boy looks like he owns the place. Age has seen his hump tilt to one side. He remains a great stud and still sires many calves, as Kundavi’s father Karthikeya Sivasenapathy points out. But we didn’t linger at the shed that night as Kundavi wanted to say good night to the dogs. Yet, the same girl, so unafraid of the fearsome bull, ran squealing from a tiny farm pup that chased her, wanting to play. The rest of us were laughing too hard to rescue her from the 'ferocious' animal.

It was a nippy January morning that followed. I was at the cowshed long before dawn. The only sound was Bulli Boy’s audible breathing, comforting and menacing at once. The cows – mostly his harem – were placid. Six of them had calved and were being milked, a mere squirt in the bucket compared to the great milkers of the world. (Kangayam cows produce two litres a day on average, compared to upward of 20 litres of some other breeds. Much of this goes to the growing calf. Only a little is collected for domestic use). 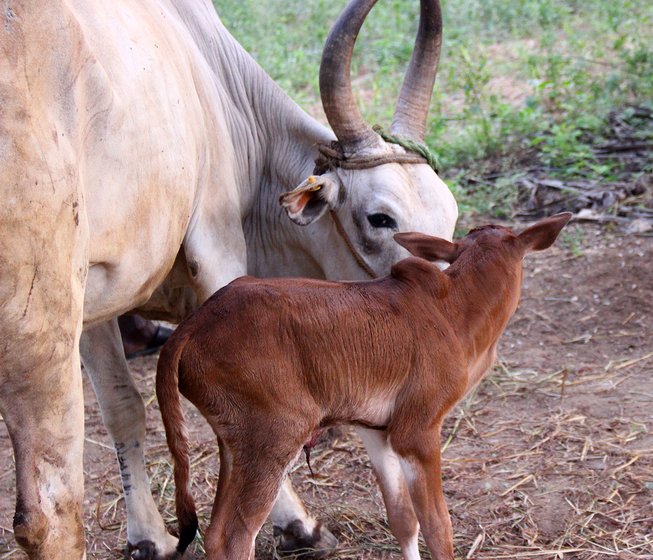 Cow with calf: calves are born red and later fade to a white

Pongal, the harvest festival, is very special in rural Tamil Nadu. It’s when farmers give thanks to the sun god for their produce. They place sugarcane and turmeric bunches around a mud-pot, and cook (over a wood fire) rice and jaggery together with milk, cardamom and fried cashews. This dish (called sakkarai pongal ) is offered in prayer. Circled with a lump of burning camphor, it is served on banana leaves.

After a delicious lunch, we went back to the barn. This time, Kundavi wanted to see the bull that was recently purchased to bring in new blood to the farm. He was a young savage and his eyes had none of that calm you see in cows and calves. They held in their blackness a sense of the terror he could at any moment unleash.

Both the bulls at the farm are classic Kangayams – white, with blackish markings on their shoulders, backs and humps. Kangayam calves are red when born, but later fade to white. Stud bulls develop black patches because of the testosterone coursing through their big bodies. (Castrated bulls turn completely white). 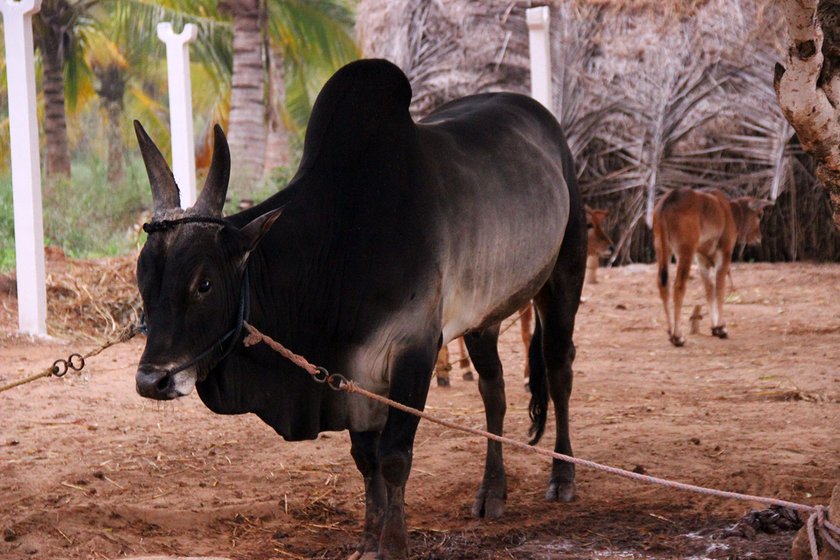 Kangayams are also unique among cattle in that cows too have humps and horns like the bulls. Traditionally, they worked alongside bullocks, ploughed and also carried water from dug wells. They laboured till the very end of their pregnancies and were back at work within a week after delivering their calves. Could an exotic breed have coped with that, scoffs Karthikeya.

Today, cows and bulls are no longer central to farm work in many parts of Tamil Nadu; tractors have taken over. But cattle are still worshipped on the day after the harvest festival. Called ‘ maatu pongal ’ (literally: pongal for the cows), it’s celebrated on January 15 or 16. The animals are bathed, their horns painted in bright colours and their foreheads smeared with sandal paste and kumkum . A thanksgiving of sorts, they are treated to a fine meal of sakkarai pongal and sticks of sugar cane. 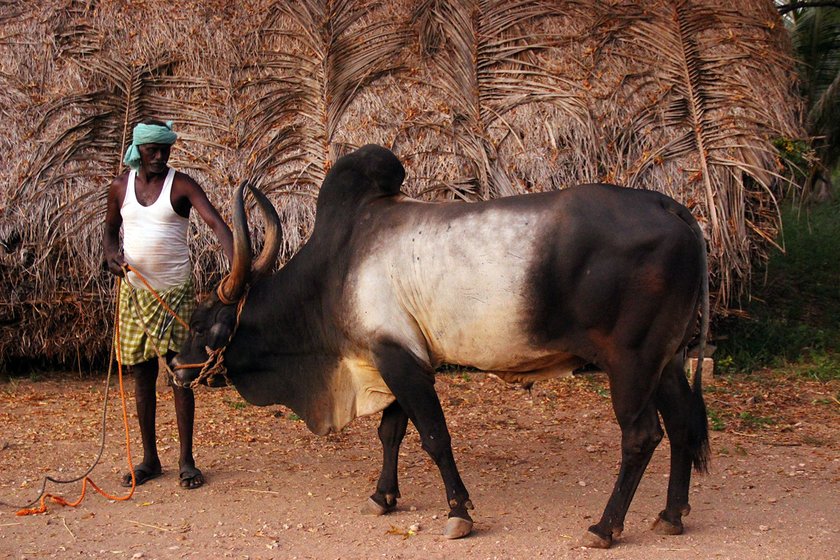 Bulli Boy is taken for a walk

Cows are now kept for milk. But Kangayams, with low yields, are being replaced by breeds that struggle with the local climate, vegetation and an array of diseases that can kill them off. The exotic breeds need expensive feeds, antibiotics and many visits by the vet. They struggle to cope with the fierce sun at the many cattle shanties. But some farmers are willing to go along with all of this – and a complete remake of their sheds – because the short-term revenue from milk cushions them from the long-term tragedy that is the loss of a species.

Late that evening, we watched the new bull taken out for a walk. Two strong and experienced farmhands held its ropes taut, and yet it seemed as if the bull was taking them for a walk. Karthikeya – who was giving the new bull time to get used to him – was rubbing down Bulli Boy. He recalled a Tamil proverb that says raising a bull is half feeding it and half rubbing it. Give Bulli Boy a rub down, he told me. I went up to the huge animal and patted his warm back. But a minute later, as if sensing my fear, he set his skin trembling, and turned his head and looked at me. Somewhere in those soft eyes, there was the hint of old mischief. Leave Bulli Boy to Kundavi, I thought and walked off. It’s the farm puppy’s company for me, any day. 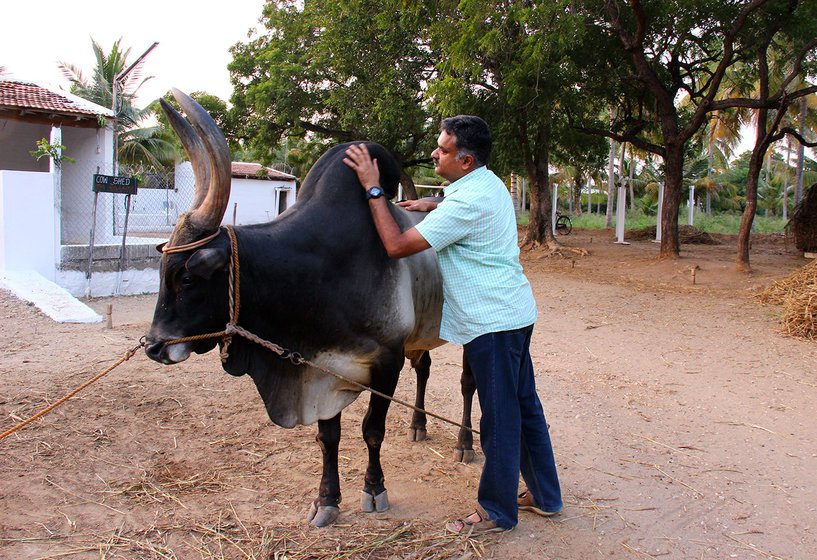