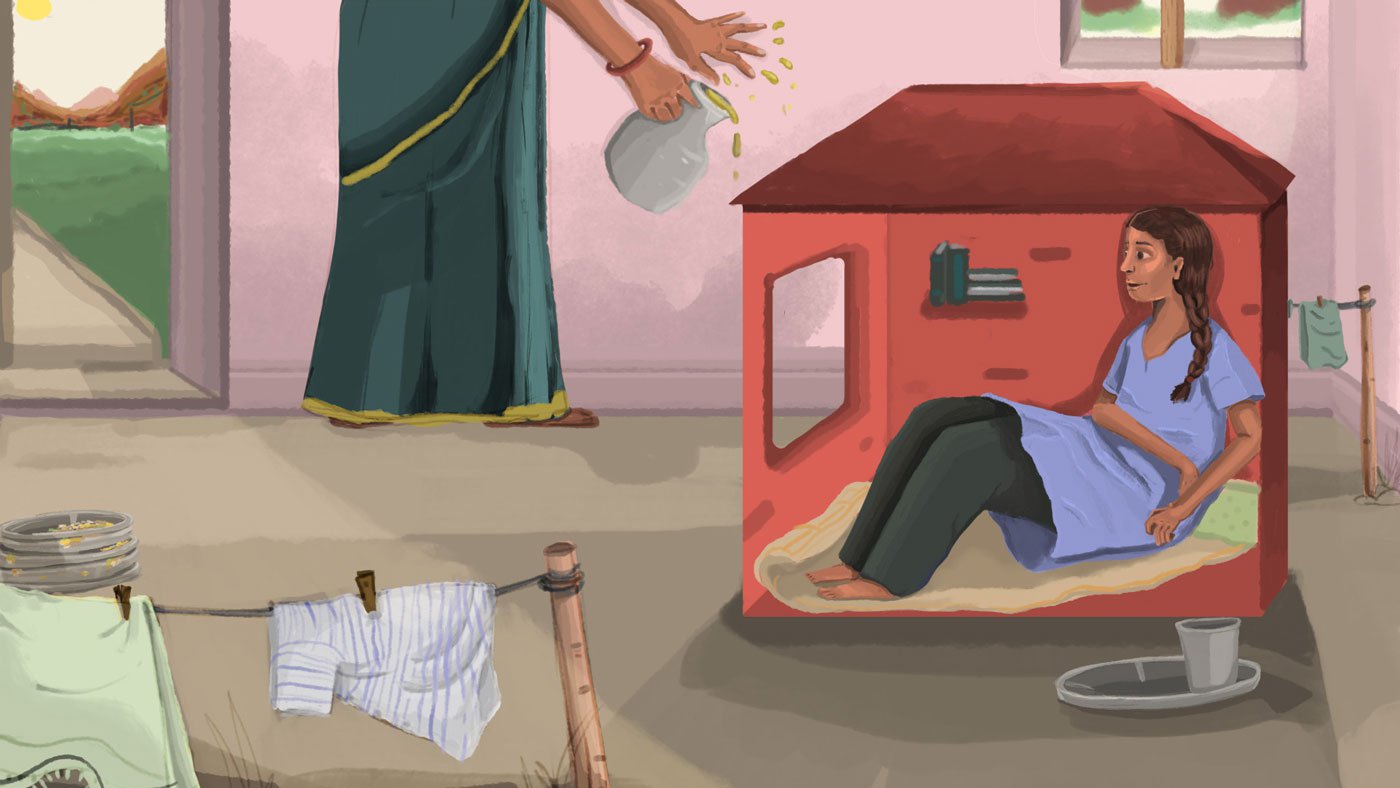 No country for menstruating girls and women

In Uttarakhand’s Udham Singh Nagar district, women speak about the deep prejudices and hardships that are forced on them during menstruation and childbirth

“Whatever I learn in school is the opposite of the reality in my home.”

Priya is a 16-year-old schoolgirl from the Rajput community in the mountain state of Uttarakhand. She is speaking about the strict and clearly laid-out rules she is forced to follow when she is menstruating. “It is almost like living in two different worlds. At home I am made to isolate myself and follow all the customs and restrictions, and in school I am taught that women are equal to men,” she says.

A student of Class 11, Priya’s school is in Nanakmatta town, seven kilometres from her home in the village. She cycles there and back every day. A good student, she initially tried educating herself on the subject. “I read books and I thought I would do this and that; I would change the world. But I was not able to convince my family that these customs have no meaning. I live with them day and night but I am unable to make them understand that these restrictions have no meaning,” she says.

Her initial unease and discomfort at the rules and regulations has not diminished but she just goes along with her parents’ thinking now.

Priya and her family live in the terai (lowland) region, the highest yielding agricultural region in the state (Census 2011). The region has three harvests – kharif, rabi and zaid – and most of the population is engaged in agriculture and keeps livestock, mostly cows and buffaloes. 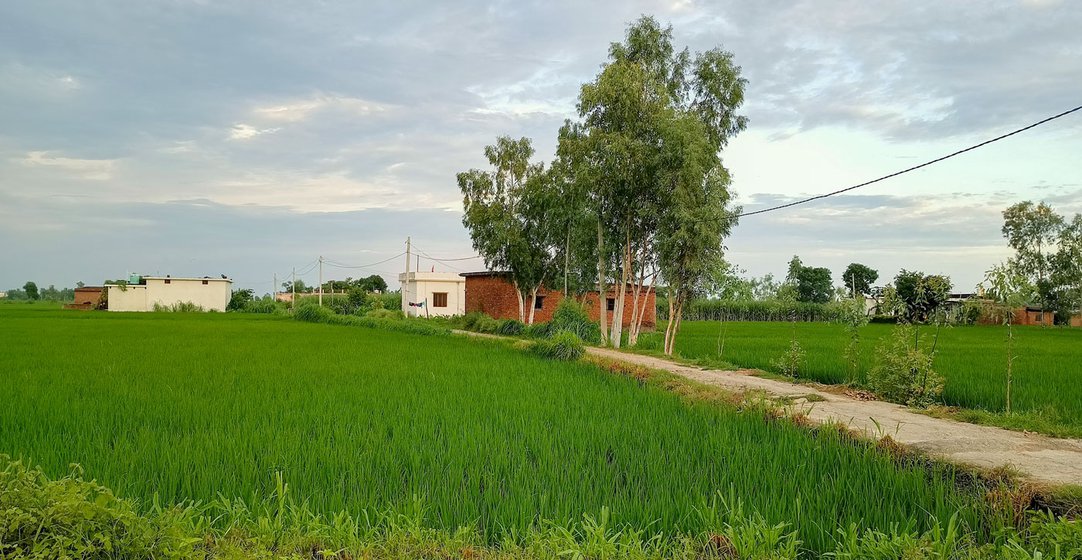 Paddy fields on the way to Nagala village. Agriculture is the main occupation here in this terai (lowland) region in Udham Singh Nagar district

In another Rajput home close by, Vidha describes her living arrangements when she is menstruating: “For the next six days, I will be confined to my room. I have been told [by her mother and paternal grandmother] not to roam around. My mother will bring me whatever I need.”

The room has two beds, a dressing table and almirah. The 15-year-old Vidha will not sleep on her regular wooden bed but on a flimsy cot covered with a sheet that she says gives her a backache, but she does it for “my family's peace of mind.”

During this strictly mandated isolation, Vidha is allowed to go to school, but must come straight back to this room in her home in Nagala village in Sitarganj block. Her mother’s phone and some books help the Class 11 student pass the time.

When a woman begins to sit separately from others in the family and moves her things to one side it’s a signal to everyone that she is menstruating. Vidha resents the fact that who is menstruating and who is not, is public knowledge. She says, “everyone gets to know and discusses it. She [the menstruating person] is not allowed to touch the animals and fruit-bearing trees, or cook and serve food, and even accept offerings from the temple.”

This view of women as ‘impure’ and ‘inauspicious’ is reflected in Udham Singh Nagar’s demographics which show a poor sex ratio of 920 females per 1,000 males, lower than the state average of 963. Also, the literacy rate at 65 per cent is for women is significantly lower than among men – 82 per cent (Census 2011). 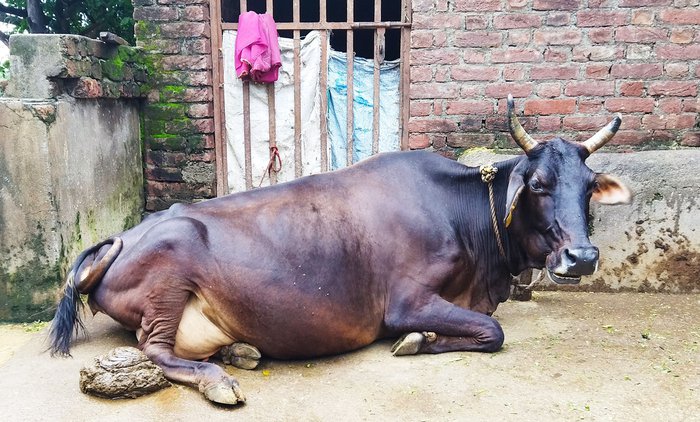 Most households in the region own cattle. Cow urine ( gau mutra) is used in several rituals around the home

This view of women as ‘impure’ and ‘inauspicious’ is reflected in Udham Singh Nagar’s demographics which show a poor sex ratio of 920 females per 1,000 males, lower than the state average

Below Vidha’s bed is a thaali, a bowl, steel tumbler and spoon that she must use to eat during this time. On the fourth day she wakes up early to wash and dry these utensils in the sun. “Then my mother sprays gau mutra [cow urine] on the dishes, washes them again and places them back in the kitchen. I am given different utensils for the next two days,” she says, detailing the elaborate procedures that she has to follow.

She is prohibited from moving around outside the house and wearing clothes “other than what my mother has given me to wear during those days,” she adds. The two pairs of clothes she wears must be washed and hung at the back of the house to dry and are not to be mixed with other clothes.

Vidha’s father is in the army and it’s her mother who manages the household of 13 people. Isolating in such a large family is awkward for her, especially explaining it to her young brothers: “My family members have told them that this is an illness for which girls have to live in isolation from others. If someone unknowingly touches me, then they are also considered ‘impure’, and only after they have been sprayed with gau mutra will they be ‘clean’. During those six days, everything that comes into contact with Vidha is sprayed with gau mutra. It helps that the family owns four cows so their urine is readily available.

The community has relaxed a few practices, but marginally. So while in 2022 Vidha gets a separate bed to lie on, Beena, in her 70s, from the same village, recounts how she had to stay in a cattle pen when she menstruated. “We would spread pine leaves on the floor to sit,” she recalls.

Another older woman remembers a time when, ”I would be given pheekhi [sugarless] chai along with dry rotis . Or we would get rotis made of coarse grain such as that given to animals. Sometimes they would forget about us and we would stay hungry.” 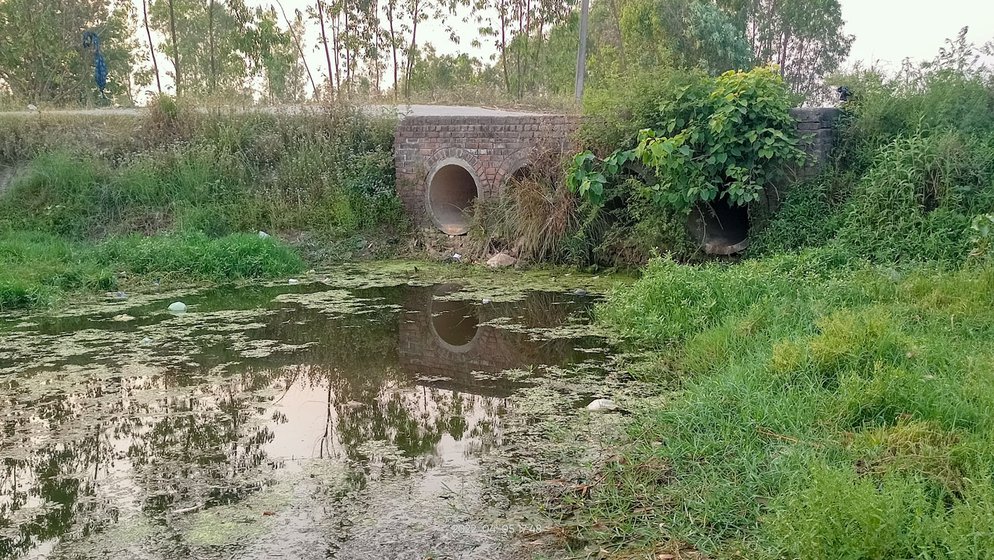 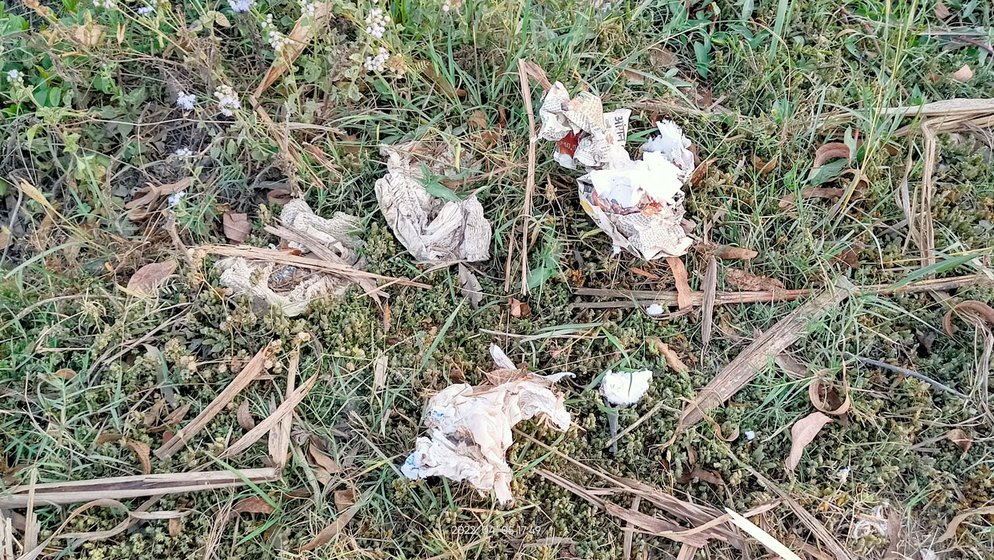 Left: The local pond in Nagala is about 500 meters away from Vidha's home. Right: The used menstrual pads  that are thrown here along with other garbage

Many women and men believe that these practices are ordained in religious texts and so cannot be questioned. Some women did say they are embarrassed but they also added that they believe the gods will be displeased if they don’t isolate themselves.

As a young man in the village, Vinay agrees that he rarely meets or comes face-to-face with menstruating women. Growing up he heard the phrase, ‘ Mummy achoot ho gayi hai [Mummy has become untouchable now]’.

The 29-year-old lives with his wife in a rented room in Nanakmatta town. Originally from Champawat district of Uttarakhand, he moved here a decade ago when he began teaching in a private school. “We are never told that it is a natural process. If we stop following these restrictions from childhood, men will not look down upon any girl or woman when she gets her periods,” he says.

Purchasing and later disposing sanitary pads is a challenge. The solitary shop in the village may or may not stock them and then young girls like Chhavi say they get strange looks from the shopkeeper when they ask. Going home, they are forced to hide their purchases from prying eyes. Finally, disposing of the pads calls for a walk to a canal 500 metres away, a quick look around to check nobody's watching before it’s flung in.

The idea of ‘impurity’ extends to those who have just given birth as well. Lata has teenage children but she remembers her time well: “Instead of 4 to 6 days [for menstruating girls], new mothers are kept apart from the rest of the household for 11 days. Sometimes this may even be 15 days, that is, until the naming ceremony of the child is done.” Lata is mother to a 15-year-old girl and 12-year-old boy and says a line of cow dung is drawn to demarcate the bed the new mother sleeps on from the rest of the house. 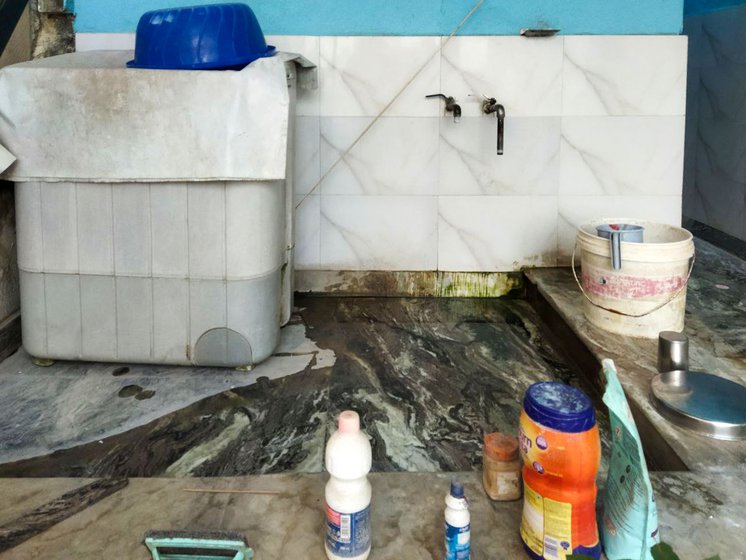 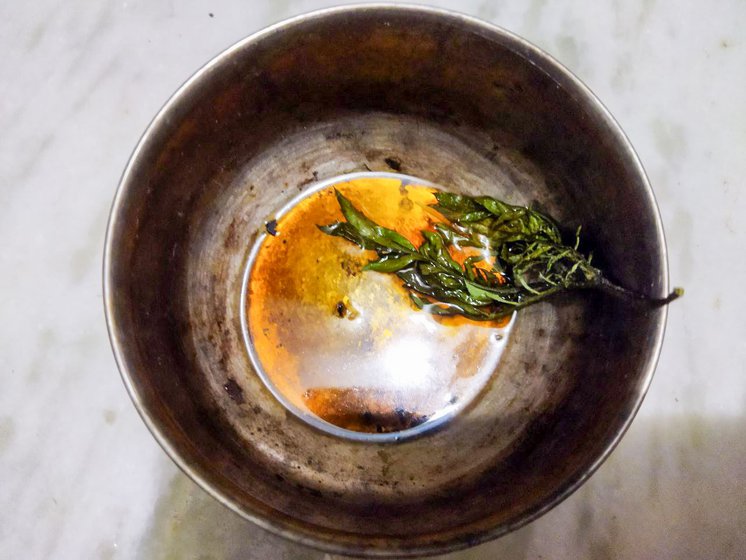 Utensils (left) and the washing area (centre) that are used by menstruating women in Lata's home. Right: Gau mutra kept aside for 'purification'

While living in Jhankat village of Khatima block, Lata abided by these rules as she was living with her husband’s extended family. She stopped briefly only when she and her husband moved out. “The last few years, we have started believing in these traditions again,” says Lata, who holds a master’s degree in Politics. “If a menstruating woman falls ill, it is said that gods have become unhappy. All problems [in the family and village] are attributed to the non-compliance of these practices,” she says in an attempt to explain her compliance.

No one in the village will accept even a glass of water from the hands of a family in which there is a newborn child. The entire family is considered ‘impure’ and the sex of the child changes nothing. Anyone who touches the woman or the newborn baby is purified by sprinkling gau mutra. Usually, on the eleventh day, the woman and the baby are bathed and washed with gau mutra , following which the naming ceremony takes place.

Savita, Lata’s 31-year old sister-in-law, was married when she was 17 and forced to follow these customs. She recalls how in the first year of her marriage she had to eat with only a sari to cover herself – the custom of no undergarments had to be strictly followed. “After the birth of my first child I stopped that,” she says, but admitted that she later reverted to sleeping on the floor when she got her periods.

Growing up in homes where such practices are followed, boys in the area are not quite sure what to think. Nikhil is a young boy from Barkidandi village who is studying in Class 10. He says he read about menstruation last year and didn’t quite understand it but, “I still thought the idea of keeping women separate is unreasonable.” However he says if he talks about this at home he will be scolded by the adults in the family. 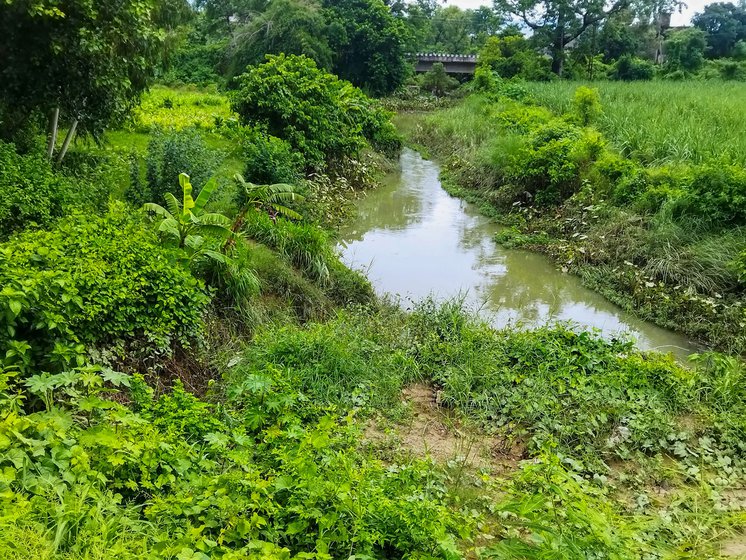 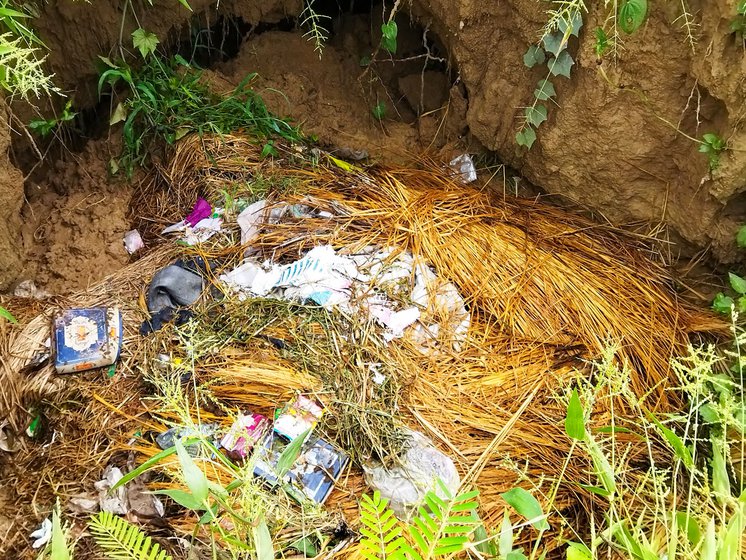 Left: The Parvin river flows through the village of Jhankat. Right: Pads and other garbage around the area

This is a fear that Divyansh also shares. A 12-year-old schoolboy from Sunkhari village, he has been watching his mother sit apart for five days in a month but never understood why. “It is so normal for me that I think that this happens to all women and girls. But now I don't feel it is right. When I grow up will I go along with the custom or can I stop it?,” he wonders.

No such conflict is felt by an elder in the village who stated, “Uttaranchal [Uttarakhand’s old name] is the abode of the gods. So [these] customs are important here,” says Narender.

He says girls in their community used to be married off at 9-10 years, before they began menstruating. “If she started menstruating, how would we do kanyadaan?” he says, speaking about the marital custom of ‘gifting’ a girl to her husband. “Now the government has changed the age of marriage to 21. Since then, the government and us have different rules.”

This story was reported in Hindi. The names of people have been changed to protect their identities.

The PARI Education team would like to thank Rohan Chopra for his help with this piece.

Anupama Daga is a recent graduate in Fine Arts and has an interest in illustration and motion design. She likes to explore the weaving of text and images in storytelling.