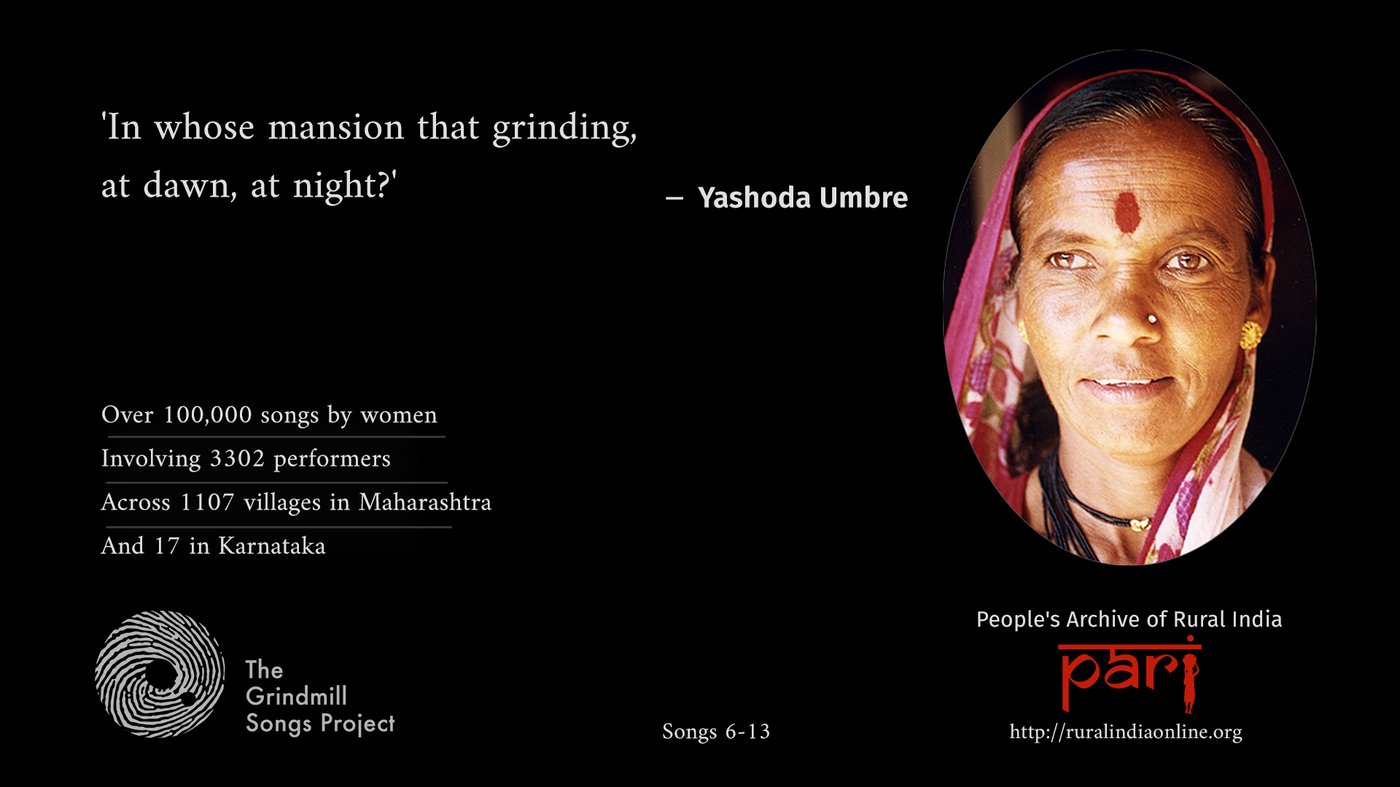 Yashoda Umbre and her family were landless farmers in Rajmachi village of Mawal taluka in Pune district, when the Grindmill Songs team met them in 1997. It was not clear if they were agricultural labourers or tenant farmers. Her house was large. "My mother-in-law threw my husband and me out of our ancestral [joint family] home,” she said. “My husband and I built this house [where we now live] with our own labour.”

By the 1990s, because of its famous fort, Rajmachi has come under the spell of homestay-tourism. Villagers had built large houses to accommodate tourists, using their own skills of masonry and carpentry.  Yashoda and her husband had also built a bathroom with a proper door for the convenience of tourists. She was rather proud of her bathroom as well as the large house. One of her sons gave us a visiting card.

Yashoda’s eldest son was mentally challenged. The other three were students; one was away at college in Mumbai, and the two youngest sons were studying in the village school.

Yashoda, then 46, learnt grindmill songs from her mother, who lived in Dudhivare village in Mawal taluka . When we visited her, she was reluctant to sing. She said her brother’s daughter had died after being poisoned by her in-laws – and according to custom, women then don’t sing for at least a year. 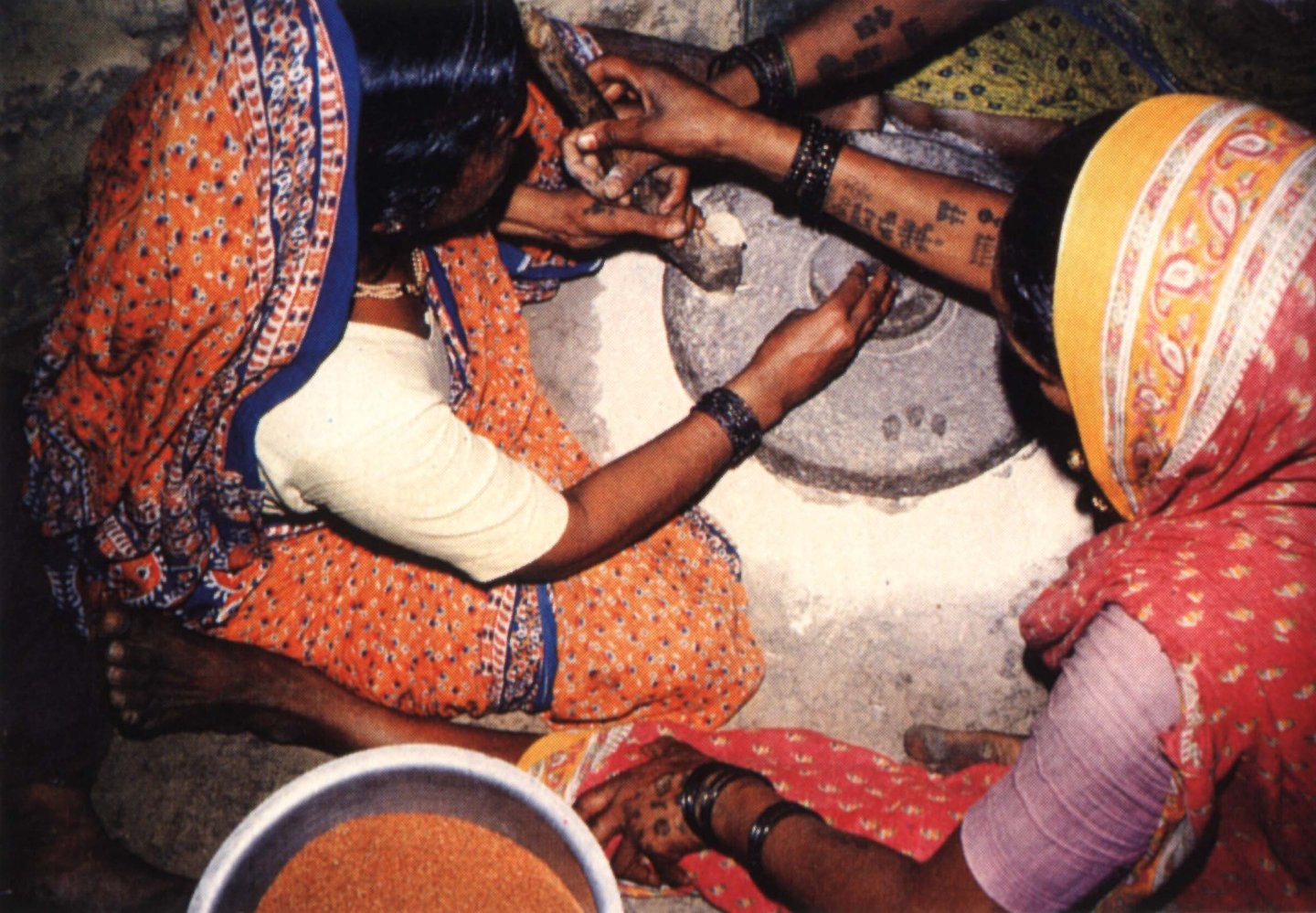 In the eight ovi here, four in each audio clip, Subhadra Umbre accompanies Yashoda in the singing.

Audio 1: In the first audio, Yashoda sings about the grinding to be done early in the morning so that the children can eat breakfast. She sings about waking up her son’s “queen” – her daughter-in-law.

At the hour of dawn, the rooster crows, my son’s queen wakes up
The queen awakens up from her sleep, she grinds a basket filled with one pāyalī

Note: Pāyalī is a traditional measure, slightly less than one kilo. It consists of four seers – 12 pāyalī make one mā ṇ , and one m ā ṇ is equal to 37 kilos.

A cart of twelve bullocks is used to go to my field
A basketful of ground flour, the little children’s breakfast

Audio 2: In the second audio clip Yashoda and Subhadra sing an ovi about a lazy woman who is angry at having to toil at the grindmill at dawn. Another ovi speaks of how it befits a mother and daughter to work at the grindmill together.

A lazy woman gets angry about grinding at dawn
My dear fortunate Usha, get up and start grinding!

Which king requires a basketful of ground flour?
In my son’s house, a gokul , people live happily

Note: Lord Krishna’s childhood was spent in a gokul , a community of cowherds who lived together in harmony.

In whose mansion that grinding, at dawn, at night?
Mother-daughter grind on the floor of a seven khan

Note: Kha ṇ is a unit of measurement in indigenous architecture – it is the distance between two wooden pillars, usually 4x5 or 10x12 feet. A house of seven khan would be  huge.

Note: At dawn, ascetics and other mendicants play on the flute, and ‘Abadula’ is used here to describe the sound of the flute (and not as the name ‘Abdul’); it may also be used to rhyme abadula-gabadula colloquially – signifying the singer’s term for the sound she is hearing. 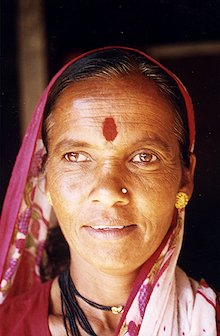