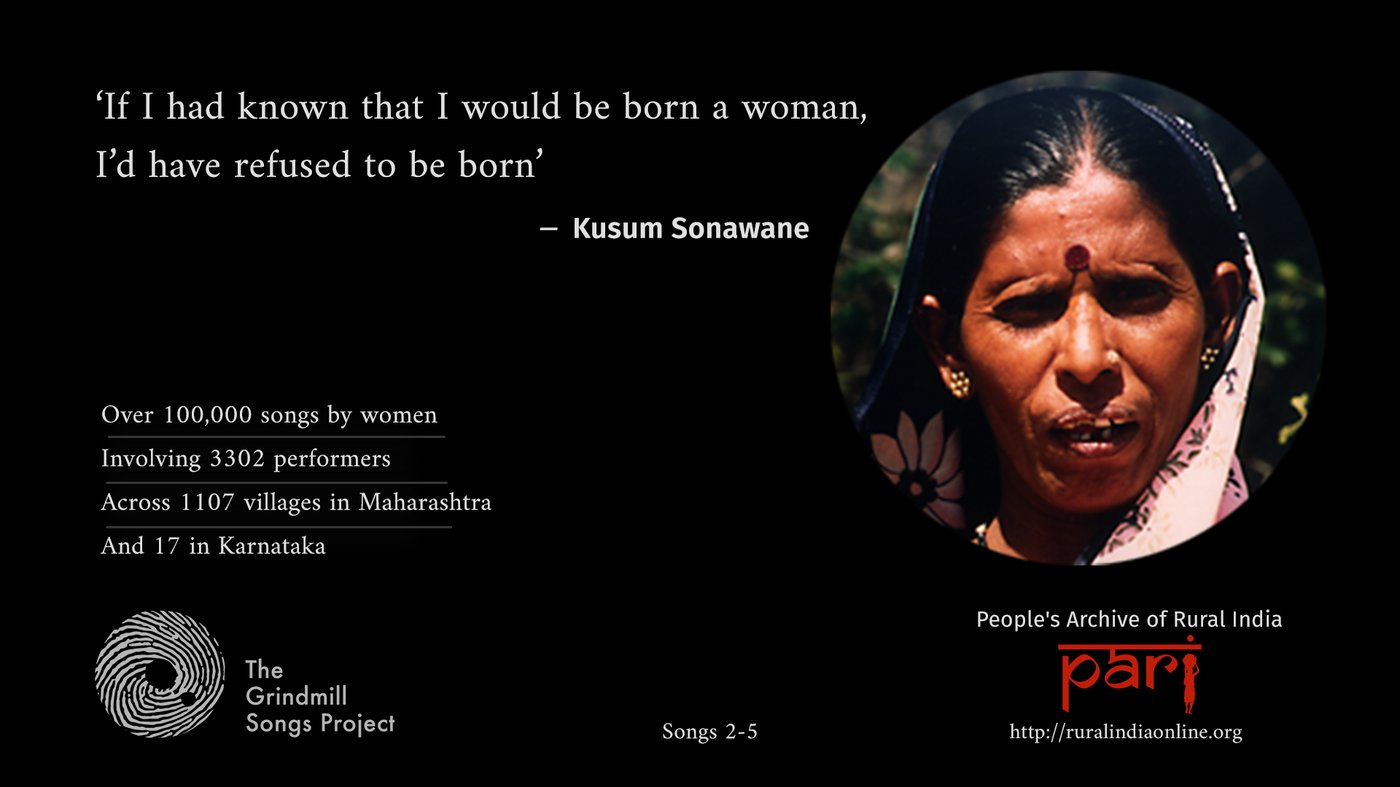 Burn, burn, youth, because a young woman is blamed...

Kusum Sonawane of Nandgaon village in Maharashtra sings about the oppression of women, of being weary about being treated badly, of the forced waste of a life when born female

Kusum Sonawane was born in a very poor family in Nandgaon village in Mulshi taluka , Pune district. She wanted to go to school but her mother did not allow it, and instead forced the girl to herd cattle. Her wish to attend school remained unfulfilled.

Kusum was married at the age of 12; her in-laws lived in Sathesai village, also in Mulshi. Her husband worked in a stone crushing unit in Mumbai. During a workers’ strike, he lost his job and returned to their village, where he worked as a labourer. In 1980, Kusum joined the Garib Dongri Sanghatana, an organisation working with the rural poor in the hilly tracts of the district.

In this audio, Kusum sings four songs ( ovi ), and also speaks about women’s social identity and her own reaction to the oppression and pressures she has regularly faced in a patriarchal society.

The clip starts with an introductory commentary by Kusum, followed by an ovi . The subsequent songs and commentary are sequenced here as they were recorded in the audio.

Kusum Sonawane: There are songs of that kind, yes. Because in a society where women are fed up of social pressures, of the husband’s oppression and the brother’s domination, when they are tired, they feel this life is unnecessary. They feel that this kind of life is of no use, it is unstable. When they sing, they bring the same sentiment to this ovi :

Burn, burn, youth, because a young woman is blamed,
even when she is merely standing.
A child is always blameless, childhood is the best.

So they say that childhood is fine, it is good. But when you come of age, at 18 years, this youth, let it burn, [we] don’t want it!

A child is blameless whatever she may do, the best happiness is during childhood
Let that youth be burnt where even to be seen standing when young is a fault.

Kusum's commentary: What happens is that a woman gets tired. She feels let this youth be destroyed, throw it in the fire and get rid of it.

Burn this youth, let my blossoming into a woman be burnt
My mother Gandhari gets the blame

Kusum's commentary: If a girl behaves badly, lives badly or is even treated badly by others, society blames the girl. They say she is so-and-so woman’s daughter. So it is her mother who is really at fault; her family is also at fault. But the mother is singled out for blame. So let this youth go, throw it in the fire and let it burn. Get rid of it.

Note: Gandhari, mother of the Kauravas in the Mahabharat , represents a woman who was blamed for her sons’ deeds even though she was a good wife and mother.

If I had known that I would be born a woman,
I would have refused to be born
I would have become a tulsi plant at god's doorstep.

Note: The singer implies that if she were a tulsi [holy basil] plant, she would have been revered and prayed to by people.

Which fool has given birth to a woman?
My body is toiling on rent in someone else’s house

Kusum's commentary: Had I known that I would be born a woman, I would never have been born. But this is a body. It was conceived, it grew and the body is then given away for drudgery, it keeps toiling on rent in someone else’s house. (The woman) is not valued. 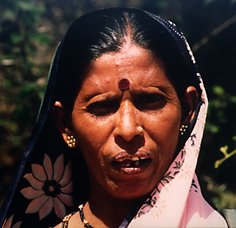 Date: These songs and the commentary were recorded on October 5, 1999.