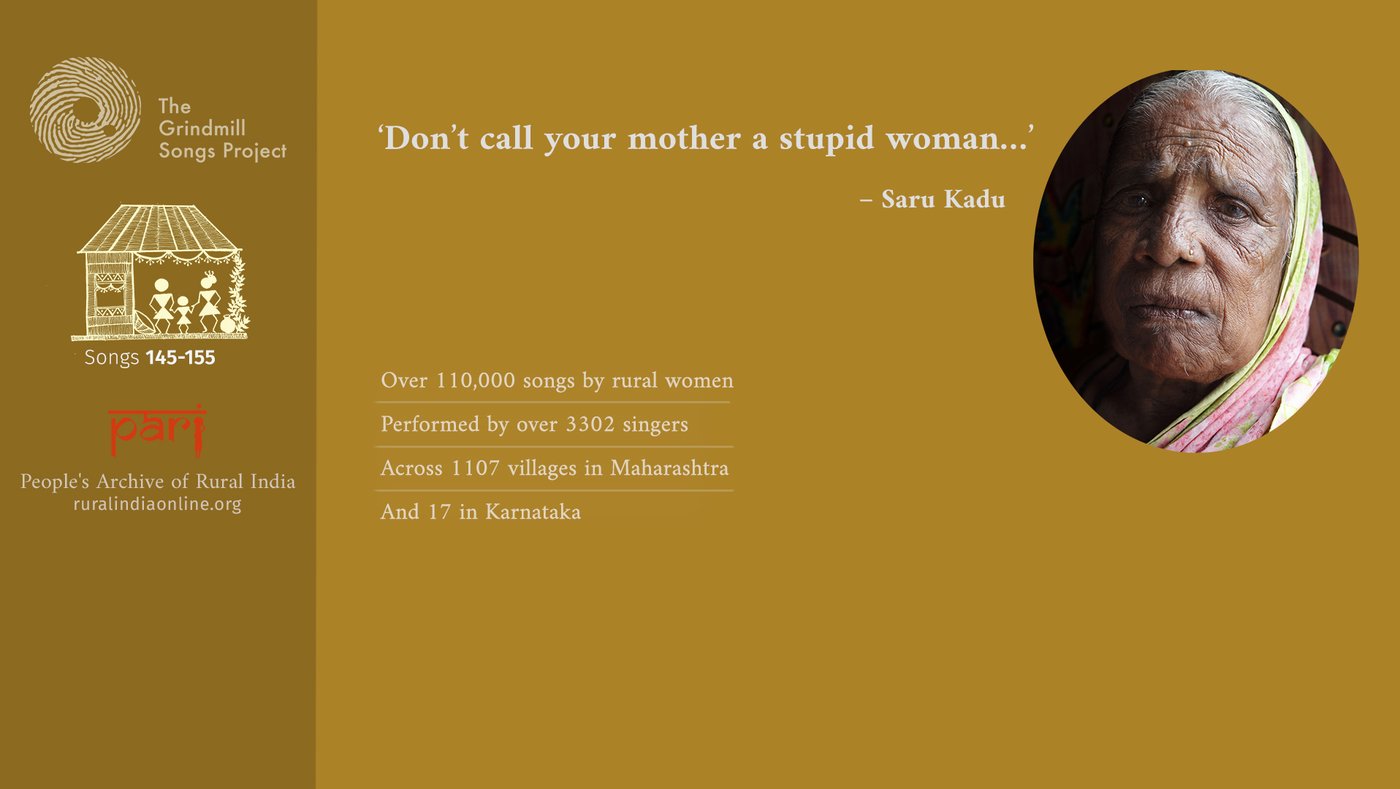 Singing the stories of her seven decades

Sarubai Kadu of Dapodi village in Pune district enriched the Grindmill Songs Project by singing more than 5,000 couplets, though her own life is penurious. In this second part of a two-part story, she sings 11 ovi that reflect her past joys and persistent sorrows

“Age has nothing to do with it. My mind is not at peace, my head is spoilt. That is why I cannot remember any songs,” says Sarubai Kadu. It is July 2017 and we have come to Dapodi village in Daund taluka looking for the most prolific contributor to the grindmill songs database. Sarubai sang 5027 couplets which the first Grindmill Songs Project team had noted in writing between 1996 and 2009.

At that time, she lived in Wadavali village in Mulshi taluka, Pune district. In 1993-94, many houses from this and other villages in Mulshi were submerged after the Warasgaon dam was constructed over the Mose river. Like many others, Sarubai’s family too had to abandon their home and move to resettlement sites in various villages and hamlets of Daund taluka, around 80 kilometres from Pune city.

When we meet Sarubai in Dapodi, she is sitting outside a hut, but takes us to a brick and cement house that belongs to her son Dilip. (We recorded her singing ovi – couplets sung by women working at the grindmill in rural Maharashtra – in the verandah of that house; see part one of this story Sarubai: 5000 songs and still singing ).

Sarubai's son Dilip has a concrete house (left), but after a recent family conflict Sarubai was asked to move to this nearby hut, where she now lives alone

“Life was comfortable in Wadavali,” Sarubai says. “Then the dam was built and everything changed for us.”  Families who had farms in Wadavali were promised land at the resettlement villages, but some received much less than they were entitled to. Others only got a small patch to build their home. Moreover, the land they got in Dapodi was fallow. “We had to start from the beginning,” says Dilip, “we had to make the land cultivable and even after that, what we earn from it meets only 25 per cent of our needs. For the remaining 75 per cent, we have to work as labourers or do other jobs.”

Dilip works as a mason, and his wife Chandrabhaga runs the small grocery shop they own. Sarubai tells us afterwards that she lived with him and her daughter-in-law until about a month ago. But after a recent family conflict, she is not allowed to live in the same house. 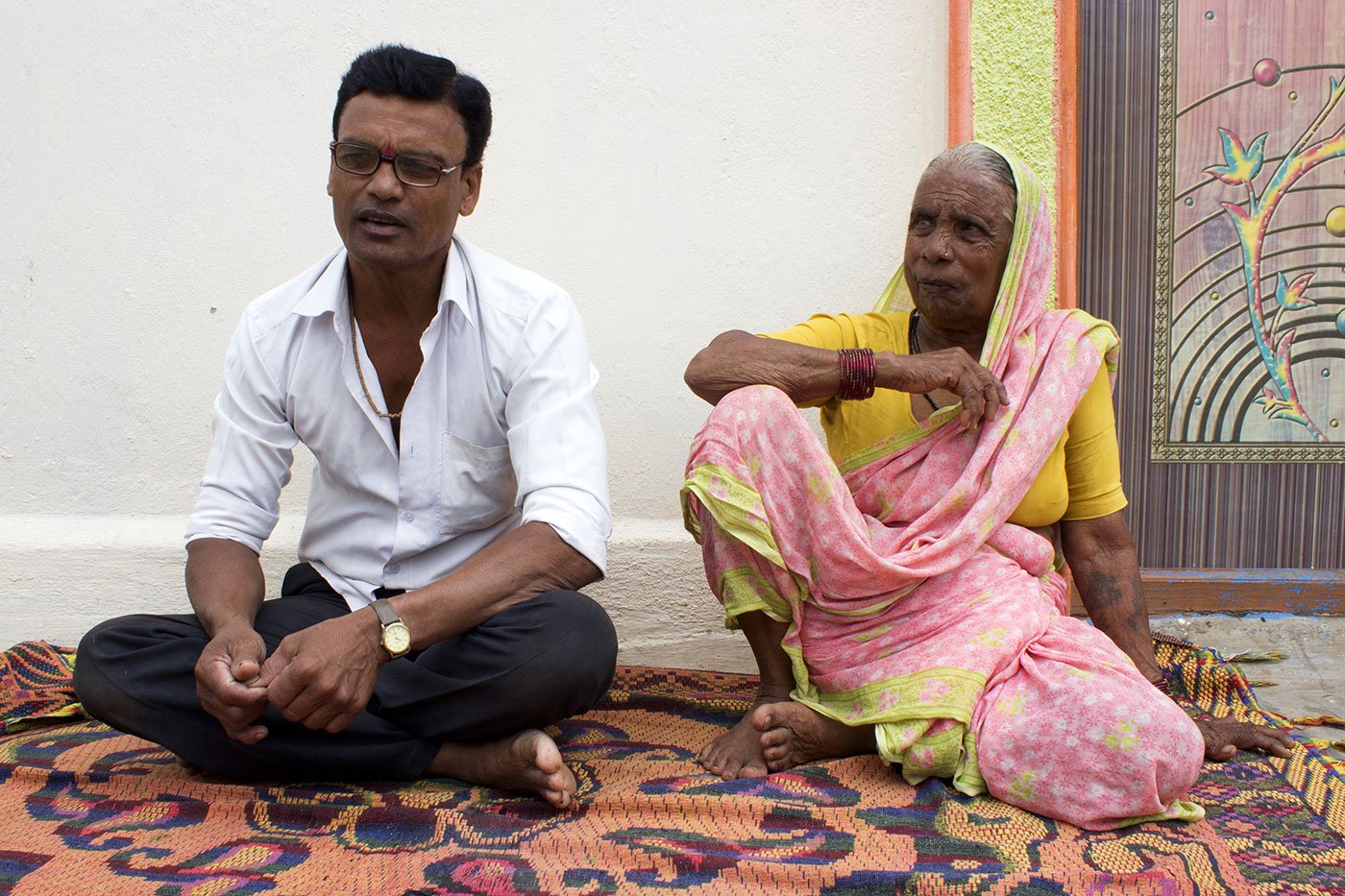 'Life was comfortable in Wadavali', Sarubai says, sitting with her son Dilip. 'Then the dam was built and everything changed for us'

Just minutes away from Dilip’s house is Sarubai’s present ‘home’ – the dilapidated hut made of bricks, wooden poles, mud walls and a tin roof. One door, no windows. The hut belonged to a deceased son, and is now owned by his son. This is where she lives now, alone. At the entrance is the bottom half of a grindmill; the top half rests precariously on a ledge inside.

Sarubai enriched the Grindmill Songs Project  by singing over 5,000 songs for it more than 20 years ago; her own life though is penurious. Even at the age of 70, she works as an agricultural labourer, weeding in the fields for a daily wage of Rs. 150. Her husband, Maruti Kadu, died in 2015. Of her four sons, only two are living.

Sarubai has lived and is living some of the songs she created. The ovi featured here echo some of her own experiences – joyous occasions like her sons’ weddings as well as sad moments like family conflicts. But recollecting these couplets is not easy for her. “If I can remember the one main word from an ovi, I will get the rest. In the old days, there were so many songs stuck in my head and they would gush out… like water.” 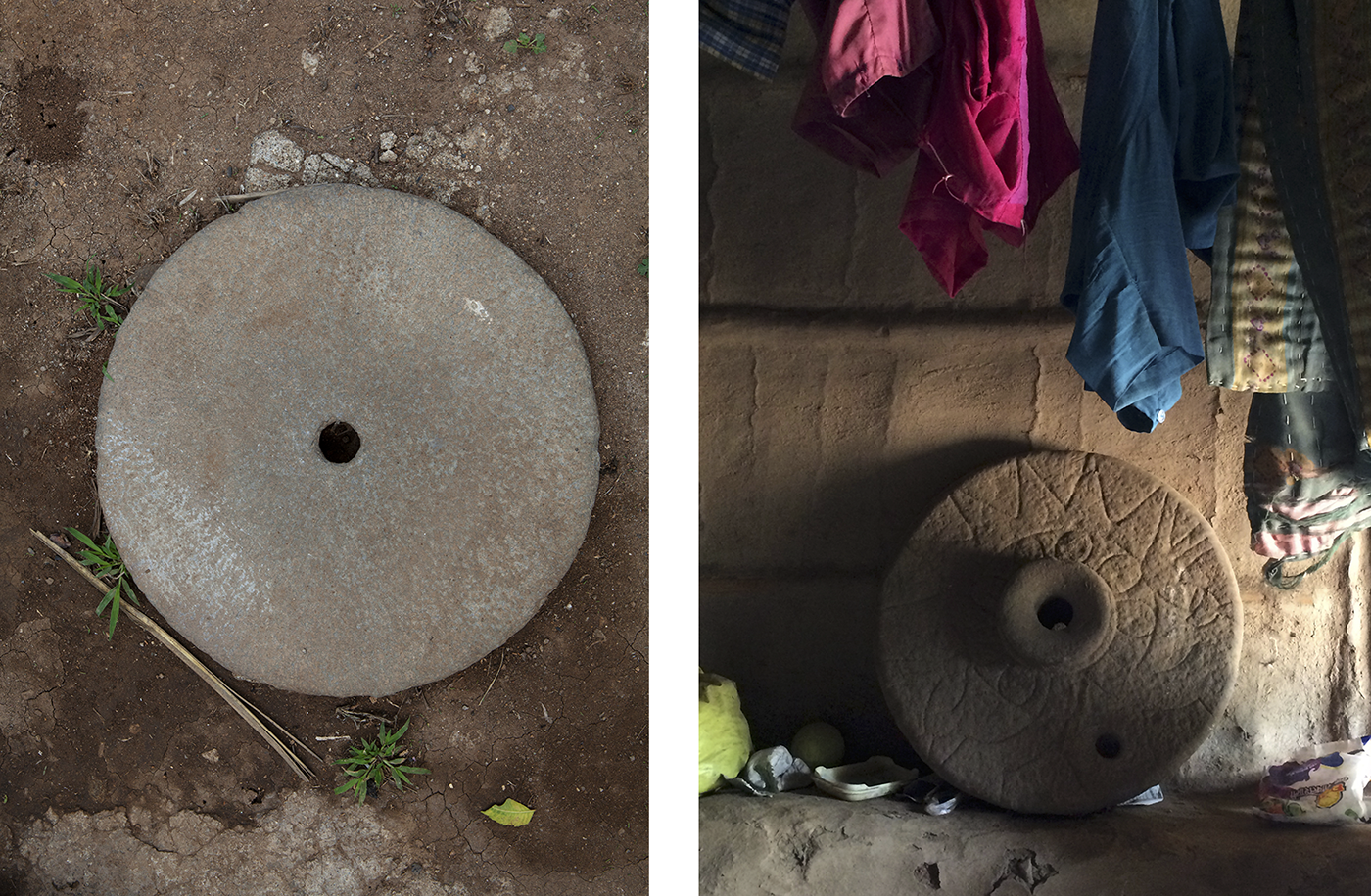 She rubs her temples with her fingers, her eyes focus on a spot in the air as if trying to search for the lost words.  And when they come back, her face lights up. We start recording – in the video featured here, Sarubai sings 11 couplets.

The first three ovi are about how an adult son treats his mother when she is old, and remind him of the physical pain and distress that she went through at the time of the son’s birth.

Sarubai tells him, in the song, to not call his mother a stupid fool or a selfish woman, for it was difficult to break the umbilical cord at birth. And where was the son’s wife at the time of his birth?

The next four ovi are about a brother and sister who are close like two oranges from one tree. But when an outsider – the brother’s wife – comes into the family, she creates a rift between the siblings. When they walk on the street, a stranger they encounter may misbehave, and the mother tells the daughter to take a detour and avoid him. Even when a brother and sister walk together on a village street, their mother worries that people have a tendency to comment and waits for them to return home. 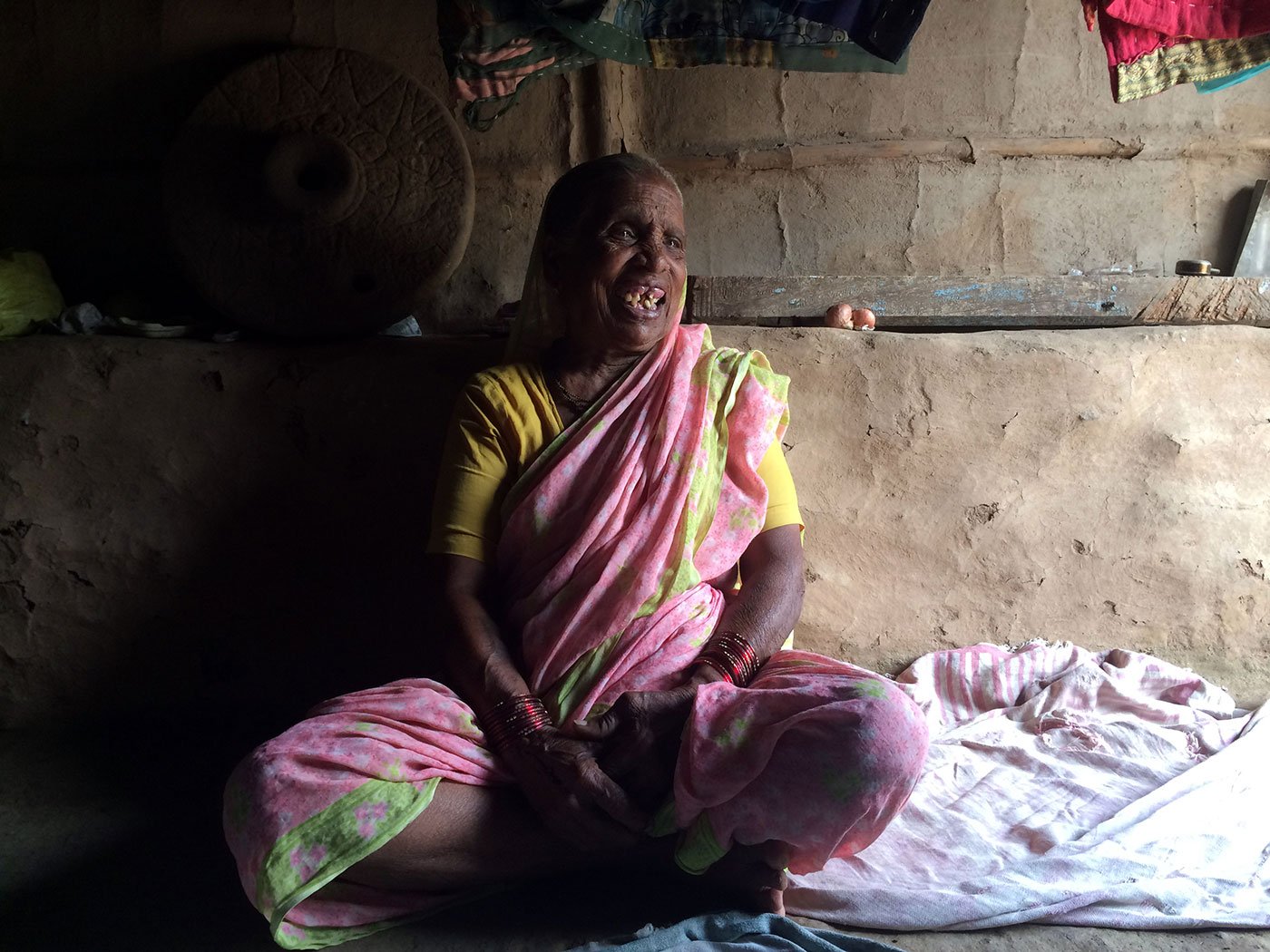 When asked if she has left tobacco, Sarubai says, laughing, 'I’ve really left it'

Then four couplets that follow are about a son’s wedding and his bride. An areca nut is tied to ‘God Grindmill’ (symbolising the beginning of an auspicious event) and haldi (turmeric) crushed on the grindmill is applied to the bridegroom. At the entrance of the wedding pandal, the mother tells her dear son, precious as a diamond, that her saree pleats are yellow with the turmeric from the haldi ceremony. The daughter-in-law is the singer’s niece and it is difficult to ask her to do the chores. Only small tasks like adding culture to the milk to make curds can be asked of such a woman, and it is better if the son marries someone from outside the family.

Watch video: 'A stranger may misbehave on the street, I tell you O daughter, take a detour', sings Sarubai

When Sarubai stops singing, Jitendra Maid, a member of the original Grindmill Songs Project team who is travelling with the PARI team, asks her if she has given up chewing tobacco. She nods in affirmation. “Really?” he asks, surprised. “I’ve really left it,” she says, and her laughter reaches her eyes, wiping off her worries for a moment.

Don’t call your mother a stupid mother
At the time of your birth, her life was in danger

Don’t call your mother “stupid woman, stupid woman”
At the time of your birth, the umbilical cord was difficult to cut

Don’t call your mother a selfish foolish woman
At the time of your birth, where was your wife

Brother and sister are like oranges from the same tree
She [sister-in-law] came from another family, and caused the rift

A stranger may misbehave on the street
I tell you O daughter, take a detour [and avoid such a man]

An affectionate sister and brother walk together
Our mother, dear brother, awaits us both

God Grindmill, I tie an areca nut to you
Haldi [turmeric] is applied to my son, the bridegroom

At the entrance of the marriage pandal
The pleats of my sari have become yellow with haldi
My dear son, my diamond, let them apply haldi to you

I make my niece my daughter-in-law, difficult to ask her to work
I tell you, woman, better [for son] to marry a girl from outside the family

I make my brother my vyahi*, I make my niece my daughter-in-law
I give her small jobs to do, I tell her to culture milk to make curds 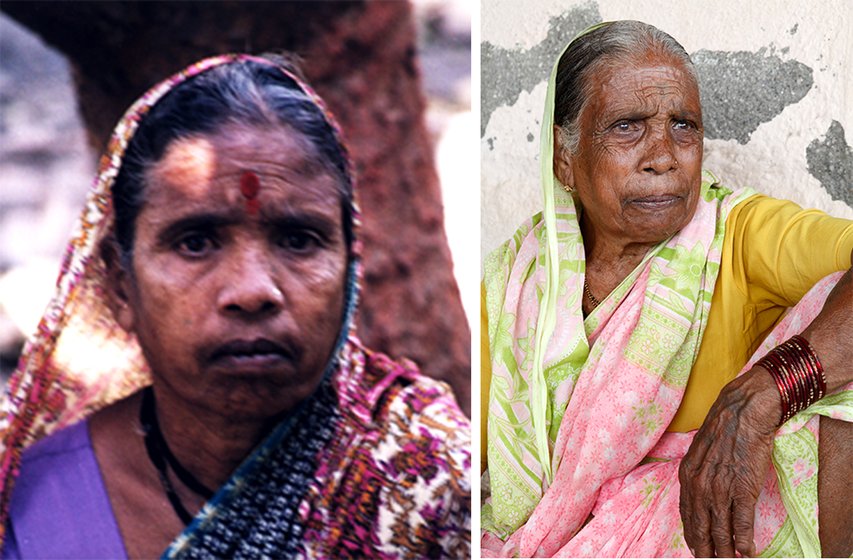