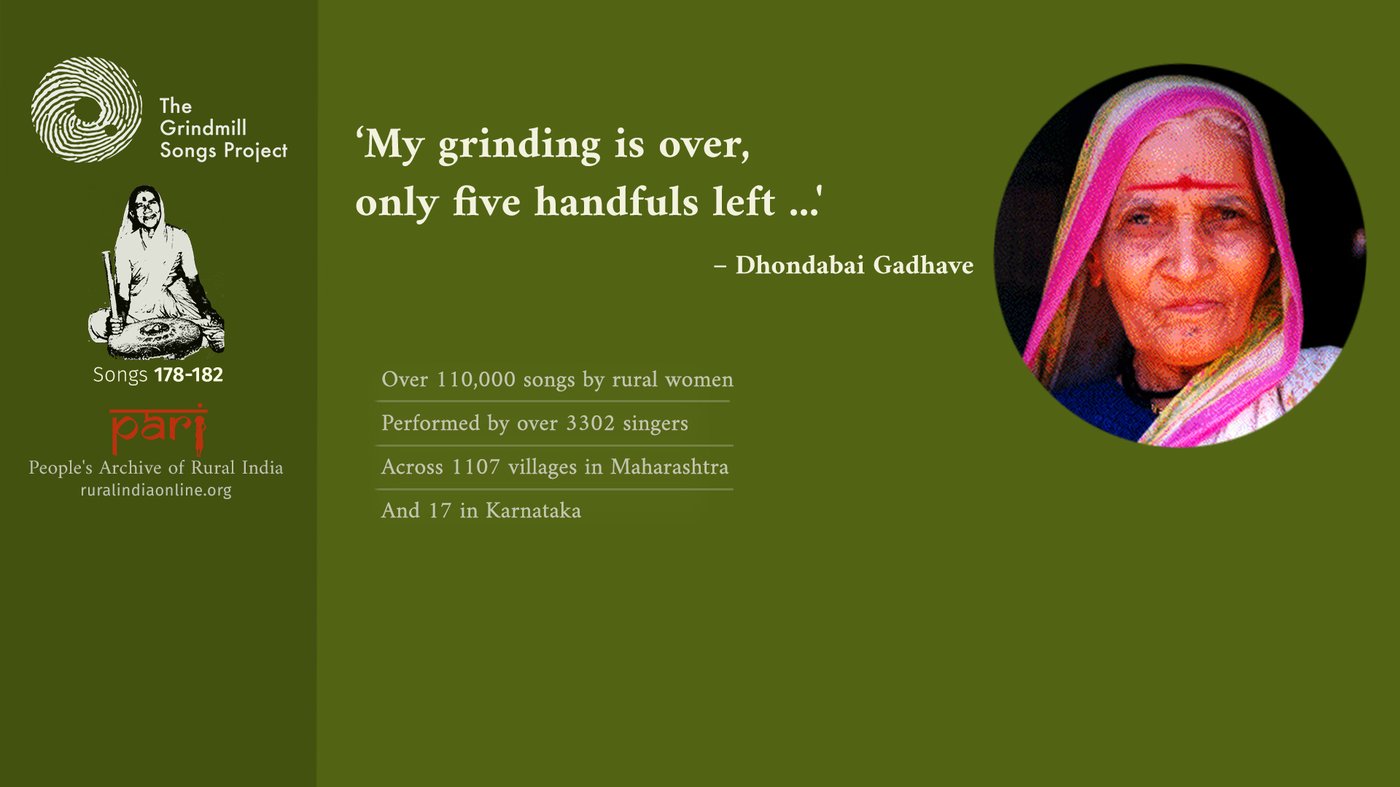 When the daily grind is done

In this edition of the Grindmill Songs Project, Dhondabai and Anjanabai Gadhave of Savindane village sing of the relief they feel when they are done crushing grain into flour at the mill. The gods and goddesses, they say, help them through the hard labour

Sant Janabai, a 12th century Bhakti poet, stands tall in a small shrine outside the Gadhave family home. Fakira Gadhave, who belonged to a community of potters, had sculpted this statue when he was alive. Fakira would work at the potter’s wheel, while his wife Dhondabai would mix clay, ready the chul (kiln) for firing the pots, and when those were made, storing them carefully to avoid damage. When they weren’t making pots, the couple worked as agricultural labourers.

Like many women of her generation, Dhondabai would crush grain into flour at the grindmill in her home, sometimes with her daughter-in-law Anjanabai. Together, they’d sing ovi to lighten the load of this daily labour. 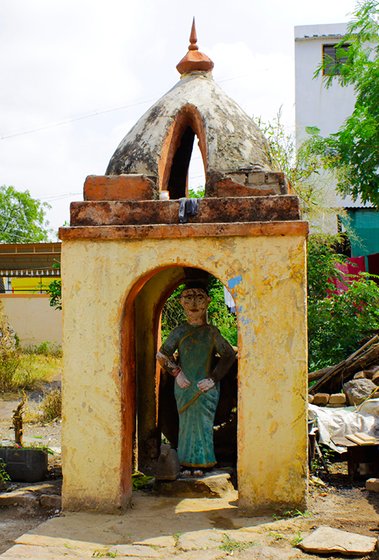 A shrine for Sant Janabai outside the Gadhave family home

Dhonadbai and Anjanabai were among the 15 women from Savindane village in Shirur taluka , who contributed 344 ovi to the grindmill songs database . The team that documented these songs wrote them down and recorded about 250 of them on audiotapes in December 1995.

Jitendra Maid, who was a part of this original team, is also an integral part of the PARI Grindmill Songs Project . We travel to the villages of Maharashtra to meet the grindmill singers and photograph them. On October 8, 2017, we went to Savindane but discovered to our dismay that Dhondabai had passed away in 2008. We were only able to meet Dhondabai’s  daugther-in-law Anjanabai that day, and photograph her and her home.

In the grindmill songs database, we found five ovi sung by Dhondabai and Anjanabai. Dhondabai takes the lead in these songs while her daughter-in-law accompanies her. They sing of the hard labour of crushing grain into flour at the mill and the relief they experience when the grinding is done.

The first line of each couplet begins with ‘the grinding is over’ and the second, which rhymes with the first, evokes images, people, and Hindu gods and goddesses. In the first couplet, they say that when the grinding is over, there are only fragments in the winnow. They recall Lord Vitthal’s tura or plume; he is Rukmini’s bijavara or ‘man with two wives’. (Vitthal, who is also Lord Krishna, is married to Rukmini and Satyabhama.) There is rhyme here – charachura, tura, and bijavara – and repetition, and in each couplet, ‘the grinding is over’ is juxtaposed with a beautiful image. 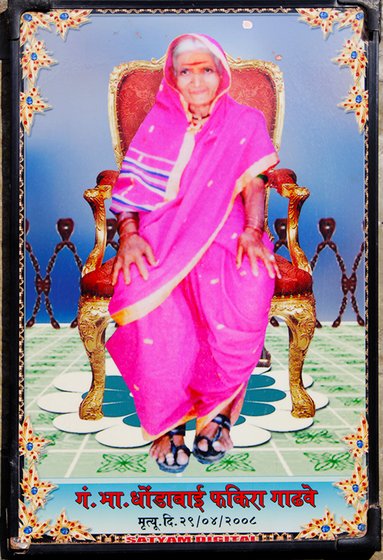 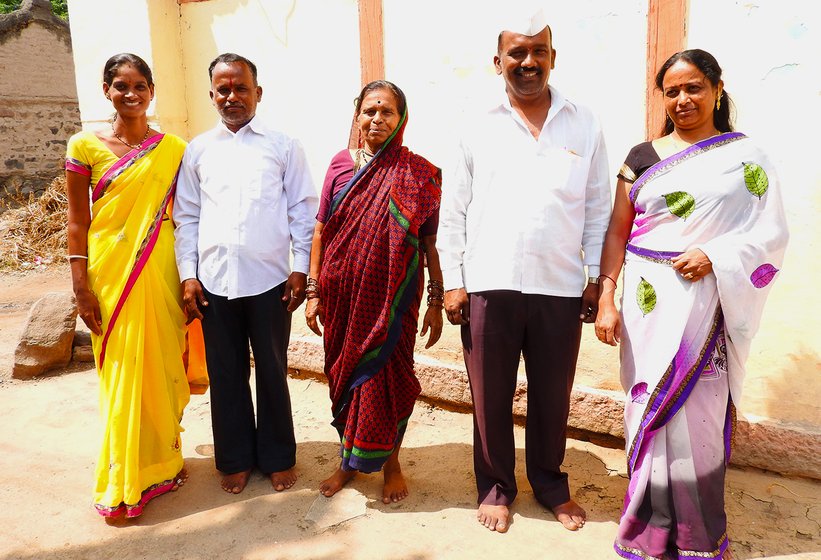 In the next two ovi , Dhondabai sings of Sita – in the second, of a young Sita in Ram’s garden and in the third, of a Sita who sits with her at the mill and helps her with the grinding. In the fourth couplet, Dhondabai says that God has given her nephews, but they are her ‘husband’s assets’, implying that they help but only with his work. In the last ovi , Dhondabai asks, ‘Who’s standing there?’ and answers that it is goddess Parvati, who is at the mill, helping her.

Thus the singers bring the personae of Hindu mythology into their midst, and lighten the load of their daily toil. Singing these ovi probably helped the women make their work pleasurable. And the clinking of their bangles, mixed with the sound of stone crushing grain, is music to our ears.

The grinding is over; in this winnow, only fragments remain
The plume of Vitthal, Rukhminbai’s husband who has two wives

The grinding is over, only remnants in my winnow
The young Sita was there in Ram’s garden

The grinding is over; who performed the aarti at the end?
Ram’s Sita joined me at the mill, then went away

My grinding is over, only five handfuls left
God gave me nephews, my husband’s assets

The grinding is over; who was standing here?
Shankar’s Parvati helped me, then went away 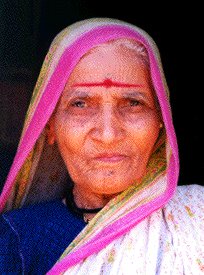 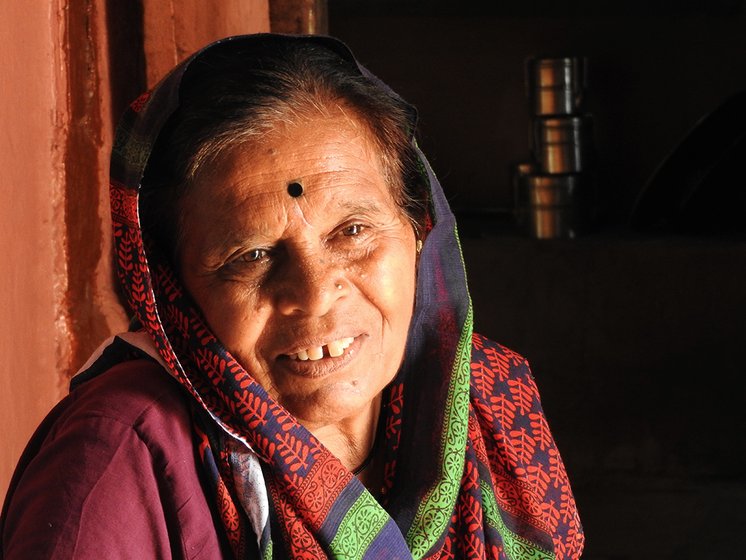