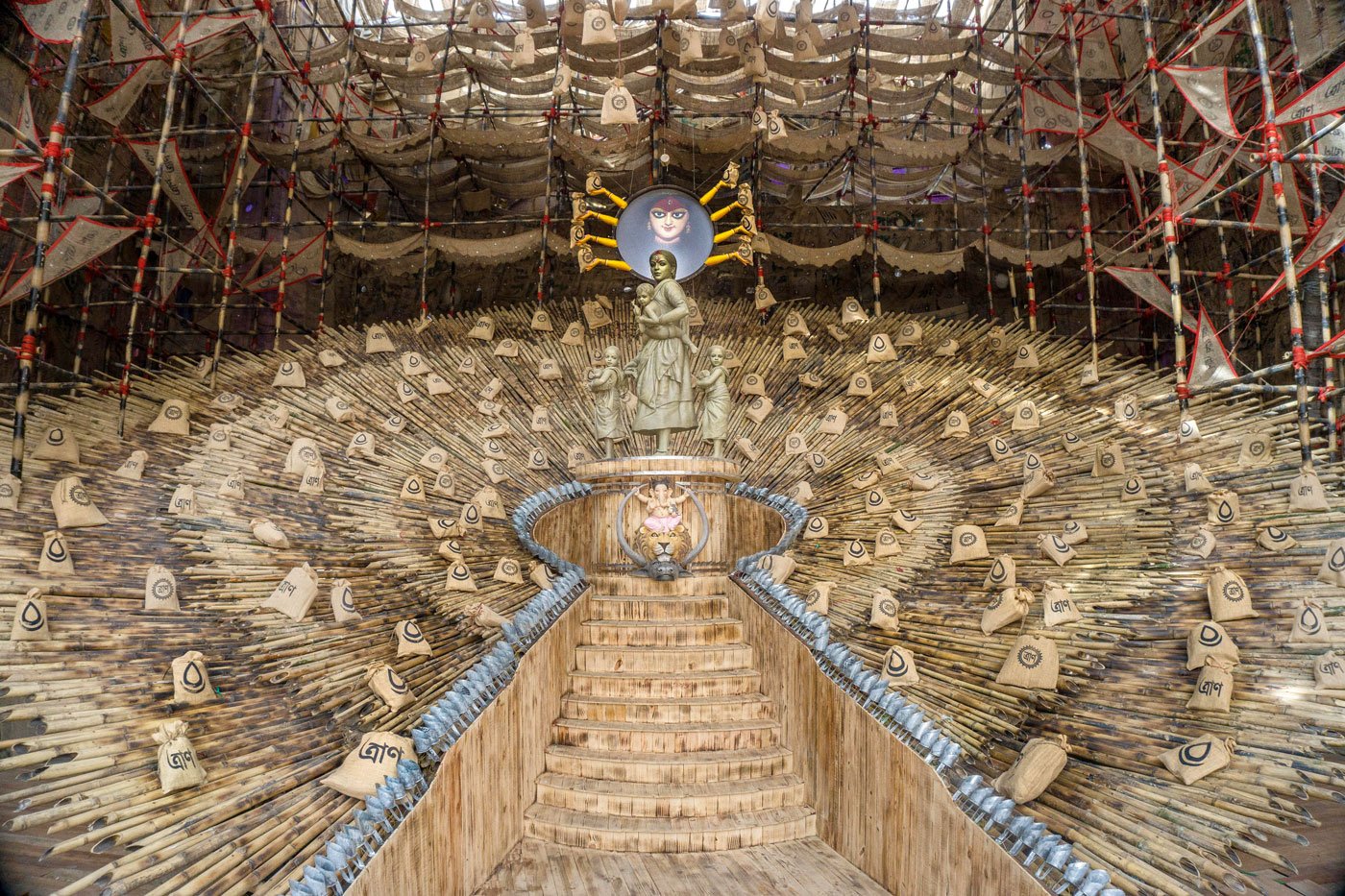 A Durga Puja pandal in Behala, Kolkata, has the goddess in a unique avatar

“That mother walking night after night with her four children – she is Maa Durga to me.”

Meet Rintu Das, the artist who drew up – literally – an idol of the Goddess Durga as a migrant worker. It’s a standout sculpture in the Durga Puja pandal of the Barisha Club, Behala, in south-west Kolkata. Durga has other deities as migrant labourers for company – Saraswati, Lakshmi, Ganesha and more. The whole show is a tribute to the struggles of migrants amidst the coronavirus pandemic.

The lockdown period had Rintu Das, 46, feeling he was “under house arrest for the past six months.” And, he says, “I have seen death as soon as I turned on the television screen, so many people were affected. So many, walking day after day, night after night. Sometimes getting not even a little food, or a little water. Mothers, girls, are all walking. That’s when I thought if I worship this year, I will worship for the people. I will honour those mothers.” And so, Maa Durga as migrant labourer mother.

“The original ideas were something else,” Pallab Bhowmik, 41, who sculpted the idol on Rintu Das’ plans, told PARI from his home in West Bengal’s Nadia district. Even before the fanfare of the 2019 Durga Puja had ended “the Barisha Club organisers had already begun preparing for this year’s puja . But then the Covid-19 pandemic made it clear that 2020 would be different – so the club had to abort the old plans.” And the new ones were woven around the lockdown and labour distress. 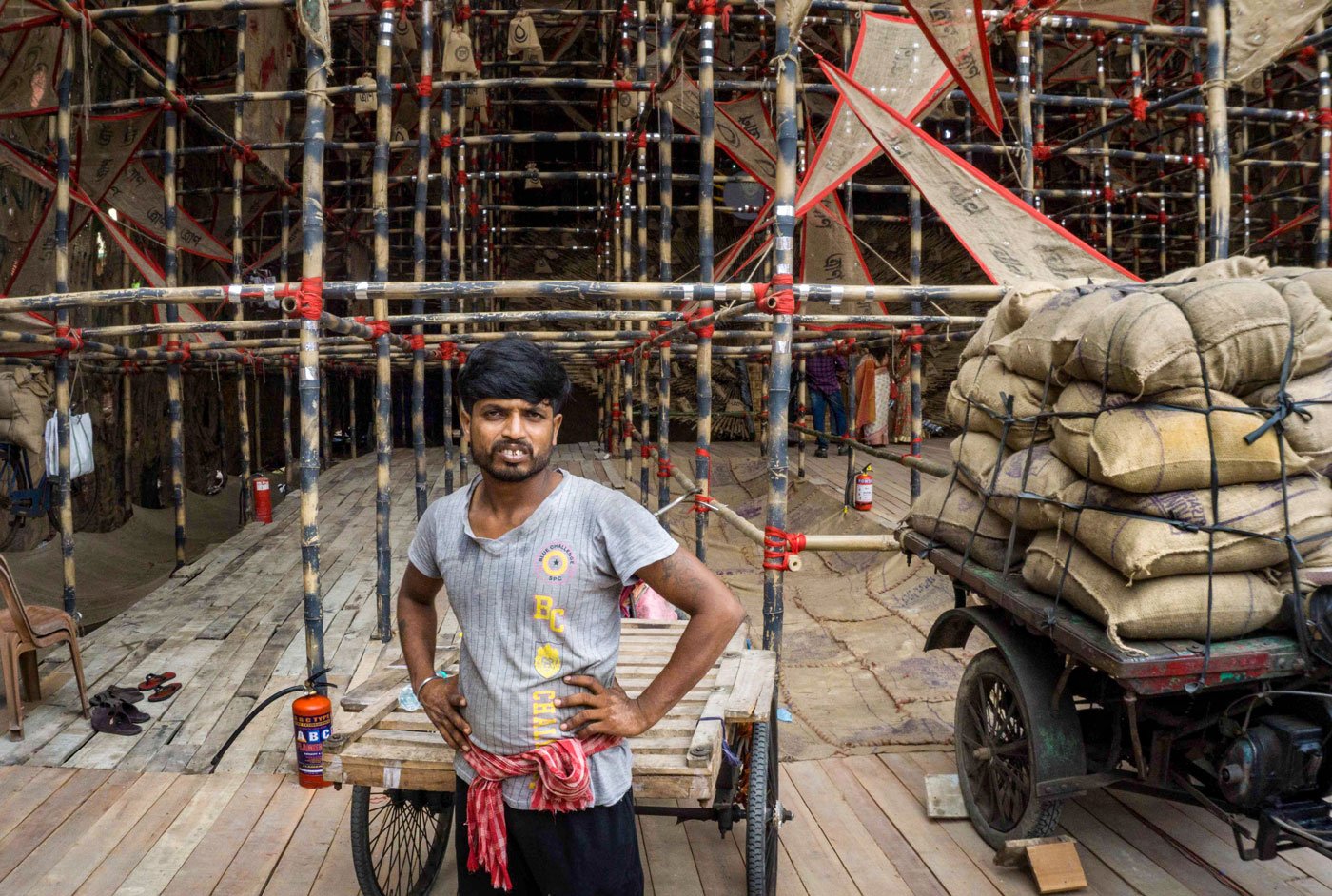 This worker in Behala said he identified with the Durga-as-migrant theme, finding it to be about people like himself

“While I created the idols of Maa Durga with her children and Mahishasura,” says Bhowmik, “other artisans worked on various aspects of the pandal – under the supervision of Rintu Das, art director for the Barisha Club’s puja .” With the economic situation deteriorating across the country, all puja committees were affected. “Barisha Club too had to slash its budget by half. Since it was not possible to hold on to the original theme, Rintu da came up with this idea of Durga as a migrant mother. We discussed it and I started sculpting the murti . I would say this pandal is the fruit of teamwork.”

The circumstances, says Bhowmik “made me create a Durga suffering along with her hungry children.” Like Das, he had seen numerous “images of impoverished mothers with their kids” making those long walks to their homes in the villages. As an artist based in a rural town, he also could not forget the struggles of the mothers he had seen around him. “It took almost three months of work to complete this in my hometown of Krishnanagar in Nadia district. From there it went to the Barisha Club,” says Bhowmik who, while studying at Government Arts College, Kolkata, was greatly influenced by the work of famous artist Bikash Bhattacharjee, whose painting Darpamayee inspired his conception of Durga.

The pandal ’s theme has won wide appreciation from the public. “This pandal is about us,” one worker told me, before disappearing into the back alleys. There have been the inevitable trolls on the net, condemning the portrayal of Durga in a migrant avatar . But, says an organising committee spokesperson, “This goddess is a mother to everyone.”

And, says Pallab Bhowmik to those who criticise this portrayal: “The sculptors, idol-makers and artists of Bengal have always imagined Durga as the women they see around them.”

Thanks to Smita Khator and Sinchita Maji for their help with this story.