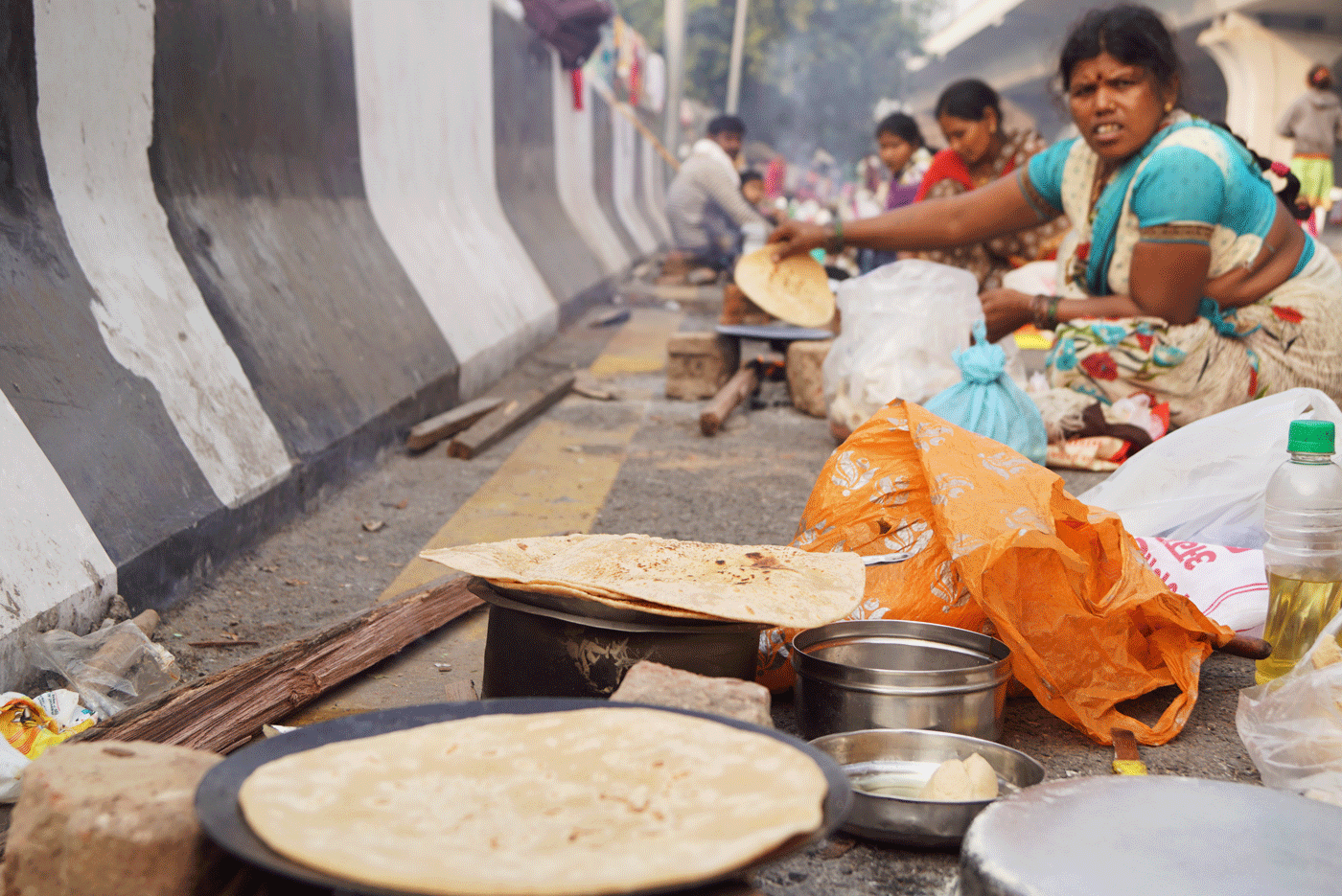 Living on the streets, looking for work

On the cold winter streets of the country's capital, seasonal migrants from Chhattisgarh, Maharashtra and other states set up temporary 'homes' and try and find work at construction sites and other places

On November 30, 2018, I was at Nizamuddin Railway Station in Delhi to speak to farmers who had arrived in the capital to participate in the Kisan Mukti Morcha . I saw a group of men, women and children in the distance, leaving the terminus with jute sacks on their heads and smaller bags on their shoulders.

I thought they were farmers who had come to participate in the rally. Then I realised that they were labourers from Chhattisgarh who had come here looking for work. “We are going to work at the Jindal power bhatta [plant] in Haryana,” said Itwara Jolhe, 27, from Chhote Mudpar village in Kharsia tehsil of Raigarh district. Her husband Shankar added that it’s somewhere near the border with Delhi but he couldn’t say exactly where.

Itwara, Shankar and the two families with them look for work either at the power plant or the brick kilns nearby. The couple said they had been migrating to Delhi-Haryana to work for three years. This time, they made the journey after voting in the Chhattisgarh assembly elections on November 20. 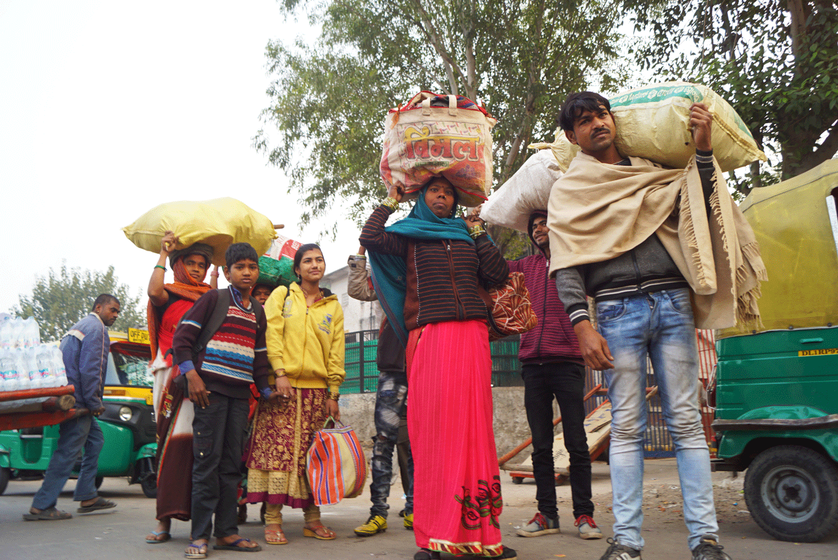 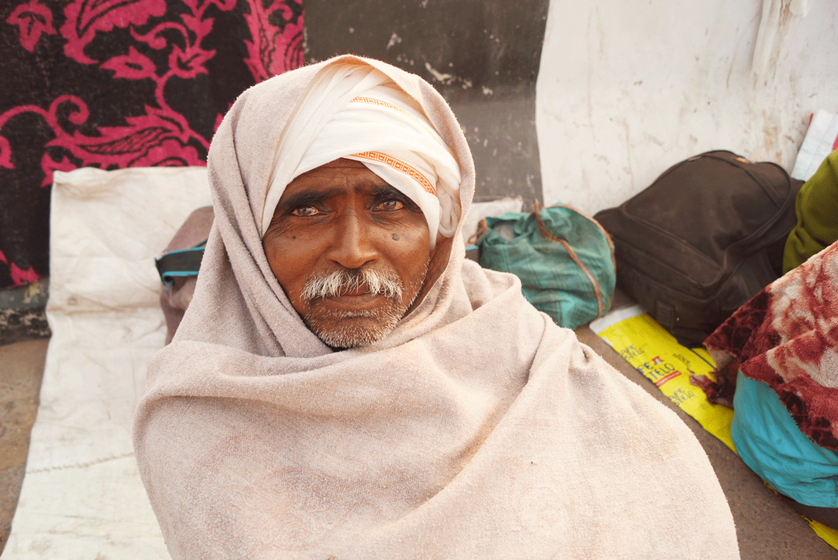 Left: Itwara Jolhe and her husband Shankar, from Raigarh district, were hoping to find work as labourers in a power plant. Right: Entire families of migrants, young and old, look for work and stay on the streets

They are from a Scheduled Caste community called the Satnami. “We are landless labourers. We work for daily wages in the fields of farmers till harvesting time [earning around Rs. 150 a day]. After that, we leave the village to go work outside,” said Shankar.

Also in the group were Ajay and Divya Dharia from Gonda village in Sarangarh tehsil of Raigarh district. Ajay had been coming to work at the brick kilns for the last few years but Divya, who he married two years ago, was accompanying him for the first time. 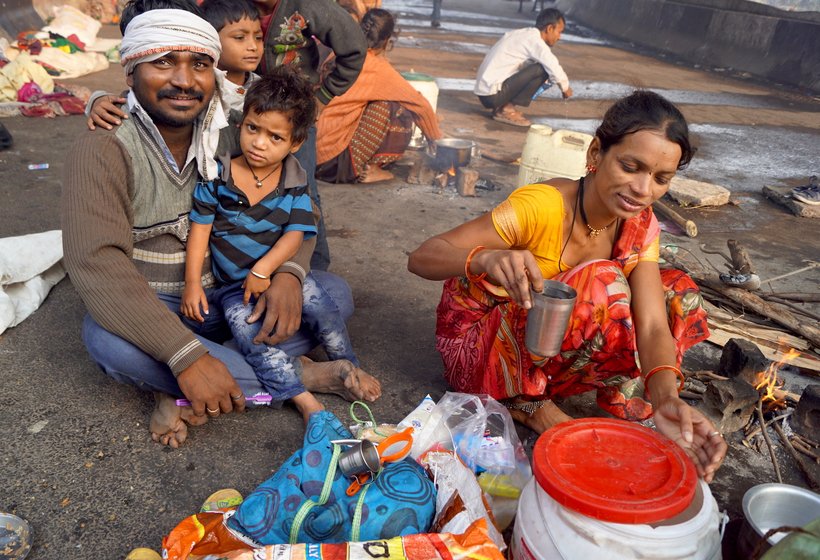 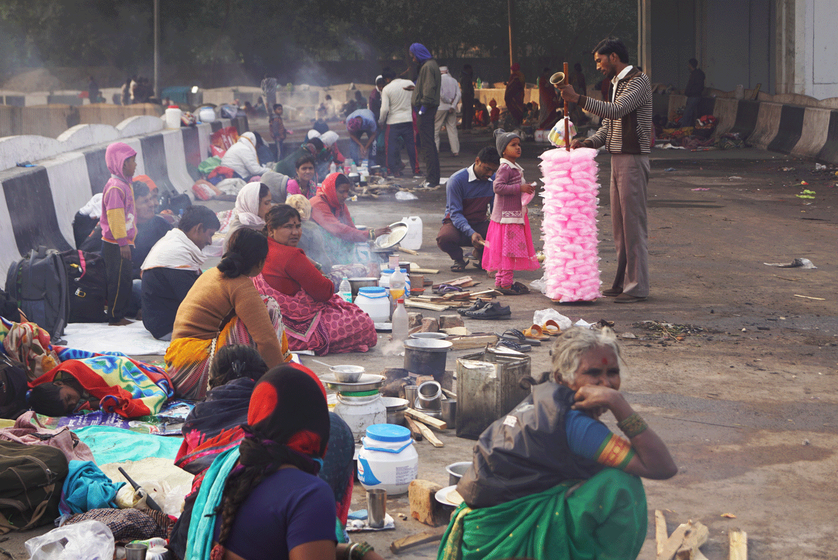 Left: Rajendra Shinde of Jalgaon district of Maharashtra and his wife Sonali, are landless labourers. With their kids and other families, they had come to Delhi due to the drought back home

Later, on an overbridge, I noticed a group of around 50 families by the side of the road. Since it was morning, the women were busy in making roti s for their families. “There is drought in our region and we have no work in the fields so we are here in search of work,” said Parvati from Akola district in Maharashtra. “We are here for the last few days and are looking for construction work in the city.”

Are you going to live here, on this over bridge, I asked.  “No, we stay at the site where we will get work,” she replied.

Next, I met Subhas Babandore of Malegaon taluka in Nashik district of Maharashtra.  “We have two acres of land but there is a drought in our area. We are here with family for the last 10-12 days and are looking for work,” said Subhash. Have you ever been to Delhi, I asked. “Never. We have come here for the first time.” 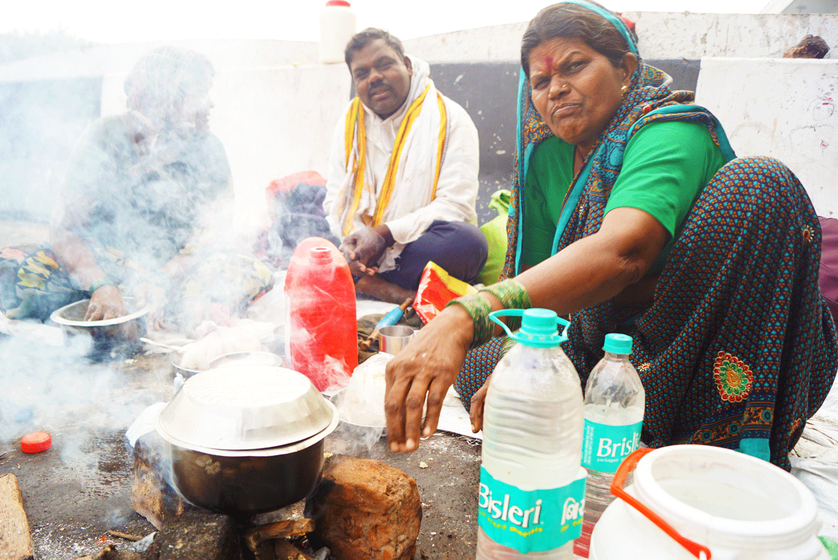 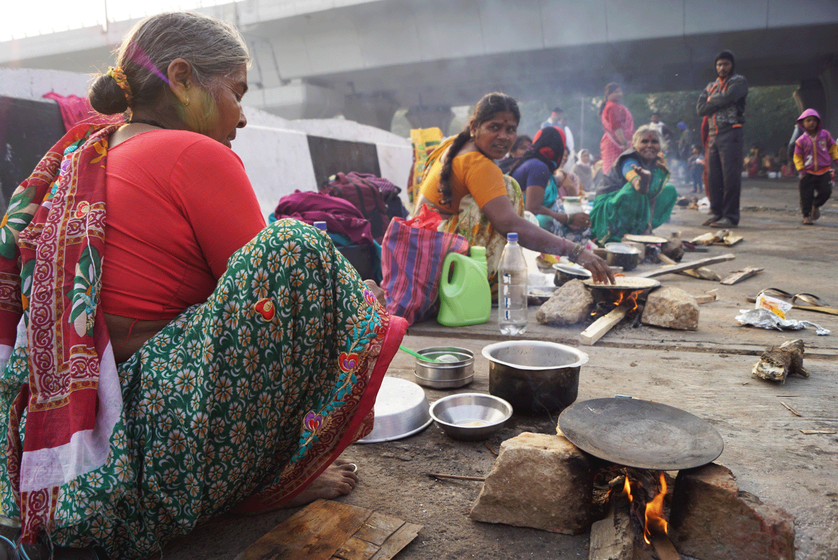 'Earlier, we would migrate to Mumbai, but for the first time we have come to Delhi hoping for better options,' said Laxmibai Kharat (left) who had come to Delhi along with others from Maharashtra

I tried to talk to Laxmibai Kharat, who was sitting next to Subhash. Like many of the migrant labourers here, she, too, did not speak Hindi so her co-villager helped me interact with her in Marathi. “Earlier, we would migrate to Mumbai, but for the first time we have come to Delhi hoping for better options,” said Laxmibai.

I also spoke to Rajendra Shinde of Bhusawal taluka in Jalgaon district of Maharashtra. Rajendra and his wife Sonali are landless labourers too; they had come to Delhi due to the drought back home. While talking, Rajendra beamed at his wife, Sonali smiled shyly back at her husband. I thought it best to leave them at this point, to their loving glances at each other in a harsh and alien city.