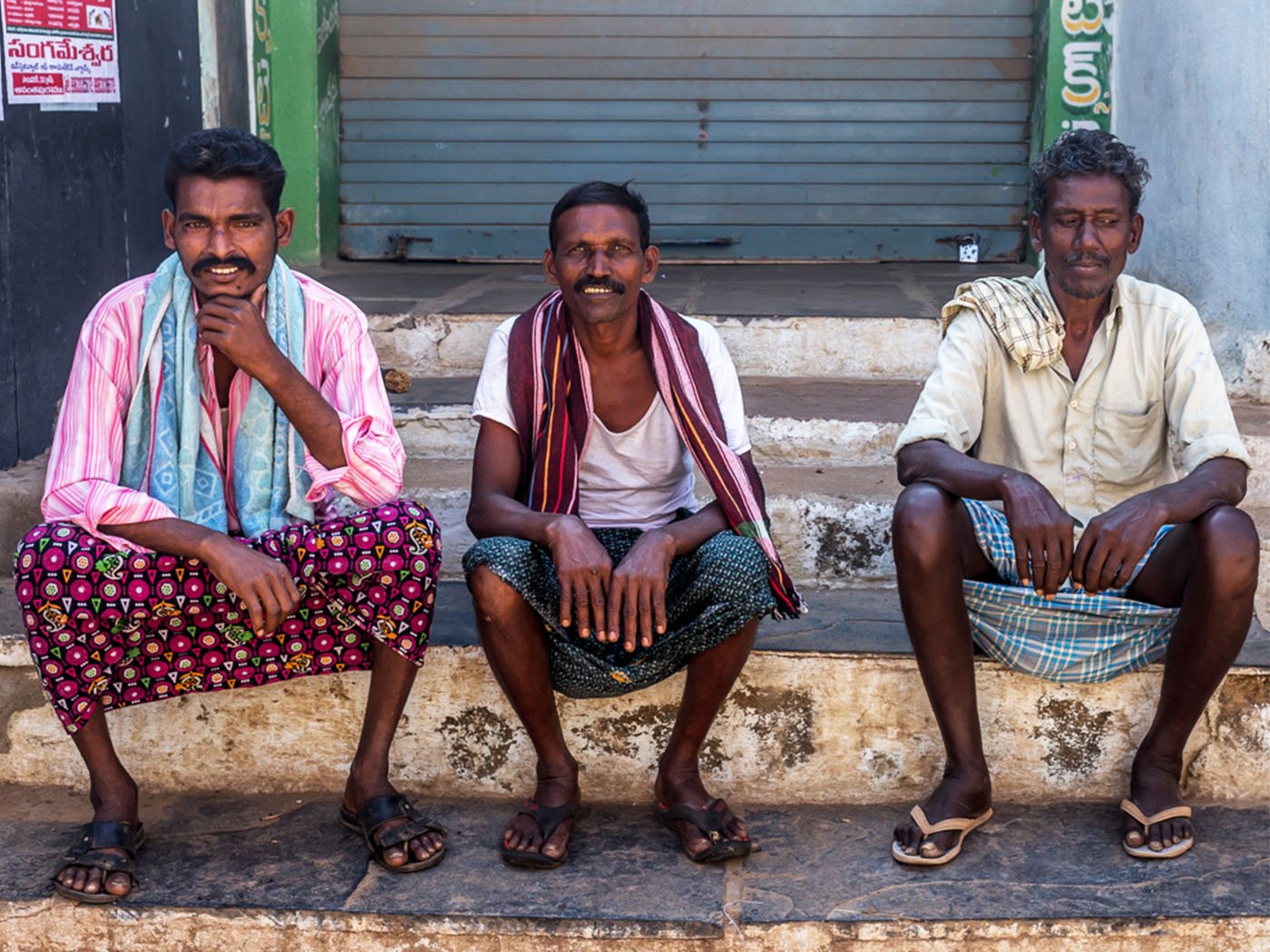 Because the fertiliser shop in Tadimarri village of Anantapur district in Andhra Pradesh accepts old notes, even drought-hit groundnut farmers are queuing up to clear their credit – while jobless agricultural labourers are finding that the easiest way to change their few old notes is by buying alcohol at the local liquor stores

“A farmer’s 500 rupee note is always soiled and fading. Or it is at least folded,” says P. Umesh, who sells fertilisers in drought-affected Tadimarri mandal of Anantapur district in Andhra Pradesh.

Until recently, Umesh had almost never seen a crisp new Rs. 500 with his customers – farmers who purchase seeds and fertilisers from his shop in Tadimarri village. So he was alarmed when, on November 23, a farmer proffered four good-looking 500 rupee notes for past fertiliser purchases. The notes were printed in 2014.

“If they were in circulation for two years, it’s impossible for them to look this new,” he surmised. Umesh’s first guess was that they were fakes. Although fake notes in Tadimarri were rare before the November 8 demonetisation, he had spotted a few given by the people who frequent his shop. So Umesh put these brand new notes to test in his money-counter. They weren’t fakes. 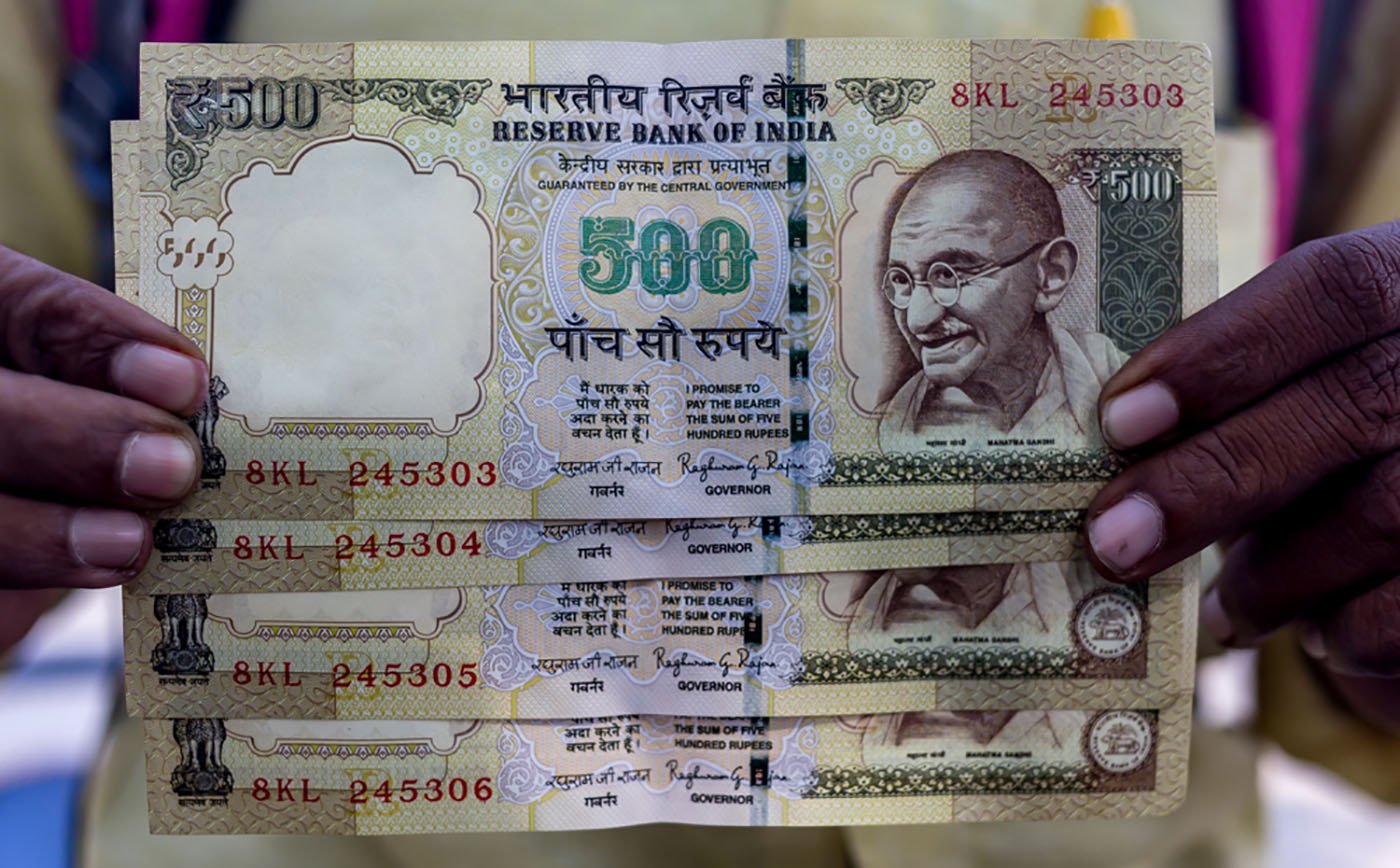 Fertiliser shop-owner P. Umesh was alarmed when, on November 23, a farmer proffered four good-looking 500 rupee notes for past purchases

He was stumped. He soon noticed that the notes had sequential numbering – as if they were fresh from a bank. So he reasoned that unused money had emerged from a hidden stack.  He suspects that large amounts of black money are being used by  Anatapur’s traders and those from nearby districts or from Tamil Nadu to buy crops from the farmers in the 11 villages of Tadimarri mandal , where the population of 32, 385 is entirely rural and literacy levels are low.

Except for a few like Umesh, demonetisation has adversely affected everyone in Tadimarri village. And because Umesh accepts the old currency (which he deposits in his bank account as a legitimate part of his income), farmers here are quickly repaying their long due fertiliser payments.

Meanwhile, not far from the fertiliser outlet, the liquor stores in Tadimarri village are doing brisk business too – because these shops, authorised as well as unauthorised, are also accepting the old notes.

“This is the 50 rupees we got back,” a slightly inebriated China Ganganna shows us. He has just used up a 1000 rupee note to buy alcohol – to be shared among eight other jobless agricultural labourers. To change a Rs. 500 note, at least Rs. 400 worth of alcohol must be purchased.

Many in Tadimarri are finding that the easiest way to change their old currency notes is by buying alcohol. “I used to drink a quarter bottle every day [after work],” says S. Nagabhushanam, who drivers tractors on farmers’ fields. A quarter of country liquor here costs between Rs. 60-80. Nagabhushanam now drinks about 4-5 times more than his usual quota. His daily wage is Rs. 500 – but he is presently jobless, so all he has of his earnings are the old notes. He spends these at the liquor shop.

Farmers in Tadimarri mandal harvest their groundnut crop after Diwali, around November, and continue to sell it through December. The farmers don’t pay the agricultural labourers working on their fields every day or every week. The labourers’ accumulated wages are paid only after the season’s harvest. So the farmers require large sums during this time of the year.

The farmers also use this money to repay their informal loans among themselves, which are taken at a 2 per cent per month interest rate. “If we don’t pay this money now, the interest will keep increasing,” says T. Brahmananda Reddy, a farmer who owns around 16 acres of land in Tadimarri village.

Reddy sold his groundnut crop a week after demonetisation, and was paid in old notes of Rs. 500 and Rs. 1000 by traders from other districts. He has deposited the money in his account, but needs a bulk amount of the new notes to pay his debts and his labourers – and these notes are still scarce at the three banks in Tadimarri mandal . 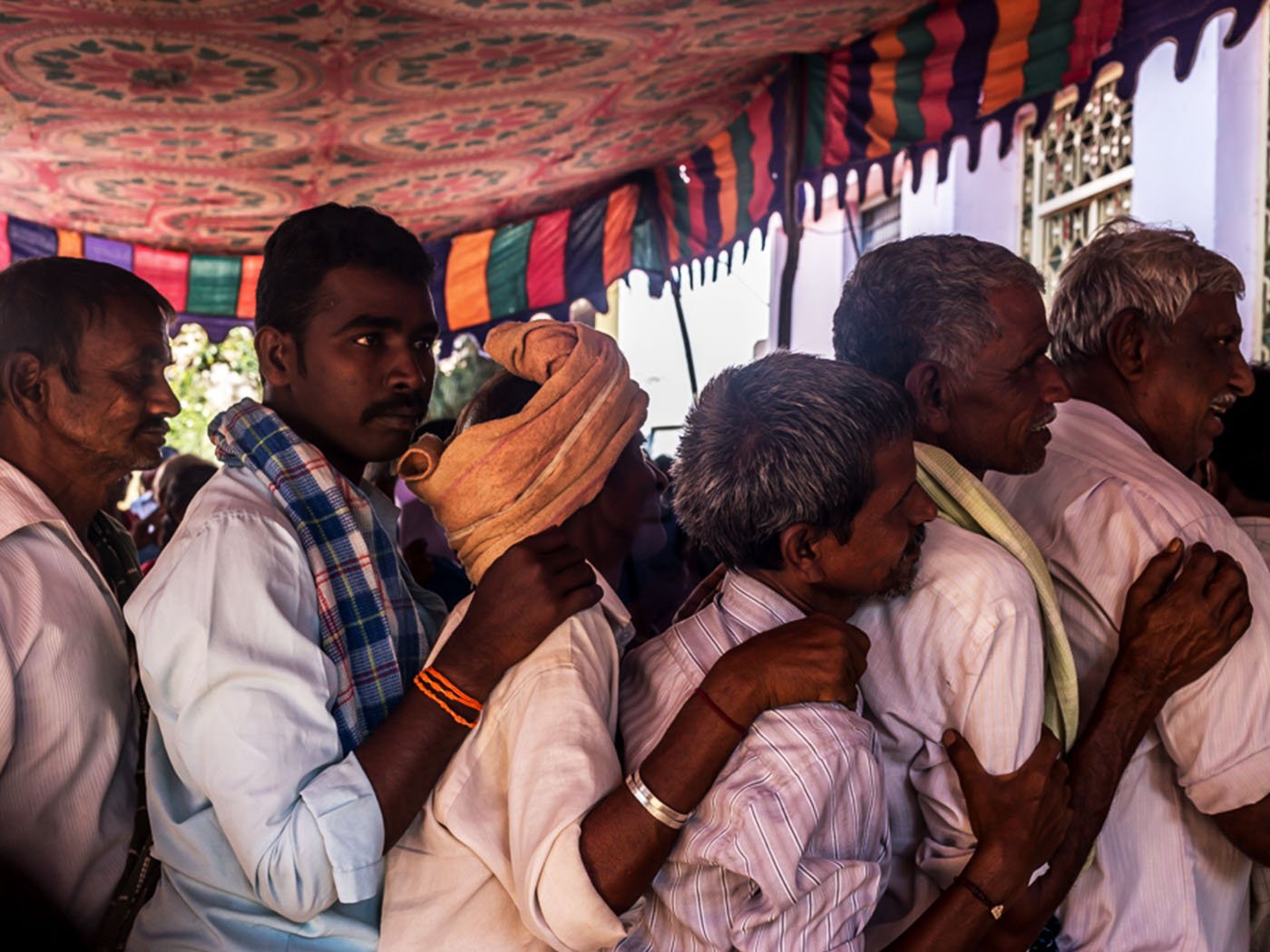 Farmers outside one of the banks in Tadimarri mandal : Farmers like T. Brahmananda Reddy need bulk amounts of the new notes to pay their debts and labourers – and these notes remain scarce at the banks here

Reddy and other farmers pay a daily wage of Rs. 200 to each agricultural labourer during the harvest season. At times, the rate can go up to Rs. 450, depending on the type of work and the demand for labourers.

Now that work has fallen short and legal currency has all but disappeared, the labourers are suffering. “We haven’t been paid for nearly a month,” Narayana Swamy, an agricultural labourer without work for the day, complains.

“But once in a while, whenever a drunk [or desperate] labourer demands money, we pay them in 500 and 1000 denominations to save our pride,” says V. Sudhakar, a groundnut farmer who owns 22 acres.

Most agricultural labourers can’t afford to go to the banks and stand in the long queues instead of looking for work. Many don’t even have bank accounts. So those who don’t get work for the day take their few old Rs. 500 and 1000 notes to a familiar place that still accepts these denominations: the local liquor store. 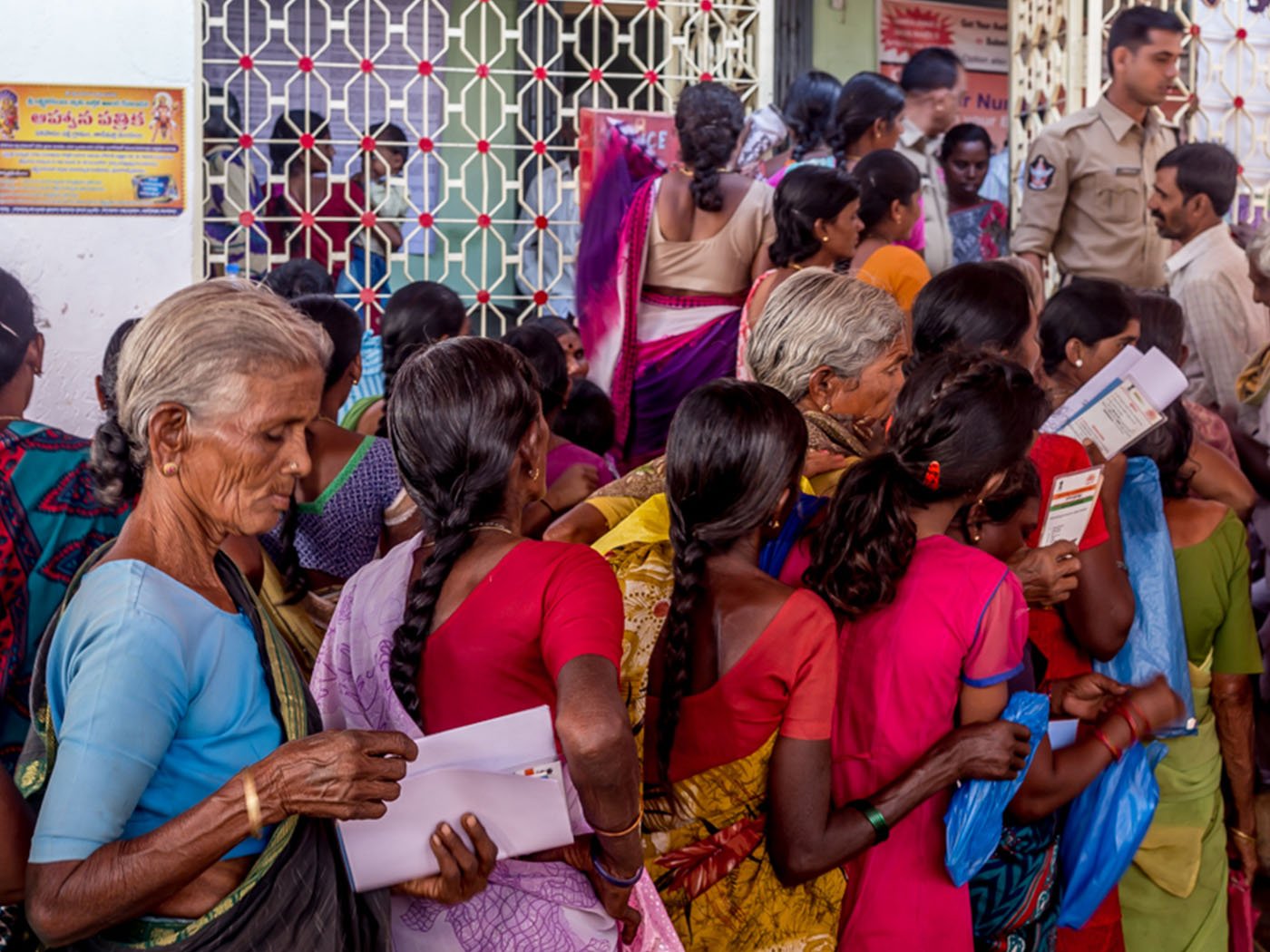 The long and winding lines at the State Bank of India in Tadimarri – many agricultural labourers here can’t afford to wait in the long queues instead of looking for work; m any don’t even have bank accounts

“To not feel the pain [from strenuous work on the fields] we must drink,” says Swamy, who has already had a few by 10 a.m. Often, farmers encourage this habit of drinking – they see it as part of getting their work done more effectively.

“We give them about 30 or 40 rupees every day, excluding their wages [which are paid at the end of the season], so that they can buy their three-ounce [of alcohol] for the day,” says Sudhakar. This mutual understanding makes a labourer trust his employer and come back to work the next morning, even though the farmer doesn’t pay the actual wage.

Meanwhile, labourers in Tadimarri who usually had a drink only in the evening after work, are now seeking alcohol throughout the day whenever they can’t find work – and paying for it with their remaining old Rs. 500 notes.