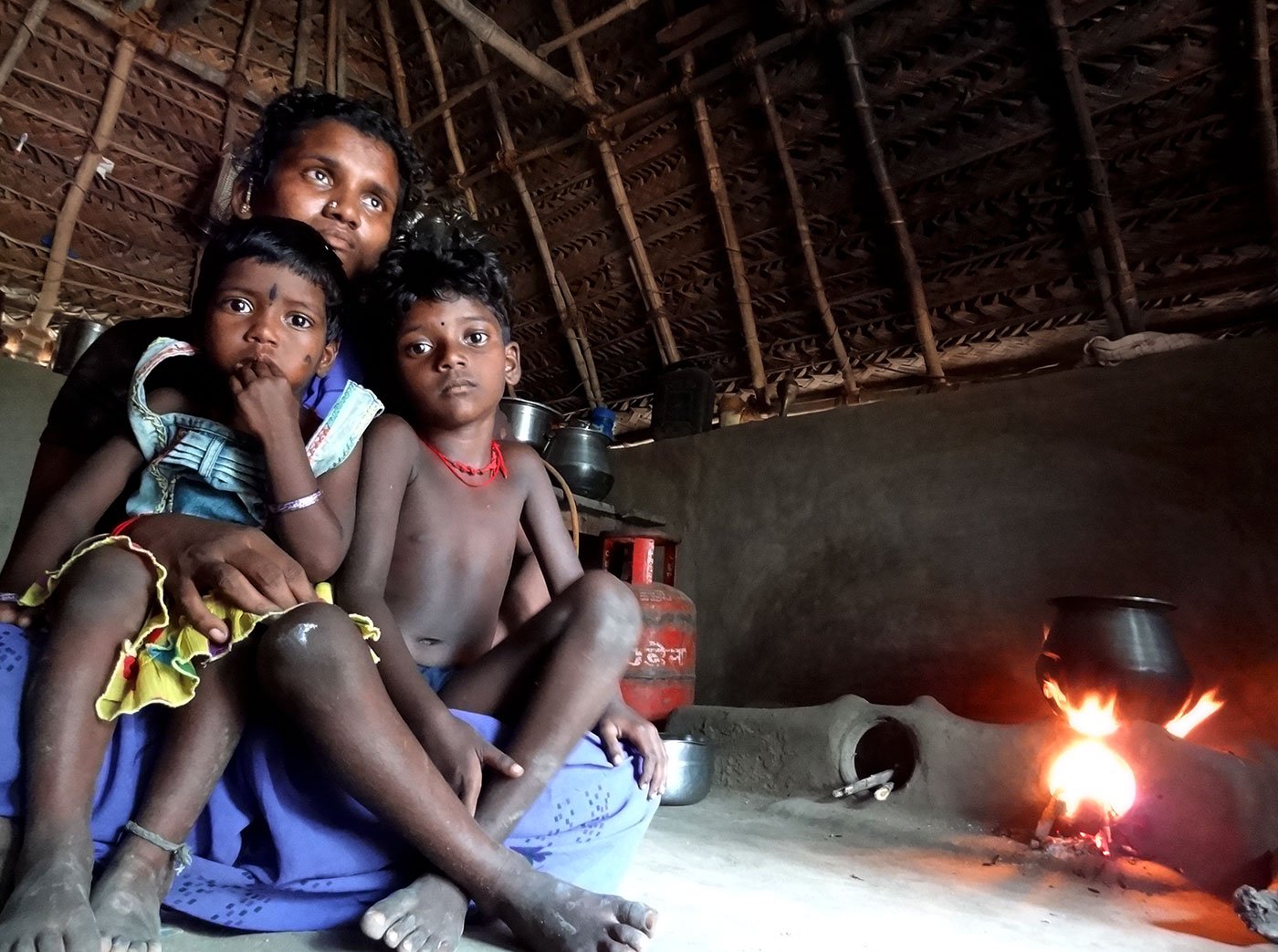 Distress and death in the delta

A long drought in Tamil Nadu's Cauvery delta has triggered a series of farmers' deaths due to heart attacks. The state denies agrarian distress is the cause, but many families have a different story to tell

It wasn’t an age to suffer a heart attack. K. Veeramani was not even 35 when the end came.

“We were on the field, he just collapsed…” his widow Kavitha tells us at her home in Kadamankudi village, wondering how her husband could die of a heart attack at such a young age. He was fit, she says, but under a lot of stress and tension.

On December 30, 2016, the two went to their farm – a 1.25 acre plot that this landless Dalit family had leased for the first time from another villager – to tend to the paddy crop, or whatever was there of it.

Around 4 p.m., she saw him falling. “When I ran to check what the matter was, he was not responding,” she says. Kavitha called for help and took him to a nearby government hospital in an ambulance. The doctors told her he had died instantly due to a heart attack. It was, they said, a shock-induced death.

Kavitha, now left alone to look after their two children, Divyadarshini, five years old, and Nityashree, two-and-a-half, is still trying to fathom what happened. “It did not rain [in 2016]; it was our bad luck,” she says. “It was the first year we decided to lease land for our sustenance, and it turned out to be the worst year for farming.”

Veeramani and Kavitha would toil on land owned by others every year, earn subsistence wages, and dream of having their own farm in a region that was once known for land that yielded three crops.

But both the summer and winter sowing seasons in 2016 failed due to drought, not just in Kadamankudi village of Nagapattinam district at the far eastern tip of the Cauvery delta, but across Tamil Nadu. 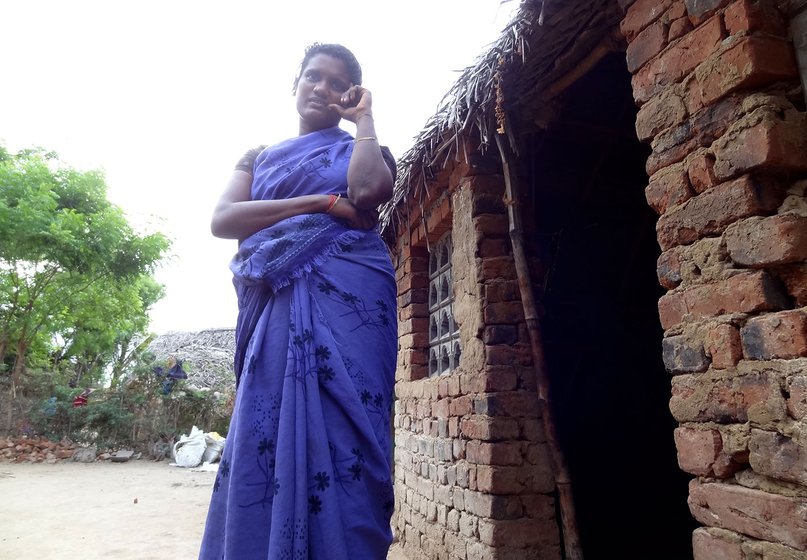 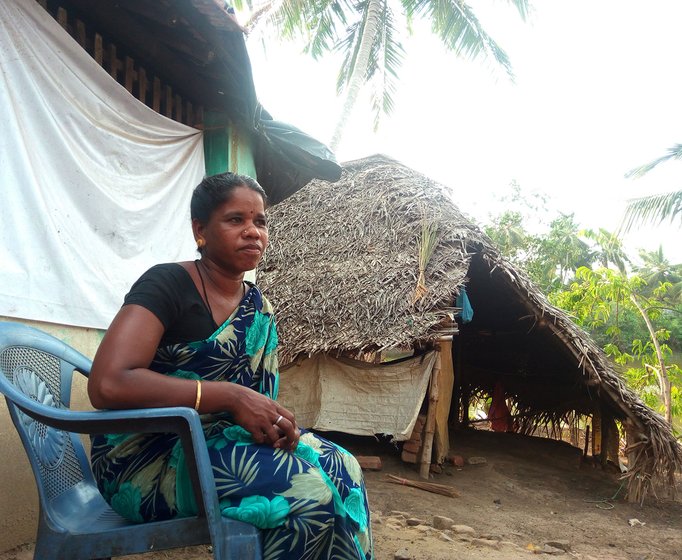 Left: In Kadamankudi village, Kavitha, K. Veeramani's widow, is still trying to fathom how he could suddenly die of a heart attack at the age of 35. Right: After T. Azhagesan's heart attack at age 36, his wife Arokyamary and his family have been pitchforked into a financial and emotional quagmire

Veeramani was not the only farmer who suddenly died of a heart attack in this region. Around 40 kilometres away, in Adhichapuram village of Thiruvarur district, Arokyamary narrates a similar tale.

No one in the family thought that T. Azhagesan, her husband, would die of a massive heart attack. He was just 36, Arokyamary says, tearfully recounting the chain of events. On November 4, 2016, he went to his farm in the afternoon and collapsed in the middle of the wilting crops. By the time they brought him to a hospital in Thiruvarur, he was already dead.

Azhagesan, a landless Scheduled Tribe (ST) farmer, decided to take two acres of farm on lease in 2016-17 – and it has turned out to be  among the worst drought-affected periods in this region over the last century.

His demise has pitchforked his family into a financial and emotional quagmire. Azhagesan’s mother Amruthavalli, 70, is now the member in the family with an income – she works as a sweeper in a nearby school for Rs. 3,000 a month. And she will continue to work to support her grandchildren – Azhagesan and Arokyamary’s two daughters and a son, all in their teens and studying.

Azhagesan never allowed Arokyamary to work on the fields. Now, she insists, she could work as an anganwadi assistant if someone helps her find a job. His father, Thaingayya, also an agricultural labourer, stopped working long ago.

The family hasn’t received any compensation from the government, and they have to repay two loans of Rs. 40,000 each from two microcredit institutions. The loans were taken in the names of Azhagesan’s wife and mother. “We’ve also pawned all my ornaments, and taken hand loans [small informal borrowings] from relatives,” Arokyamary says.

With reports growing of the agrarian distress in the region and its tragic outcomes, in January 2017 a People’s Union of Civil Liberties team comprising farm activists, social activists, students, doctors and others enquired into the reasons for these deaths in the delta.

“We studied some 50 cases of sudden deaths as well as suicides, and the prevailing situation in three districts of the delta – Nagapattinam, Thiruvarur and Thanjavur,” says Dr. Bharati Selvan, a cardiologist and social activist in Mannargudi town, Thiruvarur district, who was on the team. 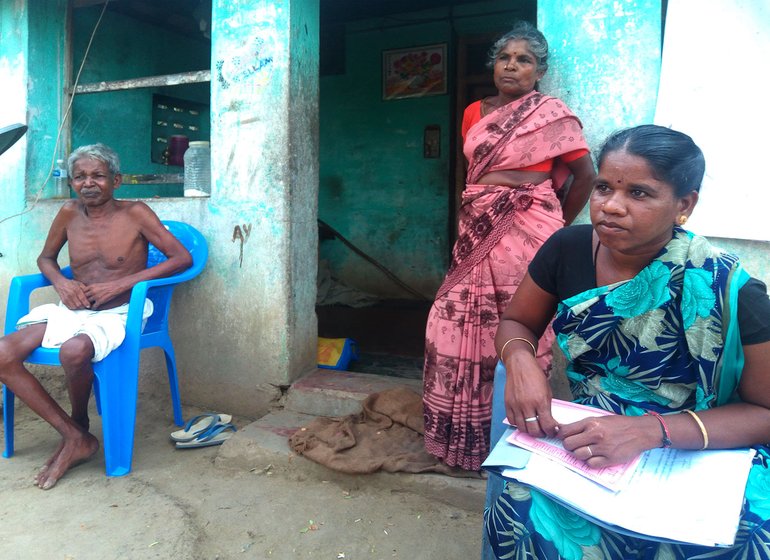 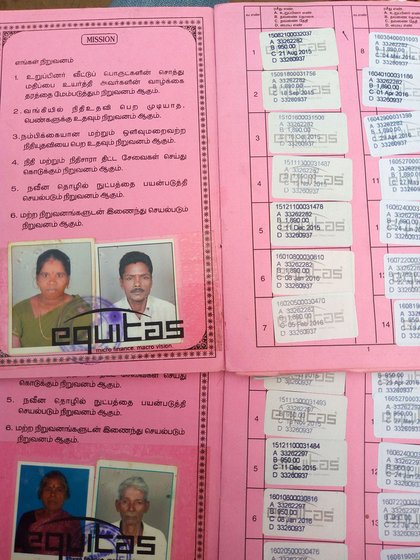 Arokyamary and her mother-in-law (also seen in the photo is Azhagesan's father) now have to repay the family's loans. Right: passbooks of the microcredit institutions

Dr. Selvan says he has never before seen such incidents in the delta. “Most of those who died had no history of cardiac problems; several were young. We can relate these to turmoil on the farm and family fronts. Though the government does not accept it, we have reasons to believe that sudden emotional stress and economic turmoil could have caused these deaths,” he says. “The crisis is worsening and the government’s apathy is telling.”

The Tamil Nadu government though says these incidents are not related to the prevailing drought and agrarian distress. It attributes them to factors such as domestic problems and health issues, or sees them as accidental deaths.  This despite over 200 sudden deaths due to heart attack from January to June 2017, according to estimates of local farmers’ groups.

And these are in addition to suicides by farmers.  As many as 106 farmers were reported to have committed suicide in just one month – December 2016 – according to a notice issued by the National Human Rights Commission to the state government on January 5, 2017.  The NHRC indicates that a majority of these deaths were concentrated in the eight districts of the Cauvery delta, which together have a population of close to 8 million (Census 2011).

Though the state government still denies it, drought seems to be the biggest reason for the wave of shock-induced deaths in such a short period of time in the region. In March 2017 the government itself declared 21 of Tamil Nadu’s 32 districts as drought-affected.

The usual northeast or receding monsoon, which sweeps across Tamil Nadu, coastal Andhra Pradesh, south Karnataka and Kerala between October and December, failed in 2016. That monsoon usually helps Cauvery delta farmers in eight districts to grow paddy. Across Tamil Nadu as a whole, the winter crop depends more on the northeast monsoon than in any other Indian state

Some districts in this region have now received showers that precede the July to September southwest monsoon. But in 2016, the state registered a deficit of 60 per cent in the southwest and northeast monsoon.  Hit by shortfalls in both monsoons, Tamil Nadu reported a drop in the 2016 winter sowing of rice by well over 30 per cent and of production by more than 60 per cent, according to estimates of the agriculture department of the state government. 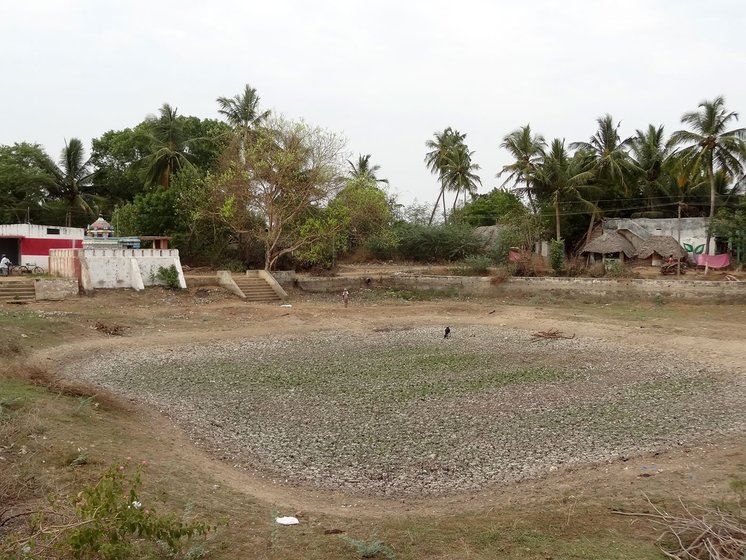 A dry tank in in Kadamankudi village. Thousands of tanks have dried up in the drought of 2016-17 in the Cauvery delta, a once water-surplus region

In the farming season gone by – October 2016 to March 2017 – close to 35 lakh hectares have come under extreme to moderate drought conditions in Tamil Nadu, according to the Integrated Drought Severity Index (IDSI). This accounts for up to 30 per cent of the total area of Tamil Nadu.

This in a once-fertile Cauvery delta, which until two decades ago was a three-crop region. Over 20 years, a fall in the availability of water brought it down to two crops. The 2016-17 agricultural year was the first time in a century that the farmers of this once water-abundant region could not plant and harvest even one paddy crop. In addition to the failed monsoon, Tamil Nadu’s share of the Cauvery water was not released by Karnataka due to drought on its side of the river catchment.

The resultant loss of crop has been devastating.

In a small thatched hut in Kadamankudi village, Veeramani’s photo now hangs on the wall in a corner, to the left of the entrance. A copy of the agreement between Veeramani and the land owner, that Kavitha shows us, is actually a sub-lease. The land originally belongs to an endowment trust of a religious institution; the man from whom Veeramani had taken the land was merely an agent. The lease tenure was for two years for Rs.  25,000 a year, the agreement states. It was the same arrangement for Azhagesan.

This meant that Veeramani and Azhagesan could not procure low-interest credit from the banks since the farmland was not in their names – a key requirement for crop loans.

“We never went to the school,” Kavitha says. “We wanted our children to go to school, so we decided to take land on lease and slowly make a decent income to support their education,” she says. It backfired.

Kavitha received Rs. 3 lakhs as compensation from the state government, which has, reportedly under political pressure, given it to some of the farmers’ bereaved families. She has repaid the Rs. 50,000 the family owed to a microfinance firm and other small loans taken from relatives.

“If the money had come to the rescue earlier,” she laments, “my husband would not have died.”

Related stories: At a '100-day' site, the elderly battle drought & Between life and death – a drought