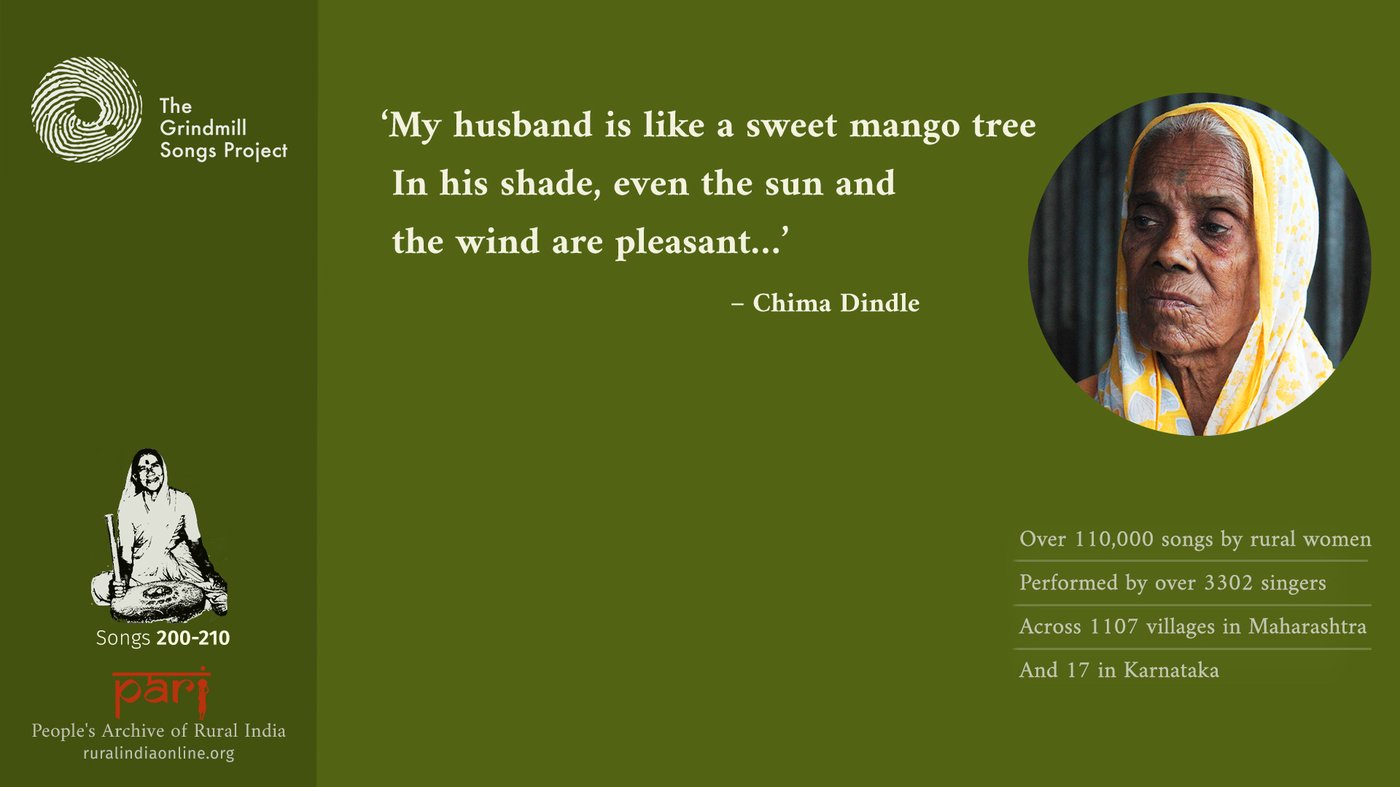 Chimabai Dindle in Malthan village of Pune district says she barely remembers the ovi she once sang at the grindmill. However, after many requests from the PARI GSP team,  she sings a few about loving husbands, wandering ascetics and the ‘god of the grindmill’

“Who has weddings in the village now? Who grinds haldi [turmeric] these days?” asks Chimabai Dindle. And says she no longer remembers her grindmill songs because she no longer sings them.

In 1994, Chimabai and several others from Wadavali village in Mulshi taluka were forced to resettle in Daund taluka because of the construction of the Varasgaon dam over the Mose river. On July 24, 2017, we travel to Daund to meet her and other singers who had contributed to the grindmill songs database.

Our first stop is Dapodi village, where we meet Sarubai Kadu, whose singing is featured in two articles on PARI. Sarubai tells us where we can find Chimabai, who sang 500 ovi for the original GSP team in the 1990s. So we head to Yeole vasti , a hamlet of Malthan village. We learn only later that Chimabai and Sarubai are sisters-in-law.

When we reach Chimabai’s three-room house made of tin sheets, we find her sitting in one place, holding the edge of a wall for support. She has been suffering from back and neck pain for some time. “I don’t go anywhere now, don’t leave the house. I just keep an eye on the kids,” she says, referring to her two great grandchildren who are taking an afternoon nap. There is a grindmill in her home. “But we don’t use it. Maybe only sometimes to grind harbara [gram].” 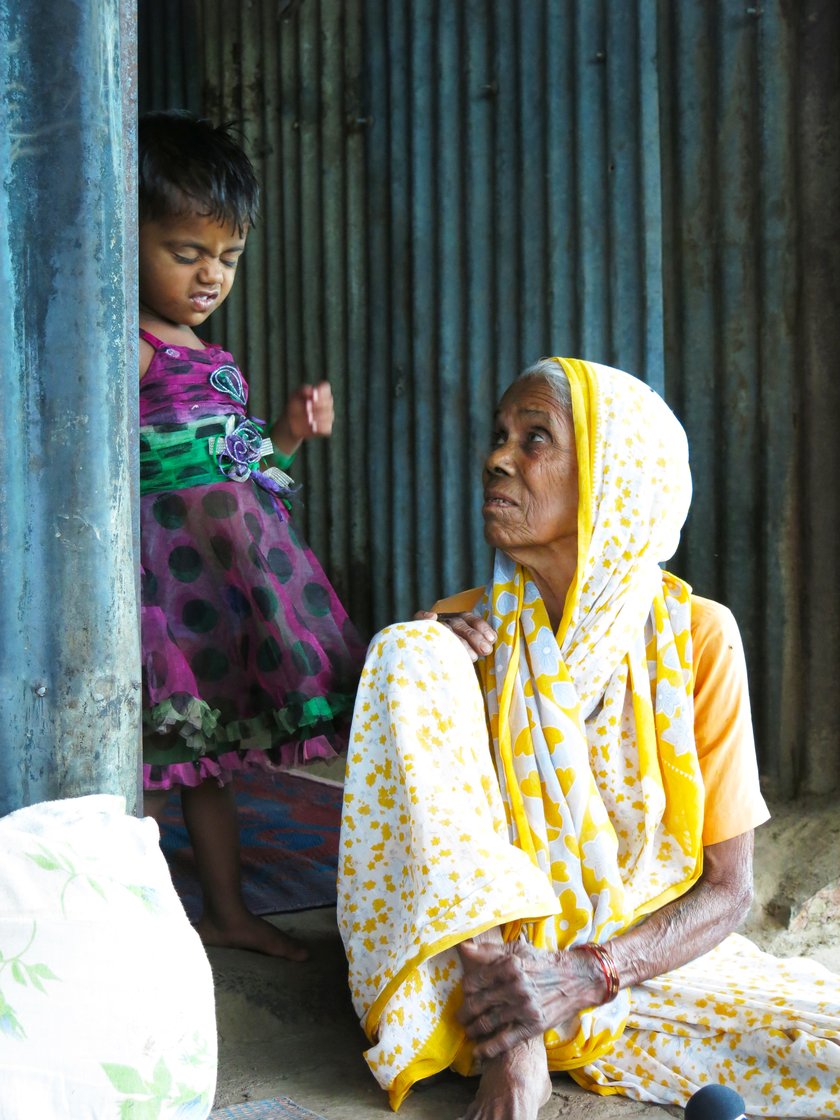 Chimabai also keeps an eye on the hens clucking just outside. When one of them crosses the threshold, she shooes it away and delights us by letting out a sharp whistle. A few kittens are scurrying about and she warns her granddaughter-in-law when one of the kittens enters the kitchen.

Chimabai’s son lives in Pune while her daughter-in-law and grandson work on their six-acre farm in Malthan. They grow sugarcane and have taken a loan to drill a borewell. “We are in debt, with interest mounting on our loan. We have one sheep and a cow that is not milching. There is no milk for tea.” On that wistful note, she gently tells her granddaughter-in-law to heat water, and she serves us sweetened black tea.

“In Wadavali, we worked in the fields for four months in the monsoon and lived off what we grew for the next four months. We had to climb and walk a lot but life was good. Here, there is work all year round – weeding, weeding all the time. But I don’t do anything now. My husband died a few years ago. My sansar [world] is over,” says Chimabai with a sigh.

Chimabai’s ovi were written down by the original GSP team in the 1990s. When we read out some of them, her granddaughter-in-law cannot help but ask, “When did you sing all these songs, Ajji [Grandma]?” Chimabai insists she doesn’t remember any songs, but when we plead, she relents and sings some, which we record on camera.

Watch video: 'My husband is like the shade of a sweet mango tree,' sings Chimabai

Chimabai sings about various things. Her first ovi is based on an incident from the Ramayana : Sita steps across the threshold of her home in the forest to offer food to Ravan, who comes in the disguise of a sage but eventually abducts her. In the second, third and fourth songs, she tells us about the happiness and comfort that a married woman finds in her loving husband. Such a man is like a sweet mango tree in whose shade a woman can endure harsh sun and strong winds, she says. For a man who loves his wife makes her forget that she has left her mother’s home, which may be very far away.

The fifth and sixth couplets speak of the abundant tulsi plants in Pandharpur that make it difficult for the pilgrim to find a place to stay or even a spot to stand. In the seventh ovi , Lord Vitthal (a manifestation of the Hindu god Vishnu or his avatar Krishna) tries to appease a sulking Rukmini (Lord Krishna’s wife) by planting jaswand or red hibiscus.

This is followed by two ovi in which the singer ties an areca nut to the grindmill and applies haldi ( turmeric) on her son, the bridegroom, who is like a “cluster of pearls.” She offers rice to the grindmill, which is worshipped as a god on festive occasions.

In the last two couplets, Chimabai tells us about a gosavi or an ascetic, who comes to her door one morning seeking alms. Her daughter offers him flour and rice – an act of charity seen as a religious duty towards wandering ascetics.

Ravan of Lanka came dressed as a gosavi [ascetic]
He carried away Ram’s Sita, reciting ‘ alakh’*

He is not just my husband, but like a king from a past life
Like a mother, he fulfils all my expectations and wishes

My husband is like a sweet mango tree
In his shade, even the sun and the wind are pleasant

He is not just my husband, he is like the shade of a sweet mango tree
I tell you, O woman, my mother lives far away

I went to Pandharpur, but there is no place to stay there
Lord Vitthal has planted fields of tulsi plants

It is so crowded in Pandharpur, where shall I stand?
Lord Vitthal has planted islands of tulsi plants

Rukmini is sulking, she goes and sits near the old mansion
Lord Vitthal has planted hibiscus [for her]

God of my grindmill, I tie an areca nut to you
Haldi [turmeric] is applied to my son, the bridegroom

God of my grindmill, I feed you rice
My little son, the bridegroom, is like a cluster of pearls

Waking in the morning, a gosavi [ascetic] came from the hermitage
My dear daughter gave him flour as charity

Waking in the morning, came a lame gosavi
My dear daughter gave him rice as charity

Note: Alakh : a word uttered by ascetics when they come to the door asking for food. Derived from the Sanskrit term alakhsya , which means “one who cannot be perceived.” 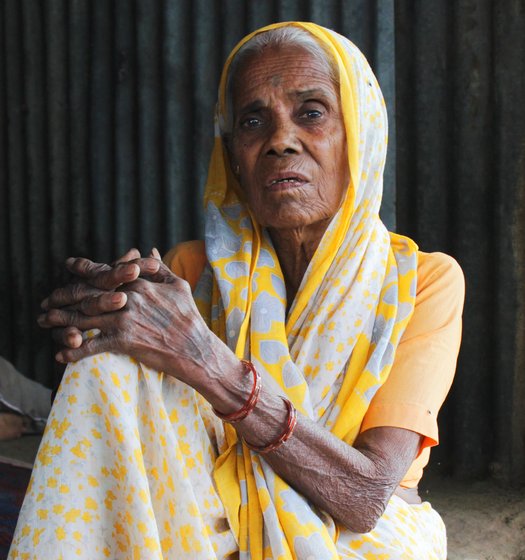 Children: A son and a daughter

Date: These songs and this information were recorded on July 24, 2017.