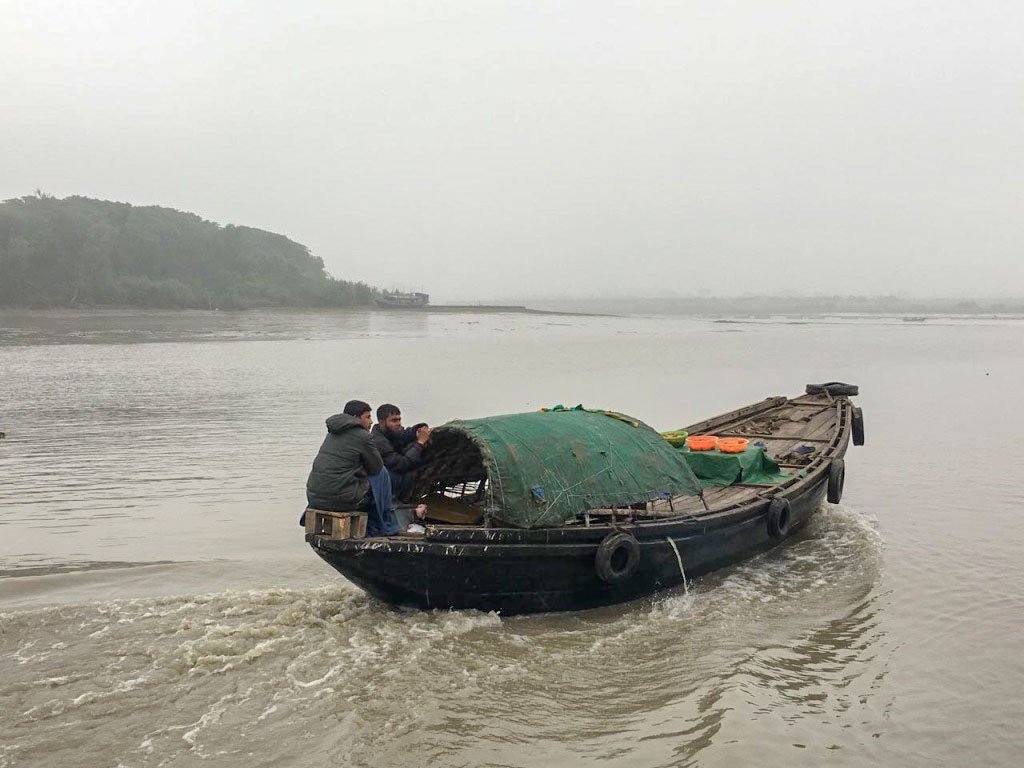 A fishy catch-22 in the Bay of Bengal

Fish workers, who camp on uninhabited islands in the Bay of Bengal for seasonal fishing, say with the fish depleting, water becoming inert and big trawlers taking over, they may be forced to leave

“ Sab maach sesh [All the fish is over],” says Murali in broken Bengali, doleful but smiling.  “ Shob kichchu different [Everything has changed],” he adds, since we met two years ago at the Ramnagar fish market near Jaldha village. The fish in the Bay of Bengal, Murli has noticed, are disappearing.

He speaks of a ‘ kalo jone ’ in the middle of the ocean. In 2017, scientists had reported  a ‘dead area’ or zone of around 60,000 square kilometres that is growing in this ocean. It has negligible amounts of oxygen, depleted nitrogen and almost no marine life. This is a result, reports say, of natural processes as well as human interventions.

Murali (his last name is not available), who belongs to the Bestha fishing community, grew up in Govundlapalem village (Gundlapalem in the Census) in Nellore district of Andhra Pradesh. For over two decades, he has been travelling to Jaldha village in Ramnagar block of Purba Medinipur district on the Bay of Bengal coast for the October-March fishing season. He has picked up some Bengali over the years, and speaks it mixed with Hindi and a bit of English.

Murali boasts of having family and friends in many ports along the Indian, Bangladeshi and Sri Lankan coasts. “From Jaffna to Jambudwip, everyone is family,” he brags cheerfully. He doesn’t tell me many details, but introduces me to his friend Swapan Das – “ Ai amaar bhai ” [He’s my brother],” says Murali, who is around 40. 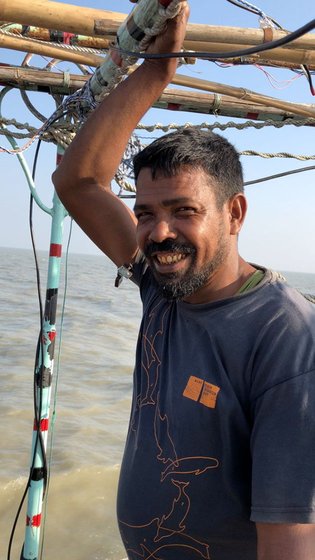 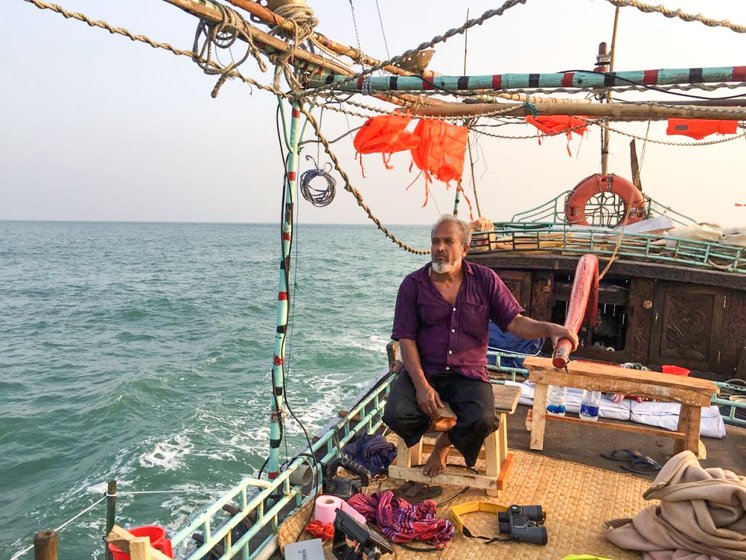 Since the early 2000s, working here has become difficult, says Murali (left). He and others seek jobs seasonally on fishing boat (right) such as this one owned by Sobahan Shordaar

Swapan, 35, is well travelled too. The two are among the many migrants at this market and they work as crew on fishing boats for daily wages and food. During the October-March season, they earn between Rs. 3,000 and Rs. 10,000 a month (depending on the catch).

The three of us slowly make our way to Abjakhali village in South Twenty-Four Parganas district, first in a bus and then by boat, stopping at Jambudwip (Jammu Island in the Census) on the way. We’re going to Abjakhali to see the fisheries and the famous red crabs, which I am here to survey. Flanked by Sagar Island and Frasergunj, Jambudwip is uninhabited half the year. From October to March, it becomes a fishing camp, occupied by fish workers from different parts of the subcontinent. When I ask Swapan when he will go back home, he smiles and says, “But this is my home.”

This seasonal fishing activity and the the fish workers’ transient homes have come to be known locally as sabar . For long, the shifting population of fisherfolk has set up temporary villages on low-lying islands like Jambudwip. Each of these fishing villages are made up of several kunthi s or units; each kunthi has an ‘owner’ responsible for 1-10 fishing boats. Irrespective of where they are from, the fish workers all know each other and often, entire families move here from nearby areas to work as boat crew or to dry fish in the winter breeze.

Since the early 2000s, however, settling here even for a few months has become difficult because of stricter border control, say Murali and Swapan, and jobs on the boats are no longer easy to come by. Murali says, “The fish is over, and there is more police now [patrols] so the work is over.” 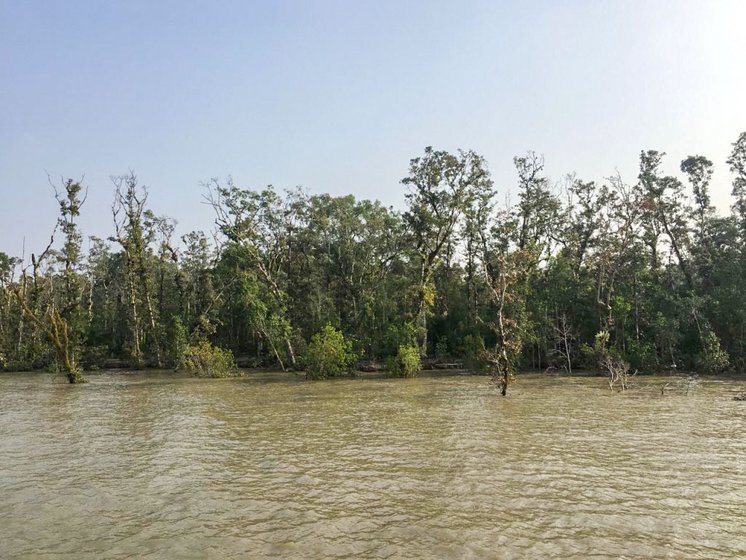 Left: Fisherfolk set up transient villages on islands like Jambudwip. Right: But fish that were common in the Sundarbans are disappearing

Besides the ‘dead zone’ and depleting fish, he and other fishermen are finding it hard to compete with commercial Chinese, Singaporean and other trawlers in the deep seas. And with the growing commercialisation of marine fisheries from the late 1990s, the rates of the catch have also steadily declined. Fuel prices have also gone up, making it more expensive to operate the small boats. “Everything is different… the sea, the fish, our work… everything,” says Murali.

Swapan speaks of how the foreign trawlers come with their own crews and scoop up the seabed, taking everything in their nets. He has noticed that some species are becoming hard to find. Freshwater fish like chapila , mola , kajli and batasi that were common in the Sundarbans are disappearing rapidly as well.

According to a paper in the journal Aquatic Ecosystem Health and Management , there has been a 0.5 to 1.4 degree Celsius increase in the minimum temperature of rivers and lakes used for aquaculture in the Ganges-Brahmaputra Delta. This has affected not only fishing but also the income of fisherfolk, who have limited access to other livelihoods. They are now being forced to move into other occupations and migrate for work.

The fishermen may not use the term climate change to explain what is happening around them, but they understand its effects on where they live, what they eat and how they earn. This year, Murali has realised that sabar is no longer viable. He knows he will have to move elsewhere to fish. For Swapan, traditional fishing is his only skill and he is aware that in a few years it may fetch him nothing. He is not sure if he will be back here next year. Or if there will be another season.

Neha Simlai is a consultant based in Delhi, who works on environmental sustainability and conservation across South Asia.

Other stories by Neha Simlai