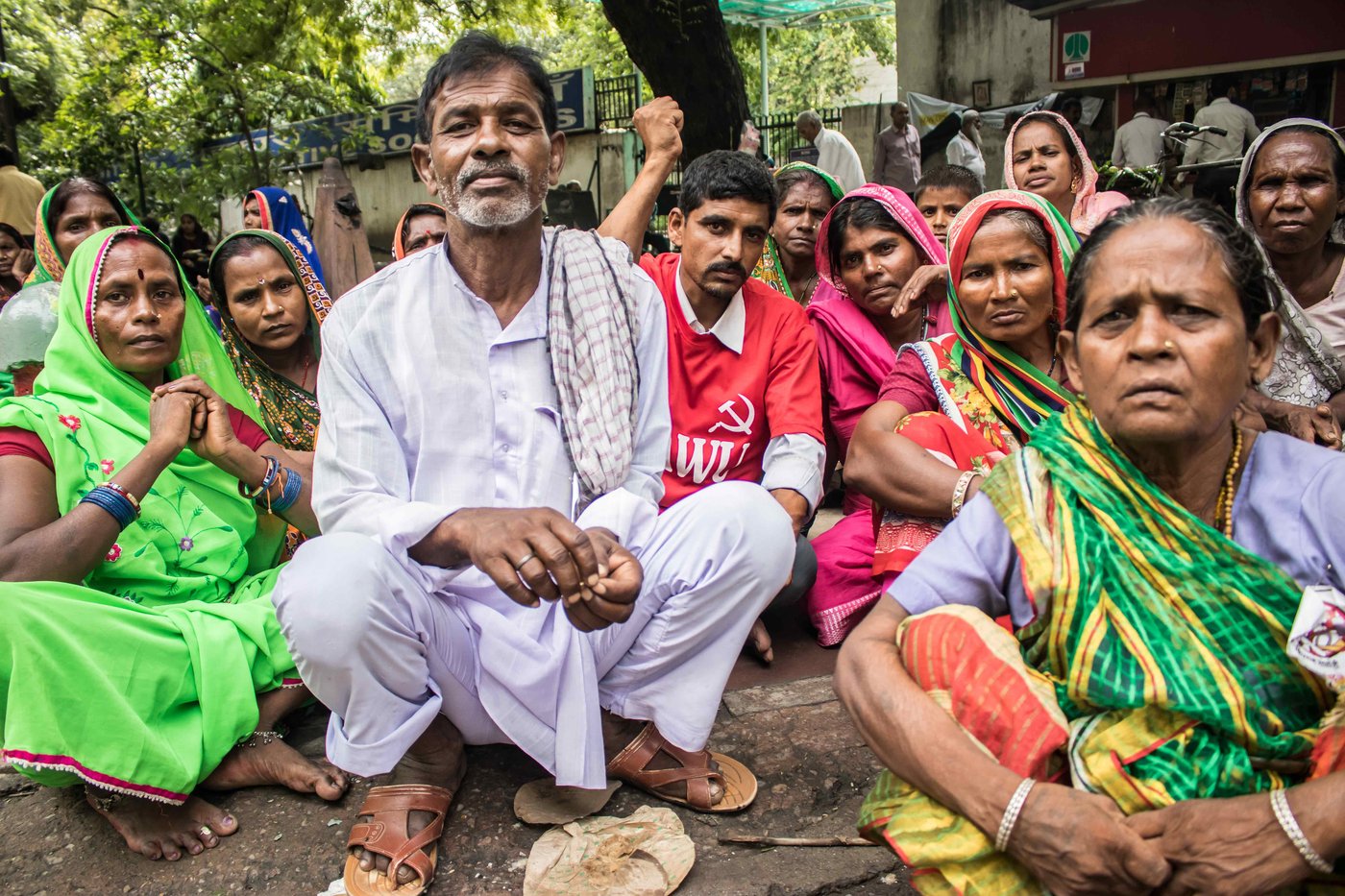 ‘This rally will mark a turning point’

On September 5, Teachers’ Day, over 3 lakh farmers and labourers converged on the capital to teach the government a lesson about an egalitarian democracy that ensures fair wages and other rights

Relishing a moment of quiet in the midst of the rally, M. S. Shantkumar seems to be wisely named. A former employee of the Bhilai Steel Plant in Chhattisgarh and a seasoned activist of the Central Indian Trade Union (CITU), he has a gentle but steely resolve. “I have nothing personal against Narendra Modi. Nor against Rahul Gandhi,” he says. “I do, however, have a problem with policies that dehumanise people.”

If the Bharatiya Janata Party-led government continues to follow an anti-poor template of development in Chhattisgarh and the neighbouring states of Jharkhand and Madhya Pradesh, Shantkumar points out, “they will be taught a lesson in the forthcoming election.”

He expresses concern about the privatisation of public sector undertakings and inadequate wages, as well as concern for defenders of land rights in Chhattisgarh. Shuffling about as he talks, he ensures that he isn’t obstructing  a poster condemning the arrests of human rights activists.

In doing this, he highlights two important aspects of the September 5 rally in Delhi – the growing workers’ and farmers’ alliance, as well as the importance of jointly defending civil liberties and economic rights. As Hannan Mollah, the general secretary of the All India Kisan Sabha (AIKS), one of the organisers of the September 5 Mazdoor Kisan Sangharsh Rally, observes, “This rally will mark a turning point over time. It will gradually transform the farmers’ struggles into a people’s movement.” 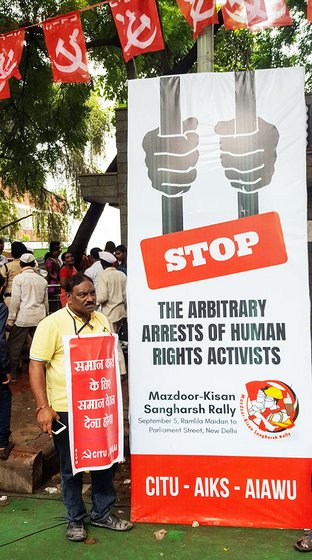 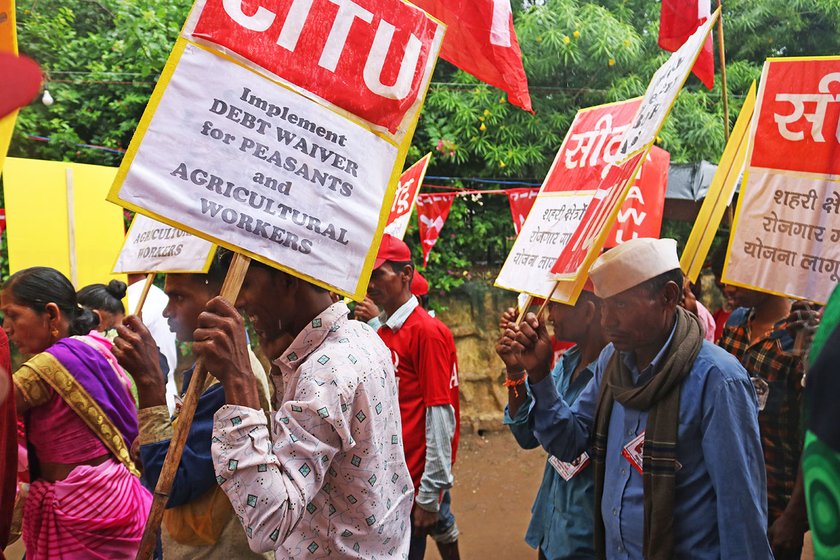 M.S. Shantkumar (left) stands beside a poster against the arrests of human rights activists, amid protesters demanding agricultural loan waivers

The rally was called for by three major unions – AIKS, CITU, and the All India Agricultural Workers’ Union – and supported by various other groups and federations. Its 15-point charter covers a wide spectrum of demands, which reiterate long-standing calls for loan waivers and remunerative prices as specified by the National Commission on Farmers; universal social, food and nutritional security; a minimum wage of not less than Rs. 18000 per month for all workers; as well as the need to strengthen and expand the Mahatma Gandhi National Rural Employment Guarantee Act to urban areas.

Mollah is hopeful that the sight of 300,000 workers from 26 states of the country, marching from Delhi’s Ramlila Maidan to Parliament Street in the rain that day, will break the apathy of the “consuming classes” and urge them to support a call for a 21-day special session of Parliament that focuses on the persisting agrarian crisis and the growing livelihoods crisis in the country.

Mollah is hopeful that 300,000 workers from 26 states of the country marching from Ramlila Maidan to Parliament Street will break the apathy of the 'consuming classes'

The diversity of the participants at the rally speaks of the webs of alliance-building that are already underway, with support and solidarity being extended across union and federation lines.

Akshay Birwadkar of Mumbai, the acting secretary of the Forward Seamen’s Union of India, describes the many ways in which seafarers all over the country are being impacted by policies – the opening up India’s seas to foreign registered vessels is diluting economic protections and creating massive job insecurity for Indian seafarers. He also expresses concern for fishermen: “Instead of trained seafarers, fishermen are being hired as undocumented seamen to cut costs. As a result, they have no health or risk cover in hazardous situations.”

Support and solidarity at the rally are not just being extended across union and federation lines. Muruganidhi, a former fauji , is here as his wife Tamilarasi’s photographer and translator. He proudly introduces her as ‘the queen of Tamizh' (Tamil).  Tamilarasi, a leader of the Pondicherry Anganwadi Staff Association, is representing anganwadi workers from all four districts of the union territory – Puducherry, Mahé, Yanam and Karaikal. She expresses their mounting concerns: “ I have been an anganwadi teacher myself for over 30 years. Can you believe that all we get after retirement, in our old age, is only a lump sum of Rs. 3 lakhs in the form of an Employees Provident Fund payment, and no pension?” she asks. 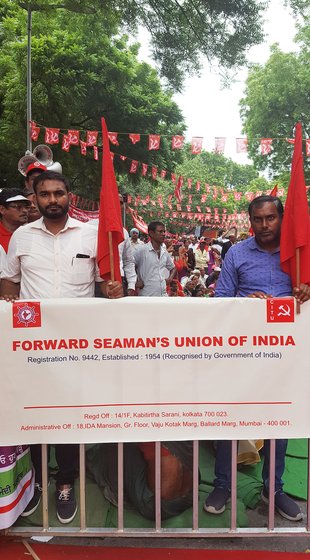 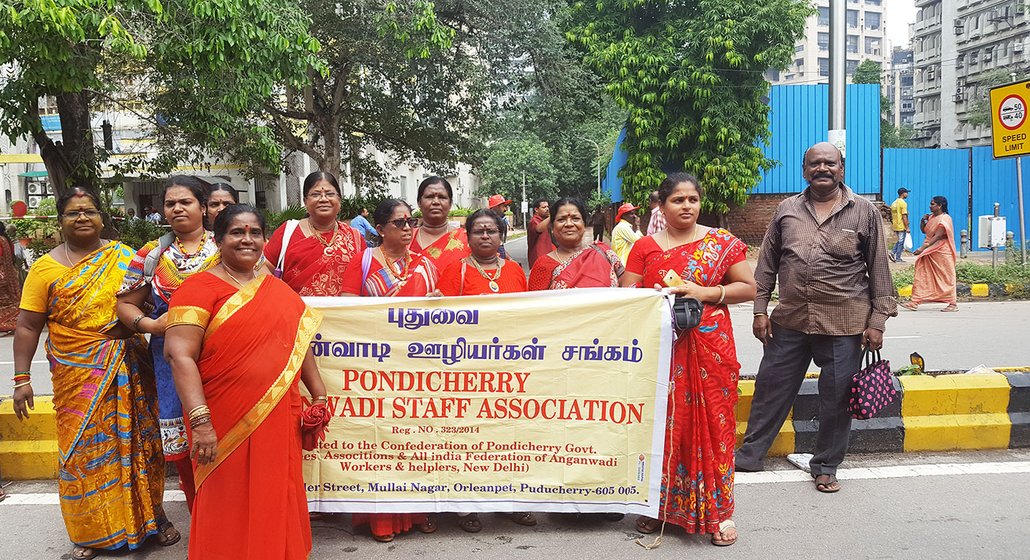 Left: Akshay Birwadkar of the Forward Seamen’s Union of India is concerned about the growing job insecurity in his work. Right: Tamilarasi (standing in front of the banner) and her colleagues from the Pondicherry Anganwadi Staff Association are here to demand better wages and pensions

Many of the anganwadi teachers with her at the rally, express, through Muruganidhi’s translations, a “fear of helplessness even in our old age, after working for inadequate and irregular wages all our lives.” Though the chief minister of Puducherry (in a press release) recognises them as the ‘torch-bearer of welfare measures’, Tamilarasi points out that the government hasn’t regularised anganwadi workers and helpers as government employees. They are still listed as contractual scheme workers of the Integrated Child Development Services, and get only an honorarium of Rs. 3,000 a month, and the helpers get just Rs. 1,500.

The 3,000 rupees rankles Arjit Kaur too, who has come from Fatehgarh Sahib district of Punjab. She beams at a passing Kolkata contingent of marchers of the Life Insurance Corporation’s Agents Organisation of India, who are demanding a fair pension and raising slogans of ‘BJP bhagao, desh bachao ’ (‘Drive out the BJP, save the country’). Kaur is the president of the Punjab unit of the All India Federation of Anganwadi Workers and Helpers, and she has a challenge for Prime Minister Narendra Modi: “You made many promises before being elected in 2014 to anganwadi workers. Nothing has changed, which is the reason we are here in Delhi today. You expect us to run households on the pittance given to scheme workers…We would like to see you try subsisting on Rs. 6,000 a month.” Despite her anger, she has generously asked the prime minister to manage on double the salaries the “ foot soldiers of the nation’s literacy ” receive.

'You made many promises before being elected in 2014 to anganwadi workers. Nothing has changed, which is the reason we are here in Delhi today'.

By the end of the rally, Soma Majhi, an anganwadi worker from Tongi village, in  Dadi block of Hazaribagh district in Jharkhand, seems tired but hopeful.

She is accompanied by her husband and two children. This is their first time in Delhi, and four-year-old Aayushri is visibly excited as she their ‘vacation’ itinerary. This is possibly the only family holiday Majhi’s schedule has permitted. “I’ve worked as an anganwadi worker for many years and never received an increment. We get neither paid maternity leave nor sick leave. I spend hours attending to the needs of other people’s children. It is very precious – this little time that I have got to spend with my own children after so long.”

Meanwhile, preparations for the next event on Parliament Street are underway – a protest meeting against the detention of human rights activists. Soma wonders aloud if she can attend it. Her husband, Jagdish Chandra, a member of CITU, says, “She labours all day and yet the government doesn’t count her as a formal employee. The government’s policies are destroying the families of labourers and farmers.”

Will they protest again if their demands are not met after this rally? “It would be difficult to come to Delhi again, but if the union gives the call, we will come,” he says. “We are not unruly citizens, but have no other option except to fight for our rights.”