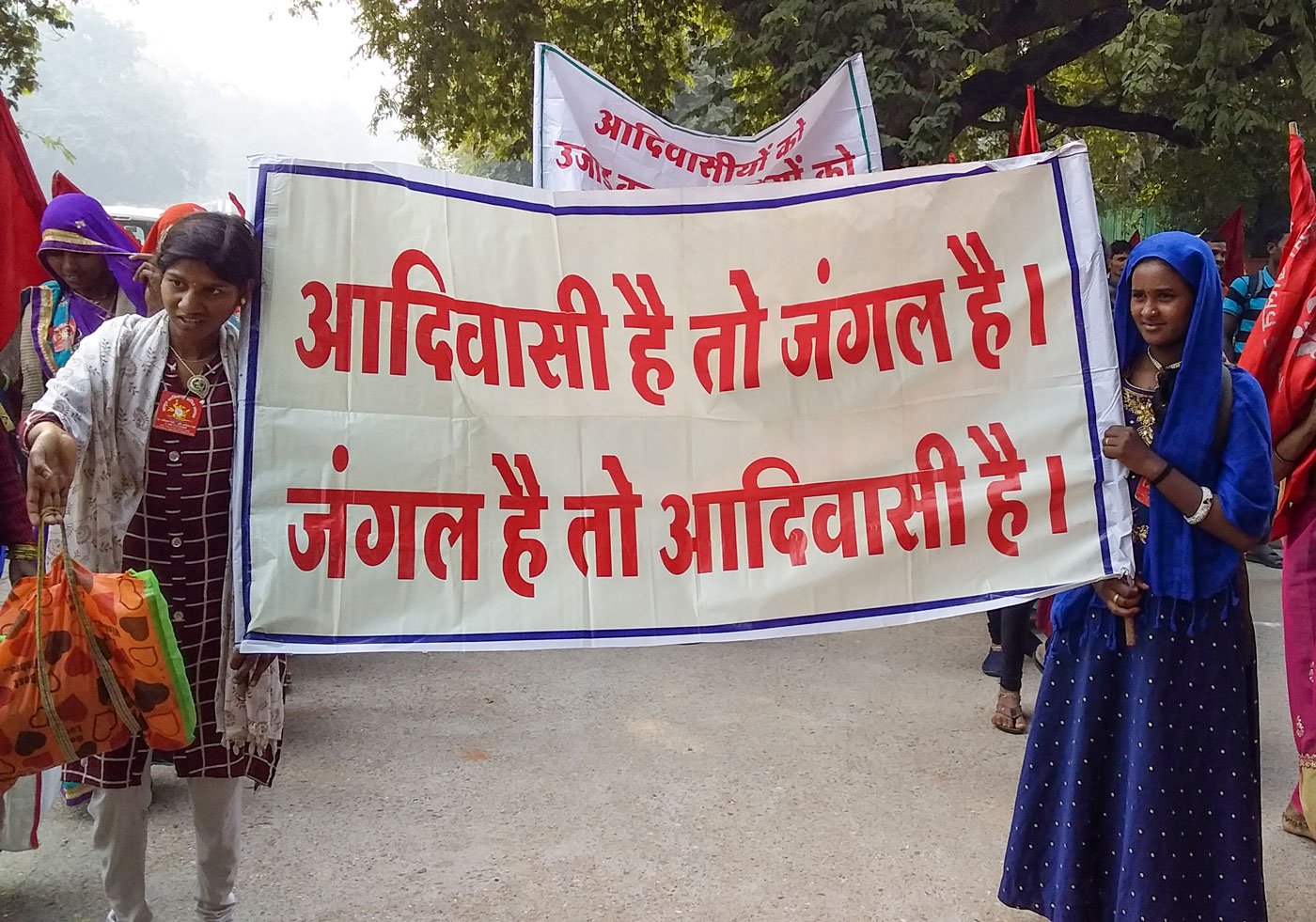 'Let them ask animals for votes'

At a rally last week in Delhi to demand utilisation of the Forest Rights Act, many spoke of encounters with the forest department, their struggles to secure forest rights, and resolve to save the FRA in an ongoing case

“ If they want to only protect wildlife and not people, let them turn to animals for votes during elections. We neither get our forest rights, nor even the status of human beings,” says Anar Singh Badole. He is referring to claims made by officials of the Madhya Pradesh forest department that Adivasi communities harm the environment, which are used to justify evicting them from their ancestral homelands.

Last week, 35-year-old Badole, who belongs to the Barela Adivasi community, came to Delhi from Khairkheda village in Burhanpur district of Madhya Pradesh to attend the Forest Rights Rally on November 21, 2019.

He says that the forest department denies many Adivasis rights over their community forestlands by repeatedly bulldozing their crops, thereby forcing them to seek daily wages as agricultural labourers. The land is then claimed by forest bureaucrats to set up plantations that bring revenue for the forest department. The department is reportedly also planning to set up tiger reserves across 12 villages in Burhanpur district.

He speaks of how the Madhya Pradesh forest department hits back when his Barela Adivasi community tries to assert their agricultural rights on community forest land. For example, a protest against an eviction drive in the neighbouring village of Siwal led to a firing of pellet guns by forest officials in July 2019. “The government wants to set up plantations to lease to corporations on the land where we grow food crops like soybean, maize, jowar and rice,” he says. “Our crops are burnt to intimidate us and force us to relocate. Our claims to these lands are still pending.” 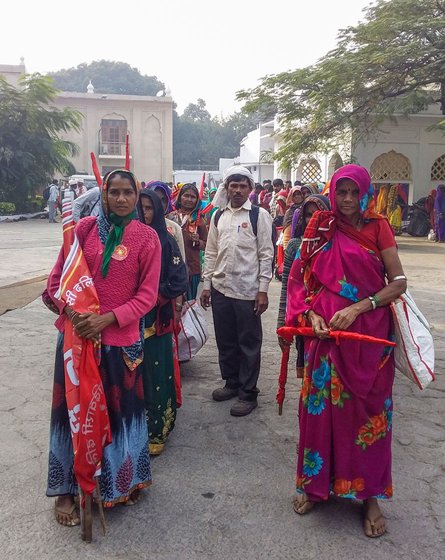 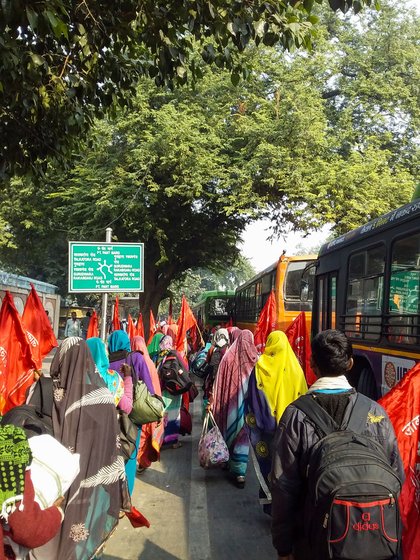 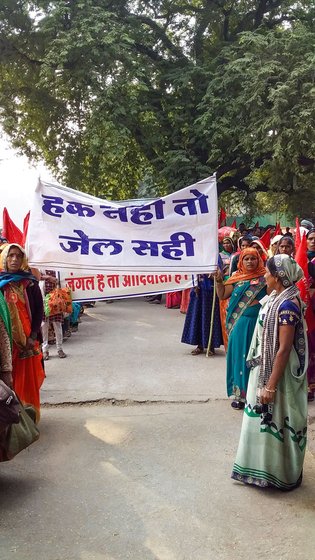 Left: Anar Singh Badole (centre) with other members of the Jagrit Adivasi Dalit Sangathan at Gurudwara Rakab Ganj Sahib in central Delhi on the morning of the November 21 rally. Centre: Groups from Chhattisgarh and Madhya Pradesh marching to Jantar Mantar. Right: Adivasi women are often the first to encounter the force of the forest department while accessing their community forest resources. Many persist and lead both the legal and everyday struggles for forest rights, as they did in Delhi too, some holding banners that said ‘ Hak nahi to jail sahi ’ (‘Give us our rights or put us in jail’)

At the rally, organised by the Bhumi Adhikar Andolan – an umbrella group of land rights organisations and people’s collectives across India – Badole’s account was as common as it was moving. At least 2,000 people participated (the organisers put the number at 5,000) from various states of India, and each community had a story to tell about its encounters with the forest department.

These range from their consent to development projects being obtained under duress to unlawful detentions, burning of crops, and forced evictions to make way for highways, big dams, cash crop plantations, mining and other projects.

In the process, the Adivasi communities are also denied revenue from community forest resources and grazing rights, and their forest rights in so-called protected conservation zones are suspended. Their anger at being regarded as encroachers on land inhabited by their ancestors was evident at the Delhi protest.

These accounts were punctuated by stories of successful struggles against coercive forestry governance in states such as Andhra Pradesh, Maharashtra and Odisha. These struggles have drawn heft from the legal protections of the Scheduled Tribes and Other Traditional Forest Dwellers (Recognition of Forest Rights) Act, or the Forest Rights Act (FRA) of 2006.

As have the people of Himachal Pradesh. At the rally, Prakash Bhandari of Palampur town in Kangra district, spoke of the increasing awareness in his state of the guarantees of the FRA. In Kinnaur district, for example, Adivasi communities are using the law to resist the Integrated Kashang Hydroelectric Project, which threatens their livelihoods and the ecosystem. Bhandari works with an NGO that focuses on the forest rights of communities. "No major development project can take place here without overlapping with forestland…" he says, in a state where over 60 per cent of the land is covered by forests. "This is why it is important, both for the region’s environment and people, that their forest rights be recognised.” 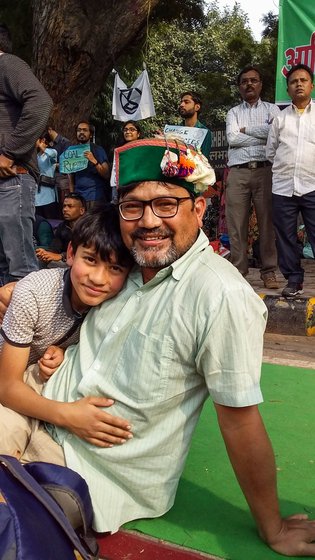 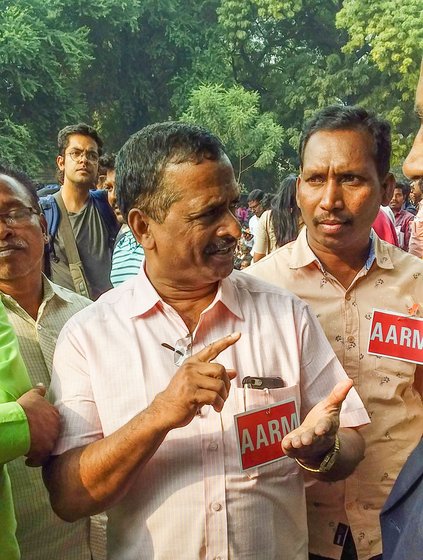 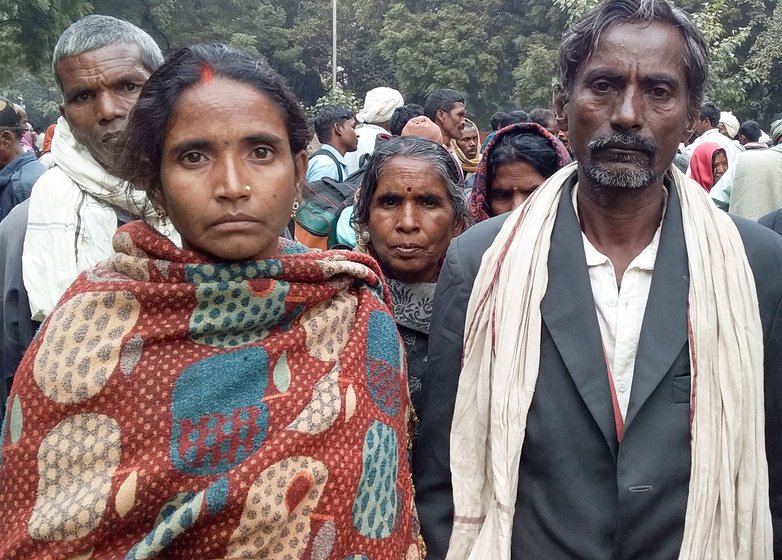 Left: Prakash Bhandari of Palampur town in Kangra district with his eight-year-old son, Abir. Centre : At the rally was also R. Narasimhan, from Visakhapatnam district, with other members of the Andhra Pradesh Girijana Sangham. Right: Ram Lakhan and Phuleri Devi from Baghauri village in Uttar Pradesh's Robertsganj block have various charges against them, including destruction of turtle habitats. As protectors of the environment themselves, they say these are false allegations

Among the people at the rally was also R. Narasimhan, who works with the steel ministry. He is from a Fifth Schedule Area in Visakhapatnam district. With him were people of the Andhra Pradesh Girijana Sangham. “Tribals are protecting tribals, we have to,” he says, “while the government is busy abolishing our indigenous traditions.” He is concerned that the displacement and pollution from bauxite mining in his area will further the collapse of villages and cultures of the Lambadi and Konda Dhoras Adivasis in the district. Fifth Schedule Areas are predominantly tribal, and given special protections by the Indian Constitution. Still, in 2015, the Ministry of Environment and the state’s forest department gave clearances for extractive mining to two major corporations. Sangham activists allege this was done in direct contravention of the Forest Rights Act, as well as without the mandated consultations with the state's Tribal Advisory Council.

The main demand at the rally was the effective implementation of the FRA and its mandate of recognising both the individual and community rights of traditional forest dwelling communities. As many participants in the protest emphasised, the threat to their forest rights now also extends to the very existence of the FRA.

The Supreme Court court is hearing arguments on a petition challenging the constitutional validity of the FRA. If the court upturns the FRA, it could legalise the dispossession of over over a million people from Adivasi and other traditional forest dwelling communities.

Badole’s wife, Riyali Dawar, observes that the state’s actions against them increased after 2006. That year, she was separated from her 11-day-old baby and detained for 45 days in a faraway prison for protesting against evictions. She continues to fight, and at the Delhi rally chanted along with the others: ' o zameen sarkari hai, who zameen humari hai '('The state’s land is actually our land'). 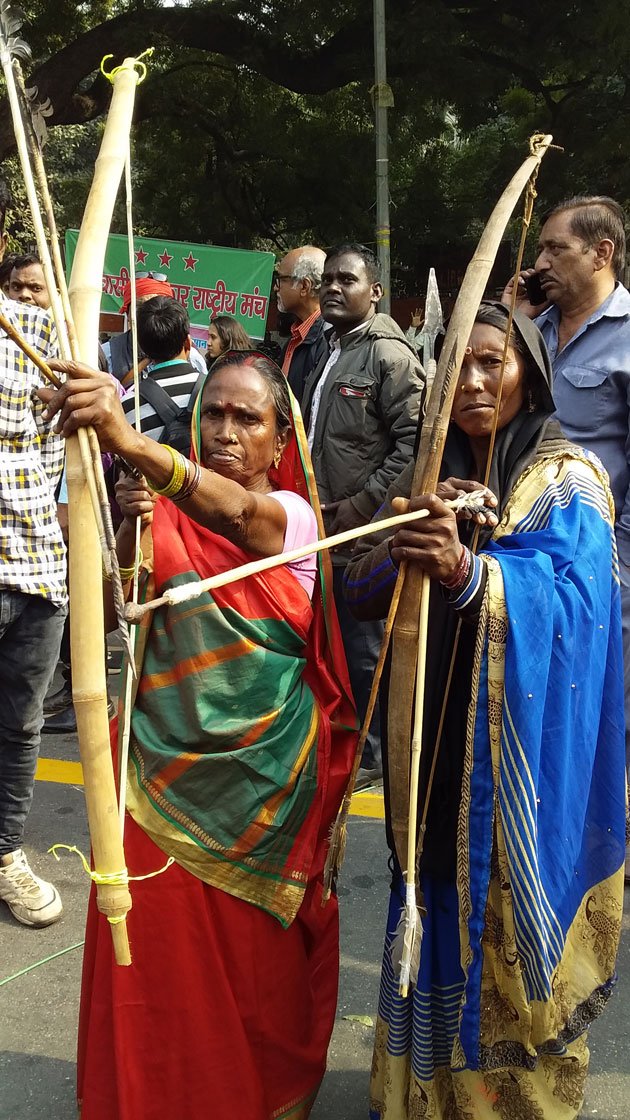 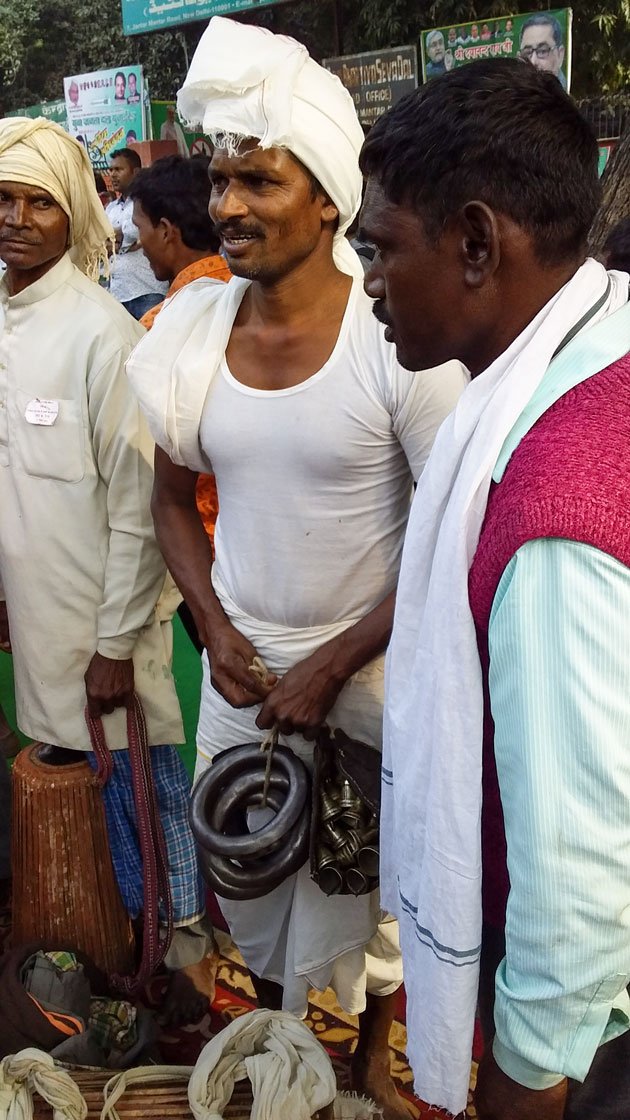 Left: Rajkumari Bhuiya (left) of Dhuma village in UP's Sonbhadra district with the traditional bow and arrows her Bhuiya community used to defend their land. She is a member of the All India Union of Forest Working People and a leader in organising her community to file claims to forest resources. Right: Rama Shankar, of the Gond Adivasi community in Lilasi Kala village in Sonbhadra, set the momentum with his music

Still, the united forest people’s movement has brought two significant victories. An early and major petitioner – the Wildlife Trust of India – has withdrawn from the anti–FRA case. And the Ministry of Environment, Forest and Climate Change has withdrawn the proposed amendment to the Indian Forest Act (1927) that sought to grant forest officers the right to attack, and even shoot people it saw as encroachers or poachers.

On September 12, 2019, the Supreme Court permitted the intervention applications filed by community activists and others seeking to defend the FRA, formally making them parties to the Wildlife First & Others Vs the Union of India case. Given the central government’s reluctance to defend its own law, these are the only entities in this legal battle who seek to protect the FRA.

“The FRA is a constitutional provision, we won’t bear an insult to our Constitution,” says Nivada Rana about the petition in the Supreme Court. She is from Suda village in Uttar Pradesh’s Kheri district, one of two Adivasi petitioners in the case, and a leader of the Tharu Adivasi Mahila Mazdoor Kisan Manch. She says she cannot recall a time when the forest department wasn’t trying to harass residents of the villages that will be forcibly resettled by the Dudhwa National Park. The FRA – which extends forest rights to protected areas and requires prior informed consent of gram sabhas for resettlement – has helped in getting individual forest, land and habitation rights for many in her area. “We have fought for it [the FRA], and will continue to fight for it,” she says.

A version of this article was first published by the Oakland Institute on November 24, 2019.