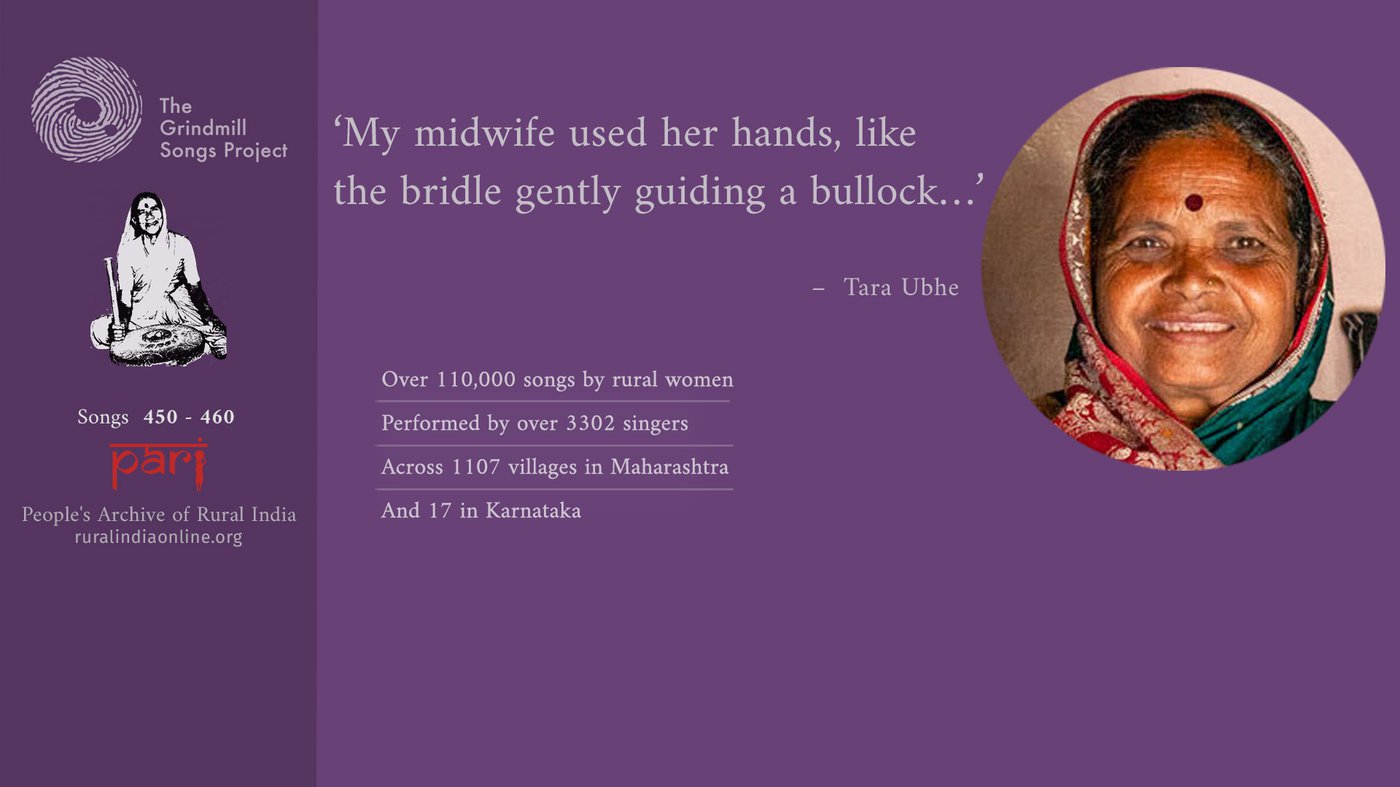 The village midwife is ‘no ordinary woman’

Tara Ubhe, from Mulshi taluka , Pune, talks about the inception of the Grindmill Songs Project, and sings a few ovi on the importance of midwives and the loss of their invaluable knowledge

“What exactly is a woman? Is she a toy or an object? If she is a living being, then we must think about her life, isn’t it? But for long, a woman’s life has not been treated as human existence. Some people call women ‘chulichi rakh ’ [ash of the kitchen stove] or ‘kandyachi paat ’ [green stems of spring onions]. Do we regard a woman as a human being?”

Tara Ubhe’s questions, like her penetrating eyes, compel a listener to think. We met her in February 2022 at her home in Khadakwadi, a hamlet in Kolavade village, about 40 kilometres from Pune city. She told us about her work as a grassroots leader in the villages of Mulshi as a member of Garib Dongri Sanghatana, an organisation that works among the poor in the hilly tracts of Pune district. She also spoke about the inception of the Grindmill Songs Project and its early days, when she and others collected songs for it.

The Garib Dongri Sanghatana (GDS) was formed in 1975 by social scientists Hema Rairkar and Guy Poitevin. Tarabai and a few women from Kolavade and other villages met them in the mid-1980s, and joined the organisation soon after. At the time, villages in Mulshi had no basic facilities like piped water, electricity or pucca roads. Led by Tarabai and other GDS members, women's groups tackled these problems by taking out protest morchas and demanding that political leaders act on these issues. Another concern, which they decided to get rid of, was alcohol addiction among the village men. “They filled alcohol in cans and big drums. We stopped them in their path and broke those drums,” Tarabai said. “There were some liquor shops beyond the school. We took a morcha there and destroyed those shops.” 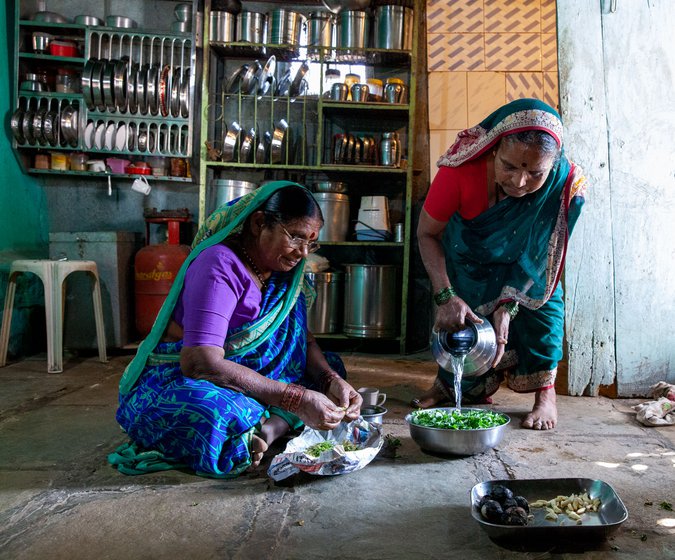 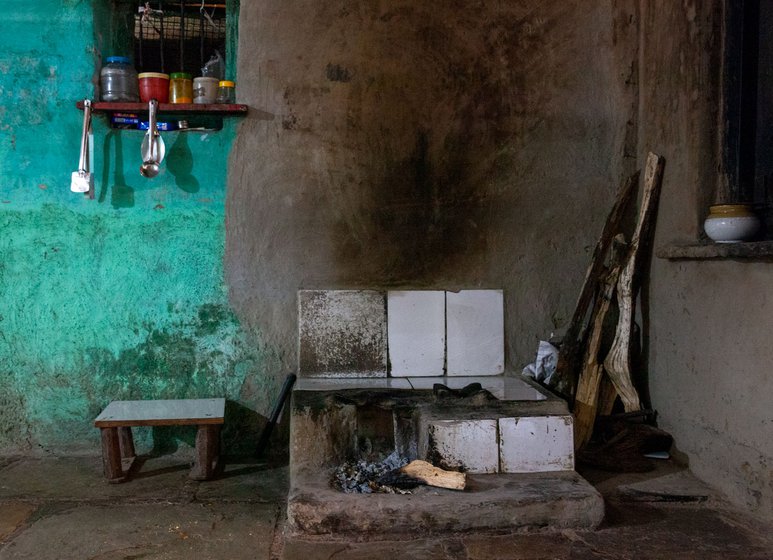 Left: In Tara Ubhe's kitchen, Lila Kamble and Tarabai prepare to cook methi leaves. Right: A wood fire stove in the corner of the kitchen

They also addressed the issue of caste discrimination and the practice of untouchability towards people from the Harijan Vasti, the Dalit settlement in their village. Tarabai told us about employing Lilabai Kamble, another member of GDS and a singer of grindmill songs, who is Dalit, to work as a cook in her home. Tarabai’s new house was being built then, and the workers constructing the building, who belonged to the Maratha community, refused to eat the food cooked by Lilabai. But over time, Tarabai’s insistence paid off. They dropped their reluctance and accepted the food cooked by Lilabai. The Dalits live in Harijan Vasti even today, away from the rest of the village . Their struggle for equality continues.

None of these activities were at all easy for the women. In the ’80s, women in the village, a majority of them Maratha, were not allowed to step out of their homes.

Tarabai’s husband, Sadashiv, used to work in a textile mill in Mumbai. When he returned home after a workers’ strike forced the closure of the mill, Sadashiv’s elder brother and his wife told him and Tarabai to leave the family home. They were opposed to Tarabai’s activism. The couple then worked as labourers for some years to steady themselves. They own an acre of farmland now, where they grow paddy, millets and wheat. Their three sons live in Pune with their families. 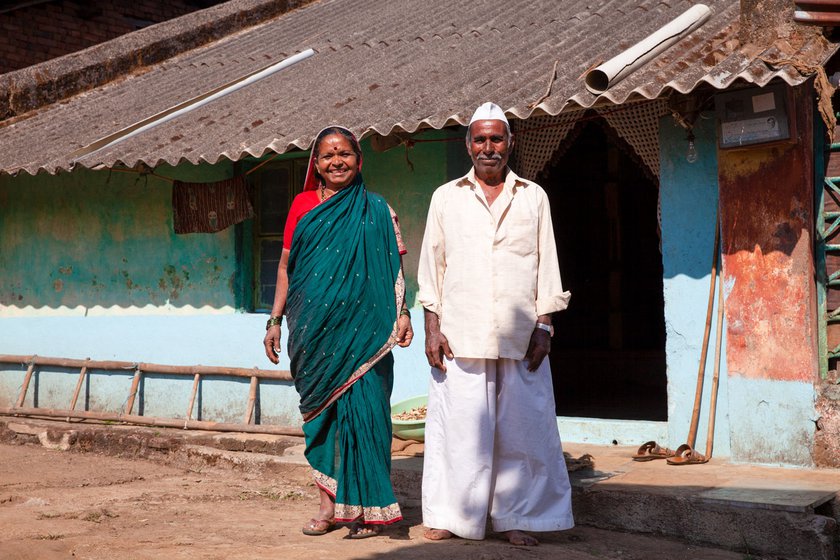 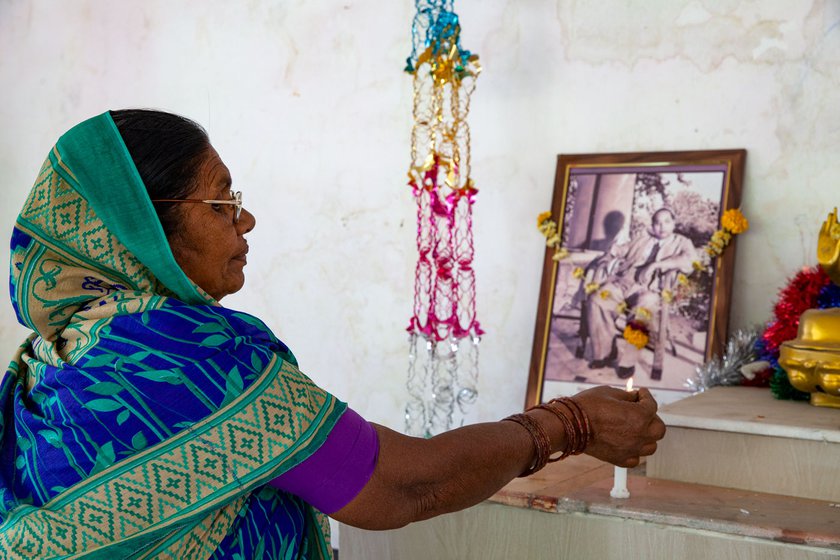 Left: Tarabai and her husband, Sadashiv Ubhe, outside their home in Khadakwadi. Right: Lilabai lighting a candle in the Buddha Vihar in Harijan Vasti

A group of women from Kolavade including Tara Ubhe and Lila Kamble, and Kusum Sonawane and some others from Nandagaon, went to Pune city to get trained by Hema Rairkar and Guy Poitevin in organising people under the GDS. “Women from other villages opened up to us when we talked to them about the everyday challenges we faced just like they did too,” said Tarabai, who has led such activities in about 18 villages including her own. She and the others found that one of the best ways to get women to open up was by singing grindmill songs. “Every woman had her sorrows to share, but she needed the freedom and space to confide in someone. That someone was the grindmill where she worked every morning.”

The grindmill is nothing but a sage from the mountains
I tell you my daughter, bare your heart to him

The Grindmill Songs Project (GSP) began in Mulshi in the 1980s and then spread to other parts of Maharashtra, covering over 1,100 villages.The team collected more than 110,000 songs over the years.

In March 1997, a group of grindmill song singers met in Pabal village, in Pune’s Shirur taluka , to discuss the many issues that they had to confront. There they talked about one of their major concerns: midwives in rural areas. With no easy access to hospitals and lack of medical help in emergencies, the midwife was a blessing to a pregnant woman who needed support during childbirth.

A midwife learnt by watching other midwives – usually her mother, aunt or grandmother. No qualified medical doctor could match the wisdom and experience of some these women, Tarabai said. So she and a few others composed many ovi about the role of a midwife and her expertise. Over time, the songs lapsed from Tarabai’s memory. Jitendra Maid from the PARI GSP team, who is also a member of GDS, and Muktabai Ubhe, a neighbour of Tarabai and a singer, read out the lyrics and helped her recollect the songs.

Eleven such songs are presented in this instalment of the Grindmill Songs Project. They tell us about how, in the absence of hospital infrastructure, midwives taught themselves the skills required to deliver babies. But their work, and the knowledge they gathered, was not valued by the modern medical establishment.

A midwife was adept at her role, the singer of these songs says. Her hands were skilful enough to gently pull out a “cow stuck in the mud”. The lack of a hospital in the village meant that a midwife was the one person who could negotiate the birthing of a child easily, “like the bridle gently guiding a bullock”. The metaphors here express rural life on the one hand, but the songs also comment on social reality. The singer highlights that while a medical doctor had paid to study medicine at university, the midwife had observed and learnt from other women, and become an expert through her experience.

In the last ovi , Tarabai sings about the midwife who drops everything and runs the moment she is called to help – she is like God to rural women, and her skills are “golden keys” that deliver a child from the mother’s womb and bring it into this world.


The grindmill is nothing but a sage from the mountains
I tell you my daughter, bare your heart to him

Where did the midwife get her knowledge?
By practising it in the hills and valleys

My village is in the hills, we have no doctor over there
The midwife’s knowledge is of much use there

The midwife, my mother, is rich with her experience
She did not attend classes at any university for it

My first delivery will be very difficult for me
Keep my toe ring as mortgage, under the crown flower tree

Don’t call the midwife a simple, ordinary person
She is adept at pulling out a cow stuck in mud
with just her five fingers

O woman, there is no support in the hills and valleys
My midwife used her hands, like the bridle gently guiding a bullock

O woman, where is the God running so swiftly to?
With his golden keys, he delivers expectant mothers 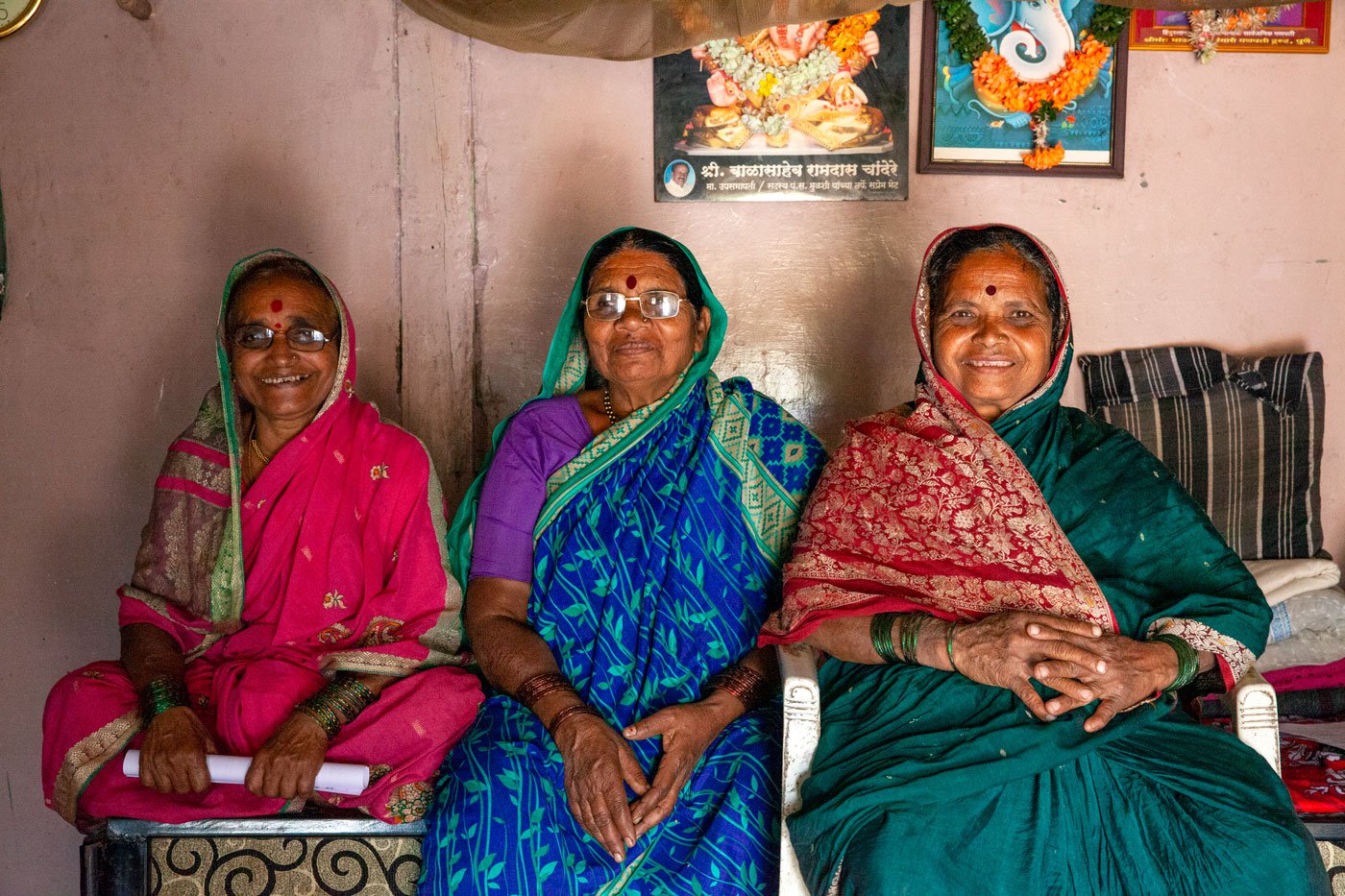 Children: Three daughters and a son