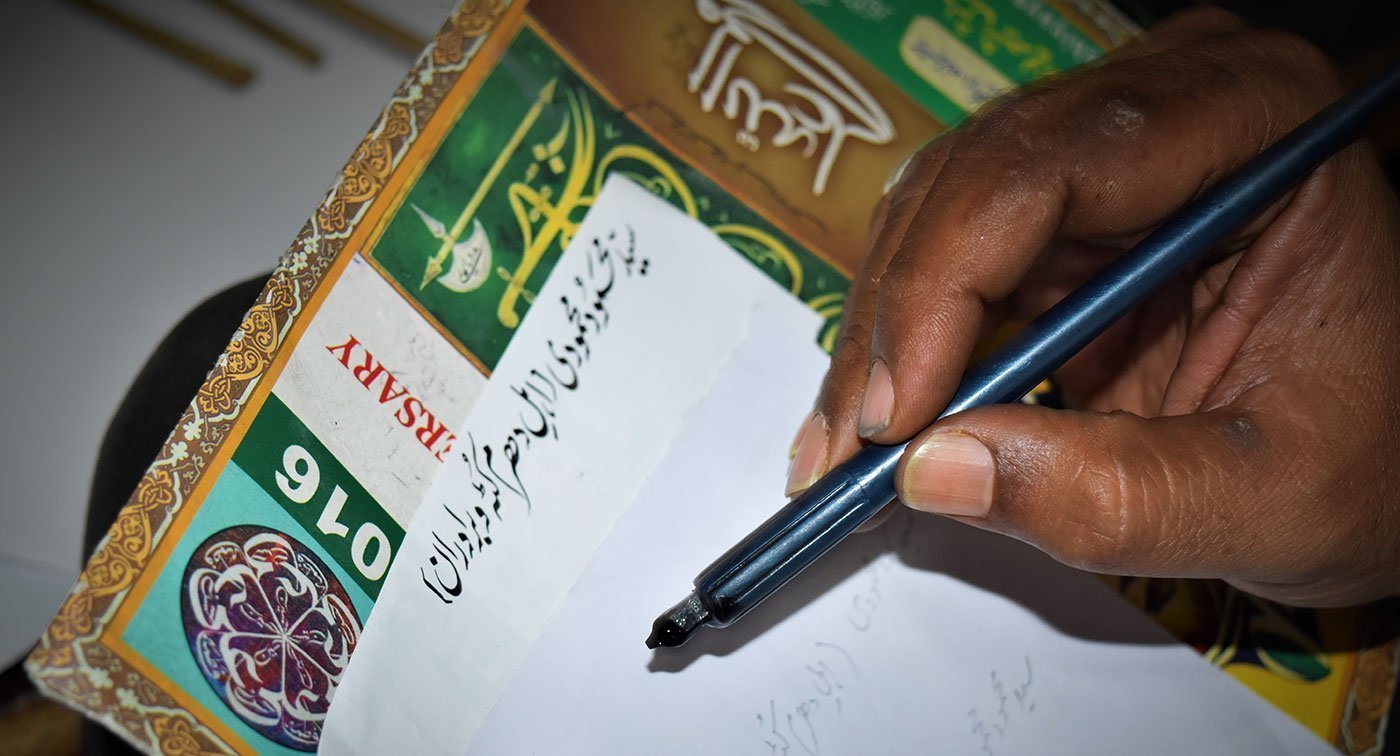 The Urdu calligraphers of Chatta Bazaar

Only a few calligraphers remain in Hyderabad, working on wedding invitations, logos and signboards, while many others have been edged out by computerised fonts, digital printing and a lack of state support

Colourful papers, wedding cards and posters are fastened with pins to a rope stretched across Mohammed Ghouseuddin Azeem’s shop. He uses a a qalam (pen) made of dried reed to write Allah in Urdu at the top of a white sheet of paper. He does this before anything else. “I have been a calligrapher for over 28 years. I mastered the art in Saudi Arabia while working there. When I came back to India in 1996, I opened up this shop,” he says.

Azeem, 44, lives in the centre of Hyderabad, and his shop is in Jamal Market, a three-story building in Chatta Bazaar near Charminar. It’s one of the oldest markets in the city, a hub of printing shops known for the distinctive centuries-old khattati (Urdu and Arabic calligraphy) practised here.

Khattati dates back to the time of the Qutb Shahi kings (1518-1687) in the Deccan. Historically, its practitioners (called khattats or kaatibs ) are said to have etched the Quran in Arabic and Urdu. Some of these handwritten Qurans are in museums in and around Hyderabad. Khattati can also be seen on monuments in the city built during the reign of the Qutb Shahi dynasty. People now seek out Urdu calligraphy or khush khat (good handwriting) mainly on special occasions and come to Chatta Bazaar in search of the master calligraphers. Urdu schools and madrassas also sometimes come here for designs for their logos.

Despite the activity around Azeem – workers shuffling papers, customers yelling, printing presses whirring – he works silently. “I call myself a practitioner of the art, though people call me a master calligrapher,” he says. “ Khattati is all about grammar. Every font, each alphabet has a grammar – the height, width, depth and spacing of every dot matters. The beauty of the letter depends solely on how you rotate the pen without compromising on the grammar. It is all about fine, deft hand movements.” 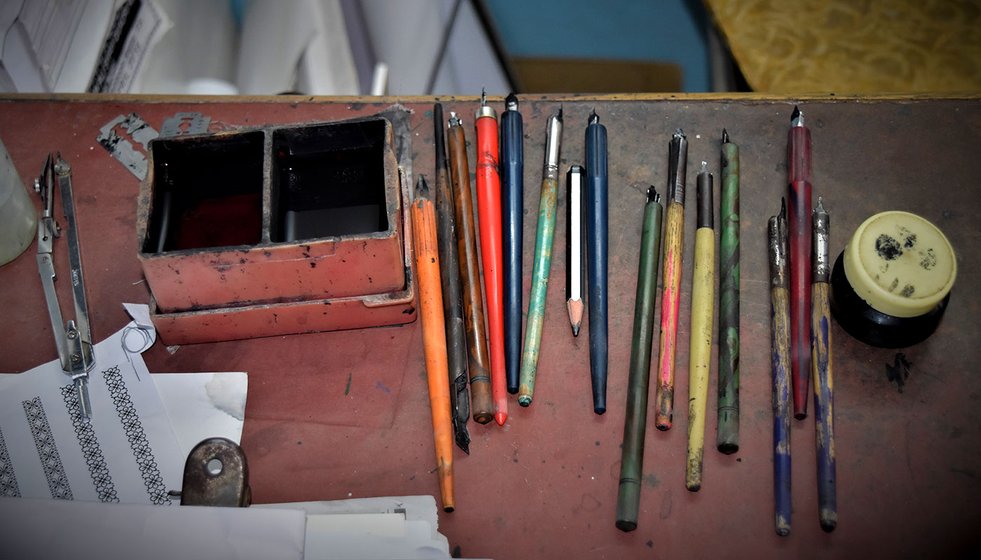 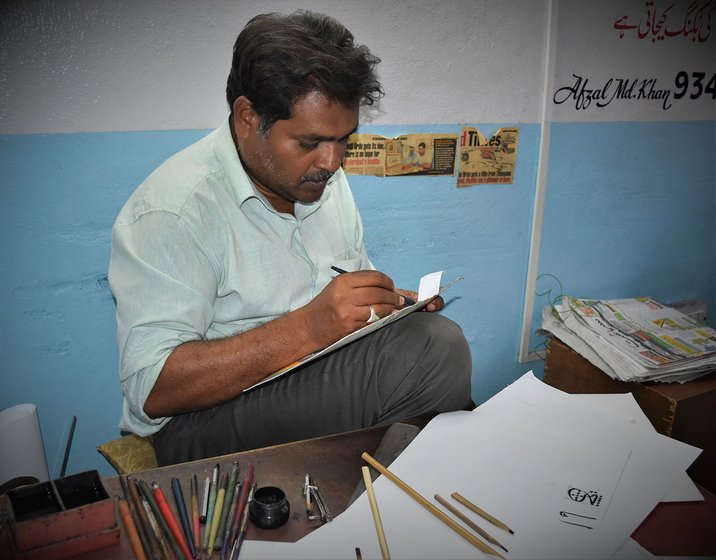 Mohammed Ghouseuddin Azeem at work: ' Every font, each alphabet has a grammar...'

Azeem, like other kaatibs at Chatta Bazaar, works for eight hours a day, six days a week “There are around 213 khattati fonts in Arabic. It will take at least 30 years to learn all of them and a lifetime to practise it to perfection," he says. "Even if you spend an entire lifetime on this art, it will be less.”

The calligraphers usually charge around Rs. 200-300 for a one-page design for a wedding invitation, which they make swiftly in around 45 minutes. Customers then make copies of this design at a printing press nearby.  With barely 10 kaatibs remaining in the Old City (according to their own estimates), on busy days, each one can get up to 10 design jobs.

Many, like Afzal Muhamad Khan, 53, who lives in Ghanzi Bazaar near Charminar, gave up this work in the 1990s. “My father Ghouse Mohammed Khan was a master calligrapher in his time,” he says. “He used to teach hundreds of students at Idara-e-Adabiyat-e-Urdu [a calligraphy training centre in the Panjagutta area of Hyderabad city]. We used to work together at Siasat [an Urdu daily]. But when the computers came, I lost my job and I started working in advertising. This art will be dead in a few years. We are the last line [of practitioners],” he says with a resigned look. 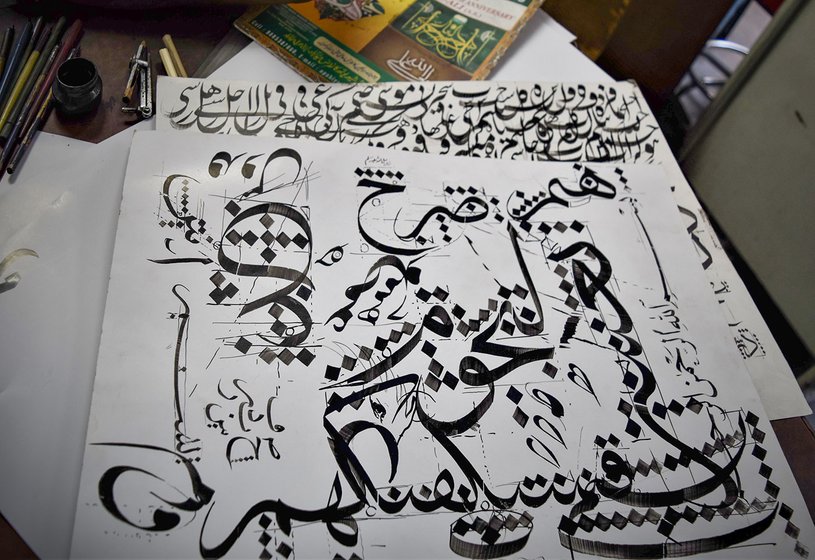 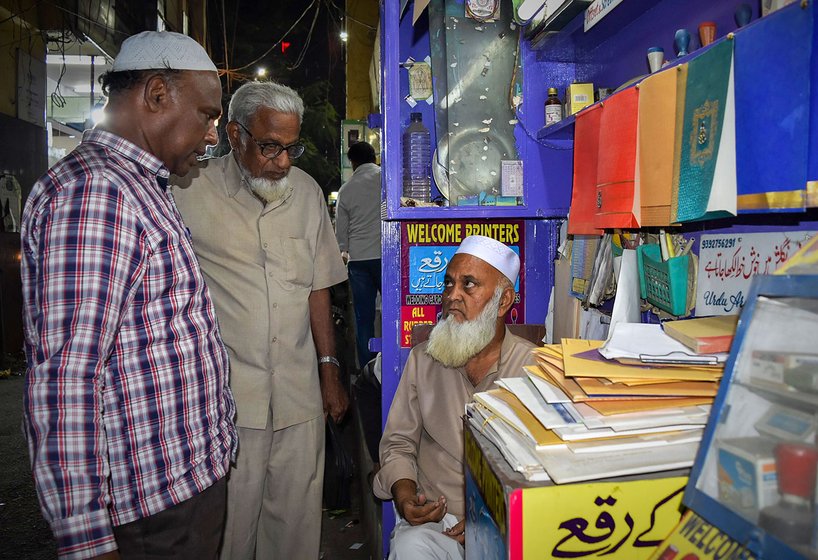 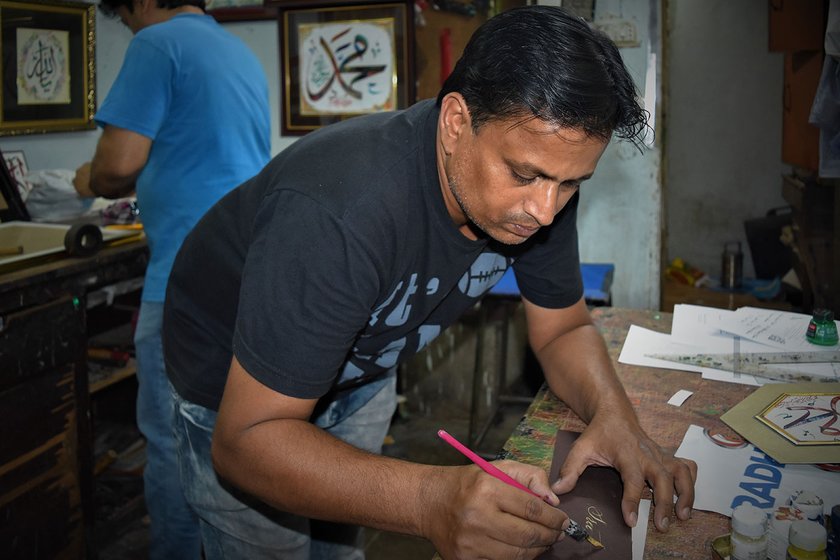 Left: A calligraphy draft at a shop in Chatta Bazaar. Centre: Muhammad Abdul Khaleel Abid, 63, started his shop, Welcome Printers, after he lost his job at the Siasat daily in 1992. Right: Muhammad Faheem and Zainul Abedin inherited the calligrapher's art from their father

By the mid-1990s, Urdu fonts became computerised and customers started to turn to digital printing. As a result, the demand for calligraphers fell steeply. Newspapers like Siasat went digital too and retained only one or two calligraphers to write some of their headlines. The others lost their jobs, and a few opened small shops in Chatta Bazaar and started doing calligraphy on wedding cards, logos, posters and signboards.

The calligraphers say that with little government support to preserve this art form, khattati is in a dismal state and in danger of vanishing. Besides, not many young people are interested – the few who study it usually give up because of the effort calligraphy demands, while others see it as a waste of time with a bleak future.

But Muhammad Faheem and Zainul Abedin, both in their late 30s, are exceptions. Their father Muhammad Nayeem Saberi, who passed away in 2018, was an expert calligraphist, and among the first to use multiple colours in Urdu and Arabic calligraphy, his sons and others at Chatta Bazaar tell me. He set up the shop that the sons run now – and besides Urdu and Arabic, they excel in calligraphy in English too. The brothers have overseas clients to, in Kuwait, Saudi Arabia and other countries, for whom they make, on occasion, large frames with Urdu calligraphy.

As the work day nears an end at Chatta Bazaar, the calligraphers arrange their qalams (pens) neatly, put their ink boxes away and offer namaz before going home. When I ask Azeem if the art will disappear soon, he responds with alarm. “Don’t say that! Till our last breath, we will struggle but keep this going.” Pasted on the wall in his shop, a clipping in an English newspaper of an article on him is worn out and fading, perhaps like his art.

A version of this article was published in ‘UOH Dispatch’, a University of Hyderabad journal, in April 2019 .