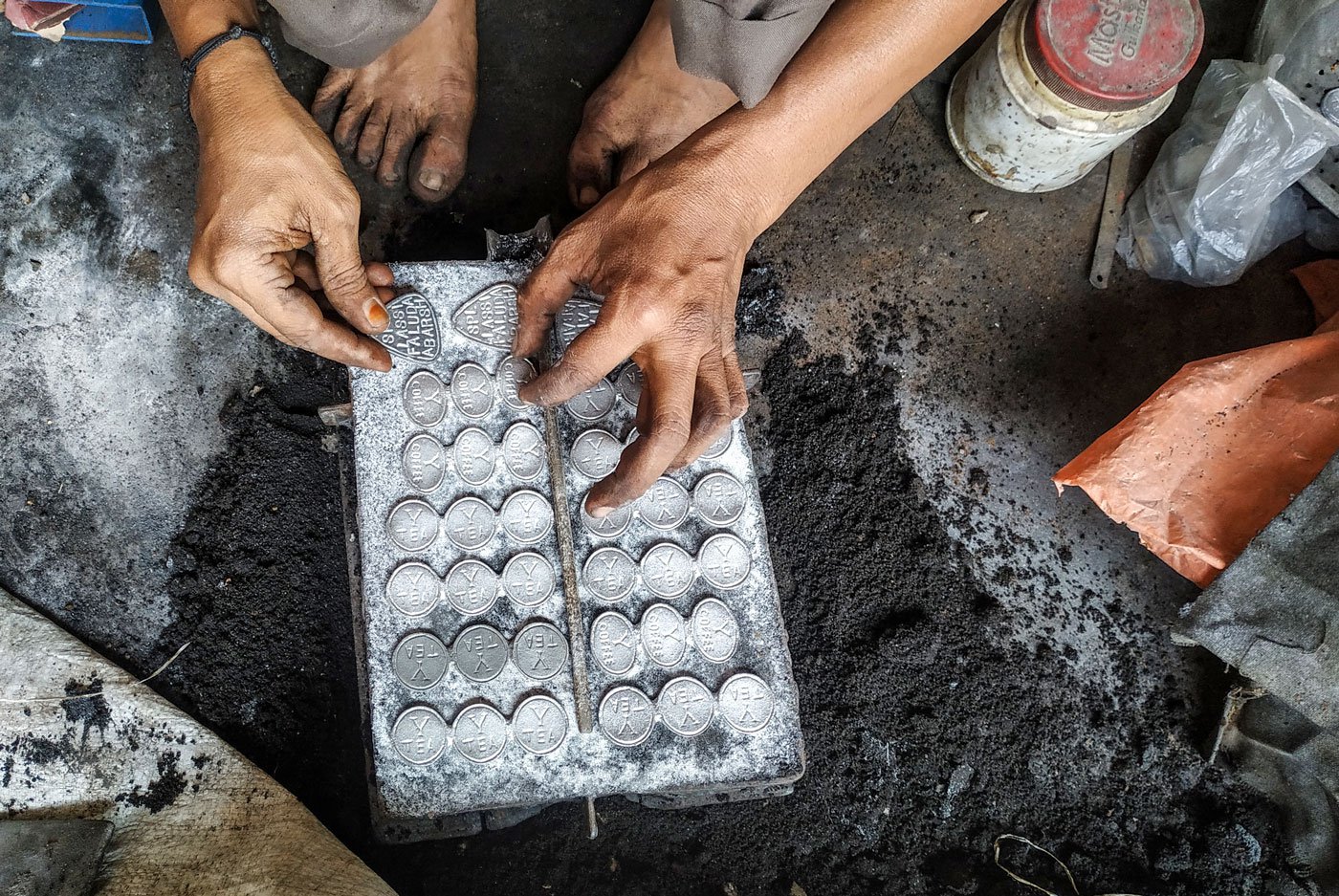 With the expanding use of plastic tokens and paper receipts, Mohammed Azeem is now among the last few craftsmen in Hyderabad still moulding metal ‘canteen coins' for a few old tea shops and eateries

There is no name board above the workshop. “ Yeh to ek gumnam dukaan hai [It’s just an anonymous shop],” says Mohammed Azeem. Inside, the 8x8 feet shed’s asbestos walls are covered with soot and spiderwebs. A small iron and mud furnace stands in a corner, a heap of burnt black soil covered with blue tarpaulin lies at the centre.

Every morning around 7 a.m. Azeem cycles through the narrow lanes of Doodh Bowli in west Hyderabad, and parks his bicycle near this workshop, its rear wall merging into the compound wall of the Hakeem Mir Wazir Ali cemetery.

Here, amid dusty plastic containers, rusted metallic boxes, broken buckets, and tools and punches scattered on the floor – with barely any space to work – he begins his workday, painstakingly making sand-cast metal tokens.

A few old tea shops and eateries in Hyderabad still use these tokens (or coins) that 28-year-old Azeem makes. In the past, similar canteen tokens were used by mills, military outlets, railways, banks, clubs, cooperatives and various other establishments. But over time the demand has steeply fallen with people shifting to plastic tokens or paper receipts. The few Hyderabad restaurants that still rely on metal tokens use them to calculate the day’s earnings: once customers order a food item, they are given tokens that correspond to that dish.

Ajju, as Azeem is called by family members and other shopkeepers, estimates he is one of the last few – less than 10 remain in Hyderabad – craftsmen in the city who still specialises in moulding these coins. 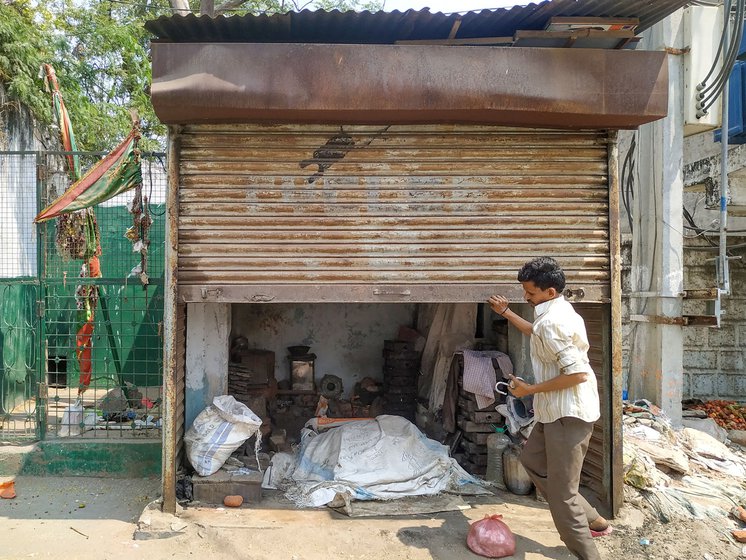 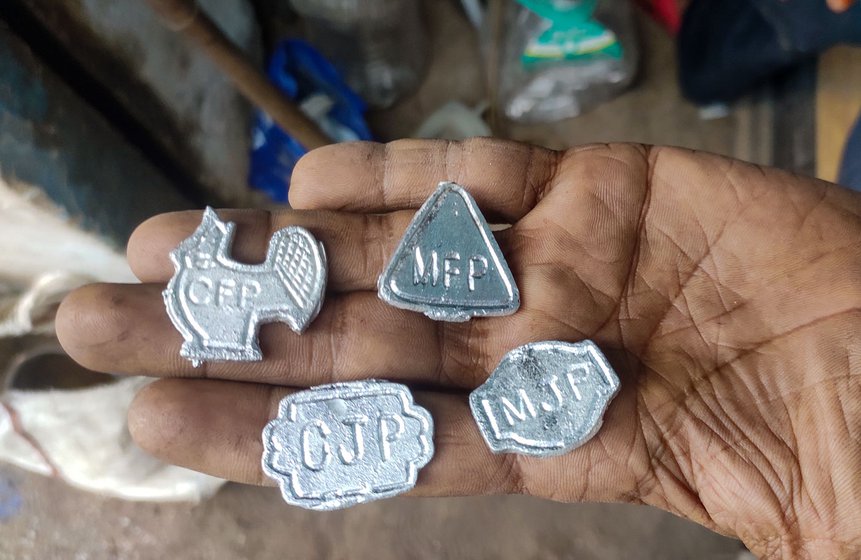 Every morning, Azeem parks his bicycle near the shop and begins his workday, moulding tokens with inscriptions or shapes of the dishes sold in eateries

“We specialise in making these coins and shopkeepers from all over Hyderabad used to come here to buy them. But now there’s little business,” says Azeem’s uncle, Mohammed Raheem, a traditional moulder himself, who is in his 60s.

Azeem’s grandparents also did casting work, he says, and made tokens and ornamental items for the palace during the reign (until 1948) of the last Nizam of Hyderabad. And they would create metal showpieces for homes. Raheem says he also made small plates engraved with the names of bicycle owners, which they would hammer into their cycles. Azeem shows us a metal plate for a cycle that his father had made years ago.

Azeem’s father, Mohammed Murtuza, was a master coin-maker, sought after by everyone in the locality. But decades ago, before Ajju was even born, Murtuza injured his right arm in a furnace blast and it had to be amputated.

Still, Murtaza and Raheem carried on their parents’ legacy. Azeem doesn’t remember how old he was when he first started casting; he studied till Class 4 and says his father pulled him out of school after he fought with a friend. Coin-making, he adds, is the only work he knows. 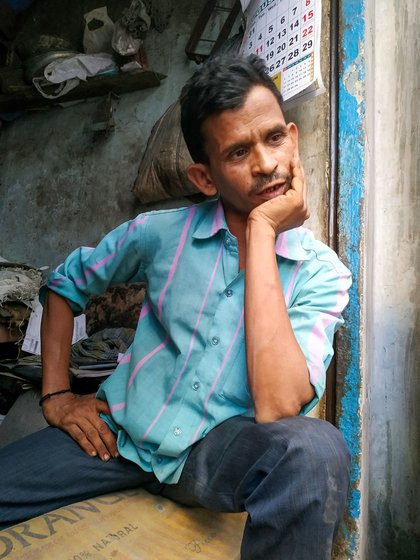 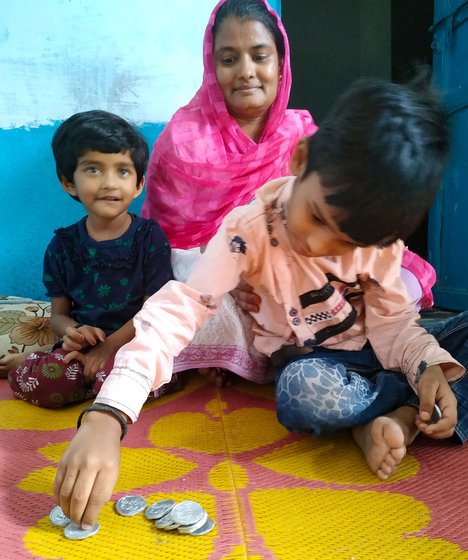 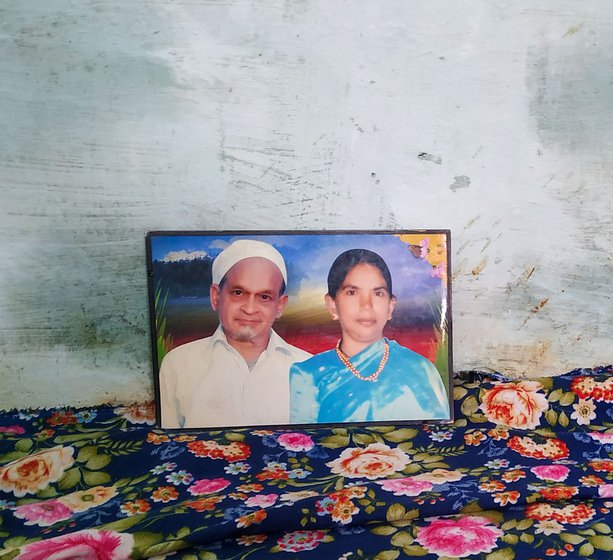 Moulding tokens is a family tradition: Azeem's wife Nazima (centre) would pitch in when they had a furnace at home. His father (right) was a master craftsman

Over the decades, the family has moved shop several times – driven out by demolition, by complaints of smoke from the furnace, by space constraints. They have worked from a shed near Charminar, from another shop near a small masjid in the Charminar area, and, at times, from their small three-room house, setting up a furnace in one room. Here, Azeem’s wife Nazima Begum would handle the tasks of collecting soil from nearby grounds, sieving it, filling it into moulds.

During the lockdown that began in March 2020, Murtuza’s savings from his disability pension of Rs. 2,000 a month helped sustain the family. Azeem’s three sisters are married and homemakers, and a younger brother does welding work in a two-wheeler showroom.

Murtuza passed away in April 2020 (Azeem’s mother Khaja died in 2007), and the pension stopped coming in. So in November 2020, Azeem rented the shop next to the cemetery, the one he now works from, hoping to draw in more customers and bring in a better income. But the shed is on a pavement and could be taken down any time by city authorities, he says.

During one of my visits here, he had received an order from an eatery in Begumpet the previous day.

The first step, he says, is to choose an appropriate shape – say a tea cup or a fish – depending on the eatery’s specific order.  Invariably, he has a master token for these shapes, made long ago, in white metal. Then begins a precise multi-layered process of creating replicas. 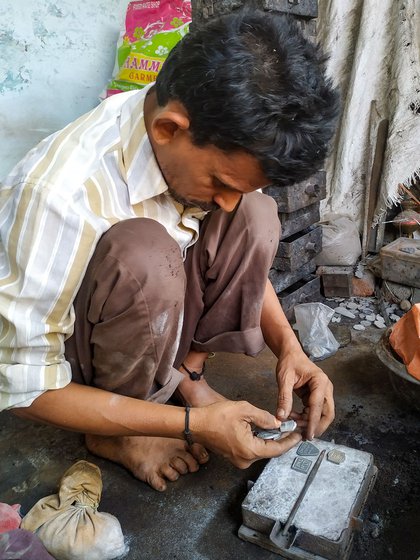 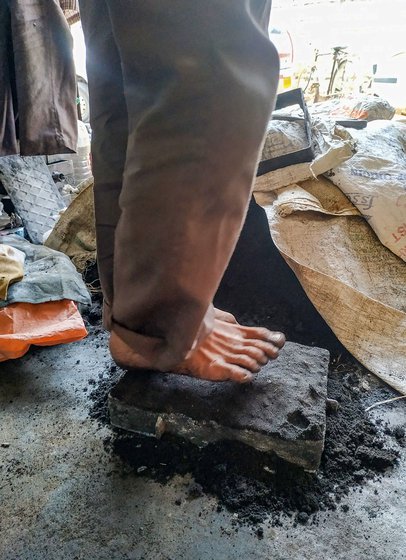 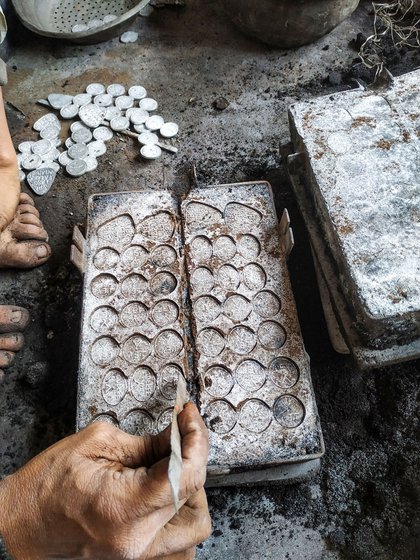 Left: Placing master tokens inside the mould. Centre: Stepping on the peti to compress the soil. Right: Refining the impressions, making way for the molten liquid

Azeem places a peti (metal frame or mould) on a wooden board and sprinkles some sanjeera (casting powder) over it. “The powder will prevent the coins from getting stuck to the sand [soil] particles,” he says. He then places the tokens of the desired shape one by one on the board.

He again fills one-fourth of the peti with fine soil mixed with a binding agent, a brown liquid made of jaggery. Any soil or sand will do, he says, as long as it is sieved to remove larger particles. The sticky mixture is added to the asthar mitti (base soil). On top he adds the black burnt soil residue from earlier casting works that’s kept covered under the blue tarpaulin.

Once the entire peti is almost full, Azeem steps on it to compress the soil. Then he flips the frame upside down. The shape of the coins is now embedded onto the mixture. The mould is covered with a lid, he sprinkles some more sanjeera powder on it, followed by more layering with asthar mitti and burnt black soil. He stomps on it again, by now his feet covered with mud and soot.

Then the excess soil is wiped off and the peti is opened. Gently, he removes the master shapes. They leave cavities with their engravings embedded in the soil mixture.

With a small stick, Azeem makes apertures for molten aluminium to pass through. With the stick, he evens out the soil inside the cavities to remove the engravings of previous orders – for example, the name of another eatery. He closes the peti and latches it firmly, places a wooden board on top, and then it’s time for the heat-casting. 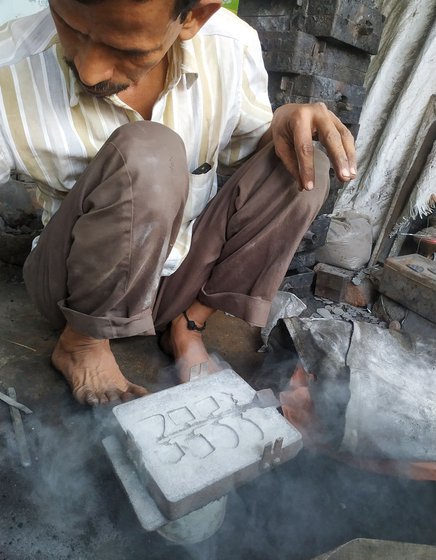 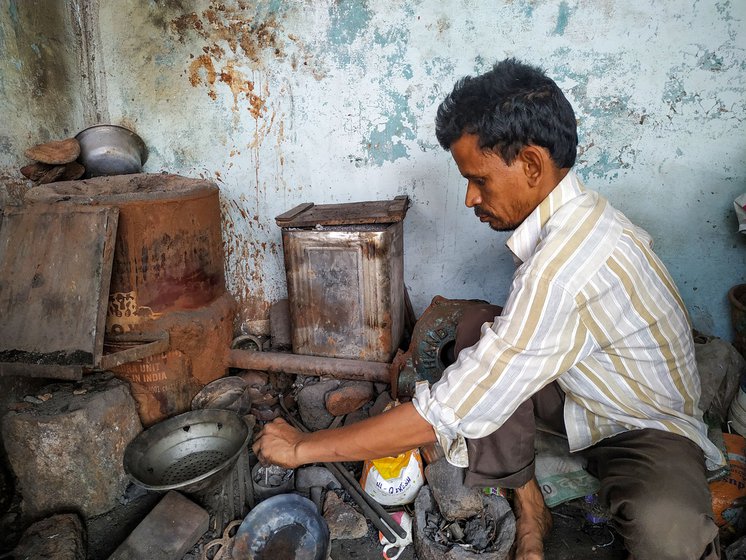 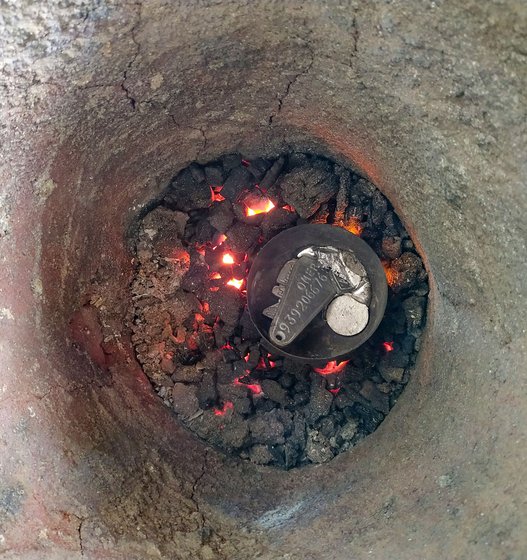 Left: After he has put sanjeera powder over the cavities before pouring in the molten metal. Centre: Operating the hand blower. Right: The metal pieces kept inside the bhatti for melting

Coal is loaded into the bhatti (furnace) using a hand-held blower. Once the coal is glowing hot, Azeem places a metal container inside with either old unused aluminium coins or solid pieces. When these melt, using a holder he pours the hot liquid into the peti . He does all this without any protective gear. “I have become used to working this way and all that equipment is costly,” he says.

The liquid metal soon solidifies, and within minutes the mould is opened to reveal the new tokens formed inside. He takes them out and sharpens the edges with a file. “ Yeh raha hamara coin ,” he says, holding the small metal object in his palm.

The next step is to engrave, in English, the name of the dish and eatery on the tokens. For this, letter and number punches have to be hammered into the freshly-minted aluminium tokens. Once a batch is ready, he uses those new tokens, with the updated engravings, to repeat the casting process.

“The number of coins [per batch] depends on the peti . I have 12 of different sizes,” he says pointing to a pile of frames. In a medium-sized 15x9 inch peti he can make around 40 tokens at one go. Working for 10 hours, if there are many orders, he can make up to 600 coins a day. 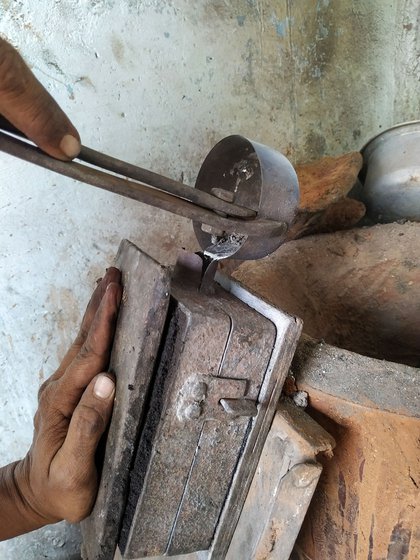 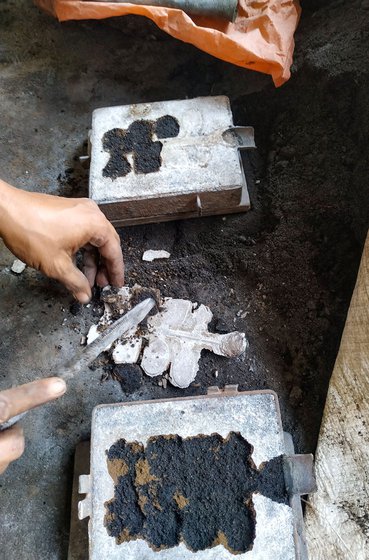 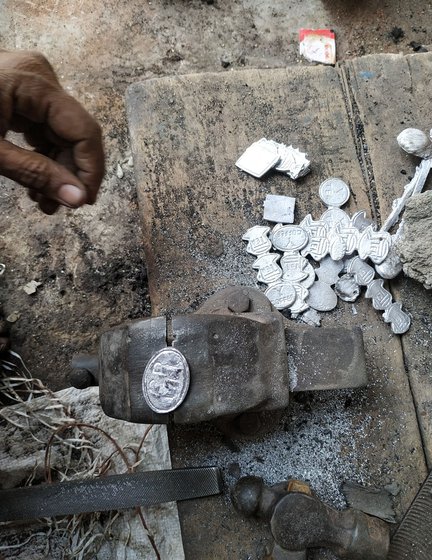 Left and centre: Taking out the newly minted tokens. Right: Separating and refining the tokens and shaping them using a file

If, in rare instances, a new design is to be made for which there is no master coin in white metal, Azeem’s customers are asked to bring a 3D plastic replica. But these are costly, so most customers prefer to repeat old designs. (When Azeem’s father Murtuza did the casting work, he would forge new shapes and designs by hand.)

Metal coins last longer than plastic ones and are less expensive, says Muhammad Moheen, who works as a waiter at a hotel in Begumpet, around 13 kilometres from Azeem’s workshed. He has come to give an order. “It’s a manual system of counting and our customers also prefer it,” he adds. “We keep 100 coins for each dish. Once these are used, we know that 100 servings of that dish have been sold. That’s how we calculate the day’s earnings. We are uneducated people, so this system has stuck with us.”

And sometimes, people give orders and don’t come back to collect the tokens. Azeem shows us a batch kept on a top shelf. “I made these 1,000 coins but the customer never came back,” he says. After some time, he melts these unclaimed tokens and reuses them to make other coins. 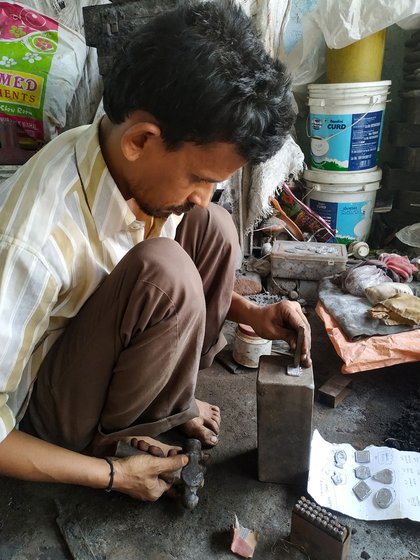 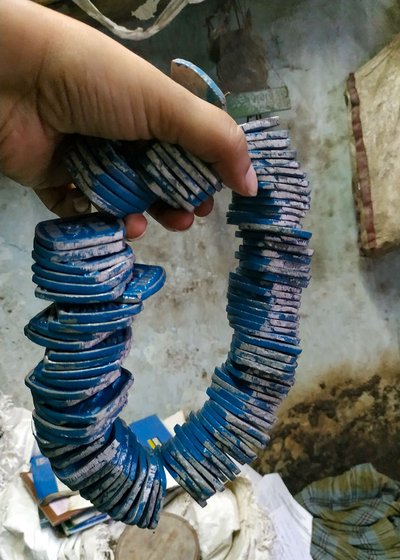 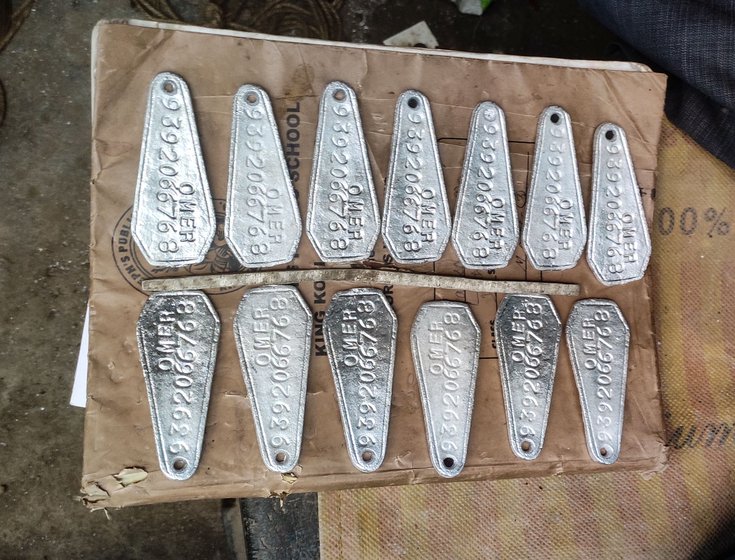 Left: Punching the letters on the token. Centre: One set of an order of 1,000 tokens that was not picked by a customer. Right: Azeem shows us how a batch of the tokens will be arranged inside the peti

A large portion of his earnings, Azeem says, goes into the rent for the two shops – Rs. 800 for the old shop near the masjid (which he still retains since it’s a way to bring in customers and because of the low rent in a prime locality) and Rs. 2,000 for the asbestos-workshed near the cemetery. “Every month, I have to also spend 6,000-7,000 rupees for school fees, groceries and other household needs,” he says. His younger brother pitches in with the family’s expenses.

By afternoon, Azeem usually returns home to Moinpura, around a kilometre from his shop. There is barely any furniture in the house, the cement floors are covered with plastic mats. “I don’t want my children to take up this work, it’s very dangerous with the furnace and hot metals,” he says.

“I want a secure future for my children, I want to give them the best education possible,” adds his wife Nazima, while their three-year-old daughter Sameera clings to her and six-year-old son Tahir plays in a corner. In his hand are several coins and a small iron hammer made for him by his grandfather.