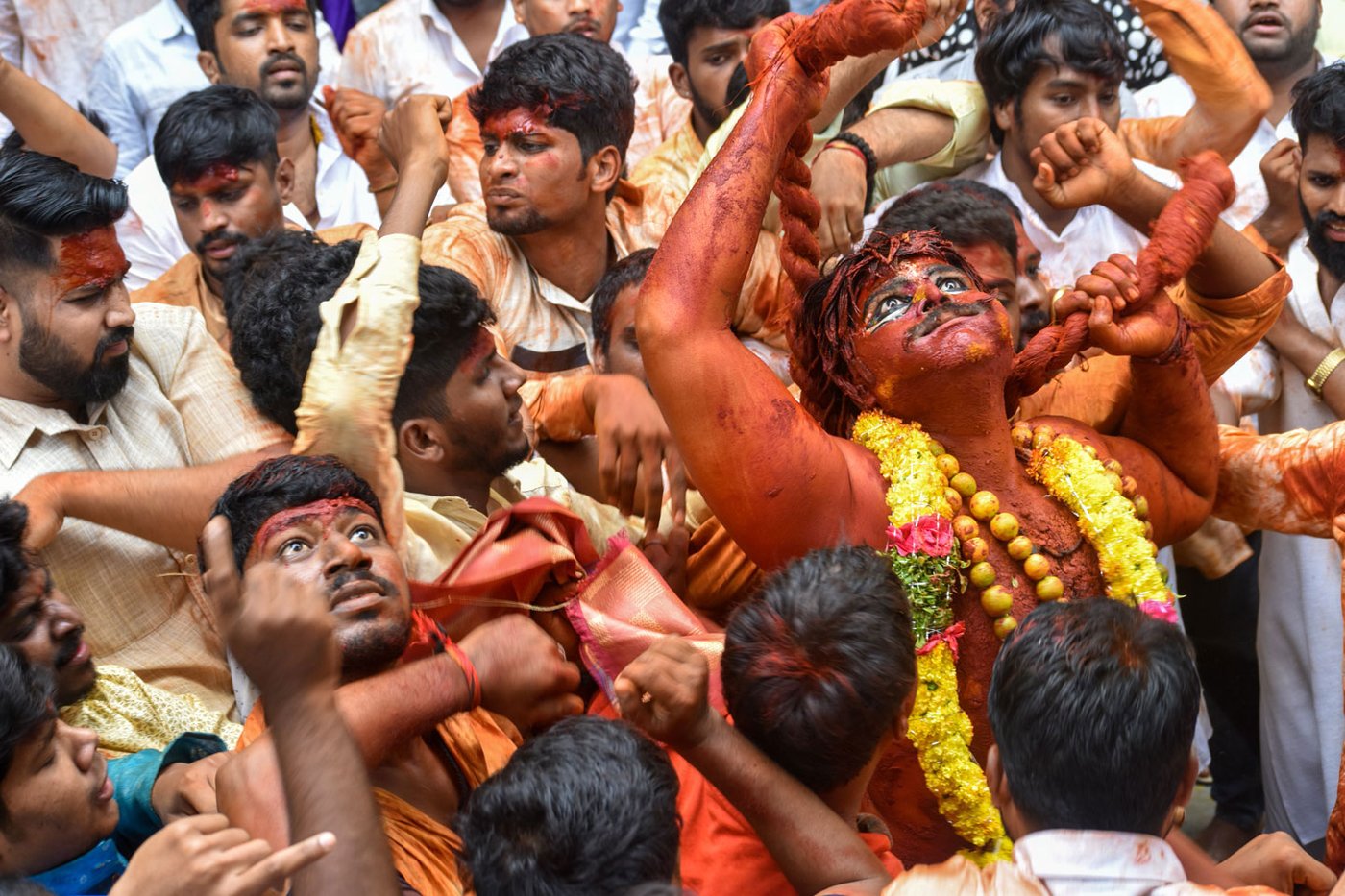 Fuming and fearsome, dancing and whipping

During the Bonalu festival every year, Posani Ashwin, an auto-parts dealer in Hyderabad, transforms into the Pothuraju, a deity believed to ward off diseases – 'possessed', he blesses and enthralls the crowds

When Posani Ashwin, 32 years old, left his family’s house around noon, he touched the feet of his 76-year-old grandmother, Posani Laxmi Amma, to receive her blessings. When he returned three hours later, utterly though temporarily transformed, she touched his. Between the two acts of reverence lay a century-old ritual that embodies the faith of a whole community – the Pothuraju tradition.

Devotees standing on the sidewalks and in the balconies of houses showered flowers on Ashwin when he stormed back home as the fearsome-looking Pothuraju, fully smeared with kumkum (vermilion) and turmeric, wielding a whip and fuming. When he entered the gate of Laxmi Nilayam in the Mekal Banda locality in south-east Hyderabad, he scattered the animated, cheering crowd by cracking his whip. Inside the house, he came face to face with his grandmother. She bowed and touched his feet with tears in her eyes. Ashwin’s terrified daughter, eight-year-old Shasra, still not used to seeing her father like this, hid behind her mother, Kavitha. Shasra’s elder brother, 10-year-old Rithwik, stayed away too from his father in his fearsome avatar .

“I am totally in a trance after becoming Pothuraju,” Ashwin says. “I have no power over my body. I act according to the goddess' will. Even when I am visiting my own home, I don't realise it. The goddess directs me.”

For five years now Ashwin has transformed into Pothuraju on the day of Bonalu – an annual festival in the month of Ashada (June-July) in the state of Telangana, dedicated to Goddess Mahankali. The festivities begin at the fort of Golconda, around 12 kilometres from Mekal Banda, and occupy four Sundays in various parts of the city. 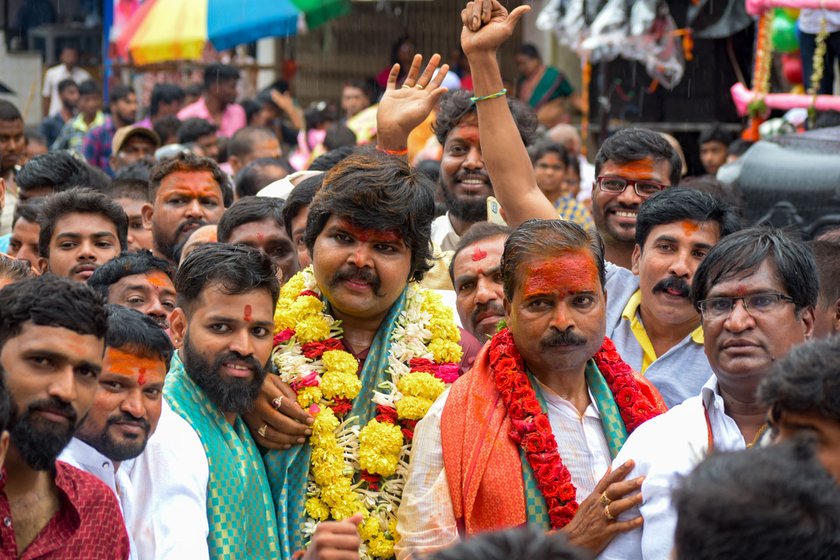 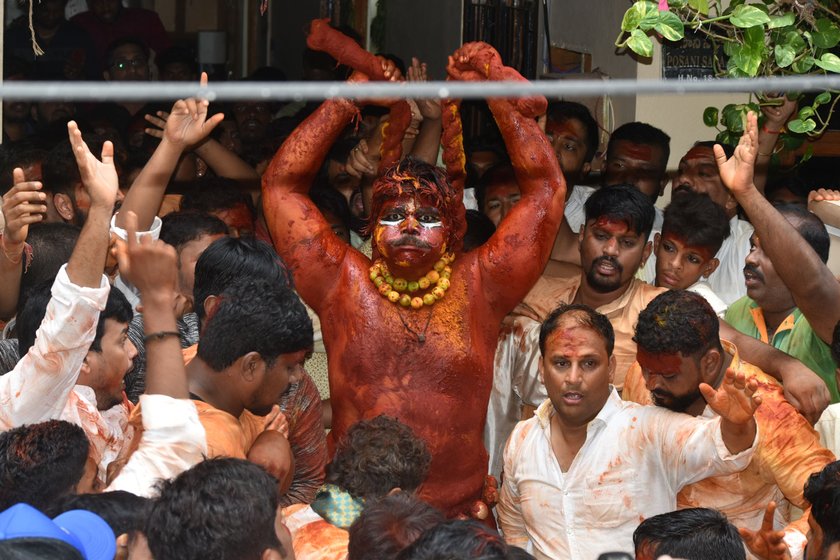 Left: Ashwin and his father Babu, coming out of the temple; Babu toowas Pothuraju for two decades until 2013. Right: Ashwin emerges from his ancestral home, transformed

Ashwin is the head Pothuraju of the local Lal Darwaza Simhavahini Mahankali temple. “The Pothuraju [an incarnation of Vishnu, say some accounts say] is the protector of the Seven Sisters, the grama devatas , ” says 61-year-old Posani Babu Rao, Ashwin’s father, himself a Pothuraju from 1983 to 2013. The deities are part of the folk culture of the state. The seniormost is Mahankali, the festival’s central deity (say temple websites). Worshippers believe that the goddess wards off diseases. "The Pothuraju is the brother of the goddess,” Babu says.  He dances for two to five hours to make the goddess happy.”

The Pothuraju, he adds, also “protects women carrying bonam [to the temple].” In Telugu, ‘ bonam’ means ‘meal’, and the name of the festival, Bonalu, is derived from this word. As part of the tradition, women cook rice with milk and jaggery in a new earthen or brass pot. The pot is adorned with neem leaves, turmeric and vermilion. Women and girls carry these on their heads and offer them with bangles and sarees to the goddess at the temple.

For Ashwin, the preparations begin 15 days before Bonalu. During this time, he does not consume non-vegetarian food and alcohol, and immerses himself in prayers. Eight days before the festival, the temple priest begins a series of pujas of the ghatam (a copper pot decorated in the form of the goddess) kept inside the temple.

On the day of Bonalu, the temple committee members visit Ashwin’s house (a few metres away from his family’s house) and escort him to the temple, accompanied by a percussion band. The walk, amid crowds of devotees, takes around half an hour. At the temple, Ashwin seeks the blessing of Goddess Mahankali – Kali seated on a lion. The priest hands over the bhandar ( kumkum , turmeric, coconut oil, and a garland of jasmine, rose and marigold flowers) to him. One of his family members, the ‘ bhandari’ , carries these materials. “The temple provides me with the materials. I am the only officially appointed Pothuraju in the temple. You can find other Pothurajus during the festival, but none of them are from our family. They do it for fun and even pose for selfies,” says Ashwin. 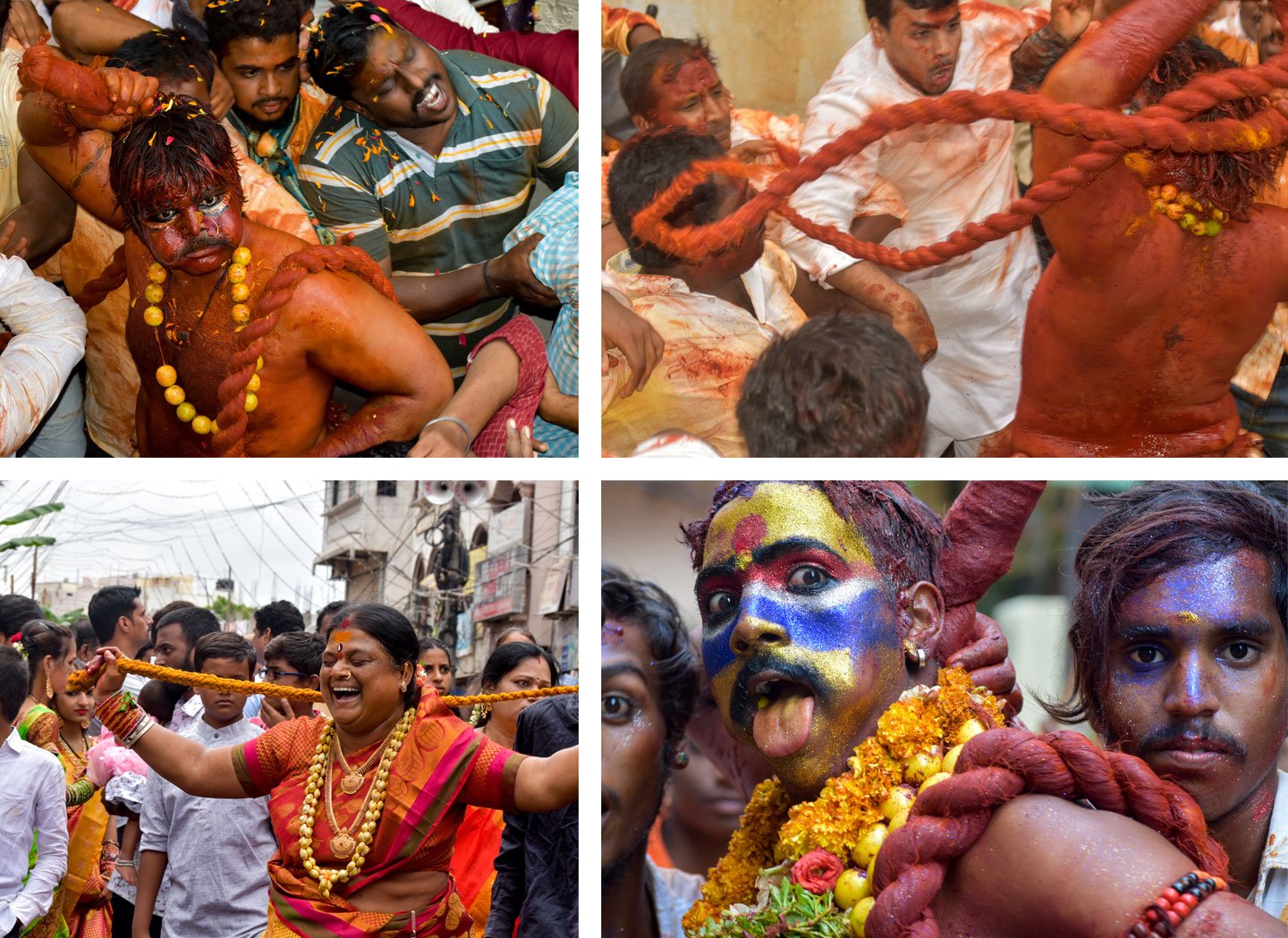 Top row: Ashwin as Pothuraju, surrounded by devotees. 'Getting whipped by the Pothuraju [people believe] wards off diseases', says his sister Mallika. Bottom row: Other transformations mark the festival. Left: A woman in the crowd 'possessed' by the goddess. Right: A man dressed up as a Pothuraju performs before the head Pothuraju arrives

After receiving the bhandar , Ashwin returns to his ancestral house. The male elders of the Posani family sit and make pasu – a mixture of the turmeric, kumkum , oil and water – while Ashwin takes a bath. Wearing only  red underpants, he then smears the mixture on his body with help from his family elders and temple representatives. A charla cola (whip) and a waistband of ghungroos (small bells) are kept beside the photos of deceased relatives who had been Pothurajus. All this while, the band plays outside the house. Once the pasu has been applied, all the people in the room chant prayers to the goddess. The charla cola is dipped in the pasu and given to Ashwin by the elders, who also tie the waistband around his waist. He is now the Pothuraju.

“Devotees wait outside the gates of their home for the Pothuraju to come,” Ashwin says. He is the sixth generation in his family carrying forward this 11-year-old legacy, says his father, Babu. The family belongs to the Mudiraj caste, listed as an OBC in Telangana. Babu, a retired foreman with the department of transportation in the Hyderabad municipal corporation, says, “In 1908, the Musi river (Hyderabad is located on the banks of this river) flooded and the death toll rose with the outbreak of cholera. The water had touched the Charminar. The then Nizam of Hyderabad, Mir Osman Ali Khan, and his prime minister, Maharaja Kishen Pershad, went to the banks of the river with a winnowing basket filled with rice, gold, jewels, diamonds and other riches, left the offerings in the river, and begged the goddess to thwart the flood.” The water receded and the Lal Darwaza temple, built a year earlier, in 1907, gained prominence.

“Our forefather, Singharam Babbaiyya, was appointed as the first Pothuraju by the temple authorities in 1908,” Babu reminisces. Over a century later, the Posani family continues the traditions associated with the temple.

“This is a part of our family tradition and we will continue it,” says T. Mallika Rakesh, Ashwin’s 33-year-old sister, a homemaker. “It’s a service to the goddess. In the week of Bonalu, people from the area keep visiting our family. On the day of Bonalu we serve food and liquor to everyone who visits.” The meals include rice and puris , and mutton and chicken curries; the liquor comes from the local shop. 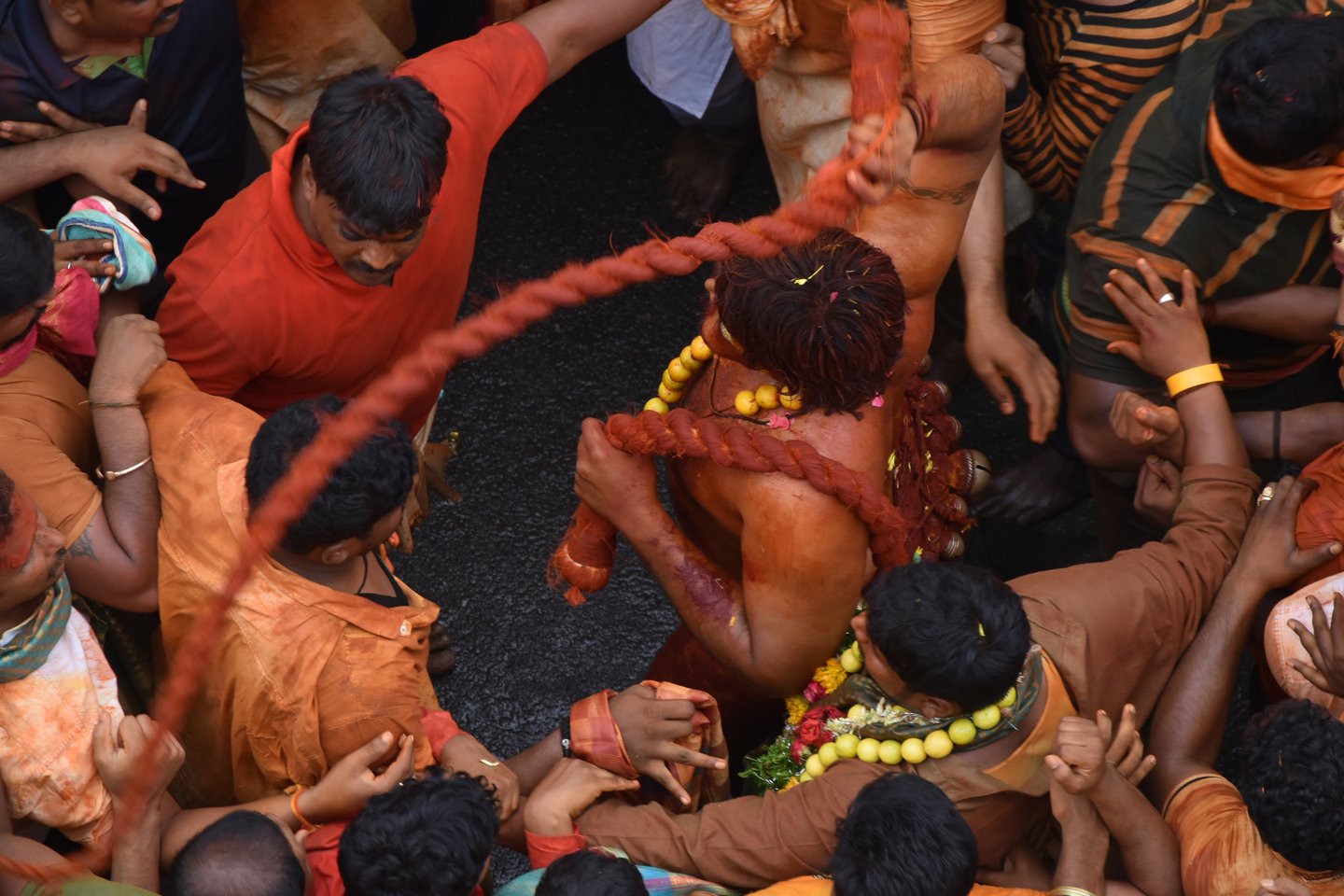 'Parents even want the Pothuraju to whip the children so that they will stay healthy. Small children aren't whipped, but I put charla cola around their neck and bless them'

“Getting whipped by the Pothuraju [people believe] wards off diseases. People queue up to get beaten by him,” Mallika adds. As Pothuraju, Ashwin strikes people with the whip, chasing them as they run away. After a while, as devotees surround him, he begins to dance. He stops outside houses where devotees touch and wash his feet, and drape him with shawls and flower garlands. He whips them, too. This is considered a blessing by worshippers.

“Parents even want the Pothuraju to whip the children so that they will stay healthy. Small children aren't whipped, but I put charla cola around their neck and bless them," Ashwin says. “Our family incurs all the expenses for this ritual [around Rs. 3 lakhs every year]. “The temple gives me 2,100 rupees and a gold ring weighing two and a half grams.”

As the Pothuraju’s procession winds its way through small lanes around the temple, after hours of dancing and whipping people, Ashwin enters the Lal Darwaza temple. There, the shanti ritual is performed in order to dispossess Ashwin of his Pothuraju incarnation. The temple priest pours water on him, and hands him more mixture of turmeric and kumkum ; Ashwin comes out and distributes this among the gathered crowd. 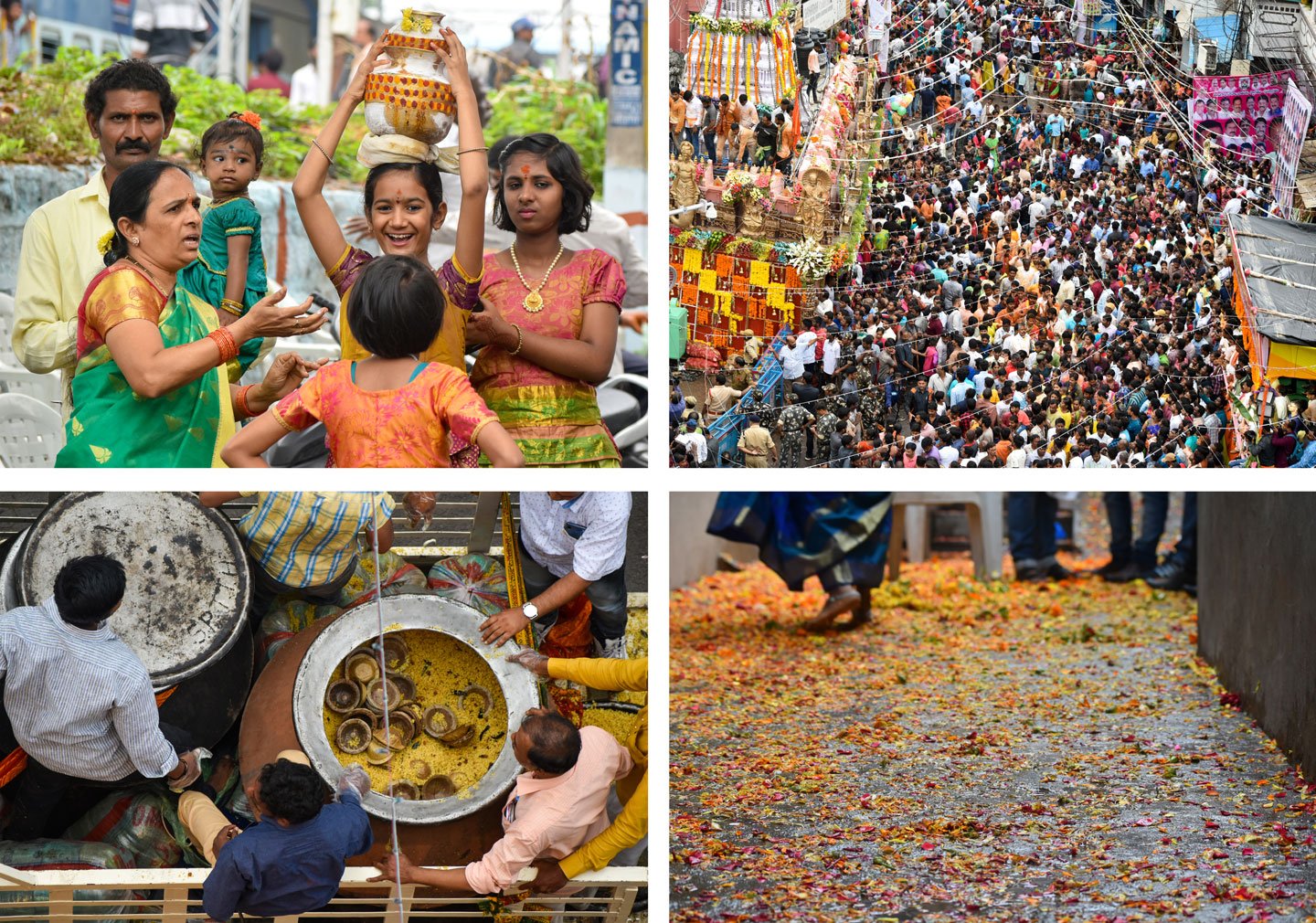 Top left: A girl holding the pot with the bonam (special meal) cooked for the festival. Top right: Crowds on the way to the Lal Darwaza Simhavahini Mahankali temple. Bottom left: Rice being served to the devotees. Bottom right: The street carpeted with flowers after Pothuraju's procession has passed by

This is followed by the rangam or fortune-telling by a woman who, ‘possessed’ by Goddess Mahankali, becomes an oracle ( more on her follows in another story ). She makes predictions about people’s well-being and the weather, and responds to questions asked by the priest and devotees.

Then the ghatam is lifted, and accompanied by a procession of the devotees, it is immersed in the Musi river by the priest and temple authorities. The festival is officially over.

The next day, Ashwin, fearsome Pothuraju, protector of the Seven Sisters, giver of blessings by means of whipping, becomes an auto-parts dealer again – in everyday life, he works in his well-to-do family firm selling automobile parts at Uppuguda in the old part of Hyderabad city.

“I’ve been seeing him become Pothuraju  for five years now. He looks different as Pothuraju,” says 28-year-old Kavitha, “but when he comes back home, he is my same old husband.”