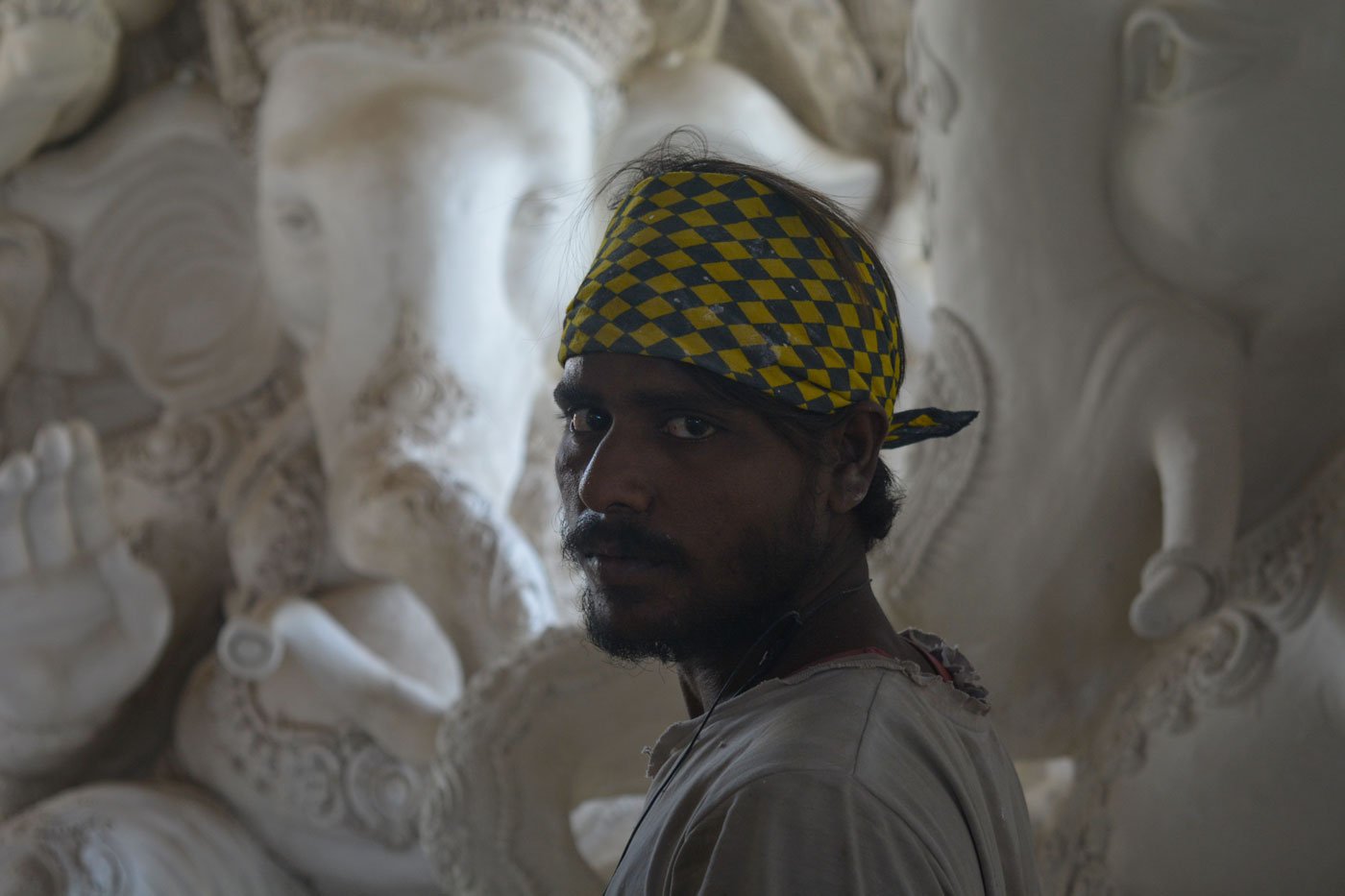 The designers of Dhoolpet’s deities

An array of artisans, most of them migrants, come to Hyderabad months before the ongoing Ganesh Chaturthi festival to make idols, but say the work is not regular now due to cheaper items in the market

Holding onto the trunk of a 10-foot idol of Lord Ganesha seated on a throne, one arm raised in blessing, Shankar Mirdwad is adding the final touches to it with clay. Coconut husk and sacks full of plaster are strewn around, next to paint bottles, containers of rubber dye and idol frames. "The POP is missing from some portions,” Shankar says. “After that, the idol is ready to be painted."

The tarpaulin and bamboo shed where he is working is barely visible behind an array of ready and in-progress idols on Mangalhat road in the bustling Dhoolpet locality of the old city of Hyderabad. Trucks and tempos are moving like snails along the narrow lanes ferrying big and small Ganesh idols – the biggest ones made here are 21 feet – covered in tarpaulin and accompanied by cheering crowds of men, on their way to community pandals and homes.

Shankar has been working at this shed since the last week of June. The owner, who is out of town, runs three more such workshops, he says. In each, when I visited in the last week of August, 2-3 artisans were busy readying the idols for the Ganesh Chaturthi festival in the first week of September this year.

Another batch – the sculptors – had come to Dhoolpet’s worksheds around January and left by April, as they do every year, Shankar explains. “In our shop we call a Kolkata-based murtikar ,” he says. “He makes the idol with chini mitti [fine-grained soil]. It takes around 25 days for the murtikar to complete a [big] idol.” 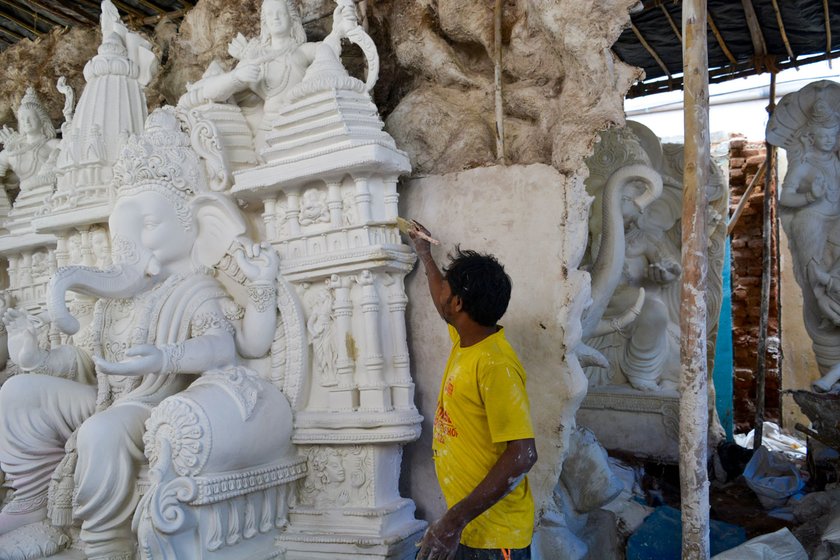 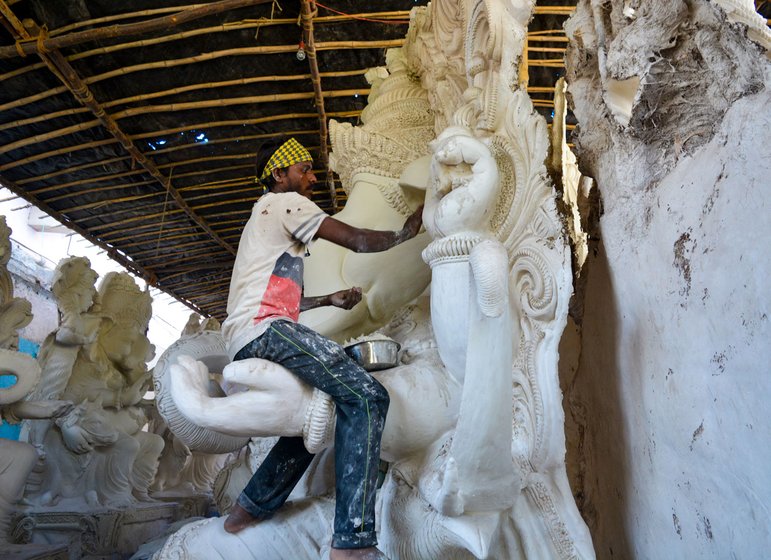 Left: Shankar Mirdwad painting over a bruised portion of a backdrop. Right: Babban Dawlekar comes here from Nanded district; back home, he drives an autorickshaw

A few weeks later, Shankar and other artisans step in. He explains the process: the sculpted clay idol serves as a template. Shankar and his co-workers coat it with a rubber dye, which hardens into a sheath in around 10 days. It is then covered with liquid resin. Together, these coalesce into a mould which is removed from the base idol. The mould is stuffed with plaster and husk to make another idol. For tall idols, bamboo is placed inside to provide support. The plaster hardens within 10-15 minutes. The mould is then removed. Using clay, the workers fix any chipped portions. After that, the new idols are painted and decorated according to the customers' demands.

This way, Shankar and the others in this workshop make, he says, around 50 idols of each design – and a total of around 400 Ganesh idols during season in the four workshops owned by Shankar’s employer. They make only big idols, 10 feet or more, and depending on the design, each is sold for prices ranging from Rs. 15,000 to Rs. 60,000.

Shankar, now 29, has been making idols for over a decade – of Ganeshs, Durga, and other deities. He belongs to the Kumbhar caste, which traditionally specialised in making pots. “I first came to Dhoolpet with my uncle when I was 16, during vacation after my tenth standard exam,” he says. “I did small jobs like carrying things or helping with the paints.” He stayed for three months, earning Rs. 3,500 a month.

Shankar’s family is in Varni village in Varni mandal of Nizamabad district of Telangana, around 180 kilometres from Hyderabad. After that vacation, he went to study for a BA degree in a college in nearby Nanded district of Maharashtra. “I left the course in the second year,” he says. “I was the eldest in the family and it was my responsibility to take care of them.

Shankar’s three brothers (they don’t have sisters) are all idol-makers. He and his wife Swati, who makes beedis for an income, have two daughters, eight and three years old. His parents live with him, and are potters in the village. 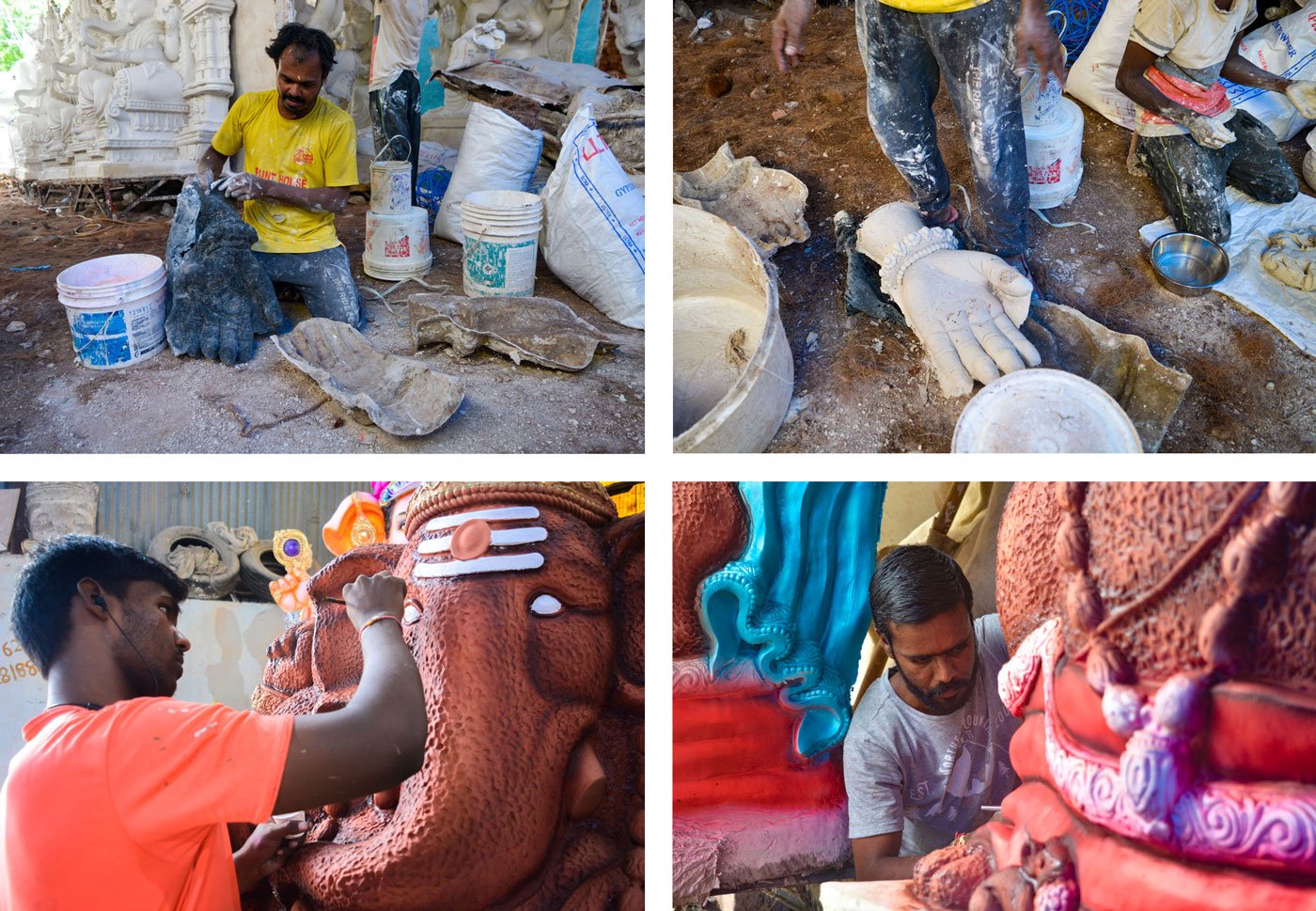 Idol-making in process: Shankar with a rubber dye cast (top left) in which he will put a mixture of POP and coconut husk to make this hand (top right). Shailendra Singh colouring the eyes of the Ganesh idol (bottom left), the toughest part he says, of the painting. Badri Vishal giving it the final touches (bottom right)

Soon after leaving college, he returned to Dhoolpet. “Watching and helping the other idol makers in their work, I too learned to make murtis . From then on, I have kept working as an idol-maker on contract in different places like Kurnool, Guntur, Nellore, Vijayawada, Hosur and Bangalore,” he says. “Earlier there used to be work for all 12 months, but now I get this work only for eight months. The production has dropped in Dhoolpet with outside idols coming in the past 3-4 years."

Shankar says he is paid as much as Rs. 30,000 a month for his two months of idol-making in Dhoolpet. “I contract directly with the owners and they employ me because of my skill and pay me higher [amounts]. Beginners and workers who stay in one place get paid less. I complete the work in lesser time and more efficiently," he claims.

“After that, I go back to my village and take up any job that I get. I work as a [house] painter or in eateries as an attendant, earning around Rs. 600 a day,” he adds, standing on the throne with a spray gun to add white paint to the face of a Ganesh idol.

Like Shankar, many other workers from Telangana and other states come to Dhoolpet’s idol workshops before the Ganesha and Dussehra festivals. During those months, they stay in and sleep in the workshops. Among them is 22-year-old Babban Dawlekar, from Badur village in Biloli taluka of Nanded district. He has been coming here in the first week of June for five years, and then returning to his village to drive an autorickshaw. His father is an auto driver too, and mother is an anganwadi worker. “We start work at eight in the morning and it goes on till midnight or later. There is no fixed time,” he says.

Balvir Singh, 32, is from the Mangalhat locality itself and employed in another workshop in Dhoolpet for 10 years. “I get 12,000 rupees a month. But my working months have reduced to six or eight,” he says. “Dhoolpet’s idols have lost their fame because of the growing popularity of idols made in Maharashtra. Shops in Begum Bazar [around a kilometre away] sell them for lower prices. I work as a watchman or [house] painter in Hyderabad for the remaining months, but I don’t want to give this up. I am happy doing this work,” he says. 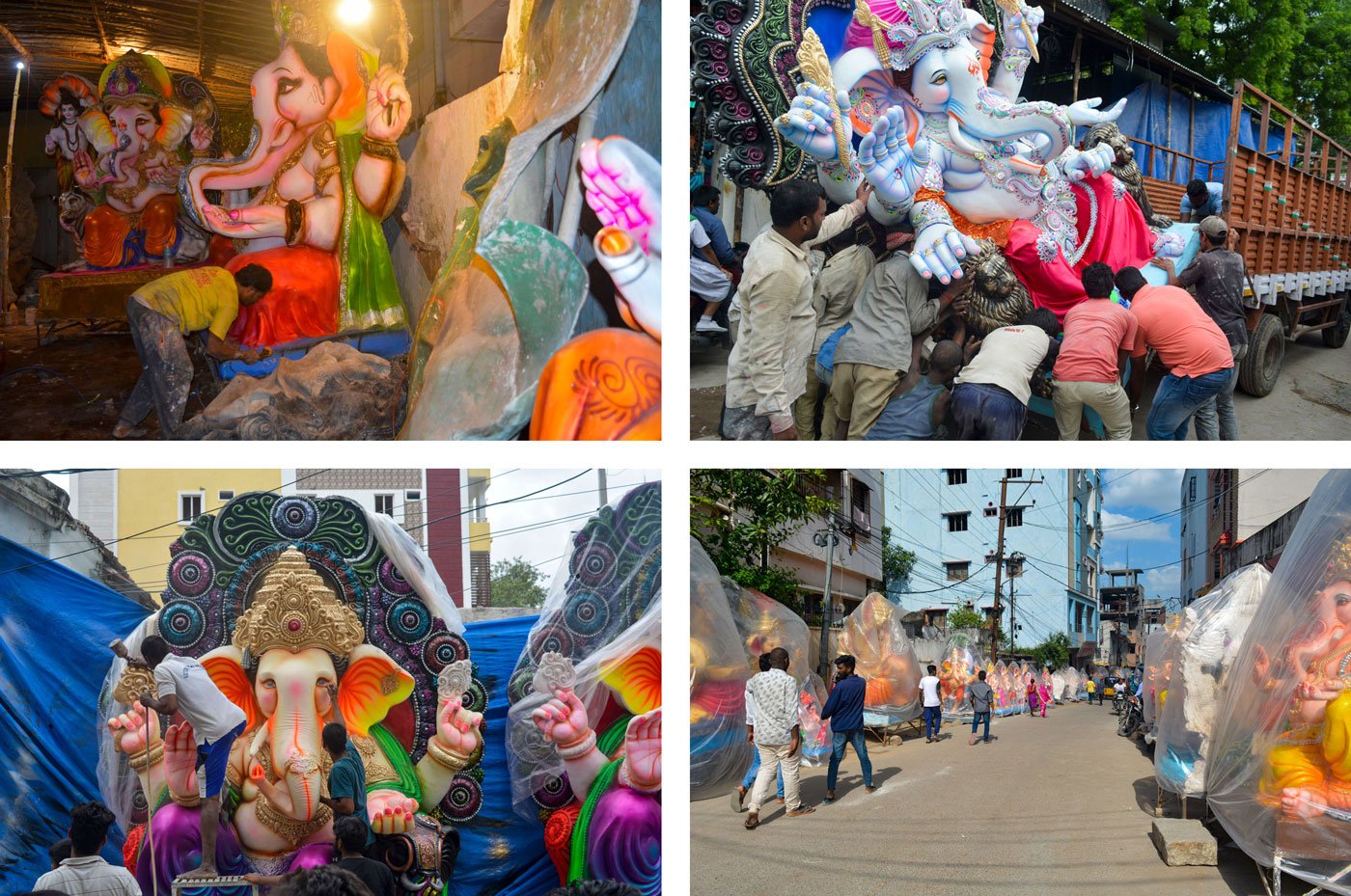 No longer just clay, plaster and husk, the idol has now taken on bright colours. Top right: Shankar using a spray gun to fine-tune the shades. Top right: An idol is ready to be moved to a truck and taken to its pandal . Bottom left: Further  touches are added on the street sometimes, while some idols await their buyers on the street of Dhoolpet

Ganpath Munikwarar, 38, who works in a workshop owned by a murtikar in Dhoolpet, is heating the charcoal used to dry the idols in the monsoon’s damp. He helps in polishing the idol with sandpaper and attaching the hands and trunk. He has come here for the first time with his brother-in-law during a break in agricultural work in his village, Doultabad, in Tanoor mandal of Adilabad  district (now in the redrawn Nirmal district) of Telangana. There he is an agricultural labourer, earning Rs. 250 a day; he also cultivates two acres of leased land. “I have been working here since mid-July. I get paid 13000 [per month],” he says. “From farming, I get around 50,000-60,000 a year. I grow soya, urad, tur, moong, jowar, chana … I don’t like this [idol-making] job. I have to work at night too. Next year, I won’t come,” he says.

After he, Shankar and the other artisans have made the idols from the moulds, the decorating begins. While they also do some of the painting, a different batch of painters work in groups of 2-3 – one doing the face, another the hands and so on. “We start working from June, two months before the [Ganesh] puja,” says 31-year-old Badri Vishal, who is from Dhoolpet, holding a spray gun and a paint bottle. “It takes half a day [eight hours] to paint an idol. We work on 5-6 idols at one time.” Badri has painted idols for 15 years. “For the remaining months, I sell kites in wholesale which I bring from Kanpur,” he says. “Here, I got a half-day off on Raksha Bandhan, otherwise we don’t get any holiday for two months. The work has got easy with the paint compressor machine [spray gun], but detailing takes up most of our time. I don’t know how much I’ll get paid this time, it depends on the kind of work we do.”

The eyes are the most difficult to paint. In the same workshop, 20-year-old Shailendra Singh carefully uses a brush to colour the eyes and forehead of Ganesh idols. “Two years ago, I started working as a painter here,” he says. “I work for two months and for the remaining months I study [he is trying to clear Class 12] and help my parents [in their dosa-idli stall in Dhoolpet]. I want to become the main painter who can colour the eyes of Lord Ganesha. Colouring eyes is the hardest, it has to be done in a way that devotees can feel that Ganeshji is looking at them from any angle they stand.”