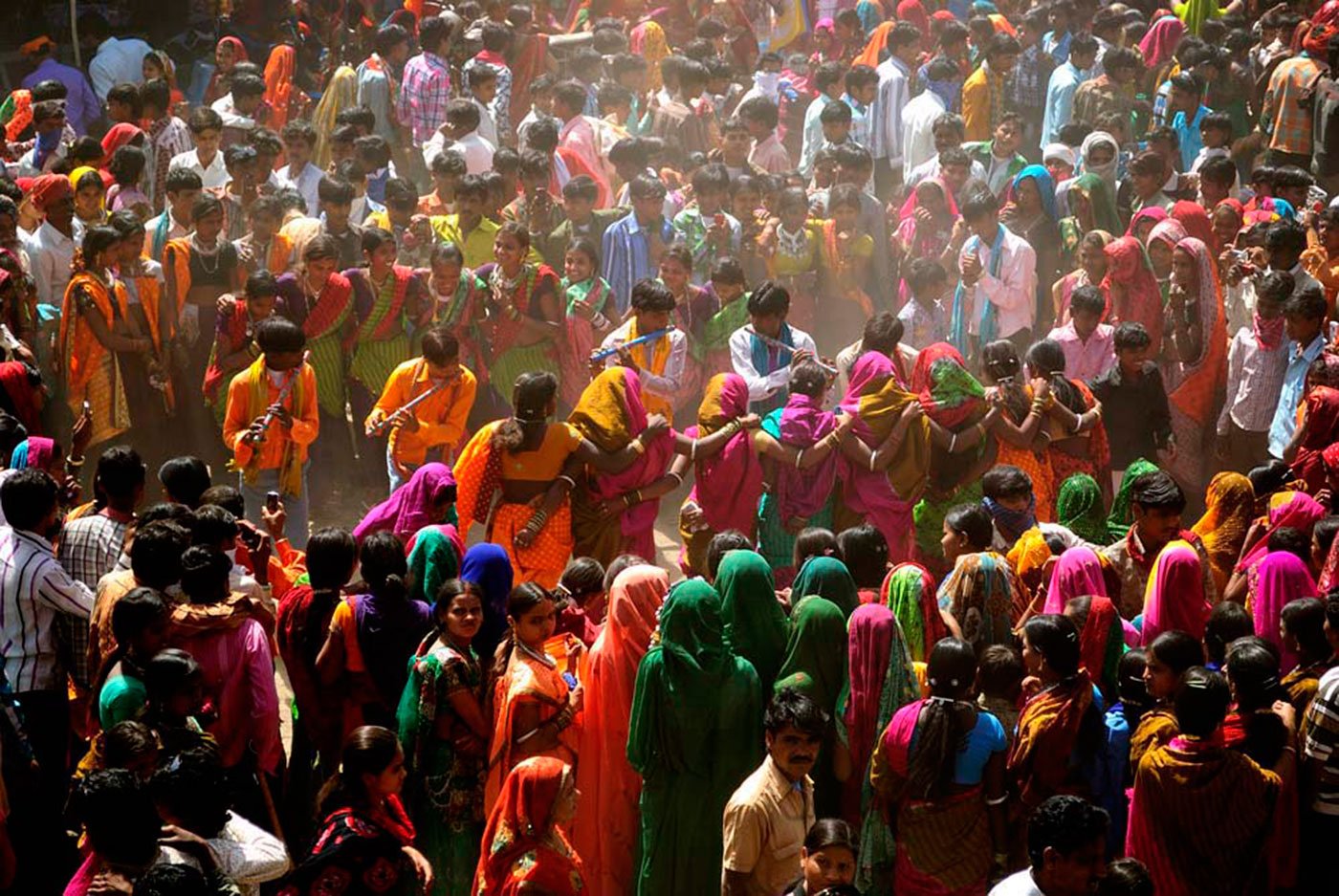 The Bhils of Alirajpur

Across the villages of Alirajpur district in Madhya Pradesh, many of them now denuded and barren and with few livelihood options, the Bhils struggle to retain their farming and cultural practices

The people here say this village was once lush green. “We have lived with nature and have always fulfilled our needs from it,” says Addya Mota, a marginal farmer and Adivasi elder. “But the forest became barren after the bajariya [modern humans] came here and we have become dependent on the market.”

Addya Mota is one of 312 Bhils in this village of 62 households. Their forests were denuded due to indiscriminate logging for industrial and other interests in the cities of Gujarat.

Another Adivasi elder, Bava Mahariya of Jalsindhi village, says: “We have always conserved the forest and used only as much as we needed. We have never exploited the forests as they are our only habitat and life.”

The Bhils had for long cultivated forest land, but most of them have been dispossessed by the state’s forest department after 1957, when these areas became ‘reserved forests’.

The Indian Forest Act (1927) provides for a legal process to settle the land claims of farmers when their area is declared a reserved forest. However, the forest department, taking advantage of the Adivasis’ unfamiliarity with these laws, cheated them of their land. As a result, many Bhils could no longer cultivate their ancestral lands.

In 1987, they formed the Khedut Mazdoor Chetna Sangath – Addya Mota is a member – to fight for their rights and began cultivating again. This led to a long battle, which contributed to the  enactment of the Forest Rights Act in 2006. Since 2008, several thousand Adivasi households in Alirajpur district of Madhya Pradesh have got titles to their ancestral forest land as a result of this struggle. 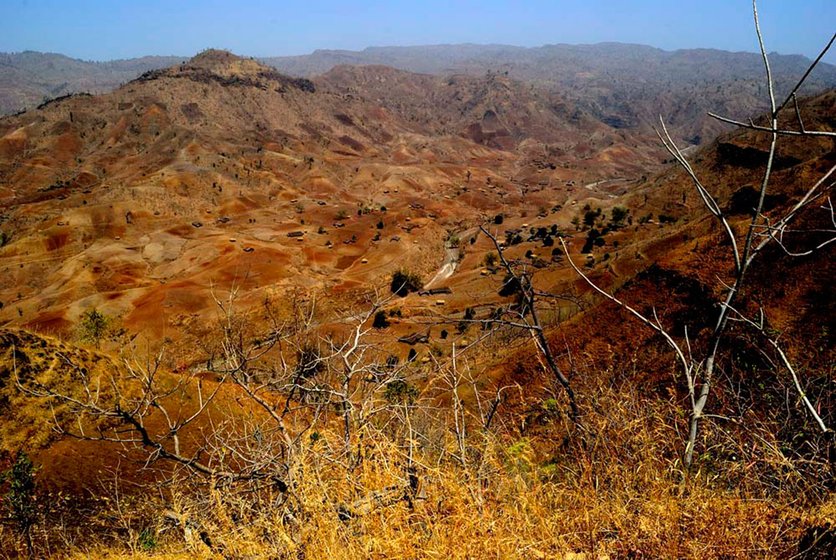 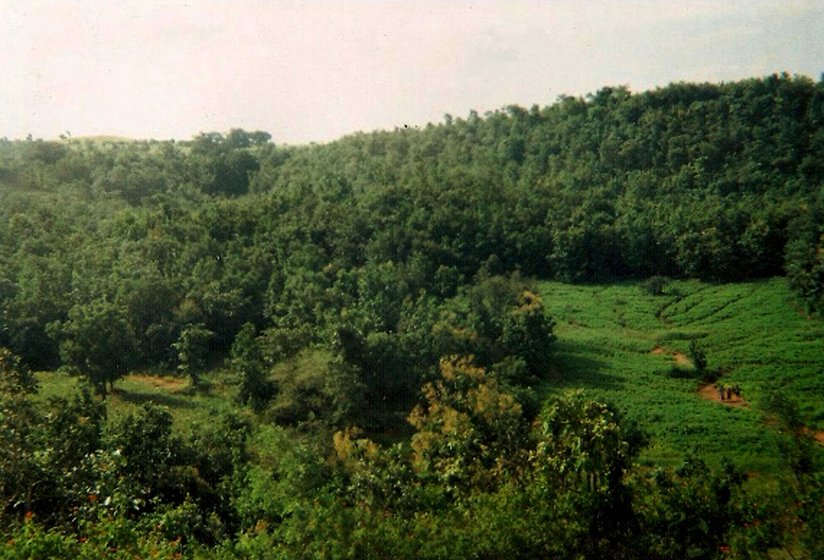 Left: Chhota Amba village (called Amba Chhota in revenue records) in Alirajpur district of Madhya Pradesh. Right: A panoramic view of the dense forest in Pujara ki Chowki village, among the few that still have such greenery. In the foreground is the farm of Ursia Punia, a Bhil cultivator 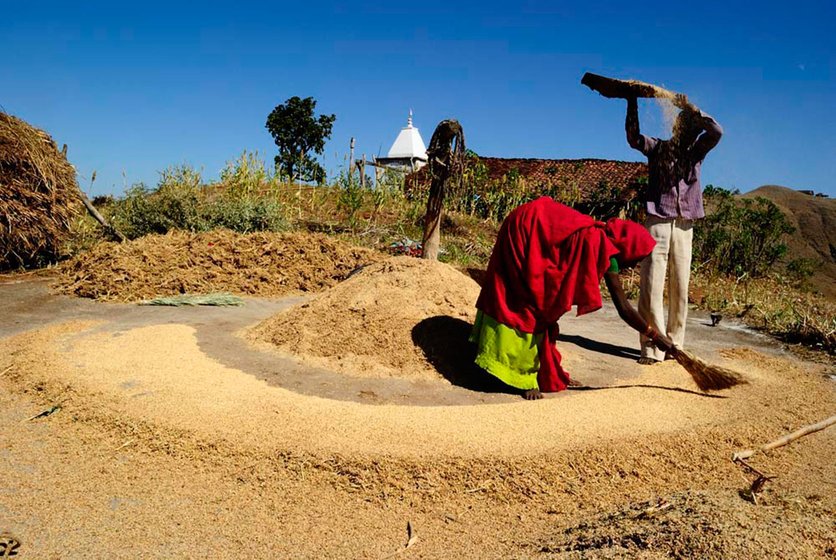 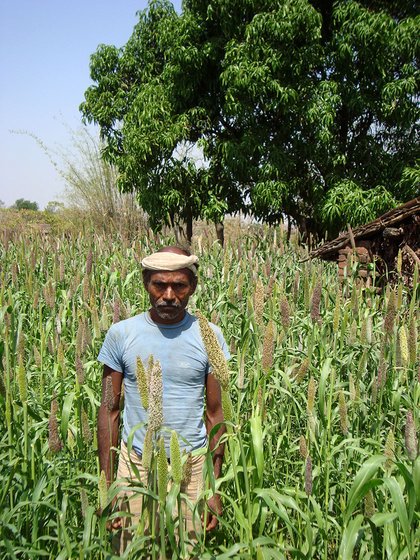 Left: A tribal family in Attha village separating jowar from the chaff. Sorghum, millets and maize are the main cereal crops that the Adivasis cultivate in this region. The produce is just about enough for their own consumption for a year; they don’t sell any of it. Right: An Adivasi farmer in Attha standing amidst his resplendent crop of bajra. The productivity of the kharif crop here, grown only using cattle manure, is quite high. But the landholding is so small that the total produce is not enough to feed everyone in the village 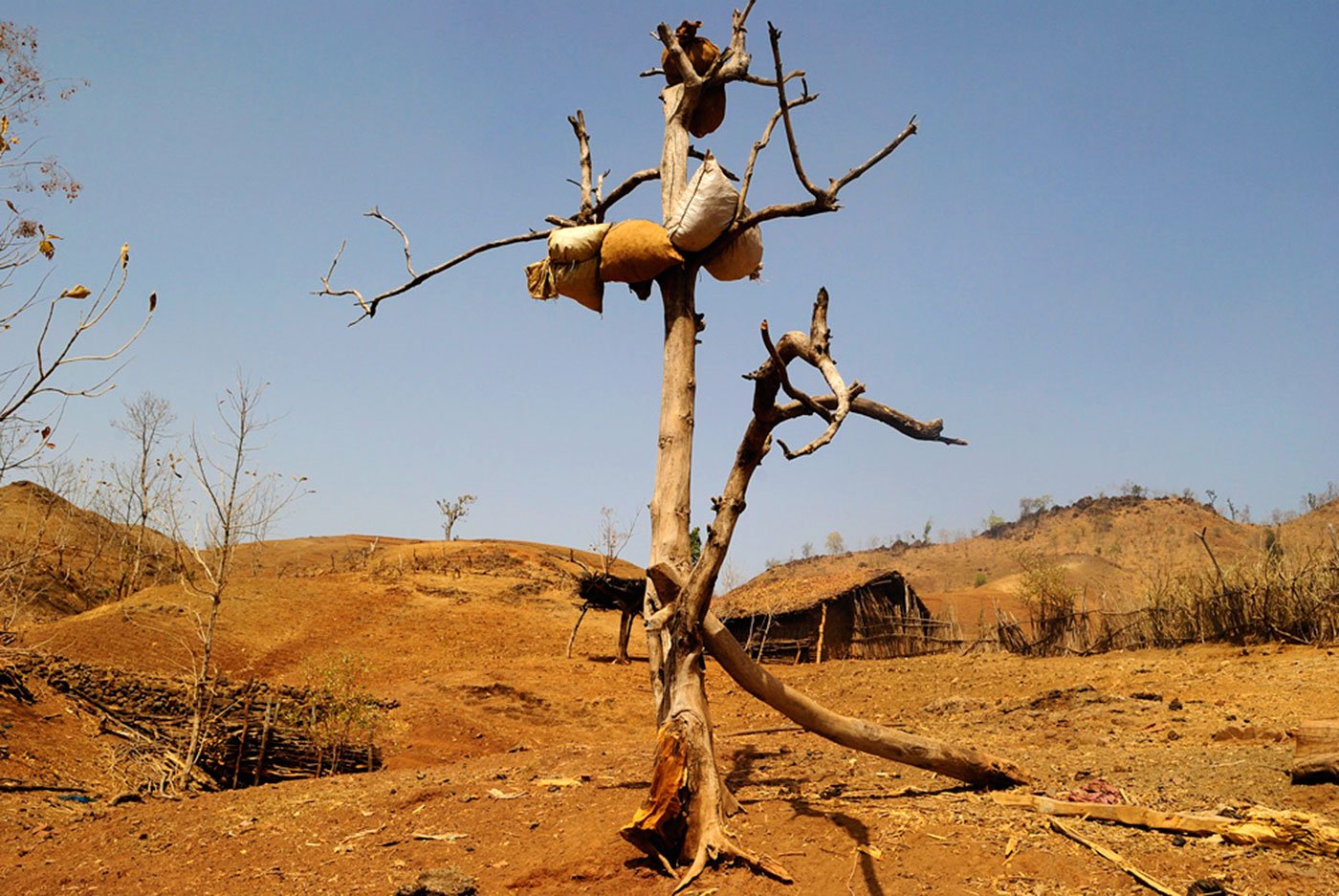 The Adivasis save the seeds from the current crop in sacks on a tree. They use the seeds for sowing the following year and usually don’t buy any from the market 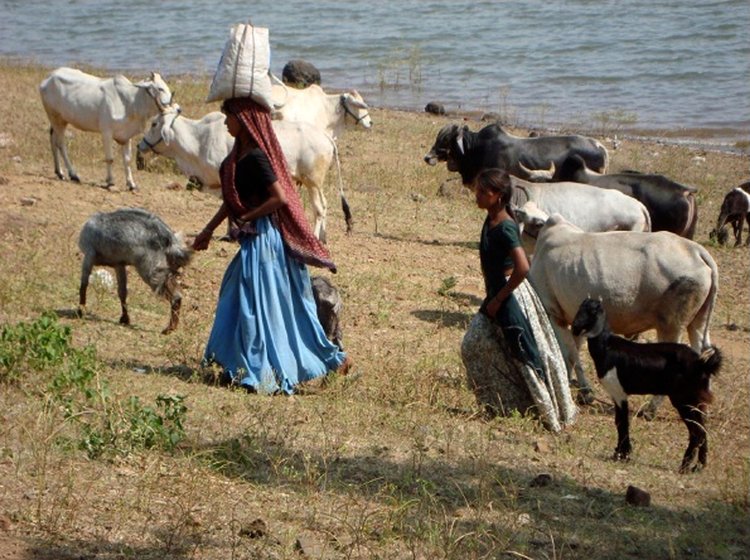 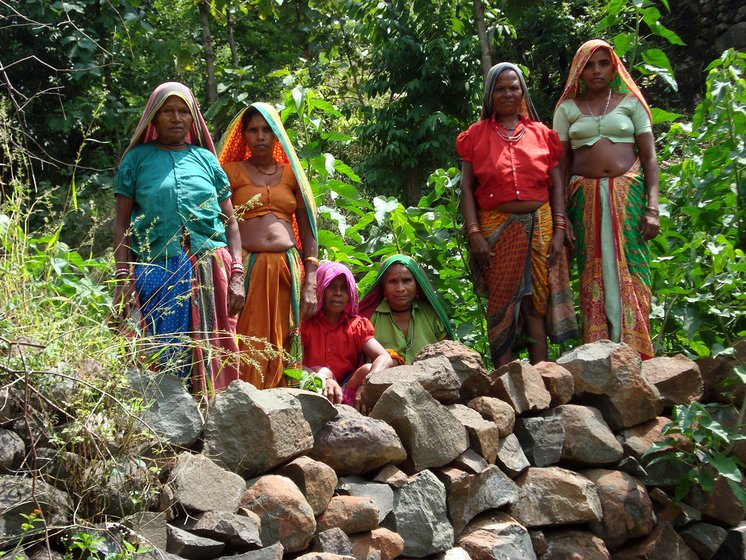 Left: Livestock is a major source of capital support for the Bhils. All members of the household contribute to looking after the animals. But due to a lack of fodder in the deforested hills, not much milk is produced. Right: Here the women of Attha village are working together to repair a farm bund made of stones. The Bhils pool labour – they work on each other's farms to save on monetary wages. This custom is called ‘ dhas ’ 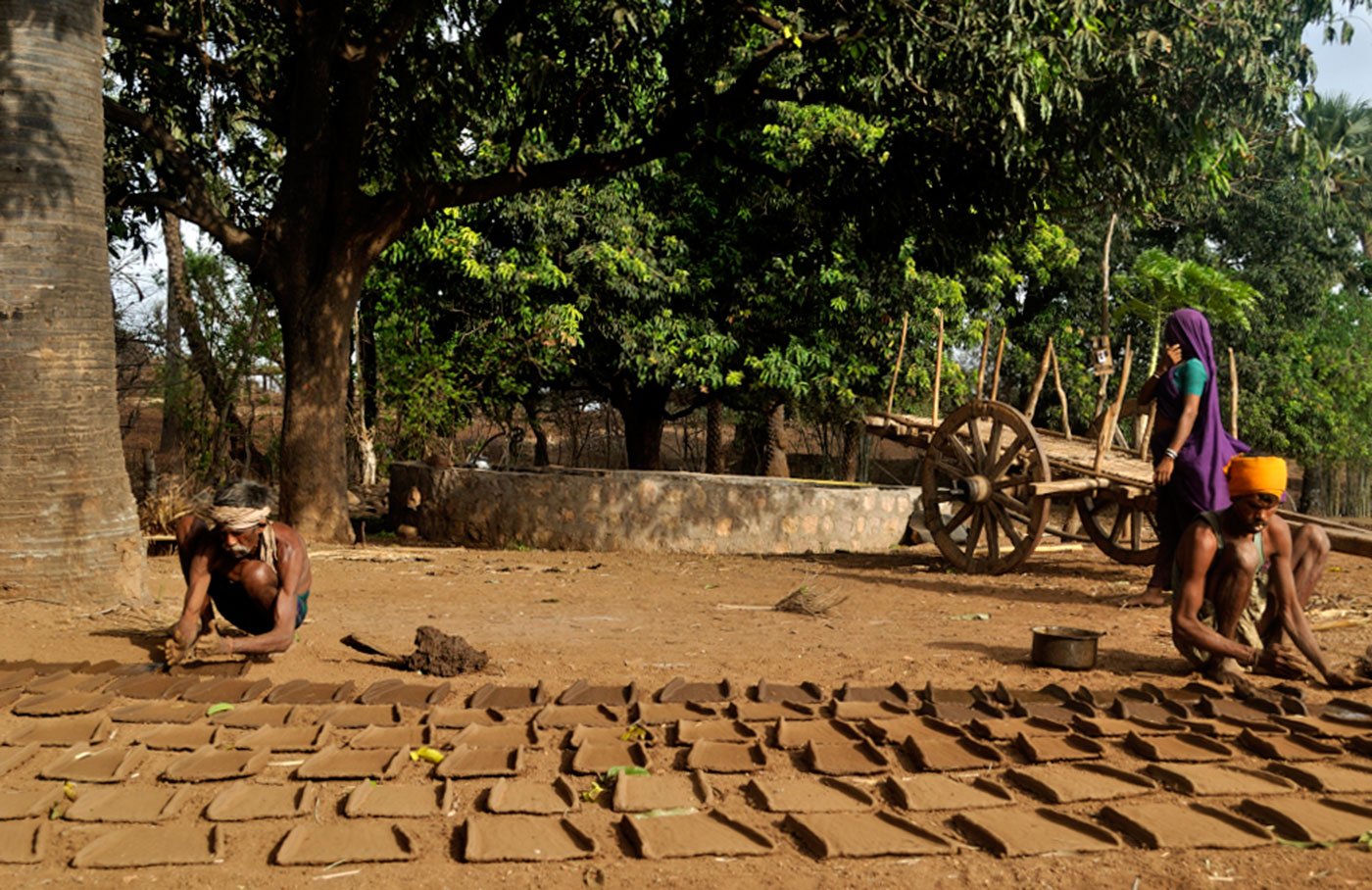 Villagers in Pujara ki Chowki making roof tiles of mud, which they will bake in an improvised kiln. The Bhils remain self-sufficient for many of their domestic and agricultural needs. 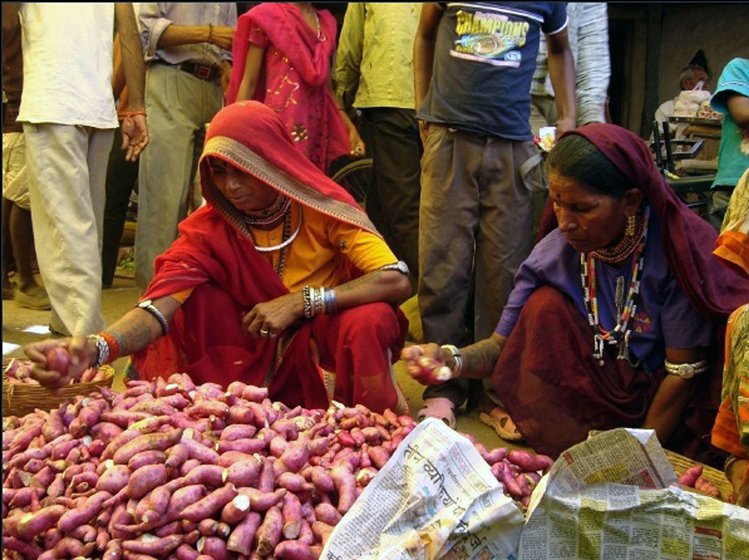 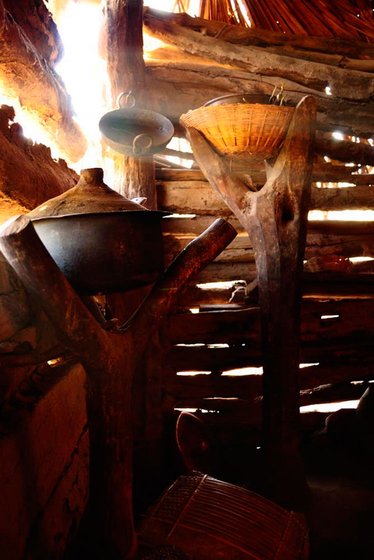 Left: W omen selling sweet potatoes grown on their farms at the haat (weekly market) in Valpur village in Alirajpur. The Adivasis sell a considerable amount of local produce in these haats , including jowar , bajra, maize, sesame, groundnut, onions and potatoes. They also buy some of their household and farm items here, such as salt, sugar, cooking oil, soap, ploughs and axes. Right: A kitchen in a Bhil home. The utensils are kept on stands made of logs, away from dogs and cats 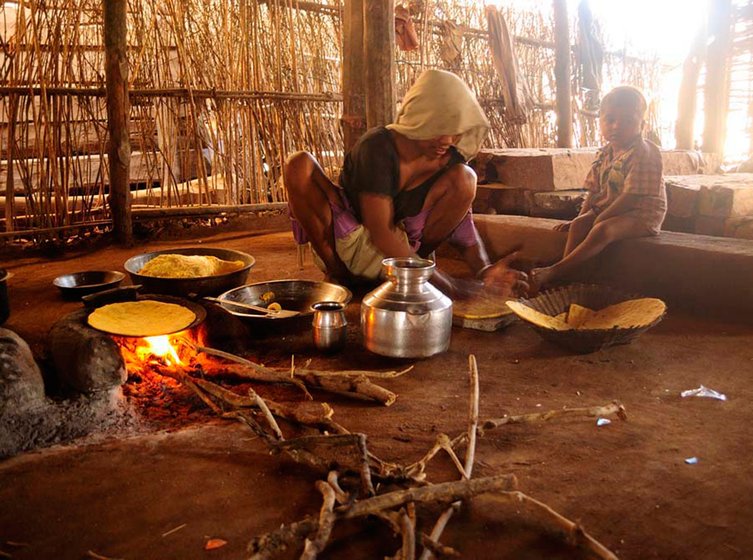 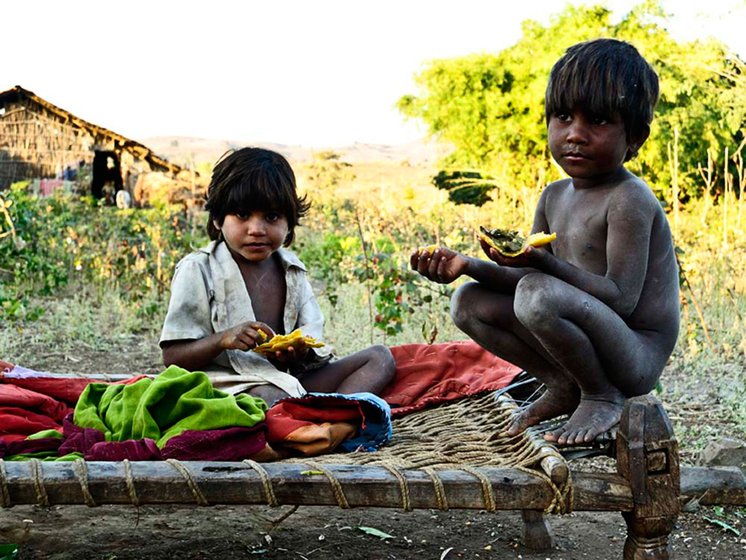 Left: A woman making rotis of maize flour in Aakadiya village. Maize and sorghum are a part of the staple diet, not wheat, which is commonly used to make rotis elsewhere in India. People here can rarely afford to buy other grains from the market. Right: In Attha village, Amashia Budla, 6, and his little sister, Retli, eat rotis made the previous day. Most of the villagers eat leftover rotis the next morning with crushed red chilli and edible oil 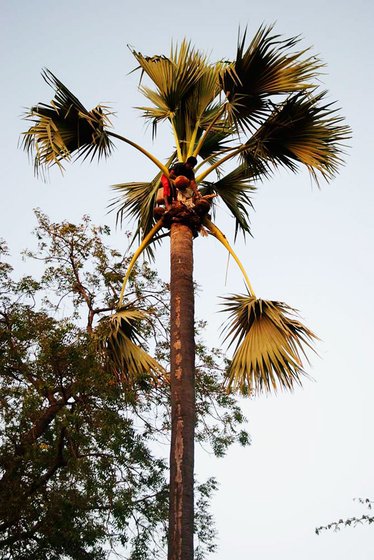 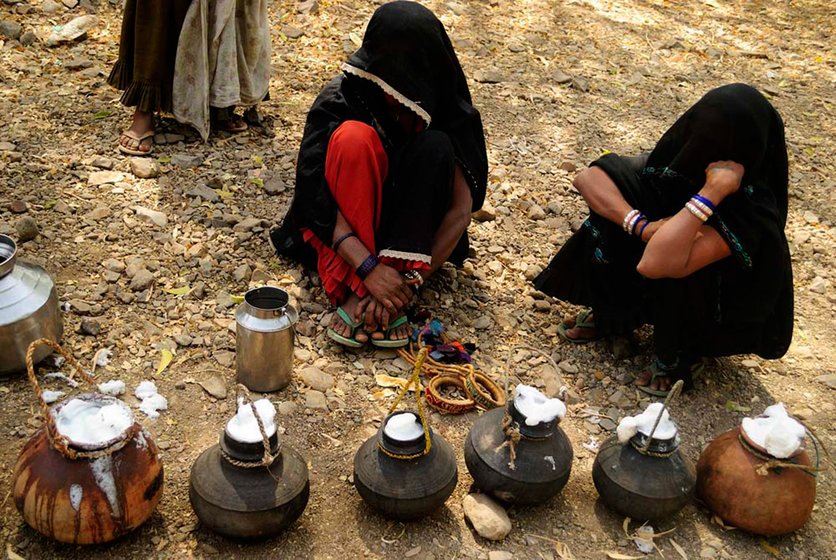 Left: Motla Thuna on a palm tree in Chilagda village, which the Bhils call ‘ taad ’. He is peeling off the branches to release a liquid called ' taadi '. To make taadi , the villages hang pitchers around the inflorescence (the incipient flowers of the tree) to collect the juice. This is done in the evening, and the pitchers fill up during the night. Early in the morning, it tastes like a sweet juice, but if exposed to sunlight, taadi ferments and becomes an alcoholic beverage. Right: Women selling fermented taadi in the market village of Umrali. The sale of the beverage has become a major source of income. On good days in the peak season (which extends from November to February), they can each sell up to 20 litres a day at Rs. 30 per litre. That goes down as the juice tapers off and their supplies diminish 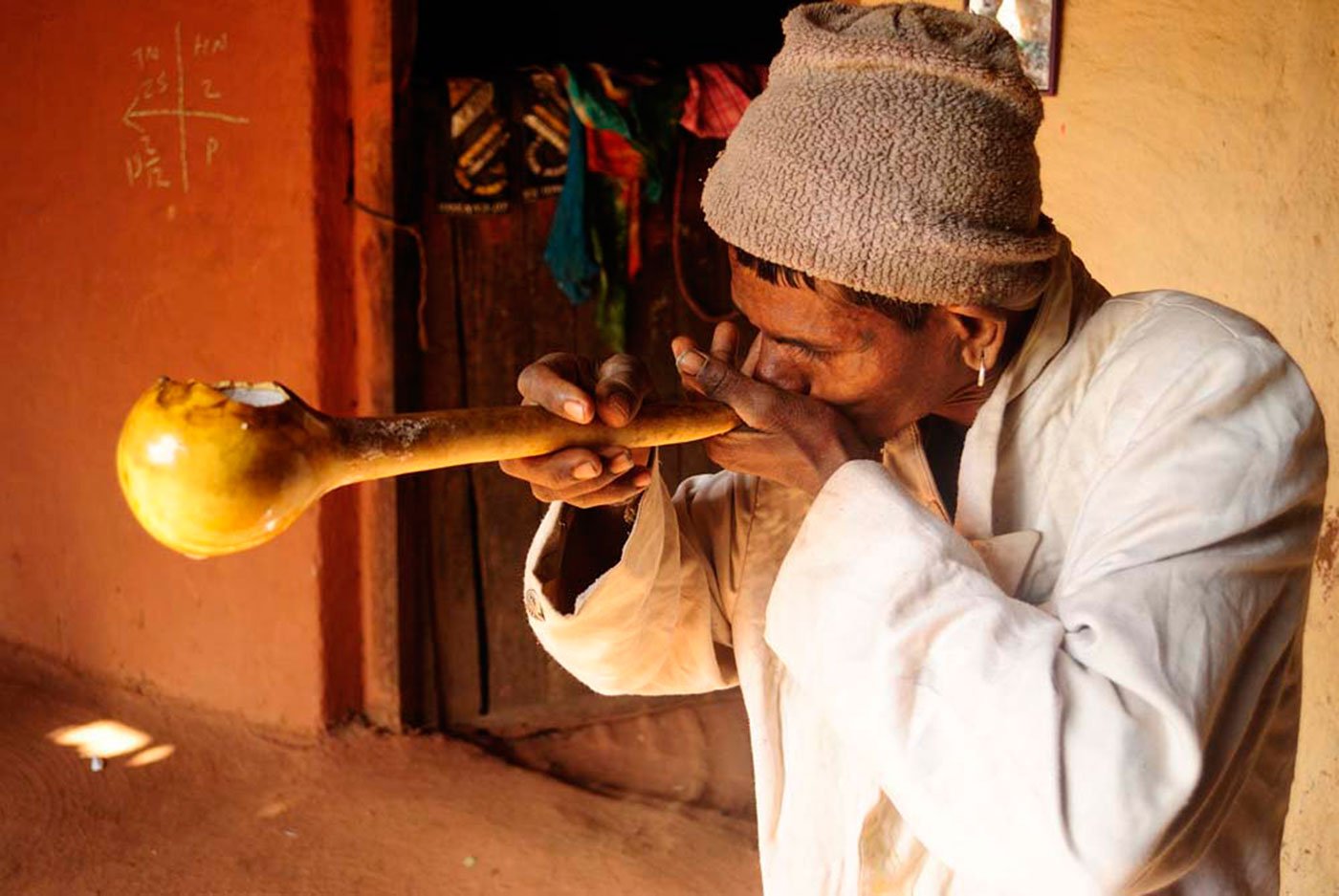 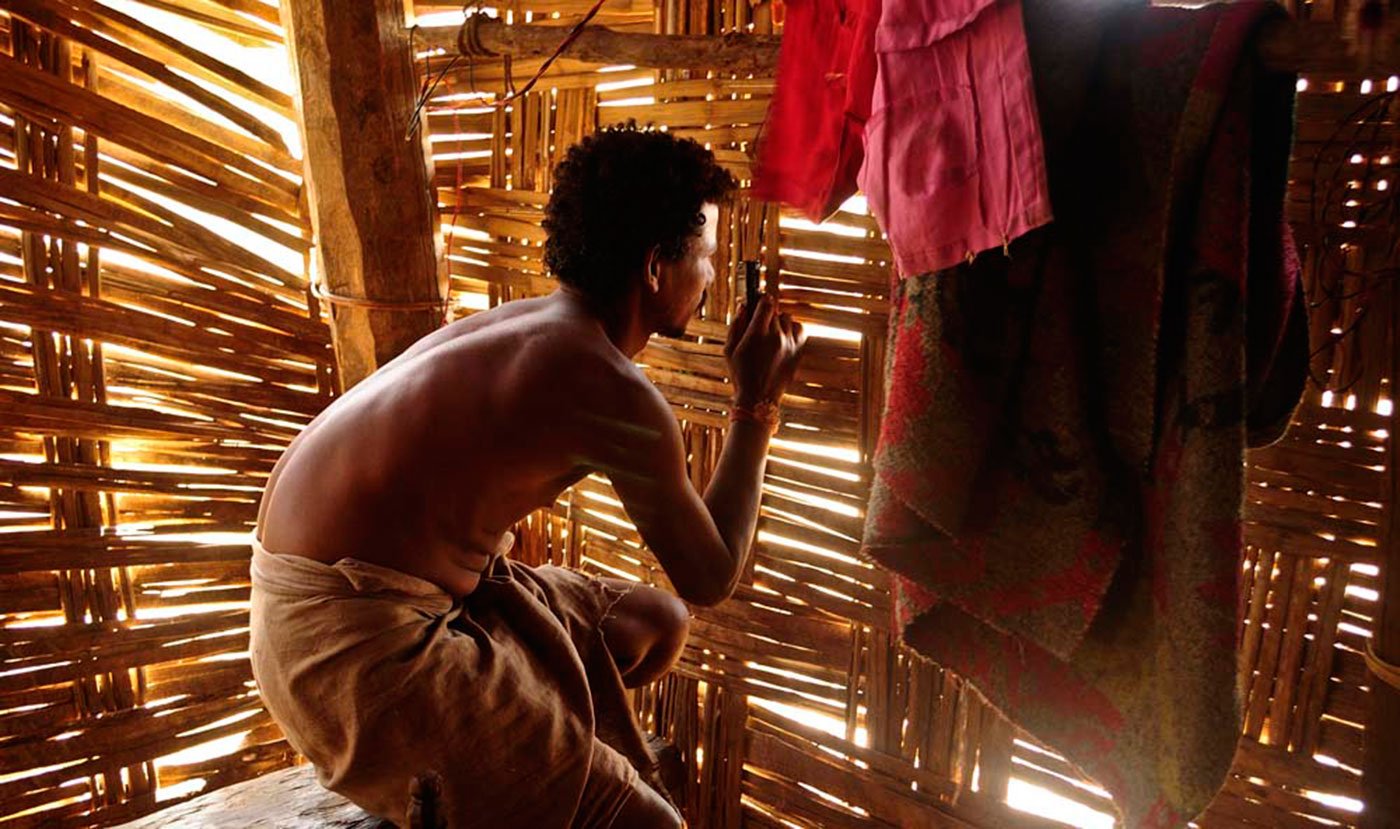 An Adivasi using a mobile phone hung from a post. Mobile networks are scarce in the village of Khodamba as well as in many other villages here. The phones are essential to keep in touch with family members who have migrated to Gujarat for work 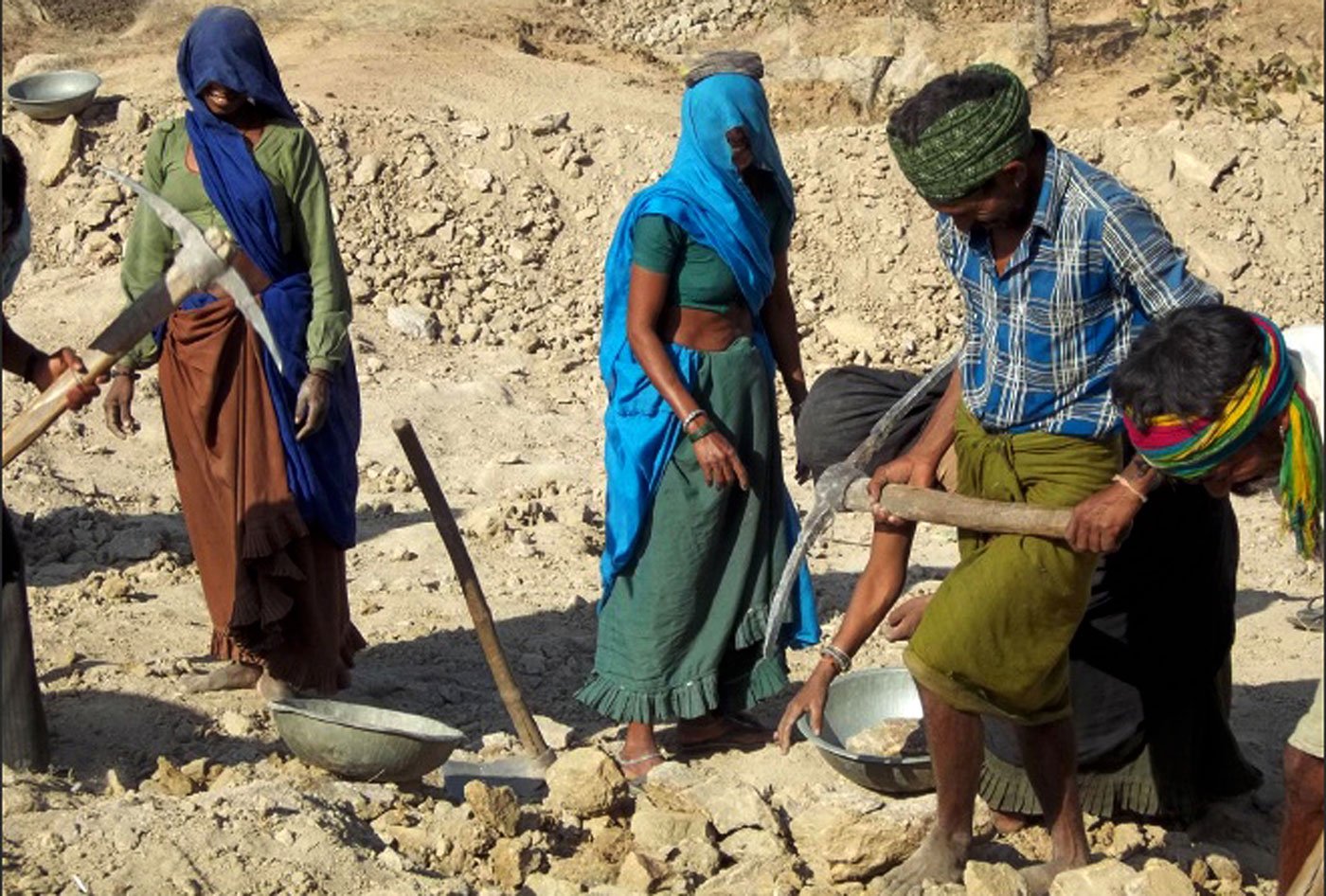 Many Bhil men and women work as construction labourers in Gujarat. A lack of adequate livelihood options in Alirajpur has forced 85% of tribal families (according to a survey carried out by the Khedut Mazdoor Chetna Sangath) to migrate seasonally to the cities of Gujarat – an unhappy transition from their once dense forests to the forbidding modern concrete jungles 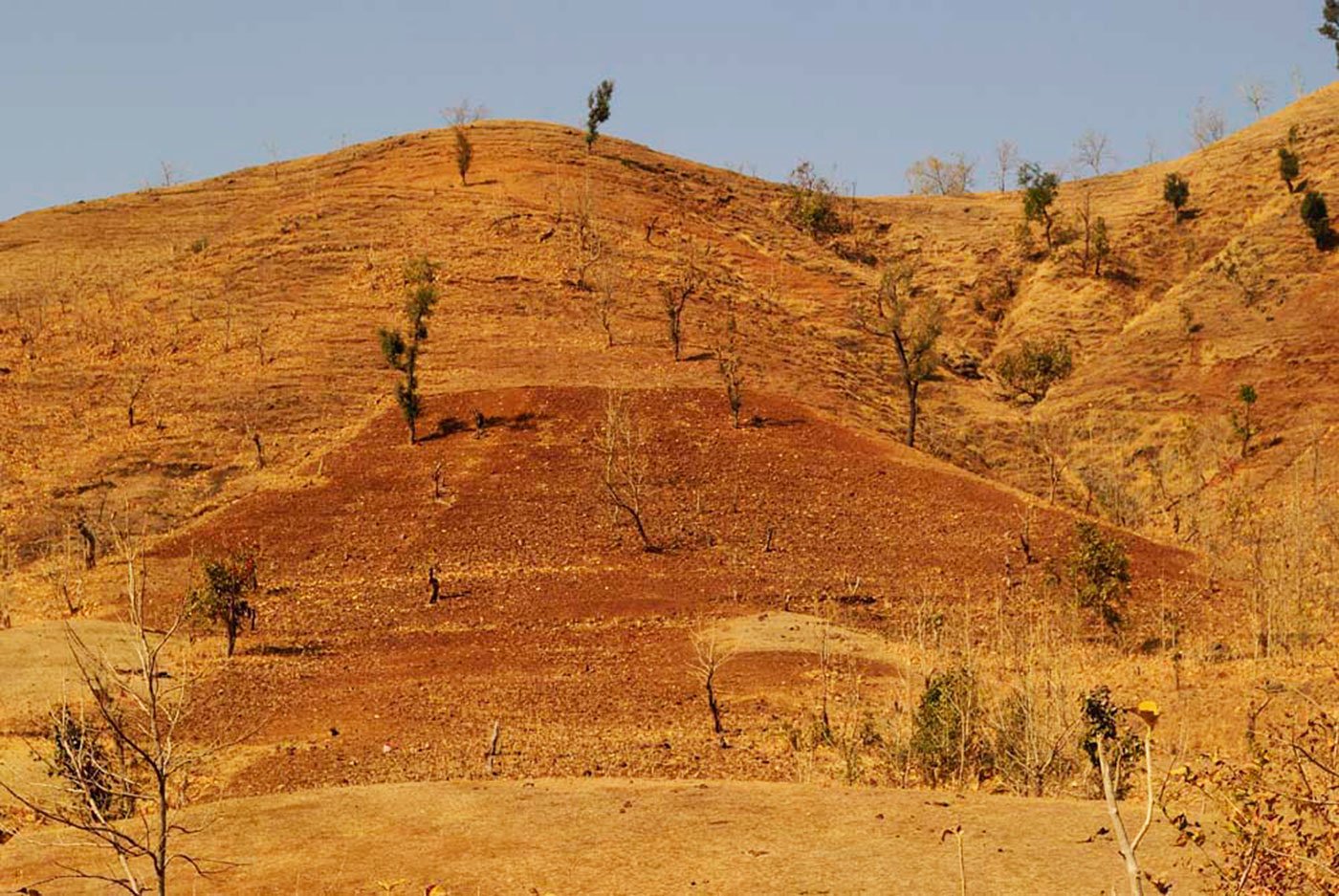 A farm in Jalsindhi village that was shifted uphill. It had to move when the plot on which it was located in the fertile valley of the river Narmada was submerged after the Sardar Sarovar Dam was built in 1998, displacing many villages and villagers 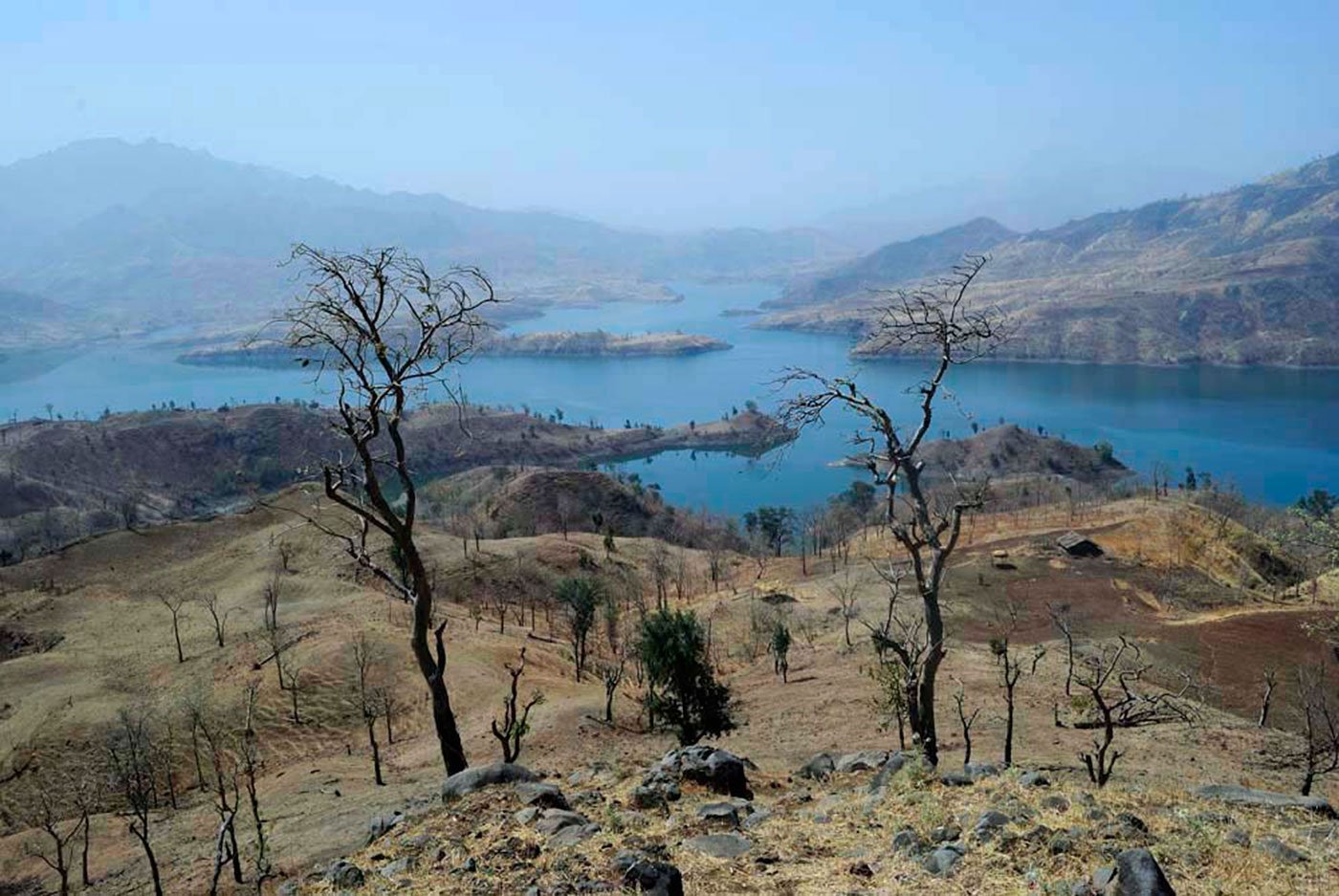 The mighty river Narmada across the denuded hills of Alirajpur 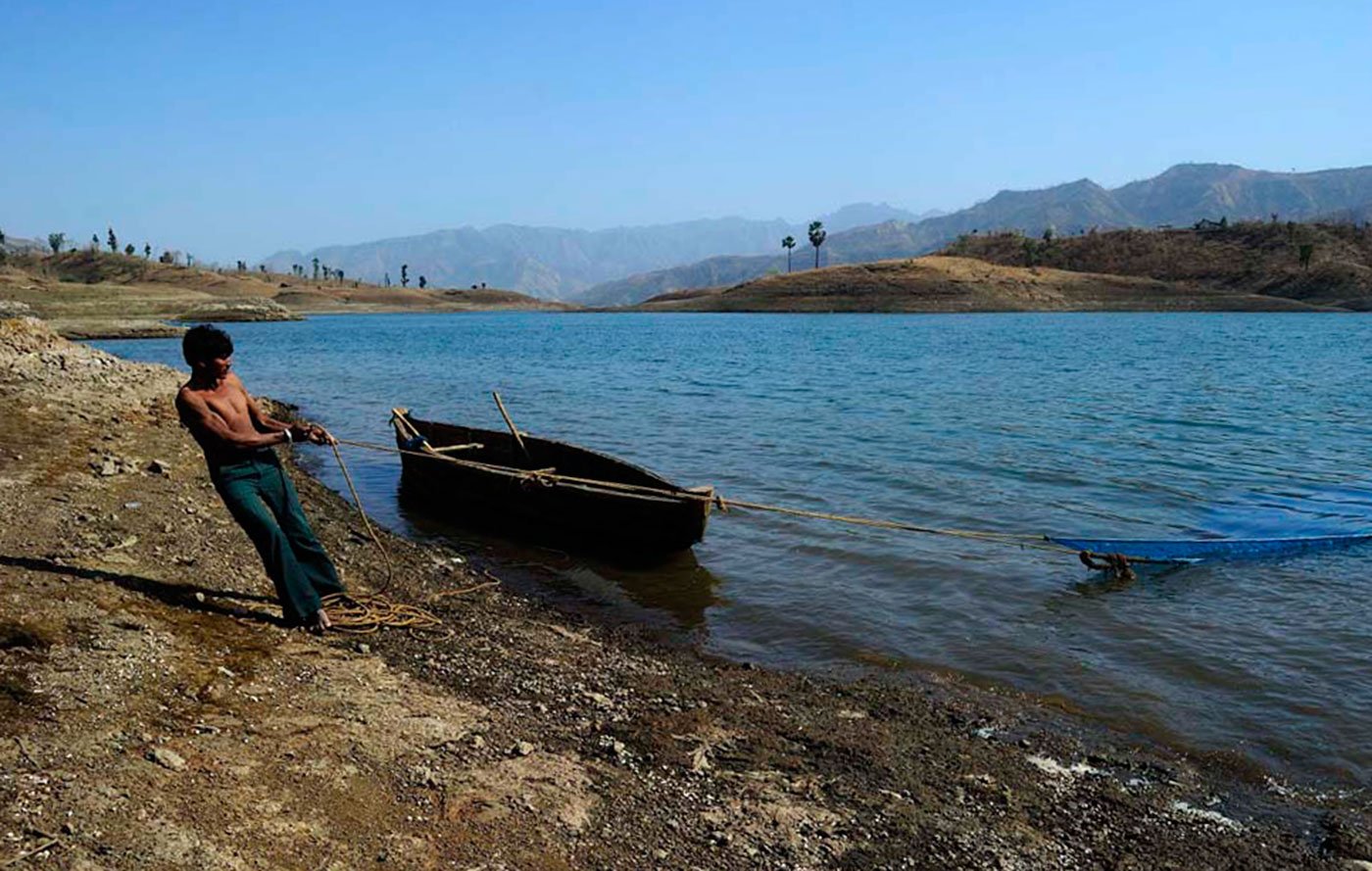 An Adivasi man pulling out a fish net in Aakadiya. Most of the villagers living on the banks of the Narmada make a living from fishing 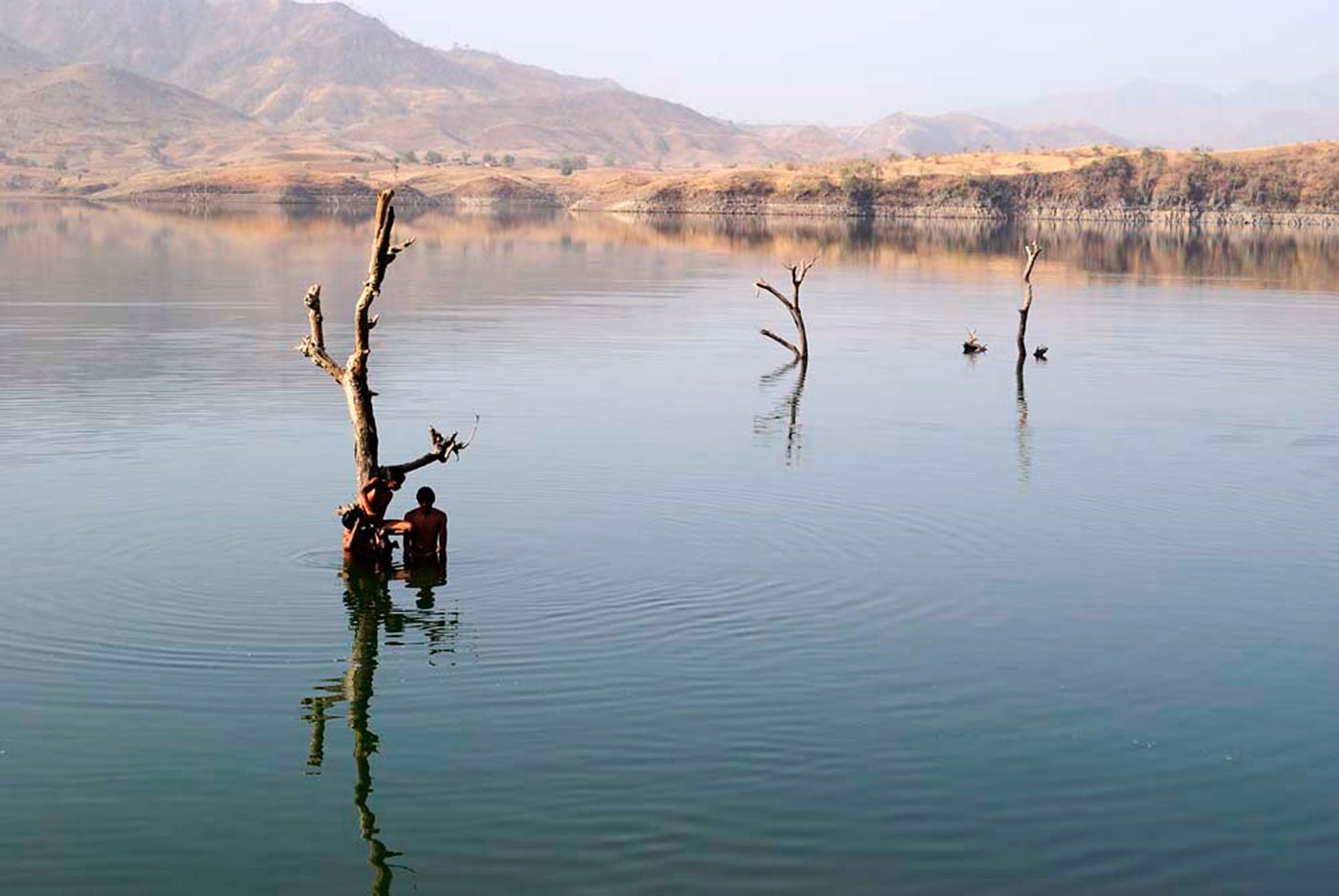 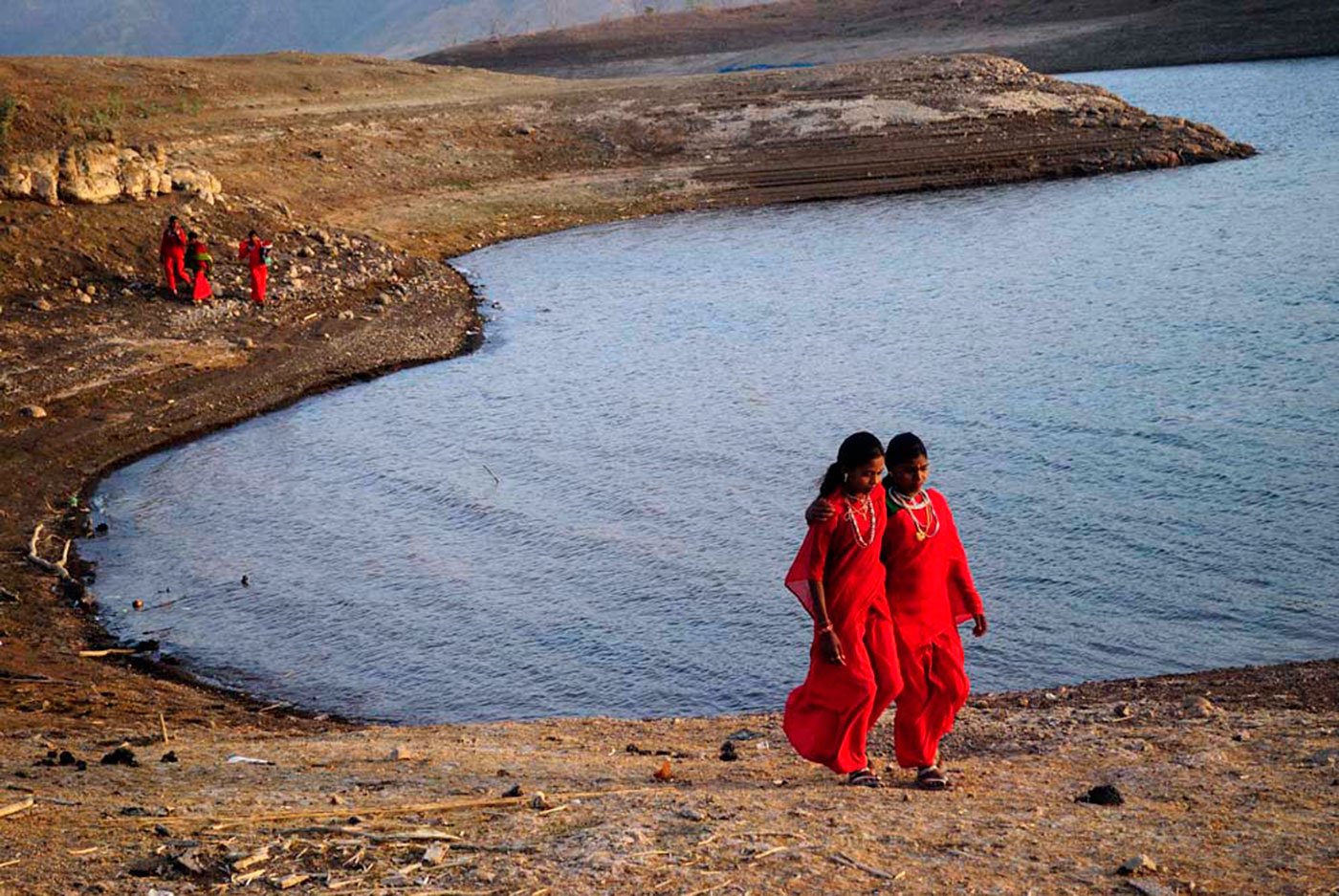 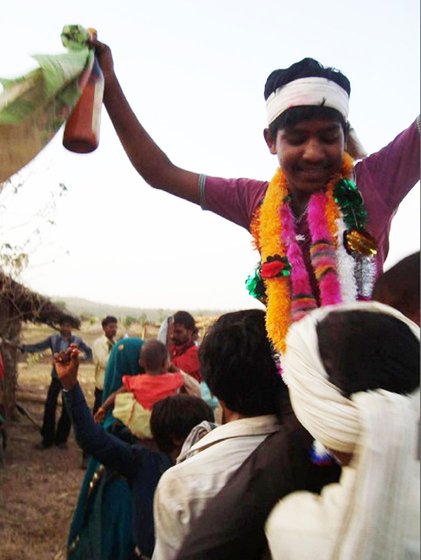 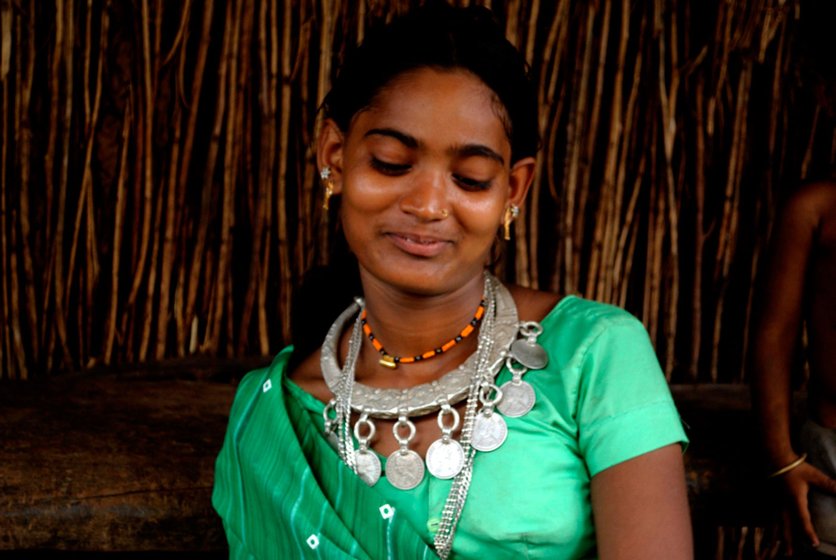 Left: Marriage is an occasion for celebration and the young bridegroom has been lifted up on the shoulders of one of his dancing kinsmen. Right: An Adivasi bride wearing traditional silver jewellery in preparation for marriage 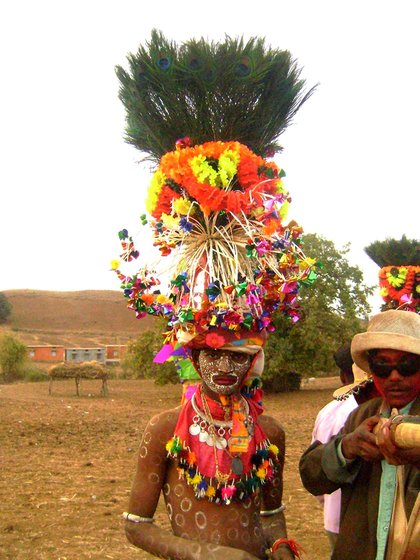 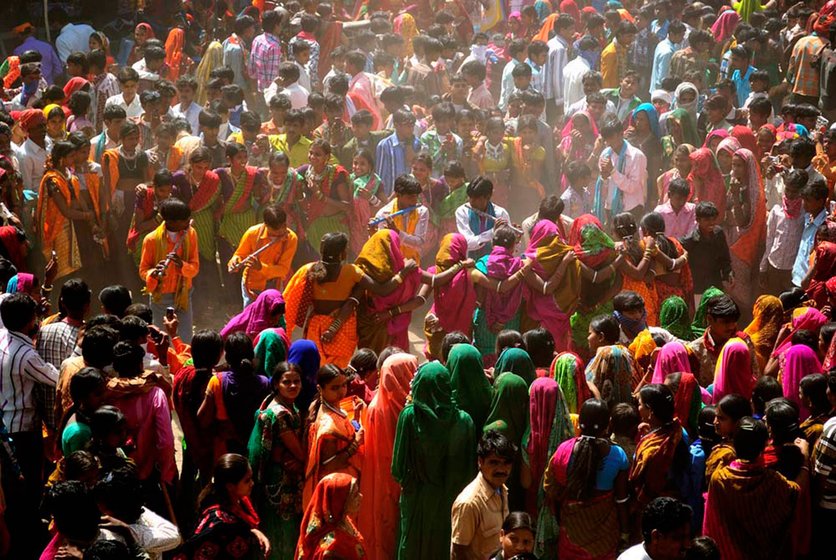 Left: A Budliya, resplendent in fancy attire – this is a character in a group dance called Goth that is enacted just after the Holi festival in March. Right: Adivasis in Bakhatgarh village dancing during the colourful Bhagoria festival, which celebrates the kharif harvest just prior to Holi in spring

Some of the photos for this essay were taken by Magan Singh Kalesh, a member of the Khedut Mazdoor Chetna Sangath.

Rohit Jain is a Delhi-based freelance photographer. He was a photo sub-editor at the Hindustan Times from 2012- 2015.

Other stories by Rohit Jain