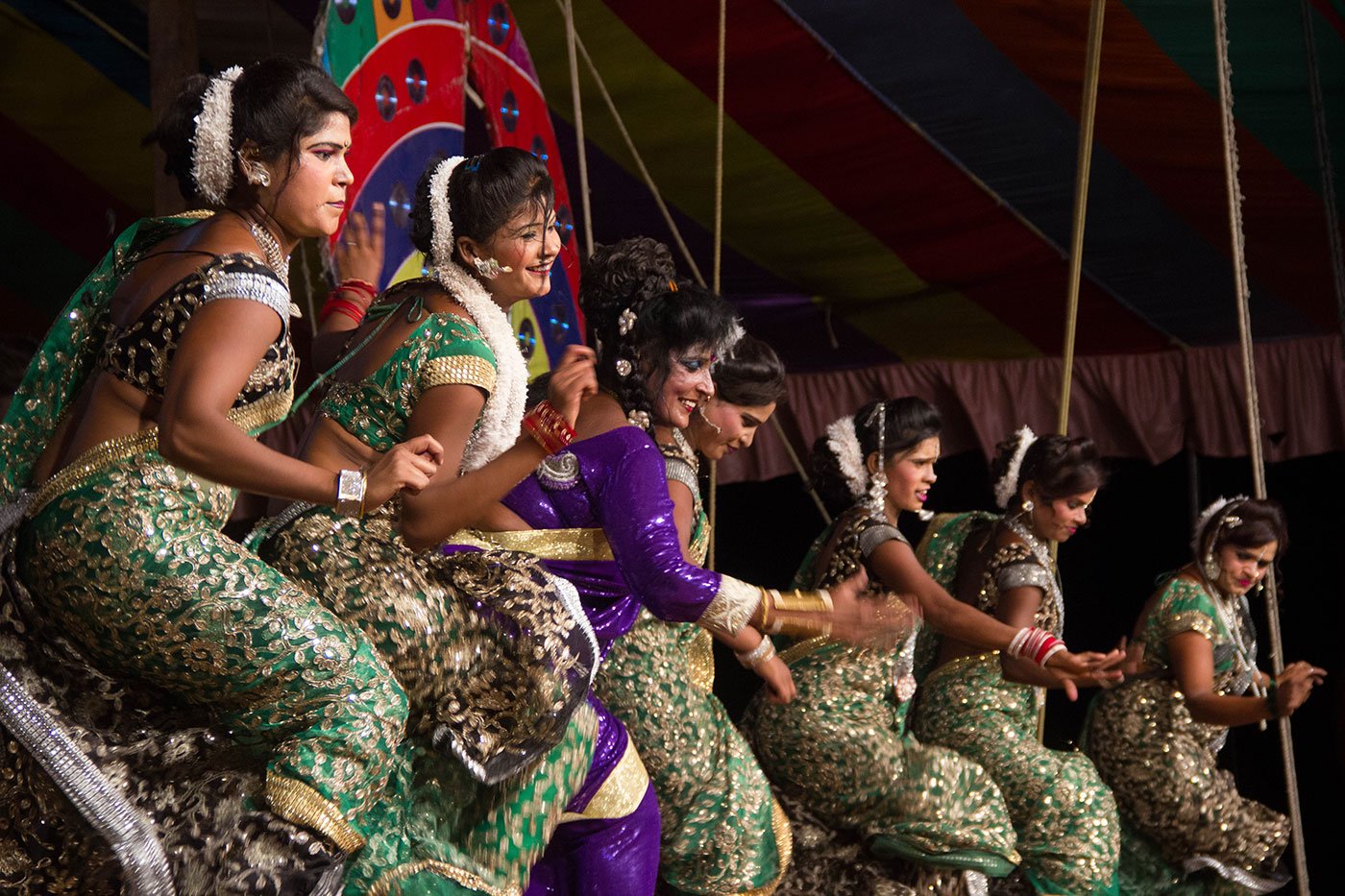 Changes in technology, in audience tastes, shrinking performance spaces – have all impacted the tamasha. Troupe owners have mixed feelings – is the tamasha in danger or will Mangala Bansode's art form survive?

“The taste of the public has changed, we haven’t,” sighs Mangala Bansode. The audience now demands popular Hindi songs, she says. “There may come a time when we have to use a [Bollywood] hit song even for Shivaji Maharaj’s entry!” she laughs.

Not only has Mangalatai observed the changing preferences of viewers, over more than half-a-century she has also seen the tamasha itself transform from small ensembles travelling on bullock carts with around 10 men and women, into the elaborate productions that her troupe now handles.

Mangala Bansode, 66, has been in the business since she was seven. She is the oldest daughter of tamasha legend Vithabai Narayangaonkar, who was based in Narayangaon in Pune district, considered the hallowed ground of tamasha . Since 1983, Mangalatai, who now lives in Karavadi village in Satara district, has run her own phad (troupe) of about 170 people. The ‘Mangala Bansode and Nitin Kumar Tamasha Mandal’ (Nitin Kumar is her younger son, singer-actor-dancer and the star of the troupe) performs in the villages of Maharashtra from September to May every year. (See ‘ Tamasha is like a jail that I want to stay in ’.) 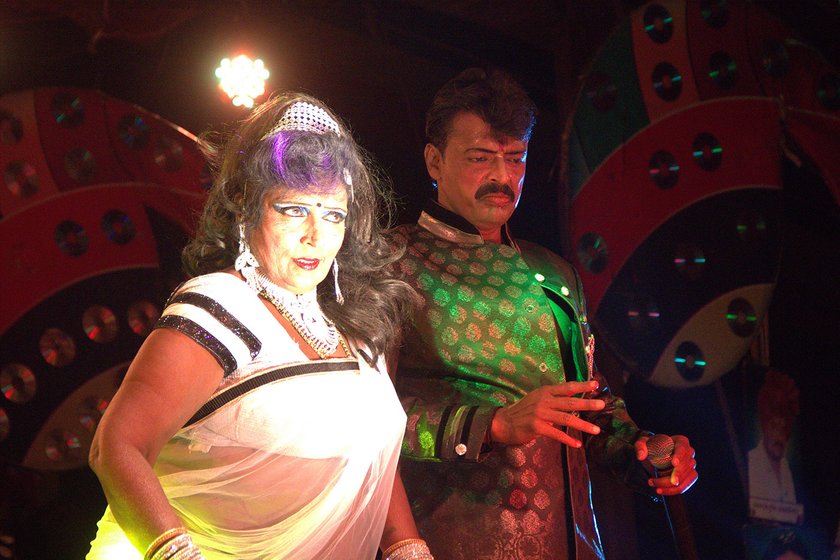 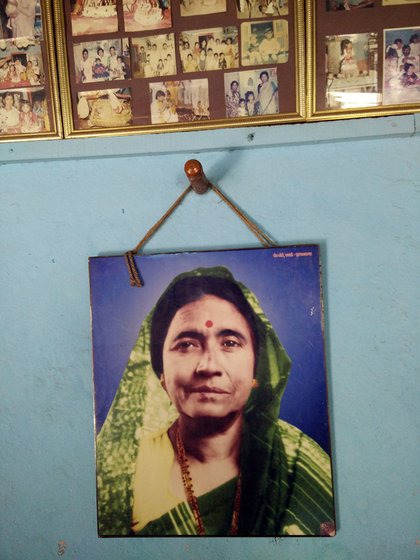 The troupe performs on a stage set up by the labourers in Mangalatai’s crew in every village they visit. Such shows are usually held under a tent when they are ticketed, and in the open when a show is commissioned by village jatra (fair) committees. Between 1,000 to 2,000 people come to watch, and for the non-ticketed commissioned or 'supari' shows, the audience numbers can go up to 10,000-15,000.

From a Re. 1 entry ticket in 1970, the price is now Rs. 60, but, troupe owners say, profit margins are falling. Salaries have gone up manifold, and production costs have increased exponentially, with trucks, buses, arc lights and other equipment added on to the travelling troupe.

Meanwhile, the number of viewers, Mangalatai says, has decreased. One reason is the changes in technology. Many now watch films on television or mobile phones. In Narayangaon, the performances during the jatra in April every year are broadcast on a local television channel. “Who then wants to leave their homes and come out to watch a tamasha for three hours?” asks Mangalatai.

From a Re. 1 entry ticket in 1970, the price is now Rs. 60, but profit margins are falling. Salaries have gone up manifold, and production costs have increased exponentially

Watch video: An opening prayer, dance routines and folk drama are all part of a tamasha performance

The performance space for tamasha has also shrunk to mostly rural areas. In the past, en route to various villages, the Bansode troupe would also stop by for shows in all the major towns of Maharashtra, including Dhule, Jalgaon, Nashik, Satara, Sangli, Kolhapur, Solapur, Parbhani, Nanded, Osmanabad and Beed. They even had shows in Pune city. All these are now few and far between, or entirely absent. “Earlier we had shows in the zilla [district headquarter] towns; now we just run around different talukas ,” says Anil Bansode, Mangalatai’s older son and the phad ’s manager.

In its glory days, till around the 1990s, tamasha was also performed in Mumbai; troupes would travel to the outskirts of the city and arrange several shows during the September to May season. Raghuvir Khedkar, a renowned tamasha artist and troupe owner, says his group’s last programme in Mumbai was around two decades ago. The shutdown of the textile mills, he says, was a contributing factor, when the Marathi-speaking audience – the former mill workers – thinned or moved out of the city. Khedkar, 56, from  Chinchghar village of Khed taluka in Ratnagiri district, began working on the stage in 1970, when he was nine. His troupe, ‘Raghuvir Khedkar sah Kantabai Satarkar Loknatya Tamasha Mandal’ was started by his mother Kantabai in 1969. 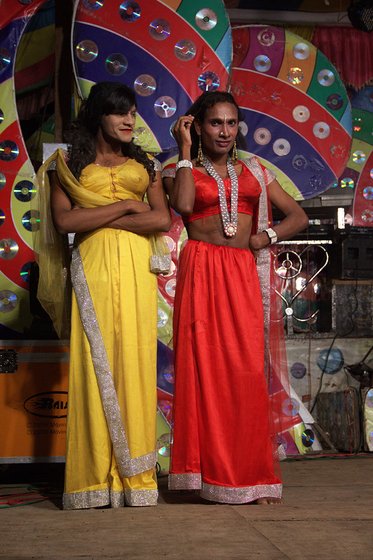 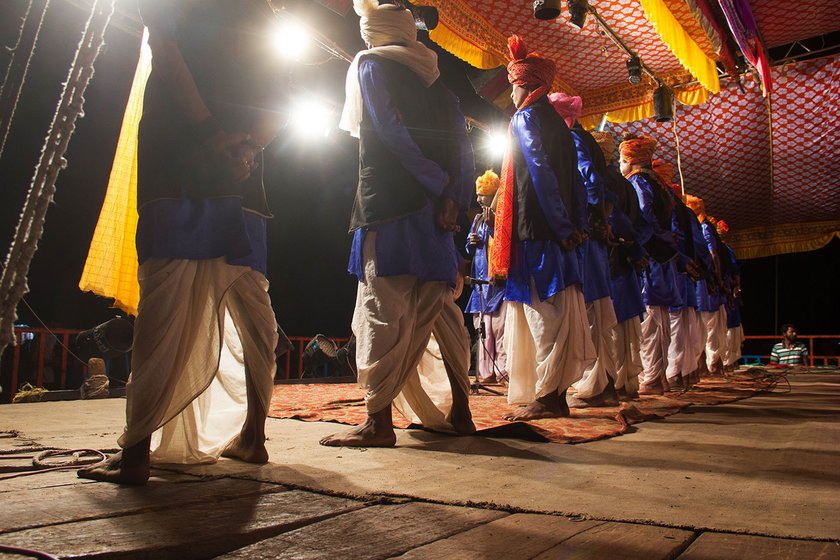 Government regulations have also curbed the tamasha , troupe owners say.  “Our shows used to [start at  around 11 p.m. and] go on till 6 a.m., and people would watch attentively throughout,” says Anil Bansode. The noise-related rules (starting with the Noise Pollution Regulation and Control Rules, 2000), he says, have confined the tamasha to rural areas. The rules now disallow the troupes from performing after 10 p.m. even on the outskirts of cities. This has altered the structure of the tamasha , since troupe owners reduce the number of items to shorten the duration of the show.

"There is little space for the performances anymore,” Khedkar says. “But also the noise the tamasha now creates with the big sound systems is disgusting. It’s not wholesome anymore. There is too much yelling, huge speakers. This has been going on for the past 20 years. Before this, there were a few trumpets for an audience of 3,000. The public wasn’t rowdy and noisy like it is now, they used to sit quietly." 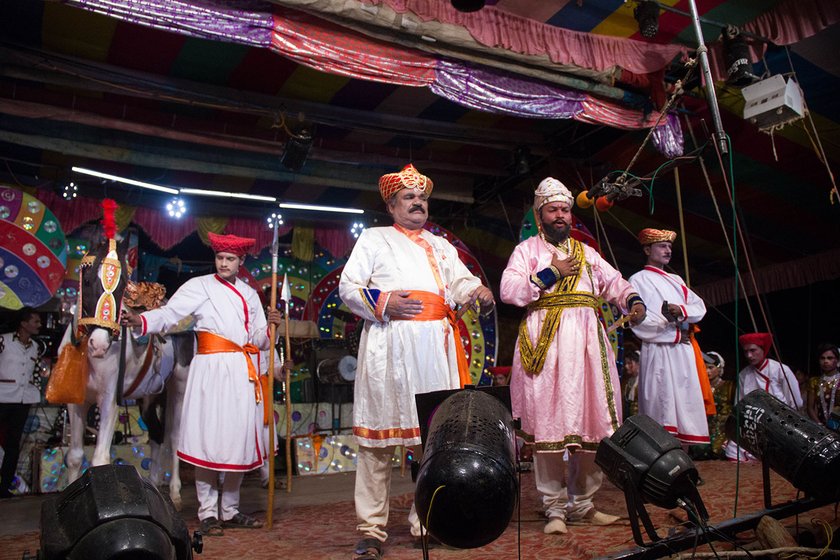 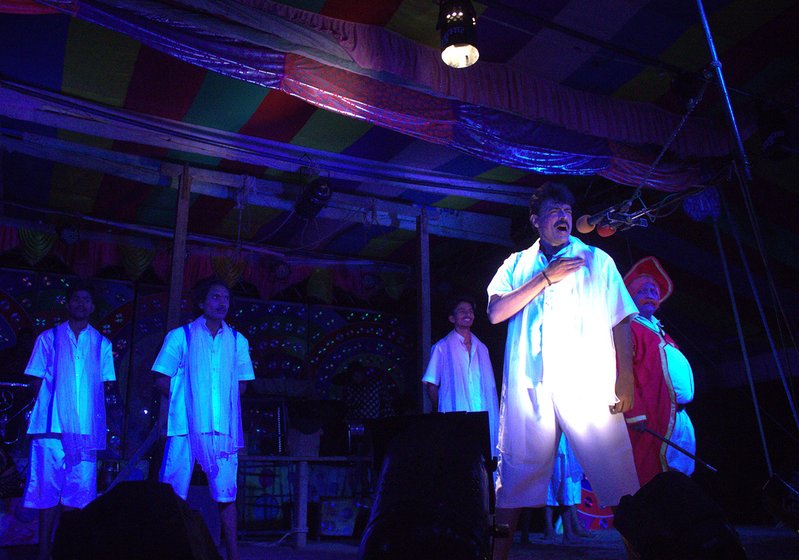 But perhaps the biggest change in the tamasha is in its very content and performance. The typical components of a traditional tamasha are gan (an opening prayer to Lord Ganesha) , gavlan ( a dance based on the interaction between Krishna and the Gopi s ) bataavni ( a comedy sequence ), rangbaazi ( a dance medley ) and vag natya ( folk drama, usually on social issues or depicting mythological tales ). Though these components and sequence still usually remain, as do several rituals of the traditional performance and music (for example, tradtional instruments like the taal , tuntuna , dholki , and halgi still accompany the gan ), the execution has altered over time. The tamasha has turned into a ‘variety entertainment’ type package, a dance-drama extravaganza.

Sandesh Bhandare, a Pune-based photojournalist who has written a book about the tamasha community, says the troupes have been eliminating the vag natya skits about social issues such as say alcoholism or dowry demands, while retaining, by public demand, rangbaazi based on Hindi and Marathi songs. Bhandare photographed the tamasha in various districts of Konkan, Marathwada, and Vidarbha around 10 years ago, and went back this year to observe the changes.

Watch video: Mangala Bansode, 66, remembers a time when they lit the stage with just two bulbs

“Now when we perform in rural areas, we have to include cinema songs. We have to drop the vag natya then,” Khedkar too says. “The audience who enjoyed the vag has stopped coming for our shows. We have lost approximately 25-50 per cent of the audience.”

He reminisces of a time when the public truly appreciated and respected tamasha as an art form. “When I started my phad , the quality of our art was superior, and we had the scope to display a range of talents,” Khedkar says. “Some parts of the tamasha used to be extempore, some parts used to be prepared beforehand. We could improvise on the go. That was fun.” Khedkar used to include classical music and dance in the tamasha , and the thumri, ghazal and qawwali . These too are not performed anymore.

To counter the technology that’s been keeping away audiences, Khedkar ‘modernised’ his production. “We used to perform plays from fictional accounts, or stories [with themes related to] religion or royalty. Then we switched to ‘real’ stories, like the ones in newspapers,” he explains – dramatic accounts of dacoits and Robin-hood-like figures or about gender issues like dowry and violence against women. 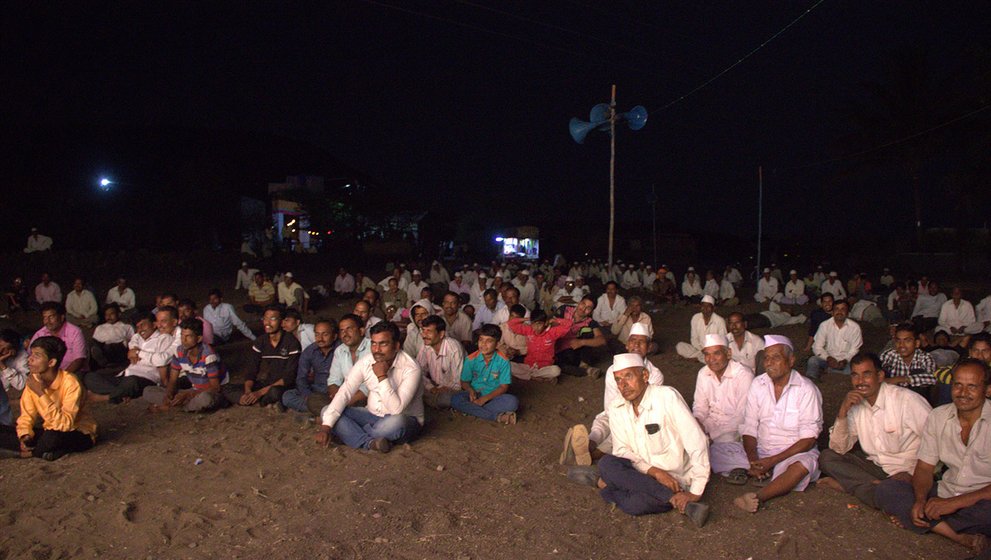 Khedkar’s troupe also brought in electronic instruments (such as a drum set, rhythm machine and digital organ), lighting, fancy costumes, and different ways of doing make-up. He realised that the youth had gone away from tamasha , which still had women in traditional nav-vari (nine-yard) saris. “We started performing songs that young boys would like,” he says. (The audience is mostly male; some women do sometimes attend in small numbers, usually sitting at the back). “ Tamasha is a form of entertainment that changes with the times. Just as cinema changes, so does tamasha ,” Khedkar adds.

Other troupes started copying the changes he was making, but these eventually proved to be destructive. Although Khedkar thinks the changes were inevitable, he says, “Where the audience used to appreciate fully clothed women, the women are now dressed in skimpy titillating clothes. This must stop. Now the public is not in my control, my time has passed. The new generation that has come has to rectify this. The tamasha is in danger.”

And so, when Mangalatai takes the stage even now, bringing to it her immersion and belief in the art, and when the arc lights, her shimmering costume, make-up and expressive enactment cover the fact that her ageing knees keep her from cavorting around the stage. It is then easy to forget that she is 66, and may be one of the last legends of the tamasha .