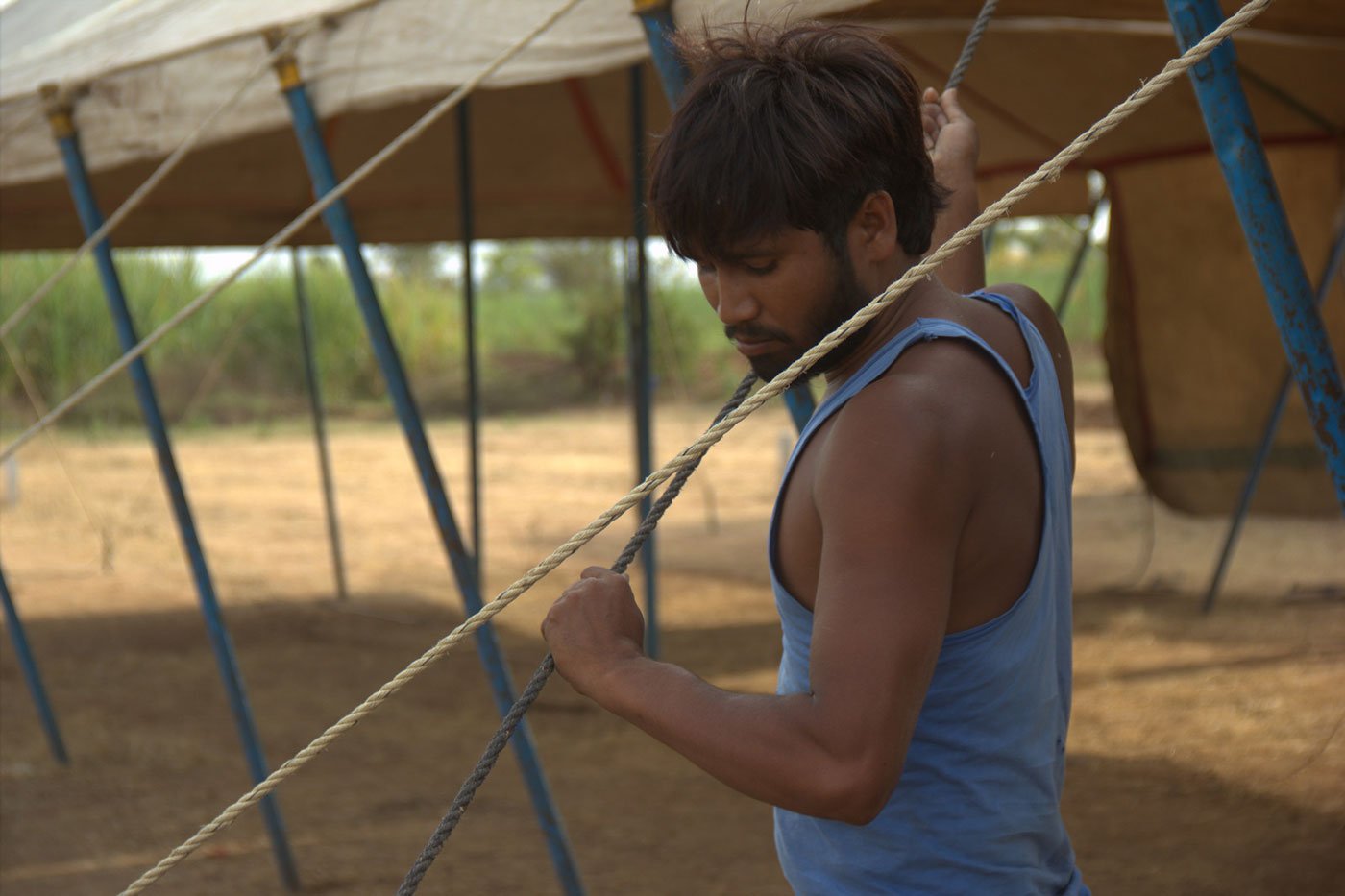 Days and nights of toil on the tamasha circuit

For labourers from villages in UP who travel with tamasha troupes in rural Maharashtra, the work is constant and strenuous, meal and rest times are erratic. But this job helps them save for expenses back home

It is 2 a.m. on a cool April night in Savindane. The open ground opposite the temple in this village in Pune district’s Shirur taluka in western Maharashtra is alive with women dancing to a Bollywood number, under flashing, coloured lights. But Lallan Paswan and his band of co-workers pay no attention to the performance. They saunter away to find a place for a brief nap, away from the audience of cheering men and the blaring loudspeakers. Some of them pass the time by watching a movie on their phones.

“This work is very tiring. We stay up through the night, the owners demand that we work all the time,” says Lallan Paswan. Now around 19, Lallan ( in the cover photo on top ) has been working with the ‘Mangala Bansode and Nitin Kumar Tamasha Mandal’ since he was 13. He is among a crew of 30  labourers – most of them from Dalit communities, their ages ranging from 15 to 45 – from Malihabad tahsil in Mal block of Lucknow district in Uttar Pradesh. The men in this group are all related to each other or part of the same social networks back home.

They build the stage and tents for the performances as the tamasha troupe moves from one village to the next. And they do this at least 210 times from September to May, in an eight-month season of tamasha – a folk art form of Maharashtra performed on an outdoor stage set up in a different village every day. It is an entertainment package of song and dance, skits, and a long play. The troupe includes artists, labourers, drivers, wiremen, managers and cooks. 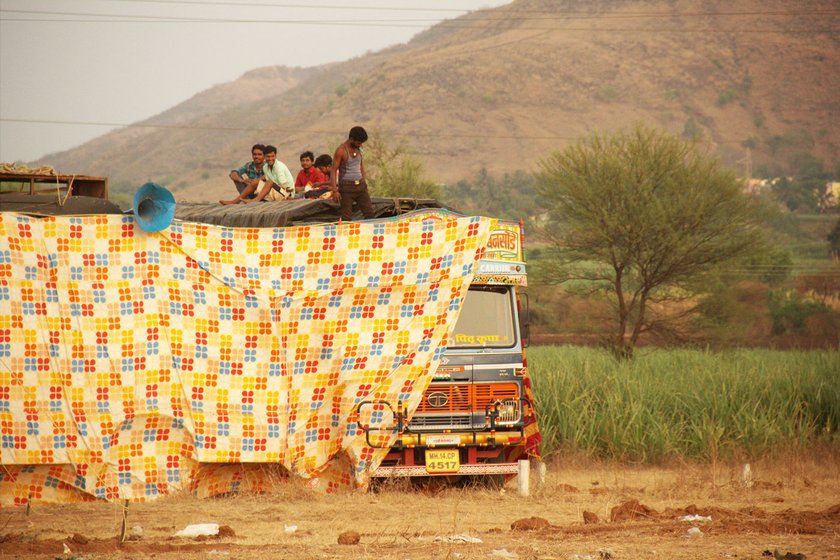 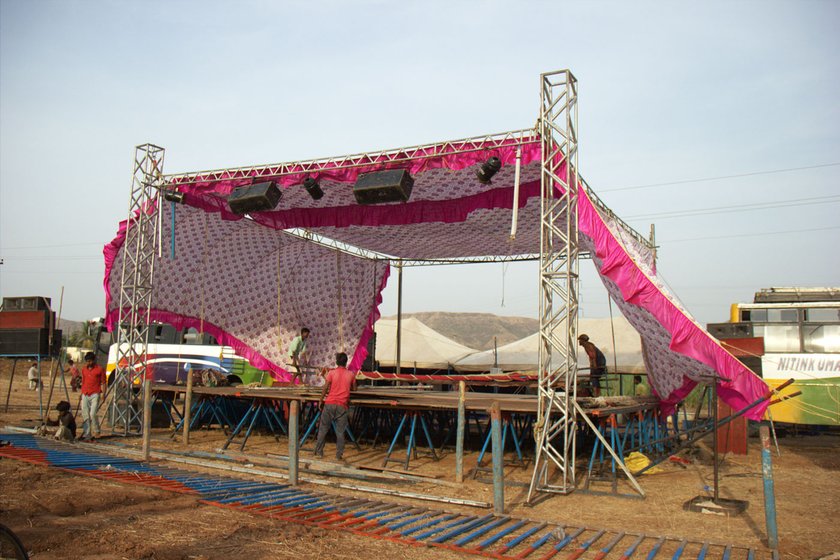 Lallan got this job through a friend in Aumau, his village. Before that, he had worked in Lucknow as a mason. But work was intermittent and the money was inadequate.  Now Lallan, who left school after Class 5, earns Rs. 10,000 a month as the ‘manager’ of the group from his village. He also brings workers, when required, into the troupe. “If we see a boy wandering around the village aimlessly, not studying or working, we bring him with us to become a labourer,” he says. “We think this is an opportunity for everyone to work together and make money.”

The tamasha troupe owners too prefer labourers from Uttar Pradesh. The troupe’s manager, Anil Bansode, says, “They are hard-working and there is little chance that they will abandon us midway.” Another possible reason for the troupe owners’ preference is that the UP workers agree to work for lower wages, says Pune-based photojournalist and tamasha researcher Sandesh Bhandare.

Constructing the stage is tougher than the other tasks, Lallan and his co-workers say. Once the trucks carrying the material reach a village where a show is scheduled, the labourers start unloading the wooden planks, the metal frames and the electrical equipment for lights and sound. They start making the stage with a series of metal supports, on which wooden planks are fixed. Then they put up the frame that will support the roof of the stage and electrical equipment. The stage has to be strong enough to hold musical instruments and 15-20 people at a time. Sometimes a motorbike or a horse are also part of the act, and the stage must be strong enough to take this additional weight. 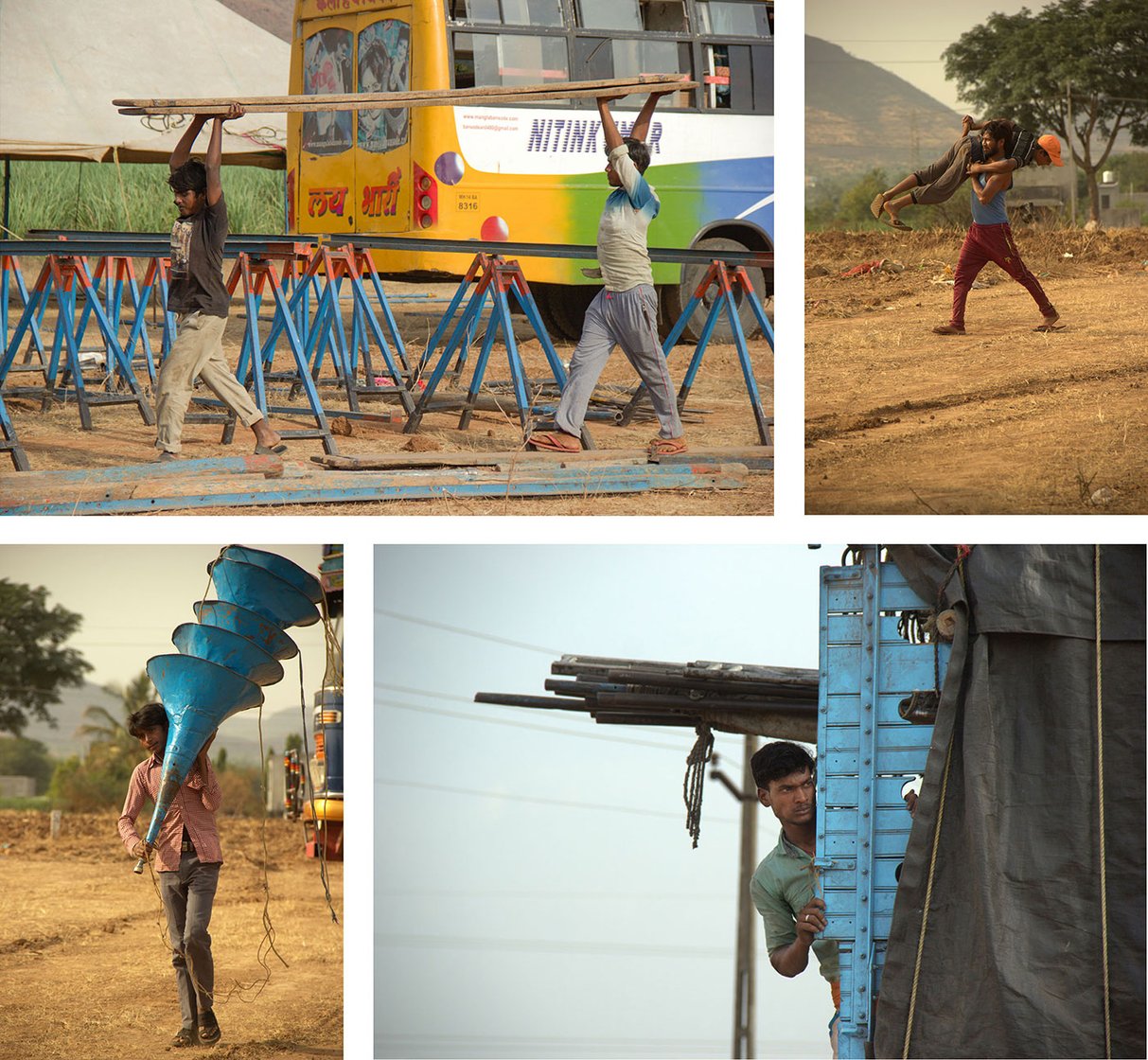 “The entire group that builds the stage has to stay up till the tamasha ends, that’s what the owners demand,” says Lallan, who is responsible for the group of eight labourers which build the tents. “But the owner doesn’t check or interfere [with our work], he just gives us basic instructions. This work is our responsibility completely, and we take care of it,” he adds, with pride.

Four men have the task of setting up the metal barricades near the stage that keep the audience away. During ticketed shows, an additional 10-12 men set up a large tent which houses the stage, and they also put up the gates leading up to the tent. One labourer takes care of the generator, which is indispensable to the show given the erratic electricity in rural Maharashtra.

The labourers also help the troupe with security. Santram Rawat, 20, who too is from Aumau village, is in charge of the generator. He also pitches in with managing the audience when they get unruly. “When people try to get into or tear the rahuti [tent, of the female artists] we have to beg them to be civil. We explain to them that they shouldn’t do this,” says Santram, who has been with the troupe during show seasons for five years. “ If there’s a drunkard we hit him 2-3 times and make him leave.” 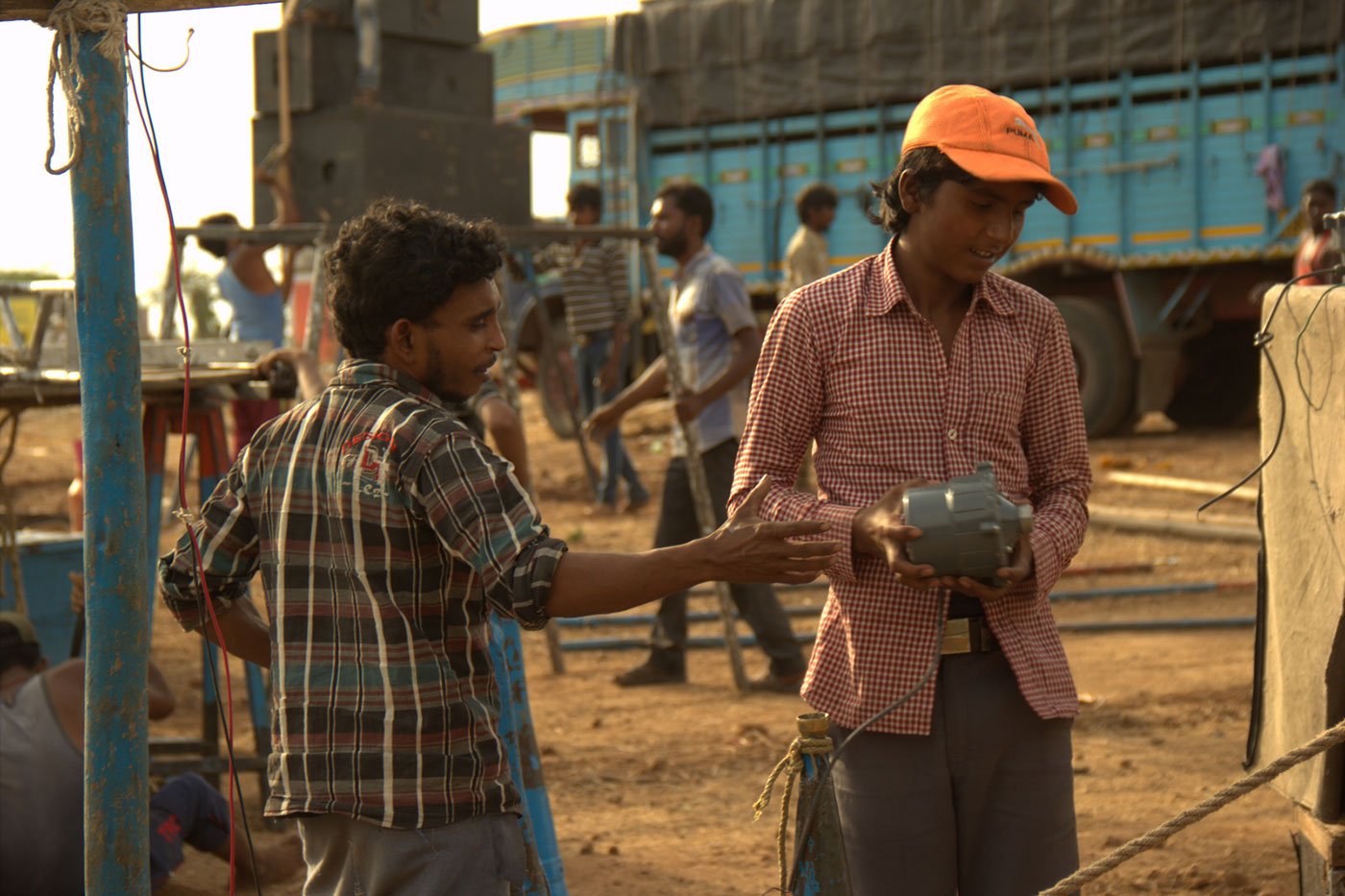 Santram Rawat (left) guiding Aravind Kumar about sound equipment; both are from Aumau village in UP

The workers’ time to rest is not fixed.  The performance start by 10 or 11 p.m., and when they end by around 3 a.m., sometimes even at 5 a.m., they have to swiftly pack up the tents, stage and equipment. When the show is ticketed (and not commissioned by the village in advance, in which case it is free to the public) they have to also pack up the ticket counter. Once everything is loaded in the troupe’s trucks, the labourers climb into the cramped space and try and sleep. The trucks, along with the buses ferrying the artists, transport the entire troupe to the next village. Once there, by around noon, the labourers set up the tents for the artists to rest in and change costumes. They then catch up on some sleep or bathe and eat. And then, once again, by around 4 p.m., they start building the stage.

When constantly on the move, food is a problem too. “None of the boys [labourers] like this food. We eat wheat rotis and rice at home. Here we have to eat bhakri [made of jawar or bajra ],” Santram says. “On top of that, everything is stuffed with groundnut and coconut,” adds Lallan, as all the others nod. “We don’t use either in our dishes. But we can’t be picky, we have to eat it.”

The meal timings too vary vastly.  “Sometimes we get food at 10 a.m., sometimes at 3 p.m. There is no fixed time. By the end of the season our body is wasted,” says Lallan. “We eat if we get food on time, otherwise we have to dismantle and pack on empty stomachs,” adds Sarvesh, 18, Lallan’s younger brother.

Despite these difficulties, the labourers prefer the tamasha because it is steady work and income. They earn Rs. 9,000-10,000 per month for the eight months that they are with the troupe, though raw new recruits might earn just Rs. 5,000. 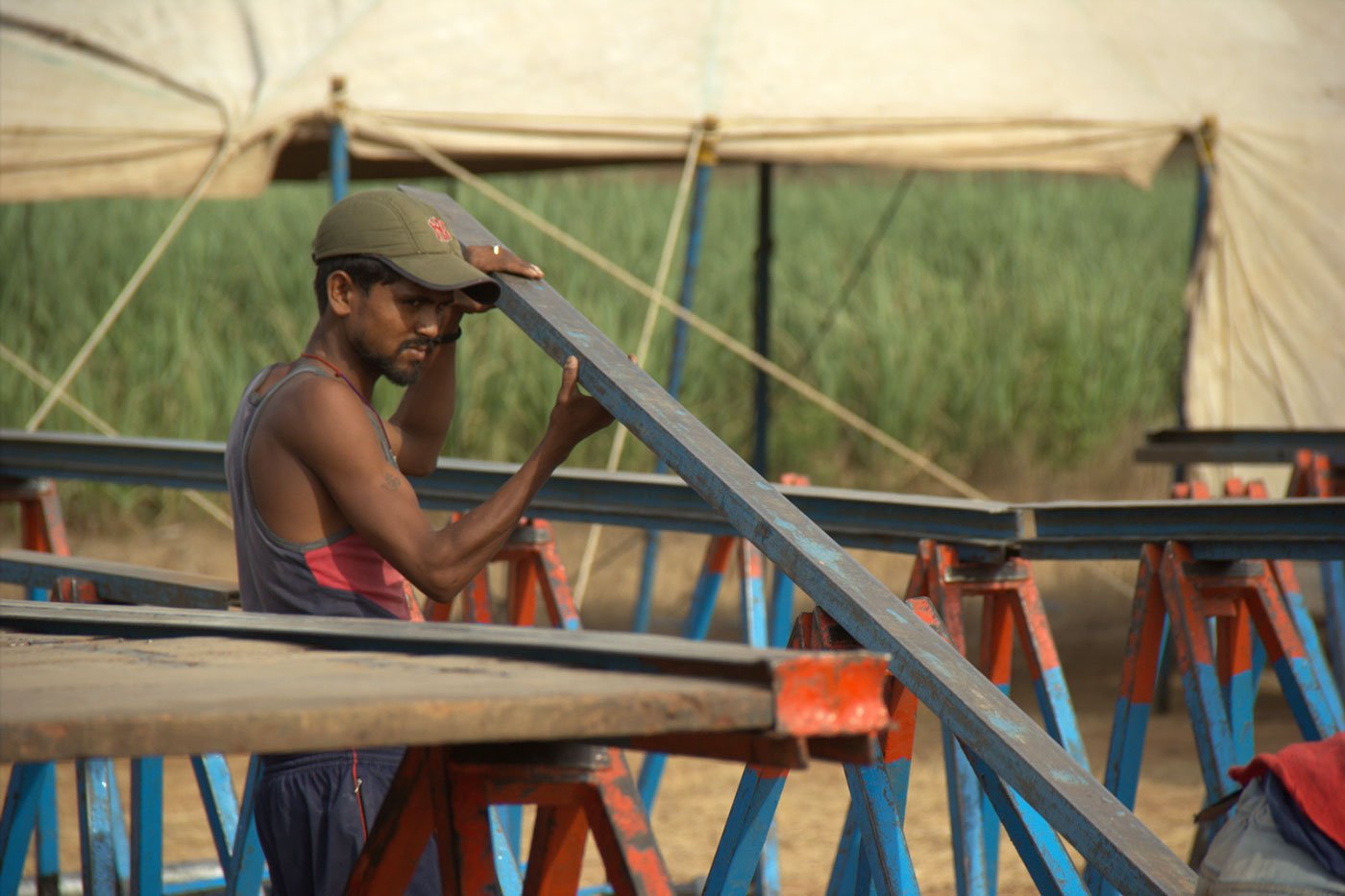 Sarvesh dropped out of school when he was in Class 11, tired of being told that his family did not have money. “I thought that I rather earn and have my own money than ask for it,” he said. Their father is also a labourer with the troupe, and their youngest brother works here as a helper. After expenses, the family will together take back Rs 1.5-2 lakhs after eight months. This year’s tamasha earnings will be used for Lallan’s wedding and to rebuild their house.

Each labourer gets Rs. 50 for daily expenses. This amount is deducted from their monthly payment. Most of it is spent on extra food (other than the two meals a day they get as part of the troupe). Some also use the allowance for tobacco or alcohol “I don’t drink, there are 5-6 men here who do,” Lallan says. His father is one of them. Some of the men are also addicted to ganja . “These men find ganja and alcohol faster than we can find provisions,” laughs Sarvesh.

Another reason the workers continue enrolling with the tamasha troupe is the chance to travel. “We are in a new place every day, so we have a new village to explore. It would get boring if we stayed in one place,” Lallan says. 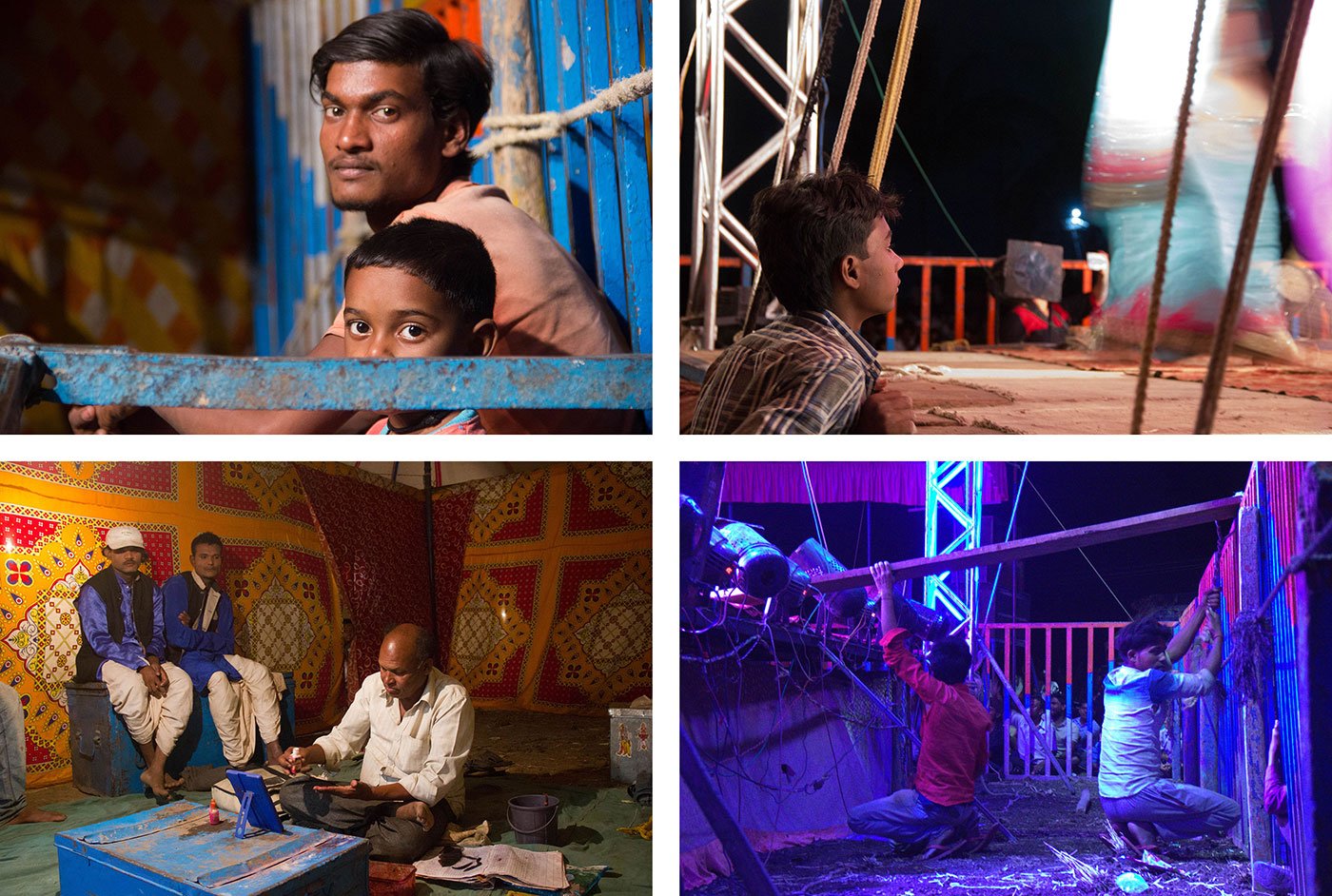 Top left: Shreeram Paswan, a labourer from Aumau village, watching the tamasha in Gogalwadi village of Pune district. Top right: Wireman Suraj Kumar watching the show in Gogalwadi. Bottom left: Some labourers like Anil Pawra (extreme left) also double up as backup singers and dancers in the tamasha (this photograph was taken in Savlaj village, Sangli district). Bottom right: Labourers hold on to the plank that's supporting a dancer in May 2018 in Savindane village of Pune district

But most of the labourers don’t tell their families that they work with a tamasha . “We have told people in the village that we work with an orchestra or DJ company which also has dances. They will consider working in the tamasha undignified,” says Lallan. They don’t work in a similar show called the ‘ nautanki ’ in rural Uttar Pradesh because of the disrepute associated with the dancers, he adds. “Unlike in UP, people here respect this art.”

When the tamasha season ends in May, all the labourers return to Aumau for the mango season. This region’s mangoes are sent across the country and also exported, Sarvesh says proudly.  Seven varieties of mangoes grow in our orchards, adds Santram.

This is also their time to rest and recuperate.  “We need to rest when we go back from here. We become fit again after two months of being back in the village. We eat mangoes, we don’t do much work. Eat-sleep-wander-repeat,” says Lallan.

Like most of the men in the group, Lallan and Sarvesh’s family own land, where they grow wheat for their own consumption, and mangoes for the market. “We have land as much as a tamasha ground. That's about one acre,” says Lallan. Their father’s brother cultivates the field, from which Lallan's father gets a share, around Rs.60-70,000, each year. Sarvesh and Lallan pick mangoes for a few hours every day, send them off to the mandi , and go back to resting. 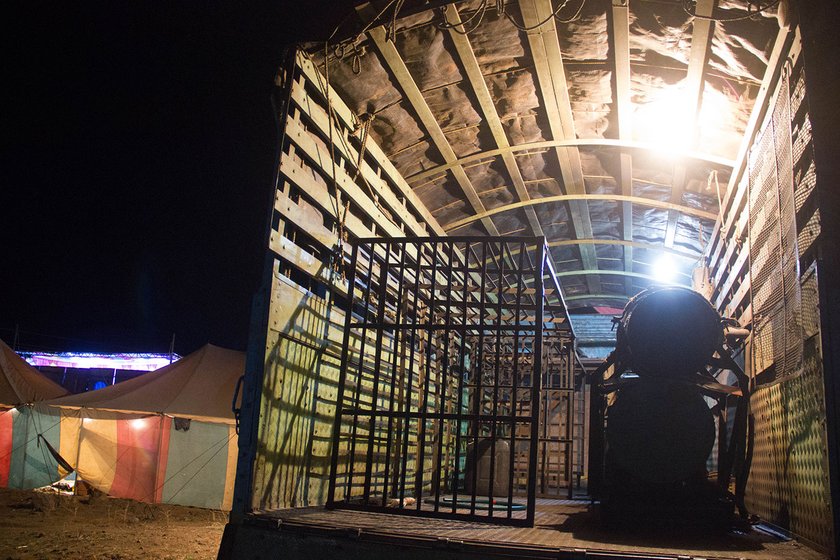 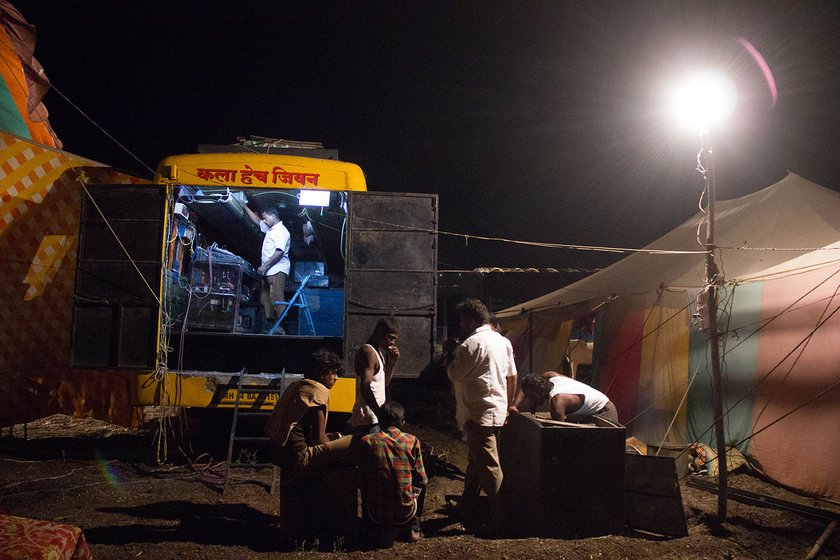 The labourers also maintain the generator that powers the tamasha's lights and sound; in this instance, in Savlaj village of Sangli district

“We can earn the required annual income from this land. But if we stayed in the village we would end up spending our earnings every day. We get our earnings as a lumpsum amount here, there is no scope for expenses. With this sum we can make our house, pay for weddings…” explains Lallan.

He sometimes takes up small jobs when he is back in his village. His options are daily wage labour in Lucknow, agricultural labour in the village or MNREGA work – which will pay him around Rs. 200 a day. But work is not available every day. “Sometimes, we  have to wait from 8 a.m. to 5 p.m. without work…” he says, with a laugh.

But  Lallan says he will not return to the tamasha troupe next year, after he is married. “I’ll find some work in the village…I can do everything. I can stitch clothes too,” he says, adding that his wife-to-be is a seamstress and has a BA degree.

Santram, who is getting married too when he goes back home, says, “I will settle down in the village. I plan to set up a shop there, maybe a grocery store. Who will take care of the wife and mother if I come here? I was coming only because I was unmarried.”

Sarvesh says he too might stay away from the tamasha and instead go to the big cities,  to Chandigarh or Mumbai. “All I need is proper food and sleep. Once we leave home, we are ready to work anywhere…”