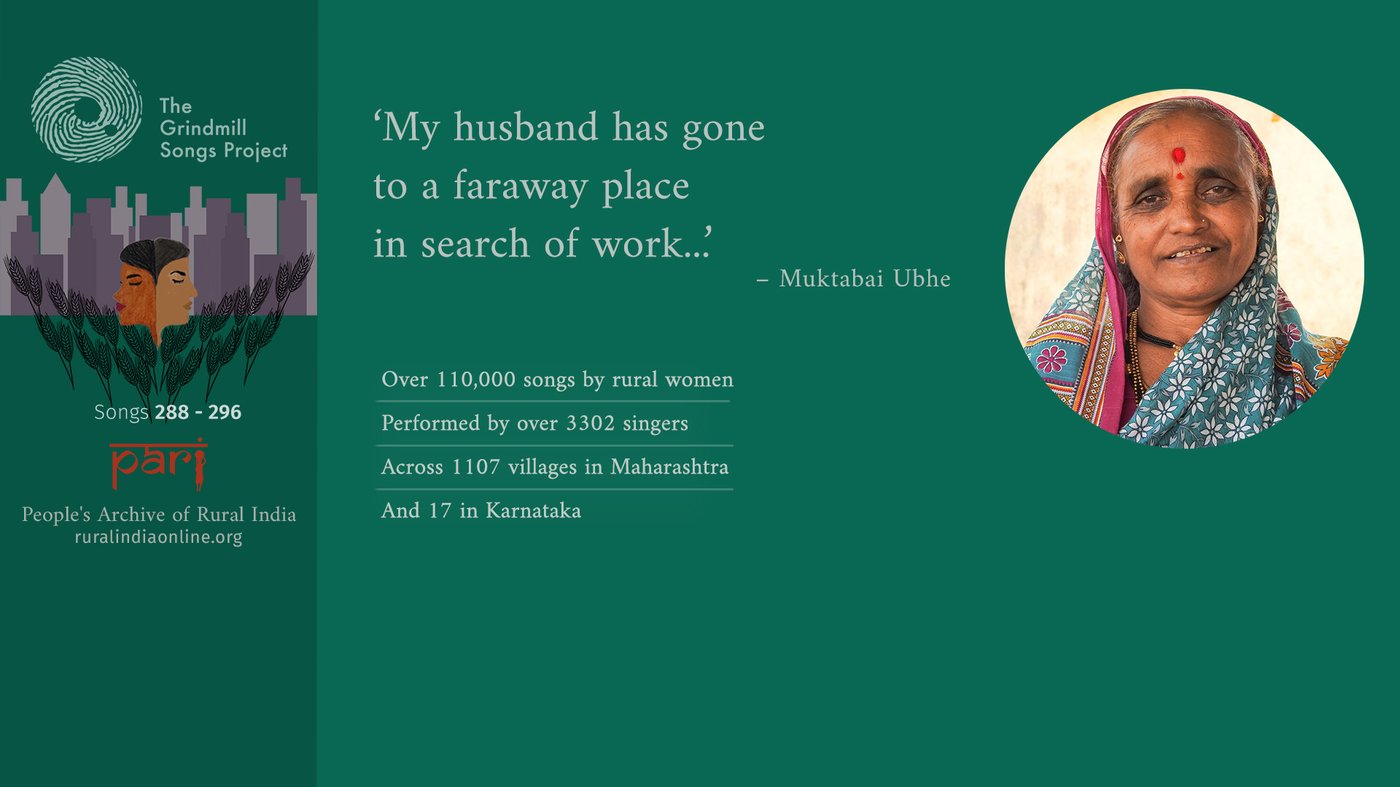 Songs of love for the migrant away from home

Muktabai Ubhe of Khadakwadi hamlet in Mulshi taluka , Pune, sings nine ovi about a wife’s love and longing for her husband, who has gone away in search of work

We didn’t get a good harvest this year
O woman, my husband has gone to a faraway place in search of work

“Yes, I remember singing these songs many years ago,” said Muktabai Ubhe, when we spoke on the phone in late April this year. Muktabai, who lives in Khadakwadi hamlet in Pune’s Mulshi taluka , had sung these ovi in 1996 for the original Grindmill Songs Project (GSP) team.

In these times of the Covid-19 pandemic and lockdown, the nine couplets sung two decades ago now resonate with the experiences of migrant workers across India, separated from their families in the villages. Like the absent husband of these ovi , the migrant workers too had left their homes in the countryside and travelled to faraway towns in search of work.

Before mechanised mills reached the villages of India around the 1980s, women used to crush grain in the stone grindmill to make flour every day. They worked in twos and threes, in the kitchen or nearby, singing together in their private zone of comfort. There they expressed themselves freely, away from prying eyes and social restrictions. In simple, rhyming ovi, they sang to the rhythms of the grindstone and the jingling glass bangles on their wrists.

Muktabai learned these ovi as a young married woman from her mother-in-law. The couplets express a woman’s feelings of love and longing for her husband – the migrant worker who is far away. When Muktabai sang them in 1996, she was around 40 years old.

Now 64, she laughed heartily when we spoke about the ovi describing the pearl-like lustre of the husband’s eyes, and the blue shade of his skin like the javas (flax) flowers. “I have never seen javas flowers,” Muktabai said, “but in the ovi , the wife praises the husband with much fondness.” 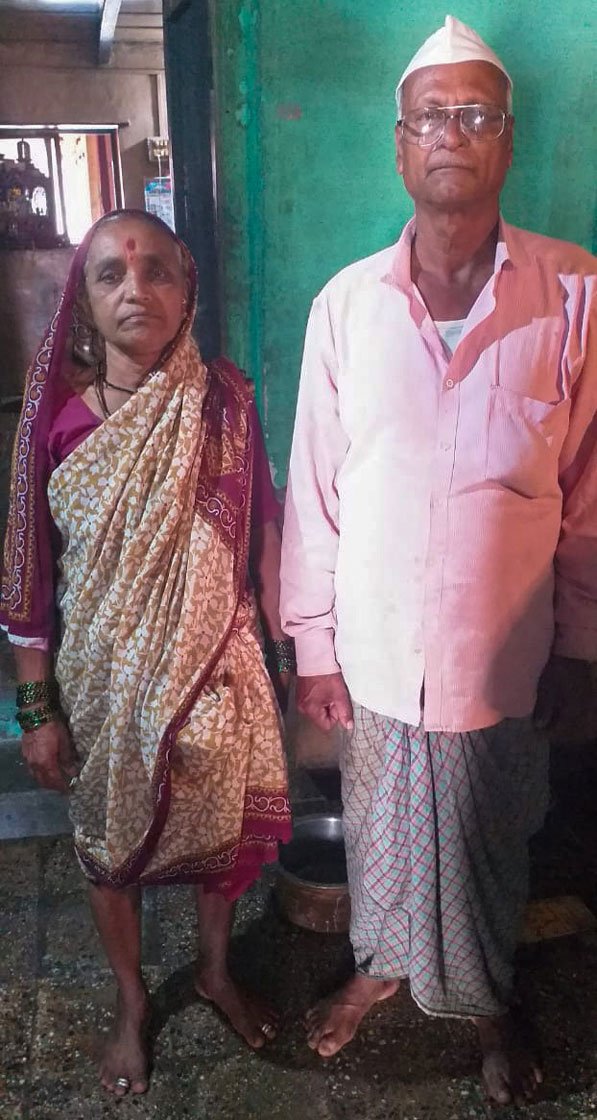 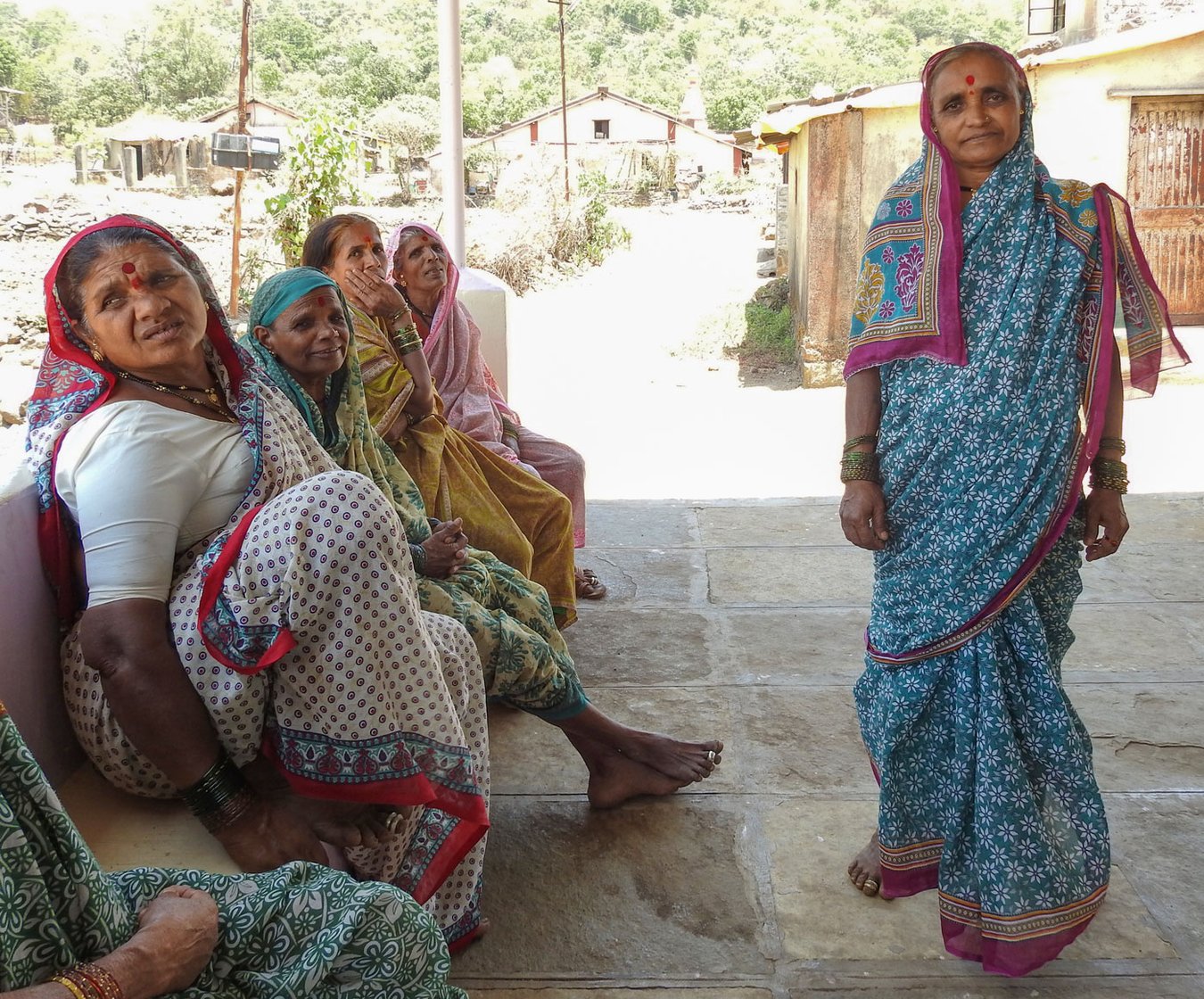 We spoke about the pandemic and the lockdown. “Everything has shut down because of corona. My husband and I work a little on our farm, but we are both getting old now. We do what little we can,” she said. She and her husband, Gulabbhau Ubhe, who is in his late 60s, own two acres of land in Khadakwadi, a hamlet of Kolavade village. Their son Amol works at an autoparts factory in Urawade, about 20 kilometres from their village. He was at home when the lockdown started in March, but he was called back to work on May 4. The couple’s three daughters are married and residing in different parts of Pune district.

Muktabai is the chairperson of the bachat-gat (self-help group) in her village. “But, like me, most women in the village have no time to spare from their own farm and household work. I merely collect the money from everyone and put it in the bank. There is not much benefit from this post – it is in name only,” she said.

About three years ago, when the PARI GSP team visited Kolavade, Muktabai told us how fond she was of reading books. “I have read Shriman Yogi by Ranjit Desai, and Pandav Pratap Hari and other religious books,” she had said.

We met her and five other singers in the large assembly hall of the Ram temple in Khadakwadi. The breeze blowing from the three open sides of the hall brought us relief on that hot day in April. The fruit-laden branches of the mango trees outside were swaying. The women sang a few ovi about the summer heat and the much-awaited monsoon. We published these songs on PARI in two instalments – Seven songs of summer and Six songs of rain .

In all, 25 women from Kolavade sang 1,265 songs for the original GSP team led by the late social scientists Hema Rairkar and Guy Poitevin. We bring here nine of the 53 songs sung by Muktabai Ubhe, recorded on January 6, 1996.

Watch video: ‘My husband has gone to a faraway place in search of work…’

In the first ovi , the wife worships the deity in her home shrine and prays for the long life of her kunku – the vermilion applied on her forehead, symbolising her husband. In the second couplet, she prays to the pimpal (sacred fig) tree because it represents Lord Vishnu, and asks for a happy married life. In the third couplet, she says that Sukhadeva (god of the morning star) is positioned in the dawn sky above her home, bringing  a cool breeze that stings her body.

In the fourth and fifth verses she says that the harvest was not good that year, so her husband had gone far away in search of work. She worries that there is no one to take care of him in that faraway place. These songs tell us of her deep love for her husband and how much she misses him.

In the sixth, seventh and eighth couplets she recalls her beloved and describes his features. His eyes shine like the lustre of pearls, his skin is blue like the javas flowers. (These flowers are often used in ovi to describe the colour of Lord Krishna’s skin.) She sings that her husband’s teeth are as white as washed rice. Without him, she is distraught and lost. And the roasted green chickpeas, his favourite, are all becoming dry.

Listen to these nine ovi :

I am a suvasina [married woman], and worship the god in my house
I pray for the long life of my kunku [husband]

I am a suvasina praying to the pimpal [sacred fig] tree
Lord Vishnunarayan, give me a happy family life

It is early morning, Sukhadeva [god of the morning star] has come above the house
How the early morning breeze is stinging the body

We didn’t get a good harvest this year
O woman, my husband has gone to a faraway place [in search of work]

Dear husband, your teeth are like washed rice
I am distraught and lost without you

I roasted green chickpeas for you, because you like it
What can I tell you, O woman, it is all drying up 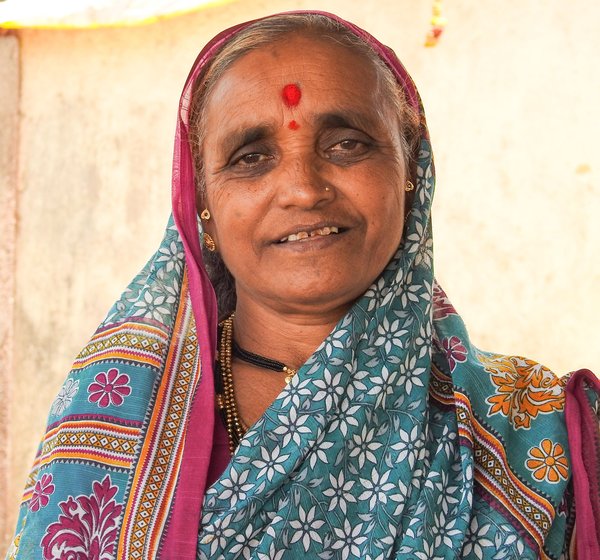