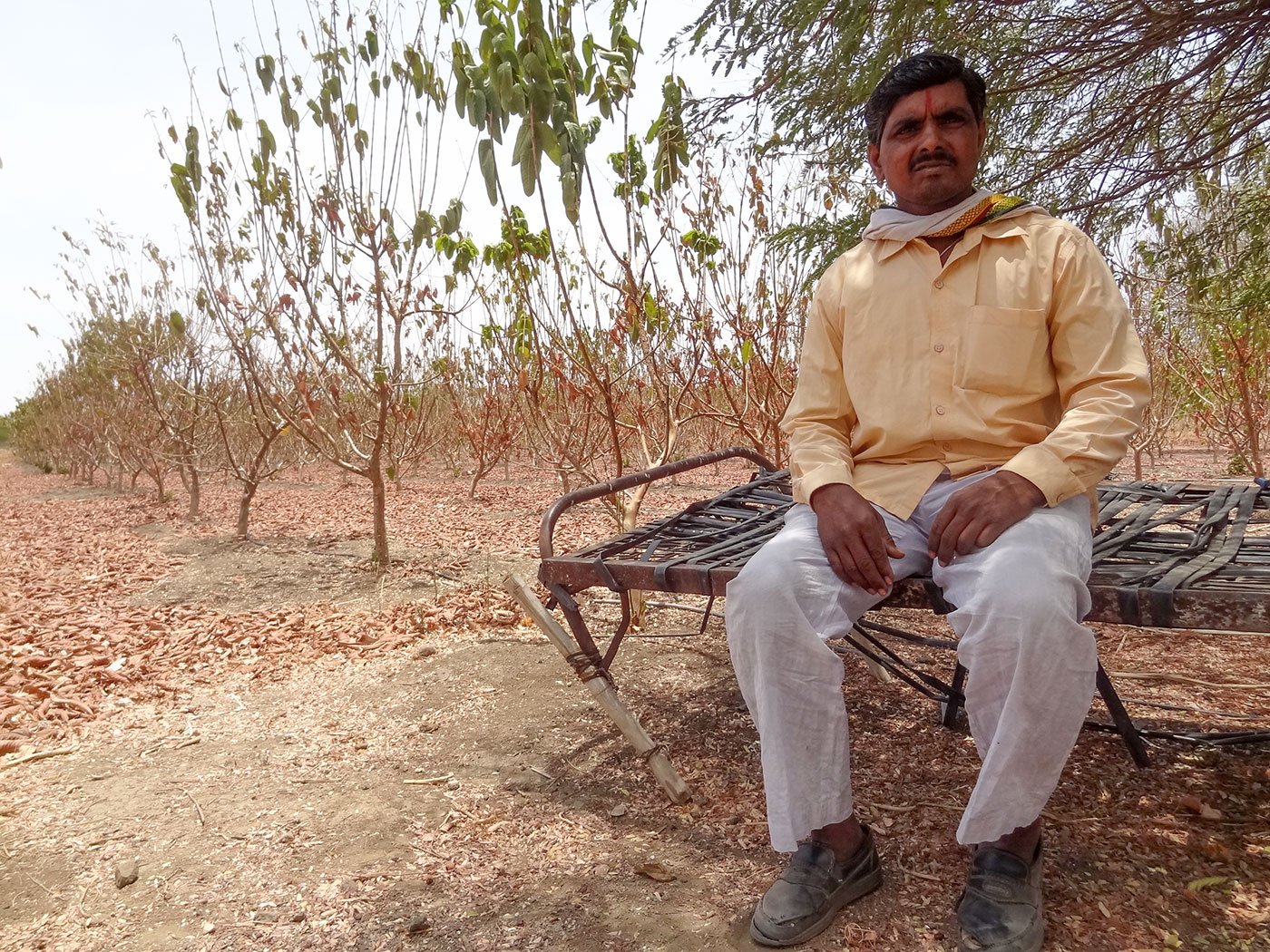 An escalating drought in Marathwada has left even relatively big farmers struggling to stay afloat, trying to buy water for crops and cattle, and giving up when the money runs out, as it has for many in Beed district

Prahlad Dhoke is trying to save his cows. But to do that, he’ll have to let his three-acre guava orchard die.

“It’s a trade off,” says the 44-year-old, in tears, standing before rows of 7 to 8-foot high guava plants. “I’ve expended everything, my savings, gold… But now I can’t buy more water every day to save my plants. I chose to save my cows. It’s a hard choice.”

Cows are hard to buy again once sold, and in early April a cattle camp came up just outside his village, Vadgaon Dhok in Beed district,  as part of the Maharashtra government’s drought relief measures. Prahlad’s 12 cows, including two Gir cows that he had bought from a local market for Rs. 1 lakh each, have been shifted to the camp. But giving up the plants means irreparable losses too.

“My eldest brother had gone to Lucknow four years ago,” he says, “he brought guava saplings from there.” It took Prahlad and his family four years to raise the orchard. But one really bad monsoon in 2018 after years of recurring drought and growing water scarcity in the arid Marathwada region, was a challenge he could not meet.

While some tehsils in the state witness drought and scarcity every year, a severe pan-regional water scarcity started in Marathwada in the 2012-13 agricultural season (a failed 2012 monsoon triggered scarcity in the summer of 2013), followed by 2014-15 and now 2018-19. While every summer brings water scarcity, since 2012,  Marathwada has reported a growing meteorological drought (failure of monsoon), agricultural drought (failure of kharif and rabi crops), and hydrological drought (groundwater depletion).

Vadgaon Dhok village is in Georai tehsil , one of the 151 tehsils declared drought-hit by the Maharashtra government in October 2018. Georai recorded less than 50 per cent rainfall from June to September 2018 –  just 288 mm against the long-term average of 628 mm in that period – according to data of the India Meteorological Department. In September, a crucial month for crops, the rainfall was a mere 14.2 mm against the average of 170 mm. 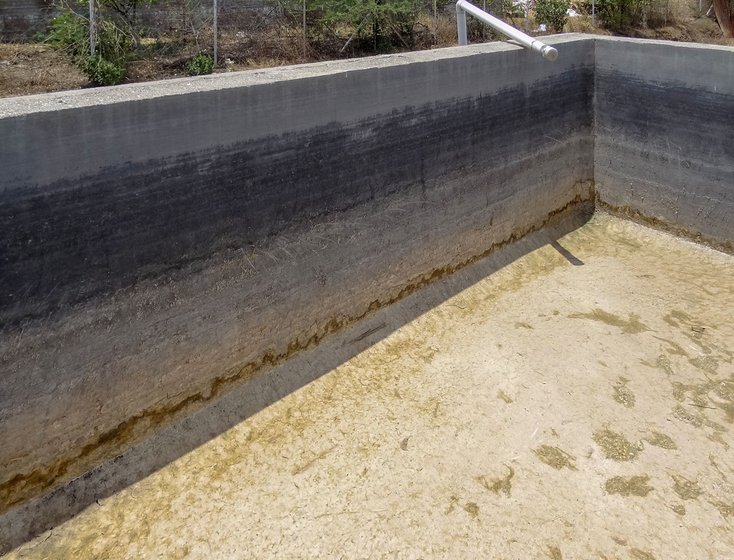 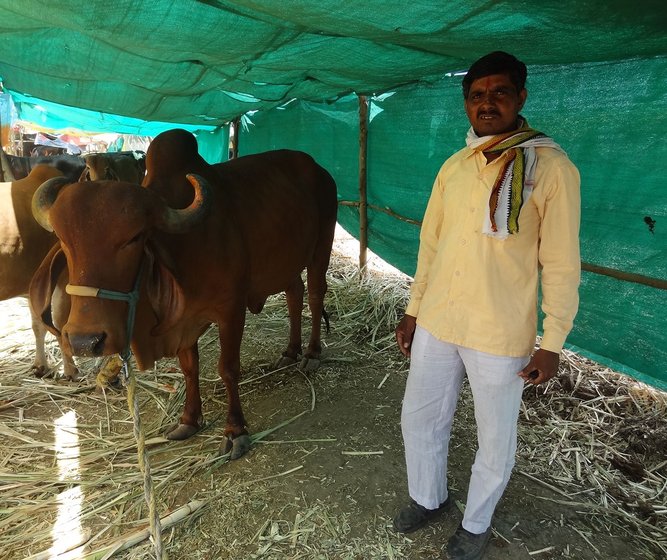 The water tank for cattle on Pahlad Dhoke's farm is completely dry (left); he has moved his 12 animals to a cattle camp in Georai tehsil (right)

The poor 2018 monsoon meant a poor kharif harvest in October-December, and no rabi harvest in February March this year. Though Dhoke had spent around Rs. 5 lakhs on a drip-water system and on deepening his four dug wells (using some of his savings, borrowing from a local agriculture cooperative and a private bank), nothing worked.

Prahlad, his two brothers and father together own 44 acres; 10 of these are in his name. The family’s entire land is dry and arid. On an acre, three years ago, Prahlad had planted mogra – the fragrant summer flower. “We made good returns from flowers,” he says, “but all those returns went into our farm.” And now the mogra too has now dried up.

In the last 15 years, as the water scarcity in the region has deepened, so have Dhoke’s efforts to counter it. He has tried different crops, diversified techniques, given up planting sugarcane, invested in irrigation systems. But, he says, every year, the aggravating water crisis keeps testing his capabilities. 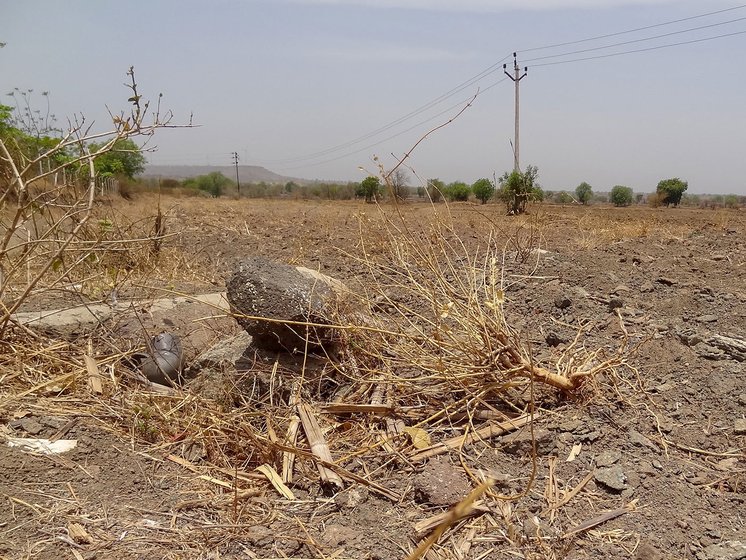 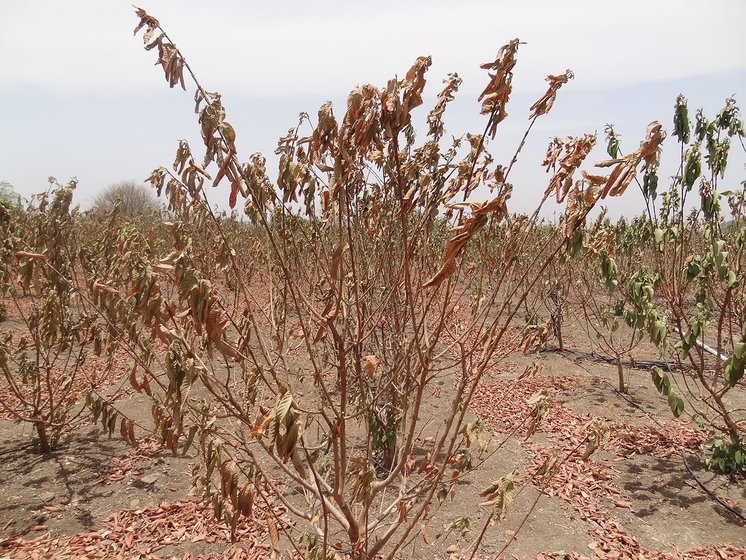 Dhoke's mogra plants (left) on an acre of his farm have dried up, as has his three-acres gauva orchard (right) that he raised for four years

Water tankers are a common sight here throughout the year, and more so in the summers. Marathwada is part of the Deccan region that rests on hard basalt rock. This means not enough rainwater percolates into the ground and groundwater aquifers don’t recharge enough. The region is also in the ‘rain-shadow’ zone, with rainfall that usually does not exceed 600 mm.

In Georai taluka though, intermittent sugarcane fields (some landowners have still-working wells, others keep buying tanker water) stand in contrast to vast stretches of barren land. Farms along the Godavari river in this region also have standing orchards of grape and other fruits, as well as green fodder crops. But further away from the river, on the upper plateau of the Deccan, the vast dry swathes don’t show any signs of green life.

“I bought water for about three months,” Prahlad says, “but I ran out of money.” He decided not to incur high-interest loans from private moneylenders (since he would not have got bank loans to buy water) to save his wilting guava orchard. “Rs. 800 for 5,000 litres! It’s simply not feasible. No one in our village has that kind of money,” he says. “I will end up in debt and like my plants I too won’t survive.” 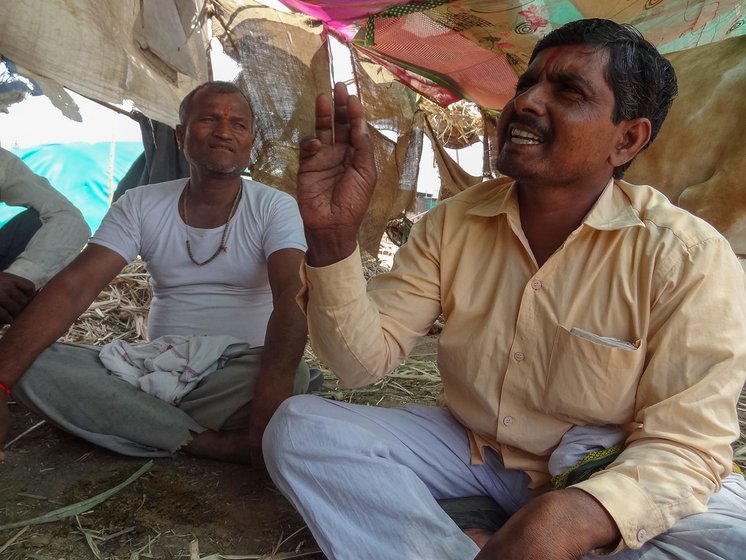 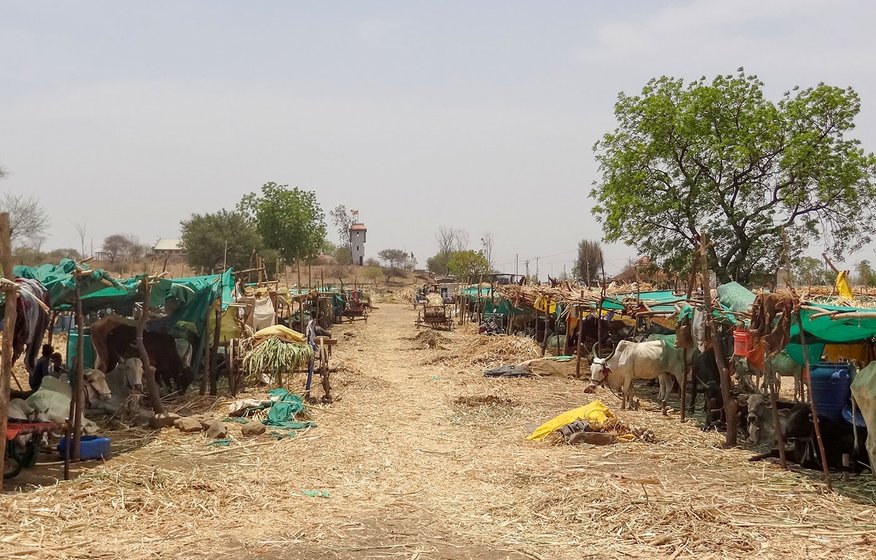 ' Sama-dukkhi ' (co-sufferers): Walmik Bargaje and Prahlad Dhoke of Vadgaon Dhok at a cattle camp (right) near their village

In April, after trying to save his guava orchard from drying up, Dhoke gave up. He is now waiting for the rains. But by the time it rains in June, his orchard will have wilted, unable to withstand the summer heat.

The 1,100 fully grown guava plants would have fetched Prahlad between Rs. 10 and Rs. 20 lakhs in the coming winter – guava plants yield fruits in the fourth or fifth year after sowing. After all expenses, he would have made a robust profit. Some plants bore small fruit, but the heat turned them as black as dry charcoal. “Look at these,” he says, walking through fallen dry leaves holding a branch with dried fruits, “they just did not sustain.”

Like Dhoke, many in Marathwada are battling a deepening water crisis  “Across Beed, and certainly in this tehsil , there was no kharif crop and no rabi too,” says 55-year-old Walmik Bargaje, a ‘ sama-dukkhi ’ (co-sufferer), as Dhoke puts it. Bargaje owns five acres and had planted coconut on half an acre. Those plants dried up. He gave up trying to cultivate sugarcane some time ago because of the water crisis. In June-July 2018, he had planted soyabean, which did not yield any returns, he says. And with no rabi sowing, he could not grow jowar and bajra , which he usually cultivates as fodder for his cattle.

In Beed district, as of June 3 this year, 933 cattle camps have been approved, of which only 603 are  functional, with 4,04,197 animals, according to the Aurangabad Divisional Commissionerate. Aurangabad division’s eight districts have a total of 750 operational cattle camps though 1,140 have been granted approval, the data show. Parbhani, Nanded and Latur districts don’t have a single cattle camp, either approved or operating.

Across Maharashtra over a million cattle heads are being given water and fodder in 1,540 cattle camps in 10 worst drought-affected districts, according to the information available at the state's Department of Revenue. 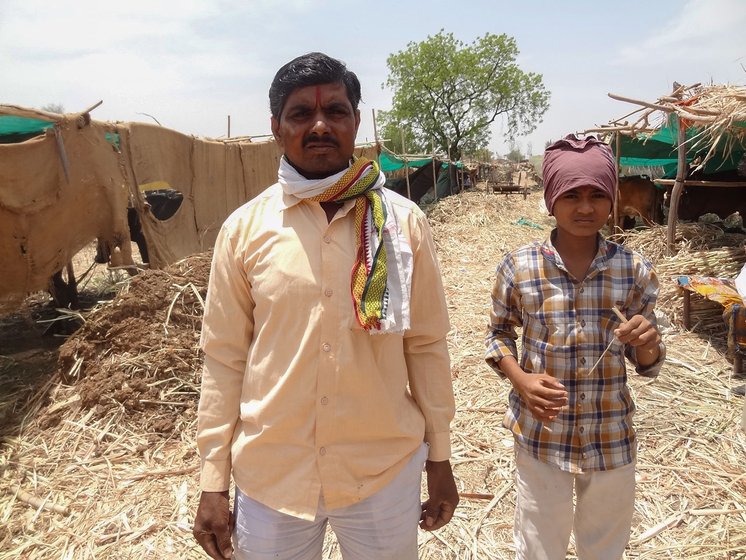 Prahlad with his youngest son Vijay, who school fees are pending because the family is struggling to juggle their finances

Dhoke blames the BJP-led government in Maharashtra for many things, but most of all because he says the state government discriminated between its supporters and critics. “Villagers who are close to the BJP got loan waivers and fresh loans,” he alleges, “I did not get it because I have been a supporter of the rival party. I see the same treatment in distribution of drought relief.”

Prahlad and his wife Deepika, a farmer and homemaker, have three children – Dnyaneshwari has completed Class 12, Narayan is in Class 10, while the youngest son, Vijay, has started Class 7. “ Tyanna shikavnar bagha me [I will educate them],” he says. But he has been unable to pay Vijay’s school fee (of around Rs. 20,000 for the 2018-19 academic session in a local private school) due to which his results have been stalled. “This past week one of my cows has been ailing,” he says. “I had to spend a lot of money on its treatment.”

The act of balancing the expenses is exhausting – keeping his livestock alive along with juggling his family’s needs. “These are hard times,” he says, “but I know these will pass.”

Meanwhile, across Marathwada, tanks, surface water storage, small and medium dams, dug wells and borewells are all slowly drying up. As the summer peaks, for thousands, it’s a daily desperation for water in this belt. Many Marathwada families have migrated to Aurangabad, Pune or Mumbai, or are preparing to leave. Fishing communities are reeling, as are pastoralists with livestock.

Prahlad says he has not slept in days. He hasn’t visited his orchard, around a kilometre from his house, in days too, and flits between the cattle camp and his home across the highway. “I work for 16 hours a day,” he says, walking through his forlorn farm. But what do you do, he wonders, when you just run out of money and water.