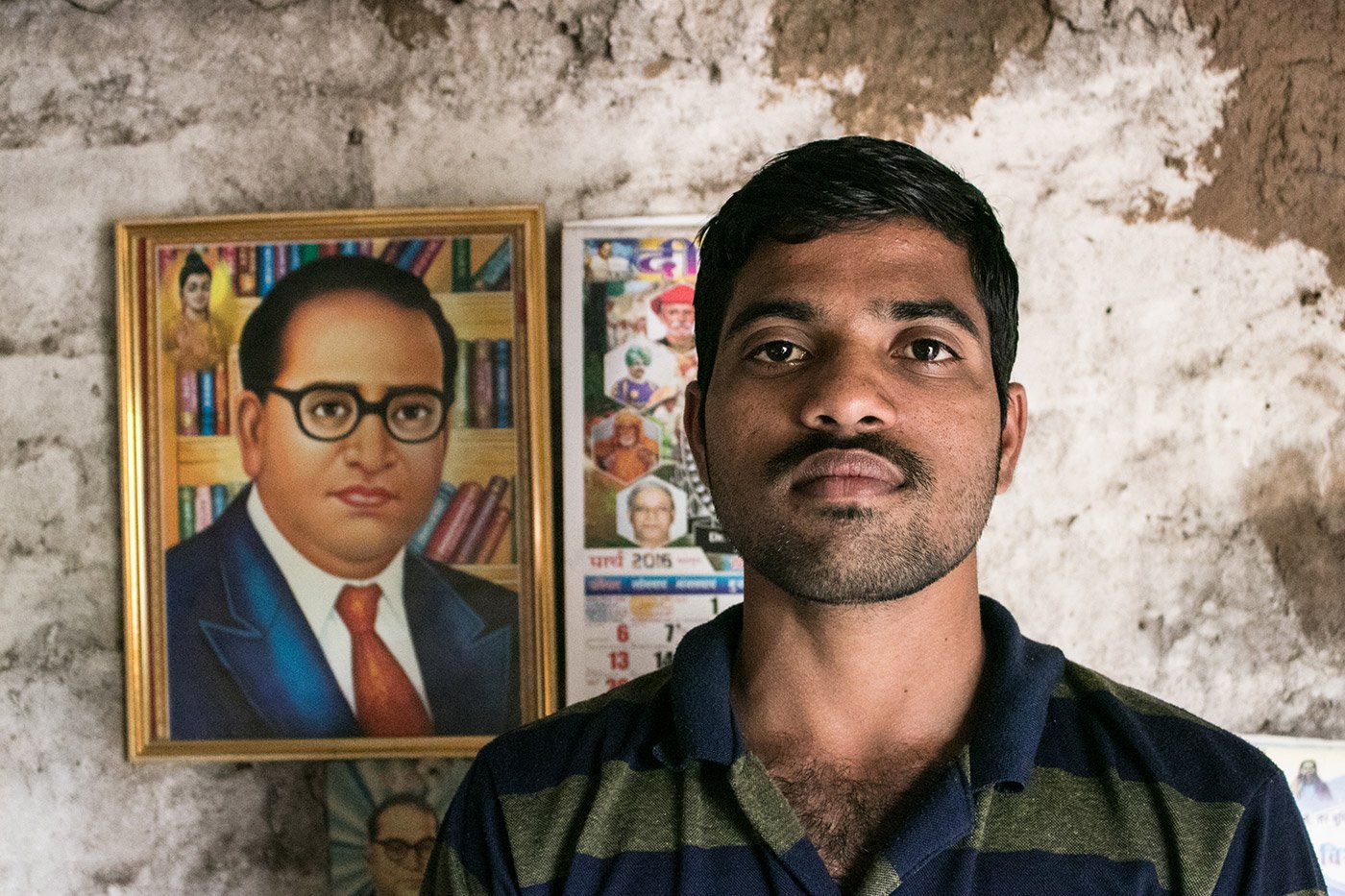 ‘ My words,
My sorrows,
And the poetry that springs from their confluence
Is my only introduction’

That is how Suyash Kamble describes himself in the introduction to a collection of his poems that he is putting together.  At the age of 20, he has already written 400 of them, their powerful words speaking of his anger and anguish, his beliefs and hopes.

Suyash calls his poems "revolutionary" and caste-based discrimination and violence are a central theme in his writing. “Being born in a Dalit [Mahar] household showed me the casteist roots of society, which remain even after 71 years of Independence,” he says. “The status of a person in society is decided by caste."

Many of his poems are also a reaction to the growing attacks on personal freedoms and the freedom of expression, and of the opposition to Dalit intellectual assertion. Other poems too cover a broad range – atrocities against women, the stampede at Elphinstone station in Mumbai in September 2017, the killing of rationalists Narendra Dabholkar and Govind Pansare.

His father, Shamrao Kamble, 57, is a farmer. The family lives in Shiradwad village in Shirol taluka of Kolhapur district in Maharashtra. On their 1.75 acres of land they manage to produce 55-60 tonnes sugarcane over a 15-month cycle, at times taking loans to meet costs, and making modest profits on the produce. Shamrao also works as a labourer in the small powerloom factories in and around the village, earning Rs. 250 for an eight-hour shift. 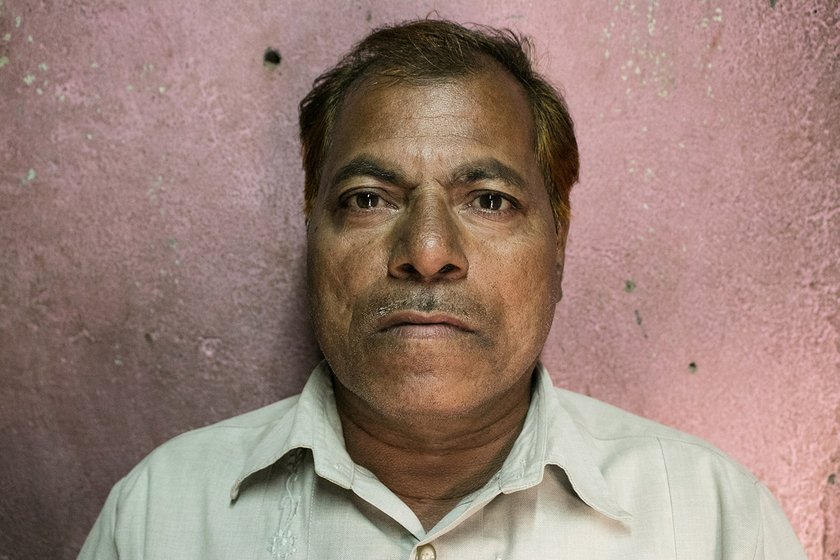 Suyash’s father, Shamrao Kamble, introduced his son to the works of Dalit writers and Dalit movements across the country

Suyash’s mother, Shakuntala, 55, is a homemaker; his brother  Budhbhushan, 24, is studying law in a college in Mumbai, and another brother, Shubham, 22, works as a labourer at construction sites in Ichalkaranji town.

Suyash studies in Class 12 in a night college in Ichalkaranji, which is 12 kilometres from his village. To add to the family income he works as an electrician during the day. This fetches him around Rs. 2,500 per month. “The job of an electrician involves visiting many houses,” he says. “The first thing people ask me is my name, and the question which follows is: what is your surname? At times they then ask me if I am a Dalit.”

Once, Suyash says, he went to the house of an upper caste family in Shiradwad to repair some fittings in the in-house temple. “Immediately after inquiring about my caste, they covered the statutes of the deities with a cloth,” he says.  At another job, he recalls,  “I was asked to remove my rubber slippers [which he wears to protect himself from any electrical shocks] even while working on the terrace. When I refused, the woman there said, ‘Aren’t you taught anything at home? You Dalit people have always behaved this way’. ”

And, he recalls, “Usually, while other upper caste workers are served food or water in metal utensils, I always end up receiving food in disposable plates. These are small things which I see every day. We have experienced many such instances of caste discrimination. We have now become used to this.”

It was Suyash’s father Shamrao who first introduced his son to the writings of Namdeo Dhasal, the revolutionary poet and a founder of the Dalit Panthers in 1972. Over time, Suyash read extensively and was influenced by the work of many other poets, including Daya Pawar, Sharankumar Limbale, Narayan Surve, Laxman Mane, Eknath Awad and Ashok Pawar.  His father would narrate stories of the movements across the country led by Dalit leaders, and Suyash also started reading the works of Dr. Babasaheb Ambedkar. The young poet is now a member of five libraries; two in his own village, one in nearby Shivanakwadi village, and two in Ichalkaranji town.

Suyash started writing poems at the age of 16. He writes them by hand in Marathi, and has filled six 180-page diaries. “Whenever something disturbing happens, I write a poem. I can express myself best through poetry. My poetry is about the social realities I observe, of how the lower castes are impoverished. Until I write poems and express these issues, I don’t feel calm within.” 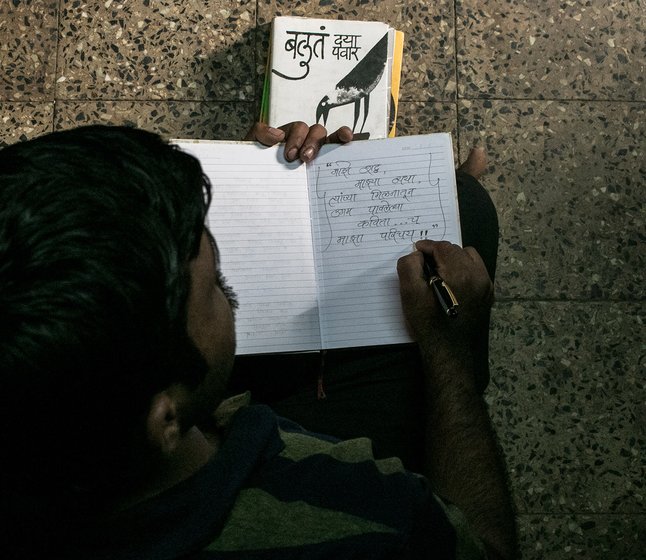 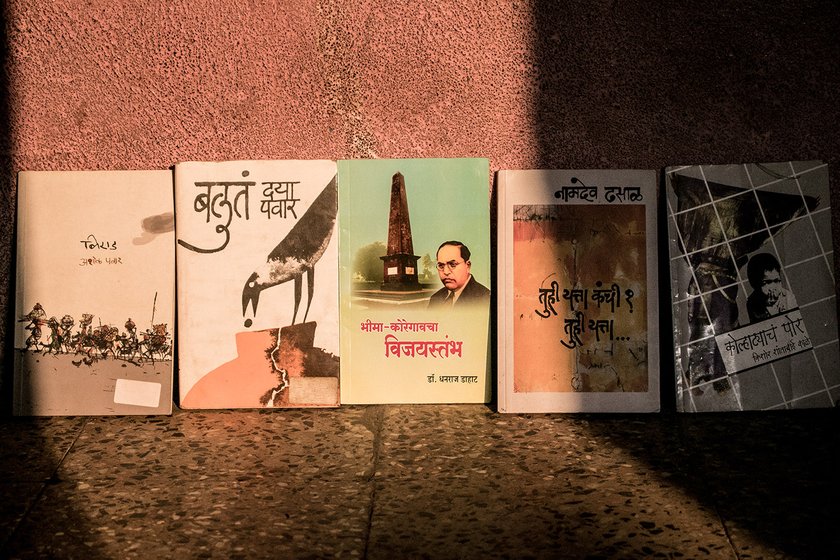 Suyash has filled several diaries with poems that speak of caste and caste issues; he is a member of five libraries, and has a wide collection of Dalit literature

Suyash’s early poems were not “revolutionary” he says,  “but after reading Babasaheb's Annihilation of Caste , my tone changed.” Ambedkar's Riddles in Hinduism further inspired Suyash. “Now, my poems are about the atrocities faced by Dalits. People talk about ending the reservation system, why does no one talk about ending the caste system?” he asks. “Who says untouchability doesn’t prevail in today’s India? We experience it every day. I am restless after seeing casteism on a daily basis. And when this restlessness becomes too much, I write poetry.”

On January 1, 2018, Suyash was at Koregaon Bhima, in Shirur taluka of Pune district, around 290 kilometres from his village. On that day every year, Dalit groups gather here in large numbers to commemorate the defeat of the upper caste Peshwa-led Maratha army by Mahar soldiers in the British army. “I’m involved in the [Dalit] movement, and Koregaon Bhima is an annual inspiration for us to do some good work for our community,” he says.

This year, an opposing political group waylaid the Dalits going to Koregaon Bhima; violent clashes followed. Suyash expressed his outrage in a powerful poem titled ‘ O country of stones ’. ( See below for the Marathi original and English translation. )

Suyash aims to publish a book of his poems and he wants to become a journalist. “We need Dalit reporters to write about our community. This suffering can best be understood only by a Dalit and he can write well about it,” he says. “The fourth pillar of democracy has been captured by the government today. The media have become puppets of the politicians. But a good journalist will never be silent.”

O country of stones … as always, yesterday too we had to eat stone!

Those with heads full of stones
attacked us innocents…
This poisonous vine of caste
Where is it planted, I ask…
How is the earth blessed
with these innate thorny elements!
When the assembly that moved ahead
with only truth in their eyes;
Was suddenly dispersed,
When the enemy’s sense of tolerance is struck by famine and it loses all rational thought…
What arises then….
Is the suspicion of anti-nationalism on every innocent being!
Unintentionally then, even I begin to talk… of rebutting darkness with light!
The reaction to evil actions!
And the situation that transpires
from the conflict between these
Is, by most people, called a riot…
People mainly define it this way!
But our personal experience is much more frightening than this!
When humans burn other humans…
Or at times, they burn vehicles, on spotting the Ashok Chakra emblems on them….
O country of stones!
But why am I telling you all of this?
In this country of stones… how can I ascertain, that you haven’t turned to stone as well?
In this country of stones… the human hearts too have turned to stone, I say…
Throwing stones at women and girls,
Beating them up inhumanly,
Watching the blood flowing from their wounds…
It seemed to me like Angulimal* running, weapon- in-hand, to attack the serene Buddha, who sat with eyes closed…..
And sometimes…
‘Will you utter “Jai Bhim” Pochya?’ that rang the axe blows on Pochiram’s** limbs!
The memory of that blood curdling incident…
Lit up, fuelled by blood, the ‘Chandar’ in me  ]
I too grabbed a stone then and directed it at orthodoxy…
At the casteism that denies humanity to human beings!
Spilling out their thunderous, miserable, vengefulness on to the public square
I too stepped onto the street, to explode the grand conspiracy of
the guardians of Manusmriti!
Stones from all directions… touched my body and flew on… and they were asking,
‘Tell us, will you say it again?’
‘India is my country…
All Indians are my brothers and sisters…’
… O country of stones… you and only you,
Compelled me to grab a stone!
Compelled me to grab a stone!

Notes: * Angulimal refers to Ahimsaka, who was misled by his teacher into serial violence; he had to kill a 1,000 people and keep count by cutting off a finger as guru dakshina . He wore a garland of these fingers – an ‘anguli mal’.

**Pochiram Kamble and his son Chandra died in the violence during the Dalits' struggle for the renaming Aurangabad University as Babasaheb Ambedkar University .