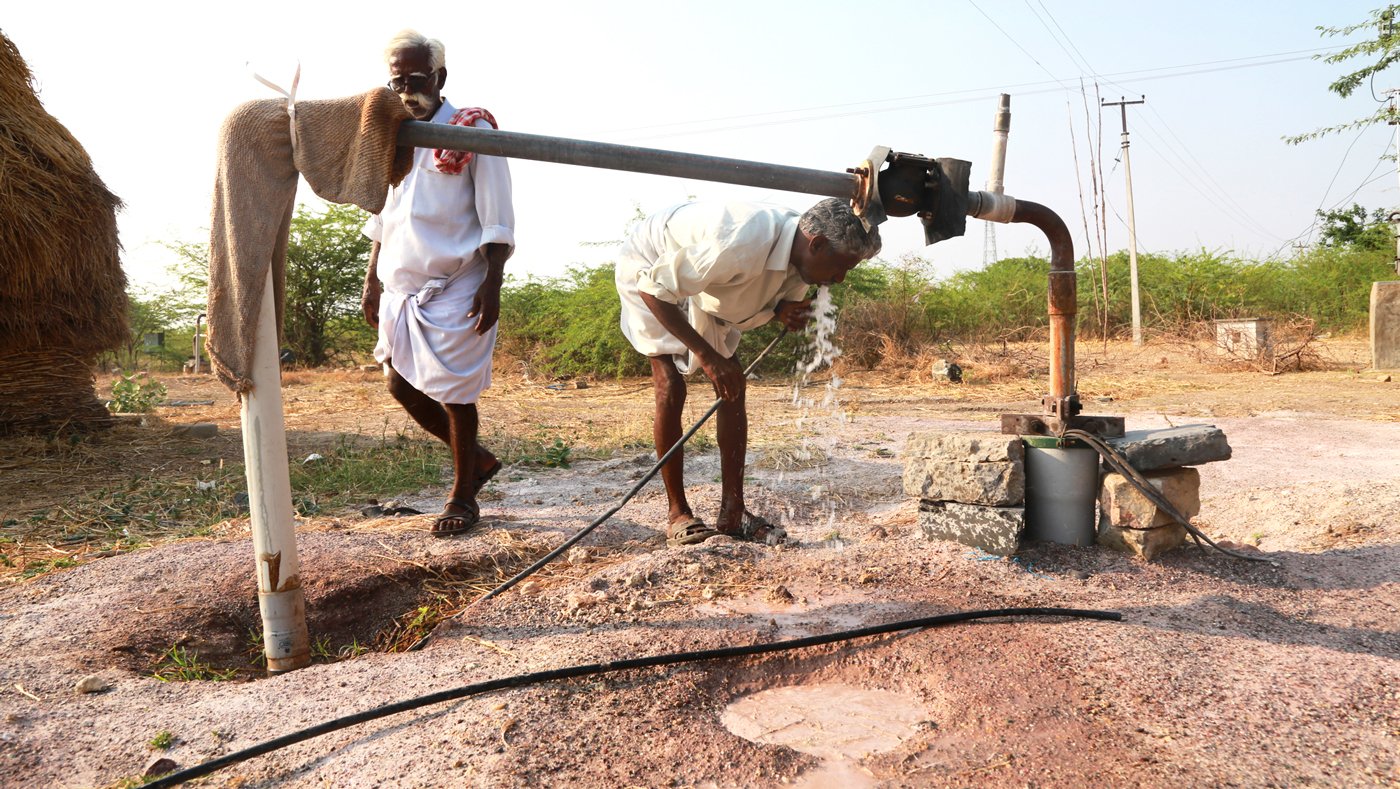 A steady decrease in rainfall, the switch to water-intensive cash crops and ever-increasing borewells have lowered the water table in Nagarur village of Anantapur, leaving farmers struggling to keep their crops alive

The farmers of Nagarur in Anantapur district long for their past, a time of abundant groundwater in their village. They sometimes talk about the period before 2007 in the present tense, perhaps not able to let go of those days of relative prosperity.

By around 2007, though the rains had become scarce, the lakes near Nagarur overflowed one last time. "During the time of N.T. Rama Rao [as chief minister of Andhra Pradesh], the rains were regular. When Y.S. Rajasekhara Reddy came [to power in May 2004], water from the lakes overflowed for a week [because of heavy rainfall]. And that was the end," says V. Ramakrishna Naidu, 42, a farmer. 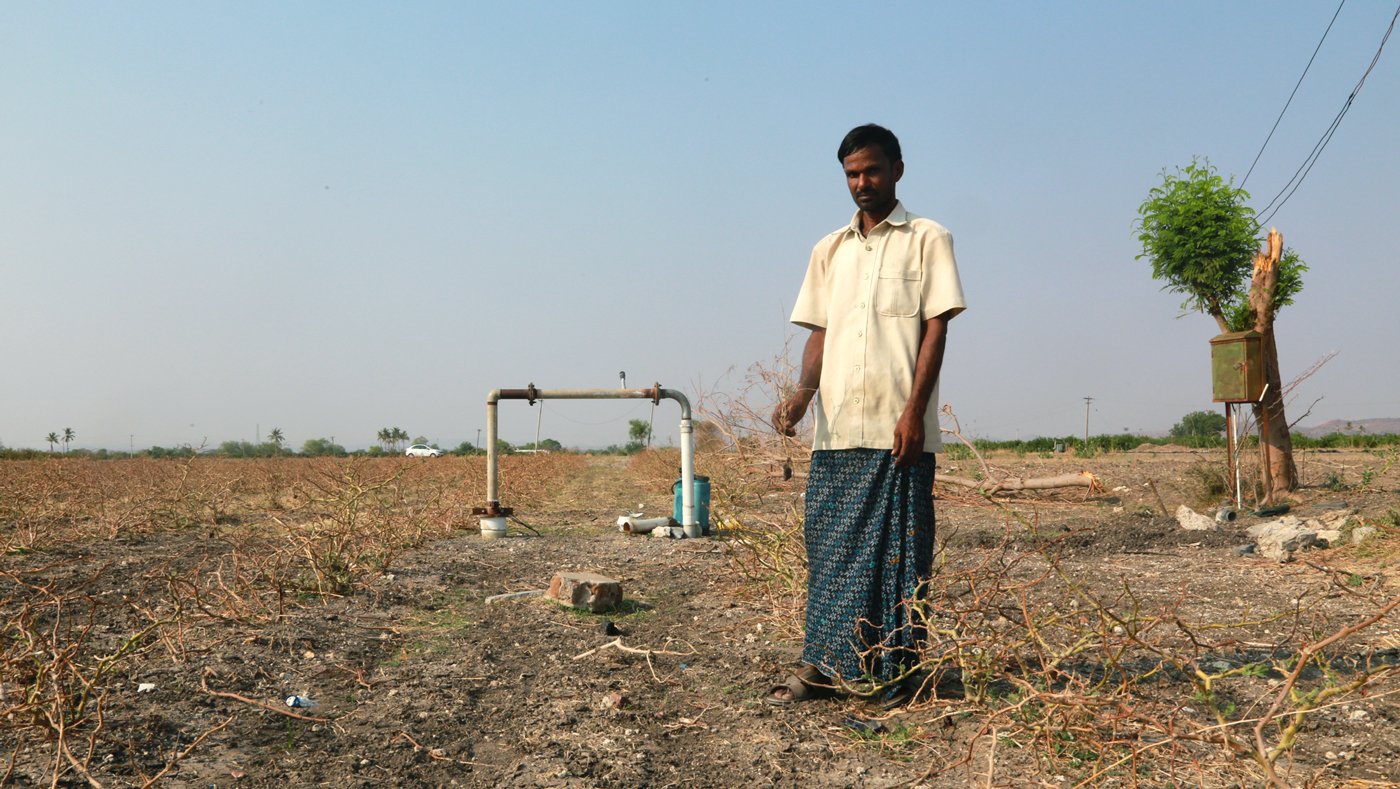 'During the time of N.T. Rama Rao, the rains were regular,' recalls V. Ramakrishna Naidu of a period  before a constant drought settled in his village

Although years of low rain were usually followed by a year of good rainfall, which helped fill the wells and recharge groundwater, this slowly changed. Before 2011, in some years the annual rainfall in Nagarur (recorded by the Ground Water & Water Audit Department, Anantapur) was over 700-800 mm. But after June 2011, the highest recorded rainfall in the village has been 607 mm (June 2015-May 2016) and between just 400 to 530 mm in other years.

However, the slow drying out of the waters of the 750-odd villages of Anantapur district had begun even earlier, by the 1990s. In that decade, farmers in Nagarur, a village with a population of around 2300, had started cultivating cash crops like groundnut and oranges, instead of their traditional crops like millets and lemons. “That was the trend then, people were cultivating these crops because they were more profitable,” says Sunil Babu, a farmer. 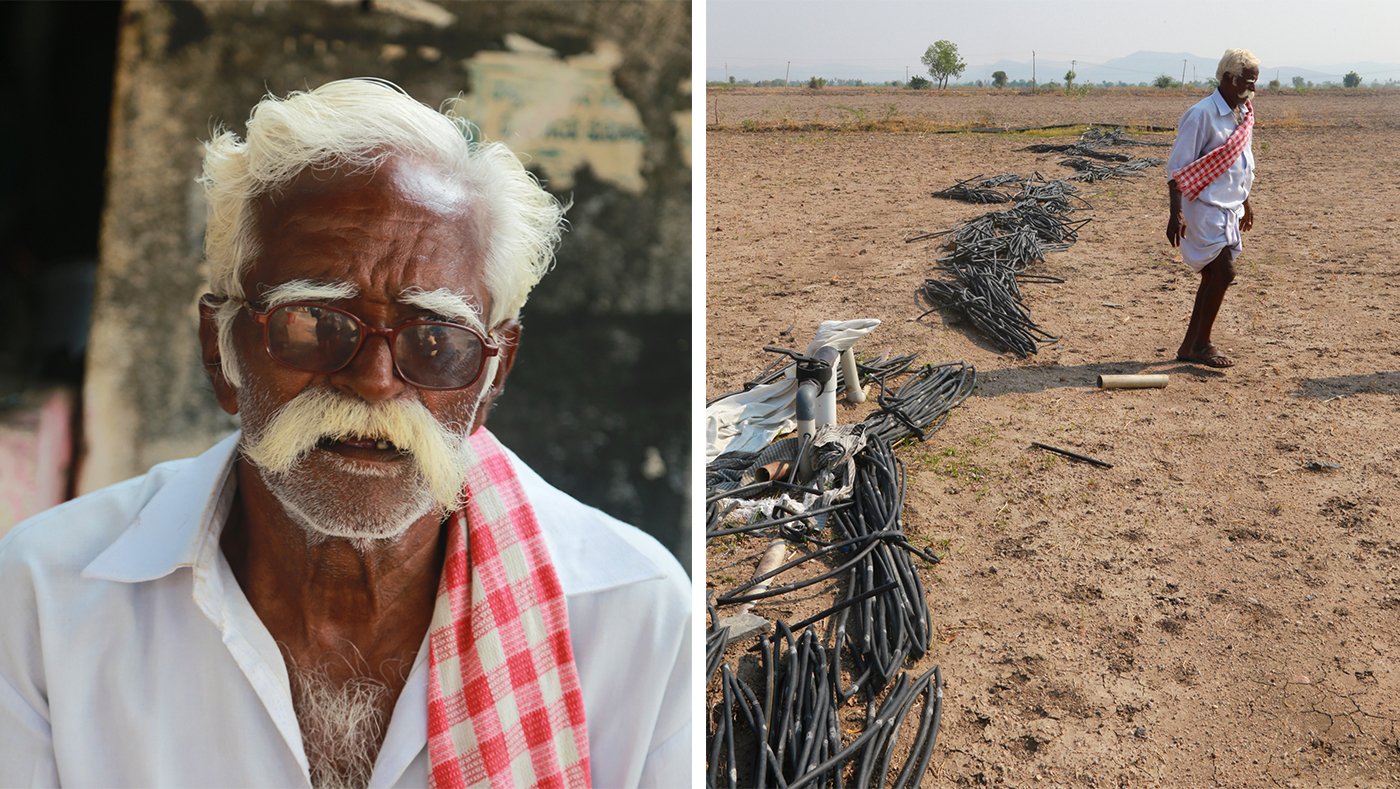 K. Sreenivasulu and his family have spent over Rs. 10 lakhs on sinking borewells, including Rs. 2 lakhs on drip-pipes (right) to irrigate their land

The shift to water-intensive cash-crops, along with decreasing rainfall, meant drilling more borewells and drawing on ever-deeper sources of groundwater. "Forty years ago, there were no holes [borewells]. There were only wells dug [manually by us]. We had to dig just 10 feet into the ground and there would be water," remembers Sunil Babu’s father K. Sreenivasulu, a farmer in his 70s.

But with a steep decline in the water table – the lowest since the district’s Groundwater & Water Audit Department started keeping records in 1972 – and with less recharge every year, borewells now go to a depth of 600-700 feet. And some farmers in Nagarur say they have drilled to over 1,000 feet and still found no water.

In turn, the rapid increase in borewell irrigation has further depleted groundwater levels as well as dried up open wells in the district, according to a 2009 study by the MS Swaminathan Research Foundation “… Only 12 out of 63 mandals in Anantapur district are in the ‘safe’ category with regard to groundwater utilization,” the report states.

A graph of the depth at which groundwater can be found in Nagarur – from  around 10 metres in 2001-02, to over 25 metres in 2017. There were some other years of dipping depth, but the average is dropping (Source: Groundwater & Water Audit Department, Anantapur). Right: K. Sreenivasulu shows the opening to a failed borewell on his farm

Sreenivasulu has dug eight borewells on his nine acres of land, spending at least Rs. 1 lakh on each. He and his three sons have taken loans of around Rs. 5 lakhs from private moneylenders. Only one of their borewells is functional now. It is about two kilometres from their farm and the family spent an additional Rs. 2 lakhs on drip-pipes to transport the water to their field. "It’s our desire to save the crops that are about to reach our mouths, from dying," says Sreenivasulu.

With many farmers like Sreenivasulu desperately trying their luck by digging multiple wells, by 2013 there were around 2 lakh borewells in the district – a number estimated by Dr. Y. V. Malla Reddy in his book Ananta Prasthanam ; Reddy works as a director of the Accion Fraterna Ecology Centre in Anantapur. “But we know that of these, around 80,000 borewells have dried up in the summer of 2013,” he writes.

The total number of borewells has gone up to around 2.5 lakhs in 2017,  Reddy told this reporter, and, he said, “The [groundwater] officials recently told me that only 20 per cent borewells are functioning and 80 per cent aren’t working.” 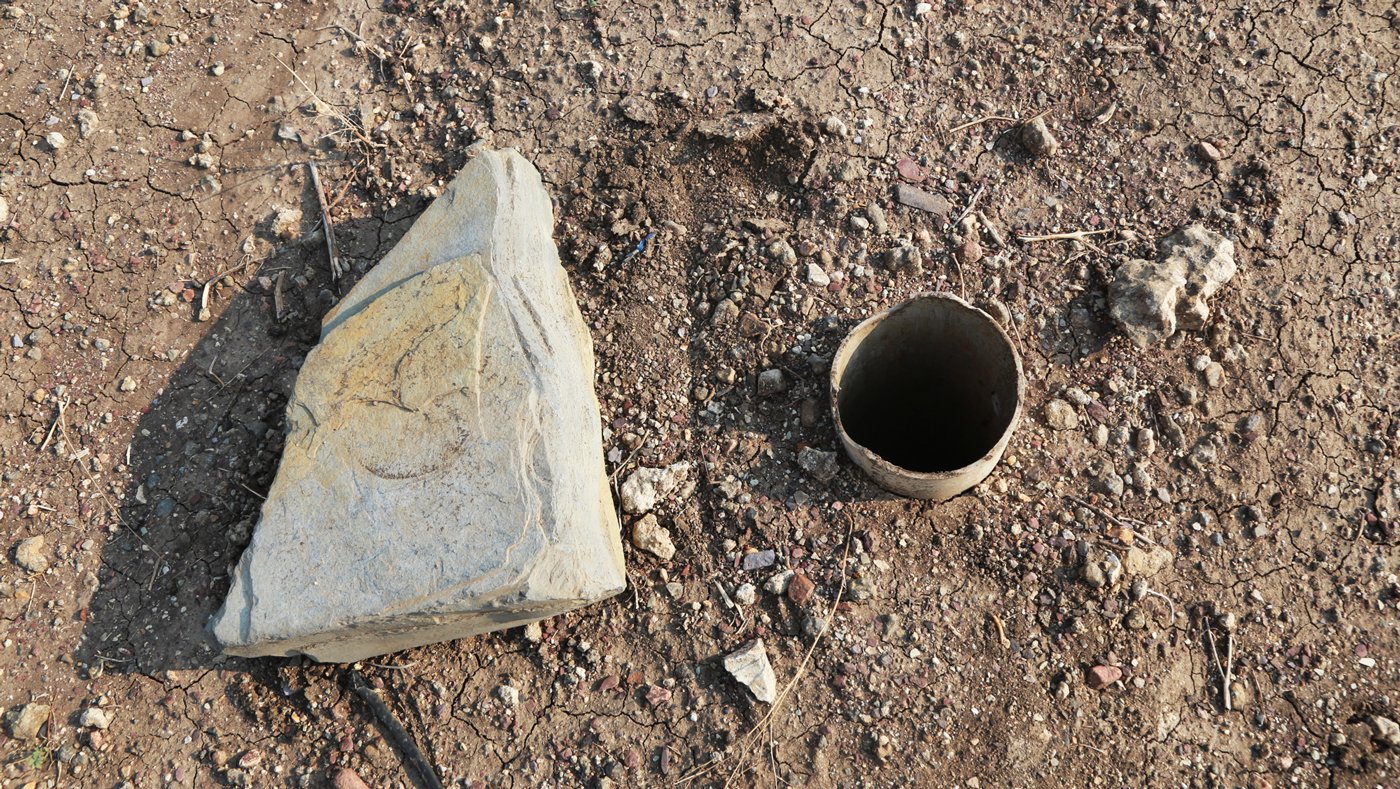 That 80 per cent includes two wells on Ramakrishna Naidu’s land – of the three he sank after the year 2000 on his 5.5 acre field, only one is now functional.  "I started taking loans from around 2010-11. Before that there were trees and a lot of water. There were no debts," says Naidu. He now has a debt of around Rs. 2.70 lakhs from private moneylenders and is able to only pay the 2 per cent interest every month with his income from agriculture. "I can't fall asleep at night. I keep thinking about the moneylenders. Who might come to ask me for the money tomorrow? Who might shame me in the village?"

Despite the loans, the multiple borewells, and the constant worry about water and debt, if a farmer still manages to get a good crop, that too has often not guaranteed a profit in Anantapur because of fluctuating agrarian markets. Using water from his borewell, in April this year Naidu had a good yield of a cucumber used in making sambar . He hoped to make a modest profit. "Ten days before I cut my crop, the rate fell from 14-15 rupees per kilo to 1 rupee a kilo,” he says. “I couldn't even make the money I spent on buying the seeds. I fed the crop to goats." 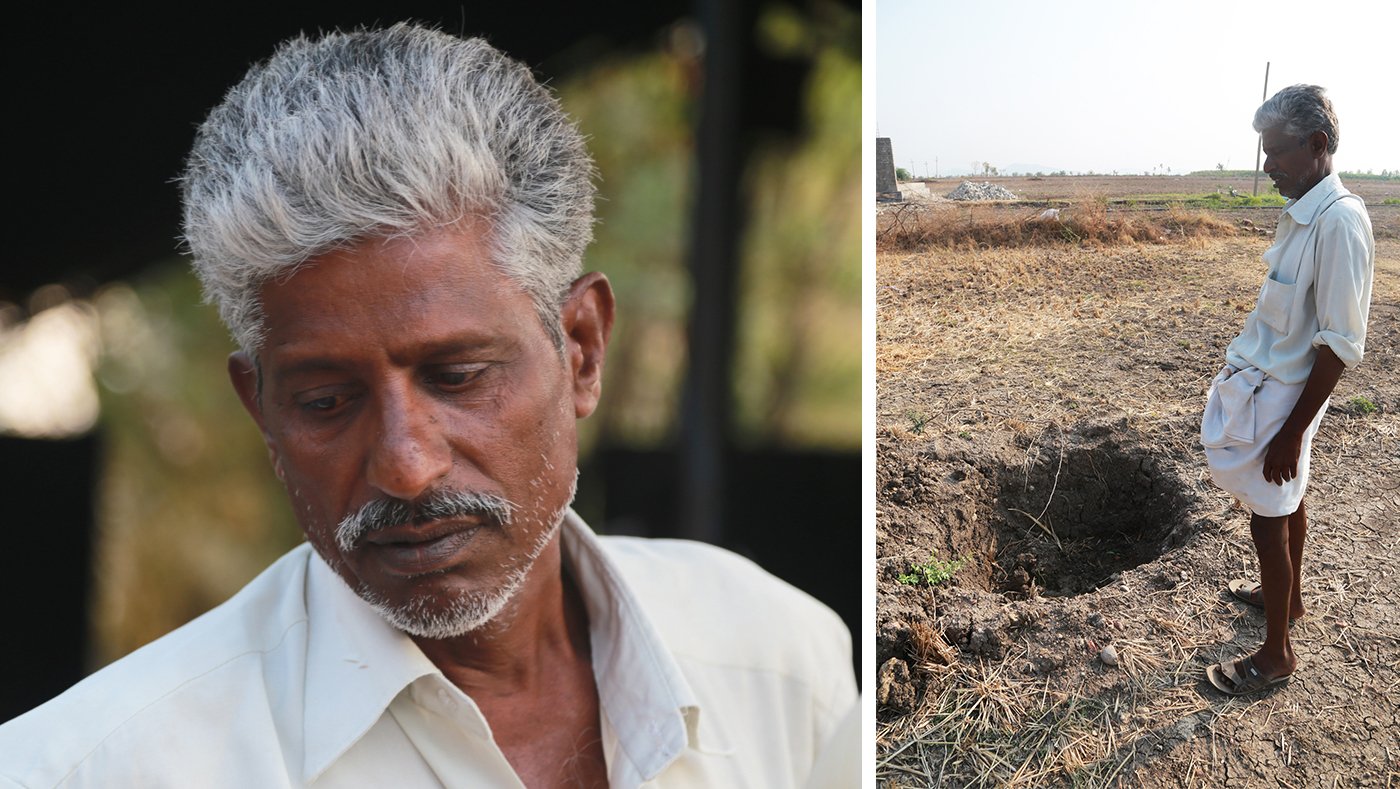 G. Sreeramulu stands next to one of six failed borewells on his six acres of farmland

"Tomatoes had no rate too." says G. Sreeramulu, who incurred losses despite a successful borewell-watered tomato crop in December 2016. Sreeramulu has six failed borewells on his six acres of land. He discusses his borewells over tea at the Shree Sai Tiffin Hotel,  right outside the village. Around 7:30 a.m., the place is usually buzzing with customers, almost all farmers who are spending less time on their fields with their crops failing, or are on their way to construction sites or MNREGA workplaces for daily wage work. The eatery was started by K. Nagaraju, a potter, in 2003. "Initially we had business of about 200-300 rupees every day. Now it is about 1,000 rupees per day," he says.

The farmers discuss various subjects from national politics to their luck with borewells and their debts. "At one time, the party belonged to the village political heads. Now we party with Gangamma [water]," a customer at the eatery says sarcastically. That is, the farmers would spend money to avoid arrests after faction-fights in their villages, but now most of their money is spent on water. 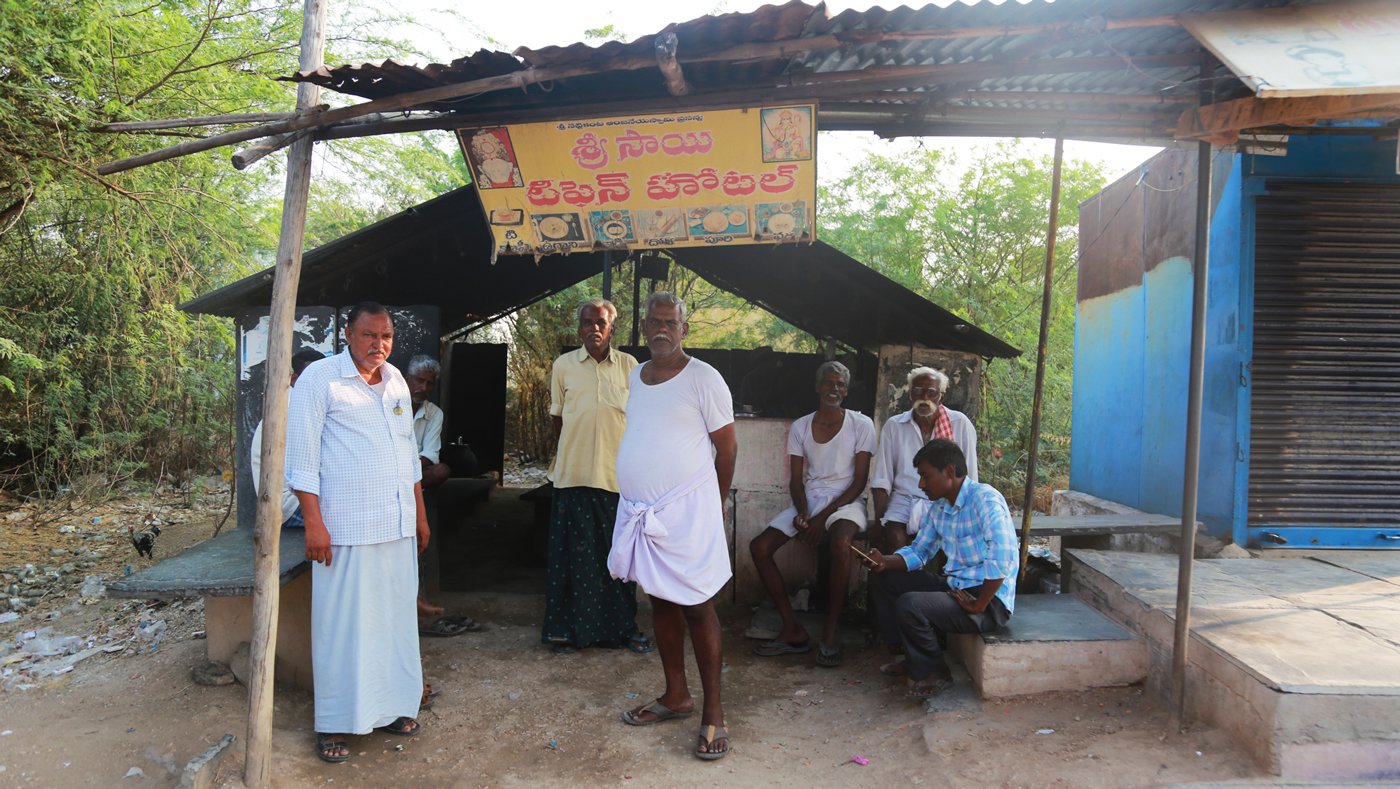 At the Shree Sai Tiffin Hotel outside Nagarur,  most of the customers are farmers who, because of failing crops, are on their way to daily wage worksites

And with that water receding every year, farming has become such an undesirable occupation here, many tell us, that no one in Nagarur now wants their daughters to marry into a farm household. "I wanted to marry a girl from our village," says Naidu. "Her parents said they would agree if I got a job in a private company in Hyderabad or somewhere. They didn't want their daughter to marry a farmer."

Naidu wanted to be a lawyer. "That would have been a good life. I could have helped bring justice to people," he says. But he was forced to discontinue his bachelor’s degree and take up farming due to family disputes. He is now 42, unmarried, and carries within him many unfulfilled dreams.