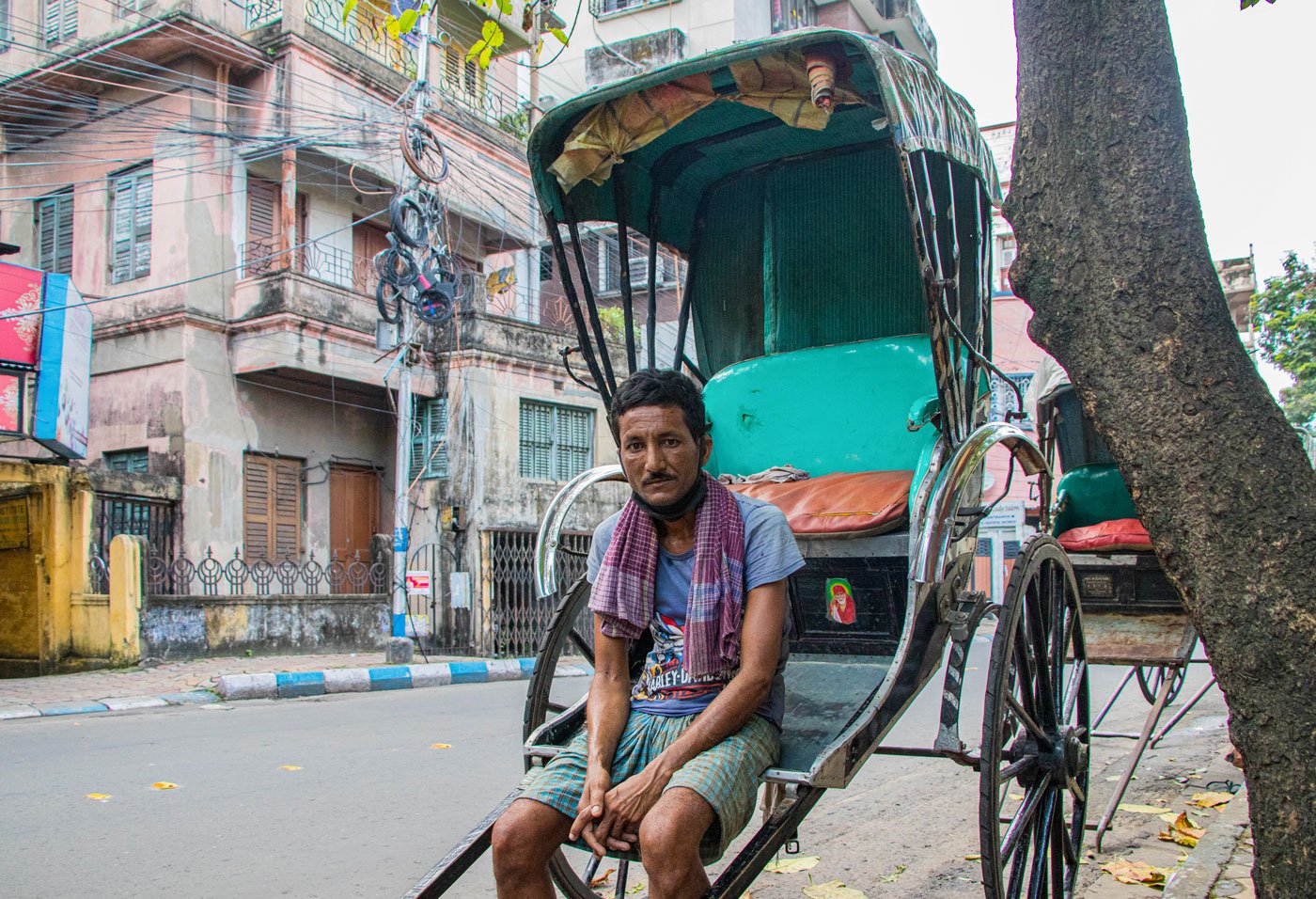 Lallan Paswan: trying to pull on in Kolkata

Despite the government's attempts to restrict hand-pulled rickshaws, lockdown losses, and bare earnings, Lallan Paswan continues to do this arduous work to support his family in Bihar’s East Champaran district

When Lallan Paswan first tried to learn how to manoeuvre a hand-pulled rickshaw, other rickshaw pullers sat in the back like passengers to help him practice. “When I lifted the [front end of the] rickshaw for the first time and tried to take it forward, I couldn’t do it,” he says. “It took me two to three days.”

Wiping sweat from his face with the chequered gamcha slung around his neck, he explains how he then also learnt to balance the rickshaw, making sure it never topples over. “If you hold the handles [at the front] as far away as possible from the passengers, the rickshaw will not overturn,” he says. It took him some time to not feel nervous about a toppling, but now, he adds, “I have become fearless. I can easily pull the rickshaw with two passengers, even three, if the third one is a child.”

It’s been roughly 15 years since those early attempts. When he took those first lessons, Lallan had just come to the city from Raghu Nathpur village in East Champaran district of Bihar. He had studied till Class 9, and worked for a while on the family’s one bigha of land (less than an acre), cultivating wheat and paddy. But farming didn’t bring enough returns, and Paswan came to Kolkata looking for work.

For some months, he tried to find a job in an office. “When I did not get any work, some rickshaw pullers from my village introduced me to this line of work,” he says.

Paswan, who is around 40, now operates from a rickshaw stand at the intersection of Cornfield Road and Ekdalia Road in South Kolkata, where around 30 pullers wait with their rickshaws. Many of them returned to their villages during the nationwide Covid-19 lockdown that began in March, Paswan says. “Work was not going well because of corona. What will they do here? So they went home.”

Lallan though stayed on in Kolkata because he had borrowed Rs. 1 lakh from a mahajan in his village to build a pucca house. If he went back, the moneylender would have demanded Paswan pay up – which he is just not in a position to manage. 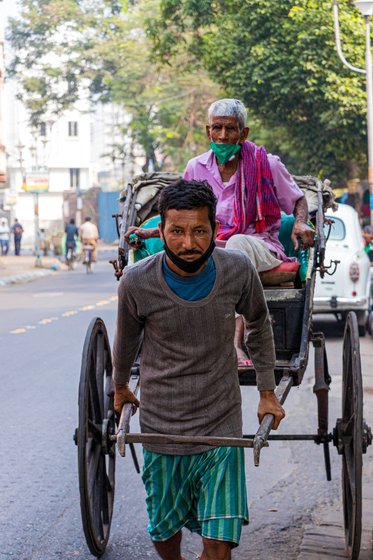 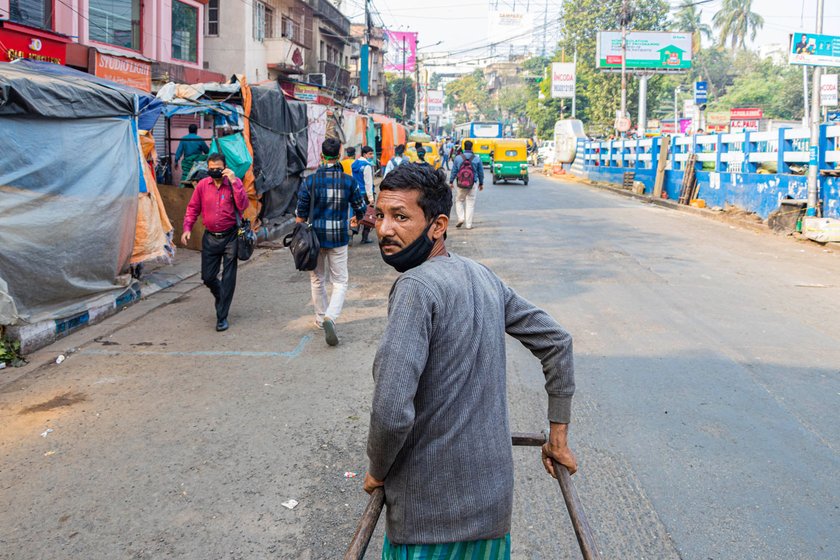 'I can easily pull the rickshaw with two passengers, even three, if the third is a child,' says Lallan, who came to Kolkata from Bihar 15 years ago

Before the pandemic, Lallan would start work at 6 a.m. and stop by 10 p.m. He made anywhere between Rs. 200 and Rs. 300 a day, ferrying passeng­ers to nearby localities like Golpark, Gariahat and Ballygunge – all roughly within 5 kilometres from the rickshaw stand.

It takes Paswan around 15 minutes to cover a kilometre – pulling along at least 150 kilos – the combined (estimated) weight of the rickshaw and its occupants. “If I have to take a passenger further from my usual route, my legs and shoulders start to ache by the end of the journey,” he says. “I become very tired.”

Depending on the distance and the number of passengers, before the lockdown, he charged Rs. 30 to Rs. 50 per trip. “Some months I made Rs. 8,000. Other months, it was Rs. 10,000,” he says. From these earnings, he would give the rickshaw owner a weekly rent of Rs. 200, keep aside Rs. 2,000 for his meals and other expenses, and send the rest of the money home to his family.

During the lockdown, he counted on his savings or the rare fare he earned, and received some rations from the local councillor and non-profit organisations – these stopped being distributed once the unlock phases began.

Before the lockdown, Paswan would take out his rickshaw even if it rained. He would just cover himself with a plastic sheet. Nowadays, he says this has become risky. “I stay in my rickshaw when it rains. I do not take any passengers. If I get a fever from getting wet, people will say that I have corona. Earlier, I used to get fevers frequently. But the situation was different then. If I go to get treatment for a fever now, I will be asked to get a corona test. So, we [rickshaw pullers] are afraid of getting wet.”

Paswan remembers the day that Cyclone Amphan hit Kolkata, on May 20. “That storm was very big,” he says. He left from the rickshaw stand to go to his room at 3 p.m., earlier than usual. “From inside [the room], I could hear noises of trees falling.” He lives in a slum colony in Kakulia (around 1.5 kilometres from the rickshaw stand) and shares a rented room with eight other rickshaw pullers from East Champaran. 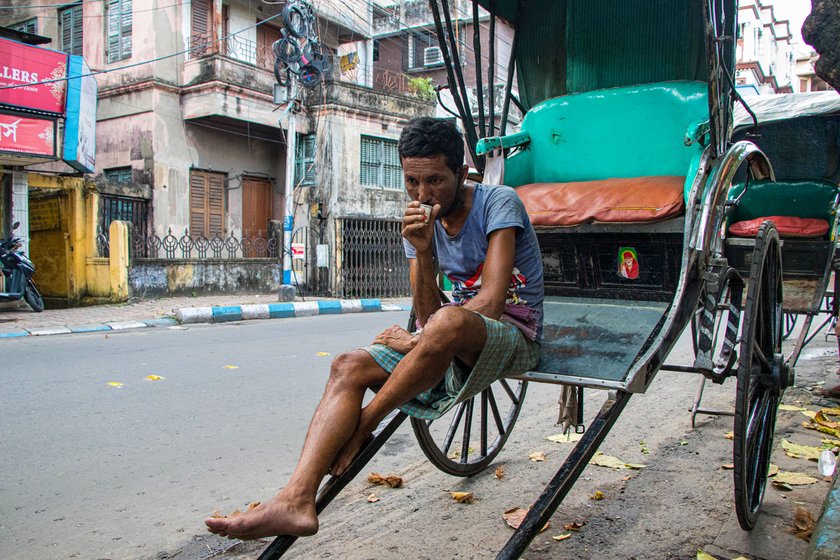 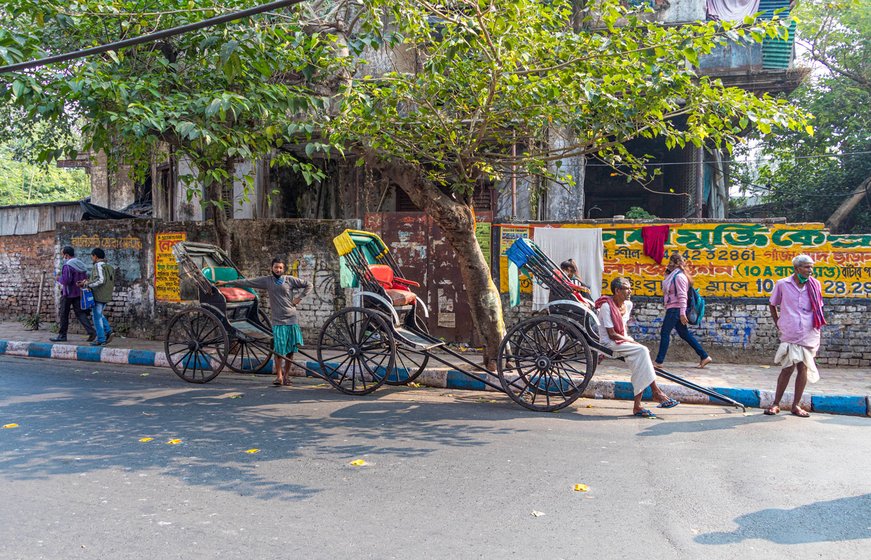 Paswan operates from a rickshaw stand in South Kolkata along with around 30 others, many of whom returned to their villages during the lockdown

After the storm passed, he returned to work the next day at noon. “I used to get a few passengers back then. Some wanted to go to faraway places like Tollygunge and Sealdah. So I charged them Rs. 500,” he says.

“Now that the lockdown is over, I don’t get such [long-distance] passengers anymore. I don’t even get [many] passengers for nearby places. Today, I have ferried only two so far,” he told me some weeks ago. “One for Rs. 30 and another for Rs. 40. People don’t want to use rickshaws anymore. They fear that they will get corona. They are afraid to come out of their homes.”

Many of Lallan’s passengers were children on their way to nearby schools. “Now all the schools are closed,” he says. “When the lockdown started, the malik [rickshaw owner] reduced the weekly rent by Rs. 50. But I am not still making much money.” At times, the situation gets so desperate that if a passenger bargains for a lower fare, Paswan agrees easily. “What can I do?” he asks.

When schools were open and there was a lot of traffic on the roads, Paswan says, “The police would restrict our movement. Sometimes, they would put up ‘No Entry’ boards. So I would take the empty [back] roads.” Despite these hurdles, Paswan prefers the hand-pulled rickshaw to cycle rickshaws. “The police catch them too, but we get caught less,” he says with a smile.

Over the years, there have been moves by the West Bengal government to ban or restrict Kolkata’s hand-pulled rickshaws, a symbol of numerous accounts and tales of the city.  In 2006, the state proposed the Calcutta Hackney-Carriage (Amendment) Bill to ease out these rickshaws. It was challenged, newspaper reports indicate, and the Calcutta High Court ordered a stay on the Bill. The Kolkata authorities though haven't issued any fresh licences since 2005, note new reports. 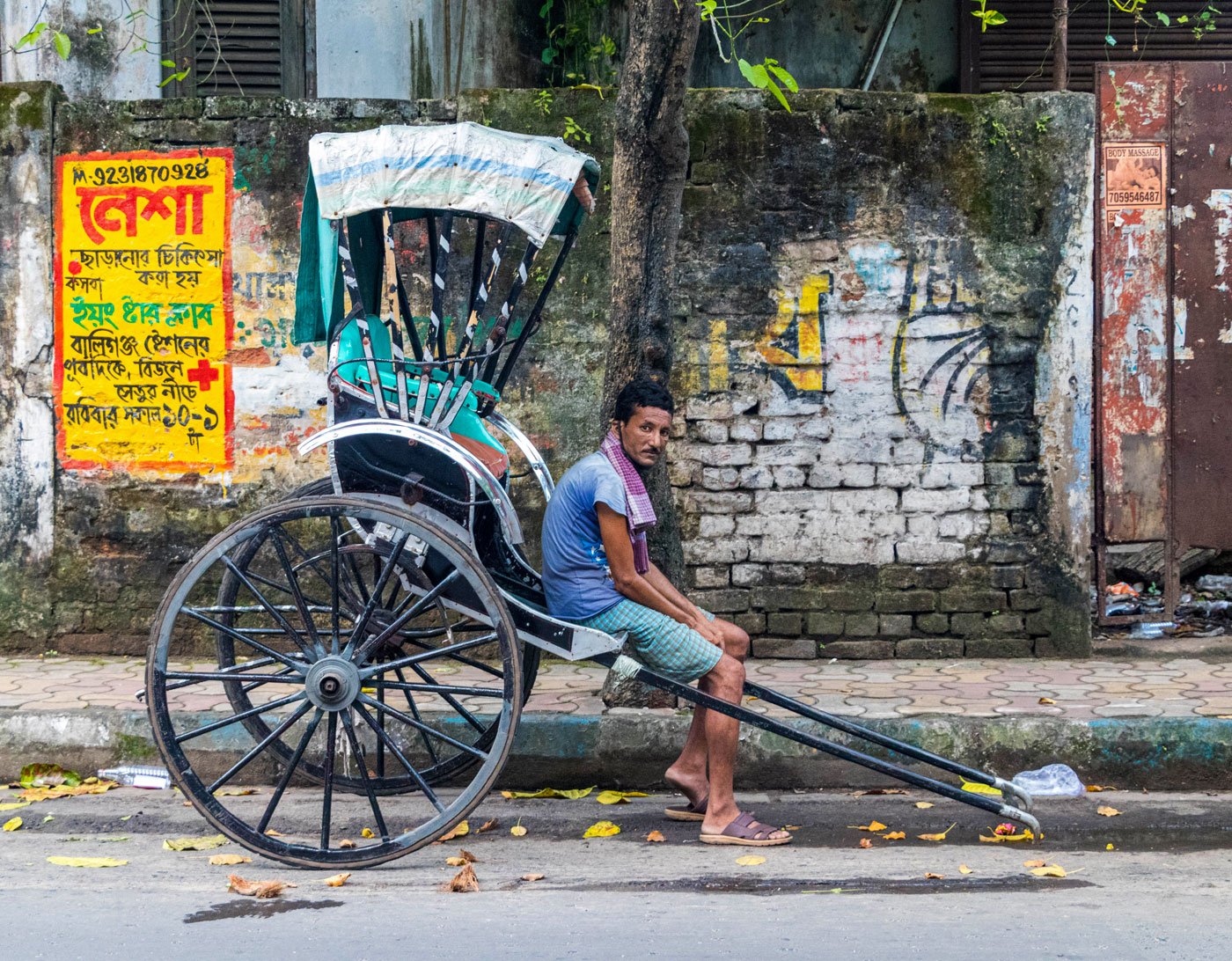 It takes Paswan around 15 minutes to cover a kilometre, pulling along roughly 200 kilos – the combined weight of the rickshaw and its occupants

Older hand-pulled rickshaws still ply, and estimates of their numbers vary. Mukhtar Ali, general secretary of the All Bengal Rickshaw Union, citing a 2005 survey (speaking to this reporter), says there are 5,935 hand-pulled rickshaws in Kolkata. Newspaper reports of 2015, quoting the principal secretary of the transport department, put the number at around 2,000. Not all of them, the reports indicate, are licensed.

And now, nearly six months after the lockdown was eased in West Bengal, Lallan is making between Rs. 100 and Rs. 150 a day. In the mornings he often waits at Ballygunge station, where he can now fairly easily find passengers. And he’s been able to start saving some money (which he keeps with a paanwallah from Bihar) and sending it to his family.

Paswan used to visit his village every three to five months, and worked in the field with his father, mother and wife. “My family usually eats the rice and wheat grown on our land,” he says. “If we have extra, we sell around five quintals, sometimes 10. But this year, the crops were washed away by the floods [in July 2020]. We didn’t have any left to feed ourselves, let alone sell,” he says.

He hasn’t been back to Raghu Nathpur village since February this year, and says that his daughters, seven-year-old Kajal and four-year-old Karishma, are anxious to see him after 10 months. “My children ask me when I will come home. I told them that I will come there during Diwali [in November],” he says. He couldn’t go because of the loan pending with the mahajan .

So he waits, along with other rickshaw pullers at the stand, at times playing cards or taking a nap. “This work is of no value for my future,” he says. “But I will continue to do it as long as I can for my children.”