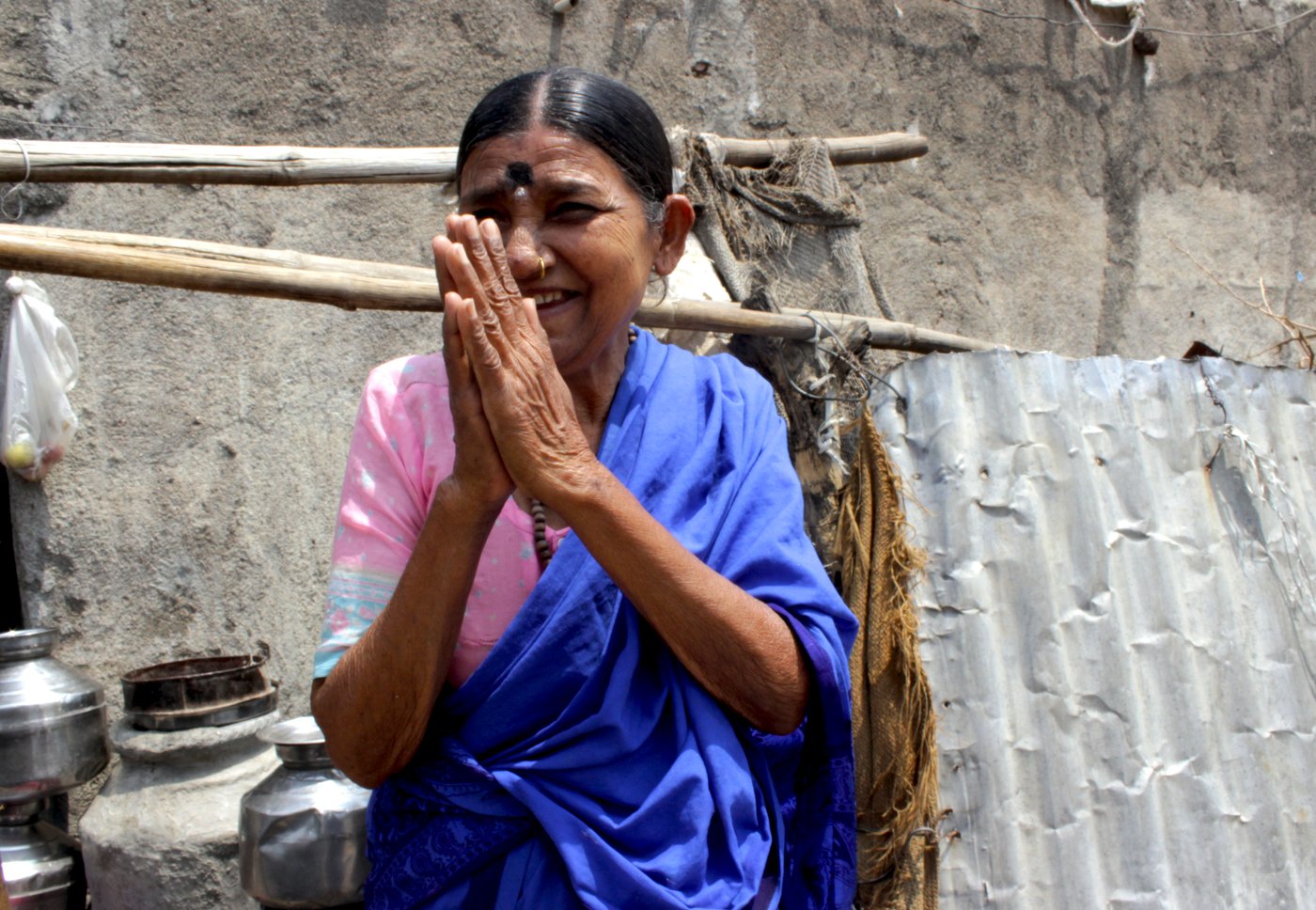 ‘Keep working and look for the divine everywhere’

In Muktabai Jadhav's sparse home, Dr. Ambedkar, who rejected Hinduism and god, stands steady among numerous deities. She had recited a few ovi for the Grindmill Songs Project in 1996. In April 2017, we revisited her home in Bhim Nagar, Beed district

“Where is Muktabai’s house?” we asked. A woman pointed to a small room, around 10 by 15 feet, fenced on one side with pieces of tin sheets. From a gap in the fence, we saw an open door. An elderly woman peeped out.

In April 1996, we had visited Bhim Nagar in Majalgaon taluka and listened to Muktabai Jadhav’s ovi . In a few hours, we had recorded several grindmill songs by women living in this hamlet.

Now, exactly 21 years later,  I was back in Bhim Nagar, in early April 2017. Muktabai  gently opened the door and let us in: “ Ya deva [welcome god]!” She was wearing a blue saree, a string of large beads around her neck, black and white vermillion on her forehead, and had still-black hair that defied her age. Muktabai, probably in her 60s, bowed down and once again welcomed us: “Come, god!”

There were two pits adjacent to the entrance to her tin shed, possibly to store water. We carefully stepped over an open sewer that ran along the house and went inside. Muktabai’s tiny home was crowded with things. A photograph of Babasaheb Ambedkar was placed next to a television that was playing the devotional Astha channel. Another photograph of Dr. Ambedkar along with his 22 oaths ( see explanatory note ) was on one wall. Adjacent to that was the goddess Tulja Bhavani’s image. The wall was adorned with countless photos and posters of other deities and religious leaders, including Sailani Baba and Prajapita Brahma Kumari. As if that was not enough, many deities had also found a place in her small household shrine. Muktabai generously accommodated four of us in this melee of gods and goddesses. 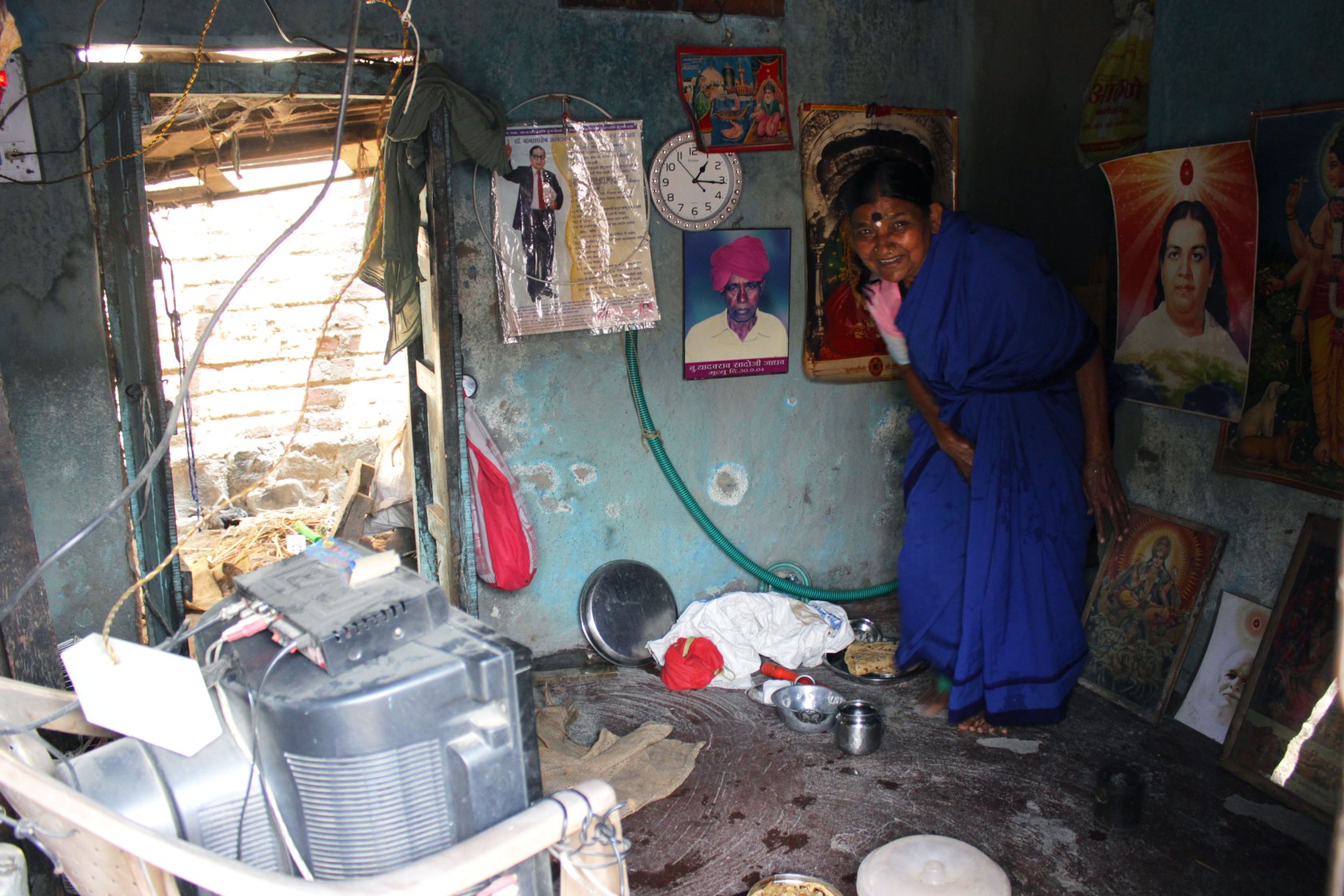 (Note: Babasaheb Ambedkar converted to Buddhism on October 14, 1956, at the Deekshabhoomi in Nagpur. At the stands an inscription of the 22 vows that he took, including the cornerstones of Buddhism: Buddha, dhamma and sangha . It also includes vows that reject several beliefs and rituals attributed to the Hindu religion. The oaths also assert a belief in equality and an endeavour to establish equality .)

Muktabai put a light quilt on the floor for us to sit. I reminded her of our last visit and of the ovi she sang at that time. I told her that we wanted to listen to those songs again. She recited one ovi on Ambedkar, about his death.

Bhim is dead, place the sandalwood seat to give him a bath*

Bhima, women from Bombay worship you with wick lamps

(Note: This refers to the practice of bathing a corpse before cremation)

She recited a portion of another ovi , but unable to remember all of it, wiped away her tears. Muktabai then urged us to eat something. Pointing to the cooked vegetable in a pan, she repeated, “Dear, eat something.  No one leaves my house without having some food. If not food, let me make some tea for you.” We said we couldn’t stay for a meal or tea. As a last resort, she offered us a spoonful of sugar. We took a pinch of it to celebrate this sweet memory and promised to come back again sometime later. Muktabai was still not willing to let us go without accepting something from her. So finally I took the coconut that she offered with great care and love. When we took her leave, she again said, “ Ya deva , come again, dear god!”

She recited a portion of another ovi , but unable to remember all of it, wiped away her tears. Muktabai then urged us to eat something: 'Dear, eat something. No one leaves my house without having some food...'

I remembered Gangubai Ambore from Parbhani, who we had also met 20 years ago while recording for the Grindmill Songs Project. Lonely, rejected by her family and afflicted by leprosy, she spent decades living in a temple and communing with the moon in the temple’s courtyard. Here, Muktabai’s home itself was a temple. And she was looking for god’s presence in human beings around her, welcoming them with “ Ya deva …”

Muktabai lives alone. Her husband is no more and she has no children. She has neither a companion nor anyone to care for her. She lives on what others in the village give her. Television programmes help her pass the time.

Her collection of idols and images of many deities from various sects and traditions is perhaps a way for her to overcome loneliness. Perhaps she had a belief that it will be god and not human beings who will visit her. Or maybe she was searching for that divine element in every person she met. Her warm welcome, “ Ya deva , welcome god…” – was it her way of revering the presence of god in each person?

“If our mind is constant, then god does not change” Muktabai said. “We should keep working and look for that divine presence [around us].”

I still ponder the puzzle that is Muktabai. Her house is fenced, but the door remains open for every one. She reveres Dr. Ambedkar who rejected Hinduism and god, but in her home, he stands steady among numerous deities and gods.

Note: We revisited Muktabai Jadhav on the exact date that I first met her in 1996 – April 2. Two decades ago, she had recited a few ovi on Dr. Ambedkar. We now wanted to record videos and take photographs of performers like her. On this visit, I was accompanied by Namita Waikar and Samyukta Shastri of PARI.