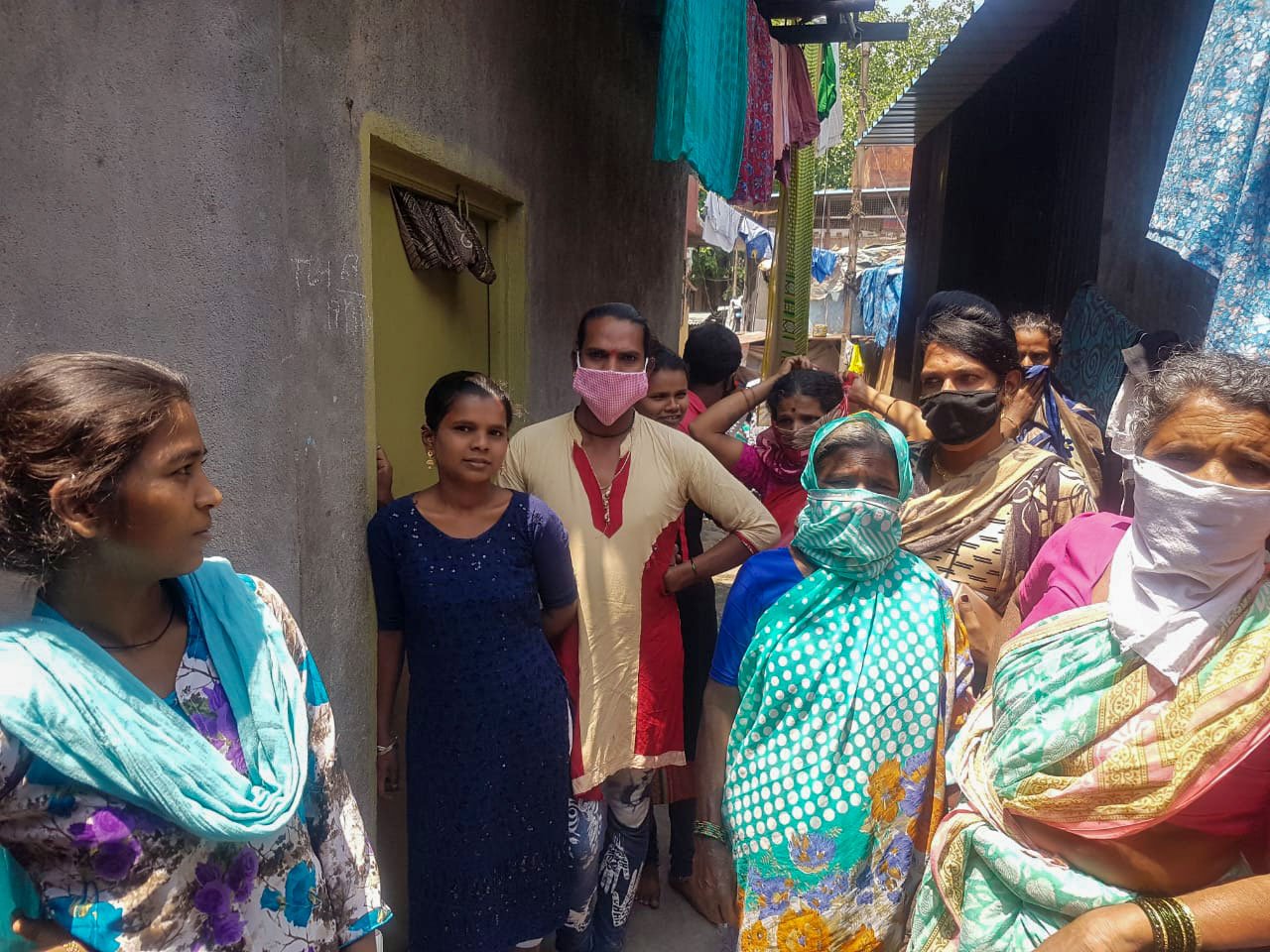 Hunger on the table, city under lockdown

The promise of free rations does not assure food on the table during the Covid-19 lockdown for domestic workers and municipal staff, many of them migrants, living in Pune's Kothrud neighbourhood

“We all exist hand-to-mouth and fill our stomachs by doing domestic work. But now there’s no work, so where will we get money?” said Aboli Kamble, a resident of Laxmi Nagar colony near Kothrud police station in Pune city. “There are no rations. If food is not available, how will the children live?”

Aboli’s anger and despair were evident in her voice when, five days after the Covid-19 lockdown was announced, I visited the slum colony where she lives on March 30. “At least at such times we should get food grains at the ration shop,” said the 23-year-old. “All the women are at home. The police do not allow us to go out. If we can’t go out and work, we can’t buy provisions for ourselves. We are very worried about how to manage running our homes. If we don’t get food grains at such a difficult time, what is the use? If we don’t get rations, should we hang ourselves?” Aboli’s family came to Pune city from Akolekati village in Solapur district in 1995. Aboli was to get married on April 16, but her wedding has been postponed now.

When I visited the colony, where around 850 people live in seven chawls (estimate NGO surveys), the women there had organised a meeting – many of them are domestic workers – to seek a solution to the scarcity of food and money. Most of Laxmi Nagar’s 190 families are migrants from Ahmadnagar, Beed, Solapur and Latur districts in Maharashtra, and from neighbouring Karnataka. Many of them belong to the Matang community, a Dalit caste.

When Prime Minister Narendra Modi announced the 21-day lockdown on the night before Gudi Padva, the Maharashtrian new year, it was not clear if essential items would be available the next day. People scrambled to buy whatever they could from the shops that were still open – but prices had gone up already.

The government later announced that food and other essential items would be made available, and also that families below the poverty line (BPL) would additionally receive three months of free rations from the public distribution system (PDS).

Watch video: 'With no food now, should the people hang themselves?'

Many families in Laxmi Nagar are not hopeful of getting the free rations promised to them because even in the past they have not received rations regularly. “The families who have a yellow card also don’t get it,” one of the women said, referring to the ration card issued by the government to BPL families.

Despite having a ration card, several obstacles prevent many from receiving subsidised food grains from the PDS shops. “I have a card. But the shopkeeper says that my name is not on it. I have not got rations till today,” said Sunita Shinde, who moved to Pune from Mumbai after her husband died.

One of the women showed me her ration card, which was stamped to prove that she was eligible to receive subsidised rice and wheat. “But the shopkeeper says that the ration has been stopped for my card. It is two years now that we don’t get the ration,” she said. Another woman, a senior citizen, said, “I don’t get rations because my thumbprint does not match what they have in their system [Aadhaar biometrics].”

Without rations, work or wages, the women and families of Laxmi Nagar are struggling. Nanda Shinde, a widow, said, “I used to work before, but now that has stopped because of corona. So getting food has become big problem. The shopkeeper throws away my ration card when I go there.” Nanda Waghmare, who washes dishes and utensils in a restaurant added, “I’m doing nothing now. I go to the shops with my ration card but they tell us to get lost.” 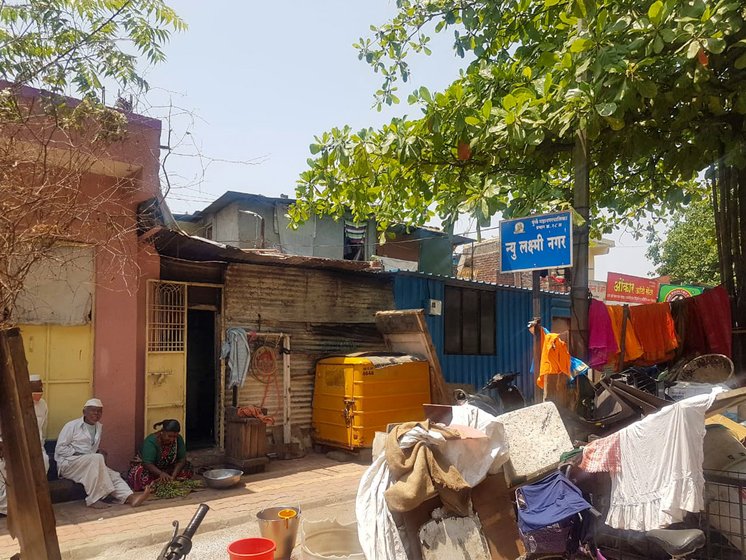 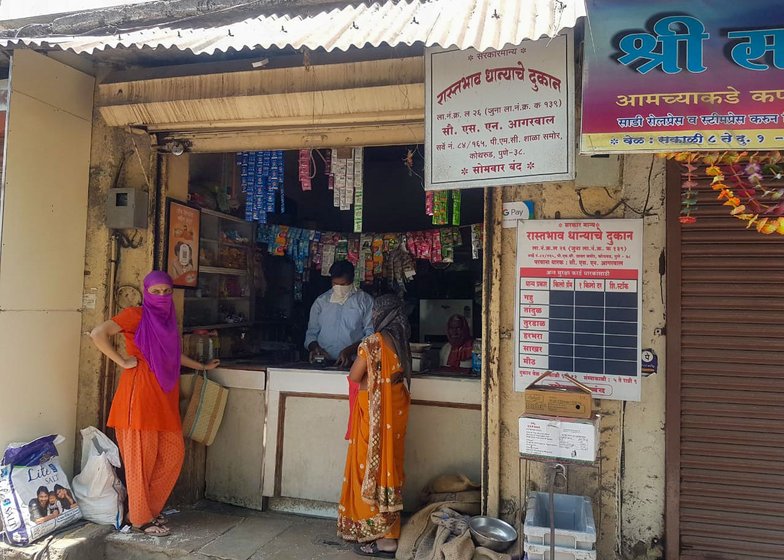 Left: Laxmi Nagar colony in Kothurd. Right: A ration shop in the area, where subsidised food grains are purchased

And when a family does not even possess a ration card – around 12 such families in the colony – their search for food has become even harder. They have no way of procuring rations – not even the free foodgrains promised under the government’s relief package. “Modi announced that everybody will get foodgrains. But we don’t have a ration card, so how will we get it?” asked Radha Kamble.

For those who can purchase foodstuffs from the PDS shops, the quantity they can buy is often insufficient. “We are a family of four and we get five kilo wheat and four kilo rice. It is not enough for us. We should get 10 kilo wheat and 10 kilo rice every month. Since the ration is not sufficient, we buy from the market at higher rates,” said Lakshmi Bhandare.

Yogesh Patole, a ration shop owner in nearby Shastri Nagar, told me, “I give three kilo wheat and two kilo rice per person now, to ration card holders. We have not yet received the food grains that was promised to be distributed free for three months.” A text message from the local municipal corporator, promising the distribution of food grains in the ward by April 10, hasn’t done much to assure Laxmi Nagar’s residents. “How can people survive until that date? Will they even have balance talktime on their mobile phones then?” wondered one, showing me the message.

Their homes are small and congested, and there is no space to stock up food grains. Some of them don’t even have a functioning kitchen

Watch video: 'We have not been paid for 3 months. So what should we eat? '

In Lokmanya colony, adjacent to Laxmi Nagar, more than 200 of the 810 families say that although they have a ration card they don’t receive rations. The majority of the colony’s 3,000 people earn a living as sanitation workers, scrap collectors, daily wage labourers, construction workers, domestic workers and security guards.

Their homes are small and congested, and there is no space to stock up food grains. Some of them don’t even have a functioning kitchen and so they depend on leftovers from eateries, restaurants and the food that other families in the locality give them. Those who go out to work every day sit in the open space outside their homes when they return. Protective masks are a luxury they can’t afford. Some of them, contract workers with the Pune Municipal Corporation (PMC), have been given masks by a non-governmental organisation, which they wash and reuse.

Over 1,000 PMC contract workers in the Warje, Tilak Road and Hadapsar areas of the city have not been paid their wages for three months, said Vaijinath Gaekwad. He is a mukadam (supervisor) with the city corporation and a member of the Mahapalika Kamgar Union. Their chances of getting paid are bleaker now, he adds.

One such contract worker with the PMC’s health and sanitation department, who did not wish to be named, showed me the empty food containers in his family’s kitchen (see video). “We have spent all our savings and can no longer survive unless our unpaid dues are given to us by the municipal corporation,” he said. “We are going to die of hunger while being forced to sit idle at home.”