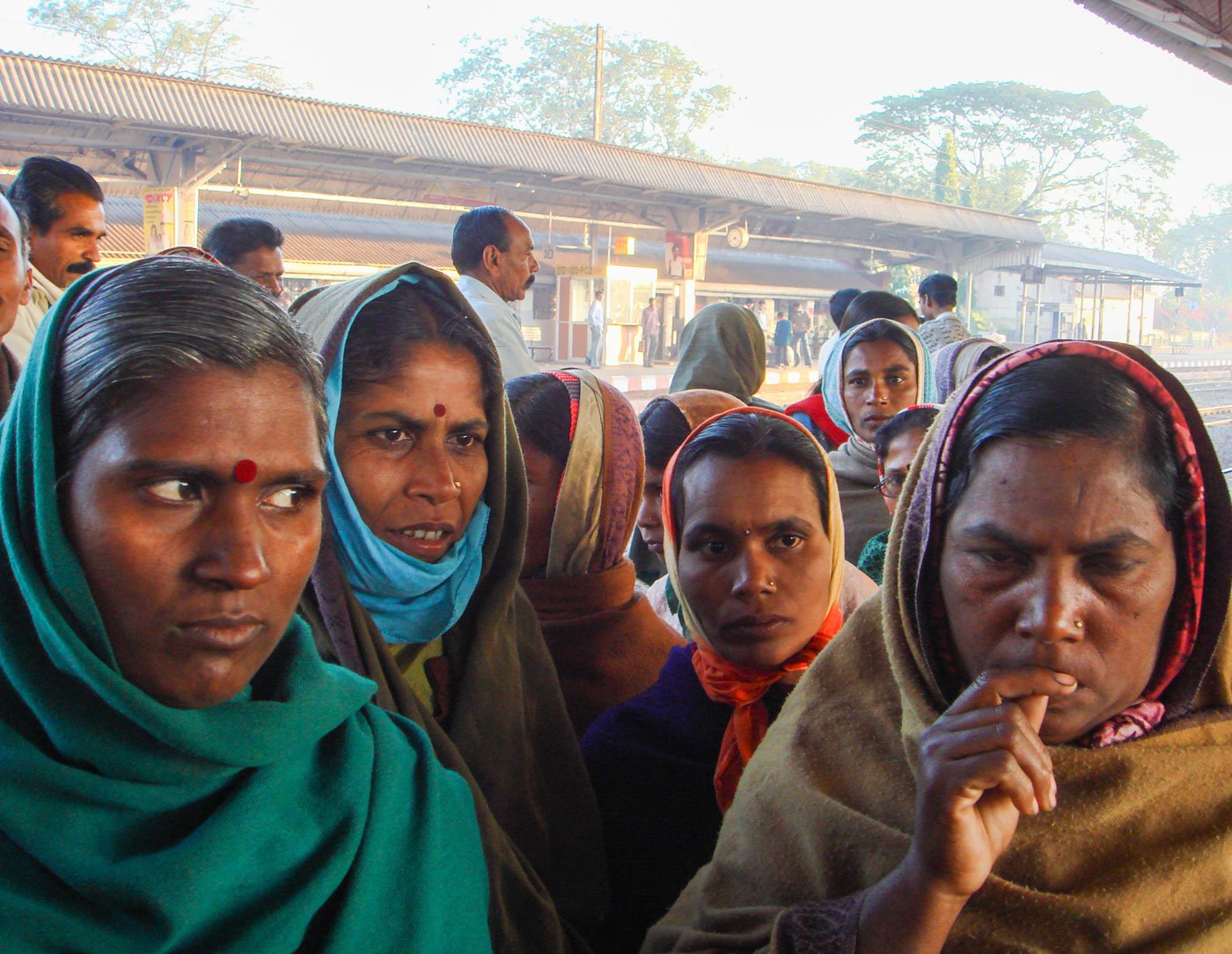 It's been A Hard Day's Night

Hundreds of women in eastern Maharashtra's Gondia district travel from small towns to nearby villages to earn a daily wage. This is a much less studied form of migration – urban to rural

On May 1, International Workers’ Day, we republish this piece in honour of the women workers of Gondia, whose situation has not much improved since this story first appeared in The Hindu on January 27, 2007.

Revantabai Kamble has not spoken to her six-year-old son for months. They live in the same house in Tirora, of course. It's the same with Buribai Nagpure, though she might sometimes see her older boy if he's awake. Both women are among hundreds in this part of Maharashtra's Gondia district who spend just four hours a day at home and travel over 1,000 kilometres each week to earn Rs. 30 daily.

It's 6 a.m. when we accompany the women from their homes to the railway station. Most have been up two hours already. "I've finished the cooking, washing, sweeping and cleaning," says Buribai, cheerfully. "So now we can talk." No other member of her household is awake when we arrive. "Poor things," she says, "they're tired out." Isn't Buribai tired out, too? "Yes, but what to do? We have no options."

At the station are many other women without options. They are also unusual in one sense: these are not migrants from village to city. They are footloose workers from an urban setting seeking work in the villages. This search takes them from moffusil towns like Tirora, which is a tehsil headquarters, to toil as agricultural labourers in the villages almost every day of their lives. Spending up to 20 hours away from home daily. There are no weekend offs and no jobs in Tirora. "After the beedi industry went," says Mahendra Walde, district secretary of the Kisan Sabha in Gondia., "it is impossible for them to find work here." 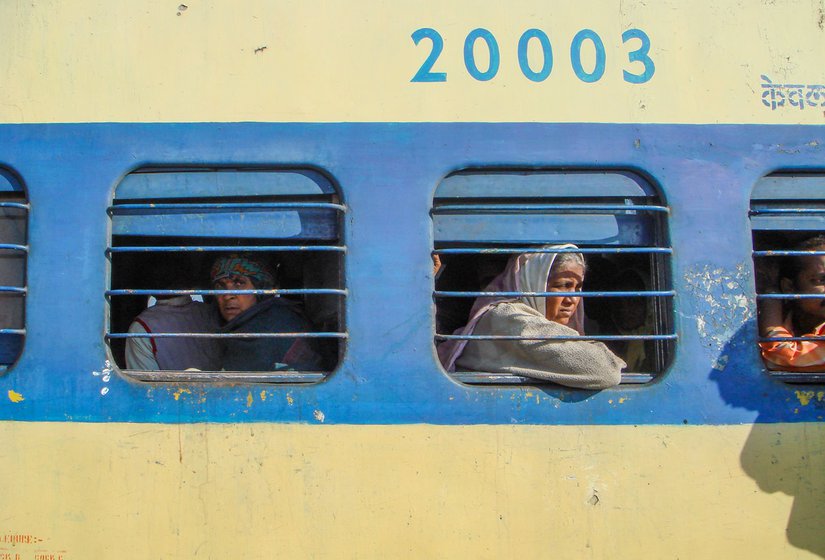 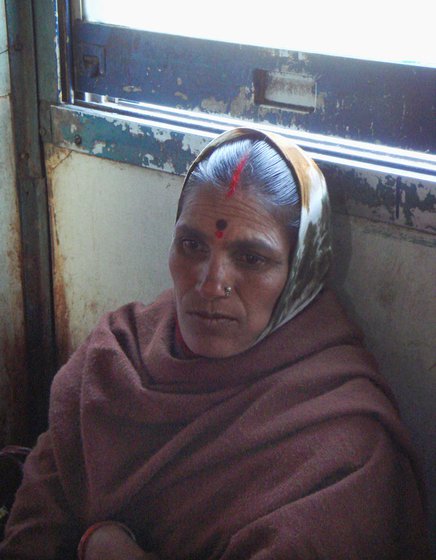 On the platform and in the train are more women like Buribai Nagpure (left) and Shakuntalabai Agashe (right), weary-eyed, hungry, half-asleep

Many of the women live five or more kilometres from the railway station. "So we have to be up by 4 in the morning," says Buribai, who is probably in her late 40s. "We finish all our work and walk to the station by 7 a.m." That's when the train comes in and we clamber on with the group that will go to Salwa in rural Nagpur. The 76-kilometre journey takes two hours. On the platform and in the train are more women, weary-eyed, hungry, half-asleep. Most sit on the floor of the crowded train, leaning against the carriage wall, trying to snatch some sleep before their station arrives. Salwa, in Mauda tehsil of Nagpur district, is a village of just 105 households and less than 500 residents.

"We will reach home at 11 at night," says Revantabai, who is in her 20s. "We sleep by midnight. And start all over again at 4 the next morning. I have not seen my six-year-old awake in a long time." Then she laughs: "Some of the much younger children may not recognise their mothers when they do see them." Their children have either dropped out of school because they cannot afford it. Or perform poorly there. "There is no one at home to watch or help," points out Buribai. And some of the youngsters are themselves doing any work they find.

"Naturally, they do badly at school," says Lata Papankar, a teacher based in Tirora. "Who can blame them?" It appears the government of Maharashtra can. The performance of these children is held against the schools, which might lose funds. And against teachers trying to help them, who might be penalised for poor results. An approach that will further erode their chances of going to school.

Seated on the rocking floor of the train, Shakuntalabai Agashe, who is around 50, says she has been doing this for 15 years. The only breaks come during festivals or the monsoon. "For some kinds of work," she says, "we may be paid Rs. 50. But that's rare. Mostly it's Rs.25-30." There are no jobs in their towns, say the women. 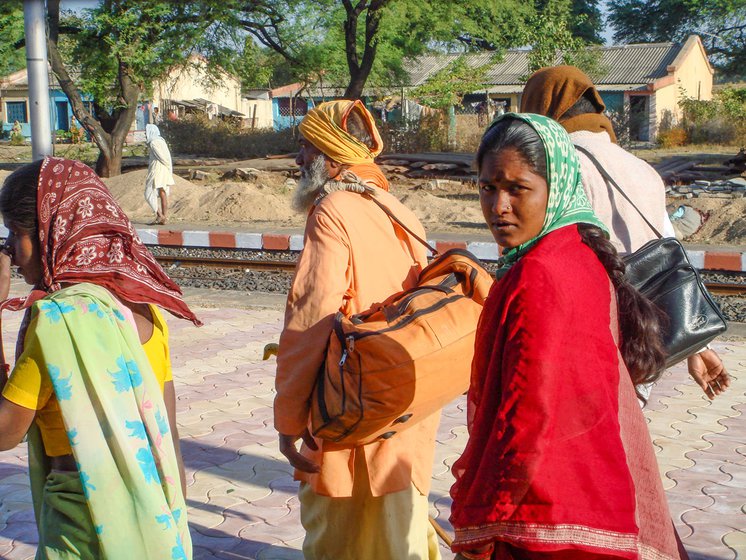 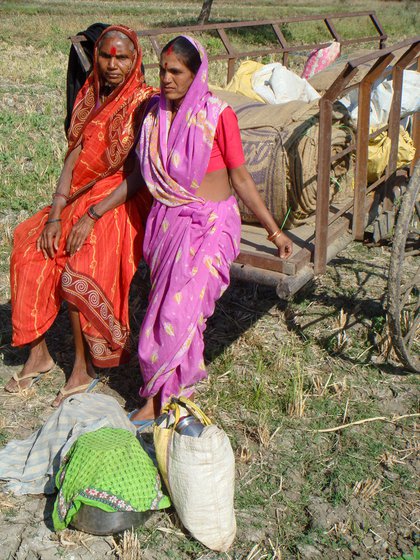 Revantabai Kamble (in red, left), Shakuntalabai and Buribai (right) spend just four hours a day at home and travel over 1,000 kms each week to earn a few rupees

The money there is has flown to the cities. The industries there were have closed down. The moffusil towns are in decay. Almost all these women here found work with the beedi industry in the past. "When that went we were finished," says Buribai. "Beedi is a footloose industry, ever in search of cheaper labour," says K. Nagaraj of the Madras Institute of Development Studies who has worked on the sector. "It shifts base quite quickly. The human consequences of such shifts are devastating. And have gone up these past 15 years." A lot of beedi work "has gone off from Gondia to Uttar Pradesh and Chhattisgarh," says Pradeep Papankar of the Kisan Sabha.

"Of course we do not buy tickets to travel on the train," the women say. "A round ticket would cost more than the Rs. 30 we earn. Our system is simple: if we get caught, we pay the checker a bribe of Rs.5." Ticket revenue has been privatised. "They extort it from us knowing we can't afford it."

"My older boy drops me at the station on his cycle sometimes," says Buribai. "Then he stays there looking for any work, whatever the pay. My daughter cooks at home. And my second boy takes the meal to his brother." In short, says  Walde, "three people are working for the wage of one." But all five family members together, including her husband, often make much less than Rs.100 a day. Some days, just two of them may have earned anything at all. And they do not have a BPL ration card.

At stations along the way are labour contractors, waiting to pick up workers on the cheap.

Reaching Salwa around 9 a.m.we set out a kilometre to the village and a further three kilometres into the fields after a brief stop at landowner Prabhakar Vanjare’s house. Buribai does that last stretch with a huge vessel of water perched on her head, yet outpaces all of us. 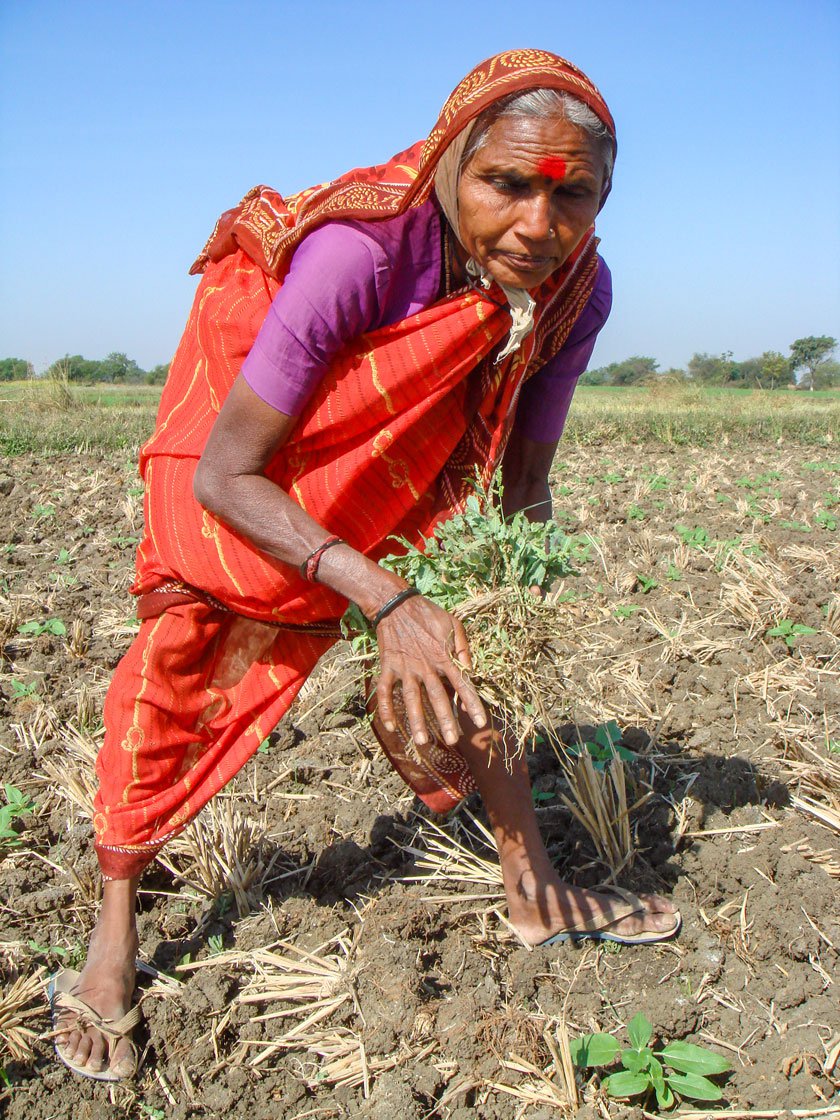 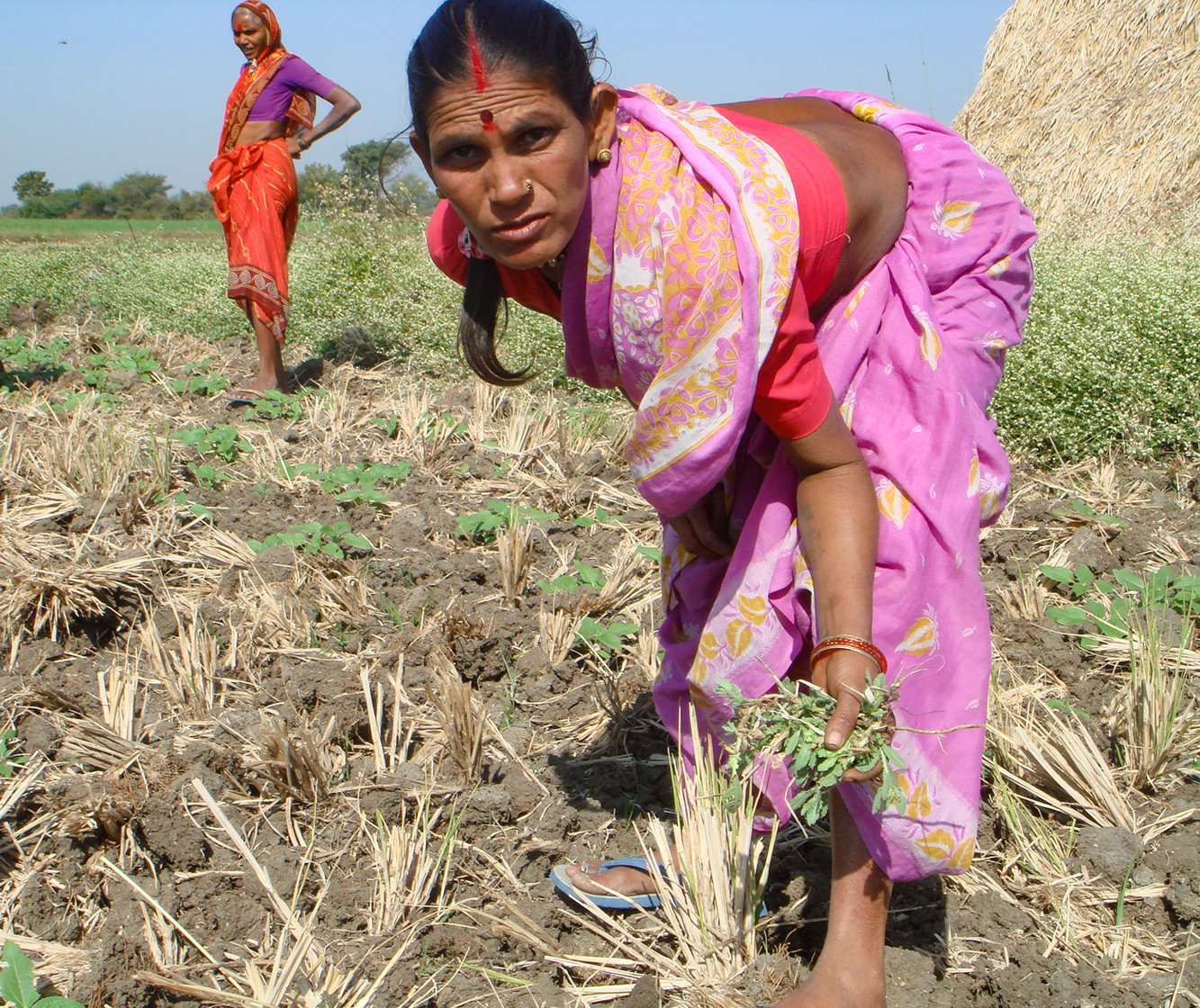 Those on whose fields they labour for a pittance are also in trouble. The agrarian crisis has hit Vanjare badly. He owns three acres and has taken 10 on lease. "Prices are terrible, we earn almost nothing," he complains. And resident labourers in the village have migrated elsewhere in despair. Hence the coming of these women.

This is eastern Vidarbha, away from the troubled cotton belt. Vanjare grows paddy, chilli and other crops. Right now, he just requires the women for weeding work. They work till about 5:30 p.m. and get back to the station an hour later.

"But the train only comes in by 8 p.m." points out Buribai. "So we will reach Tirora only around 10 p.m." Their families are asleep when the women get home. And asleep when they leave in the mornings. "What family life can there be?" asks Revantabai.

By the time they reach home, they have travelled over 170 kilometres. And will do that every day of the week to earn Rs. 30. "We'll be home by 11 p.m." says Buribai, "to eat and sleep." Until four hours later, when they have to get up and do it all over again.