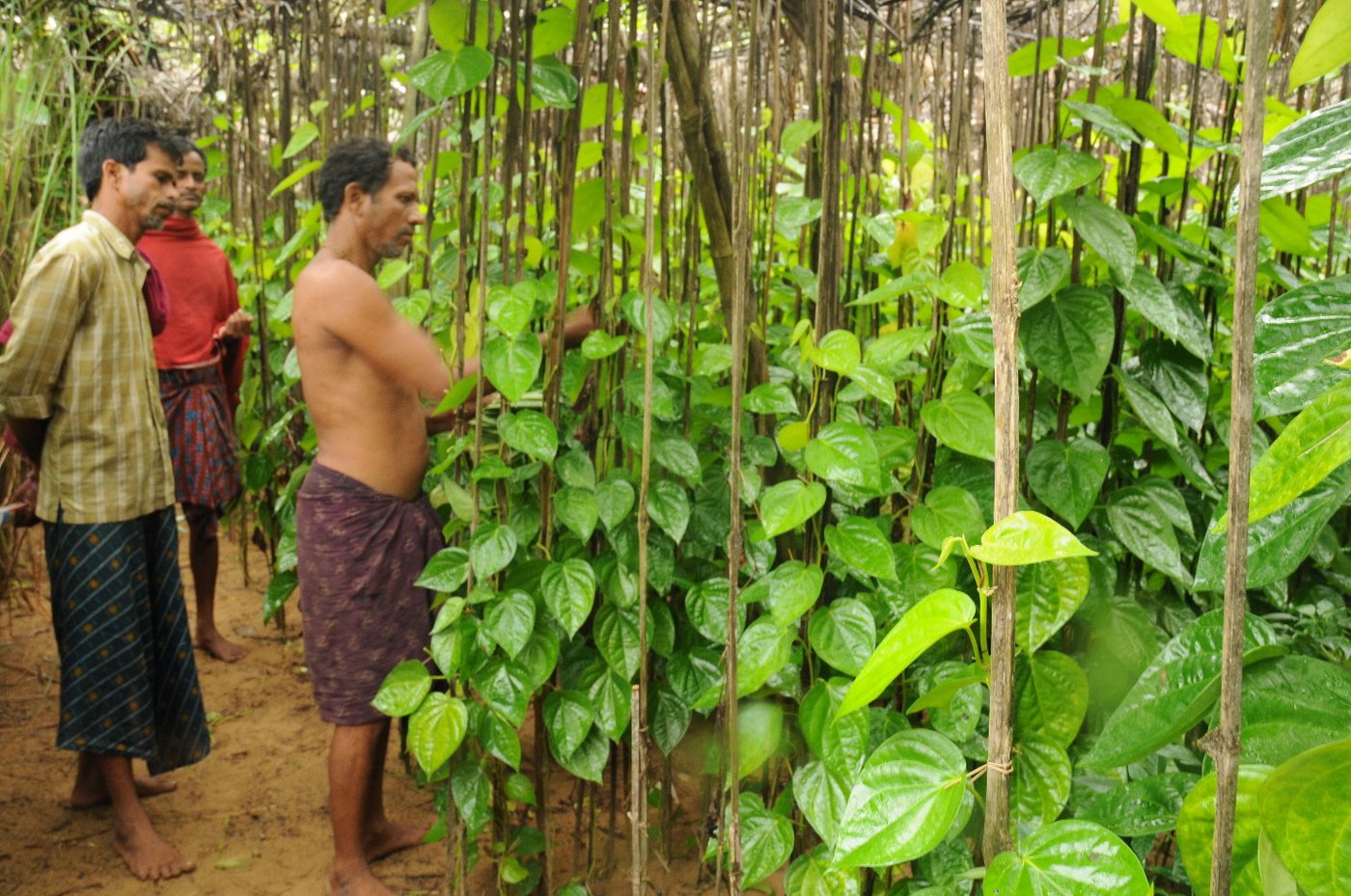 A day at the vineyards

Oddly enough, the word 'Odisha', which is the official name of the state, means 'land of farmers'

Some of that legendary ‘Banarasi paan ' could have begun its journey from Gujjari Mohanty's vineyard in Govindpur, Odisha. “I've sold our leaves in Benares [Varanasi] myself,” says her son Sanatan. As have many of their neighbours. “Our leaves are high-quality and greatly valued.” The betel leaf, though, is not just about pan. It is also valued for medicinal qualities as a digestive, for the antiseptic nature of its oil, and its use along with arecanut for treating different ailments under Ayurveda.

The vineyard is tiny, just a tenth of an acre (roughly 4,300 square feet). Multiple rows of bamboo and other sticks eight feet tall hold up, in all, hundreds of metres of betel vine ( Piper betle ). The vineyard is fenced off with bamboo also carrying other creepers. And a thin thatch of casuarina and coconut leaves cover the top. Casuarina leaves offer only a light shade and so make ideal “roofing” — since some degree of sunlight is also vital. The rows are inches apart and you have to walk sideways to cross one. It's expertly organised and feels like a pleasantly air-conditioned room.

“The work is skilled but not strenuous,” says Gujjari Mohanty who, past 70, handles it easily. It requires frequent but light irrigation. “It needs attention every day for brief periods,” says a neighbour. “But even a weak, older person can do much of this.” Some chores, though, are tougher and command twice the daily wage rate of Rs.200. In official count, Posco's project zone holds around 1,800 betel farms. Farmers here say 2,500. These vineyards would die if the farmland here were acquired for Posco's Rs.52,000-crore power and steel project. The government insists the betel farms are on forest land. The villagers, who have occupied this land for well over 80 years, demand their rights over it be recognised under the Forest Rights Act of 2006. 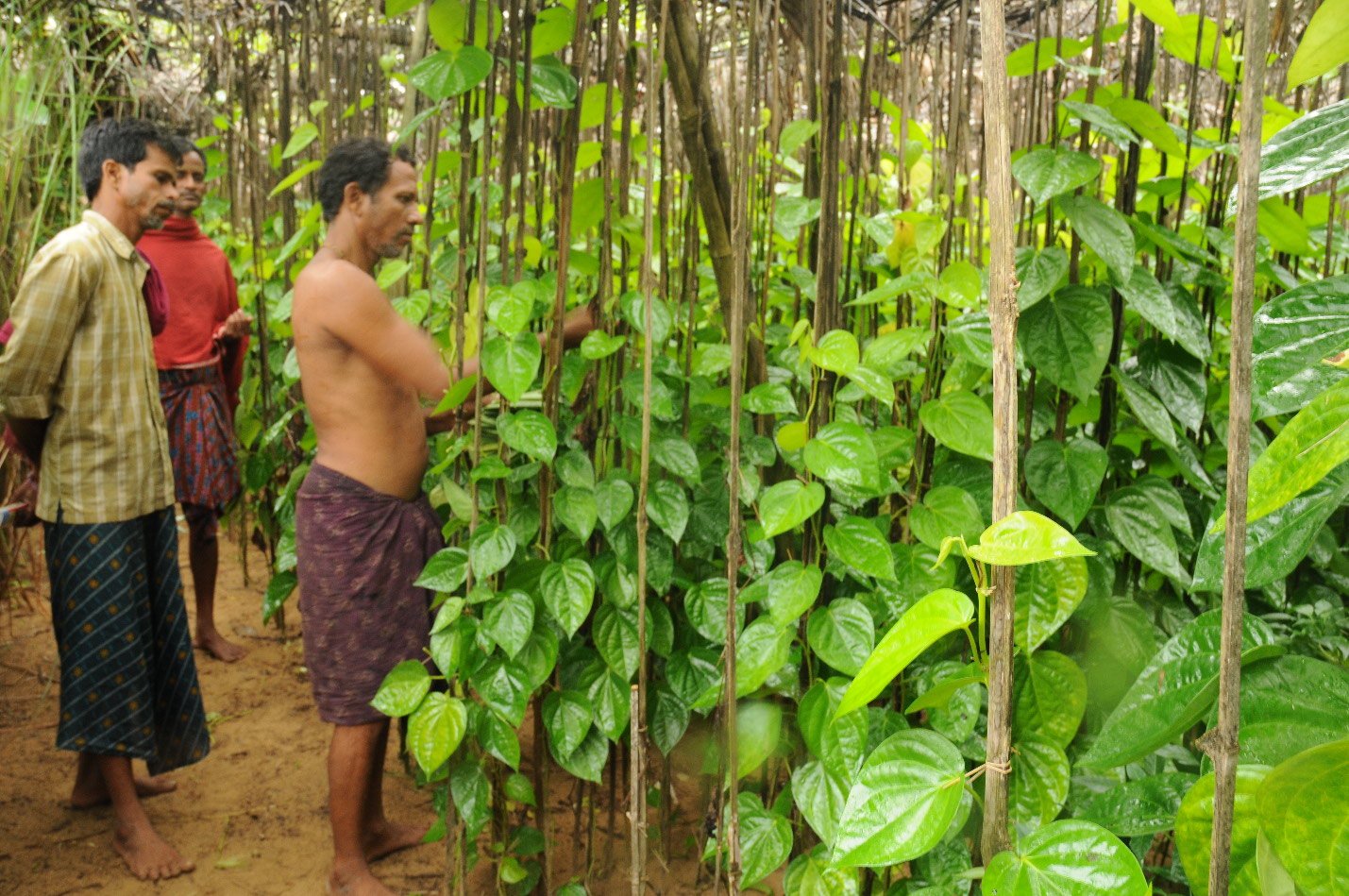 Betel farmers in Dhinkia and Govindpur villages, home to the largest number of vineyards, are resisting the takeover of their land. “Who is demanding jobs?” asks Sanatan Mohanty. “There's only a demand for labour here. We pay the highest daily wage rate.” Sanatan and Gujjari speak to us while tending the vineyard and while sorting the leaves at home into kadas (bundles of 50). In a year, they might harvest up to seven or eight lakh leaves, sometimes even 10 lakh, from this tenth of an acre. With over 2,000 farms, some of them bigger, that's a lot of leaves. And most of this is exported out of Odisha.

With countless thousands of other betel farms in the State, the quantities exported are not small. Where once it all went to Benares, their produce now reaches Mumbai, Dhaka and Karachi. That's in a scenario where agriculture and forest products now account for just 0.01 per cent of Odisha's exports, according to the State's latest Economic Survey. (Mineral and metallurgical products make up over 80 per cent.) Oddly enough, the word ‘Odisha,' which is the official name of the State, means “land of farmers.” But agriculture's share of GSDP is down to 18 per cent though well over 60 per cent of people depend on it. The communities here, along with other coastal folk, also have a share in Odisha's marine fish exports, already badly hit by Paradip port. Posco's planned captive port at Jatadhari would bury this sector.

“In the first three quarters of the year we get two lakh leaves in each, in the last one around 1.2 lakh leaves,” says Ranjan Swain, a betel farmer. “That lower yield is in the three winter months, but the quality improves and prices double in that period.” 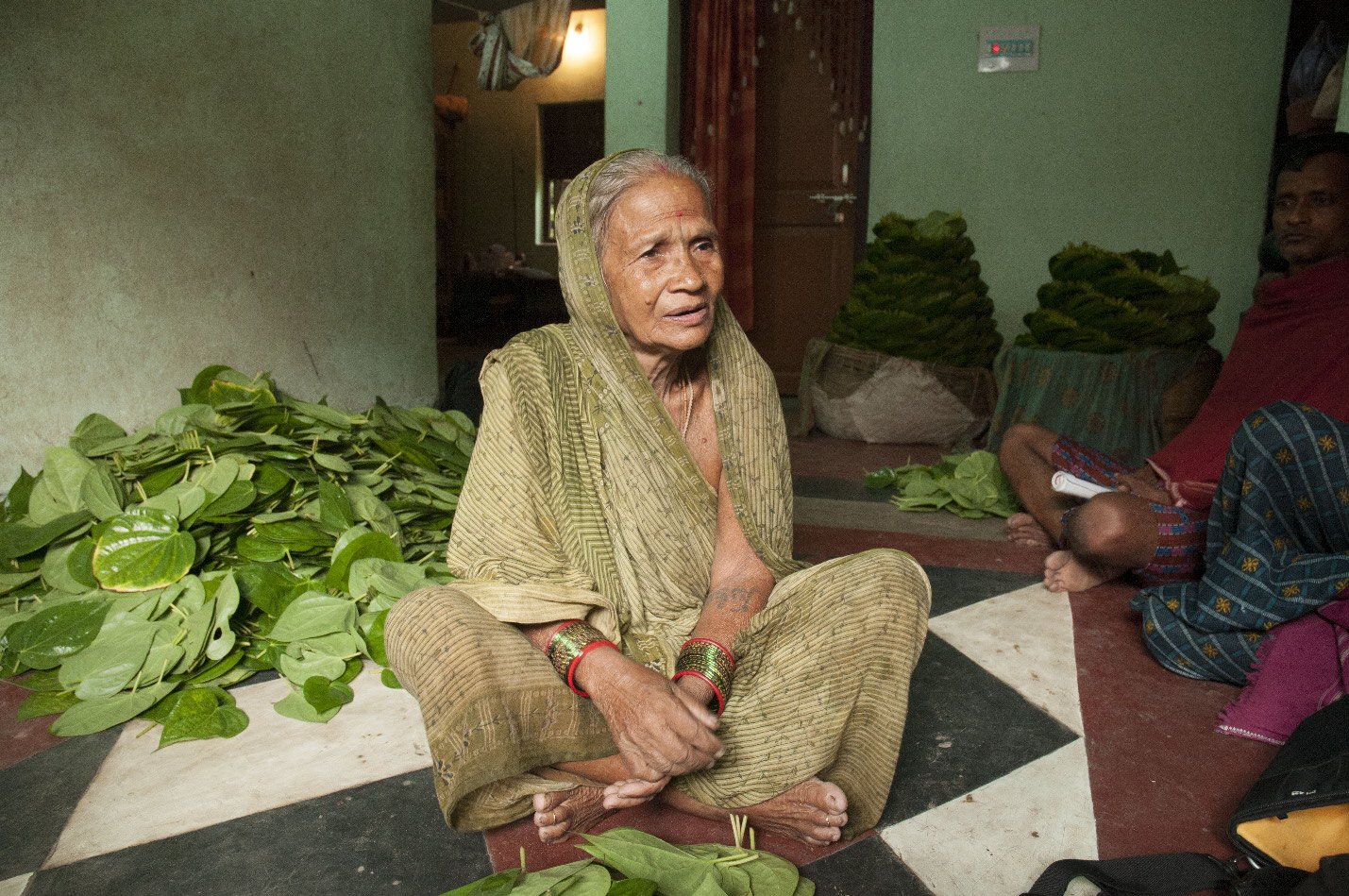 “For the first six lakh leaves,” points out Jagadish Pradhan of the Odisha Gram Swaraj Abhiyan (the Odisha village self-rule campaign), “they get Rs.450 per thousand leaves on average. That gives them around Rs.2.7 lakhs. For the remaining 1.2 lakh winter leaves they make a rupee a leaf. In all, a total of Rs.3.9 lakh.”

The over 540 work days this produces in a year in 4,000 to 5,000 square feet means a labour cost of Rs.1.5 lakh, calculates Pradhan. The wage rate here at Rs.200 and higher is above what a construction worker in Bhubaneswar gets. But workers taking on tasks like lifting and tying of the creepers command up to Rs.500 a day. Those handling manure application, Rs.400. Workers doing earth filling and fencing claim Rs.350 a day. These tasks though last fewer days in a year. It means, however, that even landless workers are unenthusiastic about Posco's project.

On average, the wage paid out is almost double the State's MNREGS rate of Rs.125. And it comes with a good meal. Then there are the costs on organic manure (oil cake), the wooden poles, bamboo pieces, rope wire, pump set maintenance. These add up to another Rs.50,000. “There are no transportation costs. The merchants pick them up from our doorstep in vans. There are a few other costs, but minor ones.” (As in much of rural India, farmers never count their family labour as a cost). After a total expenditure of around Rs.2 lakhs, they're left with between Rs.1.5 to Rs.2 lakhs each year. “And some of them,” observes Pradhan, “have more than one vineyard.” Sanatan has four. Barring a brief period after the 1999 super-cyclone, several here have managed their farms largely without bank loans. 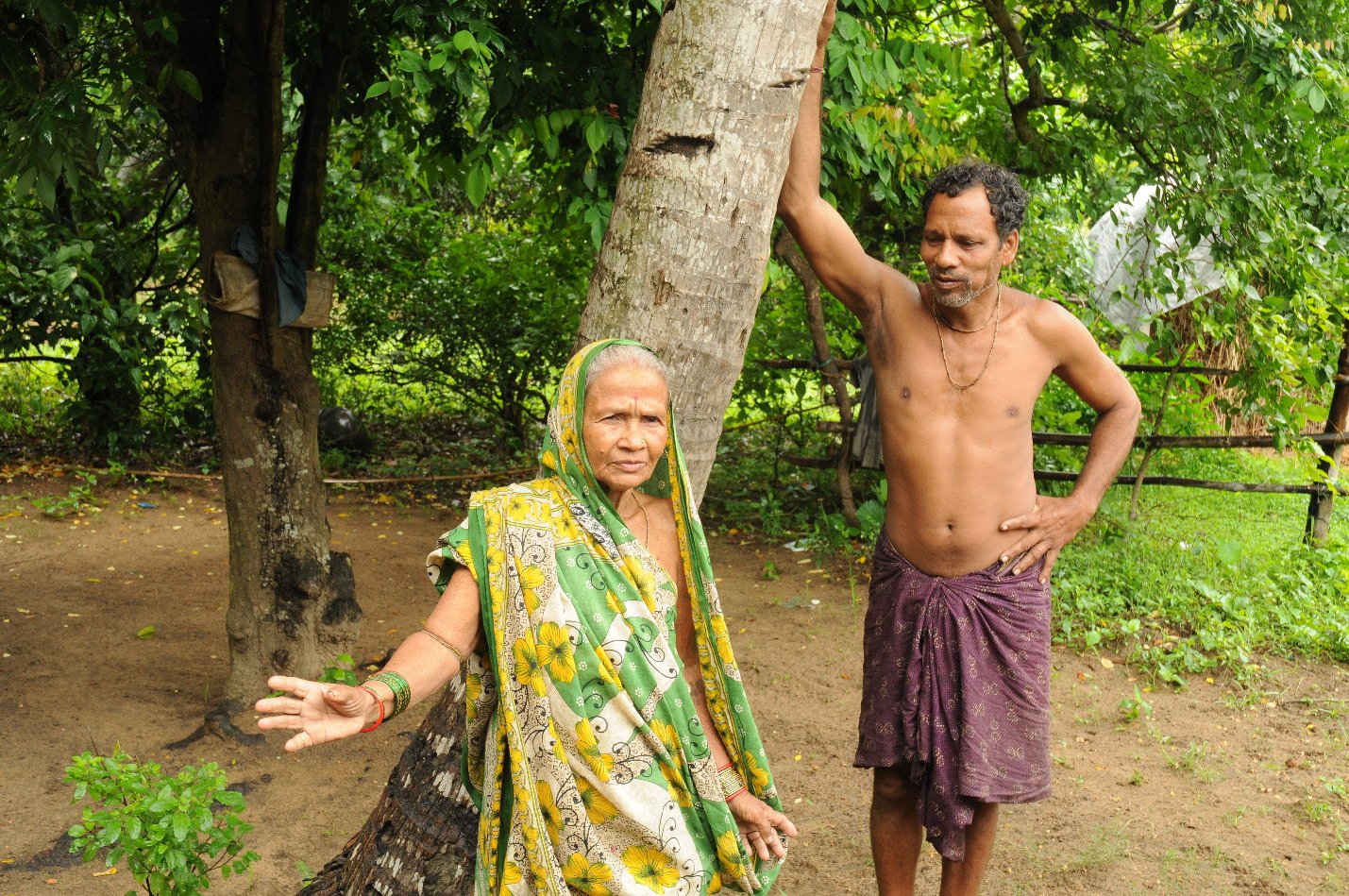 On the three acres his family have apart from the vineyards, Sanatan has over 70 species of trees, plants, fruit and medicinal herbs. (He takes one yield of paddy from a limited patch for his family's consumption.) This too is a good source of income.

Against this, the compensation the State is offering betel farms works out to Rs.1.15 lakh for a tenth of an acre farm like the one we're in now. “Imagine what we would lose,” says Sanatan. A thought shared by thousands of others. “All this for a project that has a life of 30 years. And who will give us our prawns, our fish, our wind, our highly fertile lands, our weather and climate?”

“I have spent nearly ten lakhs on educating my four children in the past several years. I am building a house that costs a little less than that. We don't need their compensation. We need our livelihoods.”

“Do they think we're idiots when they talk about jobs?” asks Gujjari. “Every thing is getting mechanised. Who goes today to the post office, buys Rs.5 stamps, and sends letters when there are mobile phones?”

A version of this article was originally published in The Hindu on July 14, 2011.