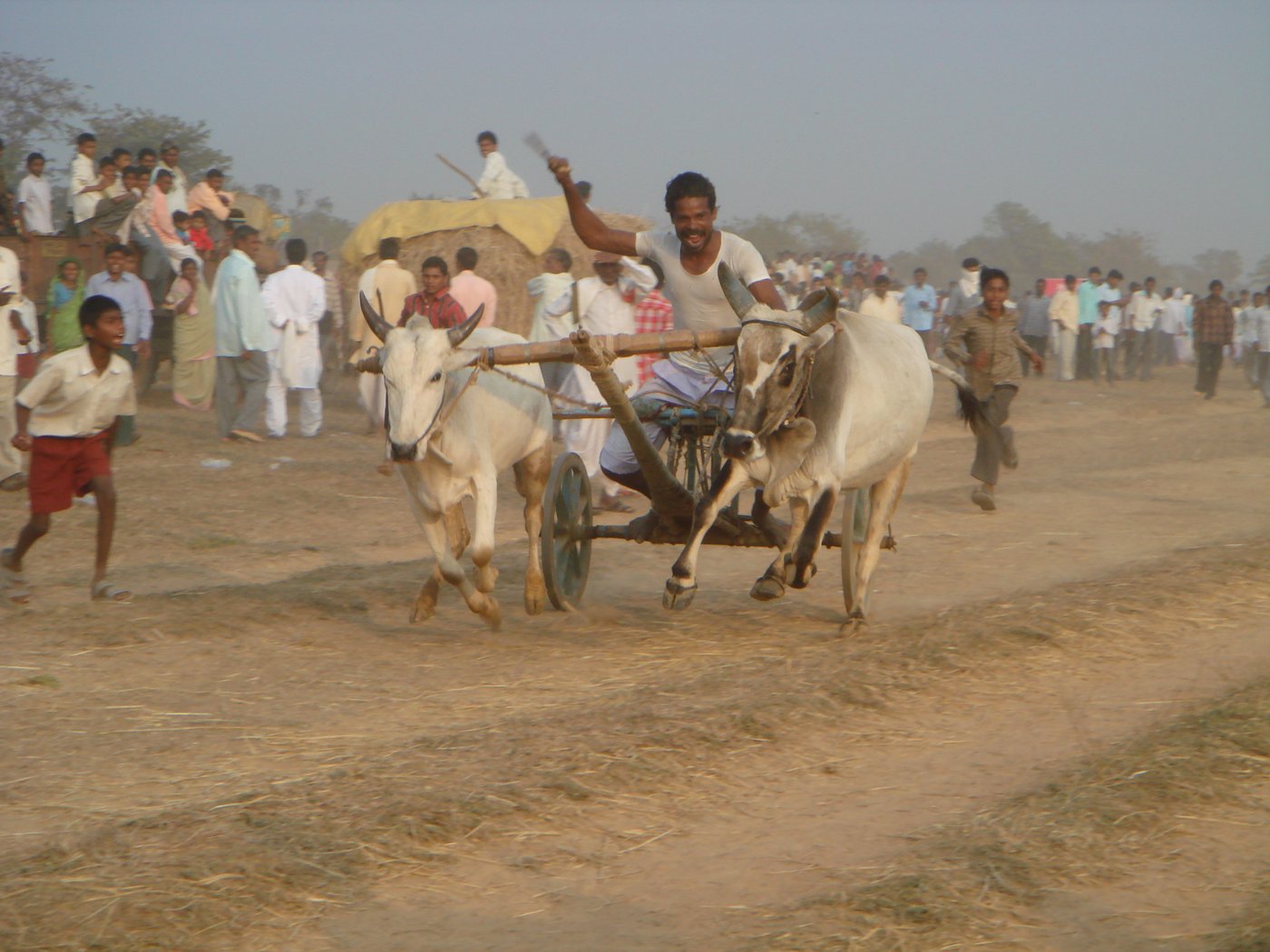 A day at the races

The bullock cart races at Delanwadi in Maharashtra’s Chandrapur district are held in a carnival-like atmosphere. But, as this author learned, dangers lurk on the track. And not just for the bullocks

“Ha!” he said. "Taking photos, uh? Well take your photos and give them to Bittu Sahgal in Mumbai.” Sahgal is editor of Sanctuary magazine. The drunk had concluded I was taking pictures of cruelty to animals. Though how this conversation could be on in Vidarbha’s Chandrapur district remains a mystery. Maybe he had worked in Mumbai at some time. Maybe a team from Sanctuary had worked in this forested region in recent times. The man was too incoherent to explain. A little later, he nearly got both of us crippled. After which I didn’t care to ask him more questions. 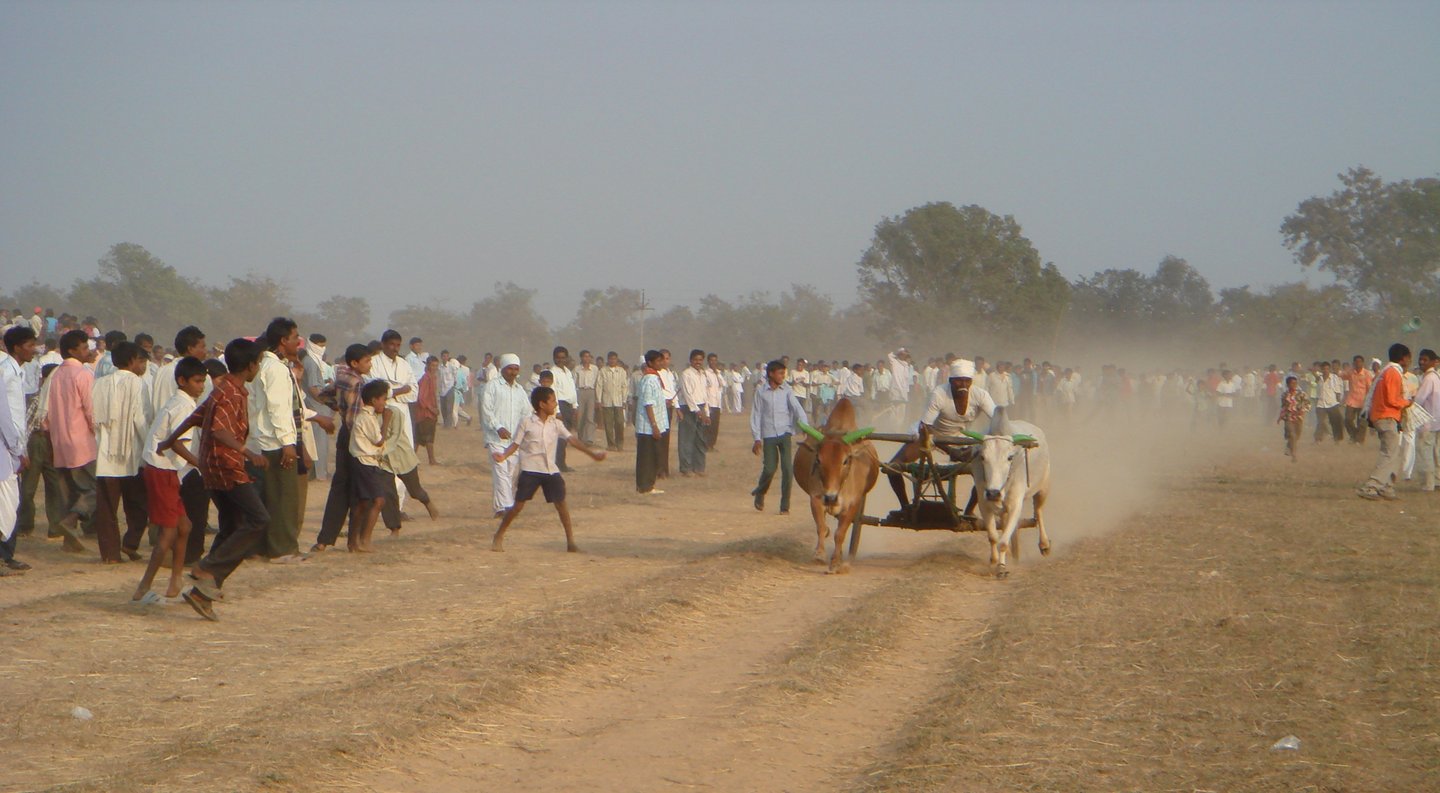 The races are more like time trials. There is not enough width for all the racers to be on the track at one time. So they're timed individually

The ‘Shankarpat’ or carnival at Delanwadi was on in full swing. It’s centrepiece, of course, was the bullock cart race. We wondered whether these ought to be called races or speed trials. The carts do not all take the field at the same time. There is not enough width for that. The maximum at one go is two carts making the one-kilometre dash. That’s because there were two ‘tracks’ shaped out in the field by use over decades. Mostly, though, it was one cart, two bullocks, one driver at one time. 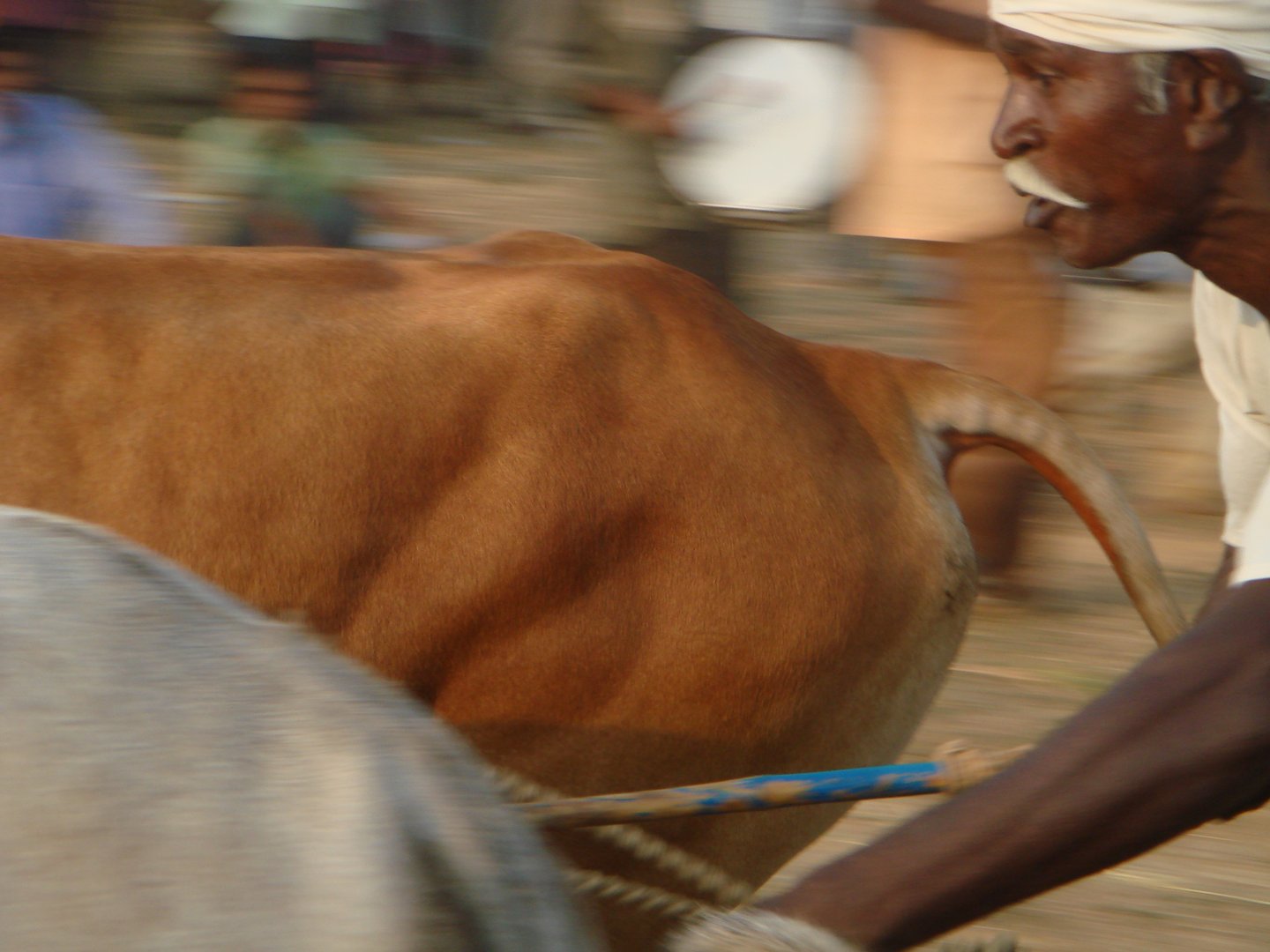 It’s different from other racing scenes as the spectators are everywhere, even in the middle of the tracks, some of them crossing the ruts with their backs to onrushing bullocks in the middle of a race. But there were no mishaps. The audience yells its lungs out to alert the miscreant who leaps out of the way like a startled stuntman. The cart racer does not slow down a whit. Though there are groups of youth dangerously close to the tracks, ostensibly to cheer their heroes on. The less boisterous sections of the audience maintain a safe distance, some perched on top of regular carts piled high with straw. That’s the dress circle and balcony. Still others potter through the carnival, buying goods but breaking off when the roar of a race beckons them. 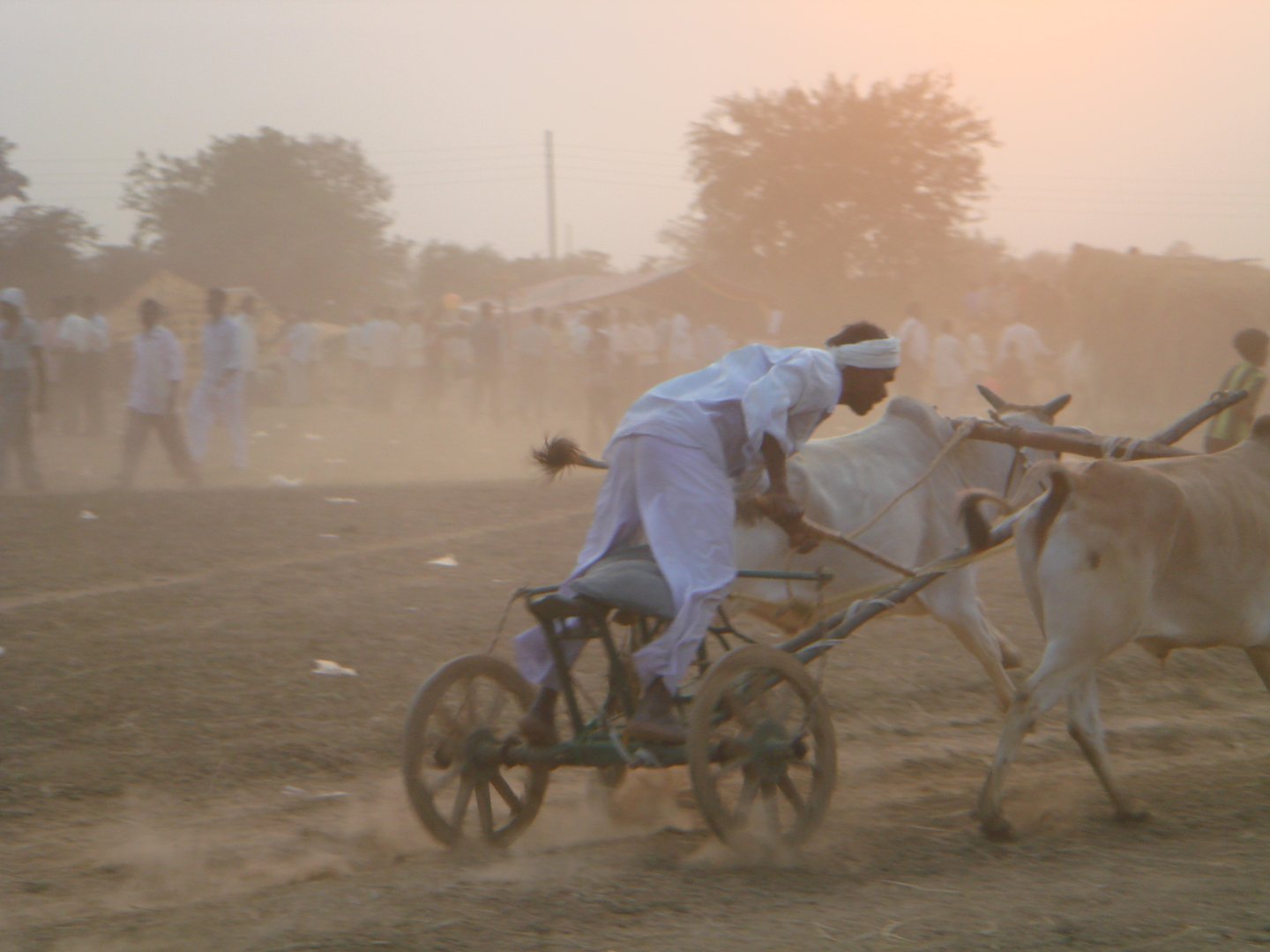 These are not your everyday bullock carts but, as bullock carts go, snazzy racers. Much smaller, sleeker, relatively lightweight and capable of surprising speed. The racers are all experienced farmers of varying age and size. One was surely close to 60, if not past it. But age is no bar. The bar is on racing itself. So there are no official ‘prizes’ though some say token ‘gifts’ are handed out. The racers are in it for the prestige. 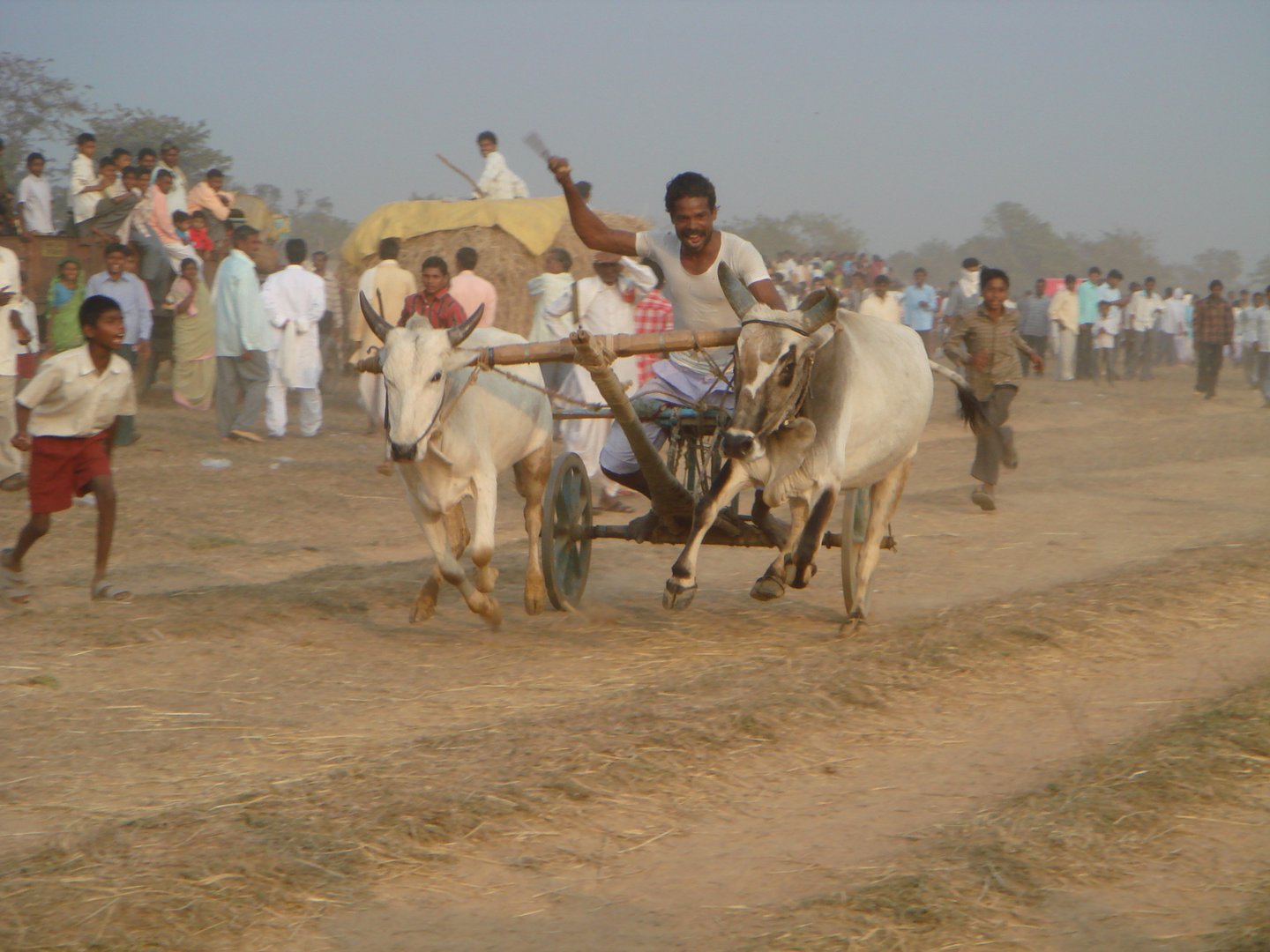 They were getting ready as we entered the field. Checking their carts, tending their animals. Some cattle were decked out in finery, but that was for other functions. The racing bullocks are a no-frills lot, pumped up and snorting on the sidelines. Drummers announce the start. Drummers also march back to the start line after a race. While the racer’s empty cart returns, minus bullocks, pulled along often by his small sons. 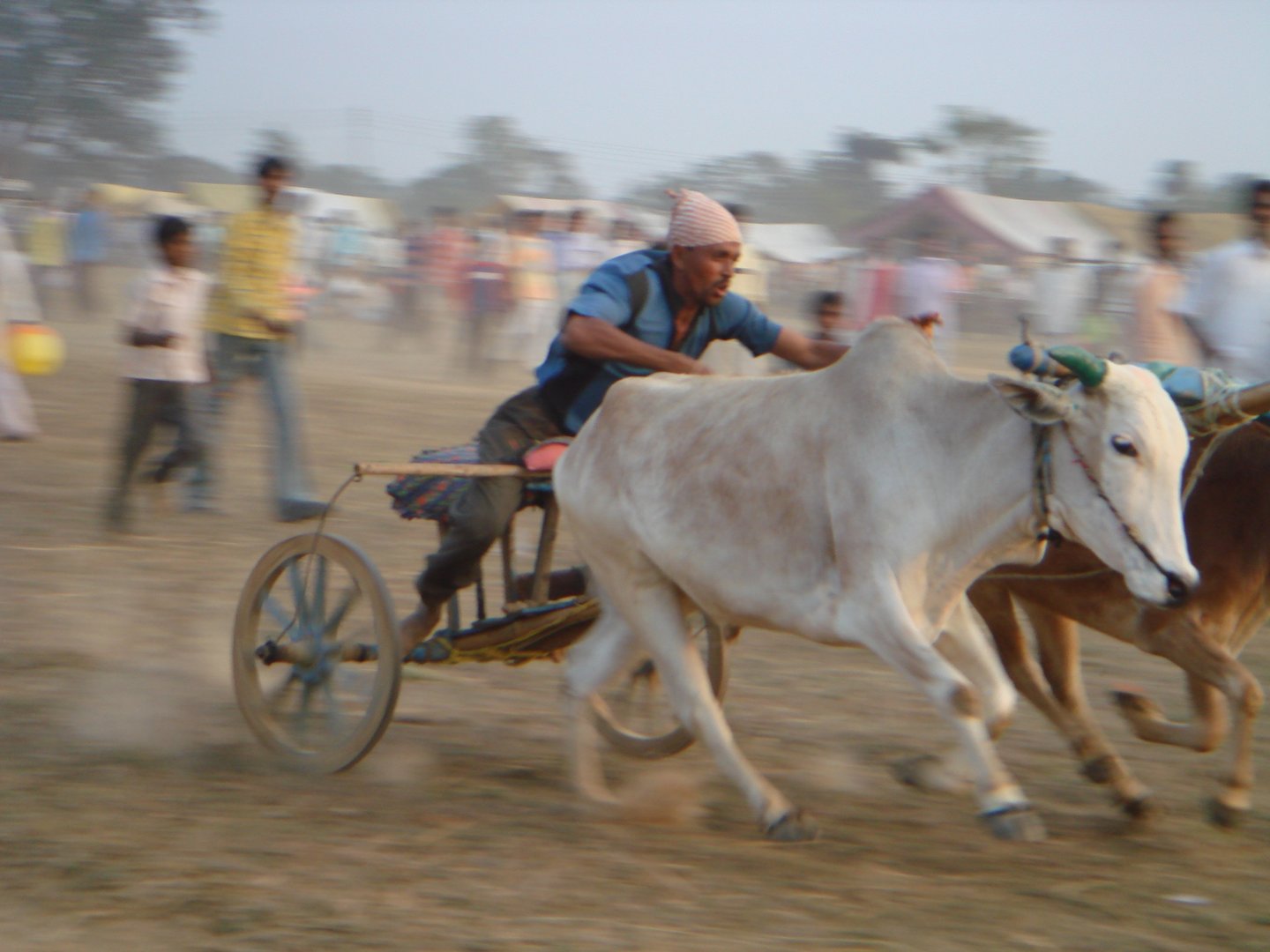 Note the small, light, snazzy racing cart which enables the racer to move much faster as he enters the final stretch of the track

The roar went up and a race cart whizzed by, if bullock carts can whiz. I think this one did. It surprised us with its speed. The racer, one hand grasping a tail like a rudder, the other wielding a stick more for his own balance at that point than anything else, shot past. It was hard to say who was in control, man or animal. The audience applauded. A cloud of dust covered our cameras. The drunk made rude remarks about our incompetence. The ‘security’ team aiming to clear the track of people, stood in the middle of it giving us meaningful glances. What about us, they said. So we photographed them too. 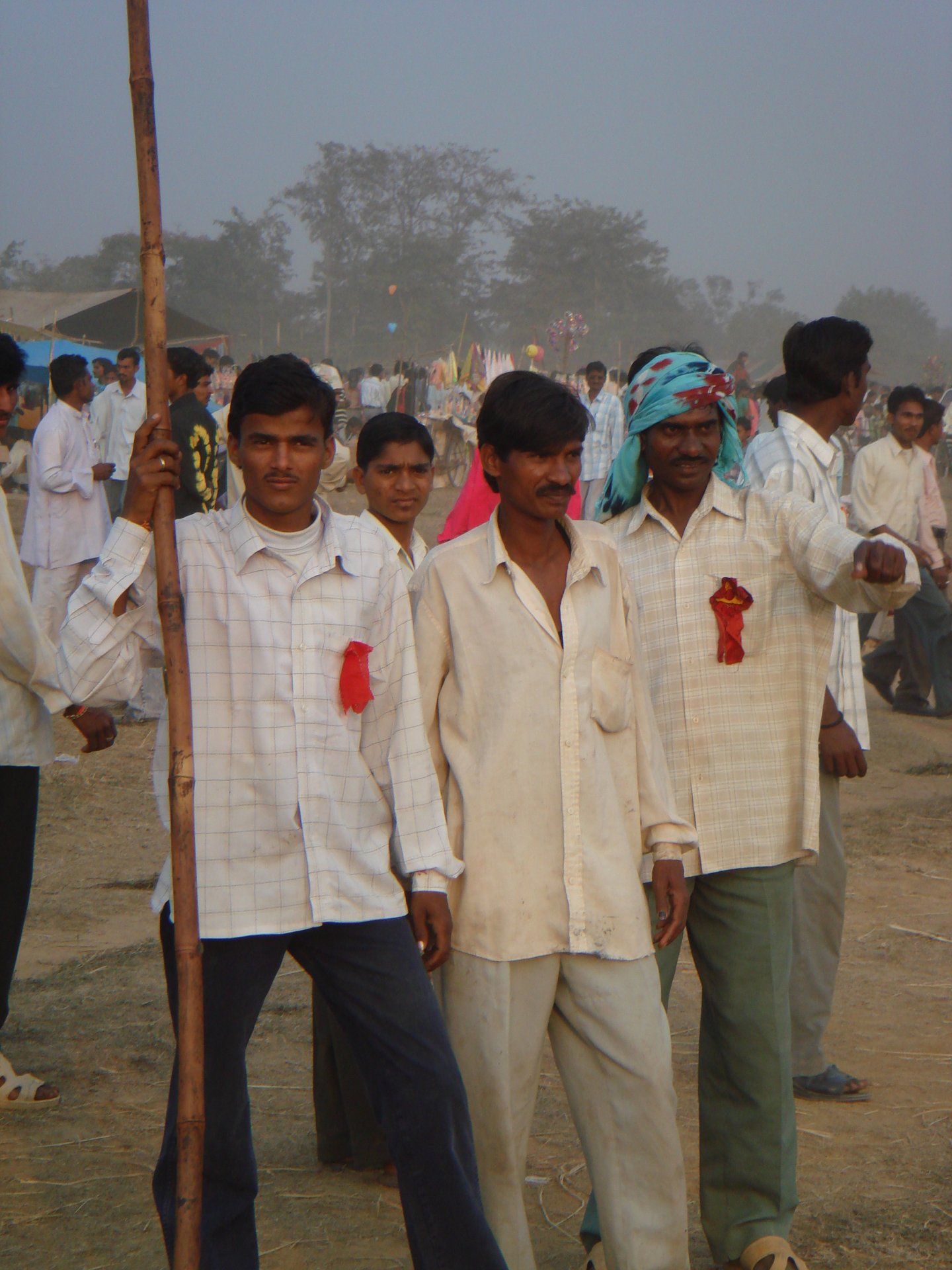 Meanwhile, a huge yell alerted us to the fact that the next racer was now metres away bearing down on us at some speed. We, security team and all, scattered out of harm’s way in panic but in time, and the cart sped past. The rider at full stretch, giving it his all. The crowd closed in. The security team rid the tracks of intruders, only to stand again in the middle of it, posing for us. 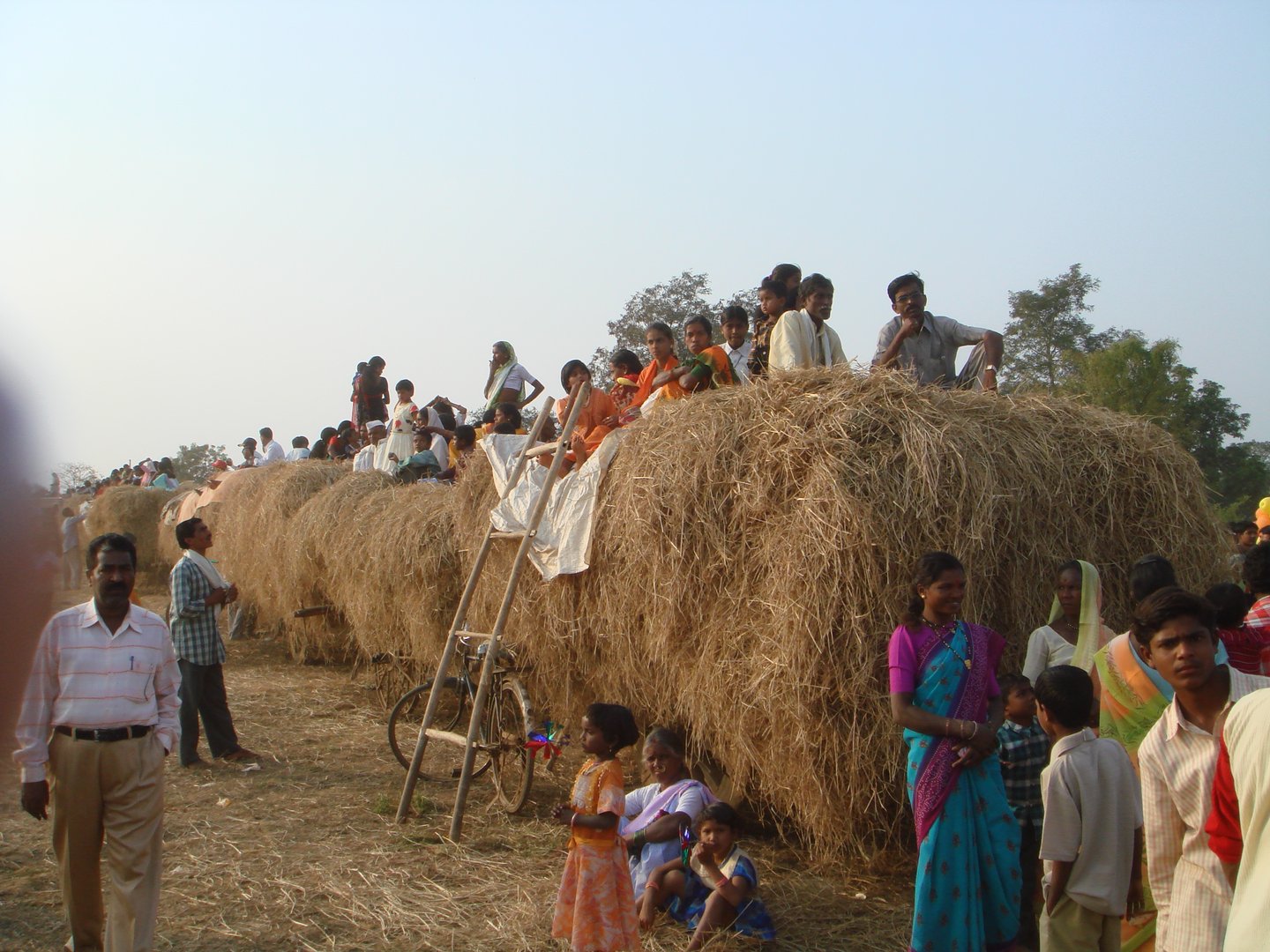 The 'dress circle' and 'balcony' seats of this open-air tournament: straw piled atop large carts

The next race was critical, the racer superb. This was the farmer closer to 60. Emboldened by the easy attitude of the crowd, I stood up pretty near this time, wanting to get the man’s face clear and close. That’s when the drunk did his bit. With all the noise on, I failed to see him hunching down just behind my knees. I took a small step back and nearly fell over the drunk. Lunging forward to avert that meant I was millimetres away from the cart and could feel the breath of the animals. And yes, I did see the face of the racer up close, far more than I had ever wanted to. 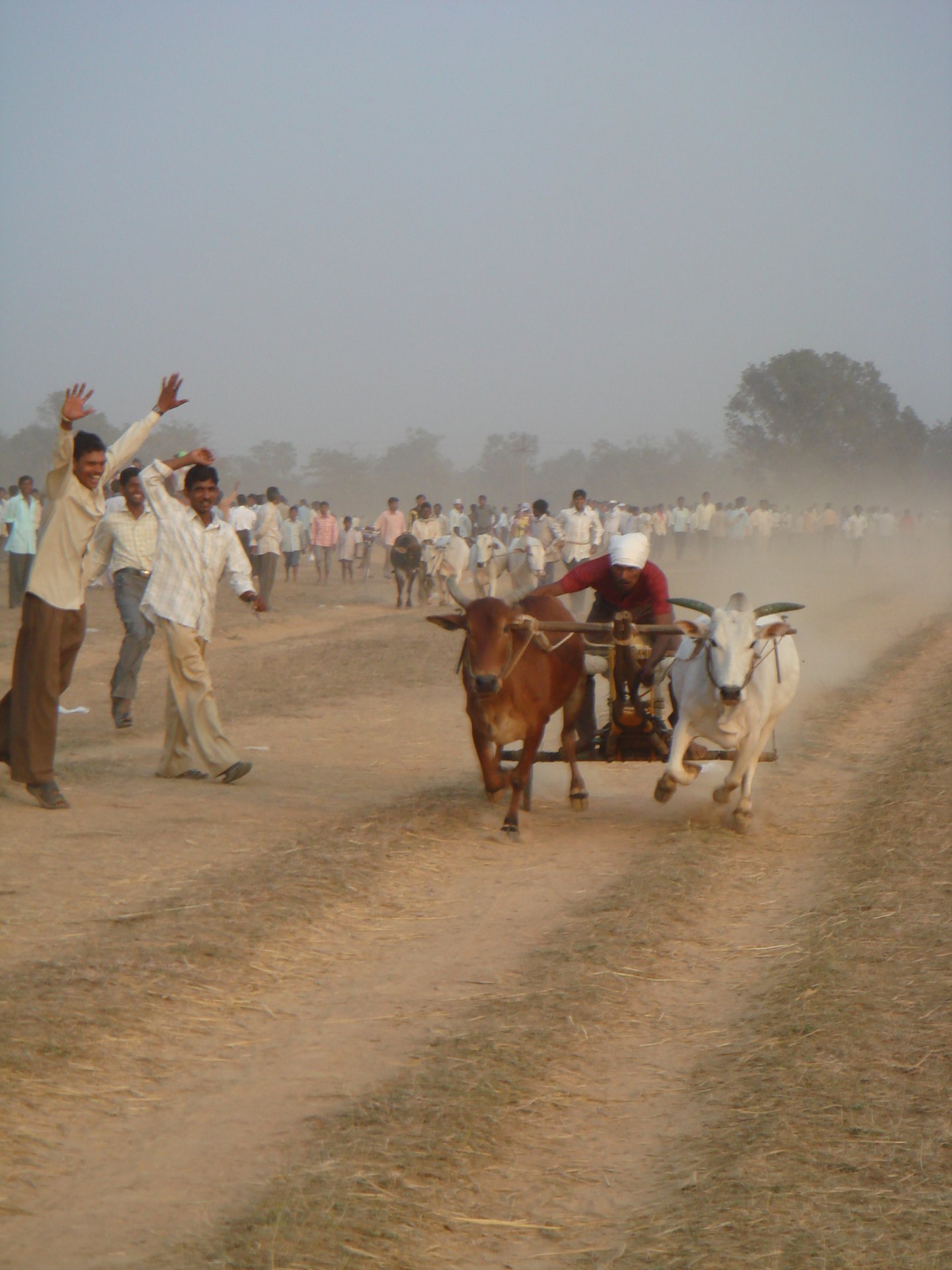 Crouching low as he thunders into the last few yards, he's egged on by excited spectators and supporters

The crowd generously gave everybody a cheer. The drunk looked at me with injured innocence. I looked at him with feelings the editor of Frontline will not print. The racer was a puff of dust on the horizon. It took some moments to sink in: I had come close to being one of the few humans ever run over and killed by a bullock cart. In a race. Even as I had pulled away from the line of the cart, the wheel on my side touched the edge of my canvas shoe. The last two shots were more accidental than intended. 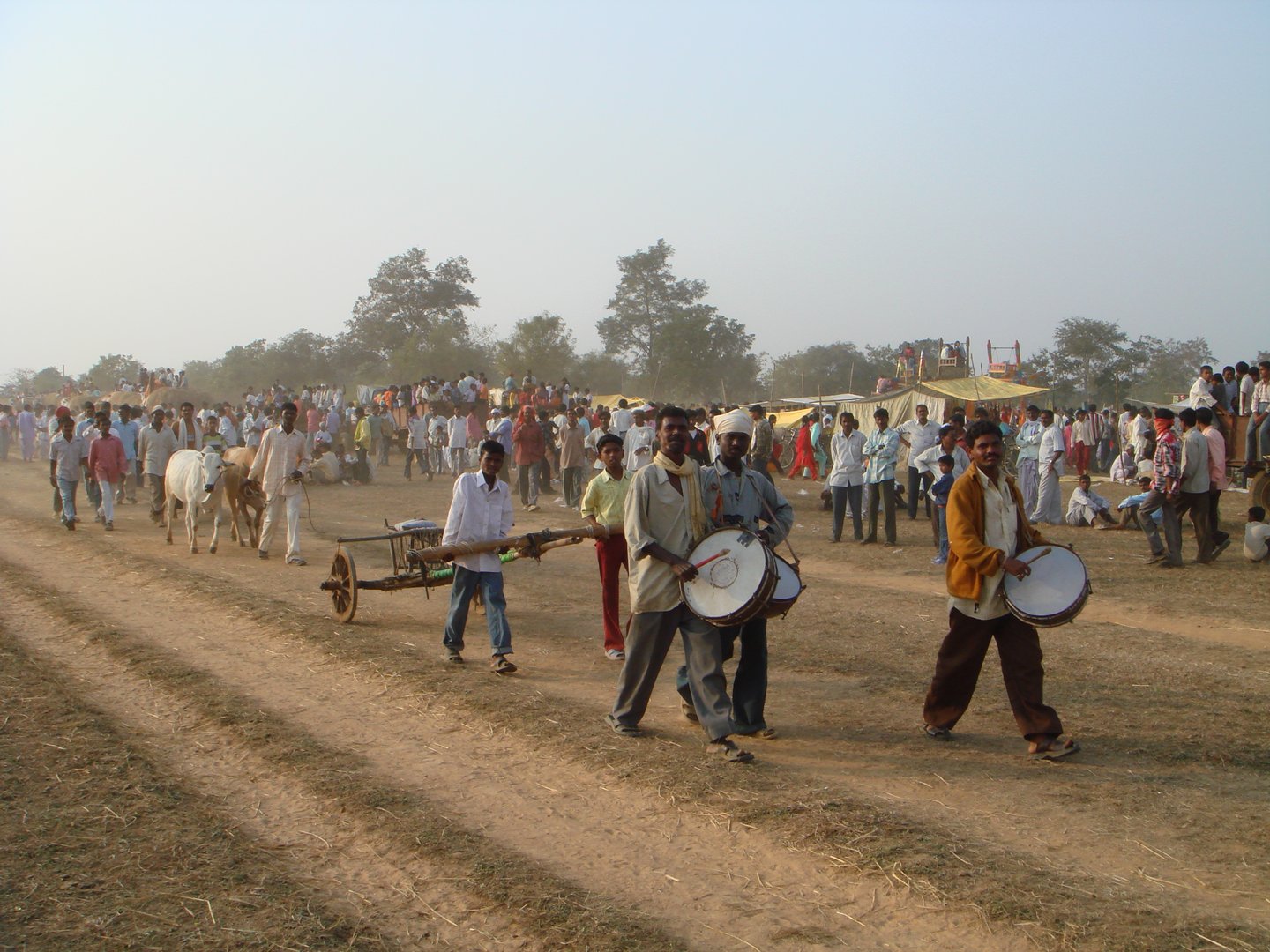 Drummers march along the track to announce the commencement of the next race. They also march back to the start line after the race is over

Then there were a couple of racers who lost control. Apparently, this happens when the stronger of the animals has independent ideas about the route it wants to take. And when the rider is unable to quell the rebellion. One swerved off the track and nearly smashed into the straw-piled carts atop which sat an eager, now alarmed, audience. Another careered off the other track into the crowd and needed help to stop. 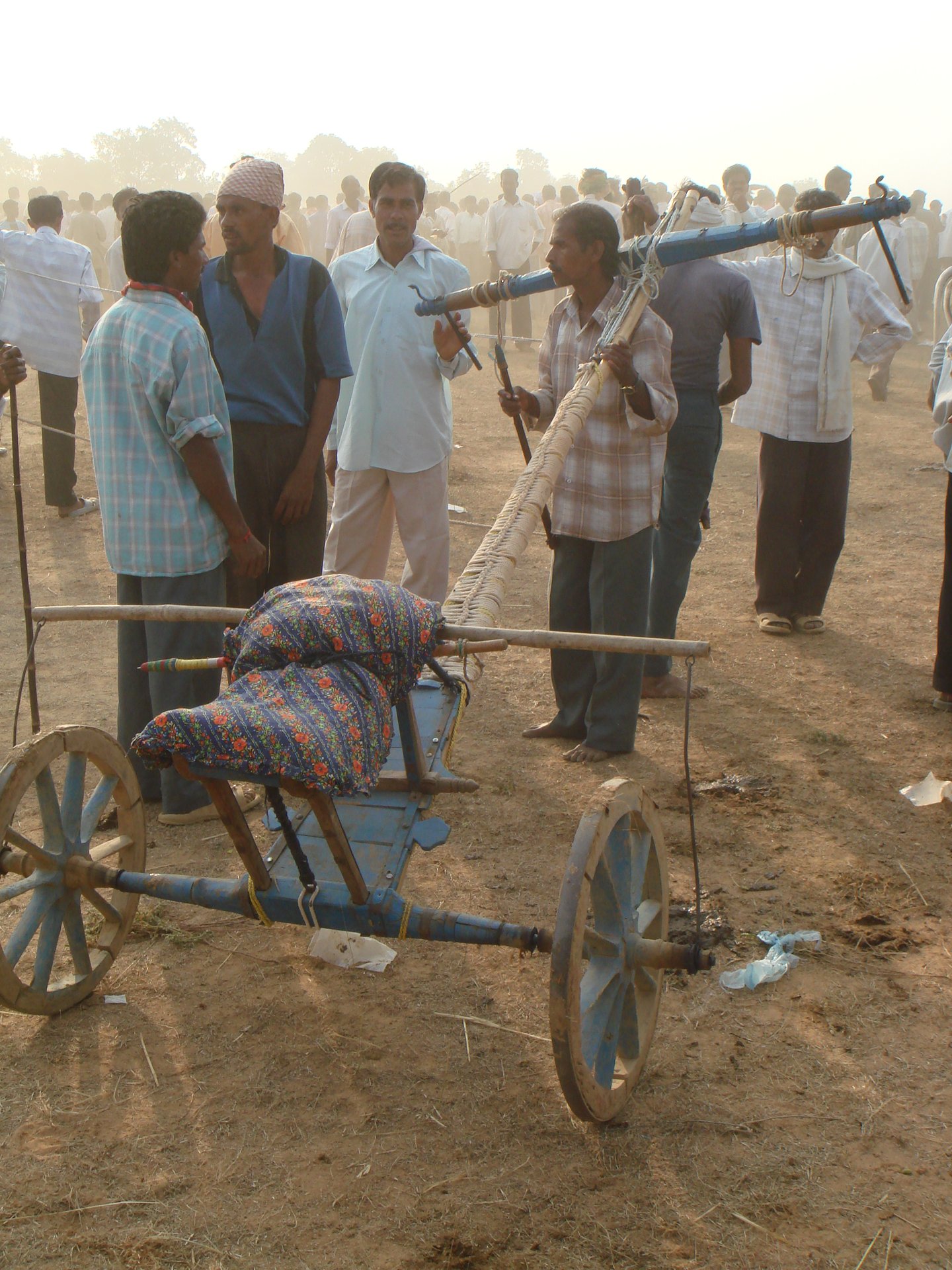 The ‘bullock carts’ they race are really sleek chariot-type contrivances. Here's one being readied for a race

Meanwhile, the vendors, the makeshift stalls, the trinket traders and the sellers of magic potions did a brisk trade. The racers untied the animals from their carts. The drunk staggered off into the sunset. And we too, headed for the exit with much of the crowd. The carnival was over. 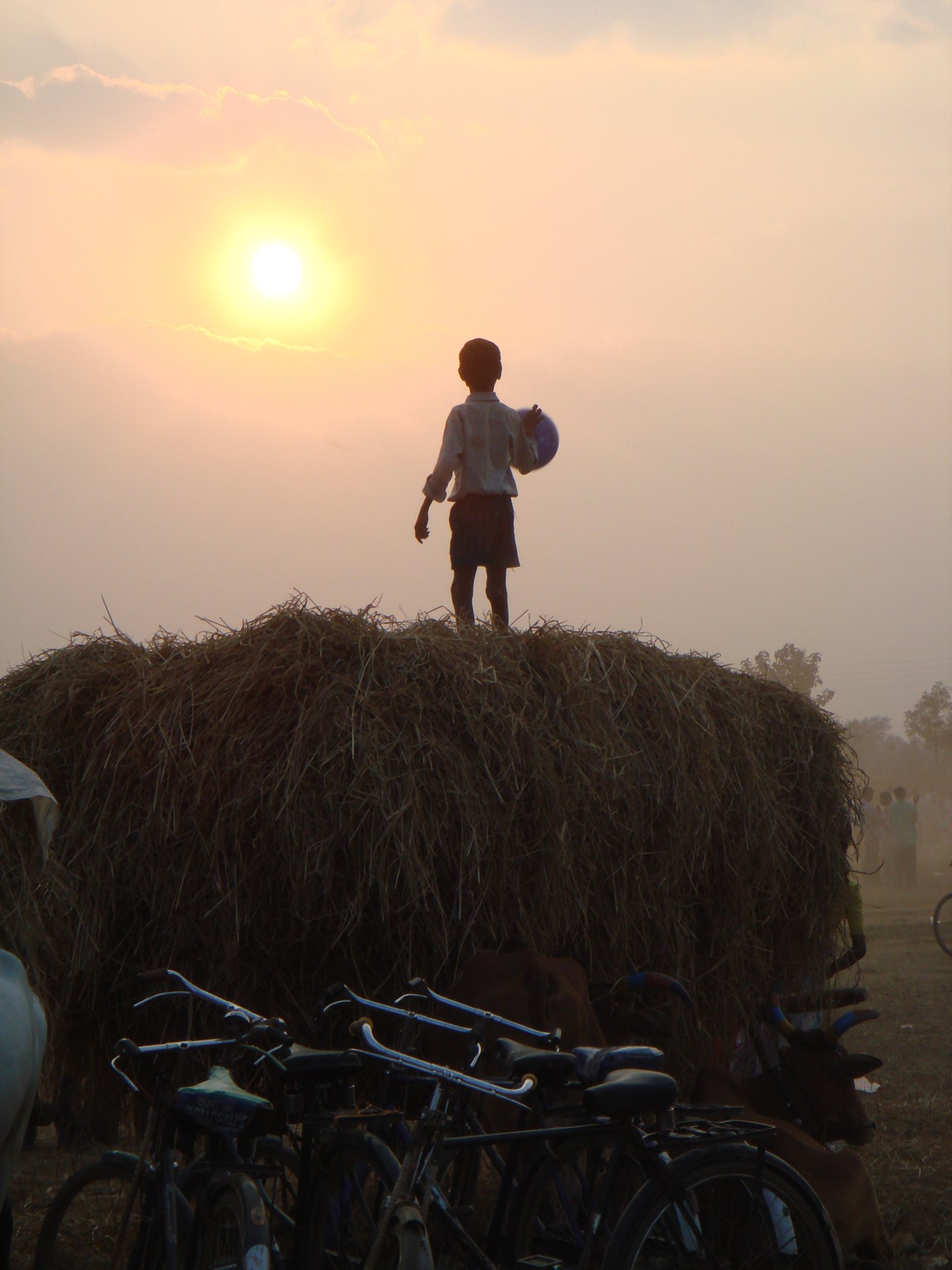