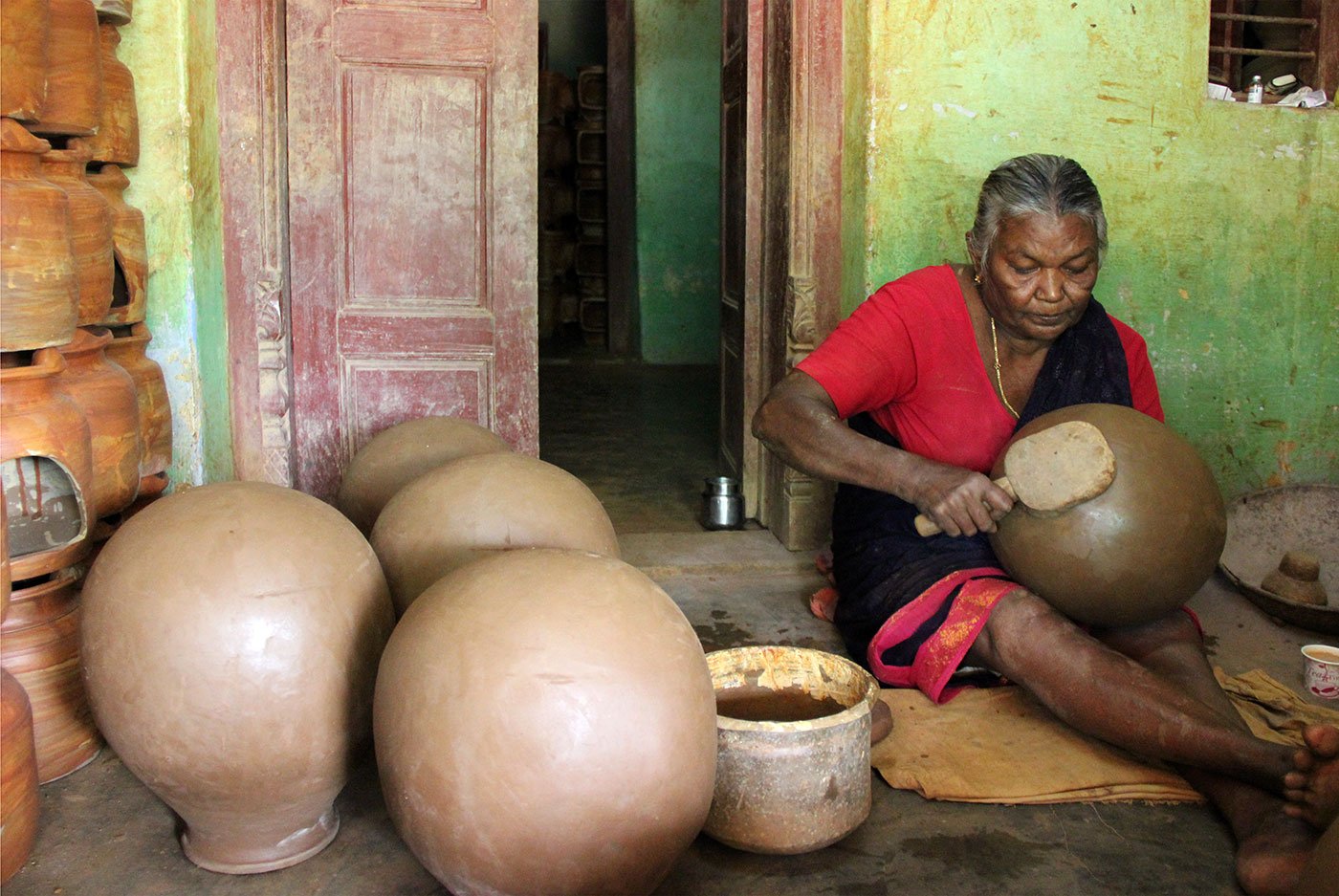 When Meenakshi beats a pot 3000 times

“You have to beat it 3,000 times,” says Meenakshi. And sets about doing just that. 'It' is an unfired clay pot that looks like any others used in cooking. This one, though, she will shape into an earthenware percussion instrument. Placing it on her lap, she starts slapping the sides with a big wooden spatula. When fully finished, the pot will be a ghatam , a high-quality musical instrument commonly used in south Indian Carnatic concerts. Meenakshi Kesavan is an expert ghatam maker. The 63-year-old and her family could be the only ones producing the unique type she specialises in – the manamadurai.

An hour’s drive from Madurai, Tamil Nadu, Meenakshi’s hometown Manamadurai is famous for its ghatams . At age 15, she says, “I got married into a family where at least four generations have made this instrument.” She learnt the craft from her husband and father-in-law. “It takes six years to master,” says her son Ramesh. And that’s on the fast track. “It takes longer if you’re not a traditional potter.”

“The tricky part is tempering the ghatam to improve the tone,” Meenakshi explains, whacking the sides with her right hand. With her left, she rotates a round stone inside the pot. “That’s to see the wall does not collapse. And to make it smooth,” she says, pausing for a brief rest. After four decades of moulding mud, her hands hurt all the time. She explains how the pain shoots down from her exhausted shoulders to her fingertips. But a minute later, picks up the wood and stone and adjusts the pot on her lap. The beating resumes.

Meenakshi beating a ghatam (left); she holds up the round stone used inside the pot to smoothen the walls (right)

We were in Manamadurai to meet ‘the potter who got an award’, as she is fondly called. It turned out to be one from the prestigious Sangeet Natak Akademi. A large gilt-framed photograph shows Meenakshi receiving it from the president of India. It’s hung high on the living room wall alongside a garlanded portrait of her late husband. Ramesh recalls the family’s memorable trip to Delhi. “It was my mother’s first flight. She was both excited and frightened.” On April 11, 2014, “we were taken to Rashtrapati Bhavan in an air-conditioned bus. That evening, she became possibly the first instrument-maker in the country to receive the prize.”

A skilled craftsman himself, Ramesh is proud of his mother’s work. He shows us the Akademi booklet lauding Meenakshi as “perhaps the only ghatam maker who has the entire know-how for quality ghatams .” It adds that “hundreds of ghatams made by her have travelled with performers all over the world.”

The mud for each instrument also travels some distance. “We collect it from five or six ponds,” Ramesh explains. It’s dried for a day and then mixed with fine sand from the Vaigai river. “We add graphite and lead to improve the tone, stamp on it for six hours and keep it aside for two days. When the clay is stronger, we cast the pot.”

Ramesh makes it seem effortless. He sits in front of the electric wheel, pats a lump of clay and places it on the centre. As it turns, he quickly draws up the clay and shapes it with his hands. When ready, the pot is ‘finished’ by beating its sides. (At this point, the raw clay pots that Meenakshi works with weigh a whopping 16 kilograms each). For the next couple of weeks, the ghatams are dried in the shade and then warmed for four hours under a fierce sun. Finally, the family applies yellow and red polish to the pots and fire them in the community kiln for 12 hours. They shed half their weight when baked. The result is eight kilograms of mud that make a beautiful music.

Ghatam- making has seen many changes over the years. The pots now tend to be as players prefer them – lighter, smaller, more elegant. “They’re easier to carry about,” Ramesh points out. Manamadurai ghatams are still the heaviest variety. They weigh thrice as much as a cooking pot, and are at least twice as thick. Chennai and Bengaluru produce lighter, thinner ones.

Technique apart, the clay from the Manamadurai region deserves some credit for the excellent clarity. Sadly, the best soil now goes into making bricks, affecting the potters’ livelihood. Yet, Ramesh is happy to teach his daughters, nephew and niece – the family’s fifth generation – to make ghatams . It isn’t the money. Ghatams fetch them “a mere 600 rupees a piece.” Compare this with a small, luxury-brand, bone-china bowl – that costs a few thousands.

Ramesh turns the electric wheel (left); draws up the clay and shapes it (right)

Yet, keen to preserve their 160-year-old legacy, the family keeps at it. “When I was 10, an American journalist visited our house,” says Ramesh. “Shocked at how little we earned, she offered to send me and my sisters to a convent school in Ooty. My father refused. He wanted us to learn pottery.” Young Ramesh was taught by his 90-year-old grandfather who “continued working until a couple of days before he died.” Meenakshi chips in to say that her father-in-law had lived long because he never allowed anybody to photograph him. I put away my camera guiltily.

She accepts the poor returns, seeing her work simply as service to music. For long an accompanying instrument, solo ghatam recitals are now not uncommon. She has attended a couple in which her ghatams were played. Ramesh tells me the details. His mother is not very chatty. Interviews with her after the Akademi award noted she was reluctant to speak about herself. “The first long interview she gave was on All India Radio last year. She even spoke about the kozhambu [gravy] that my father liked,” Ramesh laughs.

The little she tells me is about business. Ghatams are not their mainstay. Their regular income is from a wide selection of earthenware, including pots to brew Siddha medicine. In a full year, Meenakshi, Ramesh, his wife Mohana, and his sister K. Parameshwari, along with a few helpers, make about 400 ghatams . Just over half of these can be sold, the rest fail the tone test. That can be done only after the pots are fired. Sometimes, the best-looking ones are unfit for music. 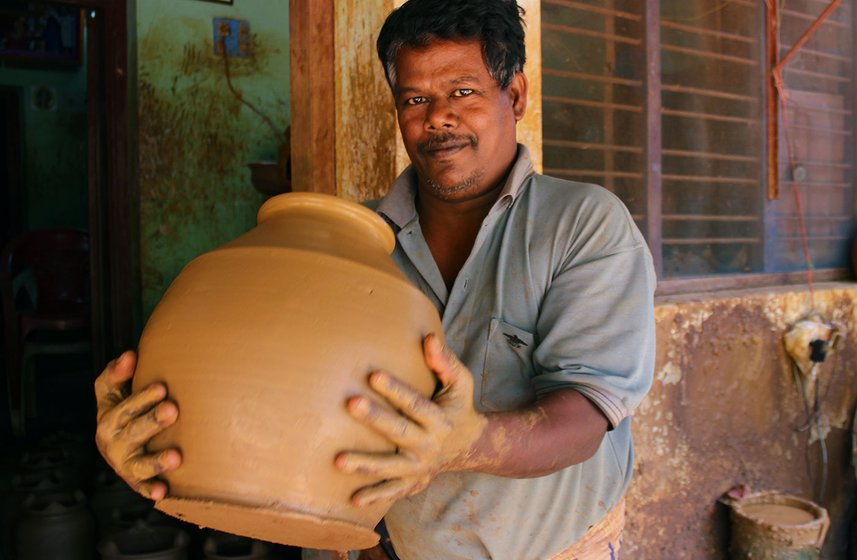 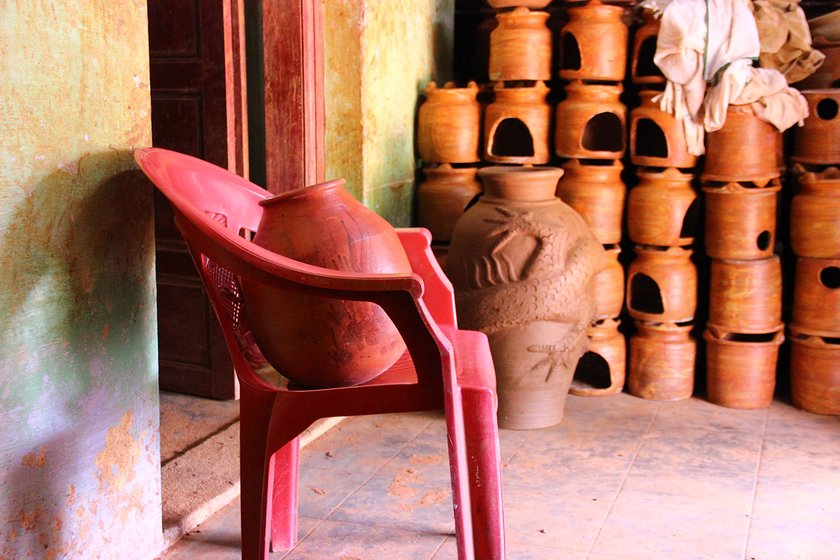 Left: Ramesh lifts the raw clay plot from the wheel and carries it indoors. Right: The house is stacked high with terracotta; only the ghatam is seated on a plastic chair

“There is no financial help in this business. Governments do not patronise the craft. And unlike players, we are not encouraged with awards,” rues Ramesh. But he’s proud that, despite the odds, his family provides a livelihood for several people.

The day we visit, the workforce is out in the drizzly yard, moving the half-dried pots indoors. The rooms are stacked high with terracotta. The sky, sulky and rumbling, promises a wet afternoon. Monsoon is a wretched season, they grumble. His work disrupted, Ramesh moodily plays a ghatam . His feet and hands are the colour of sandalwood, freshly smeared with clay. He taps his fingers near the pot’s mouth, producing a sharp, metallic sound. “I’m not formally trained,” he says, but clearly has a terrific ear for rhythm.

Many percussion instruments use animal skins. “Only ghatams are created from the five elements.” There’s clay from the earth, the sun and air to dry it. Water shapes it, and fire bakes it. Ramesh does not mention human labour. He doesn’t have to. Because from inside the corridor, all we hear is Meenakshi beating a ghatam until its sides are smooth and its pitch, perfect.