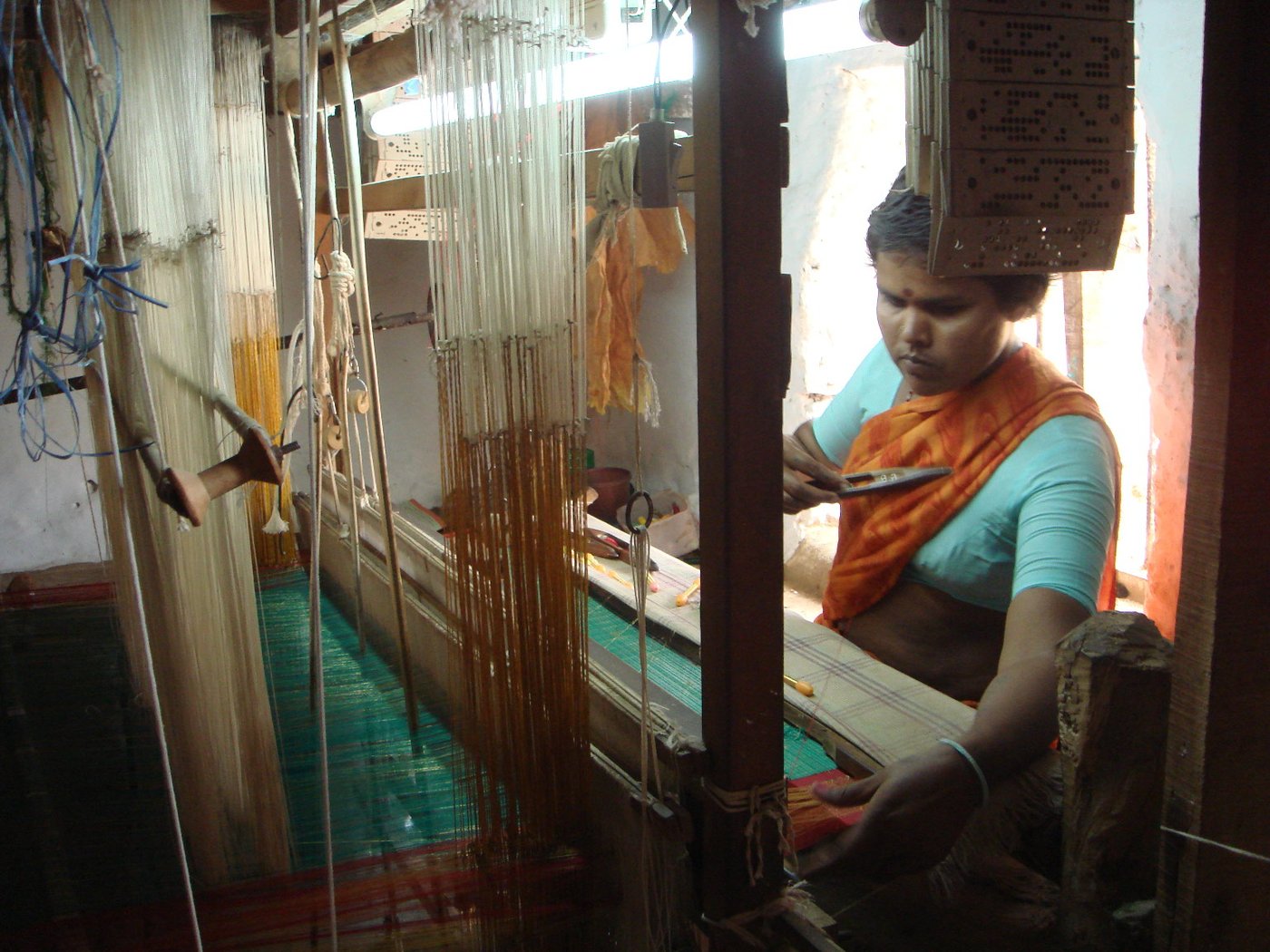 From the PARI files: Anantapur district has been among the worst-hit by farm suicides in the country, and women who lost their husbands have struggled against huge odds to give a future at least to their children

You can find her working the maggam (weaving loom) at 4 a.m. With two children – her own –going at it on another loom beside her. “It all depends on when the electricity comes,” she smiles, apologetically. “We have to put in so many hours each day to be able to finish these sarees on time. You can see how dark it gets in here.”

“In here” is a space not much more than nine feet by eight feet, and home to two looms, Krishnamma and her two children. The looms, which take up most of the room, were installed there by merchants who have left the raw material with her and who will collect the product when it is ready. Beautiful woven sarees that Krishnamma and her daughter Amita are unlikely to ever wear. They will get Rs. 600 per saree they finish. With son Pulanna pitching in as well, they can “make up to two in a month. That’s how much work we get just now.” And they do it to an unpredictable schedule, marked by blackouts, breakdowns and occasional bouts of electricity. That’s life in Subrayanapalli village in Anantapur district. 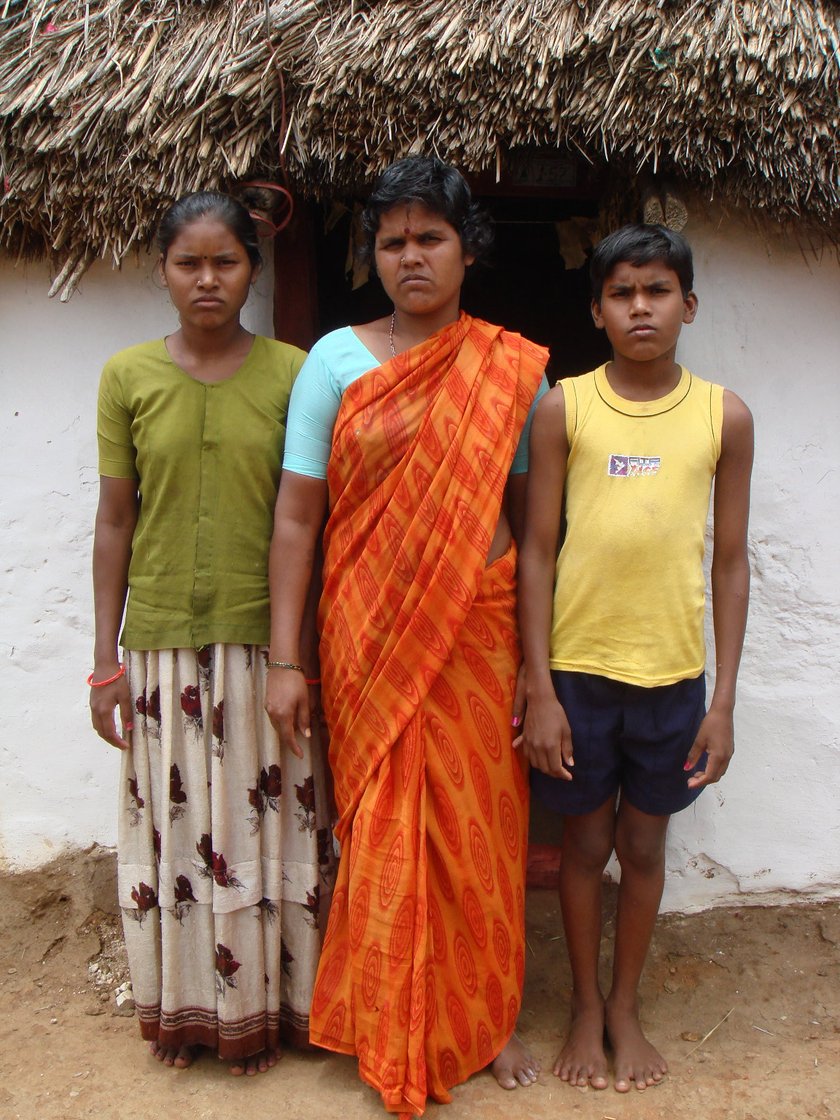 Krishnamma and her two children, Amita and Pulanna, at their home in Anantapur

“That’s why, when the current does come, we have to work no matter what time it is,” Krishnamma explains. And she has to do it while helping the young ones on the other loom. That’s besides doing the washing, cleaning and cooking. Sometimes she gets other work but her labour fetches no more than Rs. 25 a day. “Some weaving, I learned as a girl,” she says. Meanwhile, her legs are swollen with standing so many hours at the loom and also trying to make the work lighter and easier for the children. Both have dropped out from school. Pulanna, at 14, from a school four kilometres away. And Amita, 15, who misses school deeply but won’t admit it because of loyalty to her mother.

Krishnamma is one of more than 100,000 women who have lost their husbands to farm suicides across the country in the past 14 years. Anantapur was one of the worst-hit districts in the flood of farmers’ suicides. Her husband Nethi Sreenivasulu hanged himself in 2005 after all the four borewells he set up on his three-and-a-half acres at a cost of Rs. 60,000, failed. “The creditors have come and asked me to pay up,” says Krishnamma. “I could not. Where’s the money?” There’s none from the government, for sure. “No, I never got any compensation after his death,” she says. Krishnamma has no faith in agriculture. “We have lost too much, too many years.” She’s too busy for regret or recrimination, anyway. There’s a family to be fed and she will do that at any cost to herself.

In Chinna Musturu village, Parvati Mallappa has begun setting up her tailoring school. This extraordinary woman counselled her husband against suicide in 2003. She pointed out to him that the whole village was in the same state of debt and despair and urged him not to give in to creditor pressure. Duggala Mallappa killed himself anyway. Parvati decided not to go back to her mother’s village in Bellary, Karnataka. She stayed on, determined to educate her three daughters Bindu, Vidy, and Divya who are just four, seven, and nine years old now. Parvati herself is one of the most educated women in her village, having passed Class 10. 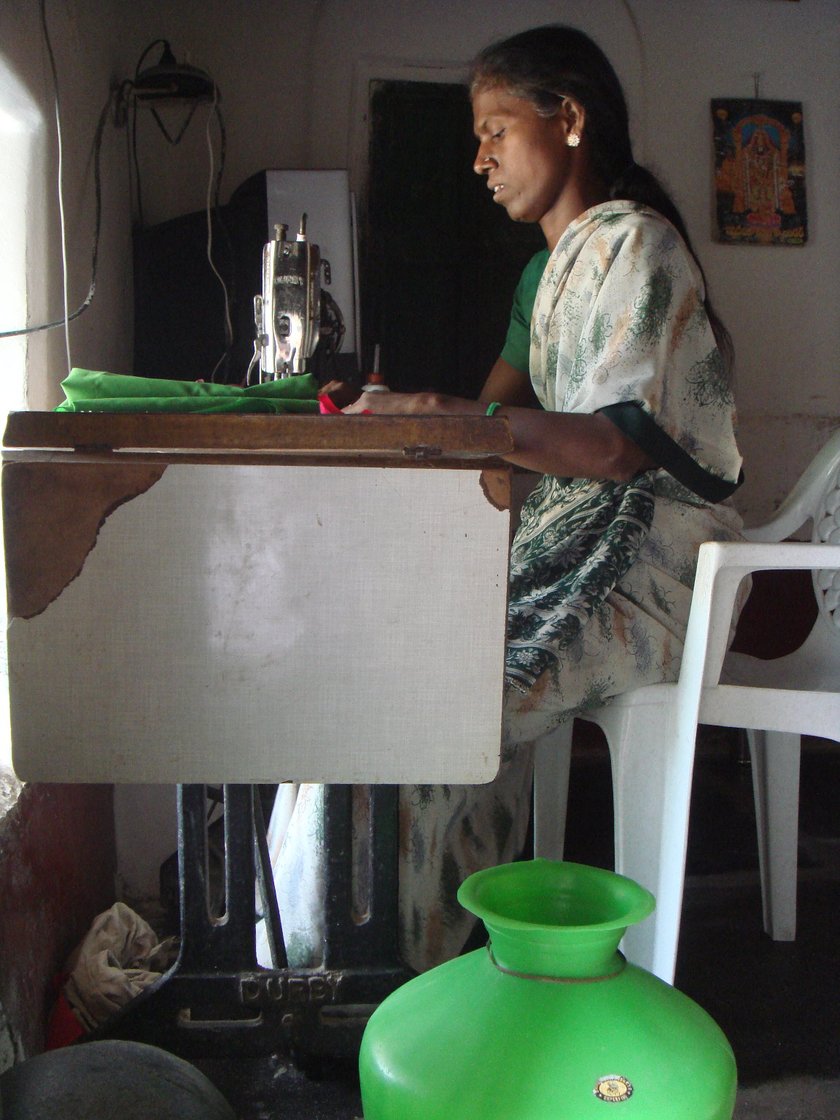 She leased out their 12 acres for a pittance and decided to teach herself tailoring. “I did some sewing as a child,” she says. “I felt I could make this work.” She did. It has been almost like serf labour and she needed to pay off Mallappa’s debts as well. That too, she did, using some of the compensation money she got, and selling off their cattle and other assets. All the while living alone with three very young girls she has to protect and raise. The two older girls are doing well at school. One recently scored 49 on 50 in a science test. And educating them to “any level they want to go” is Parvati’s goal.

Why tailoring? She’s studied her village and worked it out. “We have some 800 families around here. Almost everyone has a girl. So while it is true that I make very little money from the stitching work I get, it is also true that there is scope for teaching sewing here. Even if 10 per cent of those families want their girls to learn sewing, I will have more students than I can handle.” And so, with some help, she’s equipped herself with two more sewing machines and is all set to launch her “school.” She says, “I can get more work done when these girls are away at school. Once they’re home, it gets chaotic.”

“Her courage is amazing,” says Malla Reddy, director of the Ecology Centre of the Rural Development Trust in Anantapur. A body he is associated with is helping with the girls’ education. “To stay there alone with three little girls and face up to the challenges is not easy. But she’s done it. She has a clear-headed view of her tasks. And she sees her future in the children. They are her motivation.”

The same district has hundreds of Parvatis and Krishnammas, for whom the odds have proved too much. Several have sold off land and cattle to pay debts, but are still not clear of them. Many have seen their children drop out of school. Many more are doing back-breaking labour, often for less than what they would earn if they found work on the National Rural Employment Guarantee programme. Like their counterparts in other regions hit by the agrarian crisis, these suicide-hit households see growing hunger and hardship. Some have seen a second suicide driven by the same distress that caused the first. More than 100,000 of them nationwide still fight for survival so that the next generation might do better. As Parvati Mallappa puts it: “It’s all for the children, sir. Our time has gone.”

A version of this article was originally published in The Hindu on June 26, 2007.