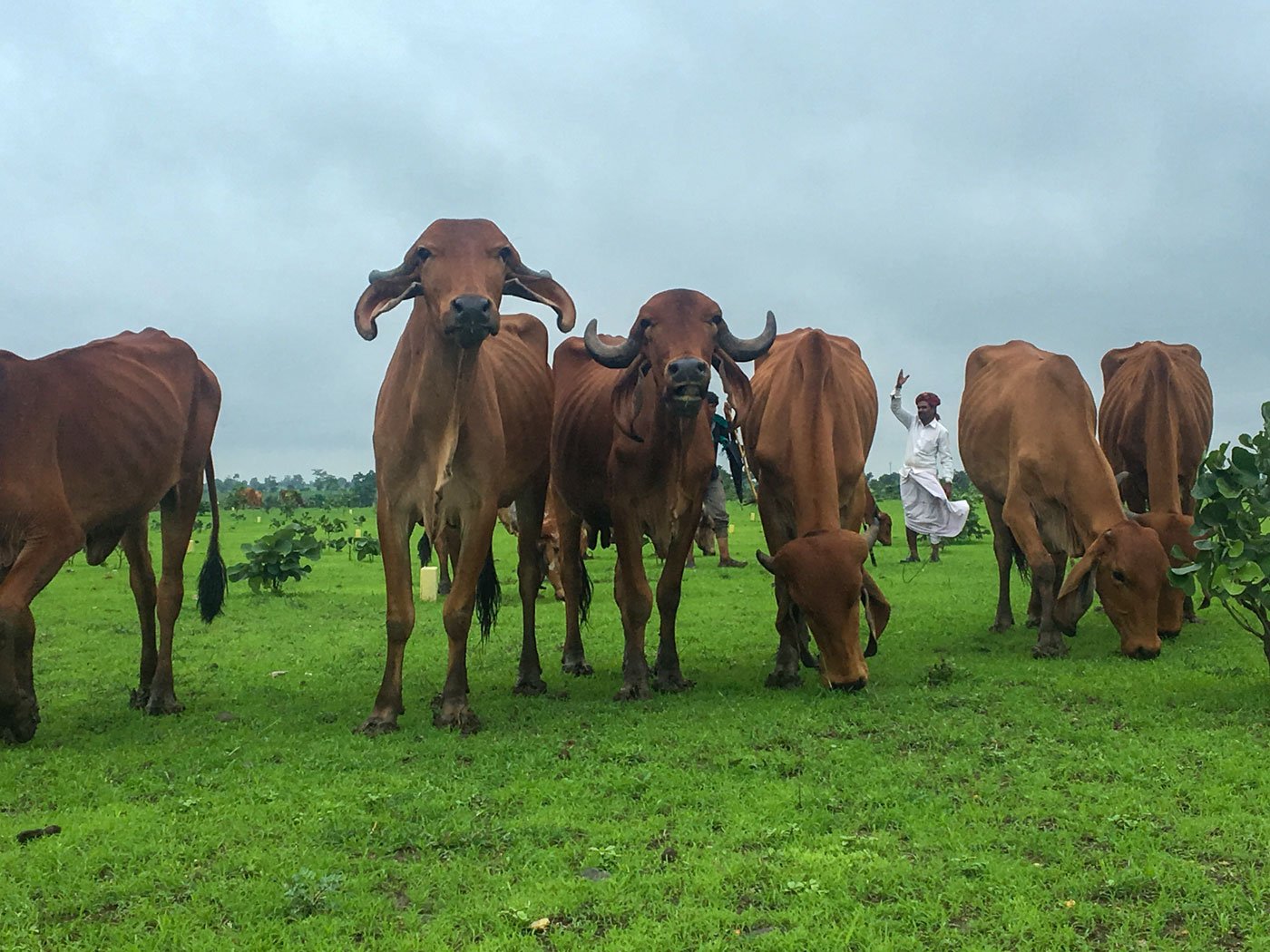 The Nanda Gaolis and other dairy farmers in eastern Maharashtra are facing losses from the drop in demand for milk and broken supply chains, besides grappling with animal health problems and fodder shortages

“I don’t know,” says Prafulla Kalokar, a 23-year-old dairy farmer in Wardha district, about whether the coronavirus will reach his village. “But its economic effects are already here.”

In Chandani, Prafulla’s village, the daily collection of 500 litres of milk has fallen to zero since the Covid-19 lockdown started on March 25, he says.. About 520 people live in the village located in Arvi taluka , and most of the families belong to the Nanda Gaoli community,

The Nanda Gaolis are a semi-pastoralist community, who live in 40-50 villages in Wardha district, around the Bor Tiger Reserve. Also known as Gawalis, they traditionally rear the Gaolao cow, a native breed, and are the major suppliers of cow milk, curd, butter, ghee and khoa in Wardha. “The Nanda Gaolis have seen a decline of at least 25,000 litres in milk sales,” says Kalokar, estimating the loss incurred by the community in Wardha within the first 15 days of the lockdown.

A huge drop in the demand for milk and milk products – all perishable commodities – has hit the dairy sector badly. Not only are families consuming less milk, with even hotels, eateries and sweet shops closed, the demand for dairy products has fallen further. The big dairies too, including Mother Dairy, a subsidiary of the National Dairy Development Board, have stopped procuring milk.

The financial loss, Kalokar says, will probably persist for a long time – it runs into thousands of rupees of daily income, he estimates, for everyone involved in the sector’s long supply chain. Prafulla is the only PhD candidate in his Nanda Gaoli community, studying the cotton economy of Wardha for his research degree at Nagpur University. 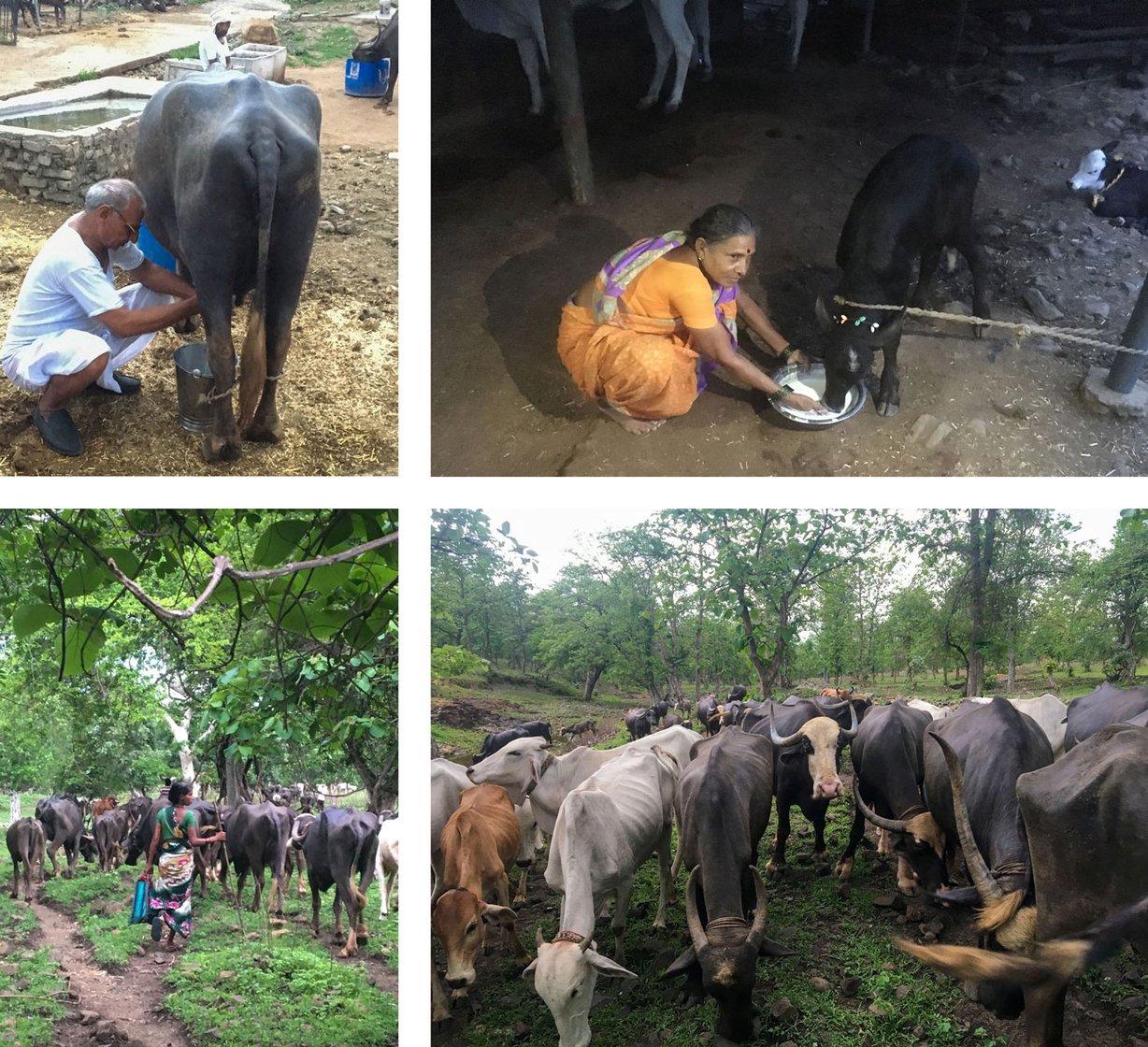 Nanda Gaolis live in 40-50 villages of Wardha, around the Bor Tiger Reserve. They rear the native Gaolao cow breed (top row), and are the major suppliers of milk and milk products in the district. The fall in demand during the lockdown has hit them hard (file photos)

The dairy sector sustains thousands of small and marginal milk farmers, traditional cattle keepers and pastoralists like the Nanda Gaolis. Many of them have for long been struggling in the shadow of agrarian distress in the Vidarbha region of eastern Maharashtra. They face an even more uncertain future now, when some will irrecoverably lose their only livelihood.

The problem goes well beyond the fall in milk sales. “We must milk our animals, otherwise they will develop clots and won’t be able to give milk in the future,” says Prafulla’s uncle, Pushparaj Kalokar. “But what should we do with so much of milk? We can’t make khoa or butter because the markets are closed.”

To handle the problem of surplus milk during the lockdown, and since most private customers have curtailed the amount of milk they procure, the Maha Vikas Aghadi government in Maharashtra decided, on March 30, to procure cow milk from producers through Mahanand, the state federation of cooperative dairies.

The government plans to purchase 10 lakh litres of cow milk every day for three months – April through June 2020 – and process it into milk powder. The procurement through Mahanand started on April 4 in Maharashtra. The state’s minister of animal husbandry, Sunil Kedar, told PARI: “We have allotted Rs. 187 crore for this contingency. If the central government contributes, we may increase the milk procurement.”

Other than Mahanand, many large cooperative dairies such as Gokul and Warana have also increased their procurement of milk – some of which will be processed into powder – so that the producers don't suffer. However, the problem remains for milk producers who are not linked to Mahanand, like the Nanda Gaolis in Wardha, because Mahanand has no operations in the district. Besides, the Nanda Gaolis have never been members of cooperative dairies or the large private dairies; they usually sell milk in the retail markets, which are now closed. 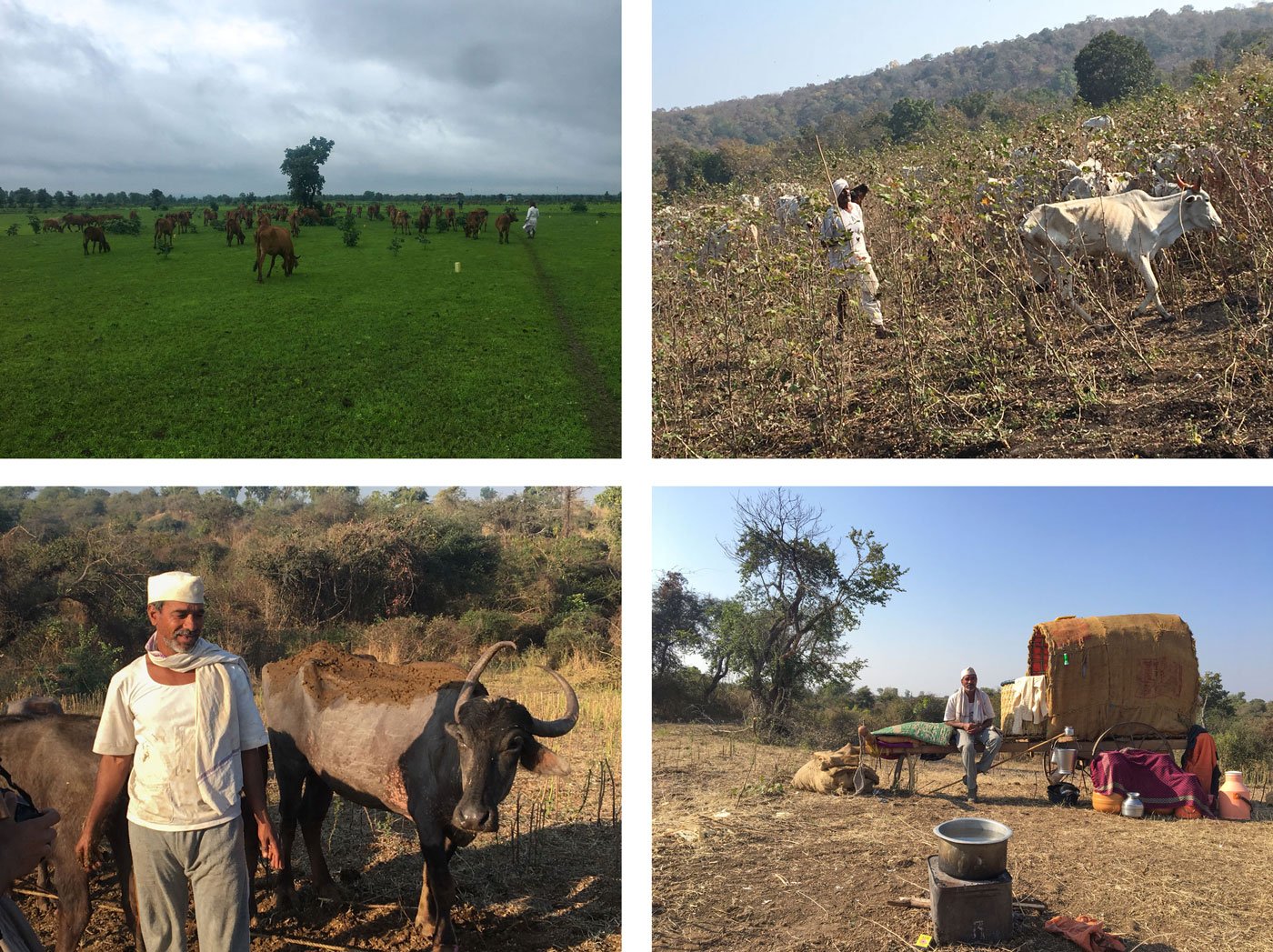 Top left: The Bharwads, who raise the Gir cow, have been forced to give away milk for free during the lockdown. Top right: A Mathura Lamhan pastoralist in Yavatmal. Bottom row: The Nanda Gaolis settled in the Melghat hills earn their livelihood from cows and buffaloes (file photos)

Unlike north and west Maharashtra, the Vidarbha region in east Maharashtra is not a major centre of milk production. But the region is home to many pastoralists, most of them cattle keepers whose main livelihood is dairy.

Among them are the Nanda Gaolis, listed as a Nomadic Tribe, who live in the plains in Wardha and are also settled in the hills of Melghat in Amravati district. Then there are the Bharwads, originally from Gujarat’s Kachchh region; the Golkars in Gadchiroli district, who breed buffaloes; and the Gowaris, who tend to cattle in villages scattered all over Vidarbha. The Mathura Lamhan, mostly confined to Umarkhed taluka of Yavatmal district, rear the Umarda cattle breed, known for its stout bulls.

The sheep- and goat-rearing Dhangar community in Akola, Buldana and Washim districts, and the Kurmars in Chandrapur and Gadchiroli districts, who are culturally similar to the Kurubas of Karnataka, also graze their livestock in Vidarbha. Some of the pastoralists are semi-nomadic, and they depend on grasslands and forests to feed their flock.

Since 2011, when the ban on grazing in the forest areas around Bor Tiger Reserve came into effect, Vidarbha’s pastoral communities have depended on grazing grounds and the post-harvest residue in farms, says Sajal Kulkarni. He is a Nagpur-based fellow at the Revitalising Rainfed Agriculture Network, studying pastoralism and working closely with pastoralists in Vidarbha.

The availability and supply of fodder has also been disrupted during the lockdown. Some of the Nanda Gaolis are stuck with their cattle in villages 30-40 kilometres away from their own. They had left before the lockdown to find grasslands or the remains of rabi crops in the fields.

The supply of fodder has also been disrupted during the lockdown. Some Nanda Gaolis are stuck with their cattle in villages 30-40 kilometres away from their own

Watch video: ‘We don’t have any money now. How do we buy feed for our animals?’

“Their income – from milk or meat – depends largely on the local markets and individual buyers,” says Kulkarni. “People from these communities are not being allowed entry into the villages for milk sales or to buy the cattle feed.”

Among those badly affected are the scattered settlements of the Bharwads, who raise the Gir cows. “These are very difficult times for us,” Ramjibhai Jograna, a community leader, tells me on the phone. “I’m living in the jungle with my cattle,” he says, referring to the shrub forests where his herds graze.

Jograna and a group of 20 Bharwad families live in a settlement on the outskirts of Sonkhamb village, about 45 kilometres from Nagpur city. Together, they produce 3,500 litres of milk every day, estimates Ramjibhai. The Bharwads don’t own lands traditionally, nor do they have any other source of income. During the lockdown, the group has been distributing milk free to villagers. But they’ve been forced to either throw away the rest or feed it to the calves. “There is no procurement from any dairy, or retail outlets, or sweet shops,” Ramjibhai says.

He was among the first in his community to purchase a piece of land and build a house there. He supplies milk to a Mother Dairy unit in his village, and also sells directly to customers in Nagpur. “That is not hampered, but it is a small part of our sales,” he says.

“We supply milk to private dairies such as the Dinshaw’s, and to Haldiram’s, and to the retail buyers such as hotels, tea vendors and sweet shops [in and around Nagpur],” says Ramjibhai. 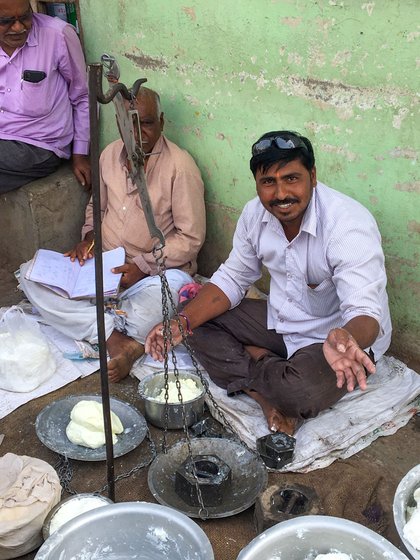 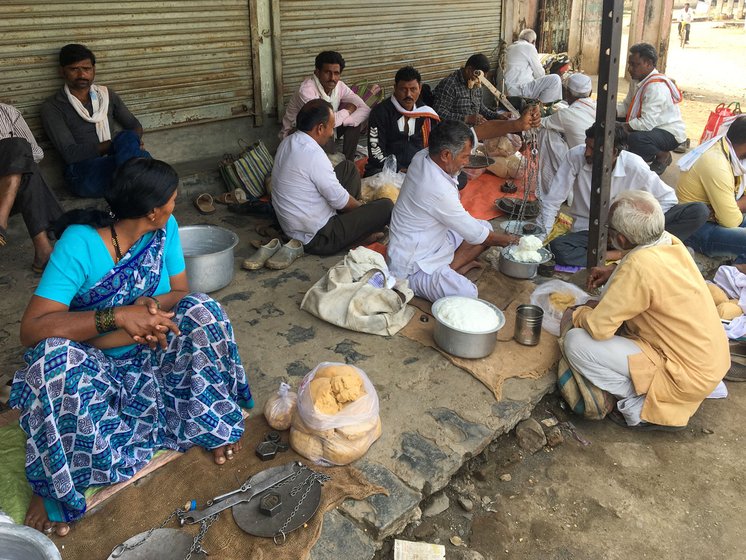 There are about 60 Bharwad settlements in Nagpur district alone, Ramjibhai estimates. “Together, we supply about 1.5 lakh litres of milk from nearly 20,000 cows, every day,” he says. “It is zero today.”

A litre of cow milk fetches the community anything between Rs. 30 and Rs. 40, depending on the fat content and the overall quality of milk. The community’s loss is not just of money in the short-term – it is also a long-term crisis because many milk-cows will go ‘dry’ from not producing milk, he adds.

“The supply of fodder has shrunk and there is no certainty when it will be restored,” Ramjibhai says. Apart from green grass the animals need a variety of nutritious fodder, like oil cakes, for better quality milk yield.

Ramjibhai showed us recent videos of Bharwad community members spilling cans of milk on the streets and into a canal (unverified by PARI). “I’ve been receiving such videos every day from people of my community in different hamlets.”

Watch video: ‘Because of the lockdown, shepherds are in trouble’

In one, a dairy farmer on the outskirts of Dondaicha-Warwade town in Dhule district of north Maharashtra speaks of the sudden financial hit he is facing in the lockdown, because his dairy business has come to a grinding halt.

Others are facing difficulties in their migratory routes. “We decided not to migrate this year,” says Rahul Mafa Jograna, 20. But while he has stayed back in Kalmeshwar, a tehsil town in Nagpur district, his younger brother Ganesh is on the move with his cows, around Ramtek, 60 kilometres from Nagpur, looking for fodder and water.

Ganesh managed to bring a tractor-full of cabbage to feed the cows because the farmers in the villages weren’t allowing the animals to graze on the fields. In mid-March, he had stored dry hay, which lasted a few weeks after the lockdown. Now, a milk-van driver ferries cattle feed from the market to where Ganesh halts with the animals, around Ramtek.

Vikram Jograna, a 23-year-old Bharwad, is out too with his herd of cattle. When we spoke to him, he was in the Parseoni area in north Nagpur district, where the villagers were not permitting them to enter their fields. Usually they would, he says, explaining their long, symbiotic relationship: “Cow dung is manure for the fields, while our cows feed on dried stalks on their farms.”

Vikram has been unable to stay in touch regularly with his family back home in Kalmeshwar because he can’t charge his mobile phone frequently. He says, “This is the hardest time for us.”

Chetana Borkar is a freelance journalist and a fellow at the Centre for People’s Collective, Nagpur.

Other stories by Chetana Borkar