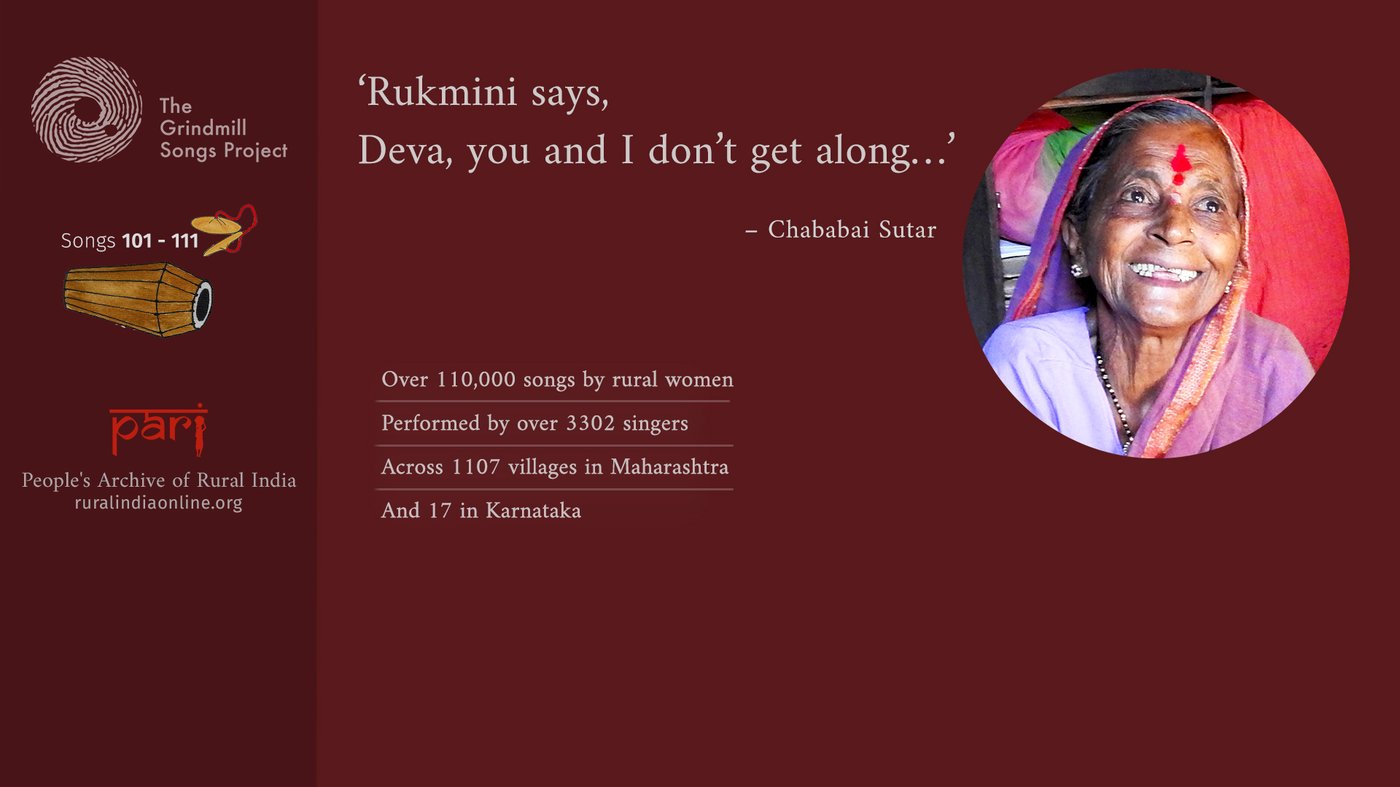 The devotion and the discord

Hausabai Mandekar on audio and Chababai Sutar on video, both from Pune district, sing couplets about the relationship between Vitthal and Rukmini, the deities at Pandharpur, in this edition of the Grindmill Songs Project on PARI. The bi-annual procession of devotees to the temple town is underway this week

Every year in the month of Ashadh (June/ July), a 21-day procession – a wari –   starts from Alandi and Dehu in Pune district to go to Pandharpur, the temple town of Vitthal and Rukmini (or Rakhumai – mai means mother), in Solapur district. A person who goes on this journey year after year is called a warkari, and families across all castes belong to this tradition.

Read more about this journey in PARI’s The pilgrims’ progress and about the poet-saints revered by the warkaris , Dnyaneshwar and Tukaram, in The enduring pull of people’s poets .

Folklore tells us that Vitthal was a pastoral deity. But despite being a people’s god the worship and rituals were in control of the Brahmins and devotees from the underprivileged castes were kept out for many years by the upper castes from the temple in Pandharpur. This changed in 1947 after teacher and writer Pandurang Sane (popularly known as Sane Guruji) went on a 11-day fast to end this discrimination.

Some of the couplets in this edition of the Grindmill Songs Project have elements of devotion, and some describe the temple at Pandharpur. But there are also songs handed down through generations about the conjugal life of Vitthal and Rukmini as they lived with each other – in the imagination of the singers.

When the Grindmill Songs Project Team from PARI visited Lawarde village on April 30, 2017, in Mulshi taluka of Pune district, Chababai Sutar sang songs about the love as well as discord between Vitthal and Rukmini.

Watch video: 'Rukmini says...You must build another temple for the abir bukka,' sings Chababai Sutar about a spat between Vitthal and Rakhumai

In the Pandharpur temple, the two dieties Vitthal and Rakhumai, have separate shrines. While there are legendary stories about this, Chababai foregrounds a  simple reason – in one ovi , Rukmini says to Vitthal, “Deva, we don’t get along. You must build another temple for the abir bukka. ” Abir or gulal , is orange in colour and bukka is a black powder that devotees offer Vitthal. Rakhumai cannot bear the constant dust of these fragrant powders.

The ovi featured here also include 11 songs by Hausabai Mandekar from Savindane village in Shirur taluka of Pune district. These audio clips were recorded on December 13, 1995.

Hausabai sings that Vitthal is standing on a brick and only he knows the depth of the river Chandrabhaga. Folklore tells us that Pundalik was devoted to his old parents. Impressed by his devotion, when god visited him, the young man was busy in the service of his parents. He placed a brick and asked Vitthal to wait on it till he was free. The temple in Pandharpur thus has Vitthal standing on a brick, arms akimbo, waiting for Pundalik.

The singer says that the first step to the temple is for Namdev (a poet-saint of the 13th century) and before going to the shrine of Vitthal, she visits the pillar dedicated to the eagle (the vehicle of Lord Vishnu) the Garud Khamb. Her first visit to Pandharpur was with her brother and before Vitthal, she went to the shrine of the devotee Pundalik. She stands in the long queue for a view of the diety and says that Vitthal has to now worry about when it would be her turn to glance at the idol. 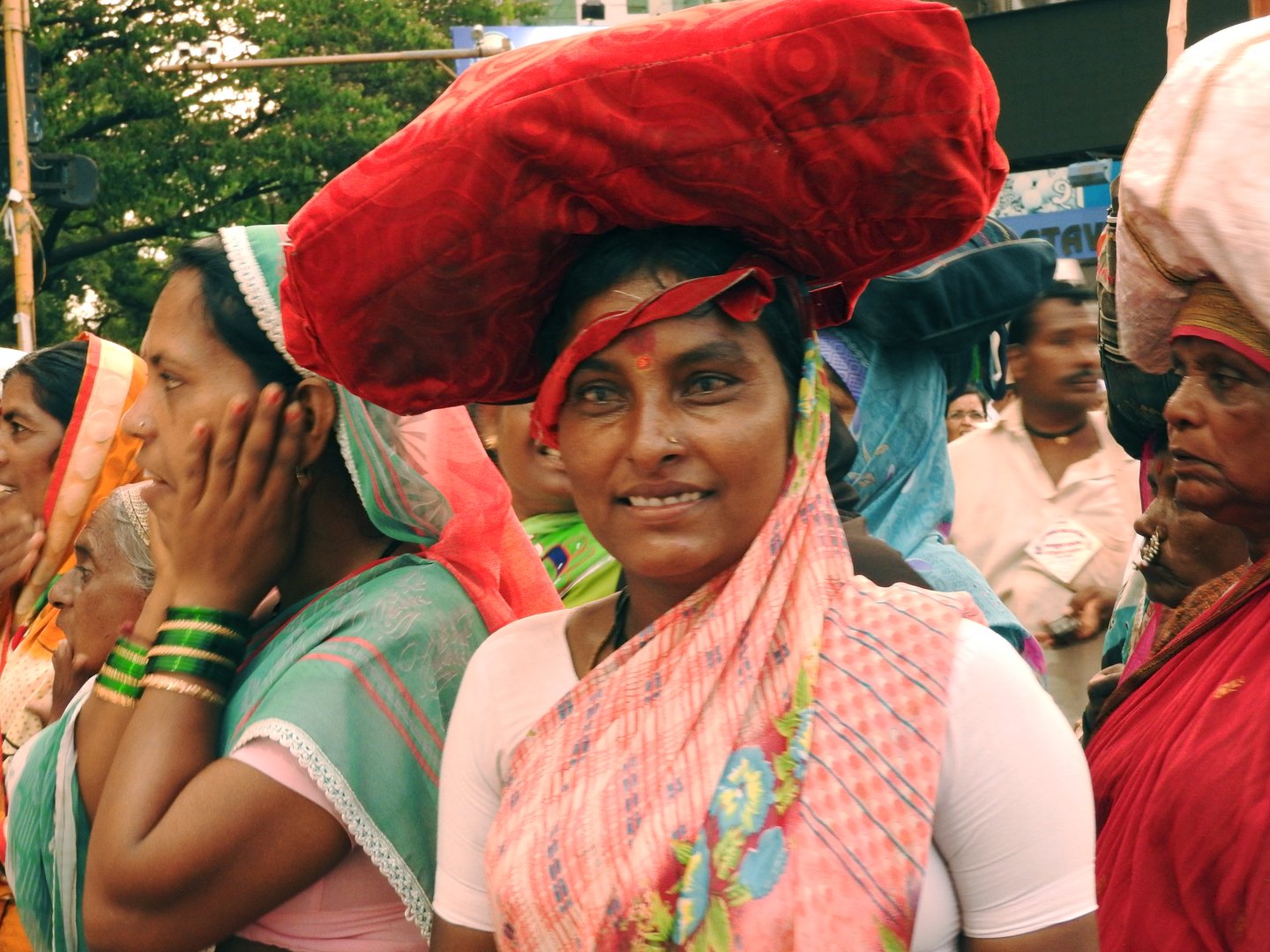 A warkari on her way to Pandharpur, walking through Pune on June 18, 2017

The next four couplets are about the love and discord between the couple. Rukmini’s anger is so intense that Vitthal gets cold water instead of hot for his bath. She goes away to sulk near the pond and her beloved Pandurang puts an arm around her to conciliate her. One night, when Rukmini is sulking, there is panic about Vitthal’s meal. Another night, there is revelry in the dark with several women while the oil lamps burn all night in Rakhmabai’s temple.

The last three verses are about the three main consorts of Vitthal as Lord Krishna. Vitthal is considered to be an avatar of Lords Vishnu and Krishna. Rukmini, who has the honour of being the first among the many wives, wears a fine and expensive sari and blouse; Satyabhama is second and gets an ordinary and plain sari. Tulasibai, the holy basil plant, who, come rain or sun, stands selflessly outside the home and temple, gets the cool and clear water of the canal.

I went to Pandharpur, the first step is Namdev’s
Before Vitthal, I visit the Garud Khamb [pillar]*

I went to Pandhari, I stood in the queue
Hari [god] is worried about my turn for darshan [view]

Rukmini is upset, her anger is bad
God Vitthal gets cold water for his bath

Rukmini is sulking, she goes and sits near the pond
Her beloved Pandurang puts his arm around her

Once, Rukmini was sulking one night
There was panic about God Vitthal’s meal

There was revelry in the dark with sixteen-seventeen women
In Rakhmabai’s temple, oil lamps were burning

A fine sari and blouse for Rukmini, an ordinary sari for Satyabhama
The coolness of cool water for Tulasibai

An expensive sari and blouse for Rukmini, a plain sari for Satyabhama
Clear water from the canal for Tulasibai

A fine sari and blouse for Rukmini, a coarse sari is for Satyabhama
Tulasi standing in the rain in front of the door, she has nothing

Notes: *Garud Khamb:  The eagle’s ( garud ) pillar in the Pandharpur temple complex; the eagle is the vehicle of Vitthal (Lord Vishnu). 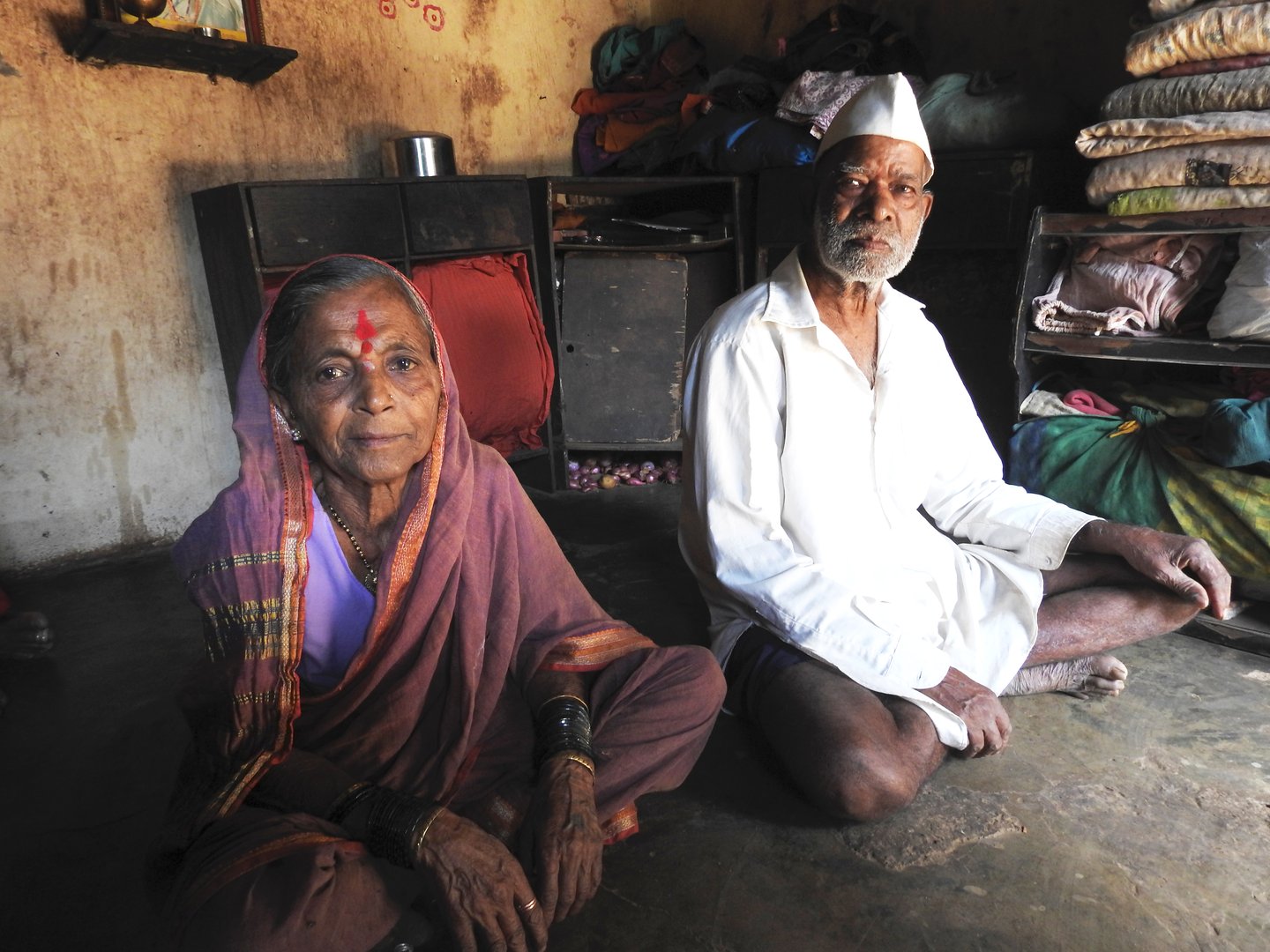 Chababai Sutar and her husband Gopal in their home in Lawarde village, Mulshi taluka, Pune. Photo taken on April 30, 2017

Date: These songs and some of the information were recorded on December 13, 1995. The video and photos of Chababai Sutar are from April 30, 2017.