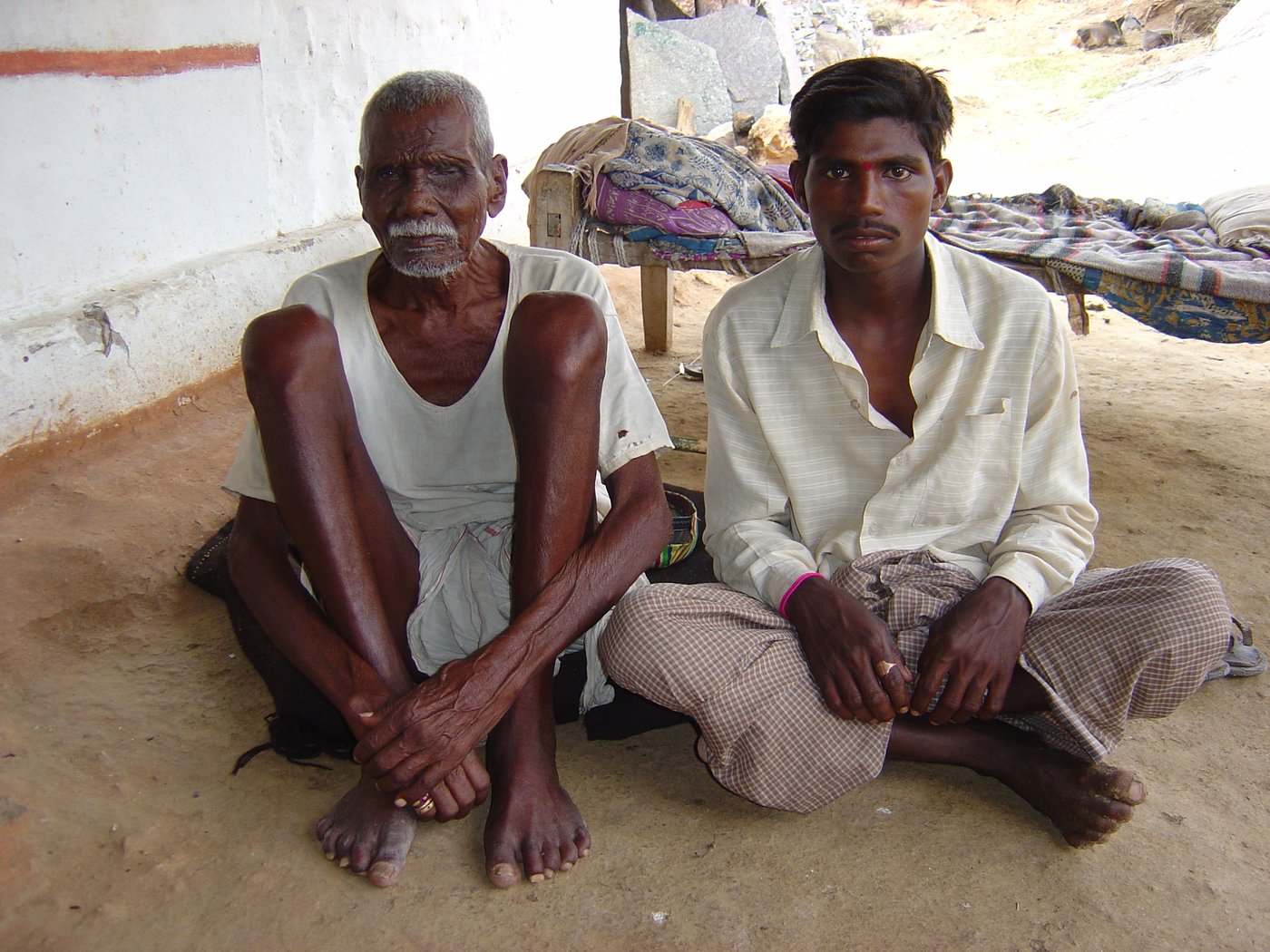 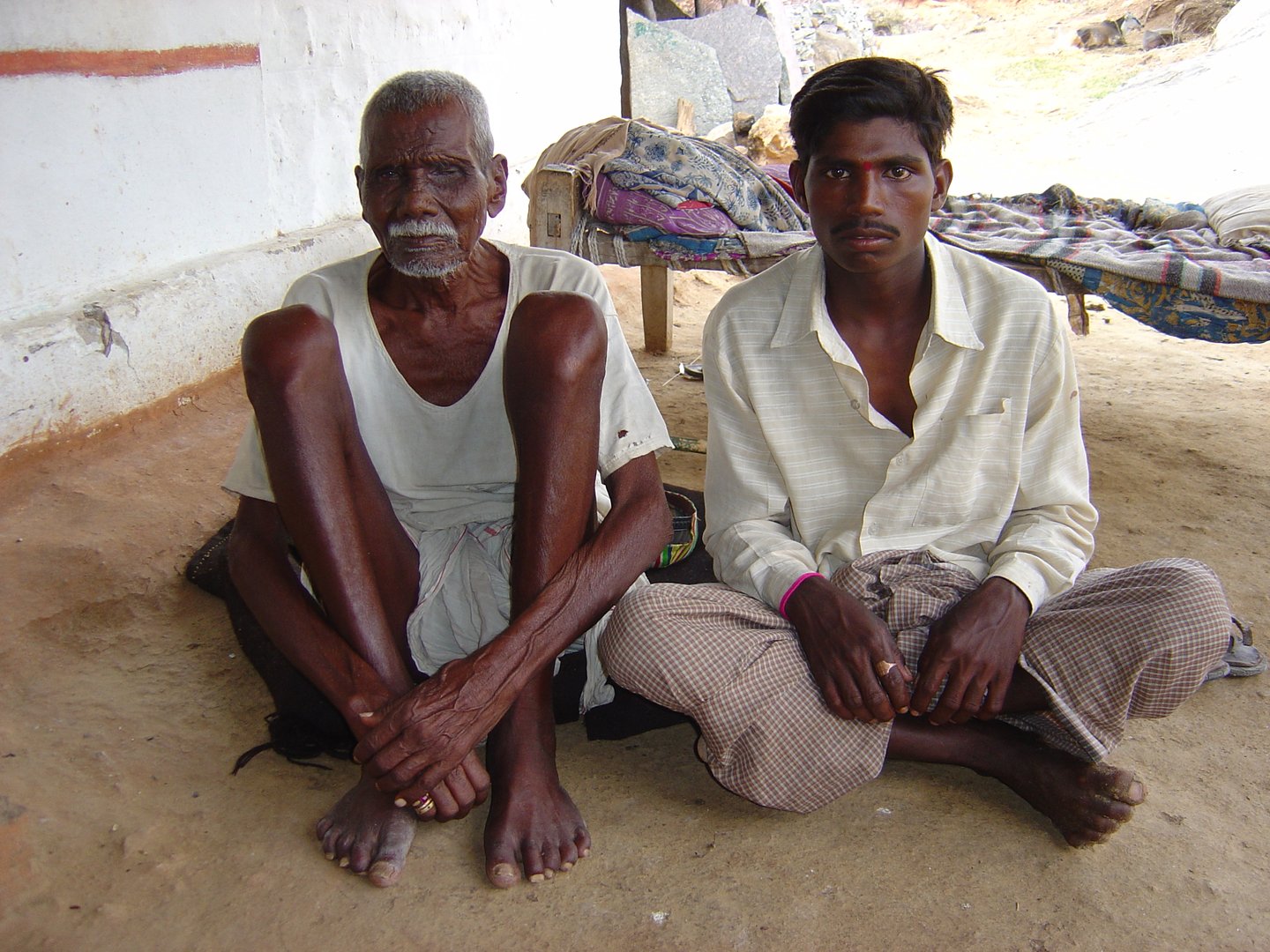 Kathulappa with his grandson Narasimhulu. No post-mortem examination was done when his son Chinna Saianna took his own life in December, 2003. They could not afford it.

A Kathulappa wants to talk to us about his son, Chinna Saianna, but cannot. Tears fill the old man's eyes each time he tries. So he turns to his grandson Narasimhulu to have him tell us the story. It is not much different from that of hundreds of other farmers who have committed suicide in Andhra Pradesh. With one twist in the tale.

This family's chance of getting any compensation is bleak. No post-mortem examination was done last December when Saianna took his own life in Jengarala in Mahbubnagar district. Which means they cannot now establish suicide as the cause of death.

It was not done because they could not afford it. And there are many such households that did not get post-mortems done. Some, for sentimental reasons. Others, because it costs too much.

In most places, `post-mortem' (Latin for `after death') is taken to mean the autopsy or examination of a body after demise.

That is, to help determine the cause of death. In much of rural Andhra, it means a heap of other things. It is a thriving after-death industry.

It means, for instance, "you have to pay the police, the doctor, the orderly, the man who drives the body to the hospital," says G. Shekhar in Jengarala. Seeing us struggle with this, he laughs: "Surprised? When even getting the simplest signature from an official costs Rs.50, did you think this would come free?"

In theory, yes. There is no charge for a post-mortem. But people do end up paying.

Most of the households hit by suicides that we surveyed across six districts had forked out money for this.

Many had spent around Rs.5,000. Several had shelled out much more. Some had ended up losing as much as Rs.10,000 on the process.

"It is illegal. It is also heartless to torment people already in grief and so deep in debt," says Dr. M. Geyanand. A medical practitioner in Anantapur, he points out that: "One in the family has just killed himself because of debt. Then comes this pressure to incur more of it." Many of those who paid speak freely of the sums spent on the different actors. But are cagey when it comes to saying what they paid the police. Typically, the man driving the jeep with the body to the post-mortem venue got Rs.2,000. The police took between that and Rs.3,000. The `orderly' or attender got Rs.1,000. And the doctor's charge varied from nothing to Rs.2,000.

"A cost of Rs.6,000 is guaranteed," says Shekhar in Jengarala. Even where it is less, it is still a burden for families drowning in debt.

"The thing is meant to be entirely free," says a disgusted Dr. Desam Sreenivasa Reddy in Kalyandurg, Anantapur.

"In any case, the role of the doctor is next to nil. The attender does most of the work. He cuts open the body. He dictates what he has found and the doctor merely takes notes. Few will do that attender's job. In one case, a man who had been transferred on promotion was held back because there was no one else to do this work."

However, it is not just the farmers' suicides that see post-mortem problems.

As Dr. Reddy says: "When it's a medico-legal case, the pressures become intense. And the role of some of the forensic people is terrible. What happens if you call a murder a murder and it upsets somebody really powerful? Those involved can and will be bullied to fix the result.

There have been controversies over a couple of exhumations, too. Their final verdict is in doubt.

At some point down the line, people begin to wonder: why fight and get into trouble? Why not just take the money? This logic of `why not make some money' has now extended to the suicides as well."

"All that, however," say Dr. Reddy and Dr. Geyanand, "in no way justifies this extortion. Nor the harassment of those unable to resist."

Both doctors are with the Jana Vignyana Vedika, a body that aims to promote popular science and the scientific temper. The JVV, of which Dr. Geyanand is State president, has been active in tracking many aspects of the ongoing agrarian crisis.

The after-death business is widespread. The family of Duggala Mallappa in Anantapur spent close to Rs.10,000 after his death.

In the case of Gobaribai, whose husband Kamali Nayak committed suicide in Vajrakarur, it cost Rs.6,000. "We raised it through a chanda [contribution] from all our friends," says this Adivasi family. It was over Rs.3,000 for the extremely poor Dalit family of Pandhi Posaiah who took his life in Chinnarevali in Mahbubnagar. All Posaiah's sons are bonded labourers. They took the money on loan.

Adding to the debt

In Akapur, Nizamabad, the family of Ponnala Hanumantha Reddy borrowed Rs.5,000 for this. They are already Rs.5 lakh in debt.

There were some families that escaped without paying anything. Like those of Dasari Mahendru in Anantapur and Sangolla Narasimhulu in Medak who spent nothing. And where the usual actors were more sensitive. But these were not many. In the case of Mahendru, neighbours joked that "even the police found nothing to squeeze here."

But it is the families that did not seek a post-mortem who today face more trouble. How do they now prove it was a suicide? "This is a huge problem," says Dr. Reddy.

"How will they get their compensation if they cannot prove it?" More so if the death occurred a while ago.

The family of Prathap Reddy in Chelmada who killed himself in May 2003 in Medak now wishes they had sought one.

"They simply did not have the money at the time," says a neighbour. It is also what Kathulappa is trying to tell us in Jengarala. His tears are now on his cheeks.

For many in the crisis here, death does not come as the end. Just as the beginning of a new burden for their families.